The main US indexes all saw net weekly declines, ranging from -1.5% (Trans) to -2.3% (Dow). Equity bears merely need a subsequent close under the weekly 10MA, which will open the door to a full retrace, back to the early Feb' low of sp'1737. 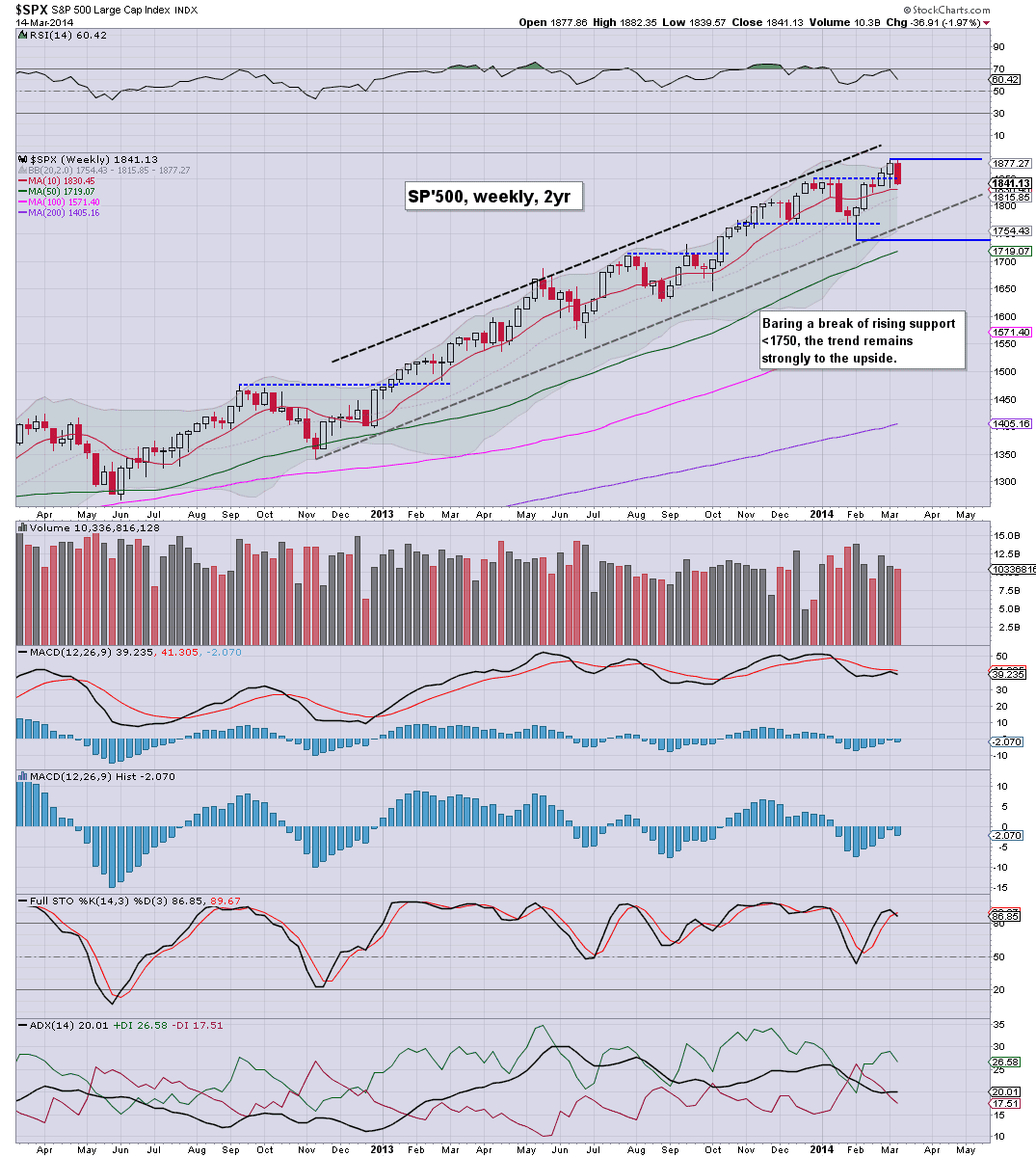 The sp' fell around -2% this week, and the weekly decline is a provisional warning of trouble. The 10MA of 1830 remains a key level, Indeed, not only on the weekly charts, but especially the daily cycle. We have a key cycle low of 1834, and the 50 day MA is lurking around 1830.

Any break <1830 will open the door for a market decline to the lower weekly bollinger, currently 1754..and slowly rising. Underlying MACD (blue bar histogram) cycle remains negative, with the weekly full stochastic now rolling over.

To be clear, if the market does get upset (not least about the Ukrainian situation), there is high opportunity for a full retrace back to the low 1700s. That in itself would offer a bigger H/S formation, with much greater downside in the summer. 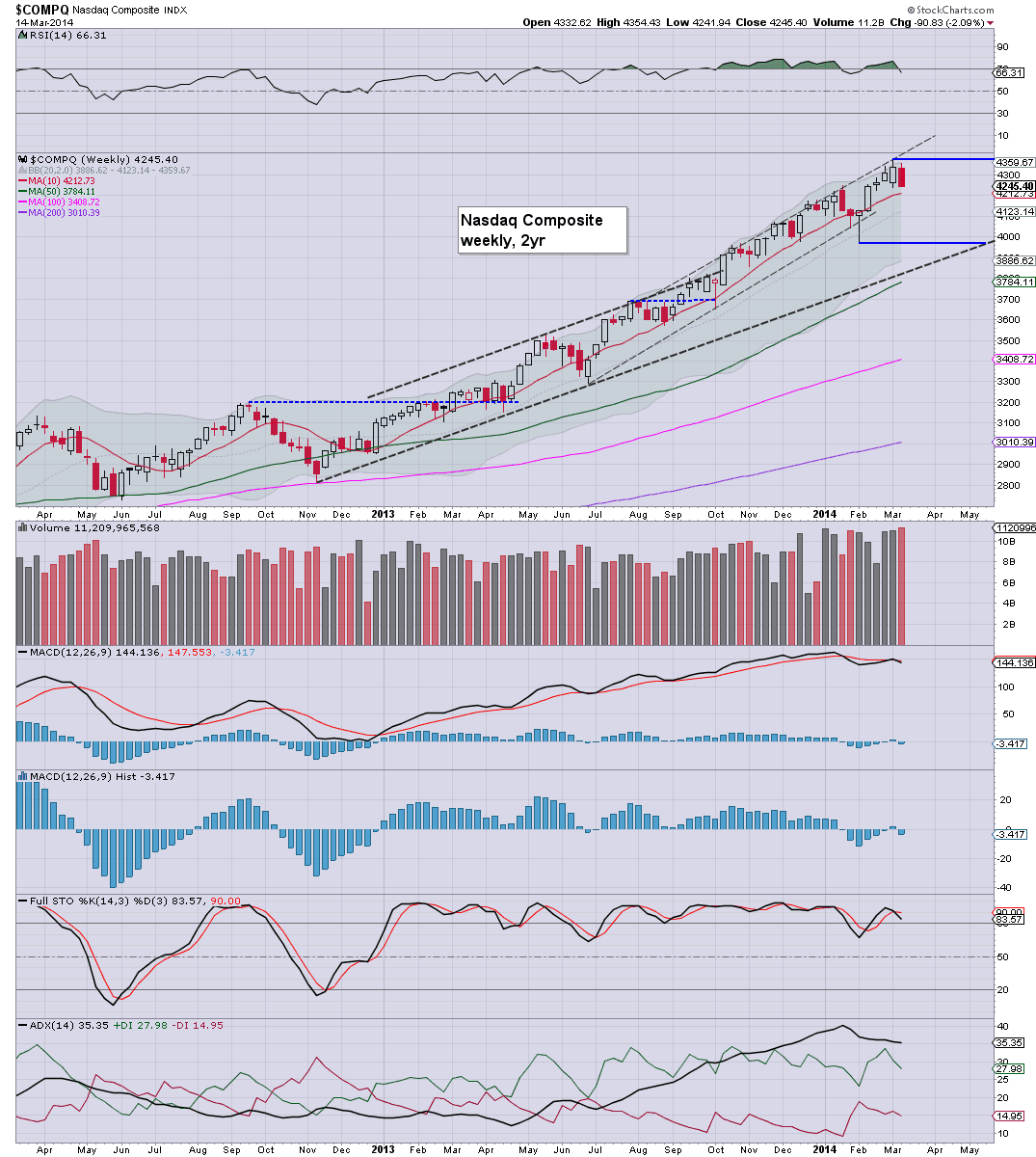 The tech slipped -2.1%, but managed to hold above the weekly 10MA of 4212. Clearly, the primary trend is still to the upside, but a weekly close <4200 would probably be decisive enough to open up a return to the early Feb low in the 4000s. Of course, that is only 5% lower, not exactly a huge decline. 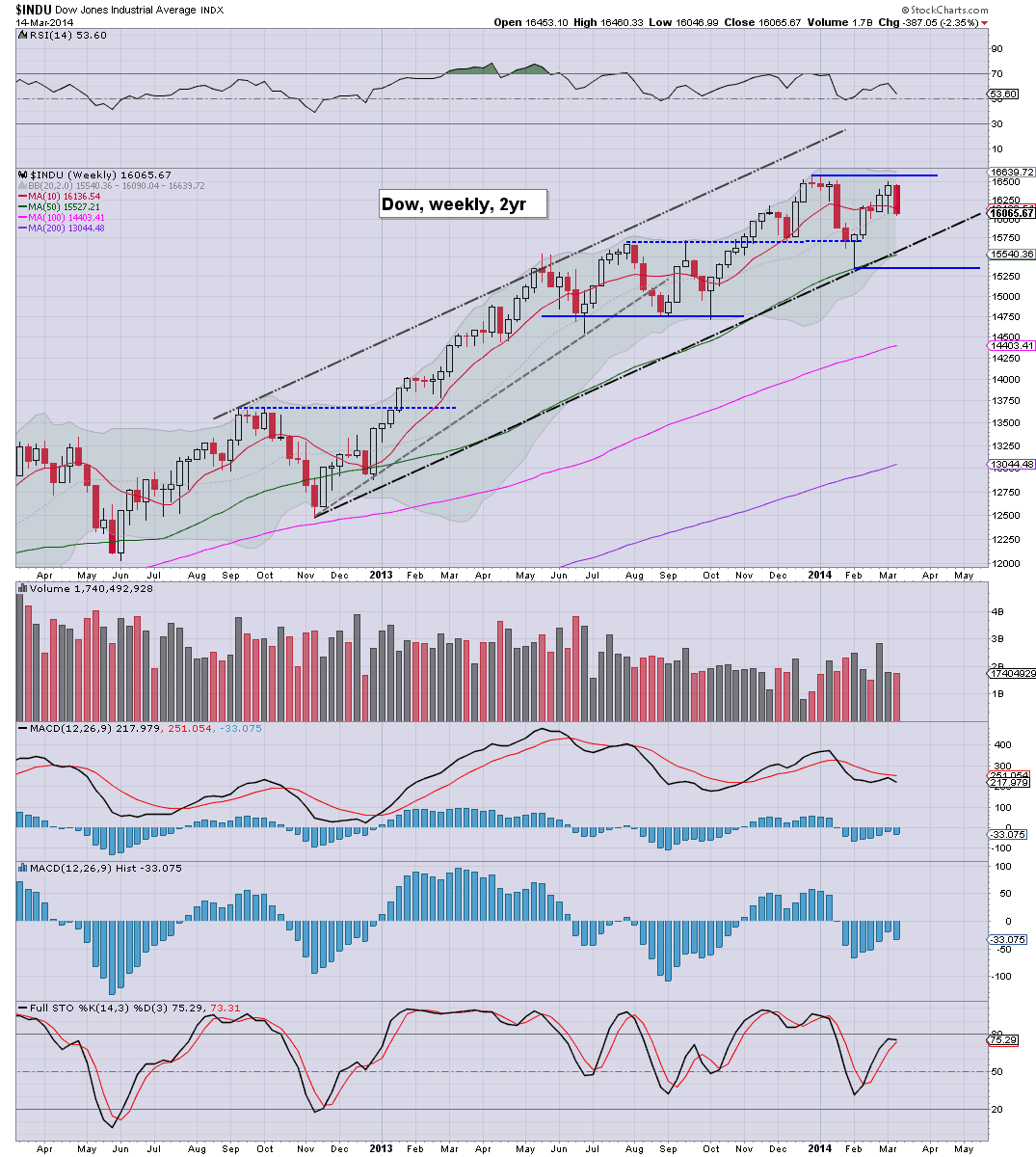 The mighty Dow fell -2.3%, and although it held the 16k psy level, it failed to hold the 10MA. The Dow remains notable in that it was the only index (of the six I regularly highlight) that did not break a new high.

Best case summer downside remains 14000/13500. The 12000s look highly improbable, no matter how upset the market might get about any particular geo-political issue. 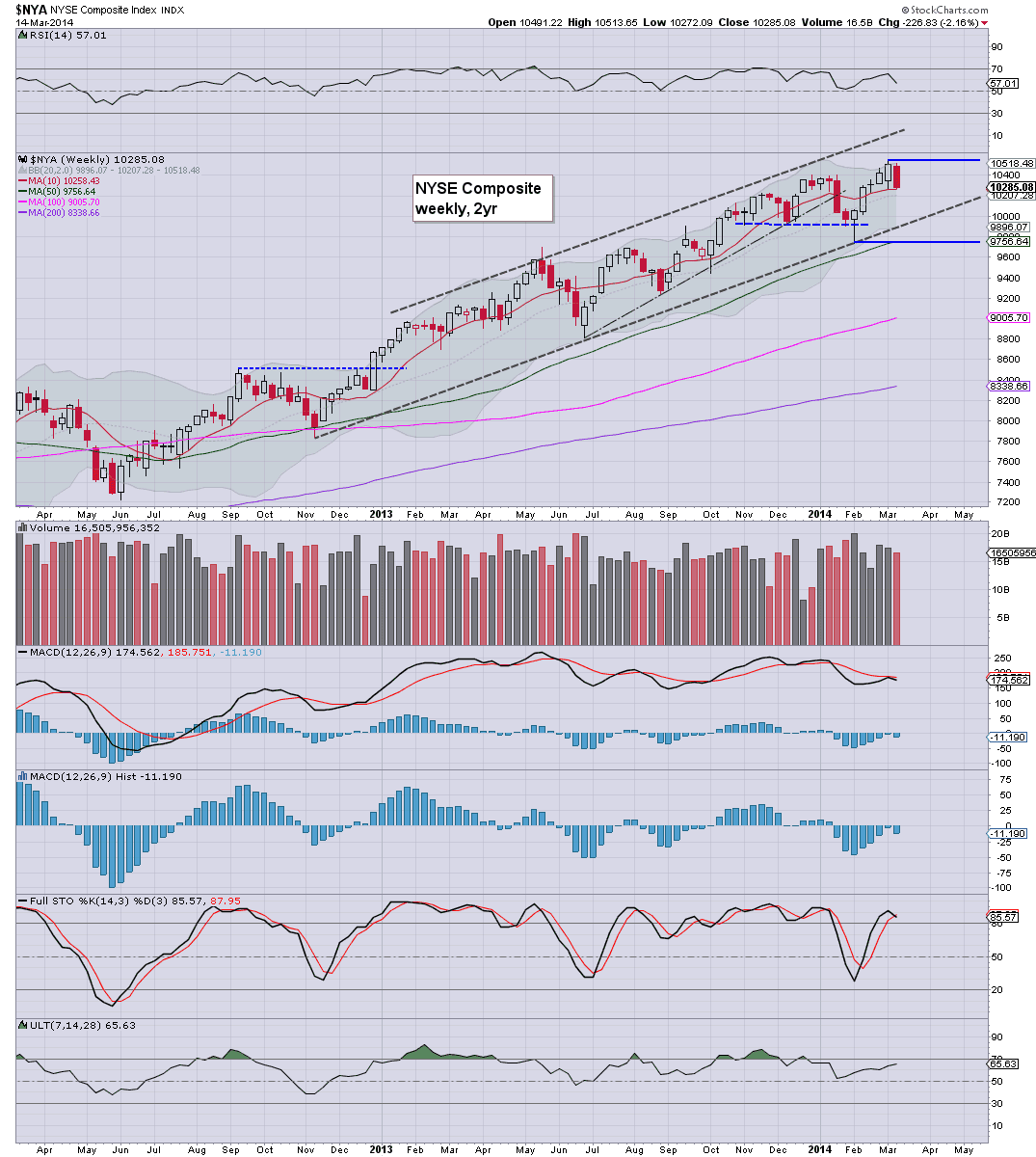 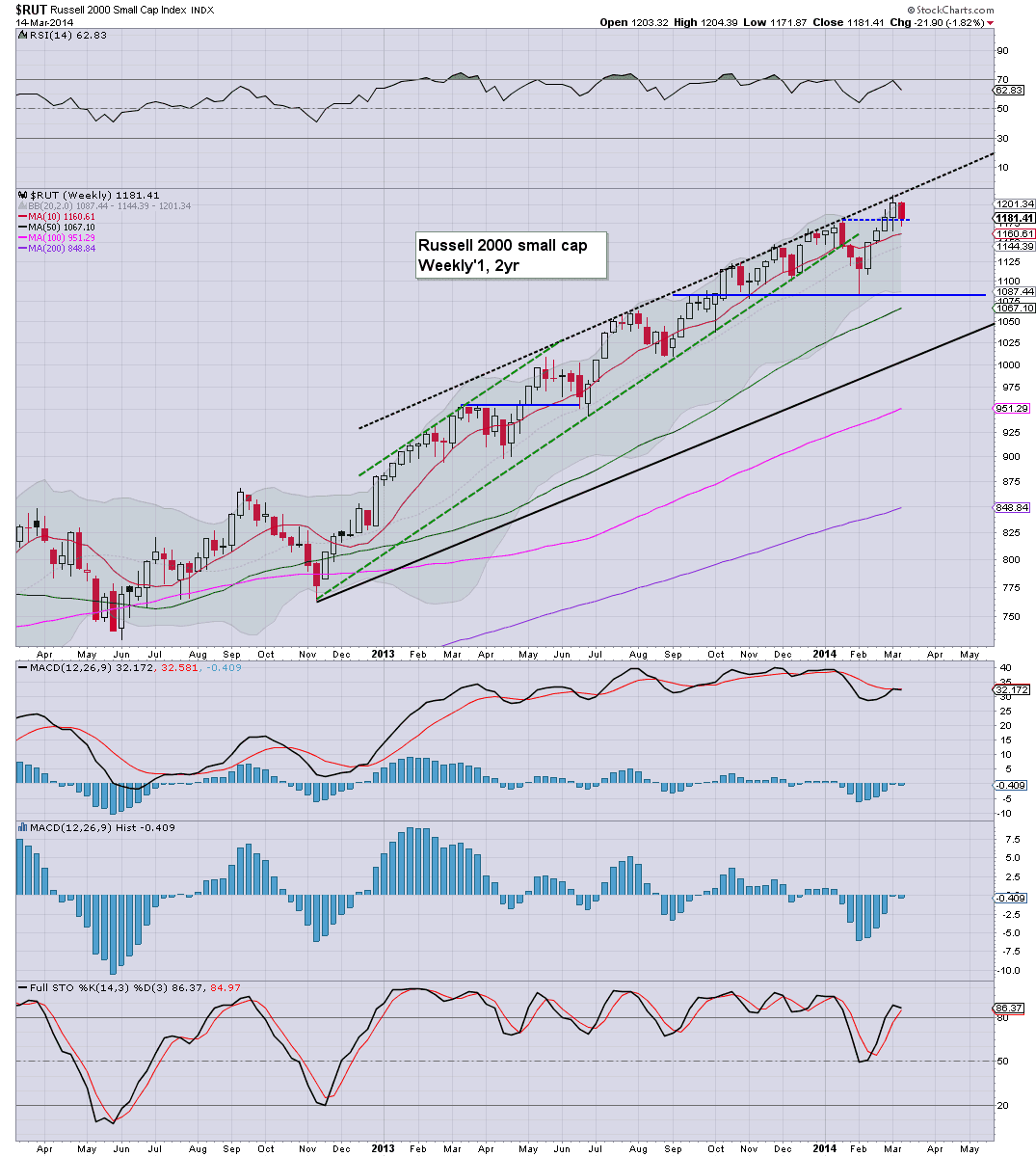 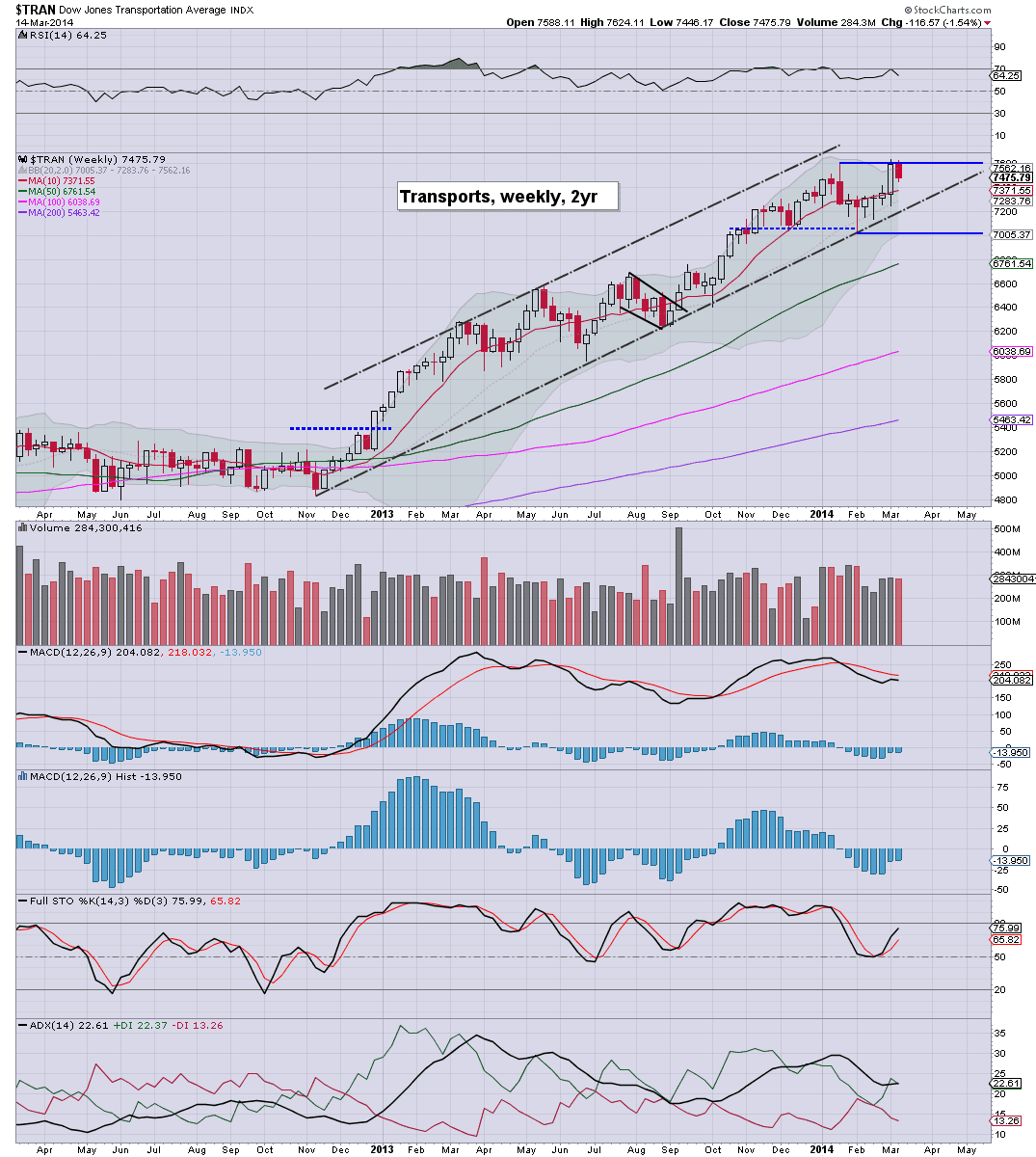 The 'old leader' held up better than any other index this week, falling just -1.5%. First downside target for the bears should be the 7k threshold. Any break below there will open up 6700/6600s, although that does look difficult to achieve.

So, we have all the main indexes with weekly declines. Perhaps most notable is that whilst the other indexes broke new highs last week, the Dow remains weak, and did not match the new highs seen in the Transports.

There are other reasons why I'm also open to a break under the Feb' low. Suffice to say, any break <1700 should be enough to clarify than an intermediate top - from the Oct'2011 wave, has occurred.

The week begins with Empire state, indust' prod', and housing data. Tues' will see CPI and housing starts. However, next week will really be about two things...the ongoing situation between Russia/Ukraine, and the FOMC.

The FOMC announcement is due Wed' 2pm. Most expect (as do I), QE-taper'3 of $10bn, reducing monthly QE to $55bn a month, beginning March'31st. Yellen is due to do a press conf' shortly after the announcement.

Friday is quad-opex, and thus some considerable price chop is likely.

Having resigned myself to 'broad upside into spring 2014', I've not traded the market on the short side since last summer. There are a fair few reasons why the current price action is suggestive that not only is the current multi-week up wave complete, but that the grand wave from Oct'2011 is also complete - at sp'1883.

Best case for the bears is a H/S formation, with a neckline of 1834. However, I don't get particular if we fall a few points above/below that neckline. The Friday low of 1839 could be the wave low from 1883, and if we rally from the Monday open, I'll change the neckline to slightly upward sloping. 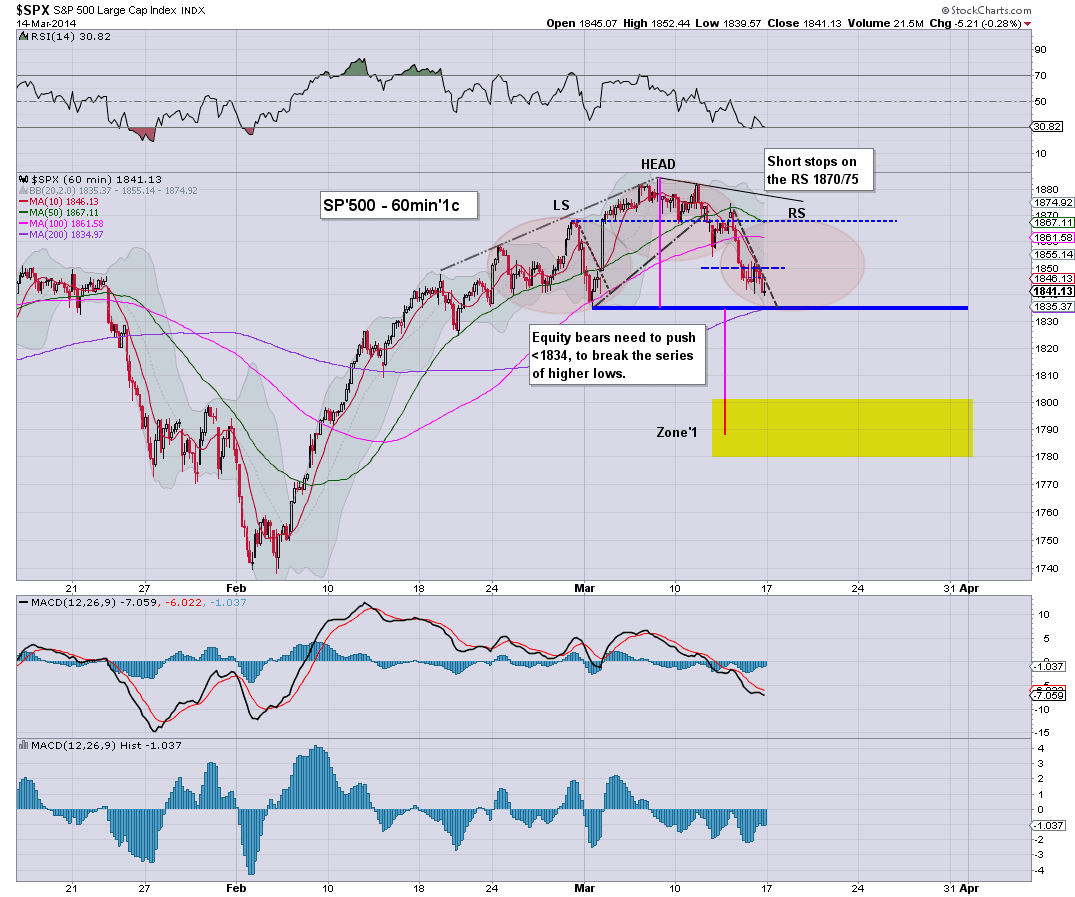 If that is the scenario we're dealing with, the bears should be on the rampage by the end of next week, and into end month. Once we break <1830, the door will be wide open to a return to the Feb' low, perhaps even the upper 1600s.

So..I sit here waiting...with just 3 days to go, having been counting the days since last summer. If I do launch a major short, it will very likely be soon after the FOMC announcement. I am hoping for a brief spike higher, somewhere in the 1865/75 zone. I plan to short the indexes, with short-stops in the 1880s. If I'm wrong, I'll get the boot relatively quickly, for a tolerable loss.

As ever, I appreciate hearing from any of you, especially if you have other scenario ideas.

Back on Monday :)
Posted by Trading Sunset at 16:00:00
Email ThisBlogThis!Share to TwitterShare to FacebookShare to Pinterest

With the market swinging from sp'1882 on Tuesday, to the Friday close of 1841, the bears have achieved an important provisional warning on the weekly index cycles. The blue candle on the 'rainbow' chart should not be dismissed lightly. Bulls...beware! 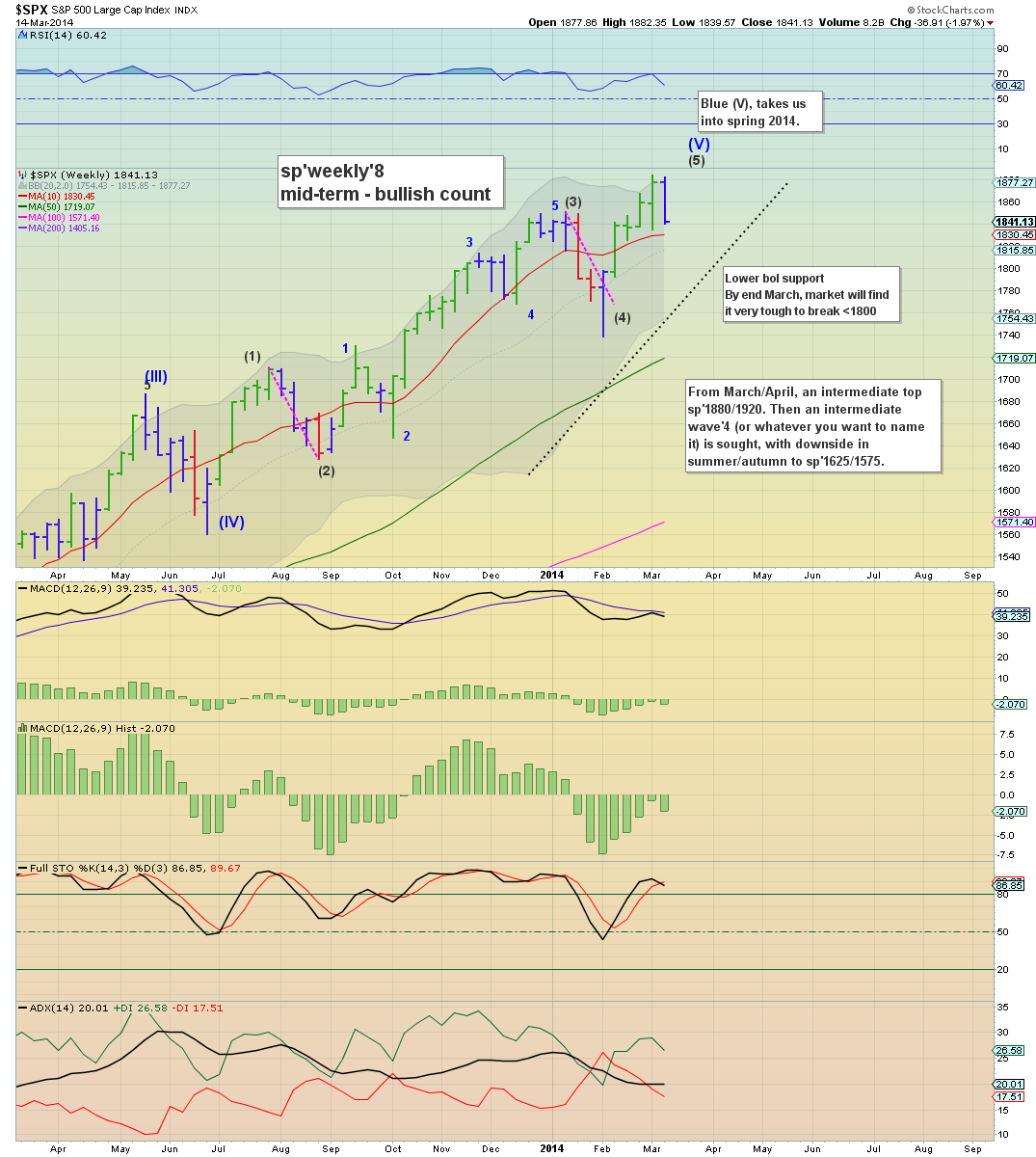 The obvious question is...was the high last Friday (monthly jobs data) of sp'1883, a key multi-month high? Even if it was, we will need a number of things to occur to be sure of an intermediate top, not least of which is breaking the Feb' low of 1737. That of course is a long way down, and sure won't be easy.

What is clear, any break <1700, will unquestionably confirm that an intermediate cycle high has occurred.

The following is one of a number of scenarios I will be keeping in mind across the coming few weeks and months. Certainly, I hold to a broader downside target of 1625/1575. 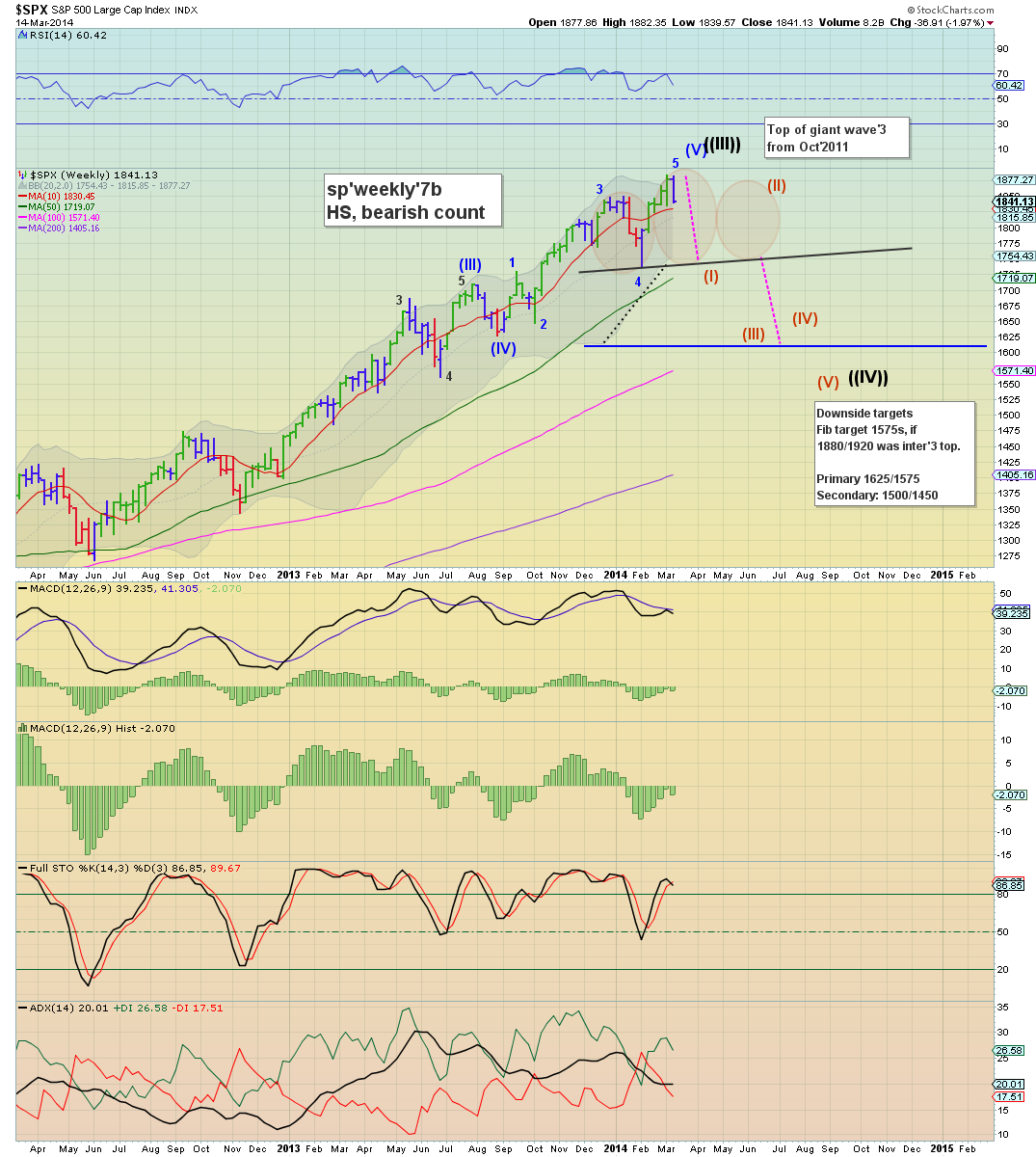 --
It was an interesting week, I have high hopes next week will be not only more entertaining (although surpassing the PLUG hysteria won't be easy), but also very profitable for those bears that haven't yet been ground into dust since Oct'2011.

Goodnight from London
-
*the weekend update will be on the US weekly indexes
Posted by Trading Sunset at 03:00:00
Email ThisBlogThis!Share to TwitterShare to FacebookShare to Pinterest 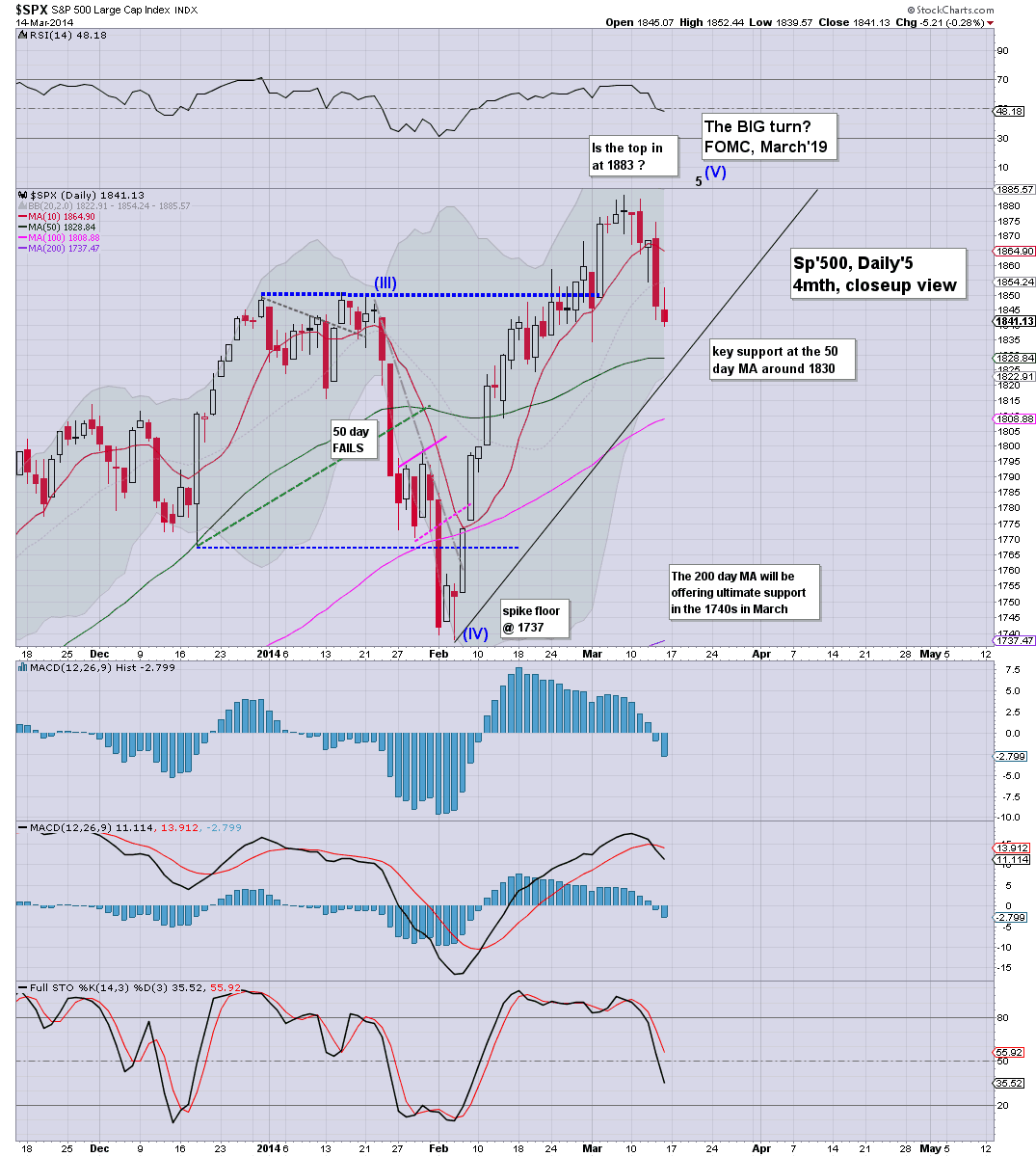 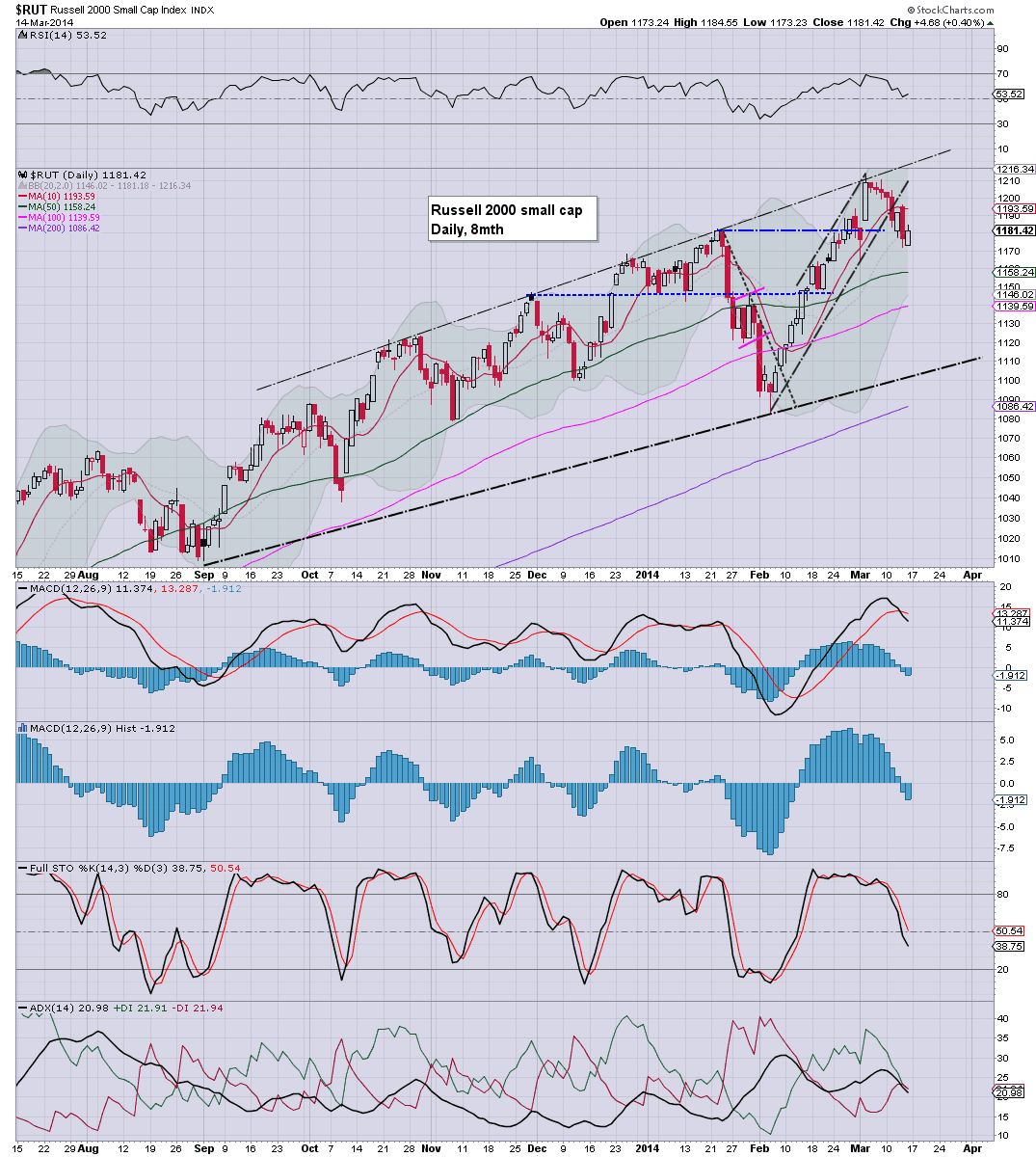 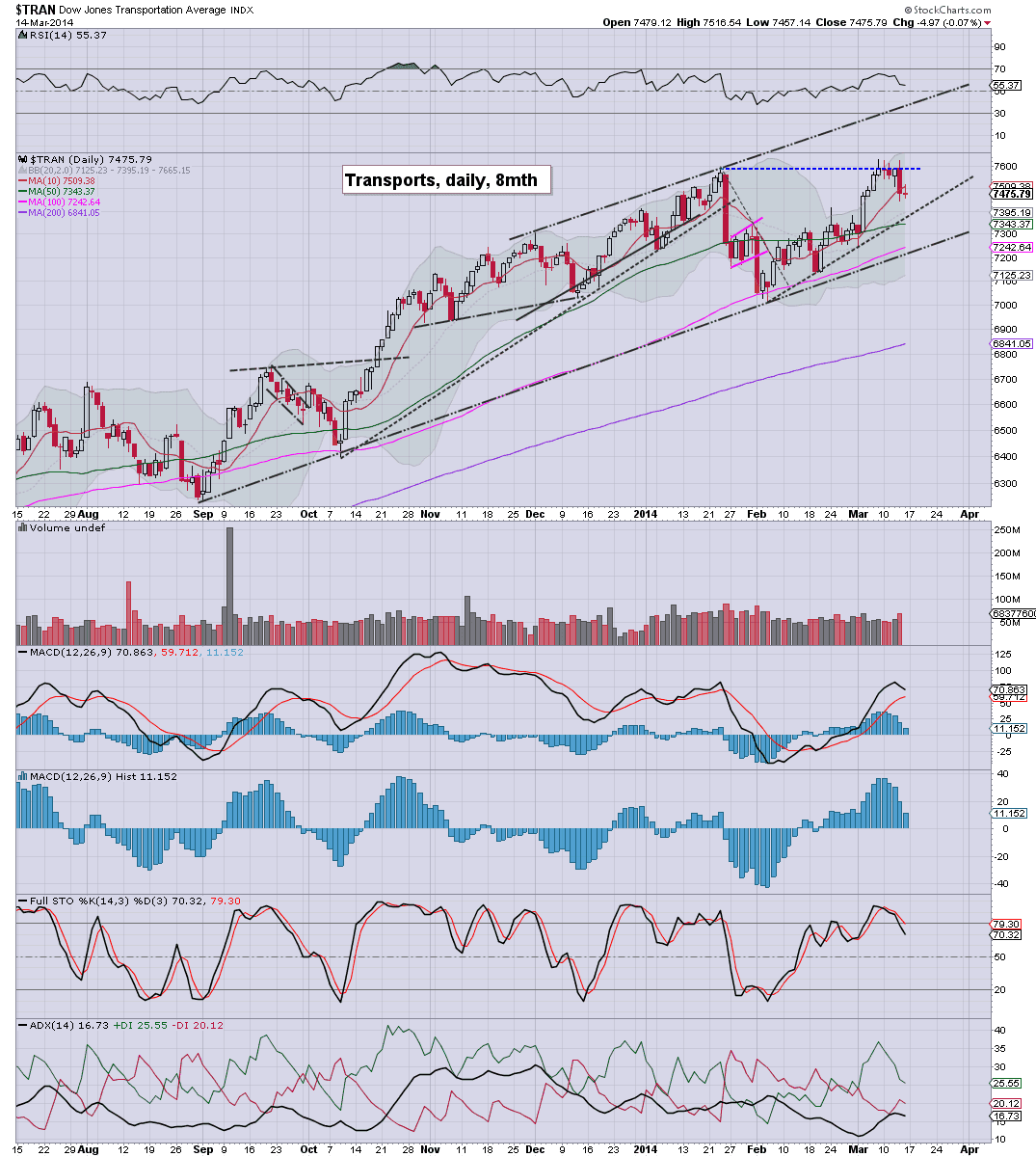 It remains highly viable that a multi-month high has now been put in at sp'1883, with R2K 1212.  First key target for equity bears this spring should be the Feb' low of sp'1737. If that low is taken out, it will decisively break the 200 day MA, and with a lower low...a key intermediate top can be discerned.
--

Certainly, trading volume looks set to increase in the months ahead, and based on the past few years, that means we're likely headed lower.
--
a little more later...
Posted by Trading Sunset at 00:00:00
Email ThisBlogThis!Share to TwitterShare to FacebookShare to Pinterest
Newer Posts Older Posts Home
Subscribe to: Posts (Atom)