An interesting day - a reversal day for the Rus'2000 index, although other indexes still closed moderately green. Okay, there is a lot to pick from today, but hopefully the following charts will give a good outline of where we are, and where we might be headed. 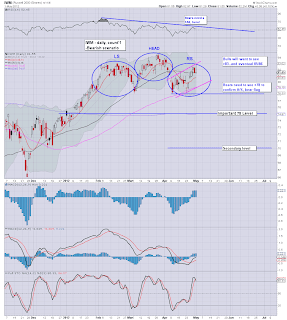 I like this IWM chart, it remains the last real bearish daily chart out there. Are we really in a giant H/S formation? Is this bear flag really just shaking out ALL the weak bear hands, and only then will we see a minor wave'3 to the downside? From a cycle view, we are getting real exhausted on this latest up move. 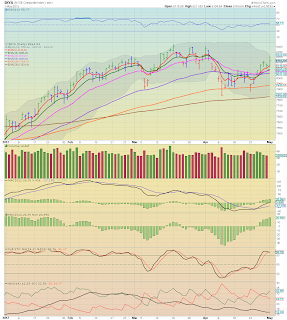 The broader NYSE index, there is nothing bearish here. MACD cycle remains entirely bullish, even though we closed well off the intra-day highs. 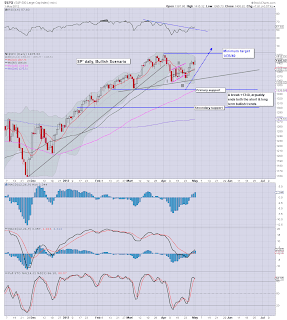 Not much to say about this scenario. The current trend is still broadly UP, a good stop would be around the 1395/90 level..or lose..around 1380. From a cycle perspective, the MACD has cycled up quite a way now, so..it could be said its due for a down move. 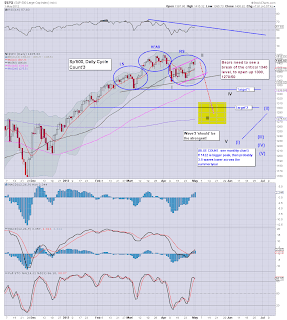 The SP' bearish chart was arguably busted over today, although it did close within the bear flag. Only with a break under 1357 can the pattern be preliminarily said to be 'possibly' correct. A move under 1340 would be the first decent bearish move since last November. 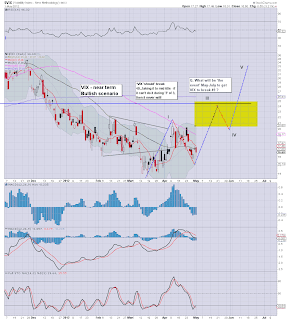 Despite this mornings short-stop 'ramp from hell', the VIX did not make new lows, and even started to crawl back up as the indexes rolled over. The first target remains 21, then a move to 24.

Its been said so many times before, but tomorrow will be important for those looking for major downside. The levels are absolutely clear. Bears need to see a lower low put in, so...look for a break under 1395/90..preferably..something in the mid 1380s. Even then, bears need to see much levels  - 1357, 1340, and even 1300 to confirm the bigger patterns/theories.

We have ADP jobs data tomorrow morning (8.15am EST), so the market could easily gap higher..or lower. It will be certainly be important to see how the market reacts to this data.

A little more later in the evening.
Posted by Trading Sunset at 23:00:00
Email ThisBlogThis!Share to TwitterShare to FacebookShare to Pinterest

A very interesting closing hour. The hourly cycle indeed rolled over, and even though most indexes still closed green, we put in a nice spike/failed rally candle on the daily cycles (more on that later). Even the VIX showed a hint of a turn higher. 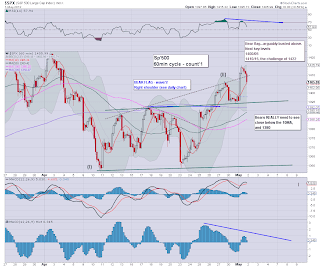 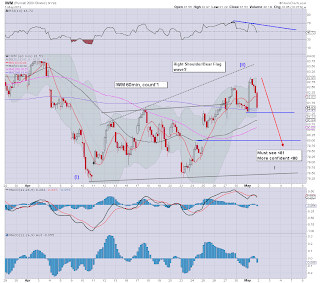 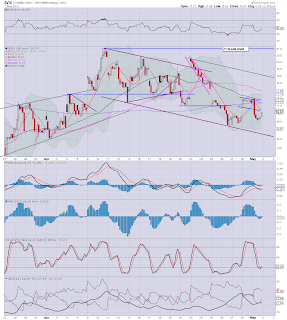 We closed the day with a hint of something potentially interesting happening tomorrow. From a cycle perspective, we could in theory trundle lower across most of Wednesday - and put in a lower low - aka.. <1395. However, bears will need a real sell-off, with good volume to break the 1390/95 level.  Similarly, we'll need to see VIX break back into the 18s/19s, otherwise any down cycle just won't amount to much.

More on the daily cycles, later this evening.
Posted by Trading Sunset at 21:04:00
Email ThisBlogThis!Share to TwitterShare to FacebookShare to Pinterest

The hourly cycles are clearly rolling over (from the MACD perspective), although in terms of price decline, its still a very minor fall so far. 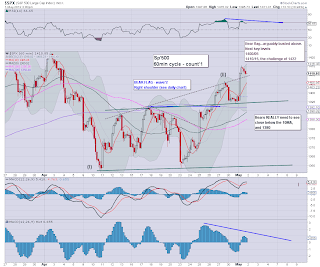 I'd guess people could in theory re-short here, with a stop at today's high of 1415, but we could just as easily gap up tomorrow. We have the ADP jobs data at 8.30am, and if the market decides that's a 'nice' number, we'll probably gap up 0.75/1.00% - taking out anyone who went short today.

Bolivian Gov't have decided to seize, aka..steal, aka...the communistic pigs have decided they'd now like to own someones Power Distribution company. I guess you could say they are following in the steps of Argentina who stole a large part of YPF a few weeks ago.

The ironic aspect is that the company the Bolivians have taken is...also largely Spanish owned. Those Spanish sure are starting to have a run of bad luck lately.

This mornings post-ISM rally seems to have peaked around sp'1415 , a mere 7pts below the recent high. Although the dow did already hit a new high, roughly equivalent to sp'1424/26. VIX remains weak, no sign of a floor. 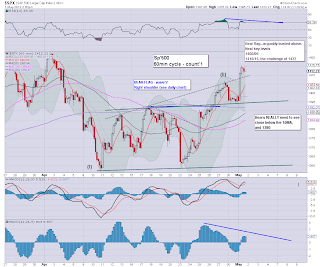 Only a break under 1395 would be qualify as an initial bearish signal, and it certainly would be a good stop-loss level for existing/new long positions. 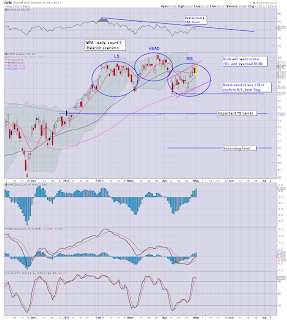 The SP bearish H/S chart is arguably busted already, however the IWM version - is hanging in there..just. Bears need a break under the 10MA - a touch under 81 for any near term hope of downside. Bulls need a break above 83 - which we have come very close to breaking today.

Nothing bearish in the immediate term...those big-money bears (so few surely remain) are surely going to have to sit it out for a few days. Only a lower low of 1390/85 would indicate 'something' might be changing.

Posted by Trading Sunset at 19:01:00
Email ThisBlogThis!Share to TwitterShare to FacebookShare to Pinterest

We are putting in a higher high, now the issue will be, do we put in a higher low? The 60min cycle is clearly overbought again, so we are due to level out around current levels, and 'should' pullback at least a little later today/early Wednesday.

As noted earlier, currently, ALL the bigger cycles are now bullish across virtually all indexes (only the transports is a little weak still). Arguably, 'new bears' should wait until a break at least below the 1390/95 level. 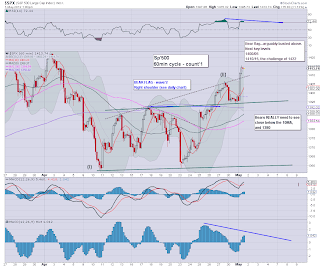 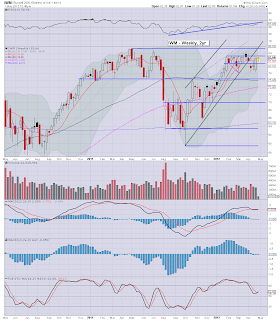 Its important to note that not all the indexes are breaking key levels (yet) today.. IWM (representing the Rus'2000 small cap index) remains stuck at the level that has held it back for three months! If the IWM can't break back over 83.00 this week, that would be one renewed hope for the bears.


Lets end with a quick look at the Euro... 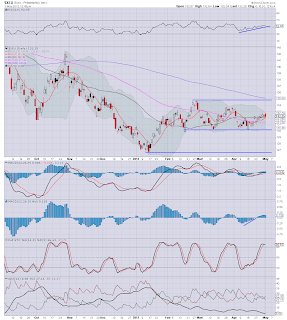 *I'll cover this in a little more depth after the close

For now though, from a MACD cycle perspective, we are just starting to rollover. The big level is indeed 1.30..a break under that opens up 1.25/24 within 2-3 weeks. Its just something to keep an eye on.

--
Stocks to check out today... GNK, SHLD, and BKS (which did fail to hold $20!)
--
yours
feasting on biscuits with Tea....whilst watching 'The Time Machine' ;)
Posted by Trading Sunset at 18:02:00
Email ThisBlogThis!Share to TwitterShare to FacebookShare to Pinterest

12pm update - no buyers...its all about the stops

Lousy volume again today. There are no buyers in this market today - although arguably, that's been the case for a large extent for some years. Today has been almost entirely about yet another set of bear short-stops being taken out. With sp' spiking quickly beyond 1405, there is virtually no one left on the short side. The only bears left are those with a stop equivalent to the sp'1422 high and those permabears who will hold short until the end of the time (or until a margin call, whichever comes first). 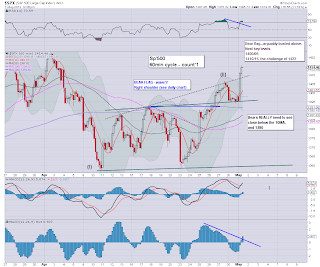 A clear break above all the bearish levels. The next primary target is obviously a test of 1422. 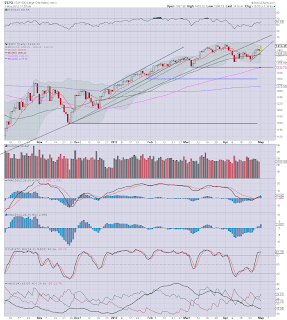 I suppose a few bears could argue we are back testing the broken October channel/trend line, but that's a pretty big stretch. Regardless, any 'serious money' bears would have already got kicked last week or today around 1400/05. There is nothing bearish here. 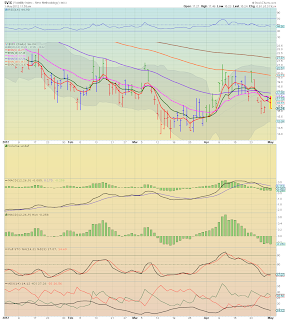 Its possible we put in a higher lower, but the trend is without question still weak. Yesterdays minor 5% up move..now entirely negated.

The daily, weekly, monthly cycles..are now ALL currently bullish.
Posted by Trading Sunset at 17:03:00
Email ThisBlogThis!Share to TwitterShare to FacebookShare to Pinterest

11am update - bears all kicked...again

With the ISM data coming in 'better than expected', the market quickly swung from dow -35 to +70 in a matter of minutes. Clearly, the 'serious money' bears with stops at sp'1400/05 will have all got stopped out. It would be a brave bear to hold short right now, whilst the weekly and monthly cycles show ZERO indications of a bearish down move. A rough start to the month for those resiliently holding short. 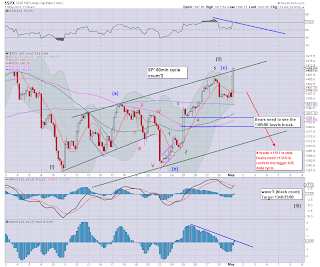 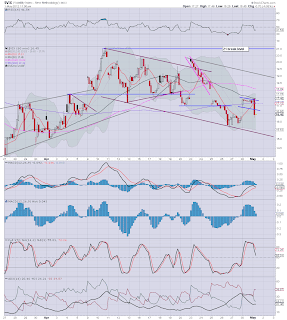 A severe fail for the VIX, the bull flag has been completely broken below, and next level is around 15.50/00 - that is certainly within range within the next few hours.


A quick look at the Dow, which is breaking out..to the upside. 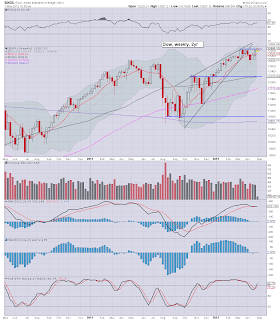 Its important to recognise the Dow'30 has indeed broken above what was resistance for 2 months. The next level is around 13500, roughly another 1.5% up.

Posted by Trading Sunset at 16:02:00
Email ThisBlogThis!Share to TwitterShare to FacebookShare to Pinterest

10am update - market snapping up

A relatively quiet open..as expected. The 15min cycle is maxed..so we do have the opportunity to go lower for the next 2-3 hours. The 60min cycle certainly still pretty low, so it won't be easy for the market to sell off all the way into the close. 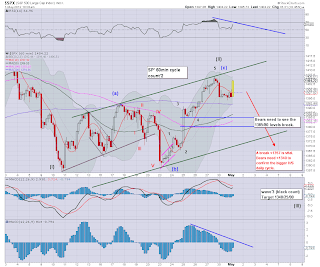 A break over 1406 would start kicking out those bears again.

I would really like to see a close under 1385 today -its a soft resistance level, although that is probably way out of range today, much more easily attainable tomorrow, later in the week.

As ever...more throughout the day.
Posted by Trading Sunset at 15:04:00
Email ThisBlogThis!Share to TwitterShare to FacebookShare to Pinterest

Good morning. Futures are suggesting market will open up around 0.25%. In the scheme of things, that's arguably noise. What will matter - just like yesterday, we have econ-data at 10am. Look for ISM manufacturing number to come in weak (market is looking for 53.0, vs previous 53.4). If ISM does disappoint, then bears have a chance for sp'1380s at some point today. Although 1380 still won't even begin to confirm a new down trend. We need a break of 1340 to confirm the bigger picture. 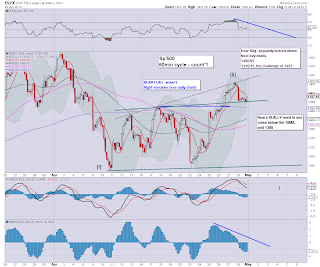 From a cycle perspective we are due to go up for at least a few hours, so sp'1400 would indeed be a very likely pre-10am level to re-test.

So long as we don't hit 1406, bears shouldn't be getting kicked out of their current short-positions.

Good wishes for Tuesday trading.....and welcome to May !
Posted by Trading Sunset at 13:18:00
Email ThisBlogThis!Share to TwitterShare to FacebookShare to Pinterest

April comes to a close, where now? 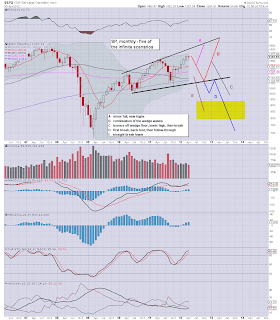 *there is of course one main scenario not on this chart, and that is where the rally merely continues upward from the current level, without even a 'moderate' retracement to around 1300/1270.
--
'If' we can break the recent low of 1357, then I'll hold to my original best guess of Scenario B.

Anyway, with April ending, I just thought this is one way to end the month..and start another.

We saw a moderately lower close on Monday for the main indexes. We have a busy week ahead, there is key econ-data every day. Tuesday will see ISM manufacturing data (10am), will that disappoint as did the Chicago PMI today? 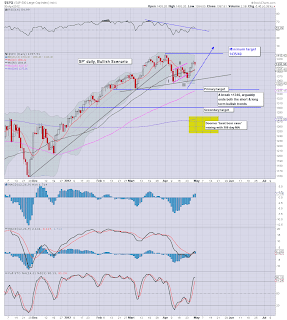 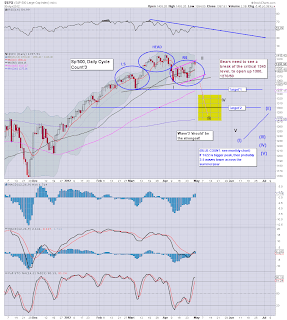 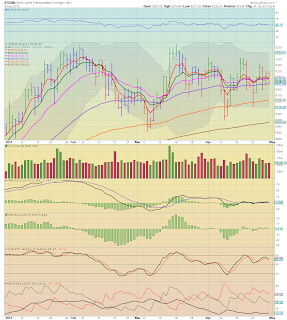 The bulls are still in control of course. From a daily cycle perspective, the 10MA of 1386 will act as the first line of support tomorrow. We saw a bullish cross today, with the 10MA crossing back over the 50 day.

The bears are still desperately hoping this is one giant H/S formation, with the (pink) bear flag as the RS. Only a break under the recent low of sp'1357 will give a preliminary confirmation. Arguably, the bears need a break of 1340 and then1300 to confirm the bigger bearish theory.

Finally, all but one of the 'rainbow' charts remain bullish. However - and most interesting of all, the Transports put in a sell signal today (at least via the Elder Impulse chart-style). Keep in mind the weekly and monthly cycle for the transports, the direction in which the 'tranny' goes..will most likely be the one in which the main market eventually follows.