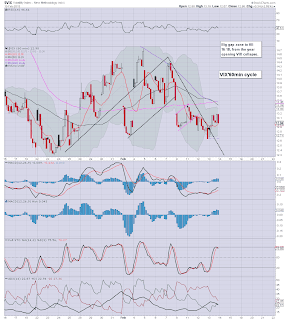 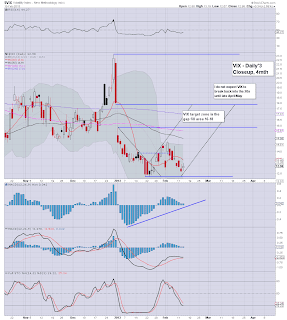 Hourly cycle remains an utter mess. The narrow trading range is really making it near impossible to discern any real trends.
--

Daily cycle is offering a possible turn, with a wide bodied doji candle.

First target is a break of the recent high, into the 15s.

The sp'daily chart should offer some guidance, in discerning the next exit point for current VIX longs. Rising support is now around 1475.
-

Every one of the main indexes broke new post 2009 highs today. Despite the slightly weak intra-day action, the primary trend is still strongly higher, with no real sign that a retracement will occur any time soon. With a giant POMO tomorrow, it'd be surprising if we don't break into the sp'1530s. 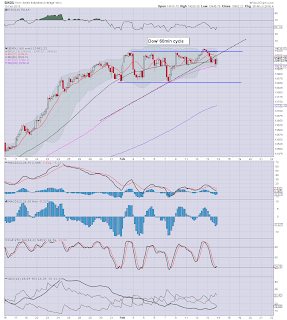 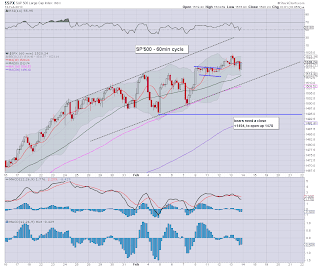 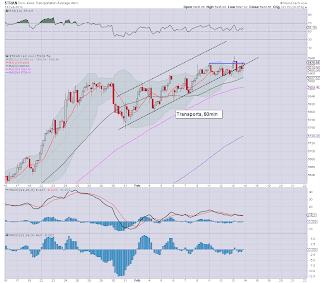 With the big POMO tomorrow, it will be interesting to see if we can see a sharp ramp..into the mid 1530s.

After all, why not? Everything is 'fixed' right?
--

the usual bits and pieces across the evening.
Posted by Trading Sunset at 20:43:00
Email ThisBlogThis!Share to TwitterShare to FacebookShare to Pinterest

A little wave of weakness, and we're back near the lows of the day, although the nasdaq is still green. VIX is kinda interesting, a close >13.50 would offer the bears some small hope of a further challenge to break into the 15s in the near term. 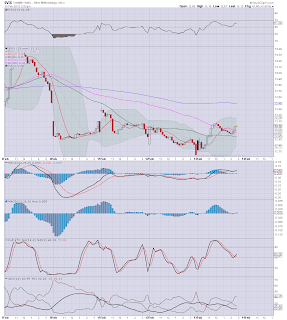 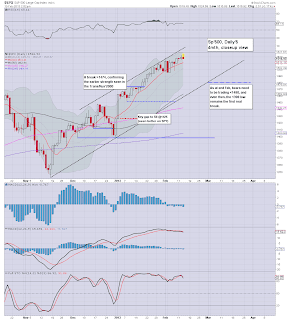 *metals still weak, not that I'm meddling in that. Its a very marginal situation. There is a much larger threat of multi-month upside (along with WTIC Oil) in the weeks..and months ahead.

Its that time of day again. The hourly index cycles are very possibly floored, and we could easily climb into the close. VIX is still 2-3% higher, but we're seen time and time again.it weakens into the close. Incredible underlying index strength...its just always there. 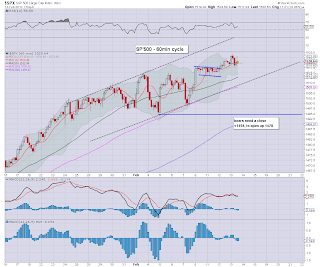 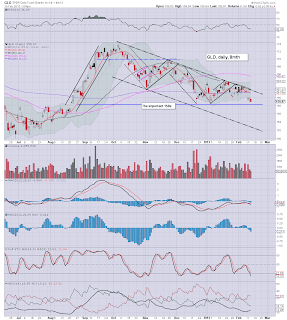 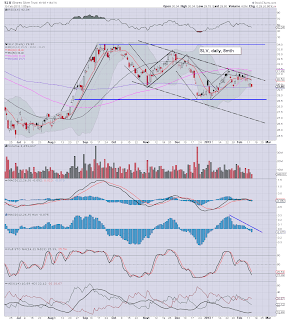 So..lets see if the bots can melt the indexes back to new highs by the close.
--

For me, metals remain the interesting aspect. Gold is especially weak right now. Significant downside viable. For the moment, I'm not chasing it lower.

Posted by Trading Sunset at 18:57:00
Email ThisBlogThis!Share to TwitterShare to FacebookShare to Pinterest

A slight bit of weakness..but then...bears have been teased like this for weeks. A minor wave lower...and then an afternoon recovery rally? Regardless of the near term 'noise', those broader trends look set for much higher levels into the summer. 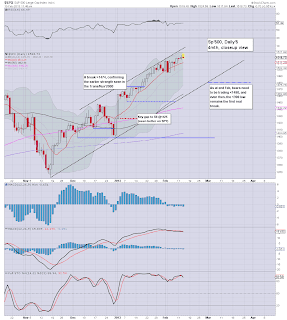 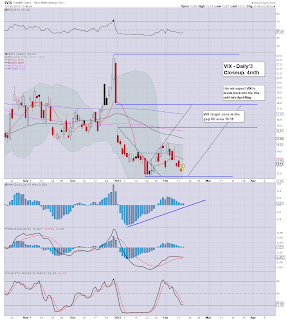 VIX is the interesting one right now. A break into the 15s, would open up the 16-18 gap zone again...which would become prime 'dip buying' zone for those who want to get onboard the equity long train.

-
Metals are weak. Its a tricky level, and I'm going to sit it out. Safer trade is long, but not at this level. 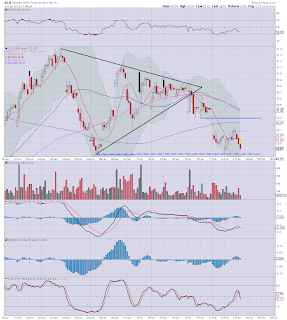 SLV could easily fall into the low 28s...which would make for a very nice entry.


back at 2pm
Posted by Trading Sunset at 16:51:00
Email ThisBlogThis!Share to TwitterShare to FacebookShare to Pinterest

10am update - another day of melt

Mr Market opens higher, and we already have new post 2009 highs for the Dow and SP. This market remains a slow motion freight train. The fuel is primarily POMO, and the driver is...none other than the Ben Bernanke. Passengers? Oh yeah, I guess that would be the algo-bots. 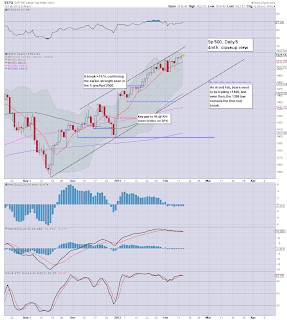 Yet another day of low volume melt. No reason to expect anything different than yesterday..or the many days before that.

Keep in mind that tomorrow is a huge POMO day, and it will be fascinating to see if we break significantly higher into the 1530/40s.
--

*metals are a little weak.

I'm still kinda considering a re-short on SLV after my exit yesterday, but the opening action is kinda dull. SLV could easily melt higher - along with the main market, across the day. 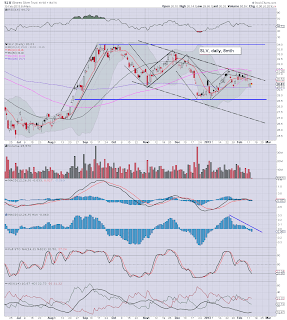 What is clear, the only 'safe long' in metals, is after a few daily closes above the declining resistance.
--
Posted by Trading Sunset at 14:49:00
Email ThisBlogThis!Share to TwitterShare to FacebookShare to Pinterest

The retracement that never comes

Since the giant two day hyper-ramp (Dec 31/Jan 2), just six weeks ago, the market has remained in classic algo-bot melt mode. This is indeed not the first time we've seen this sort of action, and it has to be considered..could this continue until year end? 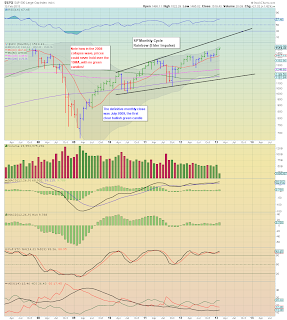 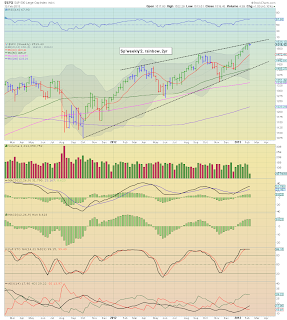 So..another higher high for both the Dow and the SP'500 today. Yes, the Transports and the R2K are looking a little tired, but still, the broad trend remains UP.

Even if there is a key cyclical peak sometime soon, its going to take some weeks, if not 2-3 months before we have any clarity.

Those hopes of a retracement...remain as distant as they were at the close of Jan'2nd.

The Feds POMO program has only been going since the start of the year, so I have to say, I find it really bizarre to see people already talking about QE3 ending. The fed could end it anytime they want of course, but still, I'd have to believe they'll let it run for 6-9 months at least, if not just keeping it permanent.

This Thursday is a major POMO of 5-6bn, so it will be interesting to see if the market can ramp a little harder, perhaps into the 1540s by the Friday close - which is option expiration. The sp'1530/40s would certainly help to wipe out just about EVERY single one of the Feb' equity put options.
--

As for Wednesday, there really isn't too much to look for. Downside to sp'1510 is viable, but a break under that looks too difficult. There is open air...to the 1540s -  as offered on the monthly charts.

For the remaining bears out there - and there can't be too many, these remain....'difficult' times. Sincerely...good wishes to those..holding on out there.

The main indexes closed somewhat mixed, although the sp'500 and Dow both made new post-2009 highs. The broad trend remains strongly upward, there is simply no sign of the current trend ending. Even hopes of a minor 2-4% retracement remain just that...hopes. 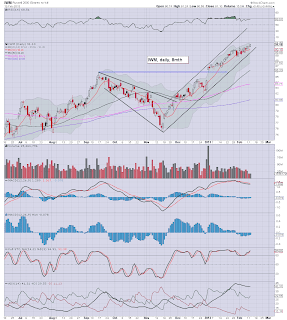 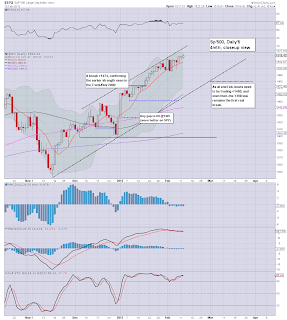 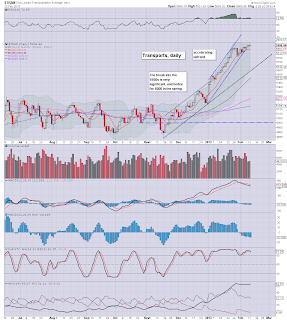 So..another day..much like the previous few weeks. They all kinda blend into one, don't they?
---

The underlying MACD (blue bar histogram) cycle now looks floored, and is even starting to tick back higher on the daily charts. It will be a few days before we go positive cycle again.

Lets be clear, there is NO reason why we won't just melt higher for another few weeks...and beyond.

How is that impossible, when the Fed is throwing 45bn of POMO $ at the primary dealers each month? At least 'some' of that money is not going to just sit on a hard drive, its going to find its way into an equity account..and it will bid up this market!

As a year end target..it has to be considered.