It was another bullish week for US equity indexes, with net weekly gains ranging from 3.2% (Transports), 1.6% (Nasdaq comp'), 0.8% (sp'500) to 0.1% (Dow). Near term outlook still threatens a minor retrace of around 1.5-2.0%, but broadly, the US market is super strong, which remains especially impressive considering the USD. 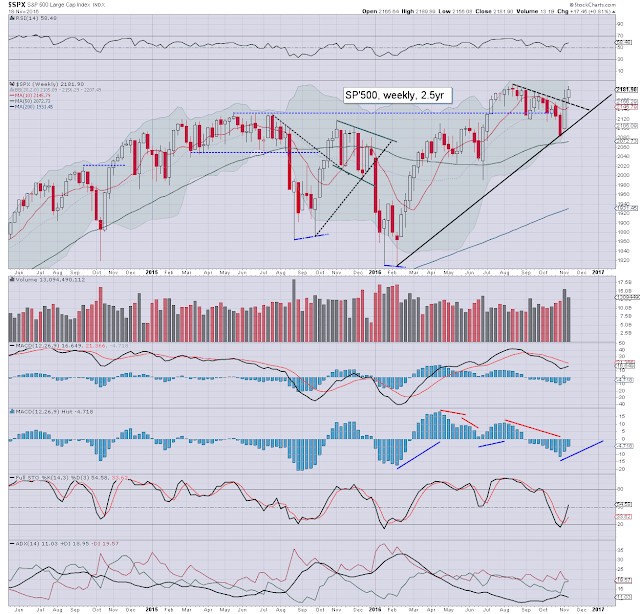 Equity bears can't be remotely confident unless price action is back under the Oct' low of 2083.
-- 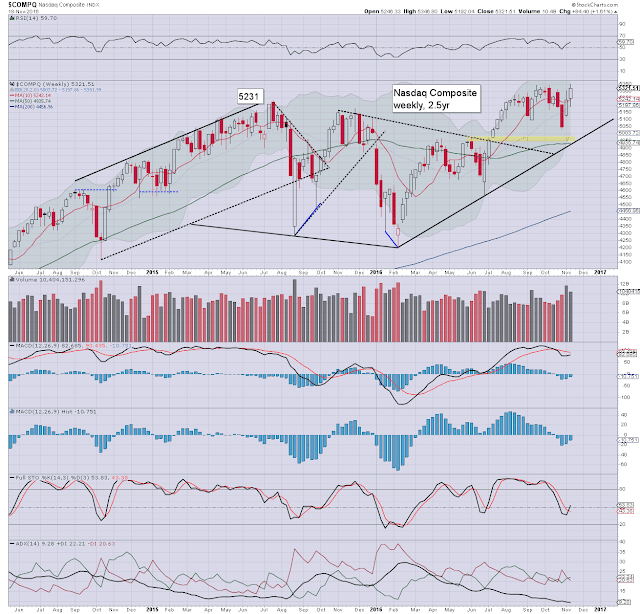 The tech managed a new historic high of 5346, settling +1.6% @ 5321. Upper weekly bollinger will be offering the 5400s in the near term, with a MACD bullish cross due. The 5K threshold remains core support, and doesn't look likely to be tested for some months. 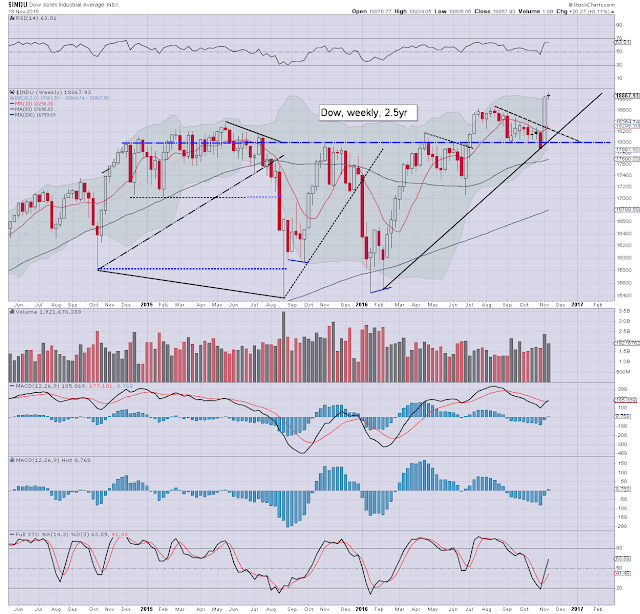 It was a relatively subdued week for the mighty Dow, but it still broke a new historic high of 18934, settling net higher by just 0.1% @ 18867. Price momentum has turned positive for the first time since early September. The 19000s look probable before the fed raise rates in mid Dec'. Things only turn bearish if the Dow is back under the 18k threshold. 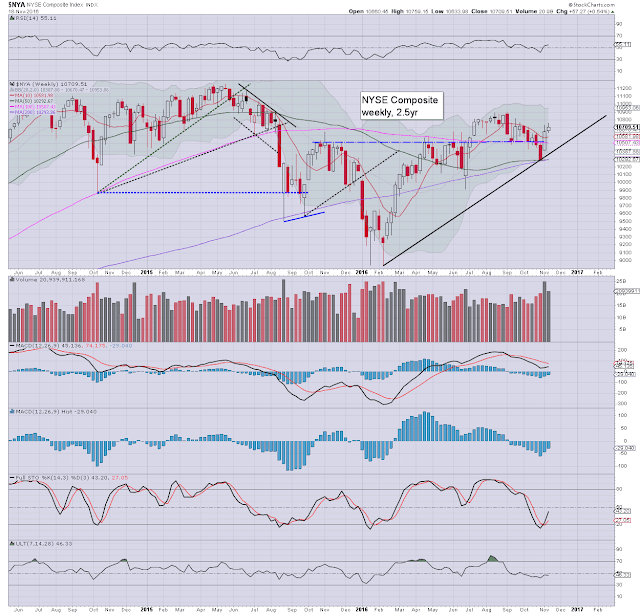 The master index saw a moderate weekly gain of 0.5% @ 10709, the best close since late Sept'. Next upside target remains the 11k threshold, where the upper weekly bollinger is lurking. The May 2015 historic high of 11254 looks out of range until early 2017. 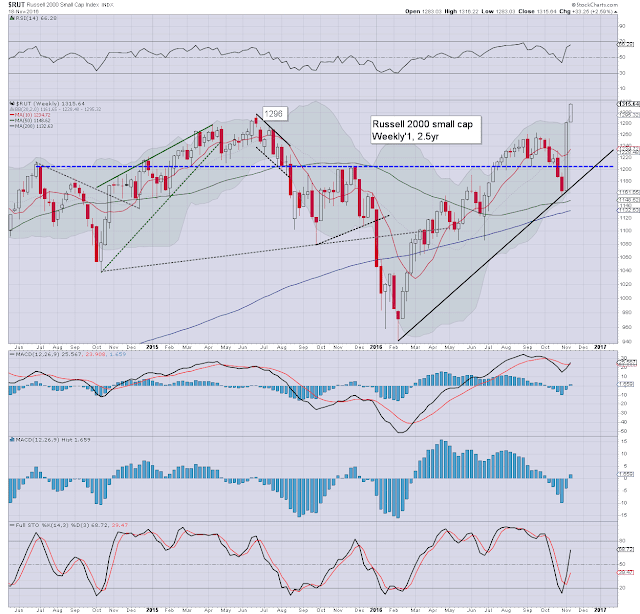 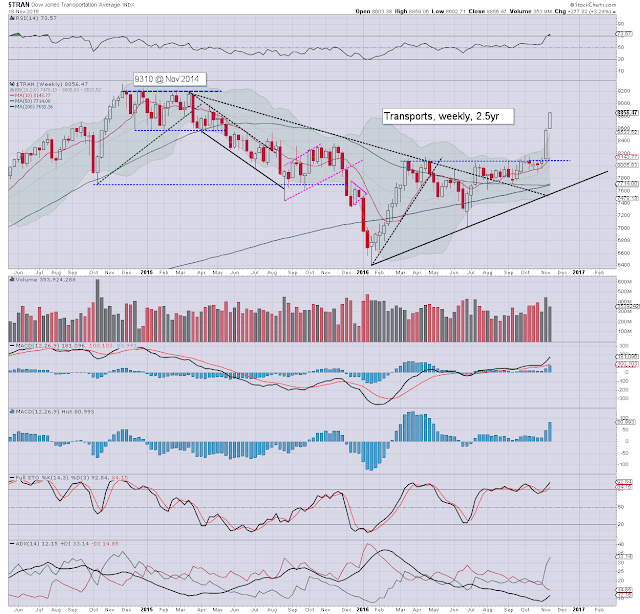 All the main US equity indexes continued to build upon their hyper-rebound election gains.

There have been new historic highs in the Dow, Nasdaq comp', and the R2K. The sp'500 is next to follow.

It will be a short 3.5 day trading week, as the market is closed on Thursday for Thanksgiving, and Friday is a half day. Some traders will understandably take the entire week off, if only to do some shopping, and enjoy a pre-Christmas feast.

*the only fed official scheduled is Fischer, due next Monday morning at the CFR in NYC.
--


If you value these continued postings, you can support me via a monthly subscription, which will also give you access to my relentless intraday coverage @ permabeardoomster.com

Have a good weekend
--
* the next post on this page will appear Mon' @ 7pm EST
Posted by Trading Sunset at 17:00:00
Email ThisBlogThis!Share to TwitterShare to FacebookShare to Pinterest

A second week for the bulls 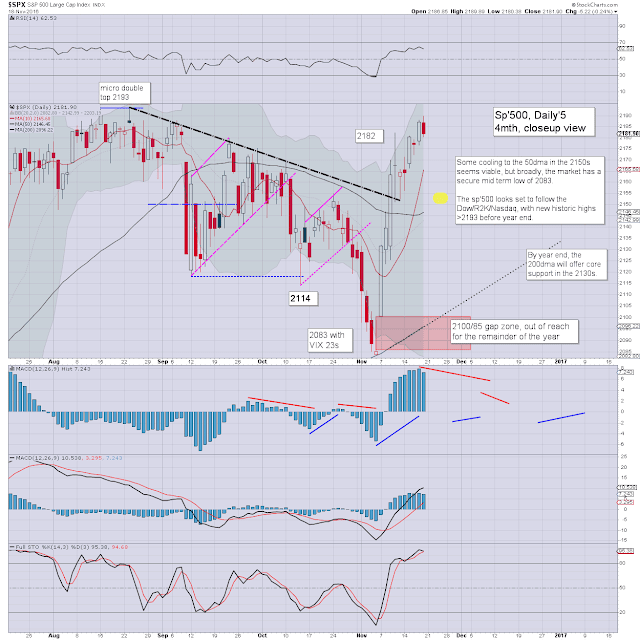 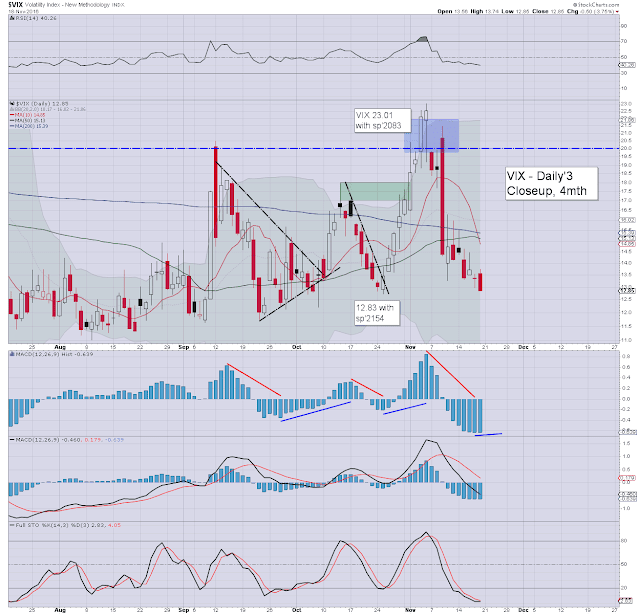 It was a naturally choppy opex-end to the week. Cyclically, we're seeing price momentum start to tick lower, although a bearish MACD cross seems unlikely for at least clear two weeks.

VIX remained subdued, and there were the usual 'games' as it was knocked an extra bit lower into the close and in the brief 15mins of AH trade.

It was unquestionably another week for the equity bulls, with new historic highs in the Dow, Nasdaq comp', and the R2K. The sp', NYSE comp', and even the Transports can be expected to follow in the days, and weeks ahead.

*the weekend post will fully detail the US weekly indexes, and will appear Sat' @ 12pm EST.
Posted by Trading Sunset at 00:00:00
Email ThisBlogThis!Share to TwitterShare to FacebookShare to Pinterest
Newer Posts Older Posts Home
Subscribe to: Posts (Atom)