With equities still rallying, volatility is still declining. The VIX closed -1.2% @ 13.84. Across the week, the VIX declined by 7%, the lowest close in seven weeks. The big VIX 20 threshold now looks a very long way up. 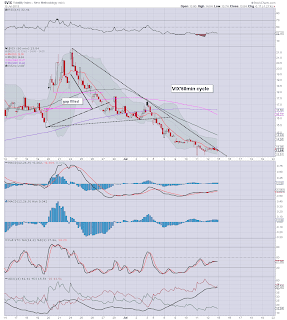 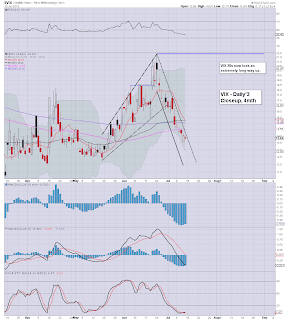 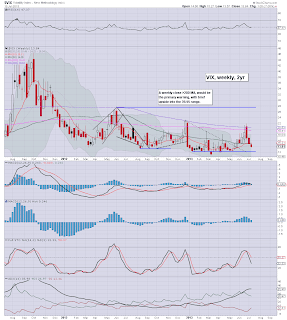 The market is starting to settle into a phase of almost complete 'fearlessness'. If the sp'1700s are hit early next week, then VIX 12s look viable, although it won't take much to spike the VIX back into the 14/15s.

As ever, when the VIX is at such low levels, almost all daily moves are little more than static/noise. Bears will need to keep in mind that any VIX jump of 10..even 20% doesn't count for much, when you start with an extremely low VIX.


Low volatility for some weeks to come

It would appear the VIX will generally stay low into August. The big question is whether VIX 20s will be hit in the next multi-week down cycle - prime time for that looks to be late August/early September.

All things considered, VIX 30/40s look essentially impossible this year...just as they were in 2012.

The bulls are in absolute control of the market, with the sp' closing +5pts @ 1680. There is simply no action on the sell side, moderate buying, and with 'sleepy summer trading', these are prime conditions for relentless algo-bot melt...all the way into early August. 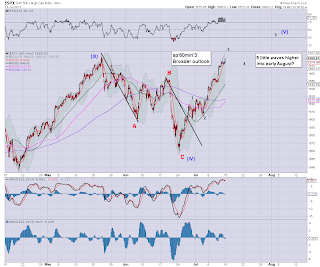 ..and another week comes to a close. For those still short, and 'hanging in there'..a lousy way to end the week.

As I feared, bears are utterly powerless, and the default trend remains to the upside.  There is no reason why we won't see Mon/Tuesday higher...before perhaps a few days of chop via opex/Bernanke speaking to the House/Senate.

*I am entirely on the sidelines, having exited a small Oil-long trade earlier today.
--

--
*next main post, late Saturday, on the US weekly index charts
Posted by Permabear Doomster at 21:01:00
Email ThisBlogThis!Share to TwitterShare to FacebookShare to Pinterest

3pm update - another week for the bulls

The market is seeing continued micro-chop, with the sp' comfortably holding the 1670s. The small 5/15min cycles are primed for upside into the close. Precious metals remain weak, but Oil is building upon gains, now +1.4%. 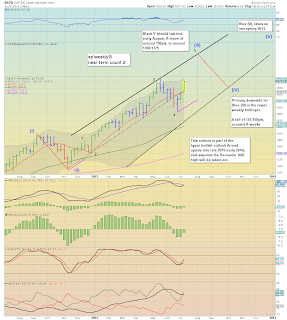 Unquestionably, another week where the bulls ruled.

Next week is opex, with the Bernanke speaking Wed/Thursday to the house/senate, so..there IS the chance of small pull back, but even the 1650s look 'difficult'.


Boeing remains a bit of a mess 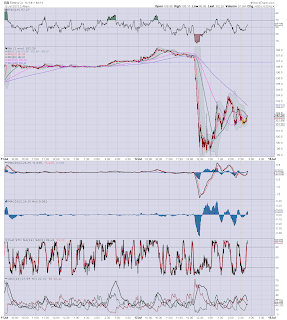 *I am content to be on the sidelines, and will merely seeking to go long the indexes/Oil next week.

Can the bulls manage 1680s..to really annoy the bears?
Posted by Permabear Doomster at 19:51:00
Email ThisBlogThis!Share to TwitterShare to FacebookShare to Pinterest

The market is still relatively quiet, with the only real action still in Boeing, trying to hold above the $100 psy level. Precious metals are weak, Oil is holding gains of around 1%, and the USD is +0.25%, which is weak, considering France was downgraded by Fitch. 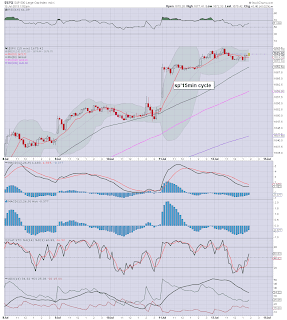 Relatively quiet....15min cycle is offering upside into the close.

If the bulls really want to annoy the bears, a weekly close in the 1680s.
-

I'm seeing a surprisingly large amount of bearish chatter out there, you'd think after a 115pt ramp from the 1560 low, most bears would be on 'radio silence' mode.

I still have to believe we'll broadly battle higher into early August.
Posted by Permabear Doomster at 18:54:00
Email ThisBlogThis!Share to TwitterShare to FacebookShare to Pinterest

A hot summers day in London city...even the planes are catching fire, Boeing shares collapse 7% in mere minutes..which has knocked around 50pts off the Dow. Other indexes holding pretty steady though, and the 'melt into the close' remains very likely. 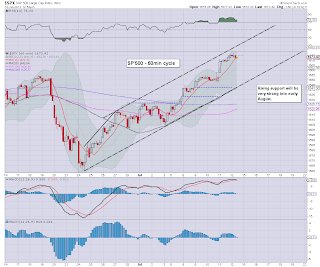 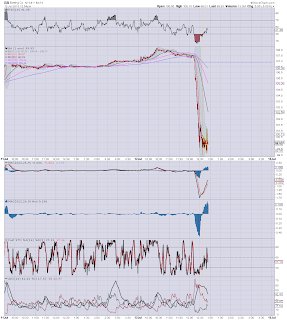 A little drama in the capital with the main airport closed due to one of those 'dream liners' getting a little hot whilst parked.

Price action/trading volume pretty exciting for Boeing, will be interesting to see if they can manage to get a close at least >$100.

If it does turn out to be those batteries..Boeing has a real problem!

Is is surely a contraction obligation of them to say it..at least once each..per hour.

Meanwhile...London skies are emptying...as LHR is back up
Posted by Permabear Doomster at 17:56:00
Email ThisBlogThis!Share to TwitterShare to FacebookShare to Pinterest

The market is ending the week on a very quiet note, and that will merely allow for the usual algo-bot melt upward. A close in the 1680s won't be easy, but the 'melt' is the default trend. Bull should be satisfied with any close in the 1670s...with a VIX that can't even hold the 14s. 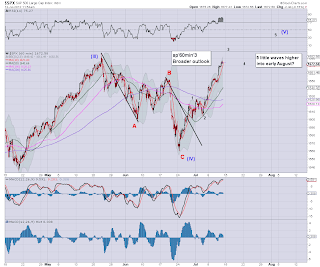 Sp'500 has strong support at the rising hourly 10MA.currently 1671. Upper bollinger is offering the mid 1680s..as early as late today/Monday.

Ditching the CEO is a waste of time, if you still won't raise your book prices... 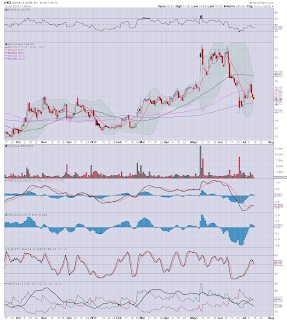 Headed for sub 10s, if they don't change the costs/prices...within the next quarter or two.

If you look closely..you can almost see the vultures starting to circle.

Will look for another Long oil/index trade next week 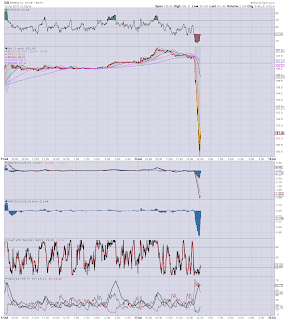 Battery issues? Or maybe..just the hot summers day in the city?
Posted by Permabear Doomster at 16:57:00
Email ThisBlogThis!Share to TwitterShare to FacebookShare to Pinterest

With consumer sentiment coming in at 83.9, the market is more than pleased to quietly melt higher. Sp'1680s look viable at least 'briefly' today, where ever we close today, really makes no difference. Bulls are in full control, and sp'1700s are a'coming. 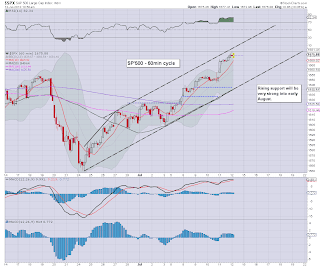 Its turning into a very quiet day..ahead of a sunny and warm weekend.

Absolutely no reason why anyone should be short into next week, with the weekly/monthly charts all cruising higher.

Sure, we are probably going to see a 'minor' pull back next week, but that might only be for a day or two, perhaps mere hours.

--
Posted by Permabear Doomster at 15:51:00
Email ThisBlogThis!Share to TwitterShare to FacebookShare to Pinterest

10am update - melting into the weekend

The US market is seeing micro-chop ahead of the weekend. Underlying pressure is still very much to the upside though, and there is no reason why we won't just slowly melt higher into the weekend. A close in the low sp'1680s will easily open up 1700 early next week. 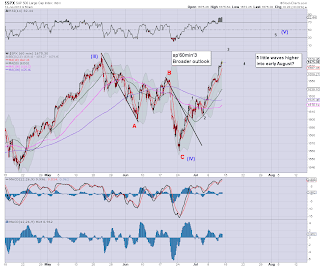 There is a total absence of 'bearishness' out there now.

I do see a fair few people touting a near term pull back, but I'm thinking that's probably not going to begin until next Wed/Thursday - when the Bernanke is speaking to the US House/Senate.

*I am still long Oil, and looking to exit ahead of the weekend, although I intend to stay broadly long Oil into early August. WTIC Oil looks set for 110/115.

What does make me wonder, with the monthly breakout on crude, what about the longer term outlook? $130s, 140s in 2014?
Posted by Permabear Doomster at 14:51:00
Email ThisBlogThis!Share to TwitterShare to FacebookShare to Pinterest 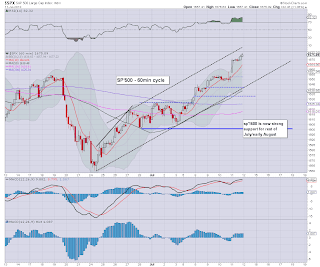 Well, its the end of another 'difficult week' for those in bear land.

With the R2K well into historic territory, there seems little reason why the sp' won't be trading in the 1700s within a few days.

Unquestionably, the Bernanke..and the Fed are playing this market..literally word by word. It is probably something to consider, in that this situation could continue for some years to come.
-

*I am long Oil, and will seek an exit ahead of the weekend.

Broadly speaking, I see general upside, at least into early August, and considering 'everything' out there, even a Sept/Oct pull back will arguably just lead to another ramp into year end/spring 2014.

How long until CNBC have a little box in the corner of their screen, counting down to sp'2000 ?
-

Posted by Permabear Doomster at 13:17:00
Email ThisBlogThis!Share to TwitterShare to FacebookShare to Pinterest

The market is now at day'13 of a rally that has seen the sp' ramp 115pts, from 1560 to 1675. With Bernanke assuring the market that QE is set to continue, the bulls are back in total control. It would appear the indexes will continue to push strongly higher into August. 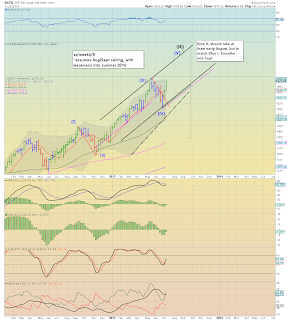 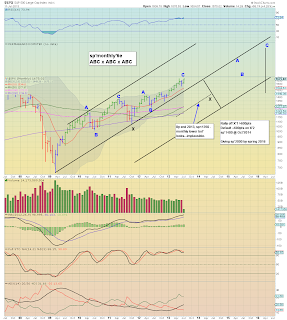 The past 13 days have been a real trial for the bears, not least including yours truly. I certainly expected a rally (I even went long at sp'1564), but I had been expecting a deeper low to follow..and it never came.

The sp'1687 high looks set to be broken either tomorrow or early next week, and the sp'1700s are a given, right? Is there anyone left that still thinks the sp'500 won't be trading in the 1700s this month..or next?


RE: the two charts

Weekly'9 -  assuming 1687 was a peak of sub'3...we just saw the 4 down..and now we're in the last wave higher..that will max out sometime in August..although I am trying to keep in mind that it might drag out into September.

The second chart - monthly'6e, is more of an academic interest that anything. Certainly, its no good for short term trading.

As regular readers will know, I have a major interest in the work of Martin Armstrong. If his ECM cycle is 'broadly' reflected in the US equity/commodity markets, with a high in late 2015/early 2016, then we will probably be looking at sp'2500..perhaps even 3000.


Issues still out there

I still think there are some 'serious issues' out there that the market is currently completely ignoring. Not least in Germany, where Merkel (I believe) will get the boot in September elections.

The problem remains for the bears, so long as QE continues, the underlying price pressure will remain to the upside...despite any periodic 'scares' - like Cyprus. Anyone still remember the Cyprus banking implosion?

There are two pieces of econ-data to be mindful of tomorrow...producer prices and consumer sentiment. I don't expect either to be 'bad' as such, so the market really shouldn't have any excuse to get even mildly upset ahead of the weekend.

*Having bailed on index-shorts early Thursday, I am now long Oil (via USO). For me, its been a difficult two weeks, but I will battle on..and I will win what is..the ultimate financial war. 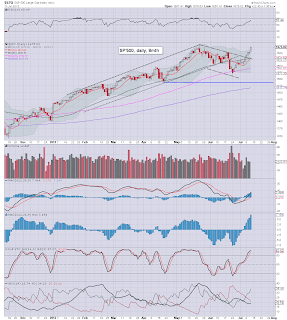 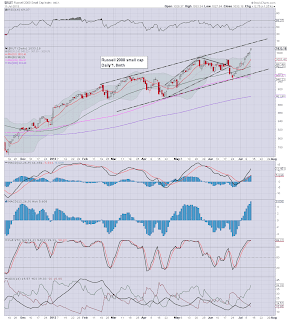 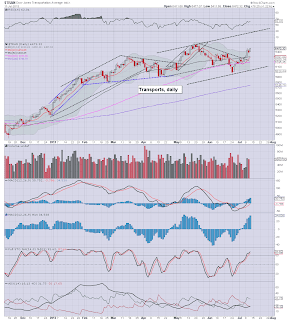 Another day the bears will want to forget. The brief 10pt drop from the Wednesday 'FOMC minutes' spike high of sp'1657 to 1647, now looks a long way down.

The sp' has managed a 115pt ramp across just 13 trading days, and that is pretty incredible on any basis.
--

Underlying MACD (blue bar histogram) cycle is still ticking higher on all indexes, and is in exceptionally strong-positive territory.  It is going to take some 'weeks' for this level of price momentum to be worked off.

Bulls..are absolutely in full control, with the sp'1700s looking viable as early as next week.