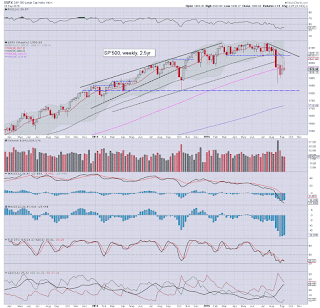 Like most other indexes, the sp' saw a notable higher high and higher low... which is clearly somewhat bullish. However, the swing from the FOMC spike high of 2020 to the Friday afternoon low of 1953 bodes badly for the market.

With the break of rising support - seen better on the daily/hourly cycles, the door is closing on any further price action in the sp'2000s. Indeed, its entirely possible Monday will see further strong downside... first target is the 1900 threshold, which would take out recent key lows of 1911 and 1903.

Underlying MACD (blue bar histogram) ticked higher for the second consecutive week, but remains deeply negative. Price momentum remains powerfully bearish, and a test of the 1867 double floor (Aug 24/25th) looks a given. Best downside case looks to be the 1750/25 zone.. viable by mid Oct'. New historic highs (>2134) look unlikely for the remainder of this year. 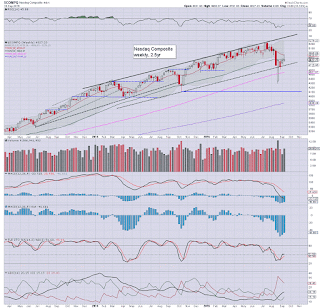 The tech' saw the second consecutive net weekly gain (if fractional) of 0.1% @ 4827. The weekly 10MA has provided clear resistance this week, and sustained action >5K now looks out of range for some considerable time.. perhaps even the rest of 2015. First downside target is the 4200/4000 zone. 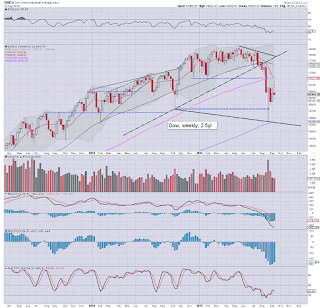 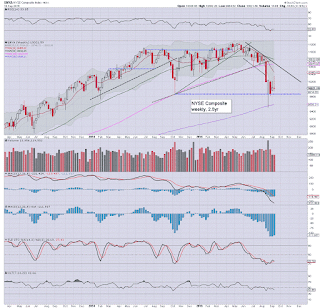 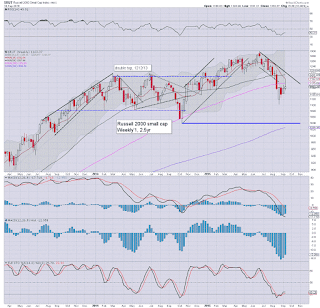 The second market leader - R2K, was the most resilient index this week, climbing 0.5%. However, the weekly 10MA was clear resistance, and the Friday close of 1163 bodes well for the equity bears into October. First target is the 1100 threshold.. and then the Oct'2014 low of 1040... the latter of which does seem probable by mid Oct'. 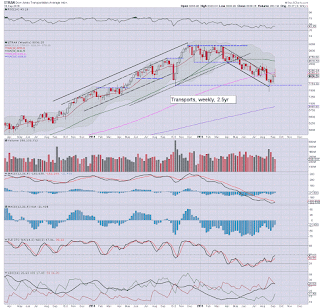 On first glance, the market held up okay this week, but the weekly candles do offer a clear spike-fail high from FOMC-Thursday.

Price structure on the weekly chart is a rather clear bear flag, and with initial breaks of rising support on Friday (esp' Trans), there is a high probability that the market maxed out on FOMC day.

Naturally, the big question is.. how far down can we go into October? 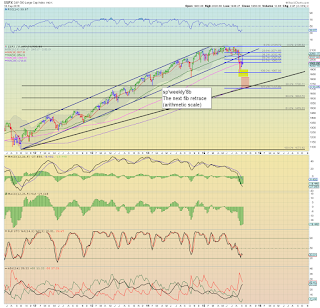 The above fib' chart offers a few hints as to why the 1750/25 zone is viable within the next 2-4 weeks. I suppose the next down wave could drag out into early November, but seasonally, the bears 'prime time' will have concluded by mid Oct'.

There is a Greek election this weekend, and the market might react to that early Monday.

*there are a few Fed officials due to speak next week, notably, Yellen, after the Thursday close.
--

Yours truly had another net positive week.. so I can't complain, despite missing out on the FOMC reversal. Its obviously very difficult to guess how Monday will open. I shall hope the market can rally across next Mon-Wed, it would make for a much better level to short from. Regardless, I will look to take short positions at some point next week.

The Fed have gifted the bears

US equities ended the week on a very negative note, and it has become clear to many that the US Federal Reserve have once again completely mis-judged the situation. With concerns over recent market weakness, the decision to not raise rates has meant the market remains in uncertainty mode... higher volatility is here to stay. 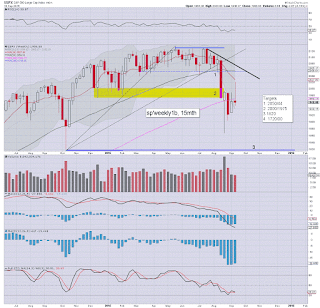 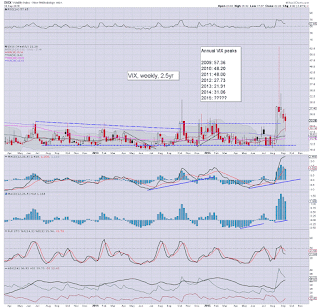 Suffice to add.. it is indeed utterly ironic that had the Fed raised rates, the market probably would have closed net higher today. Instead, we've seen a rather nasty reversal (3.3%) from 2020 to 1953... with VIX climbing from the 17s to the 23s.

In many ways, the decision of the FOMC has kept open the door to a rather huge October decline.. not just in the US equity market.. but across the world.

Goodnight from London
-
*the weekend update will be on the US weekly indexes
Posted by Trading Sunset at 04:00:00
Email ThisBlogThis!Share to TwitterShare to FacebookShare to Pinterest

US equities ended the week on a very negative note, sp -32pts @ 1958 (intra low 1953). The two leaders - Trans/R2K, settled lower by a significant -2.2% and -1.5% respectively. Near term outlook is increasingly bearish, as key rising support has been broken on a number of indexes. 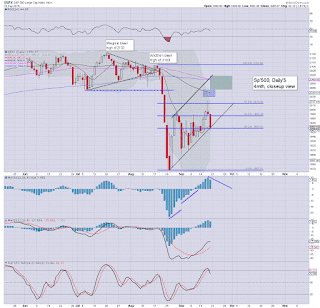 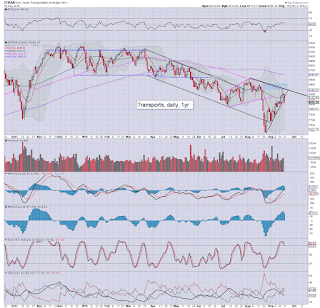 *I hold no positions across the weekend, but will look to build short positions on any intraday bounces.