Volatility down a bit more

With the main indexes rallying for a third straight day, the VIX was weak across the entire day, closing -2% @ 16.86. Near term trend still favours the equity bulls. Those on the short side should be seeking a weekly VIX close in the 20s, but that does seem very unlikely now. 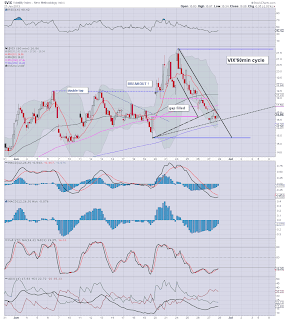 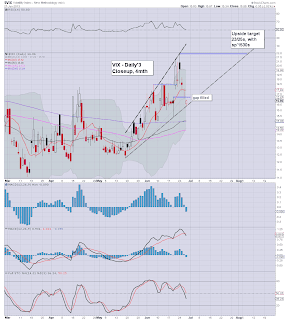 *perhaps most interestingly, we closed with a small reversal candle on the daily chart - right on the rising channel line, that goes all the way back to the mid May low.
--

VIX has already been effectively smashed down, and is now in 'trundle' mode. The only issue now is when will the next up cycle begin, and can it take out the recent high in the 22s?

Considering the power seen in the past 3 days, VIX 22 will be difficult to hit, and indeed, even if equities break a new low to the sp'1530s, the VIX could put in a divergent lower high.

Its certainly something to watch for next week.
--

The market climbed for the third consecutive day, with most indexes now 3-4% above the Monday low. Near trend remains bullish, hourly charts are warning of a possible rollover to end the week. VIX is failing to show any market concern, with a close in the upper 16s. 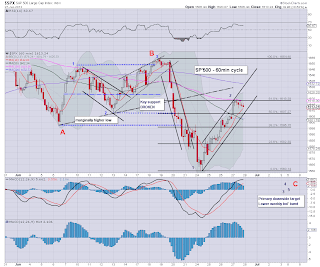 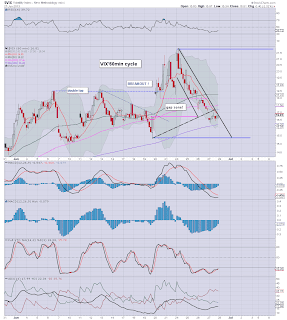 A very frustrating day for those on the short side.

The obvious question is how long will this latest nonsense continue? Certainly, end-month 'window dressing' might be another excuse for Mr Market to at least 'hold together' into the weekend.

(will the PMI number be a life-raft to the bears tomorrow morning?)
Posted by Trading Sunset at 21:01:00
Email ThisBlogThis!Share to TwitterShare to FacebookShare to Pinterest

The bulls have had a very strong 3 day climb of 60pts from the sp'1560 low. Hourly index charts are looking maxed out, and are offering initial signs of a rollover. Bears need a daily close <1610 for initial confirmation that this latest nonsense has concluded. 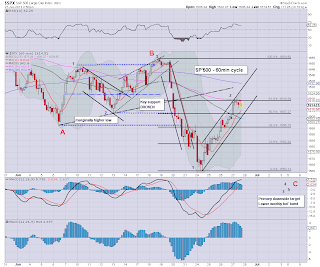 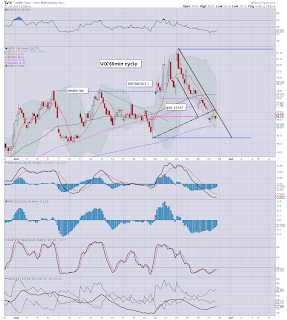 *VIX remains relatively stable, a daily close back in the 18s will open the door to the 20s again, but that seems very unlikely until next week.
--

So...the closing hour to what has been a pretty annoying day. For many out there, this was one day to forget.

*I will hold heavy short overnight..and most likely into next week.
--

re: next week. It has to be noted, its a 3.5 day week, with an early close on Wednesday (1pm), and Thursday closed. 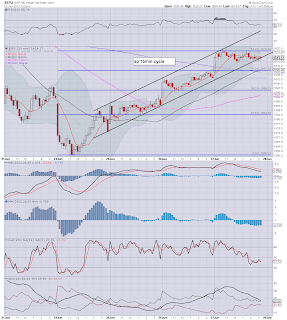 Bears need a close <1610 to make things a bit clearer

Bulls only have to break 1625 in the next push, and that would negate the weekly outlook.

Lousy end to a lousy day. Urghh
Posted by Trading Sunset at 19:51:00
Email ThisBlogThis!Share to TwitterShare to FacebookShare to Pinterest

For the bears, this wave higher from sp'1560 is getting truly tiresome. Certainly, 1620 is proving to be a significant level of resistance, but momentum is still on the bullish side, and bears look unable to close <1610. VIX remains weak, and the 20s now look out of range by the Friday close. 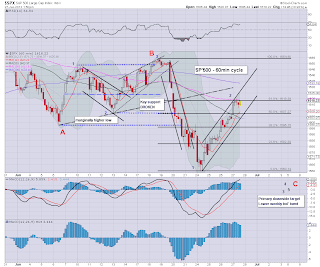 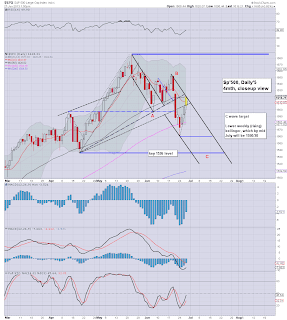 Hmm, what to say?

I knew the 1620s were a distinct threat when I went short yesterday morning, and this is perhaps the most annoying 1% index gain I've experienced in some months.
--

as noted earlier..at least there is no sig' QE tomorrow. 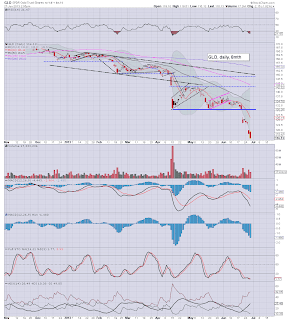 $900 Gold would appear likely 'eventually'.  as a multi-year low..before the next push.
--
Posted by Trading Sunset at 18:51:00
Email ThisBlogThis!Share to TwitterShare to FacebookShare to Pinterest

Market is holding just under the earlier sp'1620 high. Bears only need a daily close <1610 to break the up trend/channel. VIX looks floored in the mid 16s, although that looked the case yesterday..in the 17s. The R2K is particularly strong, +1.3% 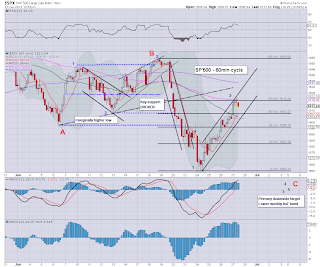 So, we're seeing distinct resistance at 1620, but considering its a major QE day, bears face problems into the close.

It does seem to be a day of technicals, and no doubt swayed to the upside by all those Benny bux sloshing around out there.

One upside for tomorrow, no QE, and if the PMI number comes in weak, it might be the excuse the market needs to begin another down wave.
--

stay tuned
Posted by Trading Sunset at 17:54:00
Email ThisBlogThis!Share to TwitterShare to FacebookShare to Pinterest

The market is facing strong resistance in the sp'1620s, and so far, the bounce continues. Bears merely need a daily close <1610, but that won't be easy. Today is seeing significant QE-pomo, and with little volume, the algo-bots will try to melt the indexes higher into the close 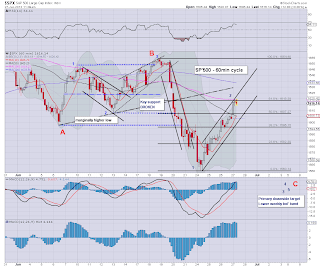 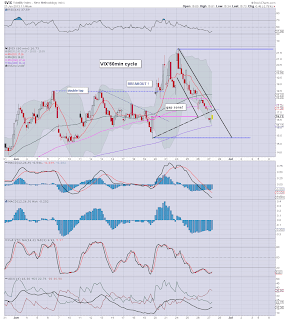 So.. another day higher, but at least we're seeing some signs that 1620s are indeed a key resistance level.

A difficult day for yours truly, but I'm only 15pts down, gods help those who have been on the short side since Monday morning. Urghh

I'm still guessing this nonsense WILL break to the downside, but it sure is testing my patience again.


12.03pm.. in 'theory' bears could turn the indexes fractionally red by 1.30pm, thats certainly the sort of 'best case' reversal I could envisage.

If bears are going to start kicking this market lower, now would be the time. 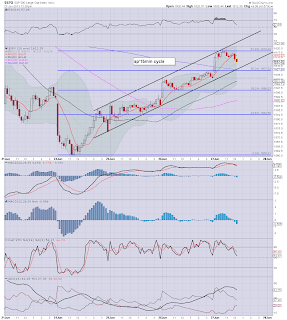 stay tuned
Posted by Trading Sunset at 16:52:00
Email ThisBlogThis!Share to TwitterShare to FacebookShare to Pinterest

Market has hit sp'1620, a 60pt rally in barely 3 trading days. With the VIX back in the 16s, the cheer leading maniacs on clown finance TV are once again 'happy with the Bernanke' and confident that the 'summer of recovery' (ver 5.0) is back on track. 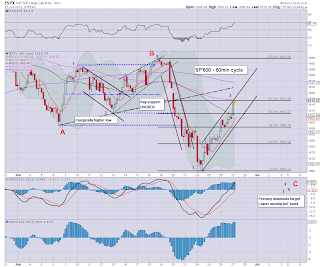 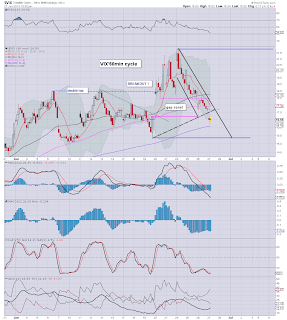 *VIX looks 'relatively' floored
--
We're at what is very strong resistance. There is of course the gap-zone, around sp'1625, and we could easily be there later today/early Friday.

It remains a problem how we close the week.

If we close anywhere >1605, that seriously wrecks the broader down cycle since May'22.

The rest of today..and tomorrow will be important.


*I remain heavy short..and now underwater. As noted, a weekly close >1620, and I'll have to seriously consider selling...regardless of price/loss.
-

UPDATE 11.16am, well, we're seeing some kind of reaction from the resistance zone. 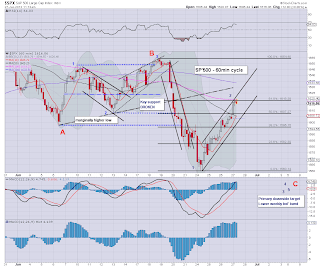 As noted..bears just need a daily close <1610, to break the channel
Posted by Trading Sunset at 15:53:00
Email ThisBlogThis!Share to TwitterShare to FacebookShare to Pinterest

The 'bounce' continues from the 1560 low, and we're now 55pts higher in just 3 trading days. Another classic reminder to the bears that this market has underlying power, fuelled by QE, melted higher by the algo-bots, and cheered on by a deluded mainstream media that believes everything is 'fine'. 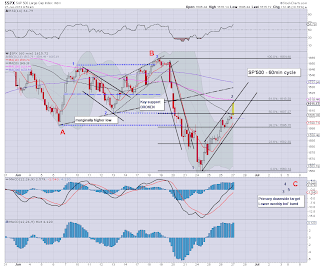 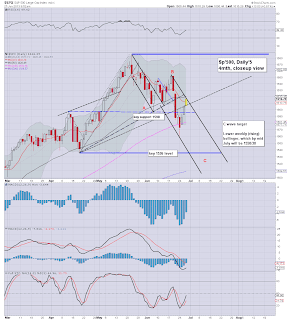 For the moment, 'normal service' has indeed resumed.

QE is fuelling this no doubt, and with low volume, the bots are able to easily melt this nonsense higher.
--

Worse case for the bears - assuming we rally into the Friday/end month close, sp'1540s.

The problem with that level is that it would utterly wreck the weekly charts current down cycle, and suggest that 1560 was a key low, and that we're now off to the 1700s.

On the flip side, there should 'in theory' be very strong resistance at 1620, with the 20, 50 day MAs, Fib' retace levels, and declining trend/channel. 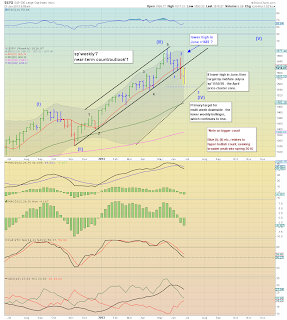 If we CLOSE this week >1603, the weekly candle will be blue, and ANY close >1620, and it argubly destroys any further downside potencial. 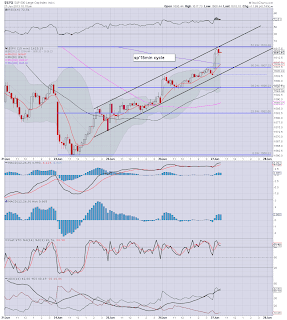 A daily close <1610 will BREAK the current bounce/trend.
Posted by Trading Sunset at 14:53:00
Email ThisBlogThis!Share to TwitterShare to FacebookShare to Pinterest

Good morning. Futures are moderately higher,  sp +7pts, we're set to open around 1610. This opening gap higher will open the door to the 1620s, which would seem the 'best the bulls can get' in this rather significant bounce. Precious metals and Oil are also a touch higher. 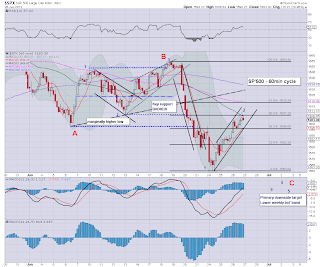 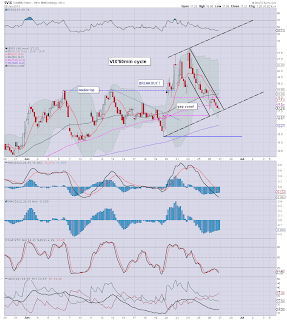 For those who are already short, this looks set to be something of an annoying open

The only issue is whether we'll see a sharp intra-day reversal from such levels, or if it takes a few days to level out, before a renewed wave lower towards the end of next week.
--

*there is a rather large QE today, and if volume is indeed low, it'll allow the algo-bots to melt this nonsense across the entire day. Same goes for tomorrow.
--

*I am heavy short of course, and looks like i'll be holding way into next week.
Posted by Trading Sunset at 13:25:00
Email ThisBlogThis!Share to TwitterShare to FacebookShare to Pinterest 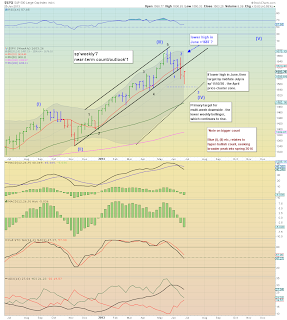 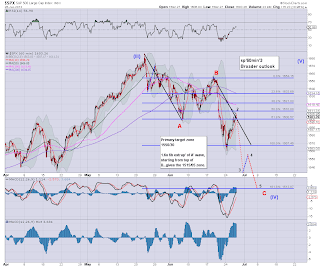 So, the bull maniacs managed to hit sp'1606. That's fine by me, in fact I was indeed hoping we'd open higher - since I was looking for a new short-entry.

I took an early morning entry @ sp'1601, it was pretty good to see the market almost immediately drop to 1595, but then it appeared that it was back to algo-bot melt mode, and we crawled back higher into the late afternoon.

All things considered, I am VERY content with my two rather huge bearish positions. I've shorted after a 40pt bounce, and that is surely 'reasonable' on any basis.

Thursday has 3 pieces of econ-data, the usual jobless claims, personal income/outlays, and also home sales (10am). Tomorrow does have significant QE, and so those on the short side need to be a little careful.

Even if we are -10/15pts by late morning, there will be very significant risk of a 7-10pt intra-day bounce.

**Friday should be the better day, with no sig' QE, and end-month/quarter issues. After all, who wants to hold long across the weekend?

The main indexes closed higher, with the sp +0.96% @ 1603. We're now a good 43pts above the Monday low, but this is probably a mere 'bounce'. Weekly charts still suggest further downside, and the primary target remains the lower weekly bollinger, currently @ 1497. 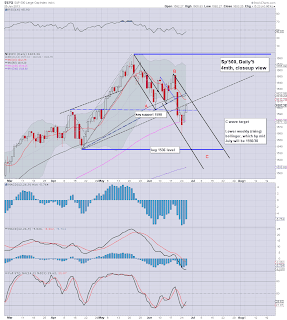 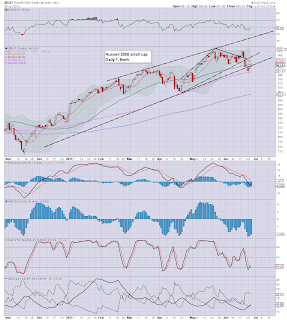 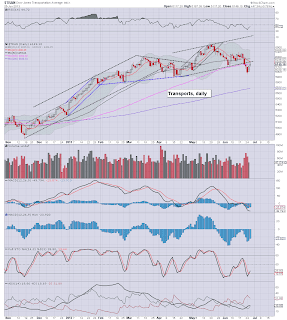 So, it was another day for the bulls, and the bounce is now almost 3 days in duration. That is pretty considerable, and almost matches the decline in terms of time.

Best guess remains, this is merely a bounce, and that further downside is due.

For Thursday, bears have some very clear break/snap levels.

VIX 18s, with sp'1595, although by the end of tomorrow, the bulls will need to have ramped the indexes to around 1610 - just to hold within the current up channel.
--

*I am heavy short, and effectively have an exit target of sp'1550 (minimum), but possibly 1530s within the next 2-3 trading days. I'm trying to be patient with this very large short-side trade.

As at next week, the weekly target will be around 1510. It won't be easy to hit, but it'd make for a very nice 'go heavy long' level.