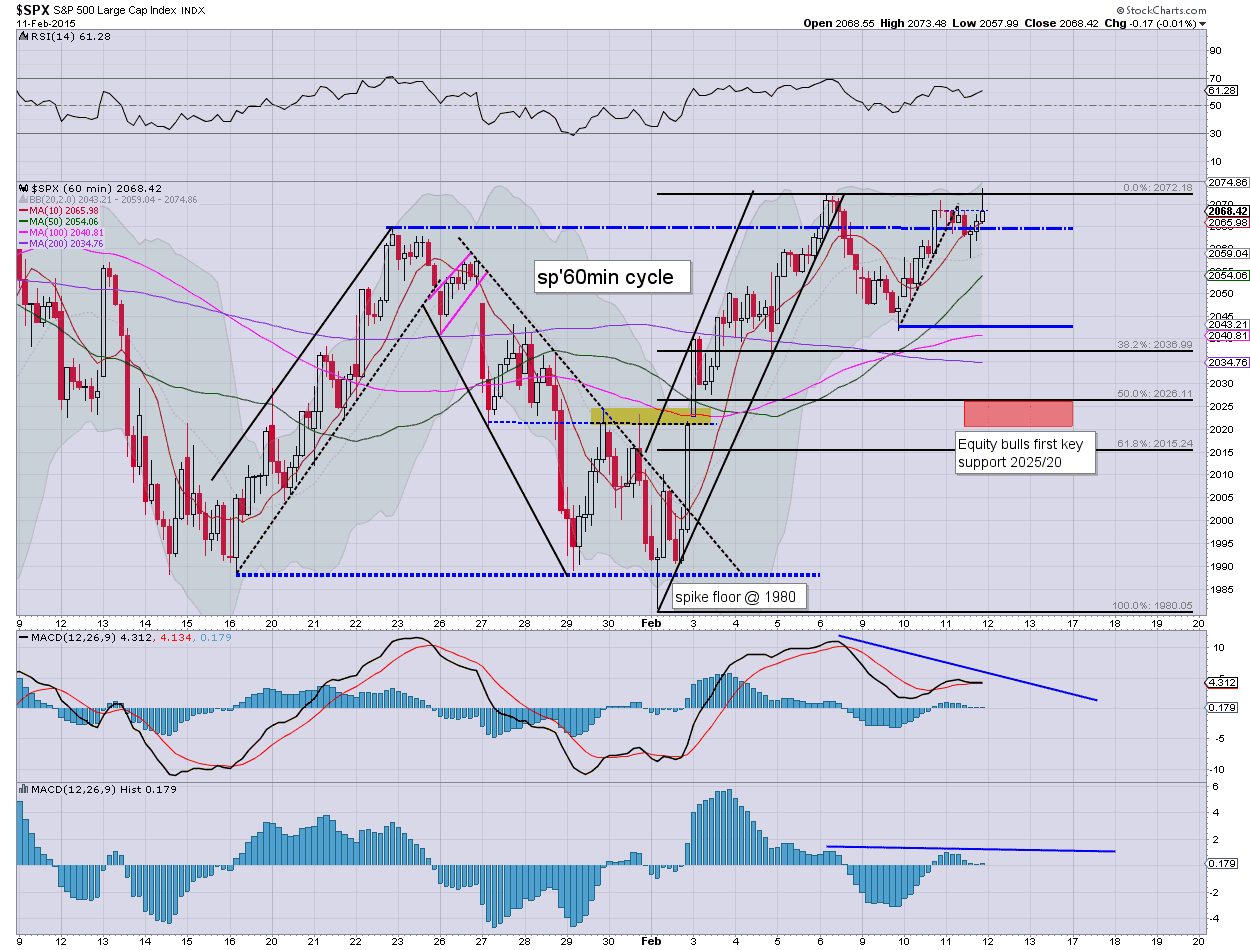 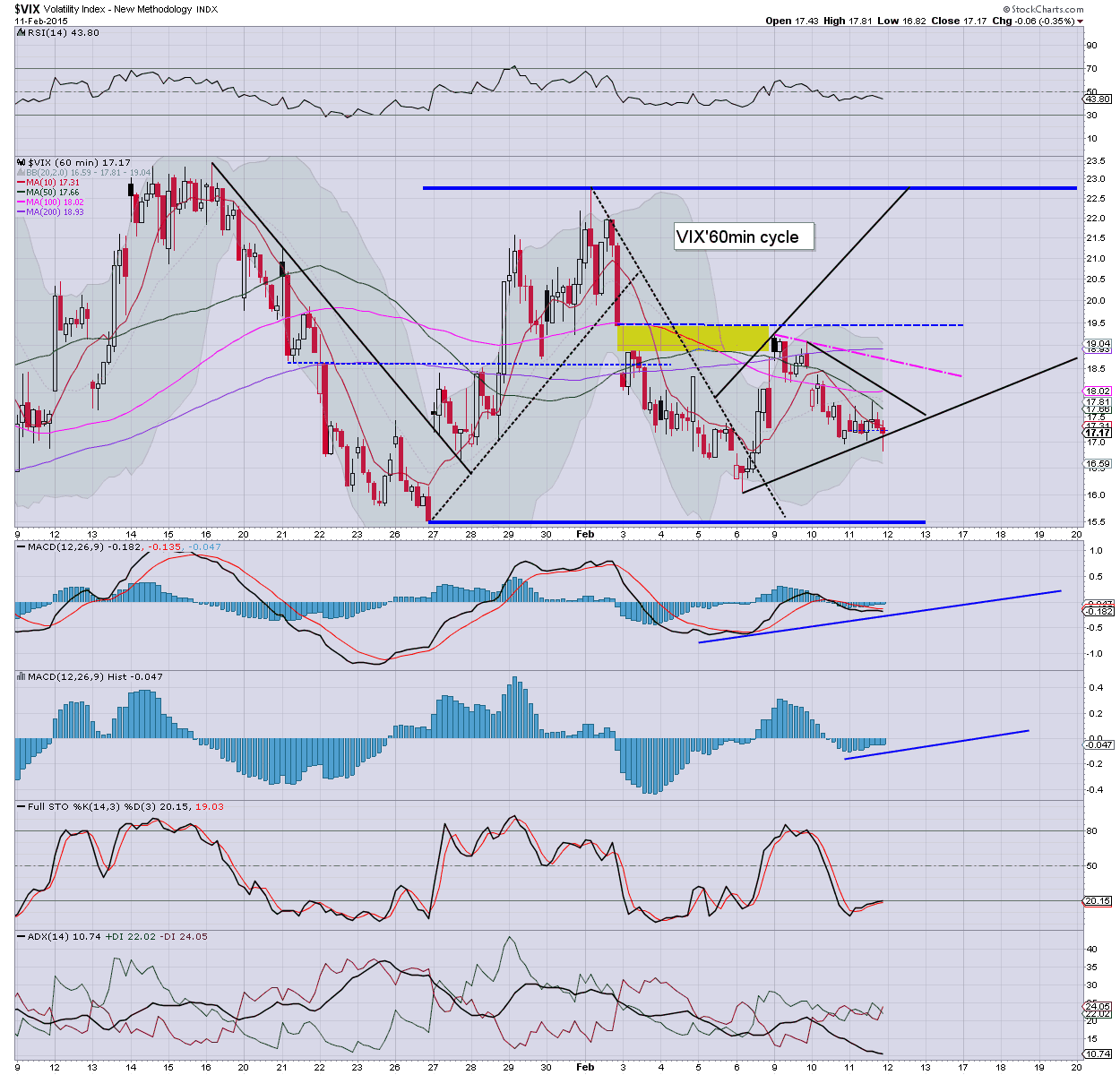 *a really messy closing hour... with a rather sickening break (if briefly) above key resistance of sp'2072.
--

Another pretty tedious day.. as Mr Market is trying to fathom whether there will be an agreement between Greece and the rest of the EU.

It would seem likely the Greeks will stretch this out into the latter part of February, at which point Germany will likely concede something... and reach a lame compromise to kick the can another year or two.

Equities are seeing renewed strength on an updated ceasefire call for the Ukraine... but remain under key resistance of sp'2072. VIX remains choppy in the mid 17s. Metals are set to close weak, Gold -$13, with Silver -0.6% 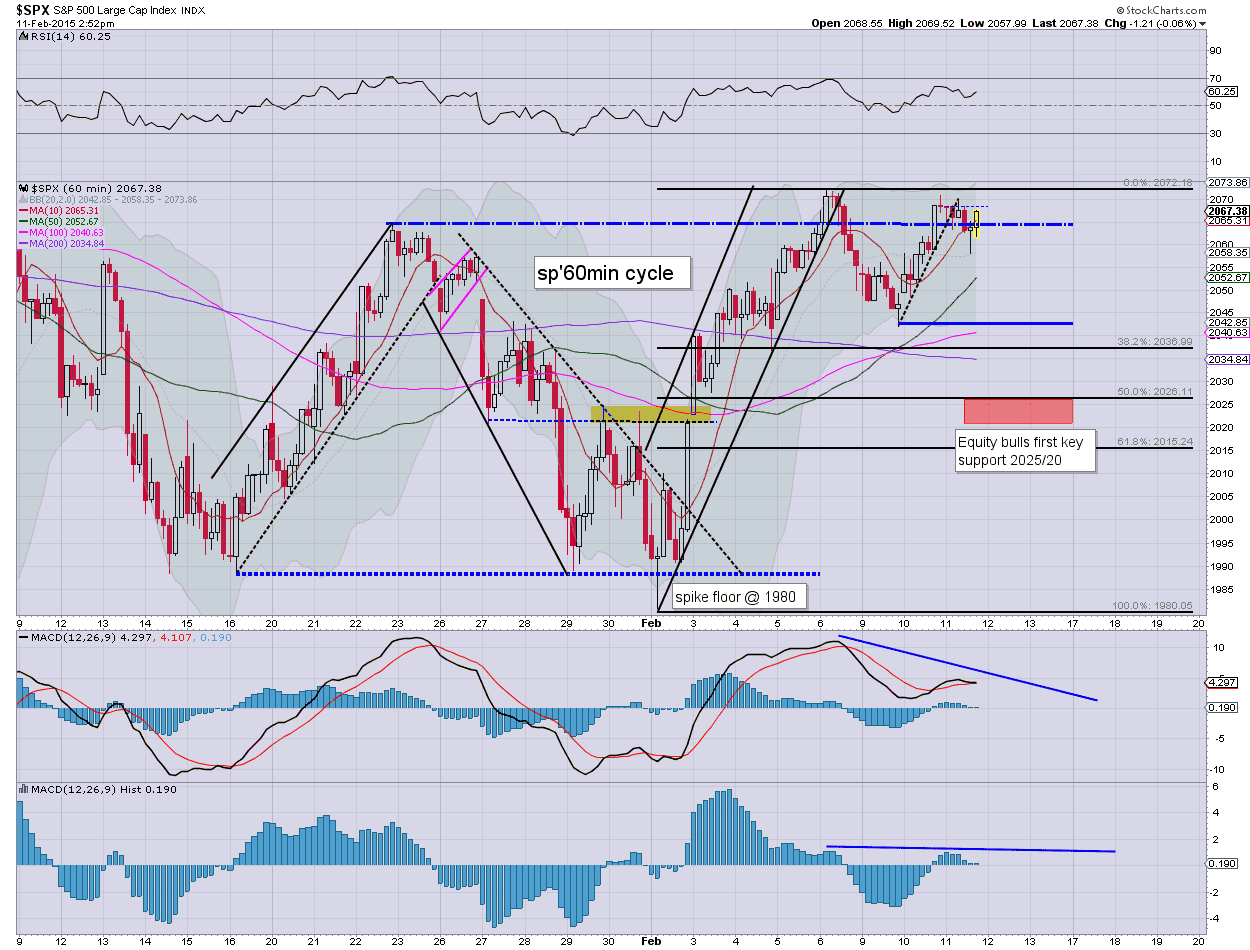 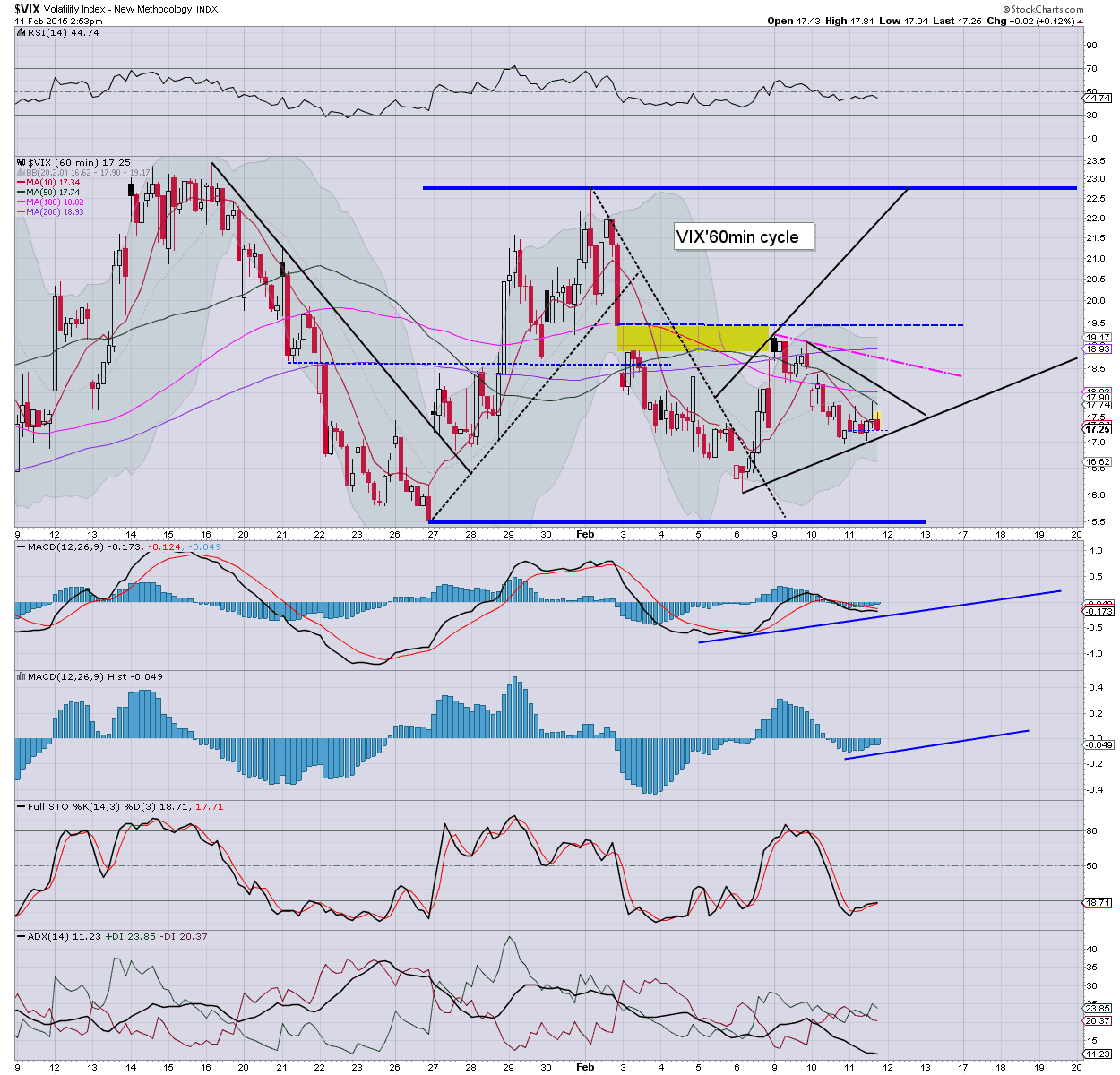 It is a particularly tricky close to call today... not least with sporadic news reports set to kick the market either way.

Lets be clear though, if market can break above 2072... then we'll keep on rising to new historic highs for most indexes.
--

yours tired.... and holding VIX-long overnight.

Barring news that the Greeks are going to refuse an initial deal/compromise.... equity bulls are taking control.... urghh

Without question... damn annoying. and if we don't close <2070.... it bodes badly (at least technically) for the bears into the long weekend.

3.50pm... twitchy price action... indexes set to close flat.. fractionally red... in any case.. bears should be rattled at the break to 2073
Posted by Trading Sunset at 19:54:00
Email ThisBlogThis!Share to TwitterShare to FacebookShare to Pinterest 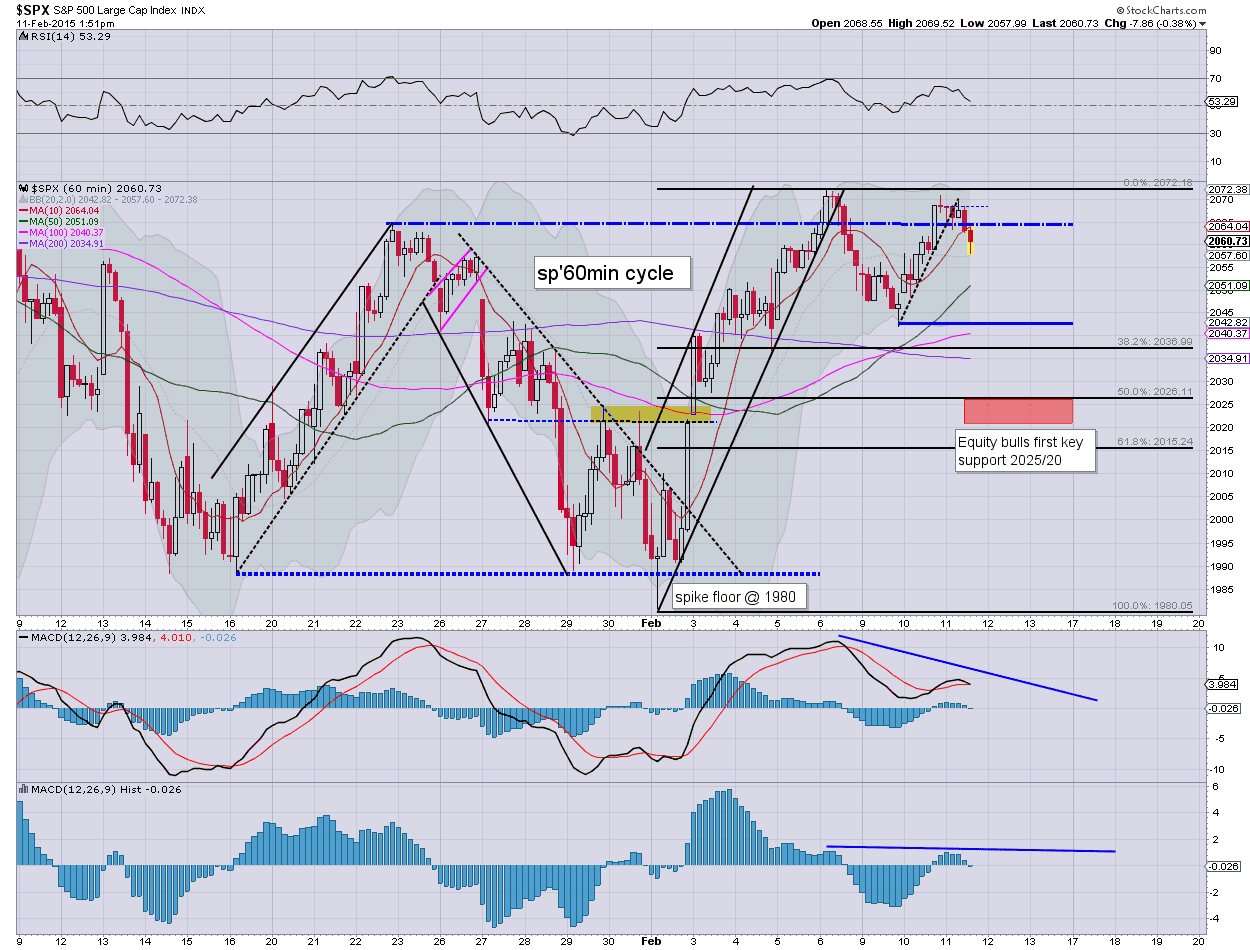 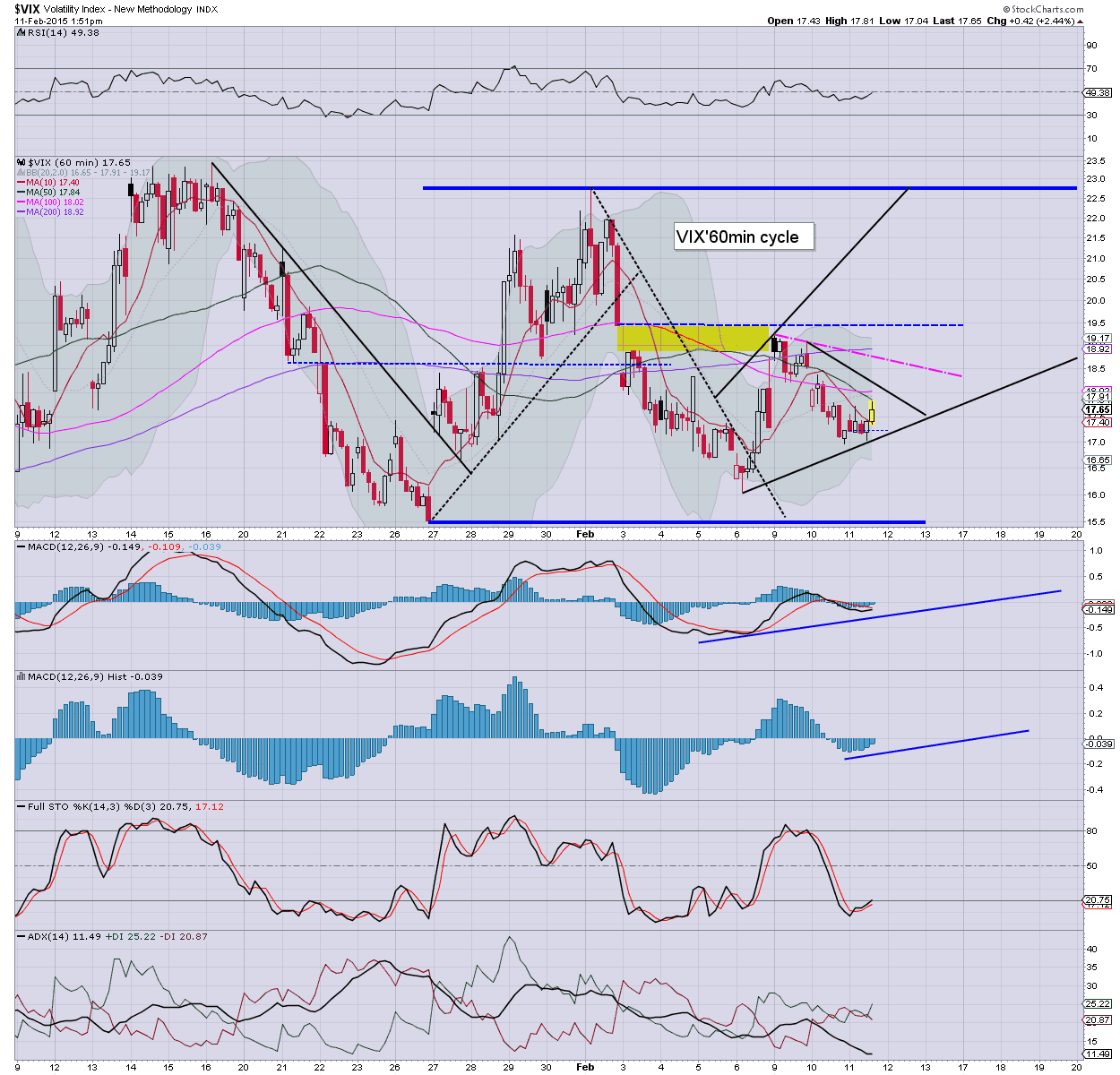 So... a little weakness... and the recent downside target zone of 2025/20 remains viable by the weekend, although it sure is taking longer than expected.

With 2hrs still left of the trading day, there is plenty of time for the market to unravel.


2.12pm.. It would appear the market rallied on a news report that there is a renewed ceasefire agreement for the Ukraine. Yeah... that is clearly working out just fine for those locals as the chemical plants light up at night like a tactical nuke or MOAB...

--
stay tuned
Posted by Trading Sunset at 18:53:00
Email ThisBlogThis!Share to TwitterShare to FacebookShare to Pinterest

US equities continue to see minor chop.... with Mr Market awaiting some initial comments from the EU meeting that has just begun. Metals remain weak, Gold -$10, whilst Oil is clawing back upward from early lows, -2.6% 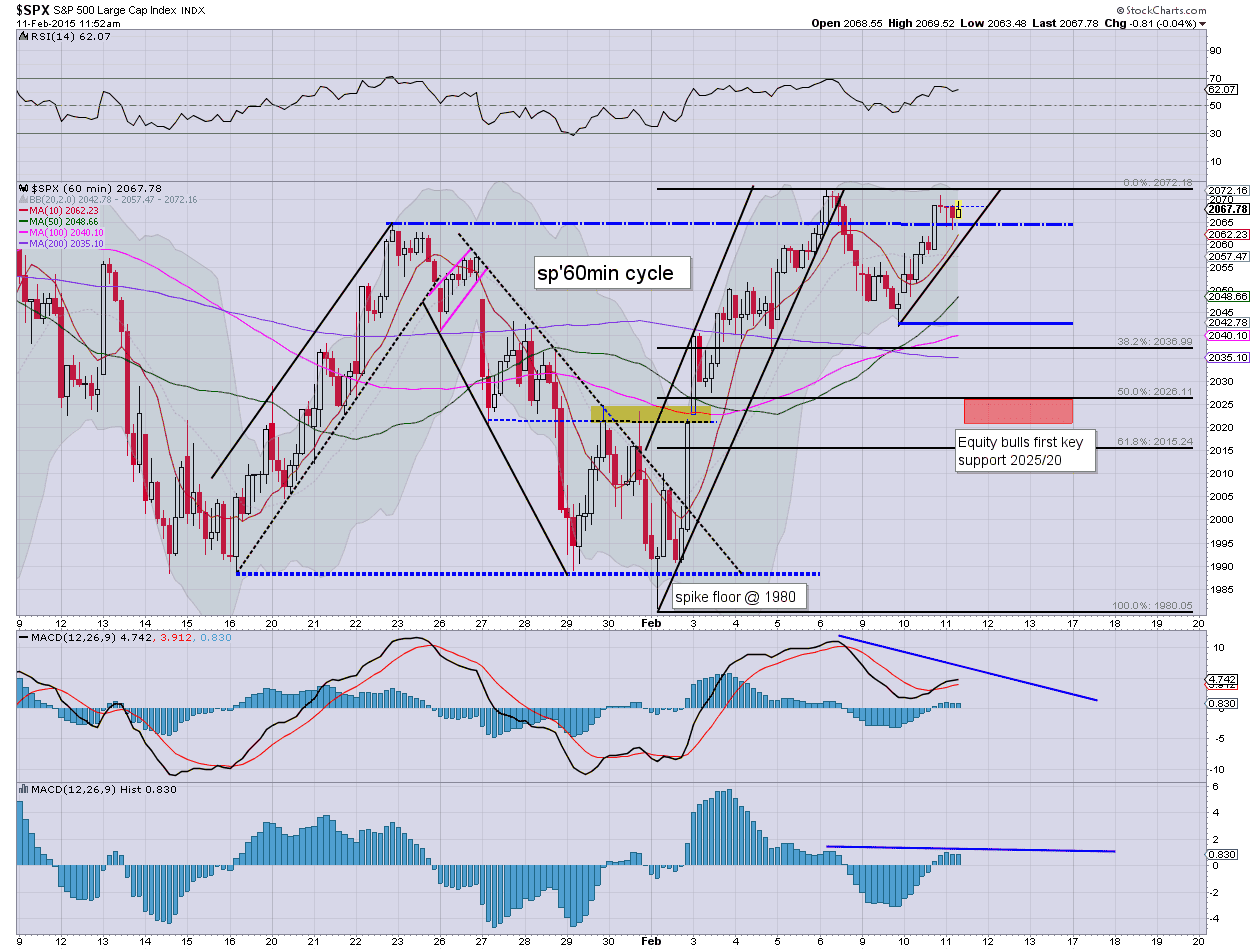 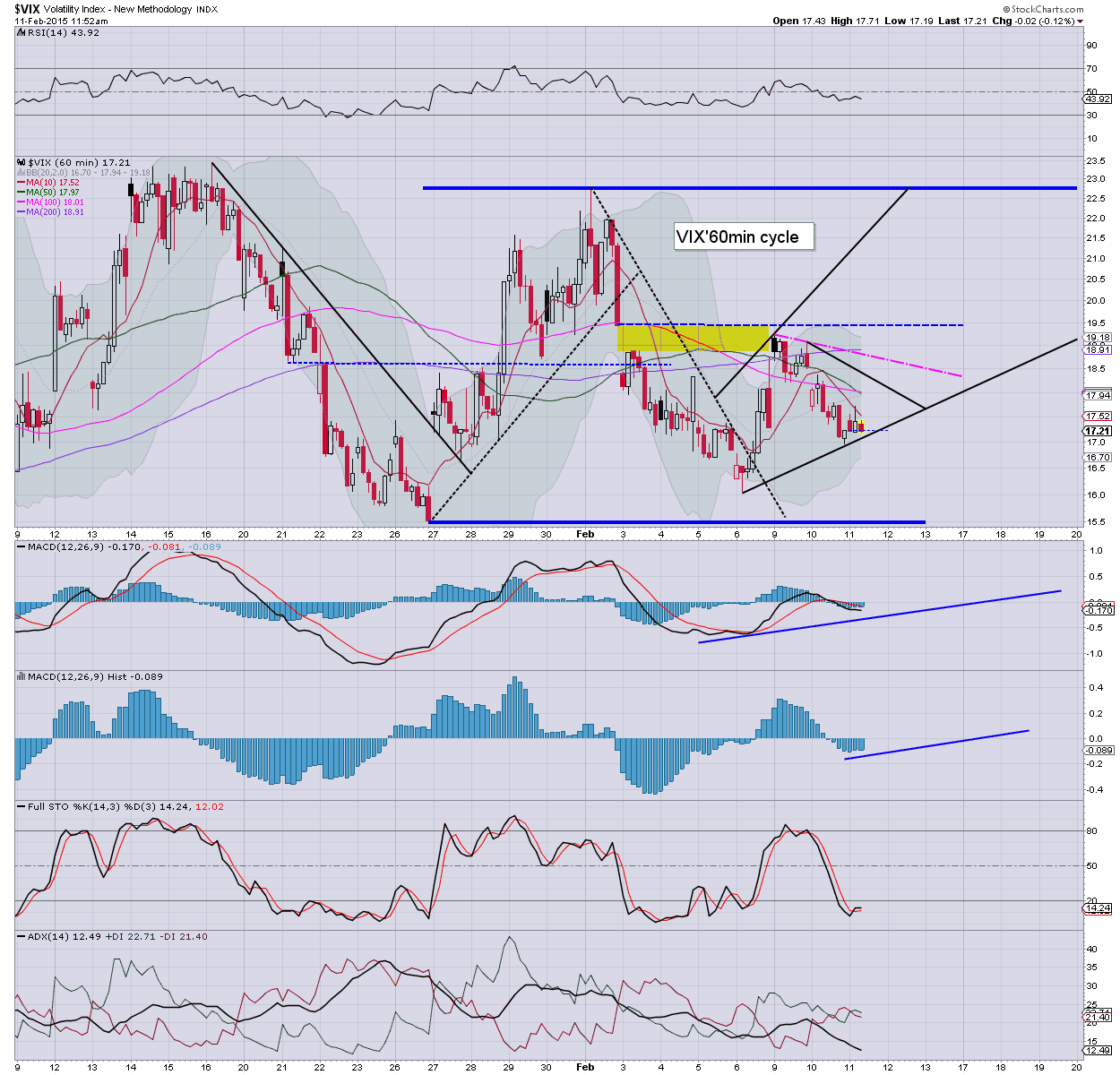 Suffice to say.. we're now in a holding pattern... awaiting the first news reports... but that could be some hours away. Indeed, the real reaction might not be until tomorrow.

*In any case, considering the hourly cycles... I've picked up a speculative VIX-long position. Have dropped an SLV-short, although will look to pick that up again in a day or two... broader trend for metals remains weak.
--


--
back at 2pm
Posted by Trading Sunset at 16:54:00
Email ThisBlogThis!Share to TwitterShare to FacebookShare to Pinterest

11am update - the charts offer trouble this afternoon

The hourly equity MACD cycle is rolling over... set to turn negative into the afternoon. From a purely 'chart perspective', the sp'2020s remain a viable target by late today. Such a sharp drop will require some 'fiercely spooky' news updates from Brussels. 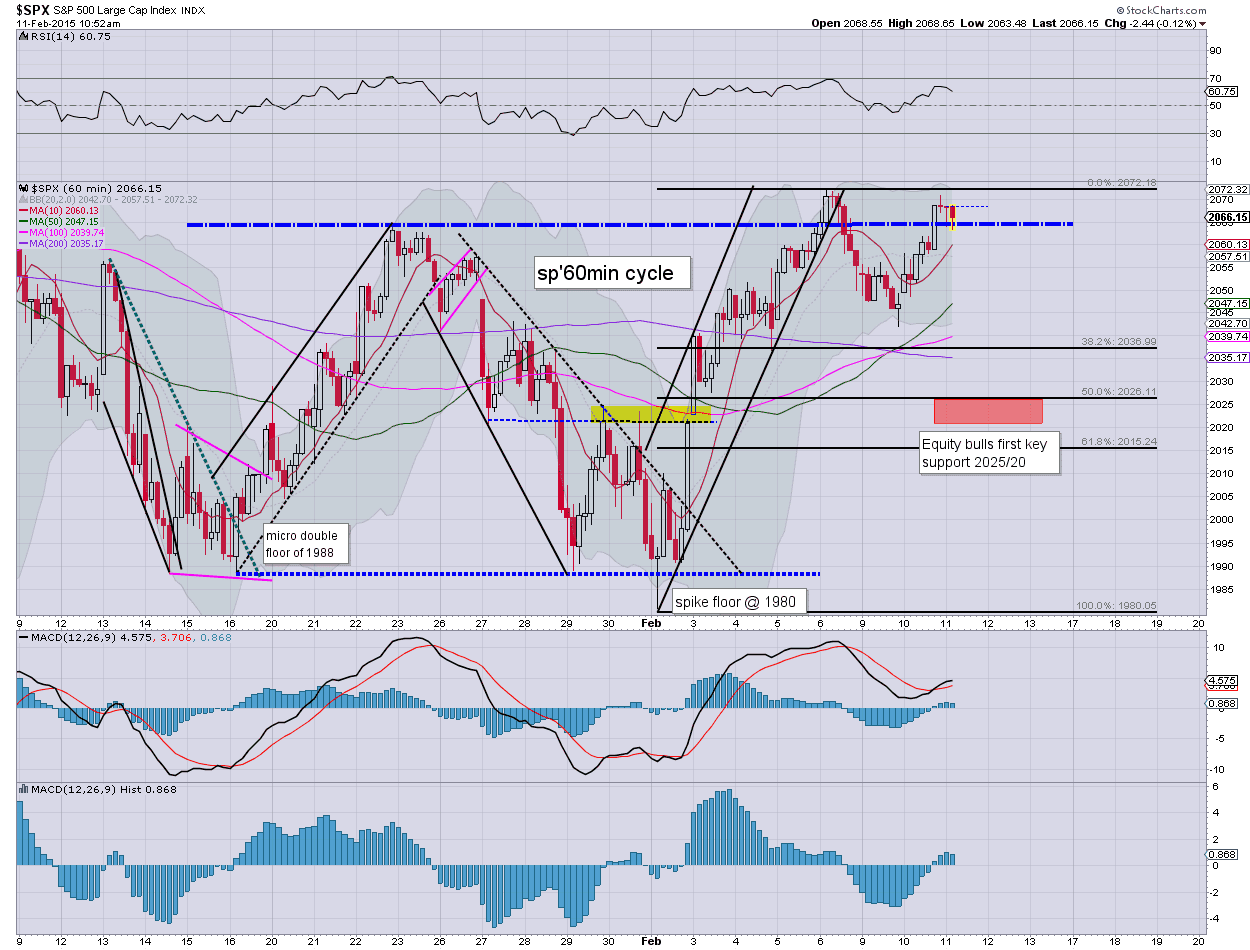 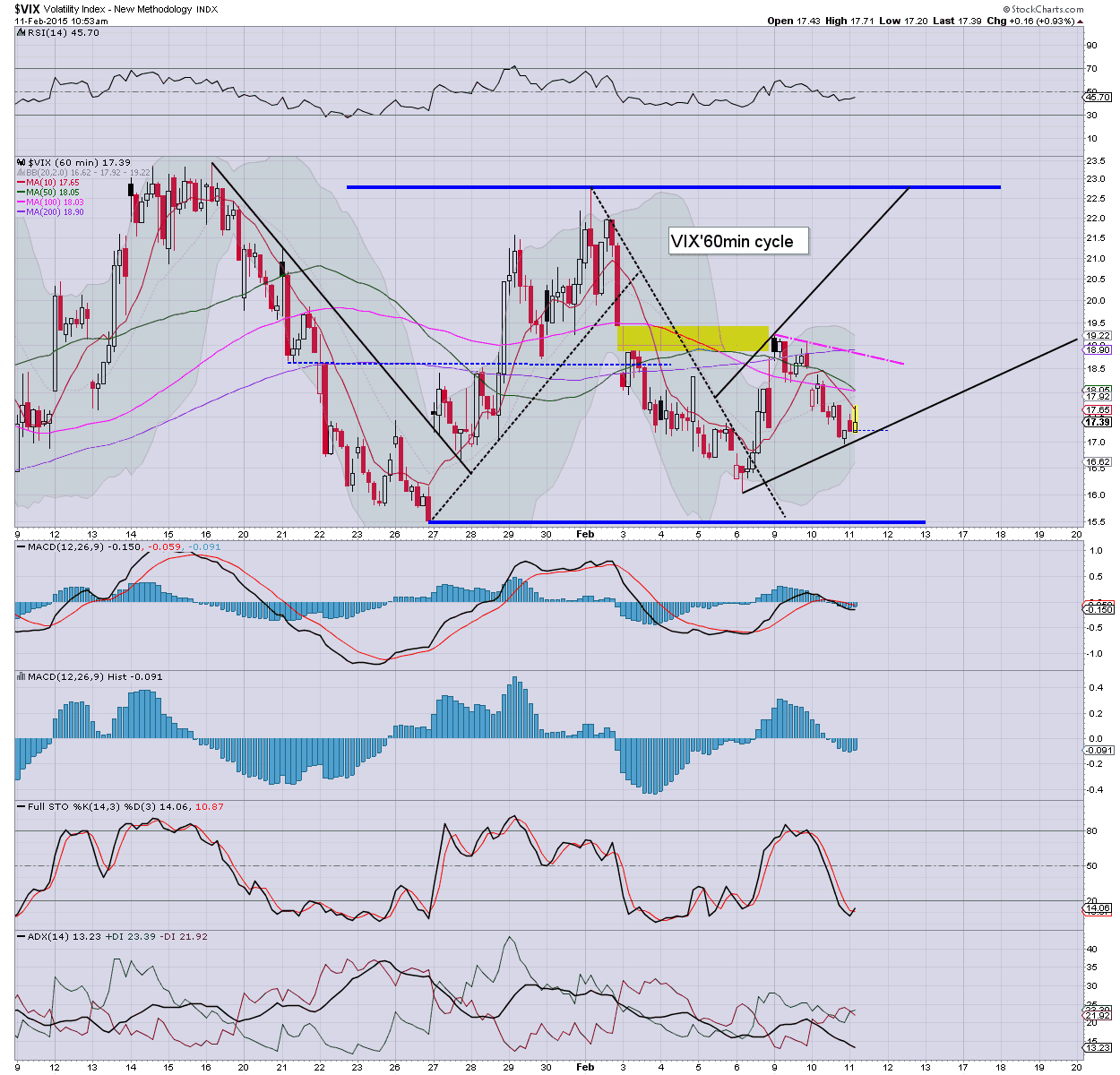 I realise the sp'2020s look a crazy downside target by end of today... but it is possible. In terms of VIX.. that would likely equate to 21/22s.

Certainly.... stay tuned.... and be mindful of a very sharp snap lower on 'ohh noes' news. For those in the market today.... it is a highly dangerous day.
-

11.06  EXITED SLV- short... looking vulnerable to bouncing... not least if Gold jumps on any 'spooky news'.

Certainly.... will be 'interesting' if market starts to slide.

*TSLA remains weak, -3%
Posted by Trading Sunset at 15:58:00
Email ThisBlogThis!Share to TwitterShare to FacebookShare to Pinterest

US equities open a little lower, but its certainly nothing significant, despite the continuing Greek concerns. Metals are on the slide...set to lose the 50dma, Gold -$3. Oil is very weak ahead of the latest inventory report, -2.9% 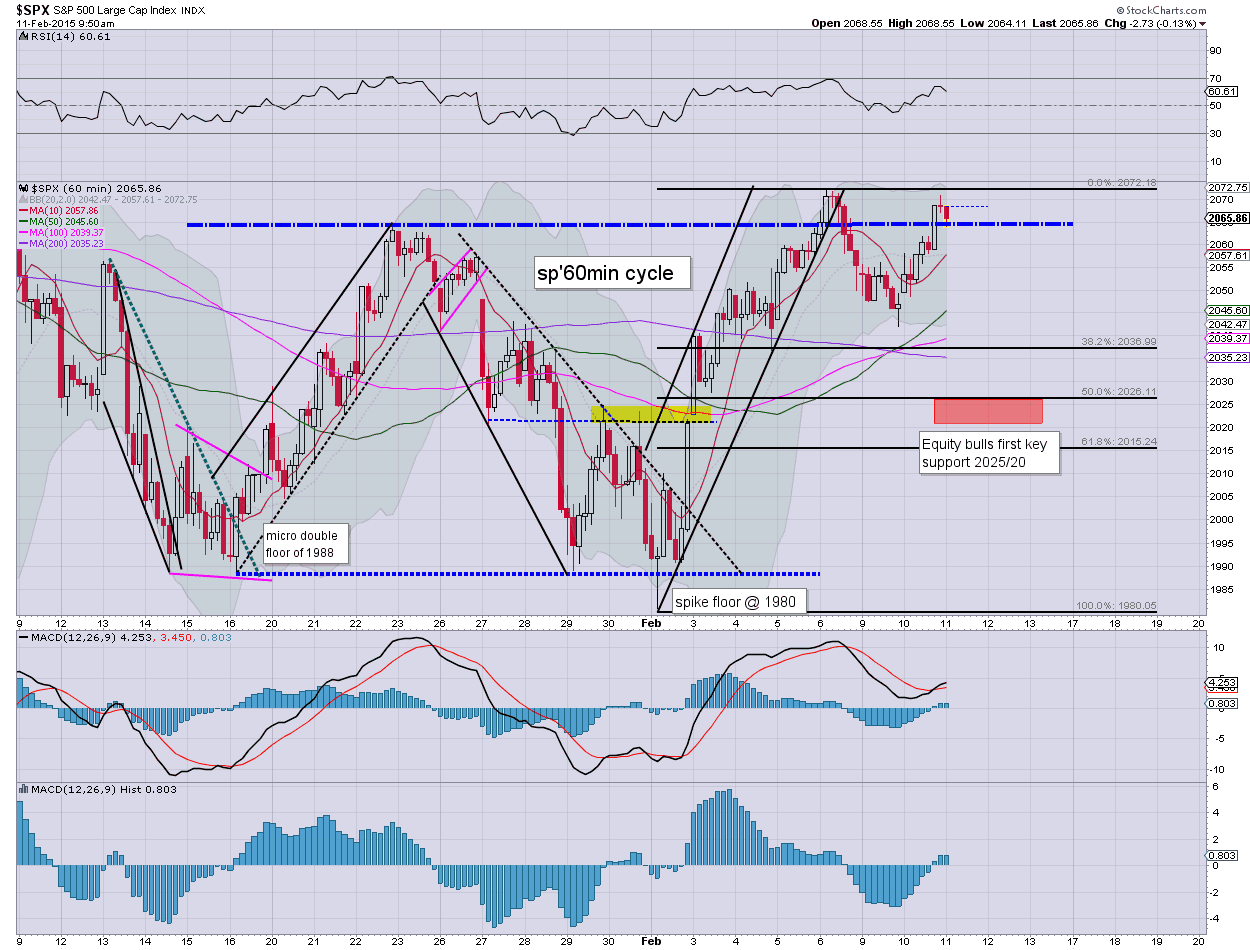 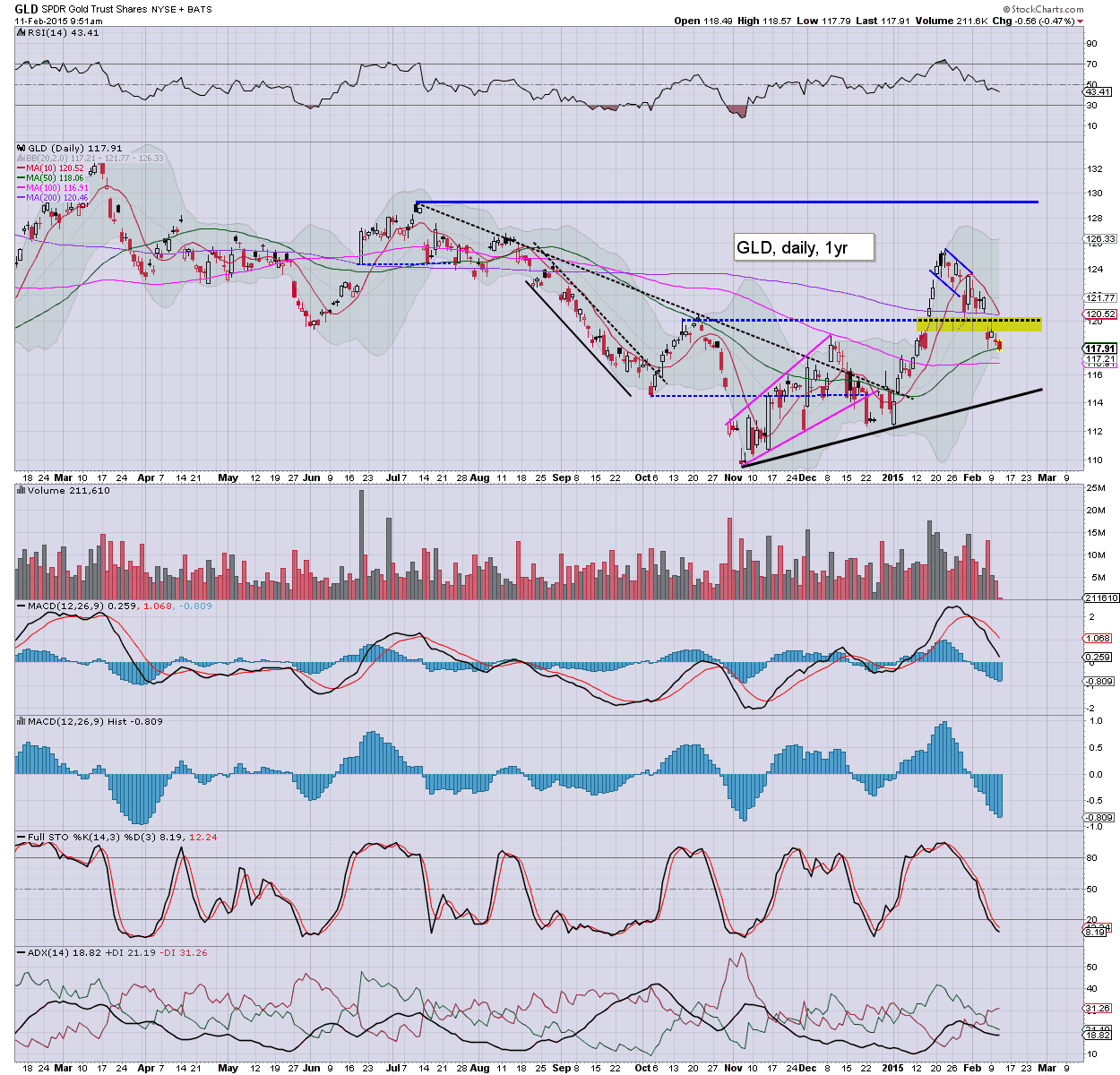 So.... market is a touch lower, but is clearly going to strongly react to any Greek headlines later today.

Good morning. Futures are moderately lower, sp -4pts, we're set to open at 2064. Metals are a little higher, Gold +$4. Oil continues to slip ahead of the next inventory report, -1.5%. 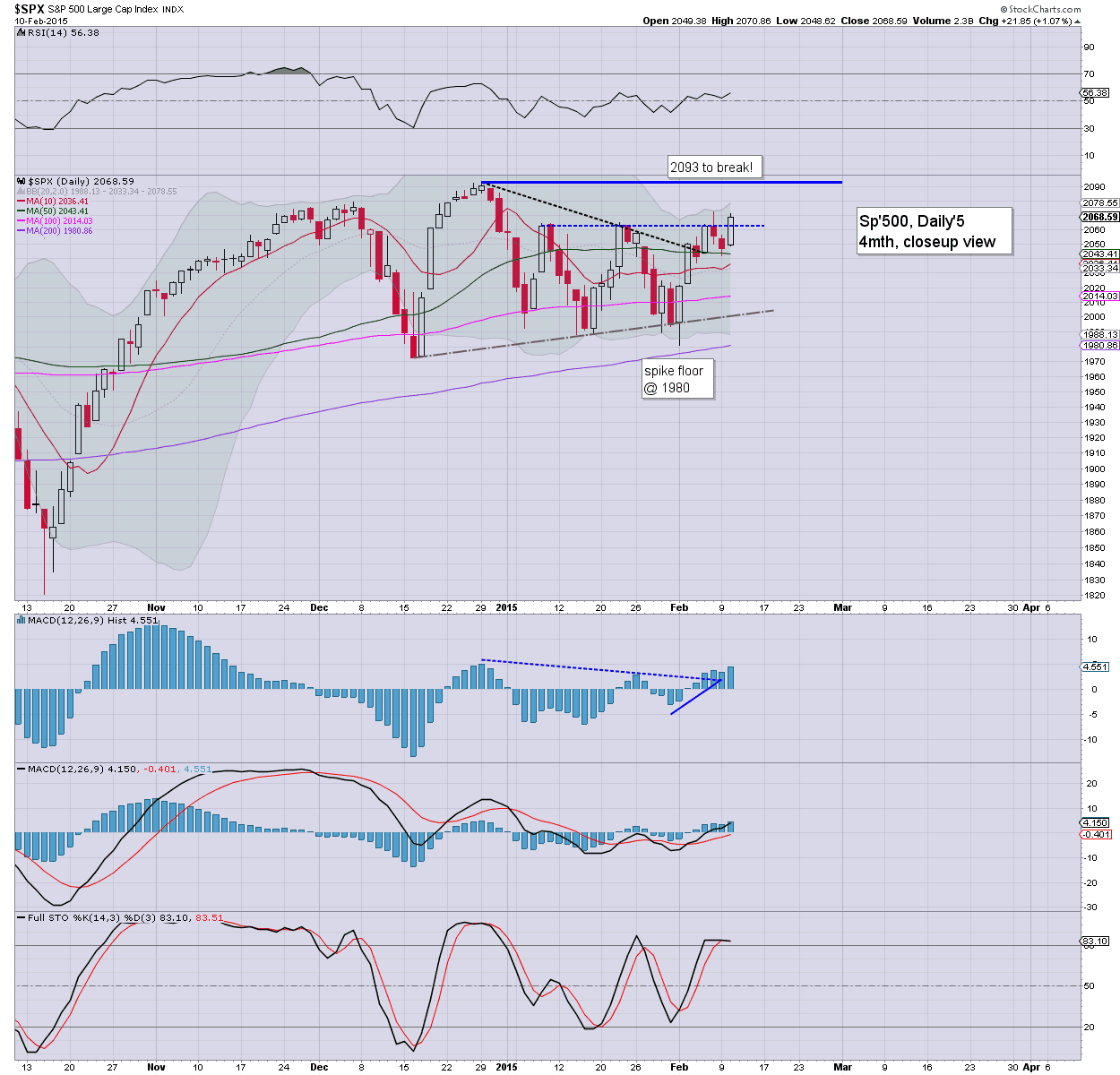 *another night of little sleep.... and if I disappear today... its because of that. The coming weekend is a three day one (market CLOSED Monday Feb'16th for 'presidents day')... and frankly... I need a break.
---

We have a possibly very busy day ahead.  There will be talks in Brussels as the Greek finance minister tries to broker a deal.

The amounts involved are frankly trivial, but Germany and other EU states are getting real tired of their weakest member. However, the problem is that if Greece leaves... Spain/Portugal would almost certainly follow, and it is the possibility of Spain leaving that is the real issue here.

On balance... more 'can kicking' is likely... if only to drag this out for another year or so.
--

As noted though... I would guess a deal is reached this week... to buy more time. After all, why would the EU want a financial/political crisis this month... or next?
--

*most traders should be mindful of the EIA report at 10.30am, if inventories come in at 3-5 million barrels surplus, then Oil will surely be pressured lower... and that will (usually) put some pressure on the broader market.

Doomer chat - Hunter with the Schiff

Good wishes for Wednesday trading
Posted by Trading Sunset at 13:00:00
Email ThisBlogThis!Share to TwitterShare to FacebookShare to Pinterest

No floor yet for Oil 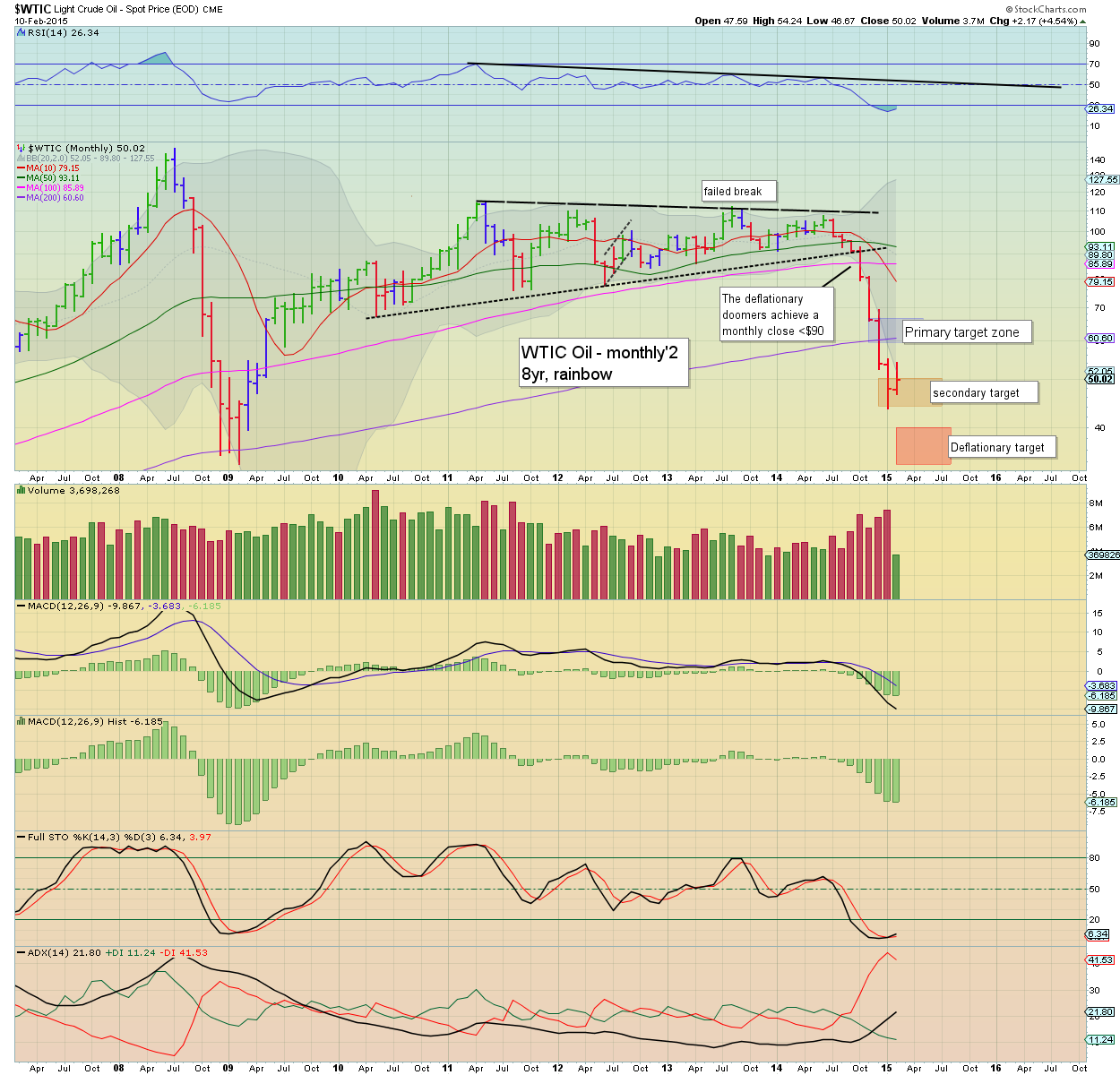 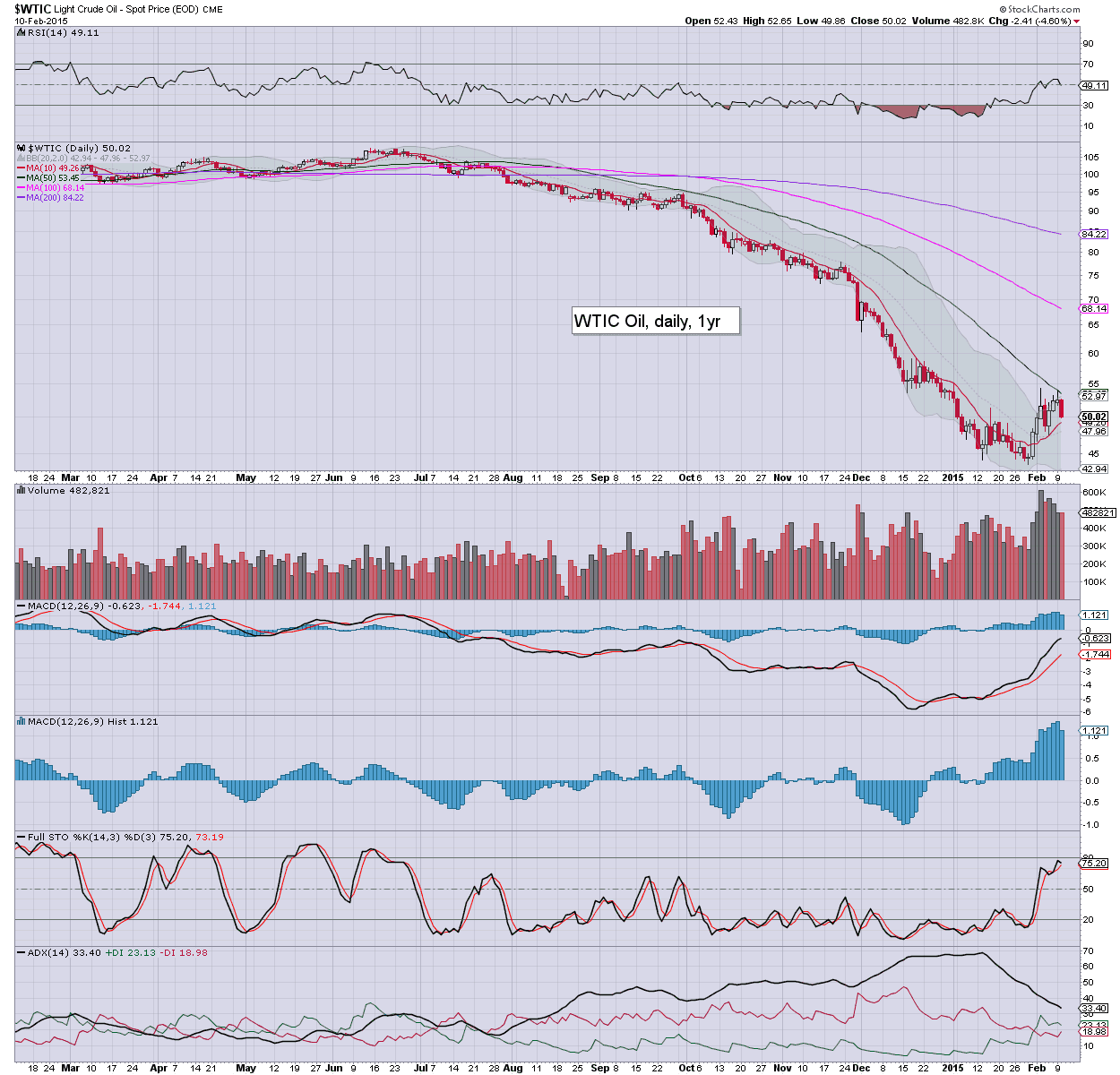 Suffice to say... no clear sign of a turn/floor yet.. not least with no indication that global oil supply is being cut.
-

Wed' will see Fed official Fisher in NYC, speaking (8am) on Monetary policy.

The only data of note will be US Treasury budget.. but these days.. few care about that.

*Oil traders should be mindful of the latest EIA report at 10.30am... another big increase in inventories would give the market the excuse to knock prices into the 48/47s.
- 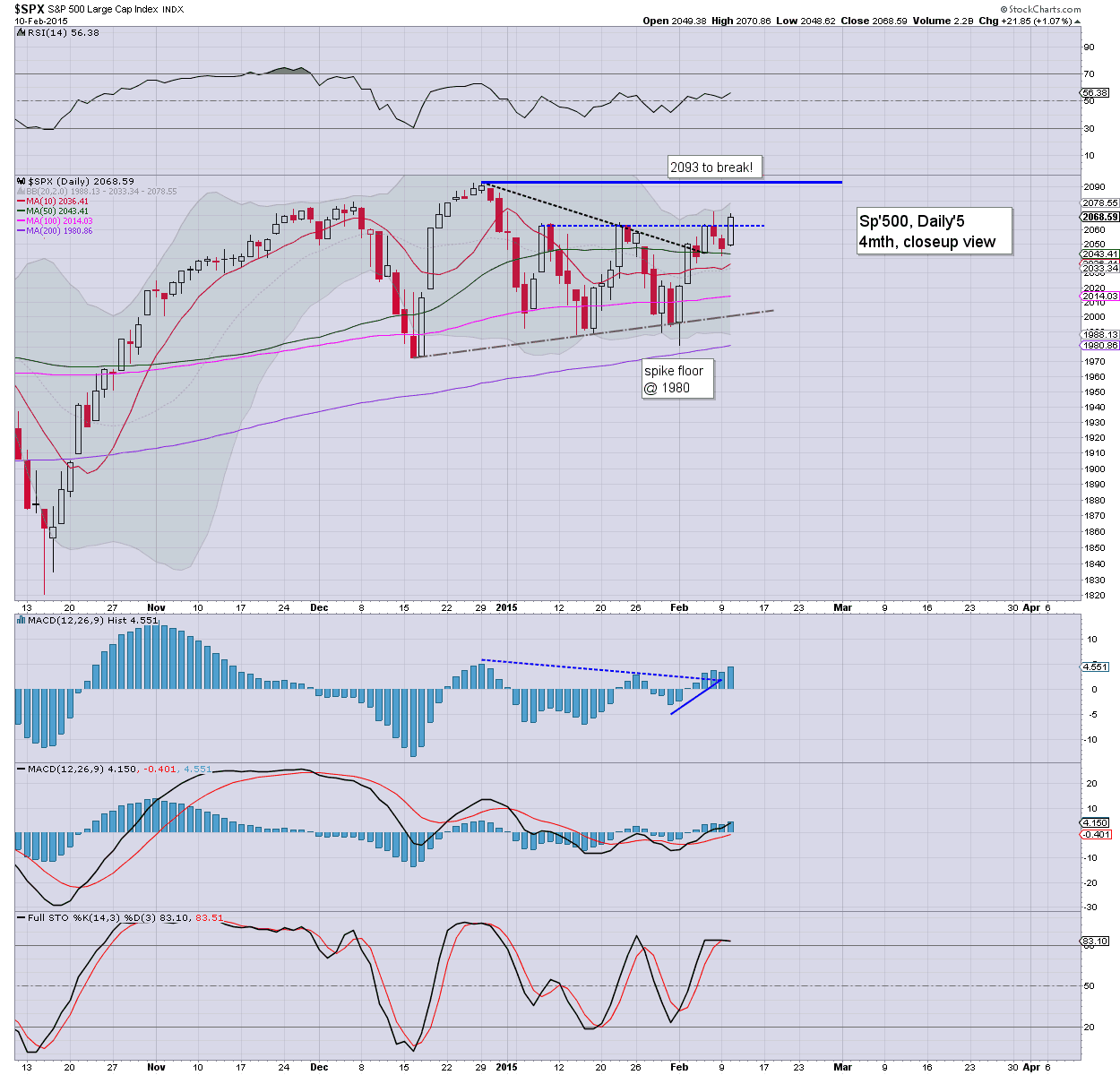 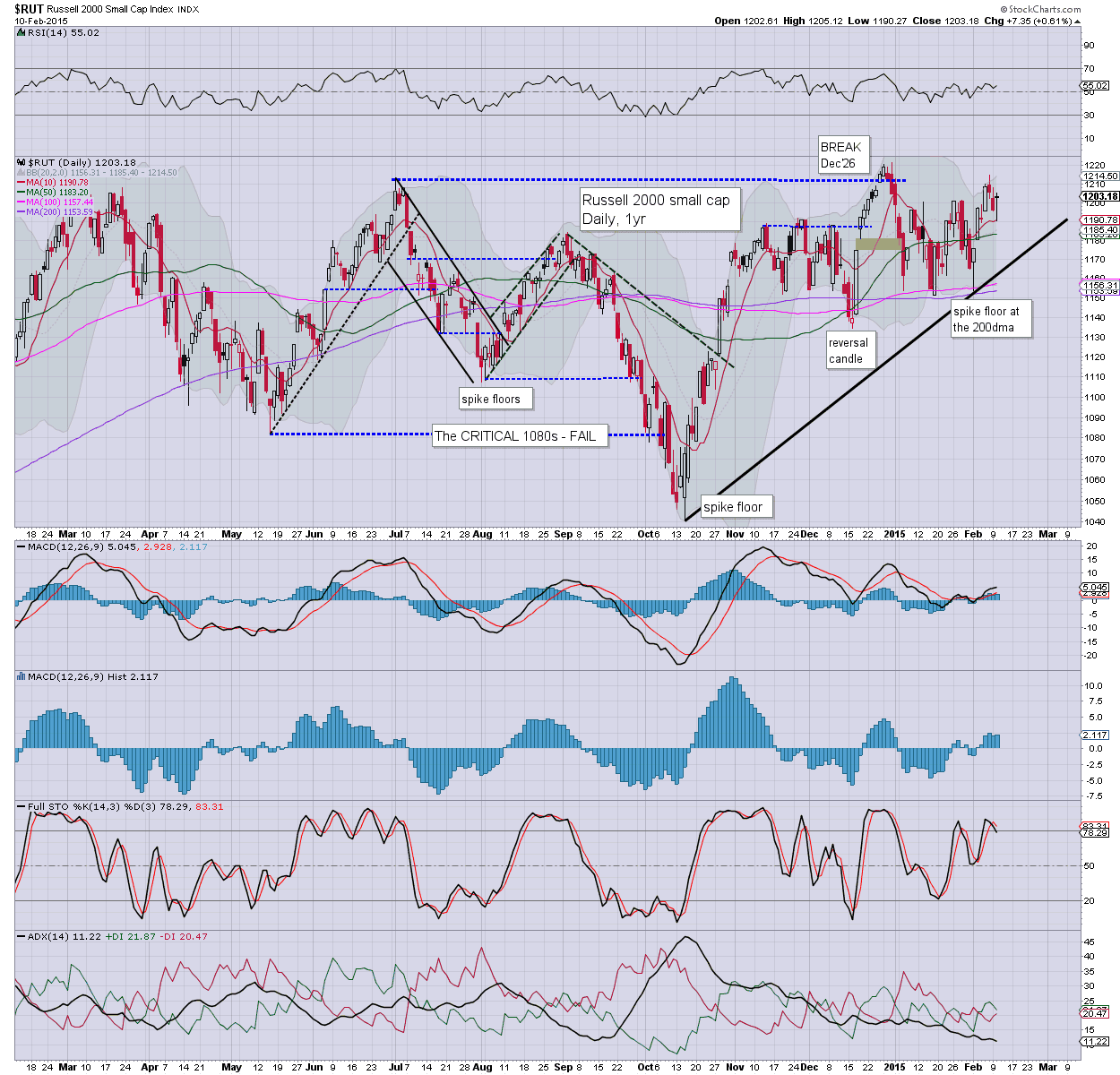 Market had a surprisingly strong day, after opening gains that largely failed.. but from sp'2048, the market appears to have benefited from a relentless short-stop cascade.

The R2K saw a particularly strong reversal, having been lower by -0.5% in the morning, but closing with a rather bullish spike-floor daily candle.
--