Despite a multi-week decline from sp'1850 to 1737, the US indexes are still holding within their broader monthly up trends. The one exception is the Dow, which has seen a brief marginal break, but which is now net positive on the month. The two leaders - Trans/R2K, remain notably weak. 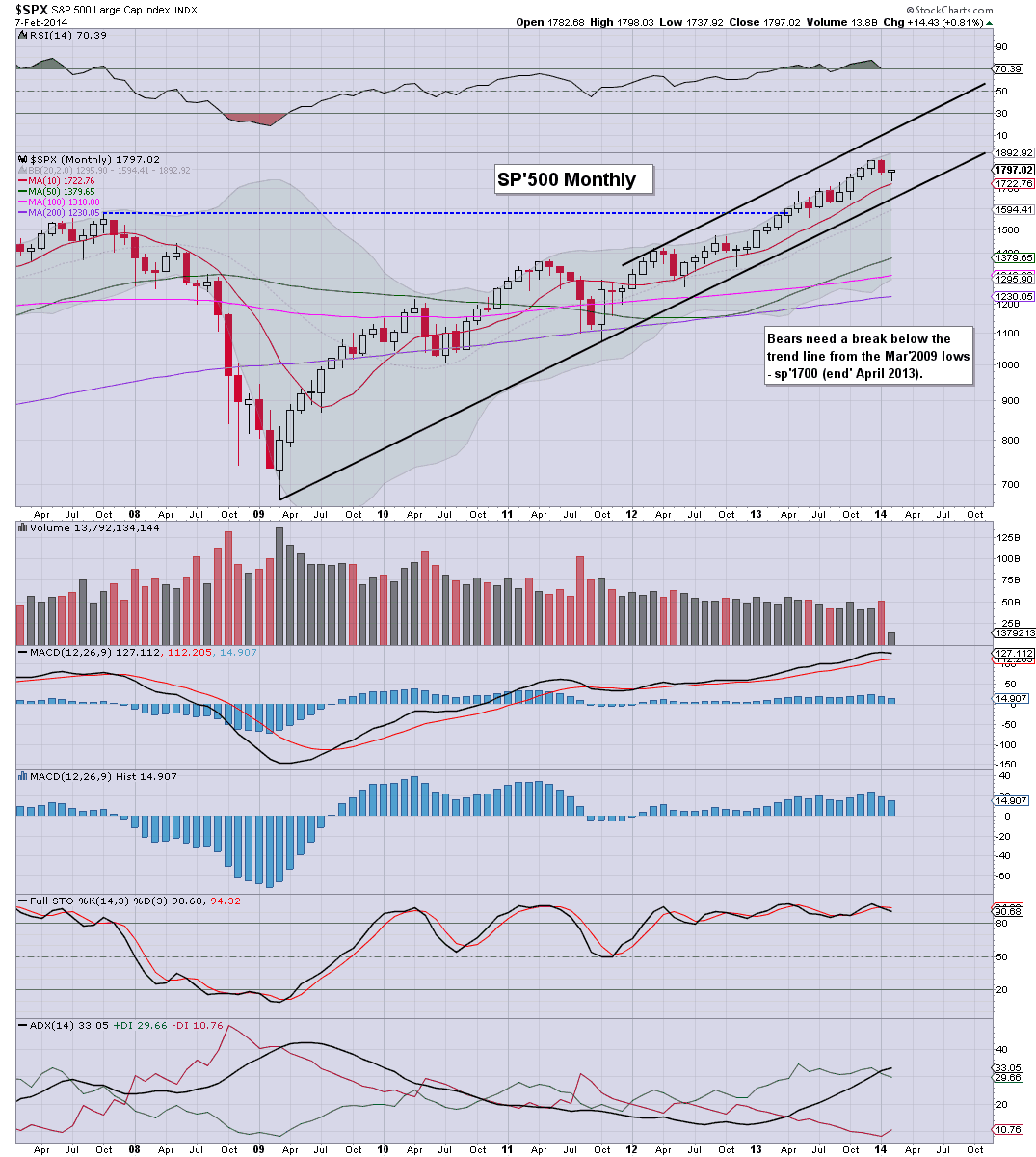 So.. a 6% drop from the 1850 high to 1737, and that looks to be it for this multi-week down cycle. Indeed, it is bizarre to already see a February net gain of 0.8%. The monthly 10MA wasn't even tested this past week, and again, its testament to the underlying upside pressure.

Upper bollinger is offering the 1890s, but that seems unlikely until March, if not April. As a fair few others have also noted, there looks to be viable upside by late spring into the low 1900s. Right now, the big 2000 level does not seem possible before a 'major correction'.

Of course, this 'major correction' is something that many (myself included) thought viable in 2012, 2013..and here we are...still broadly climbing. 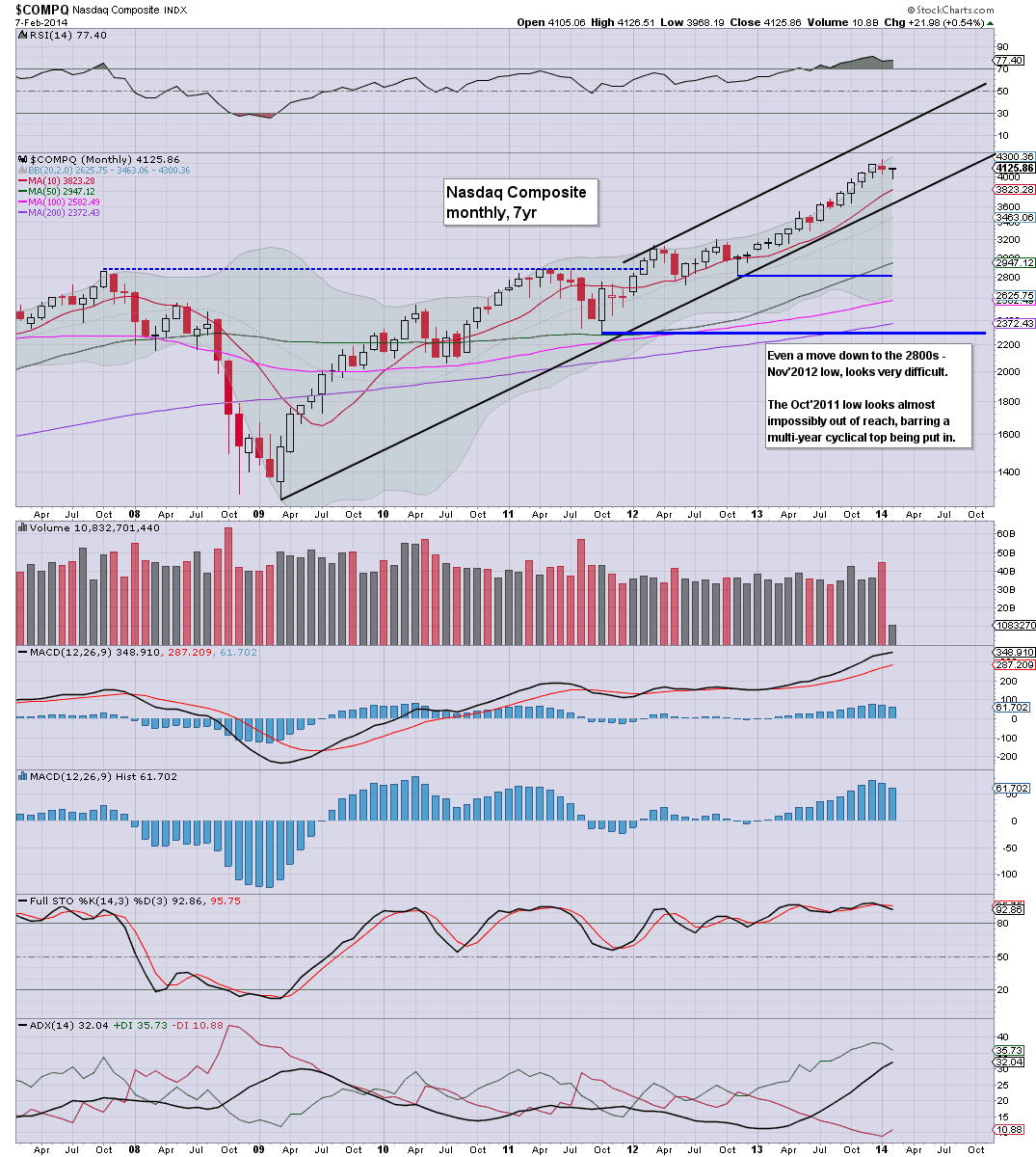 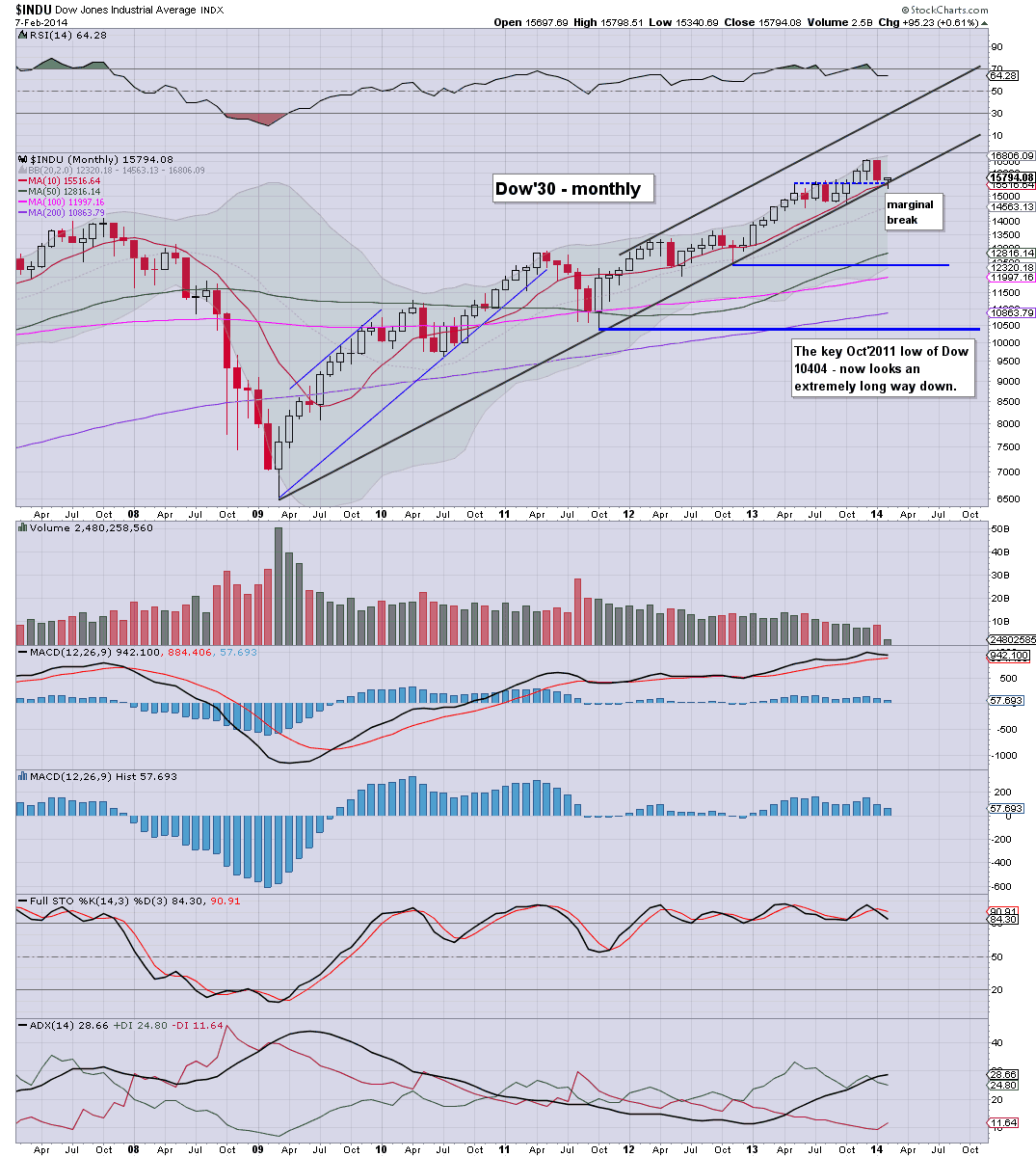 The mighty Dow is notable in that it has broken the trend/support that stretches all the way back to 2009. However, that trend itself was adjusted (by many, not just me!), after a similar marginal break in Nov'2012. The Dow remains weaker than most indexes, and bears should be cautious in placing too much emphasis on it. 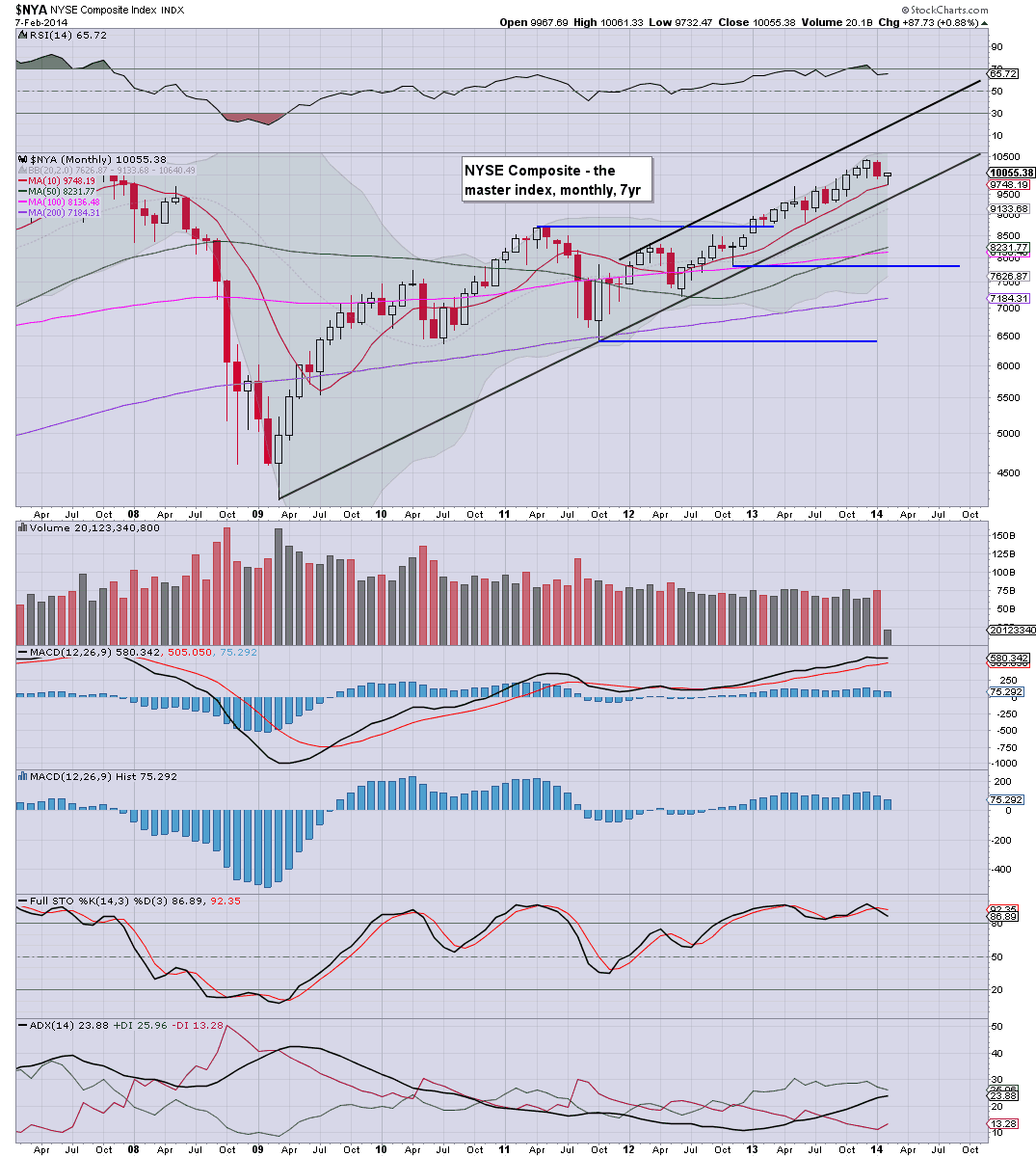 The master index looks strong, and has managed a successful test of the rising 10MA. With the market rallying into the Friday close, the NYSE Comp' reclaimed the giant 10k psy level, and looks set to make a break for new highs in the weeks ahead. Upside looks to be 10700/11000. 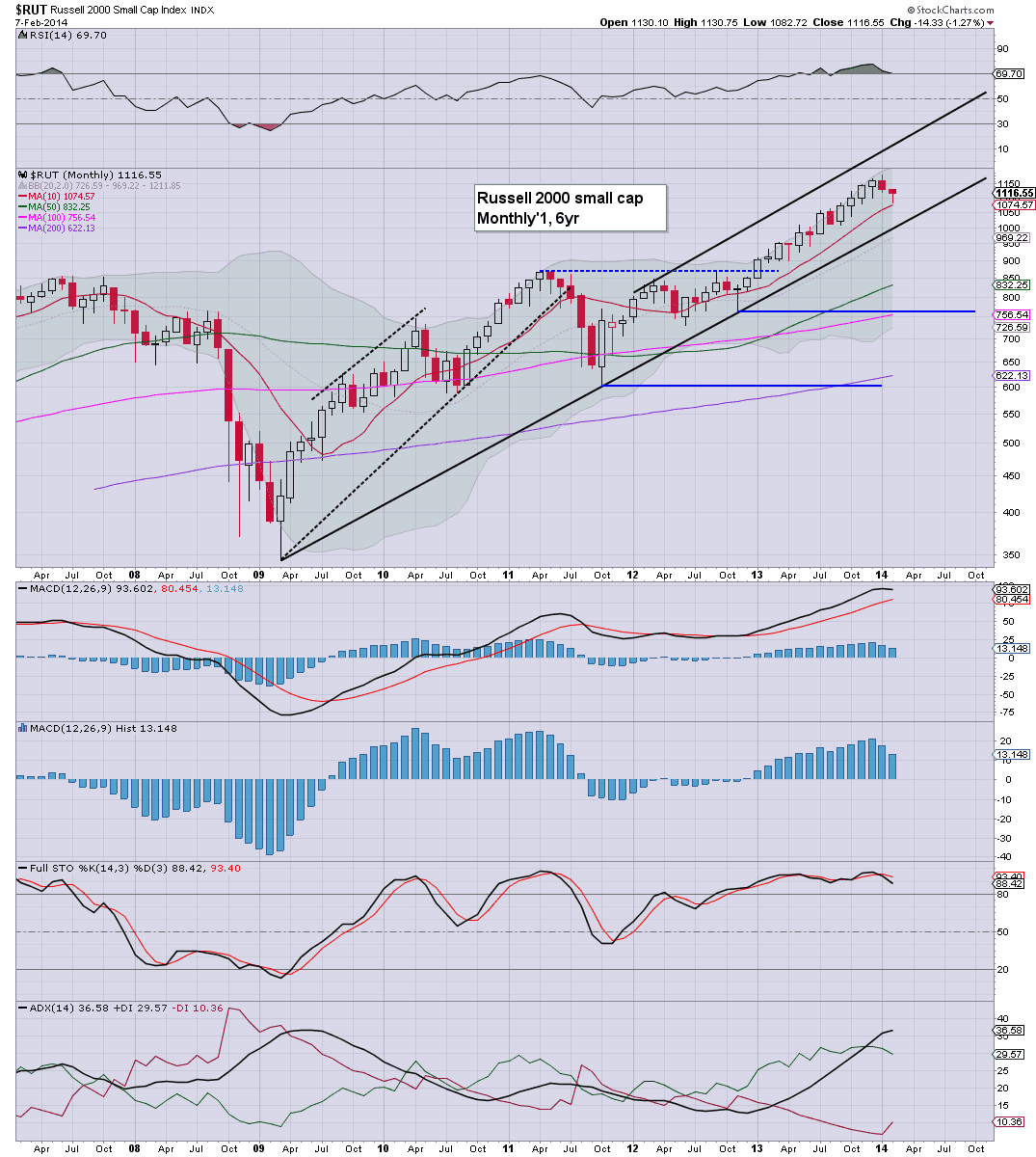 The second market leader is still looking weak, but is importantly holding above the 10MA. Equity bulls should be seeking the R2K - and the Trans, to both flip at least moderately positive by end month. The 1200s should be possible in March/early April. 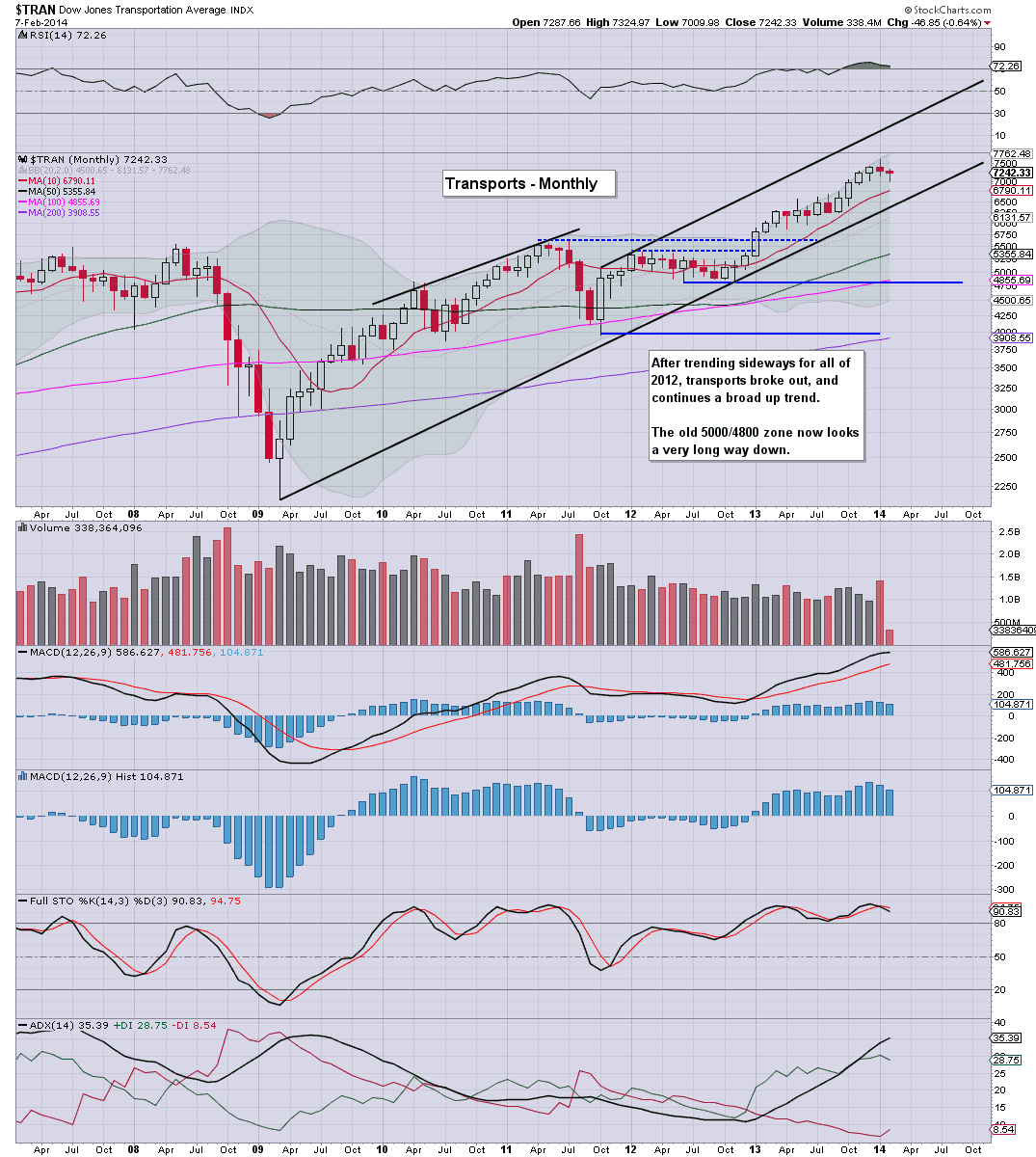 The old leader - like the R2K, is looking weak, but is holding the broader up trend. Despite the major declines earlier this week, the Trans held the big 7k level, and now looks set to make a play for the 7750/8000 zone.

So...what can we make of this? January saw some rather significant declines, and the first half of this past week was most certainly providing strong follow through to the downside. Yet, the VIX has now collapsed from the 21s to the 15s, and the smaller weekly cycles are turning back to the upside.

The two QE-tapers have unquestionably been one major catalyst for the recent US and world equity declines. It is not so much the actual decline in 'new money/liquidity', but the signal from the Fed itself, that 'you're going to be on your own later this year'. That has certainly lead to some major global capital flows, from the emerging markets..back into the US/EU.

It would seem there will be a QE-taper'3 at the next FOMC, but that is not until March'19, almost 6 weeks away. It will be most interesting to see how the market reacts when the QE fuel is reduced to a mere $55bn a month (or so), although yes, that still amounts to a huge annual injection of $650bn.
--

Next week will be largely about the Yellen. She will be giving testimony to the US house/senate next Tues/Thursday, and that will no doubt get blanket coverage on clown finance TV.

The only major econ-data is retail sales on Thursday. The week concludes with consumer sentiment and indust' production. Friday will probably be kinda quiet though, since the following Monday is closed for 'Presidents day'.

Considering the provisional turn seen in the weekly charts (although not yet in the two leaders - Trans/R2K), we now seem likely to resume the original up trend from late 2012.

I suppose the bears could justifiably highlight the Dow for breaking a key trend/support, but its just one index. The other indexes - not least the NYSE Comp' are comfortably holding within their broader up trends.

I myself have been somewhat 'lost in bearish hysteria' this past week. I had noted many times in late 2013, to be mindful of a fall in late Jan/early Feb. As it is, I'm still kinda surprised at the size of the two major declines (sp'500, -38pts, and -40pts) that we saw, along with a VIX surge into the 21s.

It would seem my original 'bullish' weekly8 chart was right all along. 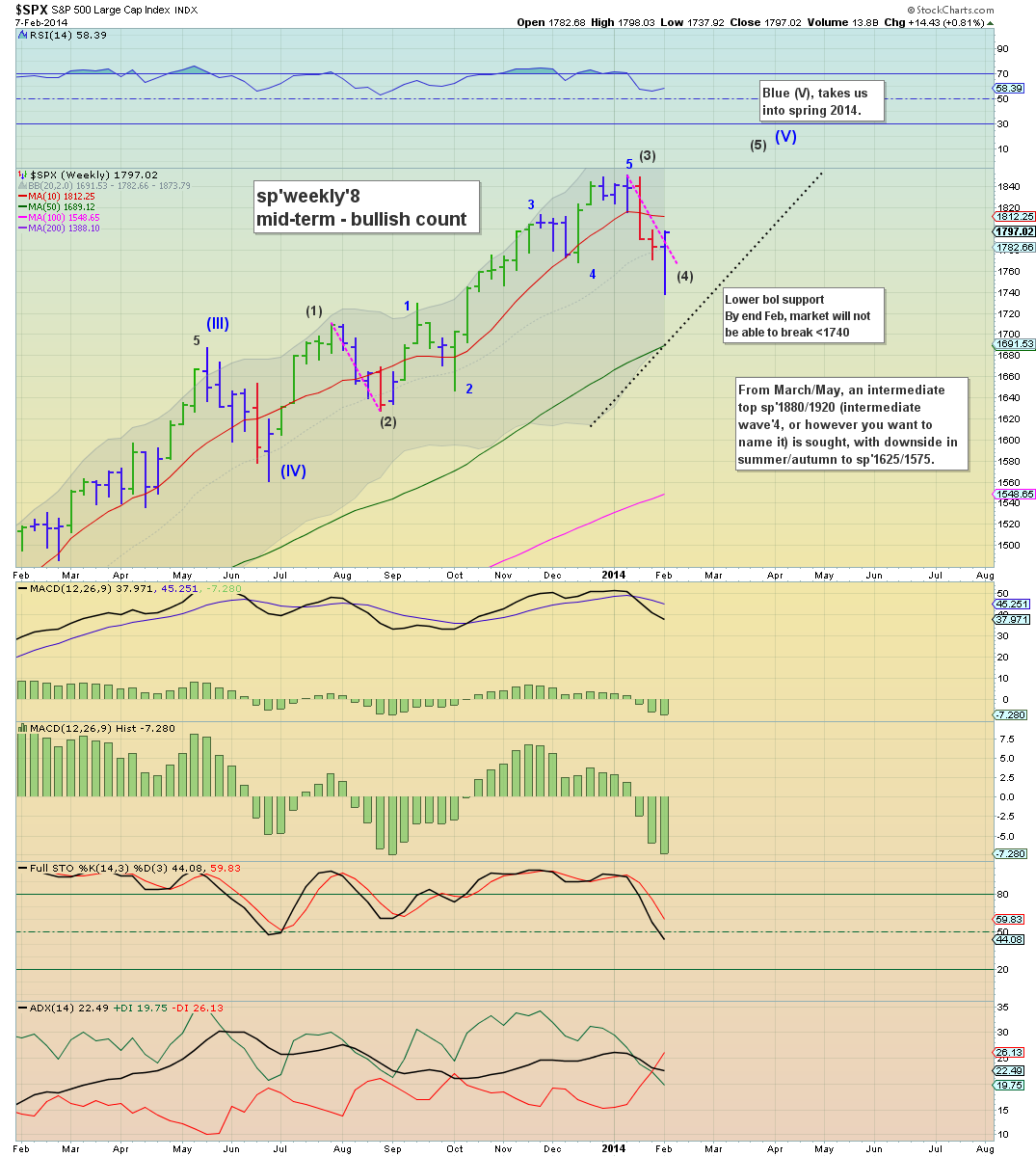 With the failure to hit the lower weekly bollinger in the current multi-week down cycle, I won't call sp'1850 a key top. Indeed, I'll revert to seeking a multi-month peak, somewhere in the 1880/1920 zone...no later than late April. 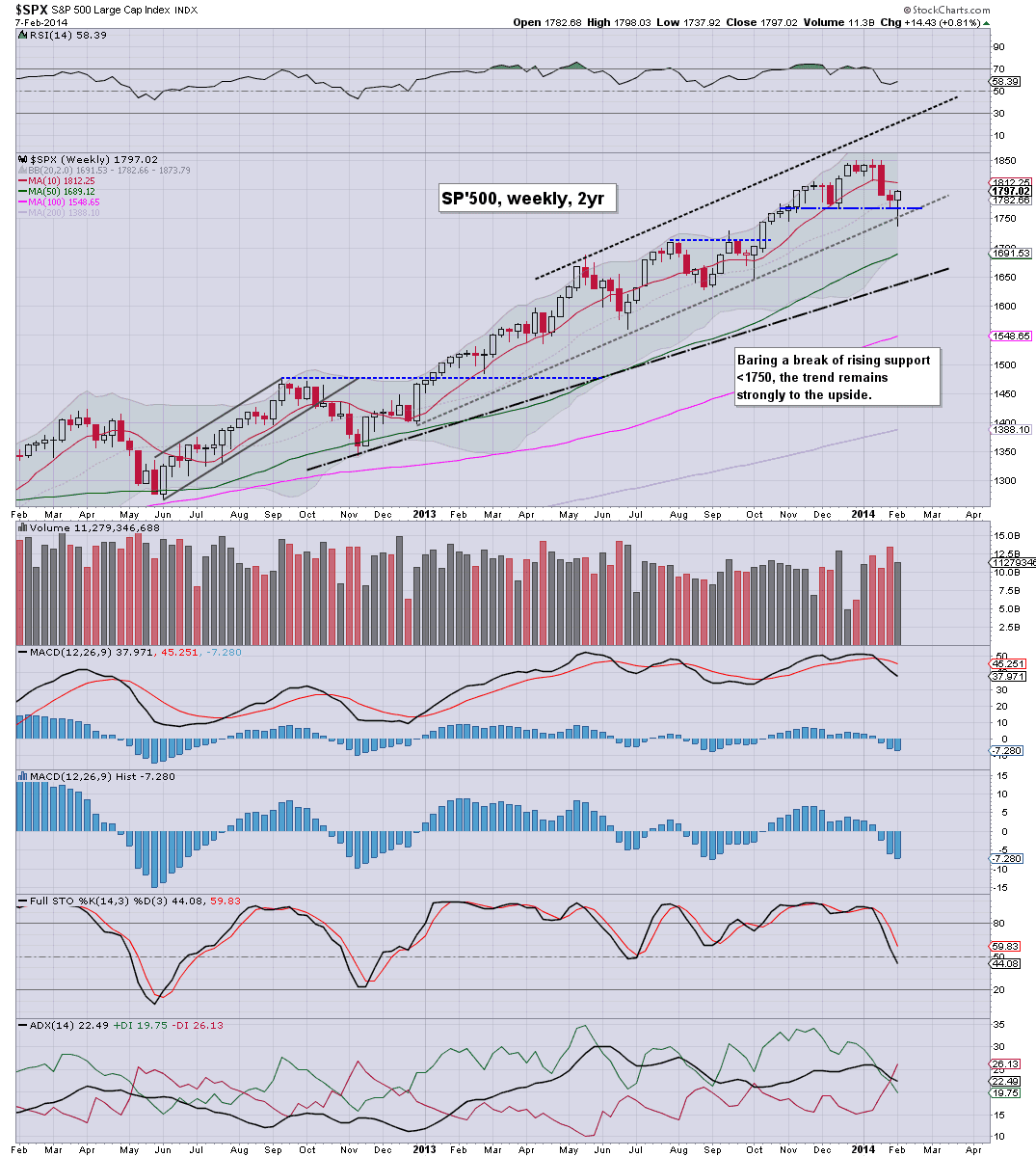 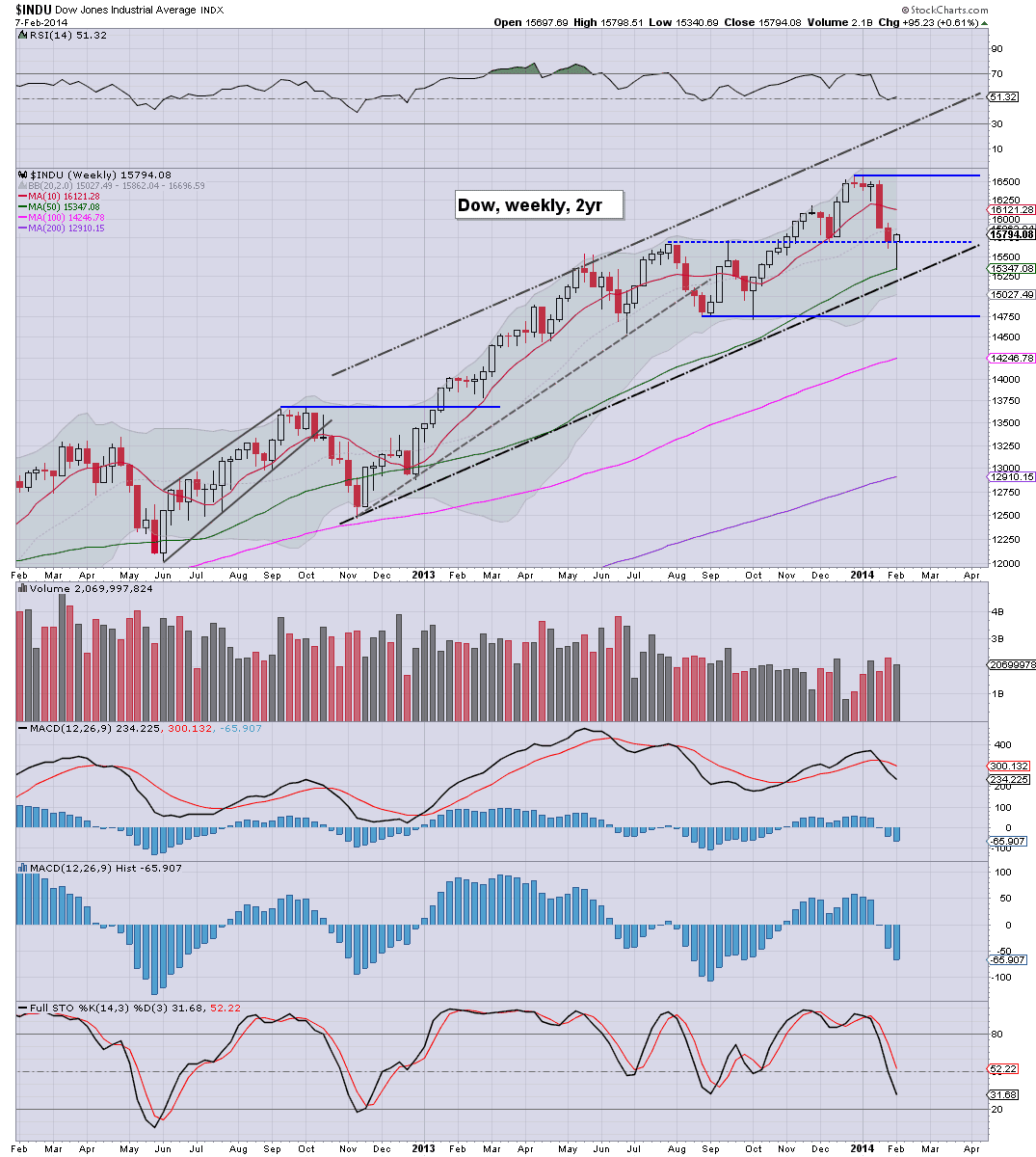 *I should note that the two market leaders - Trans/R2K, both closed with net weekly declines, but the Trans' did flip from a red to a blue candle on the weekly 'rainbow' charts... 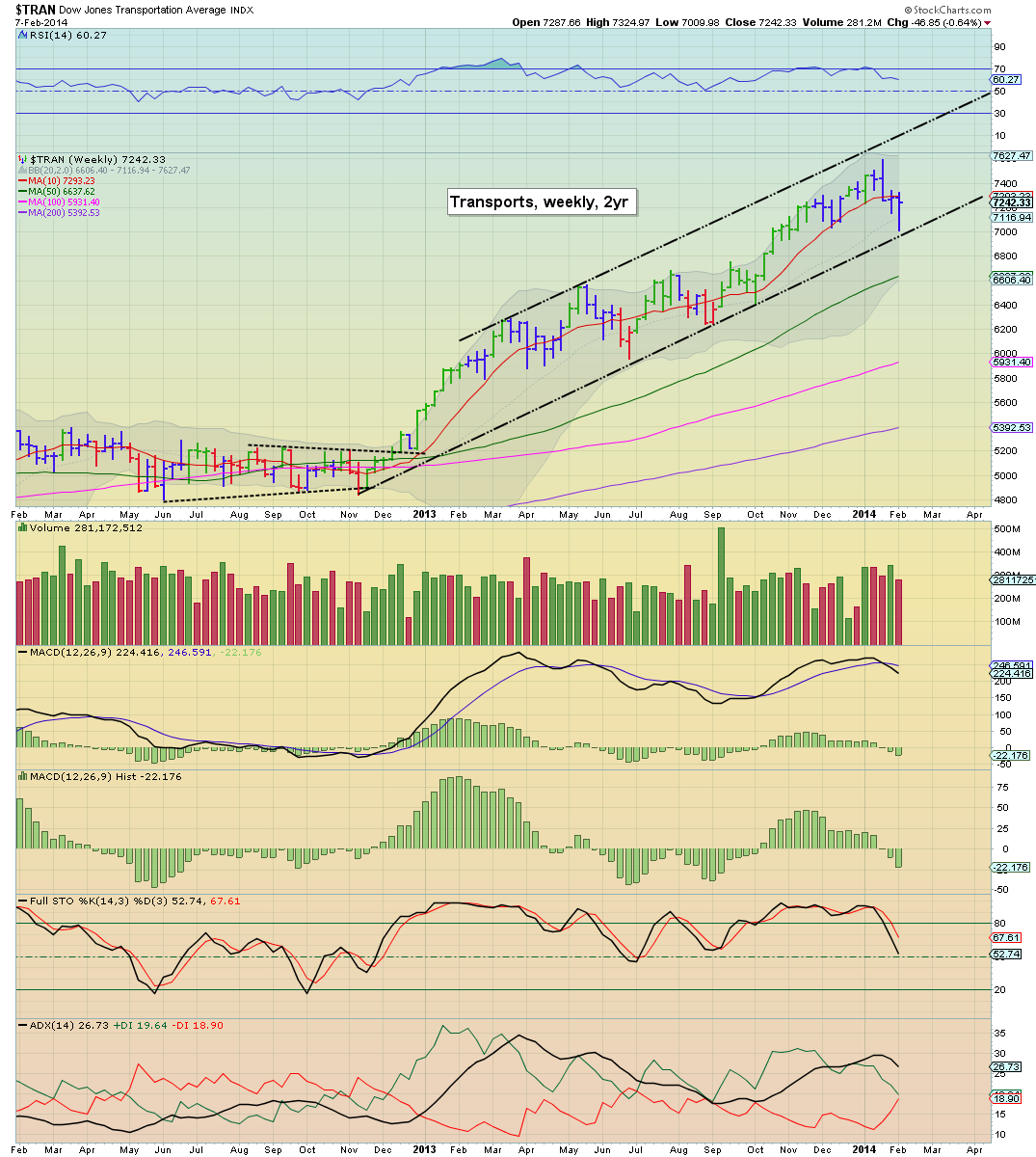 --
For many out there, it has been a real long and tough week. The bull maniacs did get a real scare on Monday, not least with the VIX breaking into the 20s - the first time since last October.

Even more bearish was the break of the weekly trend - from Nov'2012, on the R2K, but this was not backed up by the Transports, or any of the other major indexes.

Equities pushed higher into the weekend, sp +23pts @ 1797. The two leaders - Trans/R2K, settled higher by 0.8% and 1.2% respectively. With the VIX closing in a dire manner, it would seem we have a near term floor of 1737, with further upside next week. 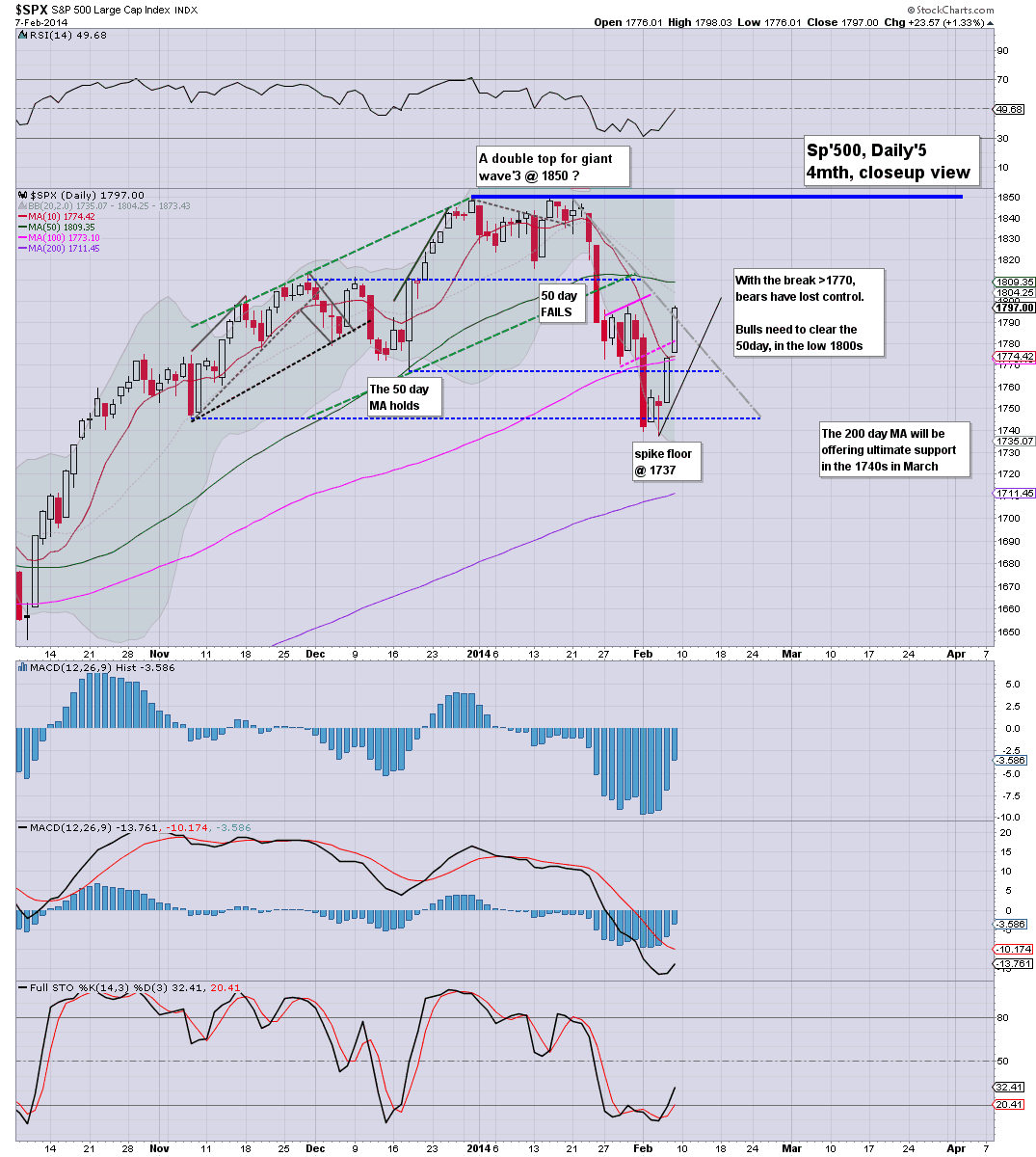 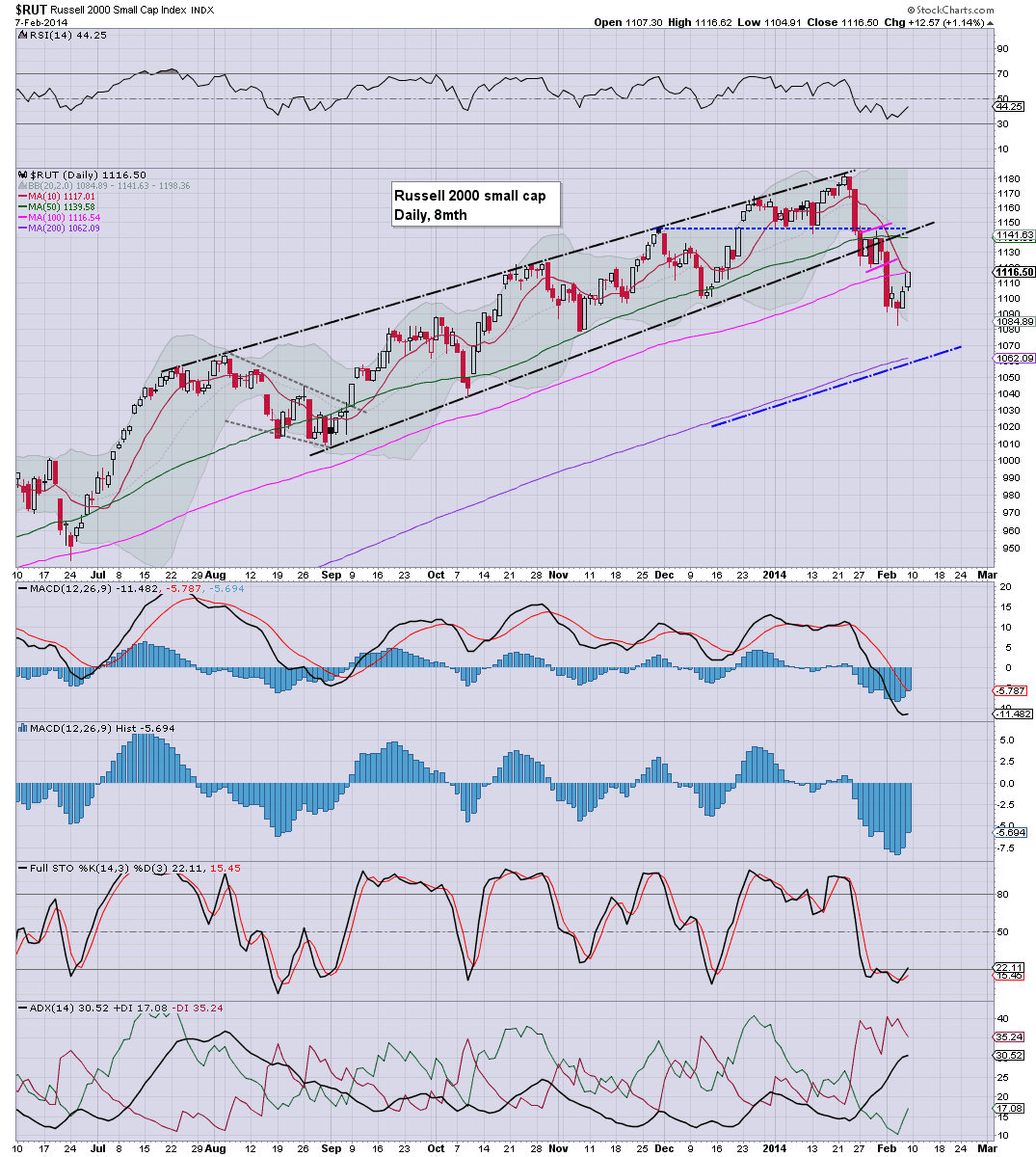 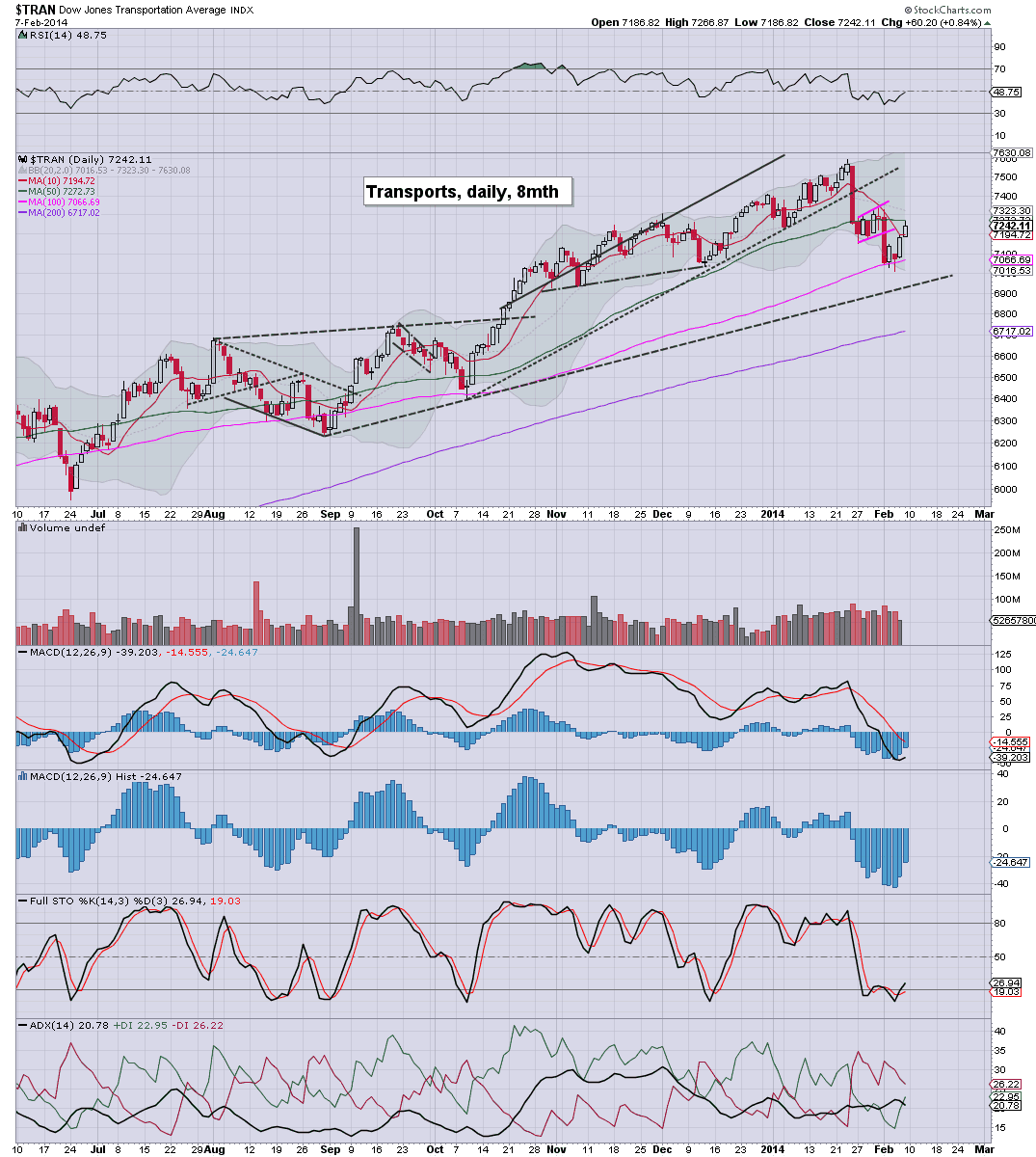 That sure was a very bullish second half of the week. Indeed, the week can be split into almost two diverse halves. With some mild panic - an sp -40pt fall on Monday, a lower low of 1737 on Wednesday, but then climbing all the way into the Friday close, it was one hell of a split week.

Barring another bizarre turn to the downside, back below 1770 - if not 1750, equity bears look toast until late March/April.
--