The many finance sites, blogs and message boards are indeed buzzing with a lot of ideas about the week ahead. Will it be the first significant victory for the bears since last November? Or was last Fridays fall just another cruel tease? With the futures wheel not even open yet....I have a theory....

A beautiful fractal. Is that what we have? Lets first keep in mind these 3 perspectives: 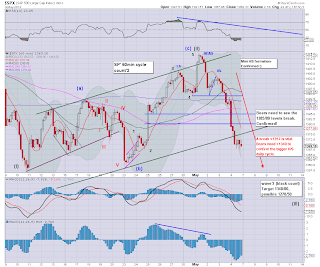 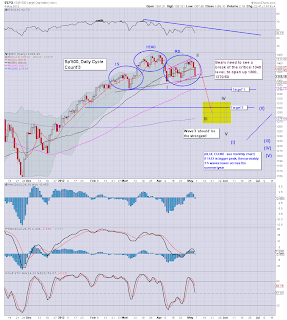 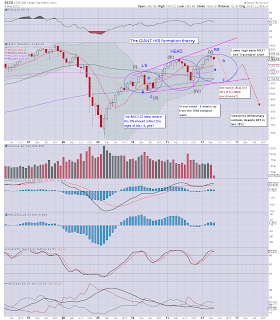 So..we have the baby H/S on the hourly cycle, that formed part of the RS - as seen on the daily cycle. From a very broad monthly chart perspective, you can see what is possibly a giant H/S - which covers the entire 'rally of delusion' since the March 2009 lows. Is that what we have here?


'Oversold' can last a rather long time sometimes

With much web chatter of big market moves to the downside, I wanted to also post a few notes on something that I think will be very important for the coming weeks. Generally speaking, the market never stays oversold on the hourly charts for more than a few hours - which is always a problem for anyone holding short across multiple days. However, there are rare periods when the market does fall, and keeps falling. Lets look at two classic recent instances: 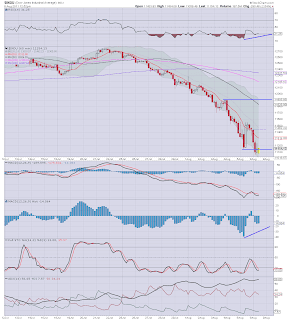 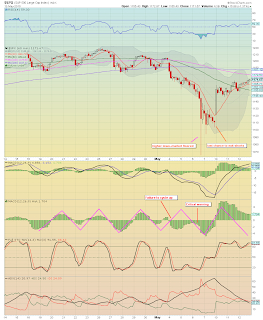 The most important point that I always gain from seeing such hourly charts is the great respect given to the 10MA, when the market is in a consistent down cycle. I don't know why the 10MA seems to be the usual resistance/wall, but in my observations of this crazy market, that's what I continue to see. Just last Wednesday the market rallied from 1394, and later failed at the10MA of sp'1403.

Now, there can be brief moments when the 10MA is broken above - and indeed that often merits being stopped out. However, the two charts above are good examples in that a slightly looser stop 1% (3/5% leveraged ETFs), would be enough to stay in a position.

As for the flash-crash chart, look at the RSI and MACD (green bar histogram) cycle, both were oversold for around 4 solid days.

*ohh, and happy flash-crash anniversary! It has been two bizarre and twisted market years since that turbulent week. It remains laughable of course that the mainstream still wish to attribute a 'fat finger', or blame Waddle/Reed for the 500pt fall across just a few minutes.
-- 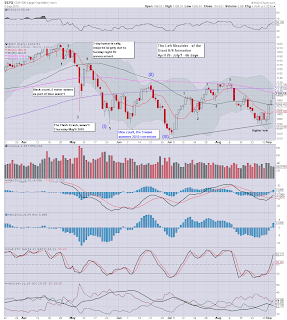 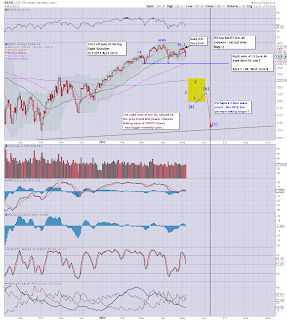 I struggled with creating this chart, the drop seems way too severe - although the same thing happened not only last July, but also in May 2010. So, its not like we haven't had some good instances of this action before.

The important aspect of the April-July 2010 cycle was it seemed to be some sort of ABC/123 wave. Logically, would not the RS act kind of like the LS ? Its just an idea...and the above chart runs with it.

Assuming sp'1422 was the peak, add 66 days, and that gives us a target floor date of Wed' June'6. Now, I'm certainly not going to get obsessive about precise dates. Frankly, if 'sp'1150 was hit by late July, I'd still consider that a very successful outcome.

So, I'll be keeping early/mid June in mind as a possible floor. However, were we to get close to such a level this summer, other even bigger issues then start to come into play. A break of the lower channel/wedge line would be a critical warning that the giant H/S theory is not only confirmed, but completed, that and we're going to either keep falling or...snap hard higher. If we see the market under sp'1100 this summer, some of the older major market doom projections then will need to be re-considered.

We don't have any major econ-data this week, so the market will most likely be focused on the aftermath of the EU elections this weekend. Will the $ have a strong week, with the € breaking below 1.30 ? As I noted last week, both the daily and weekly cycles for the Euro are primed to cycle lower for at least a week or so. If that is the case, it will add extra downward pressure to both the equity and commodity markets.

The Bernanke does a talk this Thursday, and that's always something for the bears to beware of. I'm not sure if its significant enough event for the clown channel networks to wish to cover, but they sure might want to hear some 'hints of QE' if the sp' is down to 1340/00.

With the 'super moon' now out of the way, how will the market open Monday morning? The consensus view I have observed is that Monday is set to open at least somewhat lower, and then a bounce - most likely around 1355/57. A stronger opening gap lower of -20, and the bounce would even more likely occur around 1340. A bounce would probably last at least 2-4 hours, and add around 10/15 pts on the SP. - with a subsequent fail at the 10MA. That is something to keep in mind I believe.

Good wishes for the trading week ahead!
Posted by Trading Sunset at 22:30:00
Email ThisBlogThis!Share to TwitterShare to FacebookShare to Pinterest
Newer Posts Older Posts Home
Subscribe to: Posts (Atom)