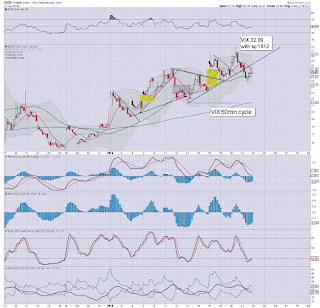 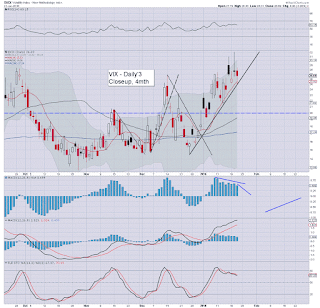 Suffice to add, if sp'1812 is a short term floor, then VIX is going to melt lower into February.

VIX will likely lose the key 20 threshold (if briefly) before the next surge. 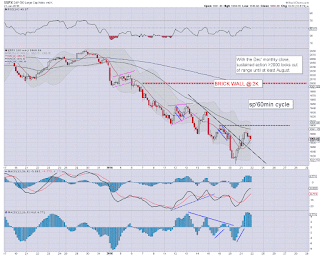 Little to add, from what I've babbling about across today.

It does seem we have a short term floor, but clearly, price action remains very twitchy.

3pm update - a little cooling, but neither imploding

US equities have cooled from an intra high of sp'1889 to 1859 (1.5% swing), but now rebounding from the hourly 10MA. Price action remains shaky, but with each passing hour, the 1812 low is solidifying as a short term low. Oil is holding sig' gains of around 3%. 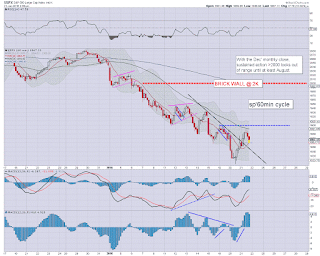 Despite the ongoing shaky price action... we are 50/60pts above yesterday's low.. and it doesn't seem like we'll be trading that low for at least a few weeks. 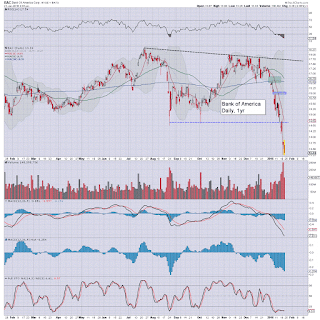 There will clearly not be another rate hike next Wednesday, nor at the following FOMC of March'16th.

If I am correct about broader downside to the sp'1600s, that rules out another hike until at least Q4... and even then, would the Fed dare?

The market is similarly minded, as the bank stocks are still struggling.
-- 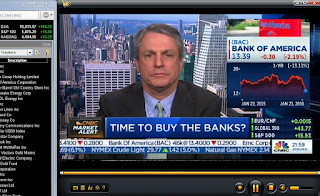 Barring the apocalypse, I'll return at the close.
Posted by Trading Sunset at 19:53:00
Email ThisBlogThis!Share to TwitterShare to FacebookShare to Pinterest

Most US equity indexes remain holding borderline significant gains, as the equity/energy bears look exhausted. Indeed, despite a net build of 4 million barrels, Oil is +3.8%, around the key $30 threshold. Current price action is suggestive a bounce is underway, that will take us into early February. 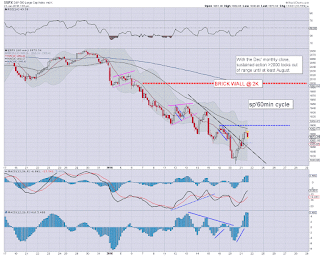 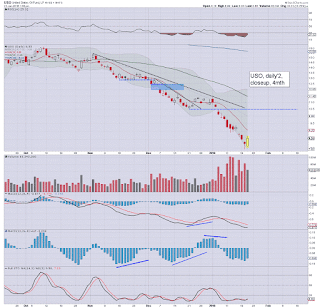 It does seem we have a short term floor of sp'1812... and have already climbed almost 4%. Clearly, the markets attention will now swing toward the FOMC next Wednesday.. and the Q4 GDP data... the latter of which won't likely please the macro-bulls.
- 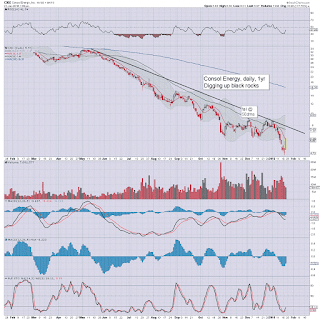 Arguably representative of many energy related stocks... a hyper gain of almost 20%, but then.. this stock is net lower by around -80% since last summer.There is nothing bullish about the bigger picture, as the US 'war on coal' continues.
--

Broadly though, that is still 50pts above yesterdays low... and I expect that to hold.

Arguably, bears getting another chance to close out... and/or go long.
Posted by Trading Sunset at 18:55:00
Email ThisBlogThis!Share to TwitterShare to FacebookShare to Pinterest

With the sp'500 pushing to 1889 - along with VIX 25.01, there is a clear provisional break, as seen on the daily charts. Equity/energy bears look exhausted, with a viable bounce to 1940/70s into early February. Any bounce does nothing to the mid term outlook though, the 1600s remain on track. 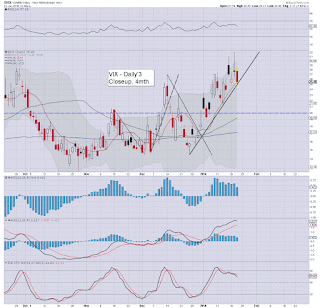 Anyone resolutely holding short has an increasing problem.

Sure, we could trade lower tomorrow/early next week (but holding >1812) - ahead of the Yellen/FOMC, but broadly... it looks like we have a short term floor.

Oil is certainly helping, having swung from -2% to +4%... despite another inventory build.

*watching a few analysts on clown finance TV discuss Oil, it remains a little bizarre how they are talking about a core floor... whilst the over-supply issue has still not be remotely resolved.

There is yet to be industry capitulation in the oil/gas AND mining sector.
--

US equities remain moderately higher, having hit an intra high of sp'1881, along with VIX cooling to 25.94. Despite a net build of 4 million barrels, Oil has swung from early declines of -2% to +3%. Equity/energy bears are looking very exhausted. 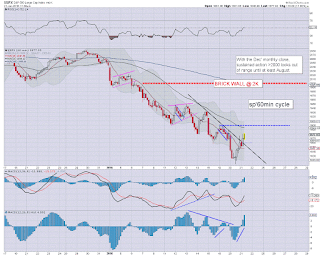 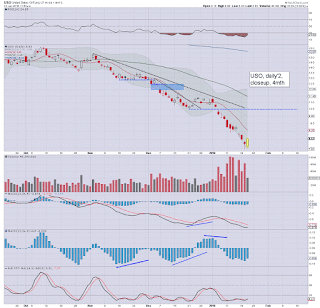 Suffice to add... a short term floor for equities and oil seems probable.

If the market can rally to sp'1970 or so.. that will merely make for a straight forward re-short in February.
-


-
time for tea
Posted by Trading Sunset at 16:51:00
Email ThisBlogThis!Share to TwitterShare to FacebookShare to Pinterest

11am update - leaning toward the bulls 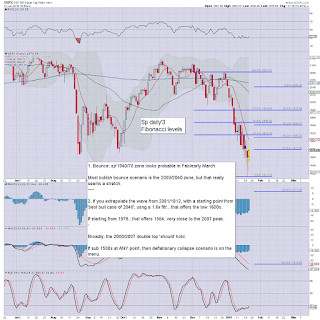 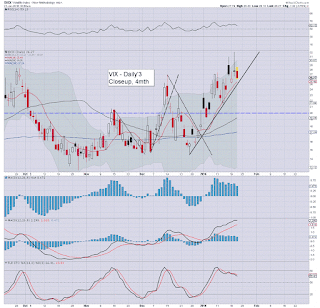 **a second spiky floor daily candle.. offering another sign that the bears are exhausted.
--

Another damn chilly day in the metropolis, but another day closer to summer :)

Oil is seeing minor chop.... one of those days where still a lousy number, but vulnerable to upside as the energy/oil bears need to close out.

For those resolutely holding short...its starting to look kinda ugly.
Posted by Trading Sunset at 15:51:00
Email ThisBlogThis!Share to TwitterShare to FacebookShare to Pinterest

As has been the case many times in the past few weeks, US equities open higher... but the gains are clearly shaky, with indexes quickly turning negative. On the bullish side, a powerful spike floor from sp'1812. On the bearish side, 1812 makes little sense as a key low, with weekly/monthly cycles suggestive of 1730 before end month. 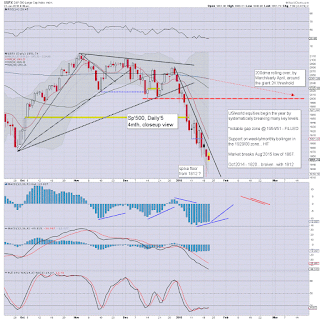 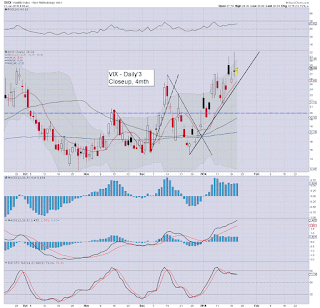 Draghi has done his best to 'inspire' the EU/world capital markets.

Clearly, the gains still aren't sustaining, but neither is the market imploding.

The bigger mid term looks clear though, with the sp'1600/1500s by late spring/early summer. Ironically, the real issue is how will the central banks respond to that kind of equity drop?
-

--
time for some sun... or I'll get even more twitchy than this market. 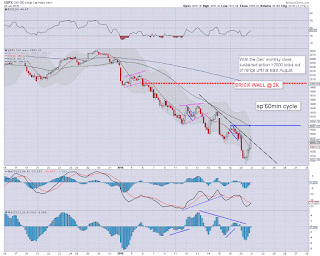 --
Update from an increasingly loud Oscar

8.13am... ECB keep rates unchanged (keep in mind, they are already negative).

Now its a case of word games from Draghi. Will he threaten increased QE... and would the market buy such threats?
--

*keep in mind, we've the EIA oil report at 10.30am. It could be one of those days when despite a bad inventory number, the Oil market still rallies.
-

So.. Draghi is giving the market a major kick higher.... now its about how the market inteprets the Oil report at 10.30am.
-

Still... 1812 is a long way down...... time is, or has already run out for the bears.
Posted by Trading Sunset at 13:04:00
Email ThisBlogThis!Share to TwitterShare to FacebookShare to Pinterest

It was another day for the equity bears, with a new multi-year low of sp'1812, along with VIX climbing to the 32s. However, the hyper ramp into the closing hour to 1876 was a powerfully bullish swing, and with VIX cooling from an intra high of 32.09 to 26.59, we may have a rather bland capitulation floor. 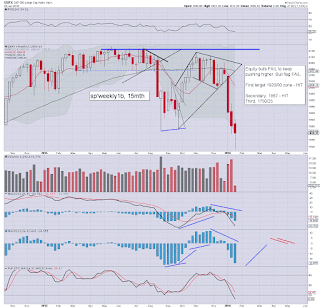 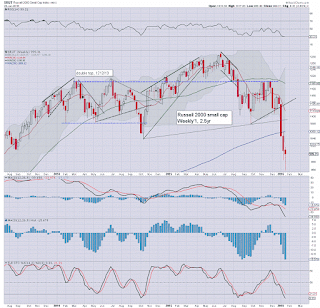 So, new multi-year lows for most indexes, but the ramp from the morning low of sp'1812 and R2K 958 was powerfully bullish.

The daily close could have been a little stronger, but anyone holding short overnight now faces the threat of Draghi inspiring the EU market tomorrow.. before the US open.

Any break back above sp'1900 would be decisive, and then it would be a case of how high the market can rally across February/March.

Thursday will see an ECB meeting, with Draghi set to appear around 8.30am EST.

Here is something that crossed my mind earlier... 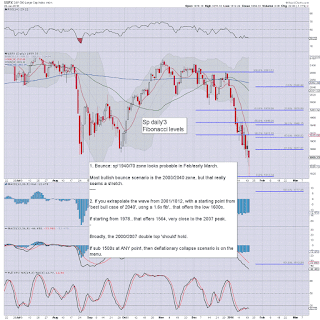 The chart should explain itself. Anyone out there with some related ideas/thoughts?

A multi-week bounce is obviously inevitable, but with broader weakness into the late spring/early summer. The ultimate issue remains whether the the sp'500 can hold the 2000/2007 double top of 1553/1576? For now, I'm holding to the original outlook that I posted Jan'3rd.
--

As ever, I sure don't agree with everything Schiff says, but I usually think he is worth listening to.

A frustrating year so far

Frankly, its been a damn frustrating start to the year. Equity bears were teased across 2015... and I think many are simply battle scarred.

A bounce seemed due last week.. but never came. Today, the Oct'2014 low of sp'1820 was decisively broken, followed by a natural rally into the 2pm hour. I launched a VIX-long (via TVIX) position, there was some market chop, but then the market hyper-ramped (especially the Trans/R2K)... with VIX imploding from the 29s to 26s.

I have a very low tolerance lately, and I was more than content to make a run for the exit door, as there now appears serious threat we've made a short term low.

I suppose it could be worse. I could have been long from sp'2081.. or using margin to be long energy stocks/Oil. No doubt some retail amateurs will have been zeroed out since the start of this year.

I guess you could say... another battle has ended, but the broader war continues. 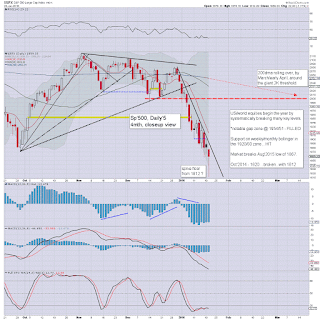 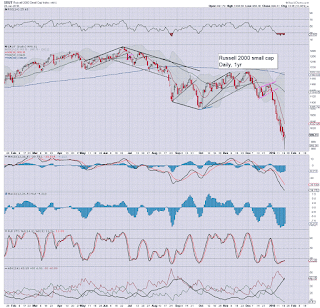 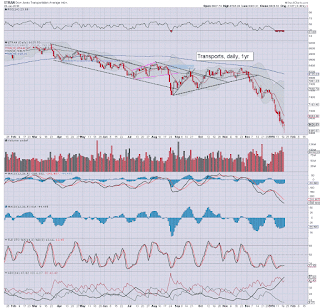