The VIX jumped moderately higher at the open, back in the low 14s, but with the indexes rallying across the day, the VIX lost over half the gains, and closed just 3% higher @ 13.15. Hourly charts offer upside early Thursday, but daily VIX charts suggest downside. 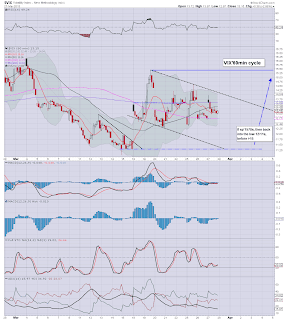 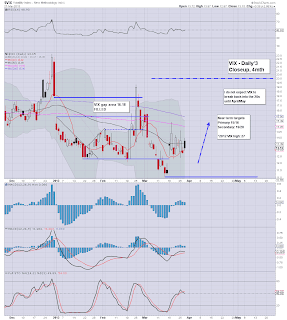 There are indeed a few conflicting signals between the daily and hourly cycles.

Certainly, the more important daily chart is sporting a very clear black/fail candle, and that is highly suggestive of at least 'some' VIX downside Thursday and perhaps into next week.

Regardless, seems no point in picking up any VIX call blocks ahead of the long weekend, and besides, the indexes could easily yet battle higher into the sp'1570s, which might equate to VIX 11s.
--

more later on the Indexes
Posted by Trading Sunset at 22:00:00
Email ThisBlogThis!Share to TwitterShare to FacebookShare to Pinterest

The market opened lower, but the bears are still lacking any persistent downside power. With the daily charts suggesting short term momentum to the upside, bears face more pain tomorrow. USD held gains into the close, along with Oil and Gold all higher. 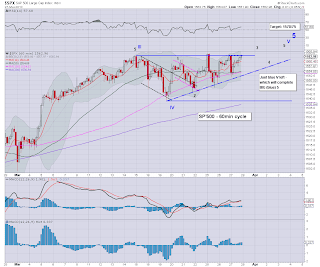 *special note on the hourly count...

The hourly count is something I am now VERY uncertain of. The current sideways chop is something I'm really not sure what to make of. I've not highlighted, but Transports is still significant below the recent high of March'15, and could even be a sloped H/S formation.

What I can say though, is that the daily charts are warning of 2-3 days of upside, which gets us into next week. Bears also need to keep in mind there is a rather large POMO to conclude the week..and month.

the usual bits and pieces across the evening.
Posted by Trading Sunset at 20:01:00
Email ThisBlogThis!Share to TwitterShare to FacebookShare to Pinterest

3pm update - closing in the green

It would seem Mr Market is indeed going to close marginally higher. Those opening declines now seem a long way down, and the bears have major problems ahead of the 3 day weekend. Oil has picked up some gains, Gold is higher, Silver fully reversed, now a touch higher. 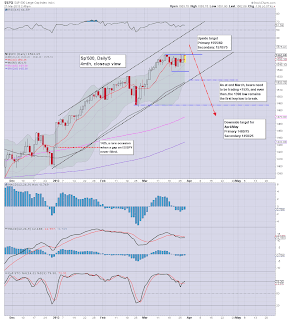 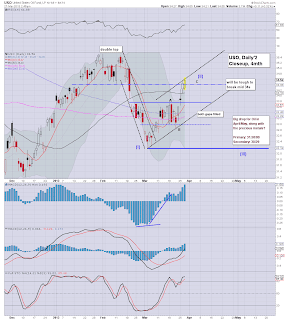 Interesting day, and I'm glad I'm still managing to restrain myself from shorting the indexes.

I'm somewhat surprised at the strength in Oil, its now above my best bullish outlook of 34.40s. It can get stuck for 2-3 days next week, it might become a good short across April/May

--
RE: silver,. I'm still holding one block of SLV (long), and remain seeking an exit in the 28.25/50 zone, perhaps a gap higher tomorrow morning. Hmm

back after the close
Posted by Trading Sunset at 18:49:00
Email ThisBlogThis!Share to TwitterShare to FacebookShare to Pinterest

Mr Market is still battling to go green, and I'm guessing it will manage it. USD is still holding opening gains. Oil looks stuck at key resistance. Gold is creeping higher, and Silver continues to recover after a sharp gap lower..now fractionally higher. 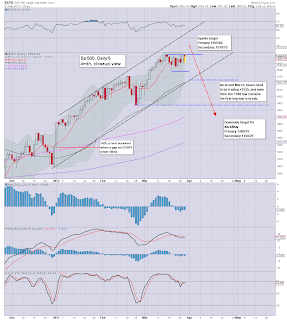 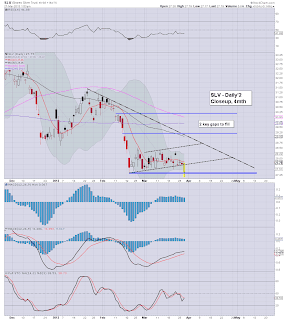 Not much to add, aside that I'm pleased I was 'bold' (or is that reckless) enough to pick up a second SLV block at the open..which I just exited for 35% gains... :)

That is yet more $ to short these stupidly over-priced indexes.. for some time next week.

The good bears need to remain patient..and wait to meddle in indexes/VIX..after the Easter break.

back at 3pm
Posted by Trading Sunset at 17:56:00
Email ThisBlogThis!Share to TwitterShare to FacebookShare to Pinterest

Market is now only 0.2% lower, and looks set to close marginally green. VIX is still a touch higher, but will surely close red. Oil is lower, and resting around key resistance. Gold is moderately higher, whilst Silver is trying to rally, after a sharp opening gap lower. 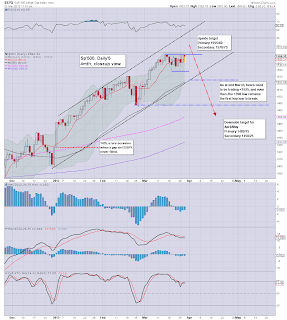 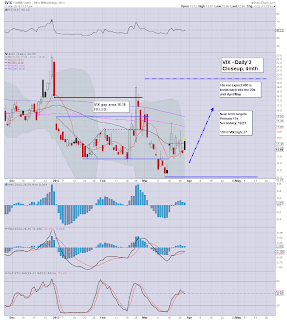 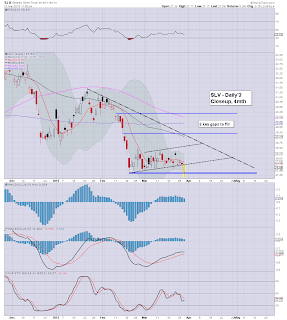 There is no reason to be short ahead of the Easter weekend, is there?
--

Silver is somewhat stable above the opening lows, but metal bulls will want to see the 27.90s late today/early tomorrow.  Weekly charts continue to warn of upside, at least a challenge of the declining resistance, which is in the low 29s.
-

back at 2pm
Posted by Trading Sunset at 15:55:00
Email ThisBlogThis!Share to TwitterShare to FacebookShare to Pinterest

11am update - here comes the recovery

Initial market declines are failing to hold, and bears are somewhat 'on the run' again. We could easily close green, and the sp'1570s remain viable at any point. USD is holding opening gains of 0.4%. Oil is moderately lower, Gold is higher, and Silver has seen a strong opening reversal. 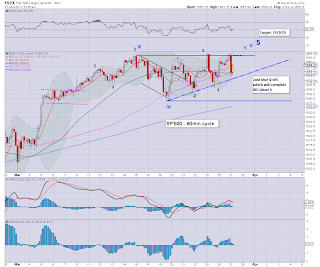 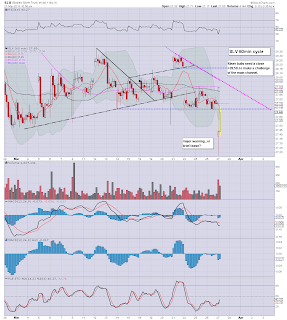 So..market is trying to battle back upward..as I feared. VIX is also a tell, black opening candle on the hourly charts, thats never a good thing to see in bear land.

No point shorting the market here..ahead of a long weekend.
--

*Silver seeing some strong moves after what had been a quiet three days.
Posted by Trading Sunset at 14:51:00
Email ThisBlogThis!Share to TwitterShare to FacebookShare to Pinterest

10am update - another tease?

The market opens with moderate declines of 0.6%, but why would they build or hold into the close? USD is again higher, Oil is lower, Gold is flat, but Silver opens down 1.4%. VIX is 7% higher, but its already sporting a black/fail candle in the opening 30mins. 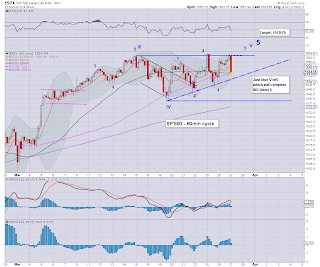 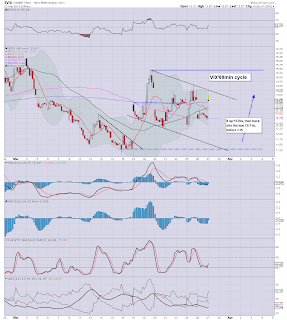 I certainly won't be trying to chase this market lower, this side of the Easter break.
--

The key problem the bears face is underlying momentum is shifting back to the upside, at least for a few days. 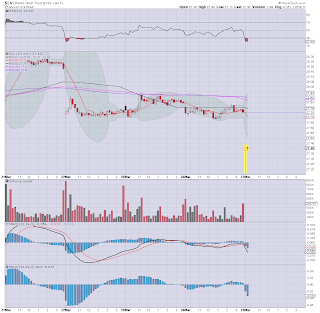 Possible reversal underway in Silver, will need to see the low 28s to be confirmed.
Posted by Trading Sunset at 13:50:00
Email ThisBlogThis!Share to TwitterShare to FacebookShare to Pinterest

Mixed Signals from Copper and Oil

Whilst the main equity market continues to rally, there are some very mixed signals in commodity land. The hugely important industrial metal of Copper is still looking very weak, yet WTIC Oil is battling higher, and closed especially strong today. 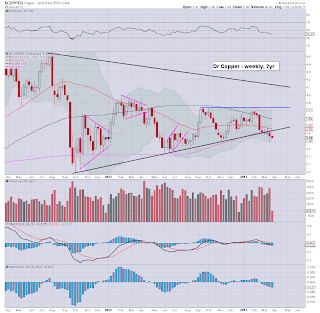 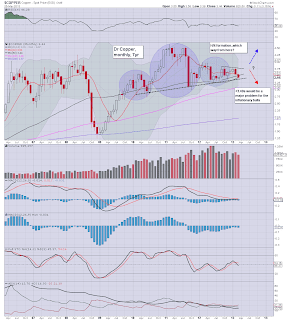 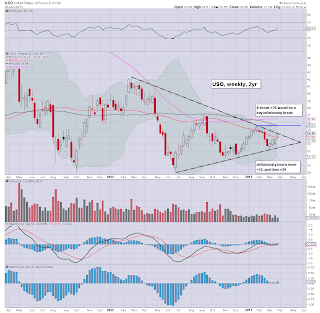 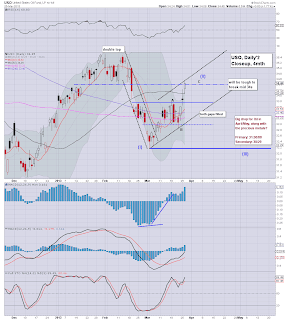 I'm not sure what to make of the current action. I suppose both should be treated as independent things, but if the economy is slowing/weak, you'd have to expect to see at least some equivalent weakness in the Oil market.

WTIC Oil is back in the $96s, and across the next few days we're going to see the market start to wonder if the big $100 is possible in the next week or two.  I just don't think that's viable though.

As for Copper, it does indeed look really weak. Underlying MACD (blue bar histogram) on the weekly cycle is still ticking lower, and there is a clear breach of key support - on what was a giant triangle. No sign of a turn/levelling phase for Copper.

There isn't too much data tomorrow, aside from the usual EIA oil report, and some home data. Thursday will be far more important, with GDP/PMI data.

I have to believe the bulls are going to hold the market together into the long 3 day weekend. A test of the sp'1576 high looks viable as early as tomorrow, but maybe they'll take until early next week to do it.

Regardless, I won't be shorting any indexes - or picking up VIX call blocks, until next week at least.

The main indexes closed higher, with the sp' settling at the recent high of 1563. Near term looks moderately bullish, and the sp'1570s look viable, with a brief spike to challenge the Oct'2007 intra-day high of 1576. A moderate decline of 5-7% is expected across April/May 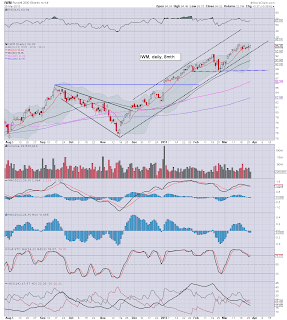 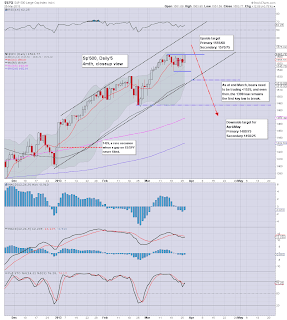 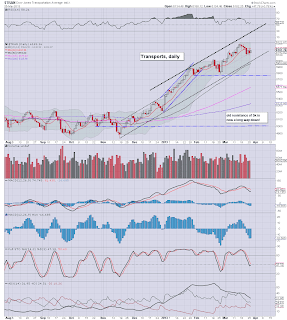 The daily charts should really concern the bears who were getting moderately excited just yesterday morning.

The underlying MACD (blue bar histogram) cycle is complete - on the downside, and we're now starting to tick higher again.

On any basis, I'd have to guess we tick upward for the next 2-4 days...minimum..and that gets the bulls to next Tues/Wednesday.

It would seem the market will test the Oct'2007 high of sp'1576, where we could see a VERY sharp intra-day reversal. On the flip side, I suppose we could still break into the 1580s, but who is going to be buying at those levels? Right now, I'm guessing we'll see the reversal scenario.

For the patient bears...next week looks to be somewhat promising as a key cyclical top.