After some moderate weakness, US equity indexes powerfully rebounded. Net weekly gains ranged from 3.2% (Nasdaq Comp'), 2.7% (sp'500), to 2.1% (Dow). Near term outlook offers further upside into the sp'2125/50 zone by late April. The next threat to the market is the June FOMC.. when interest rates might finally be raised. 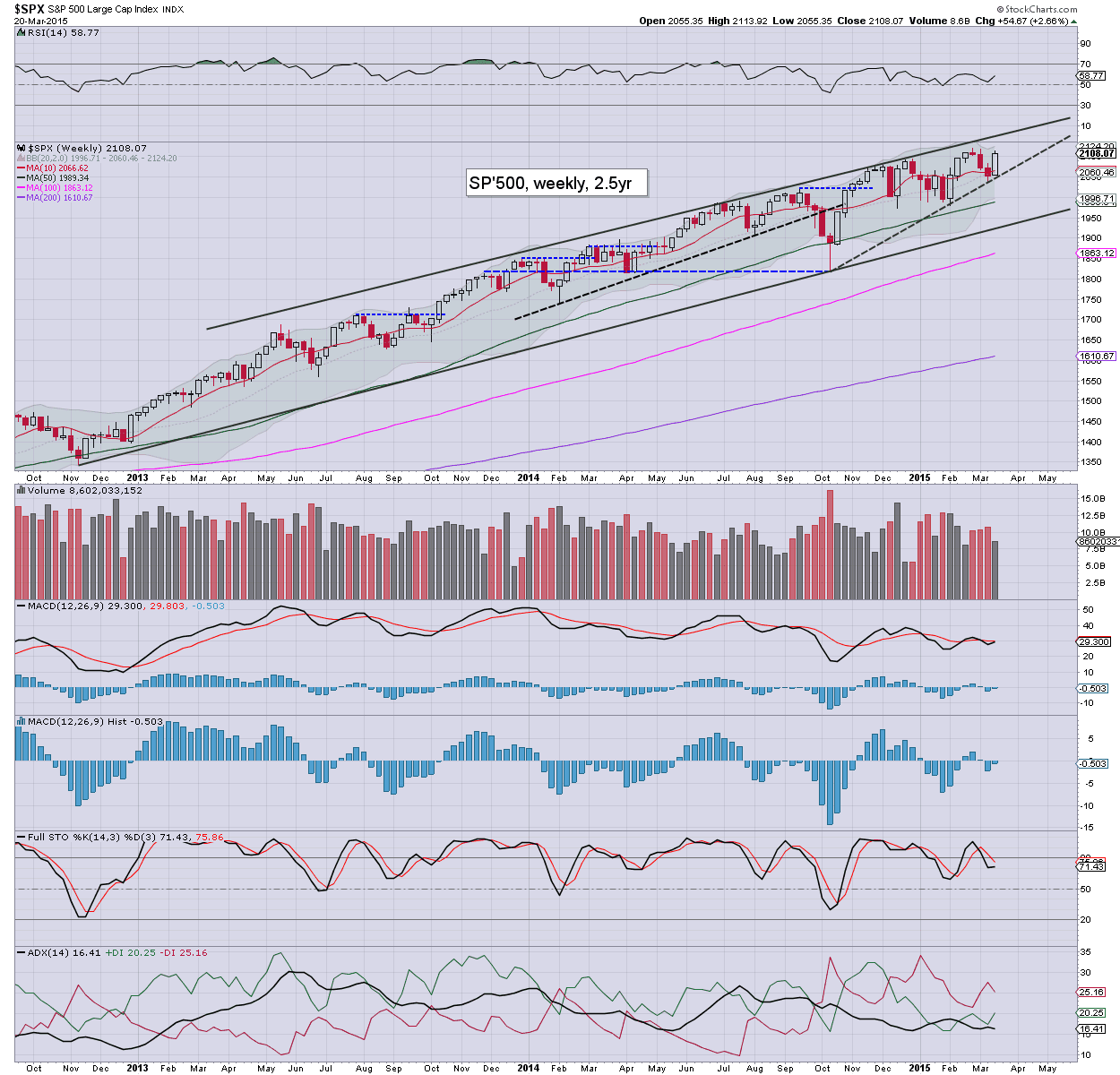 A rather significant net weekly gain of 54pts (2.6%)... settling the week at 2108 - a mere 0.5% from breaking the 2119 historic high. Underlying MACD (blue bar histogram) cycle is set to turn positive at the Monday open, and there is a viable 'best bullish case' upside of 3-5 weeks.. which will take us into early May.

There is clear trend/channel resistance in the 2120/30s in the immediate term, but that of course is rising each and every week. By early May, the sp'500 could easily be in the 2150/75 zone.

There is first support at the Wednesday low of 2061 - where the 50dma was lurking.. it looks unlikely that we'll be trading under there until at least May.. if not June. 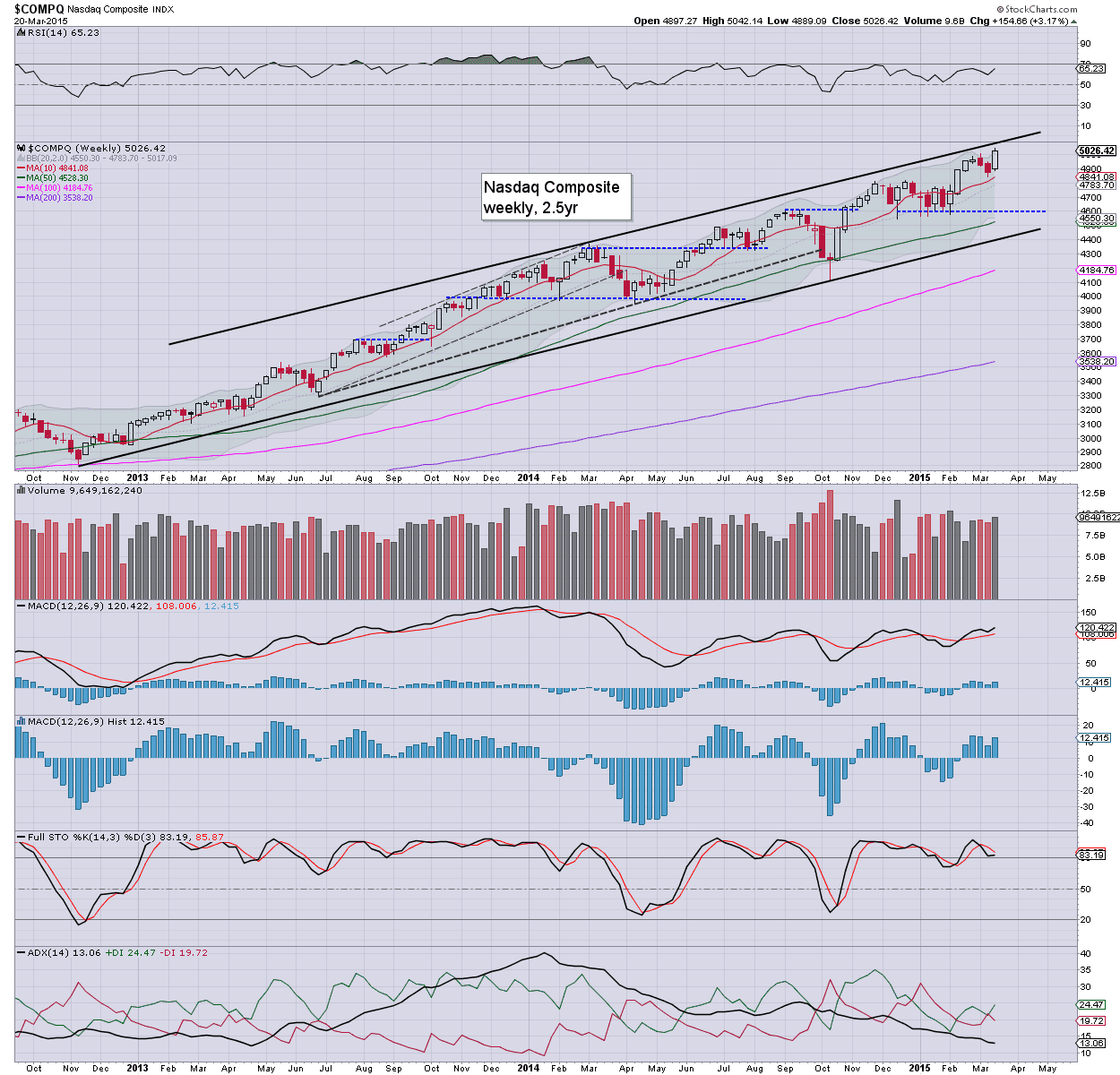 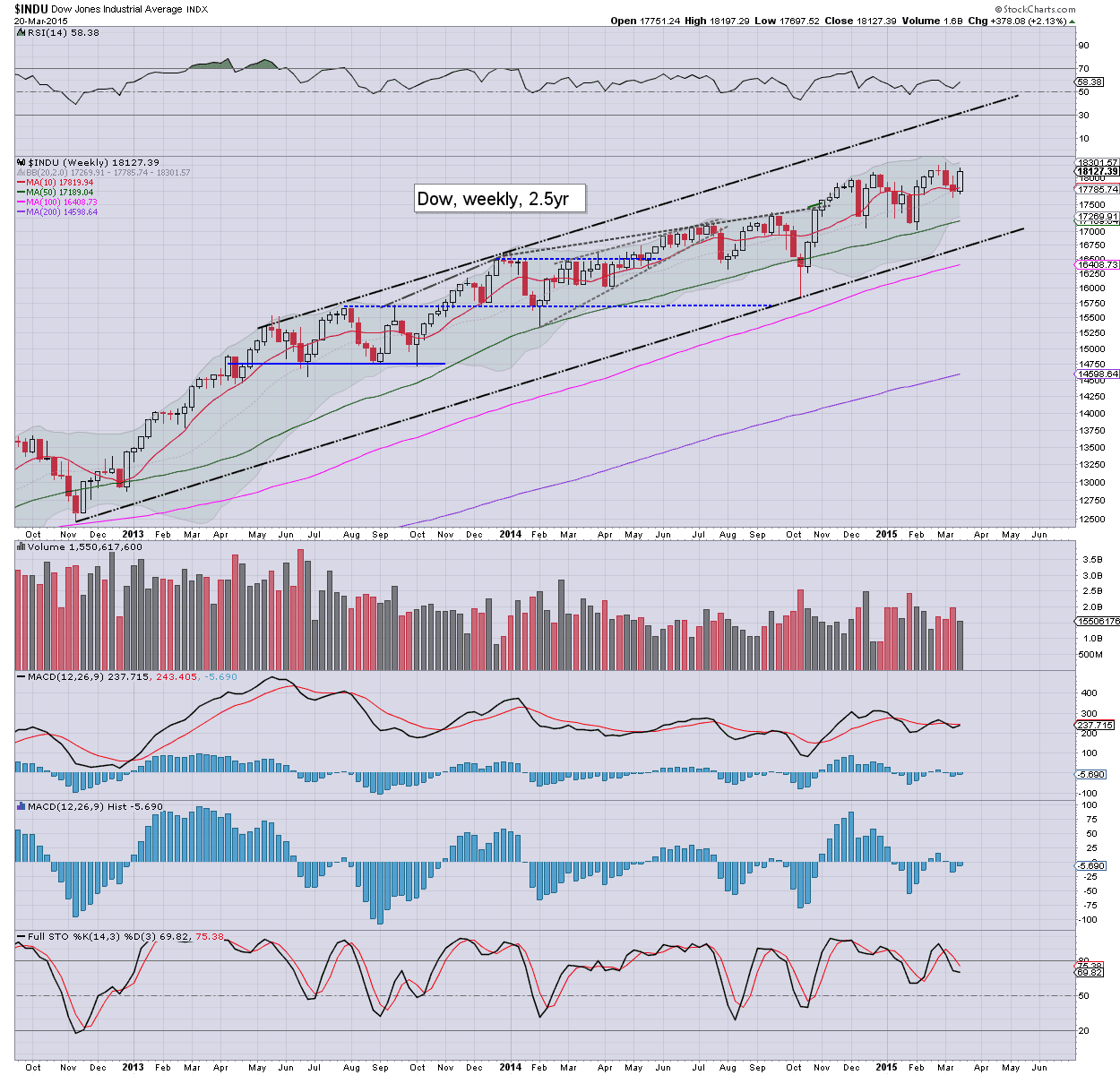 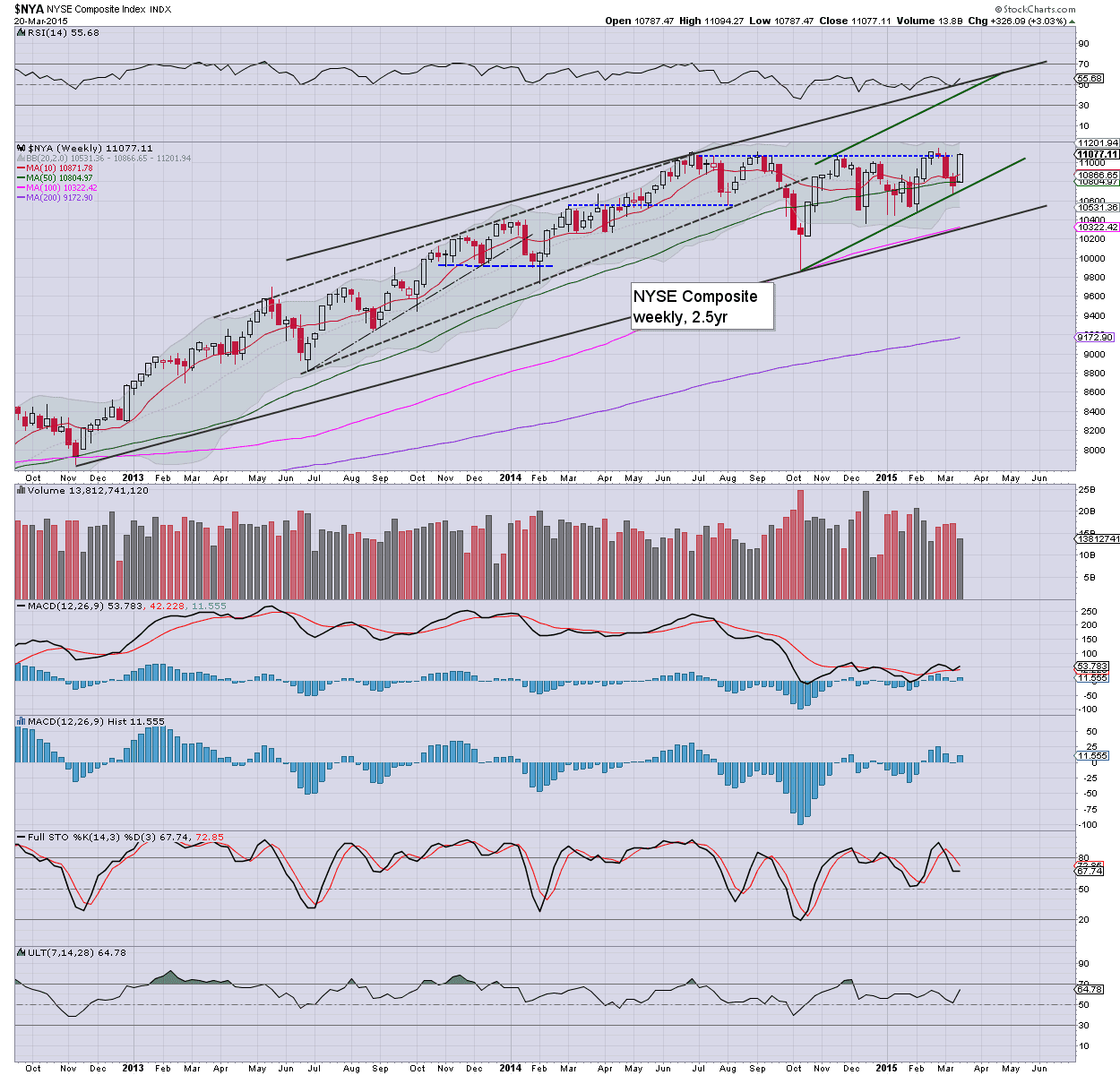 The master index gained an impressive 3.0%, with a weekly close of 11070. There looks to be near term upside to the 11200/300s in April/may. 12K looks difficult before late summer, not least as there is typical seasonal weakness across May-June. 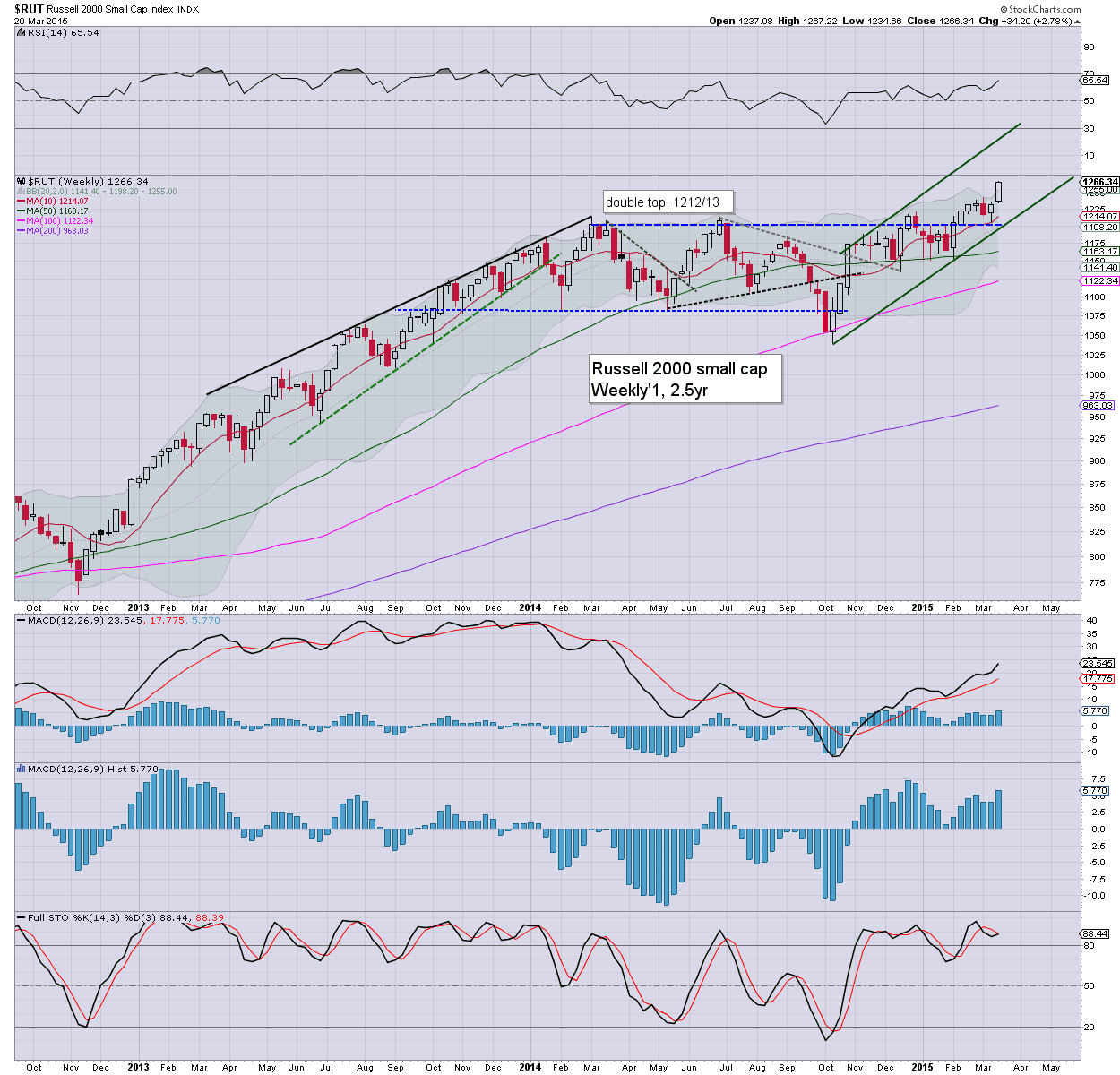 The second market leader is pushing hard to the upside, with a net weekly gain of 2.8%, with a new historic high of 1267. It is notable that the R2K is now trading above the upper weekly bol'. The 1300s look a viable target by early May. There are multiple aspects of support in the 1200/1150 zone. Under no outlook does a break under 1k look viable this year. 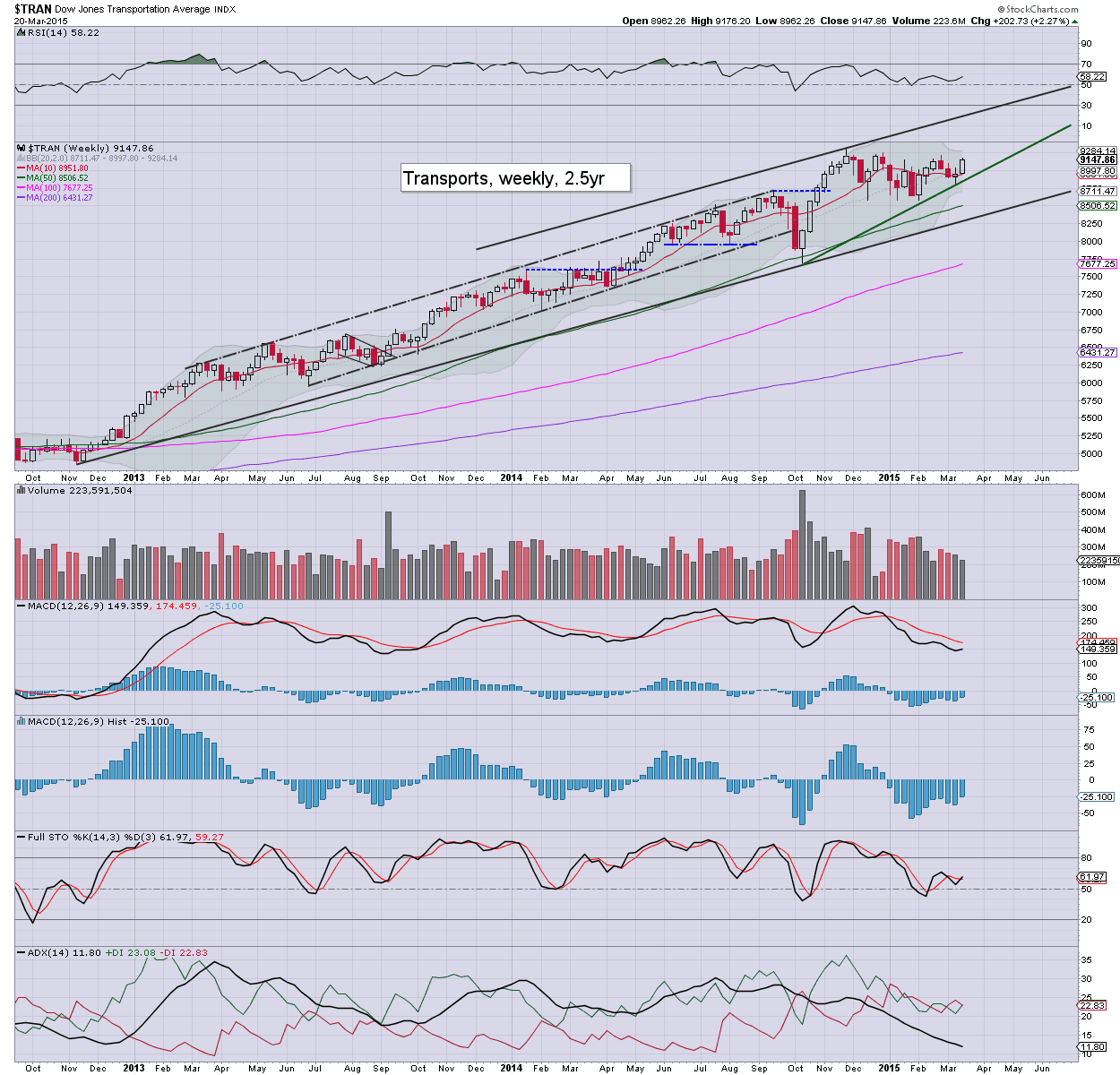 The 'old leader' saw a net weekly gain of 2.3% in the 9100s. The giant 10k threshold remains the next big target, although that looks out of range until at least June. Low Oil prices continue to help the Transport stocks. However, if the USD has put in a mid term top @ the big DXY 100 threshold, then the tranny will likely lag the  broader market.. if Oil can push back above the $50 level.

So... some pre-FOMC declines to sp'2055, but then a relative hyper-ramp all the way to a Friday peak of 2113. With Yellen managing to placate the US capital markets, we're back to the primary upward trend.

The bulls have nothing to prove. The onus remains on the bears to break and hold under some of the recent lows. Right now... first support is the rising 50dma (sp'2064)... then the 2K threshold... and the Oct' spike low of 1820. Does anyone seriously think we'll be sustainably trading <2K any time soon?

All things considered, it looks like Mr Market has a fair chance of broad upside all the way into the June 17'th FOMC.. at which point int' rates might finally be raised. If so.. then it would be the perfect excuse for a market correction.. after the current multi-week up wave.

There really isn't much of importance due next week... which considering this weeks gains, will likely favour the equity bulls

--
Back at the Monday open.
Posted by Trading Sunset at 16:00:00
Email ThisBlogThis!Share to TwitterShare to FacebookShare to Pinterest

The hugely powerful rally from May 2014 - DXY 78.93, to the recent high of 100.71, appears to have concluded. A very natural retrace to the multi-year breakout - in the 90/87 zone looks increasingly probable across the spring/summer. 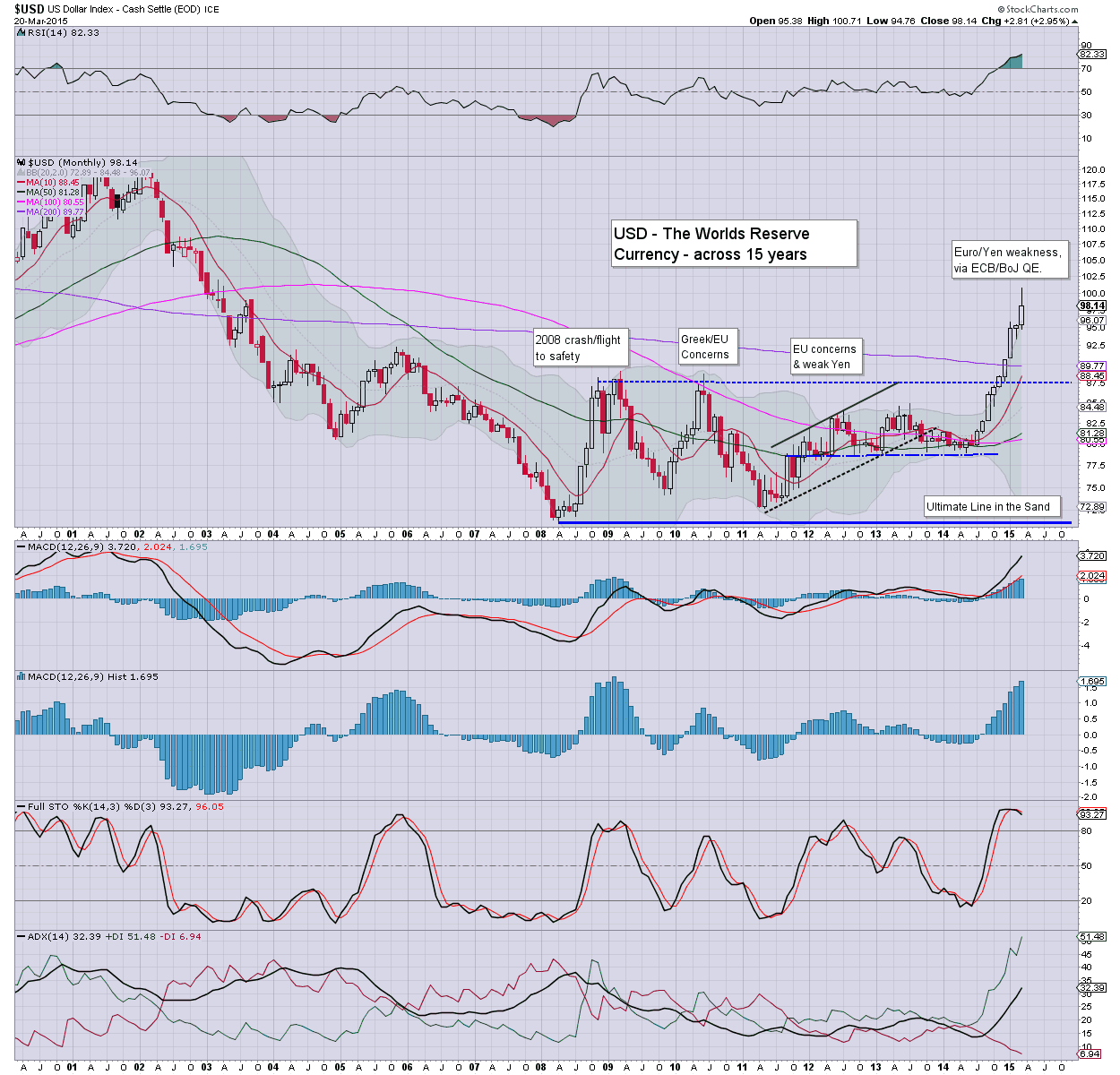 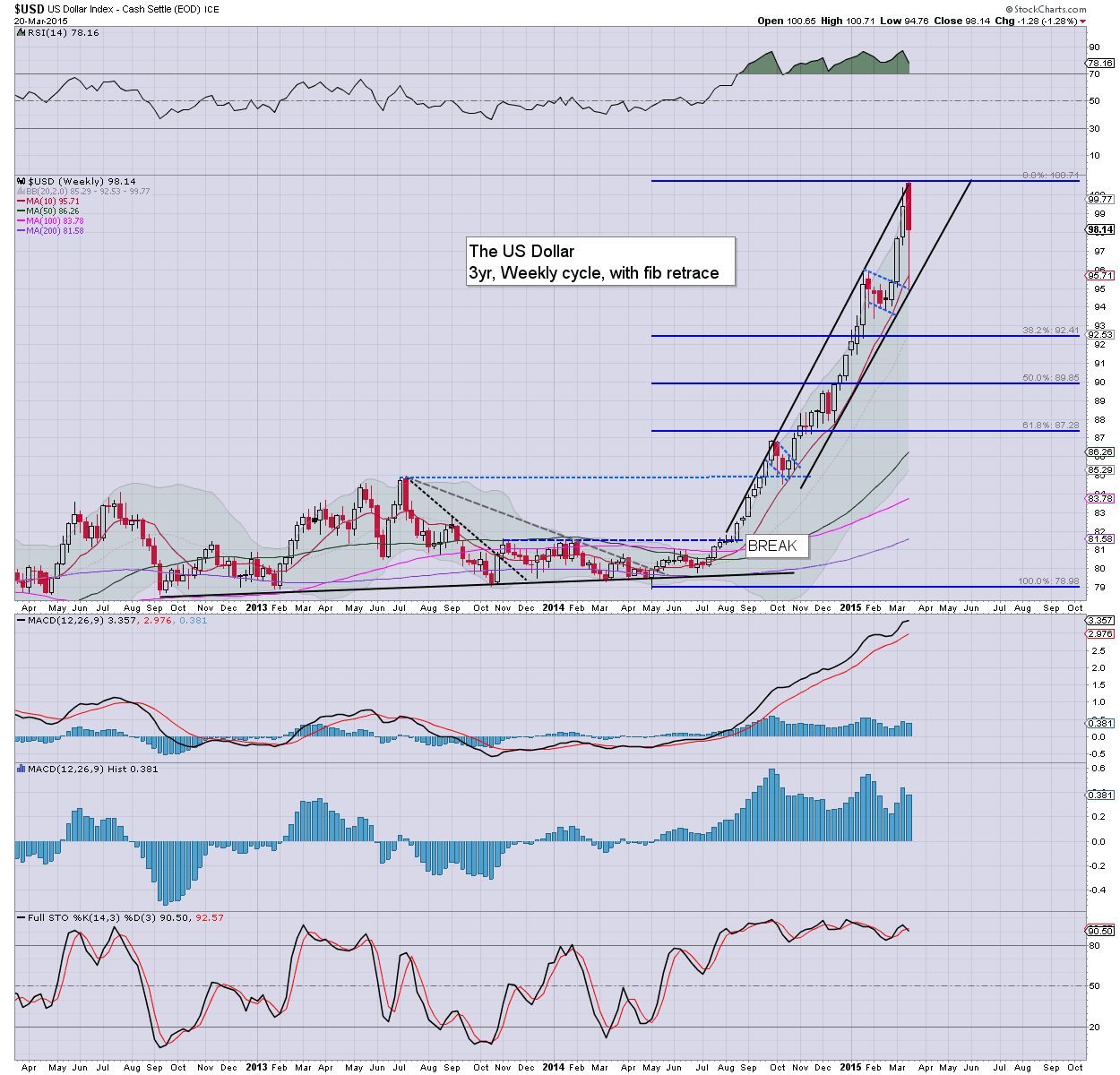 It has been a long week.. so this will be brief - despite the fact I could chat about currencies for a considerable number of pages!
-

The weekly cycle looks maxed out... and even the monthly is now offering the first provisional warning via a moderately spiky-top candle.

A retrace to the breakout - achieved last November, looks very viable across the next few months.

If correct, then a weaker dollar will be very bullish for both the equity and commodity markets.
-- 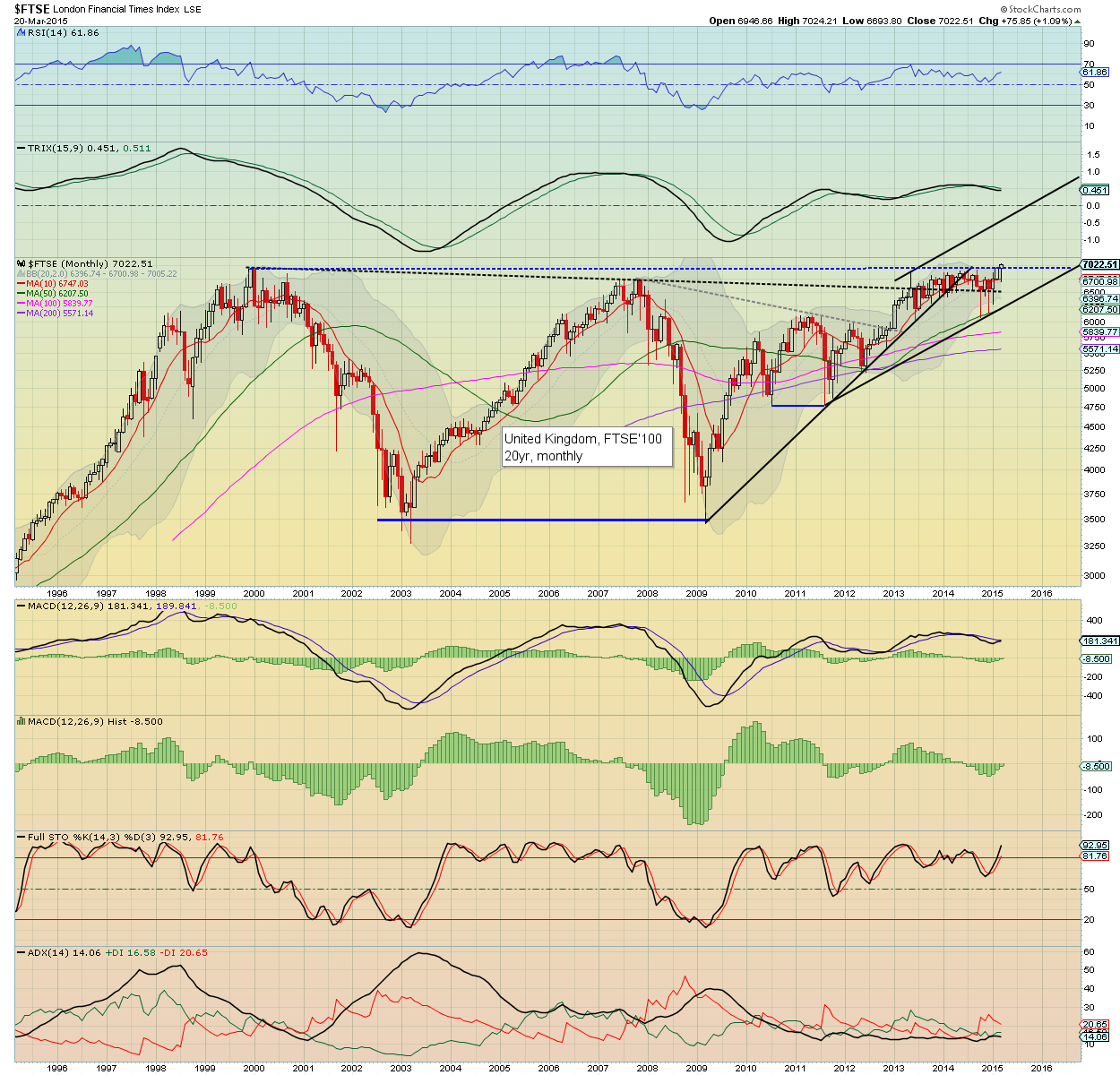 Finally, the UK FTSE has broken the 7k threshold. Next upside is upper trend/channel resistance, which by end year will be around 8k.
-

Have a good weekend
-
*the weekend post will be on the US weekly indexes
Posted by Trading Sunset at 03:00:00
Email ThisBlogThis!Share to TwitterShare to FacebookShare to Pinterest

US equities settled with some borderline significant gains, sp +18pts @ 2108. The two leaders - Trans/R2K, settled higher by 0.3% and 0.9% respectively. Near term outlook remains bullish into April, with next key resistance in the 2120/30s, but with viable upside all the way into mid June. 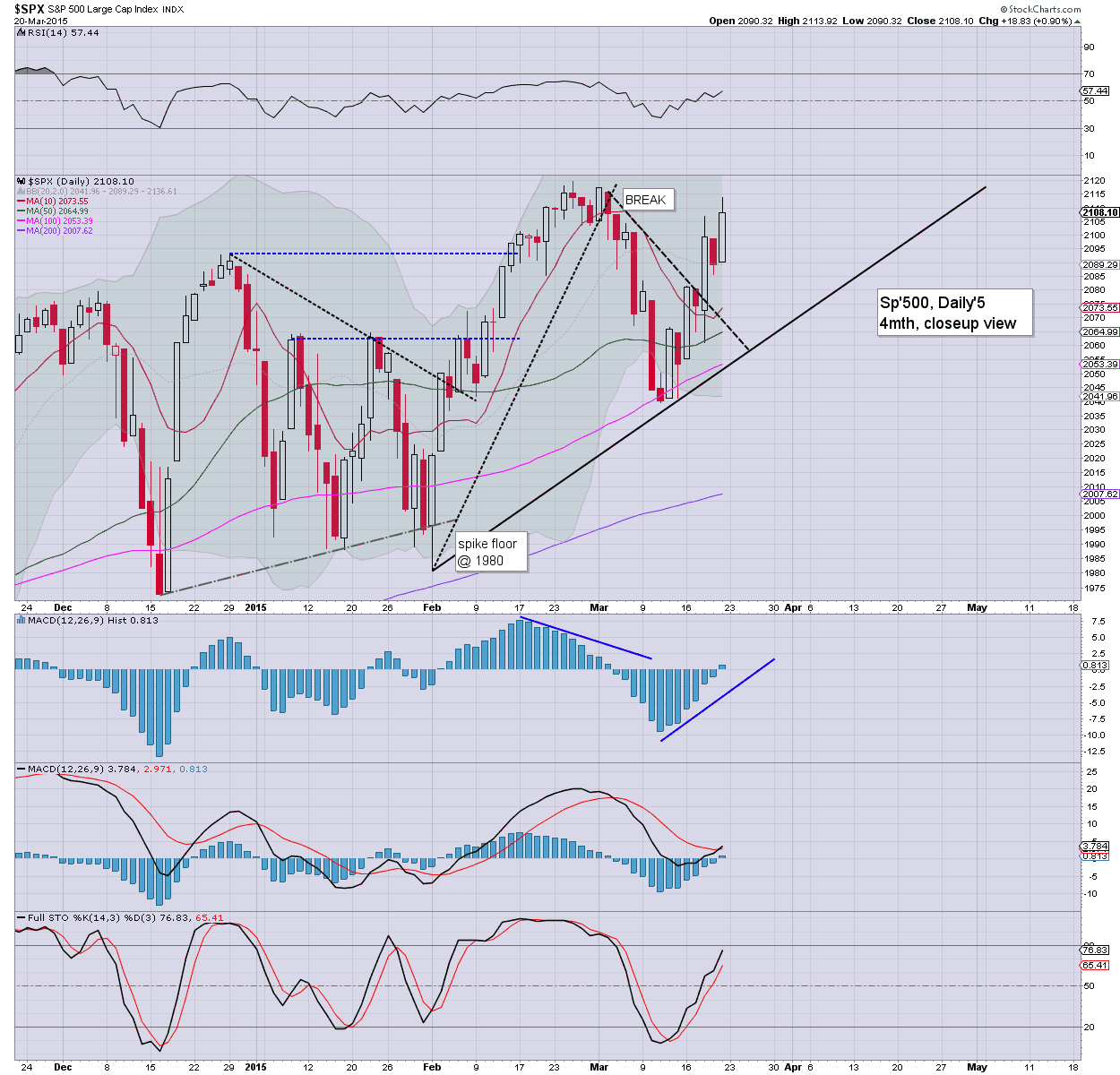 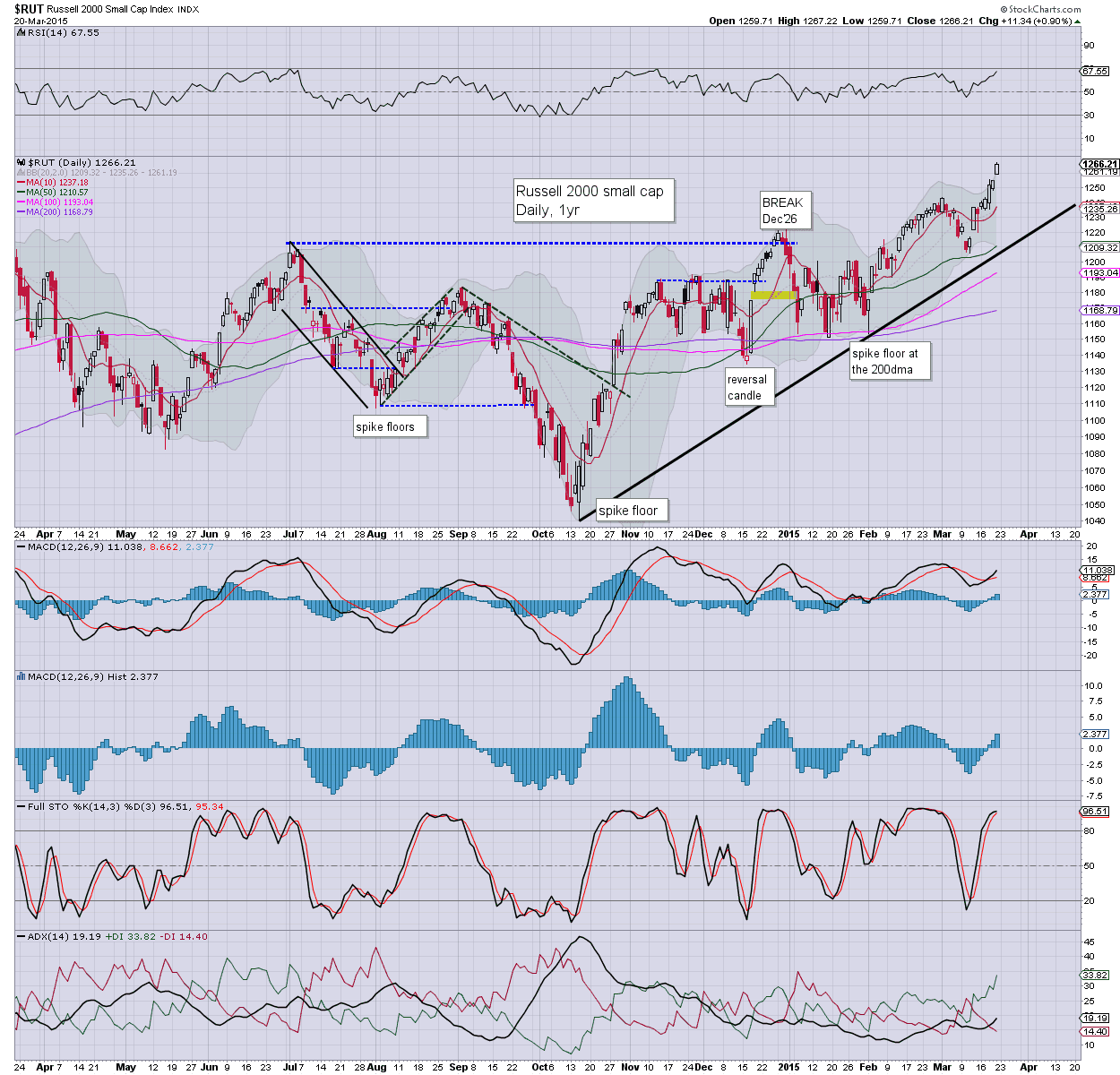 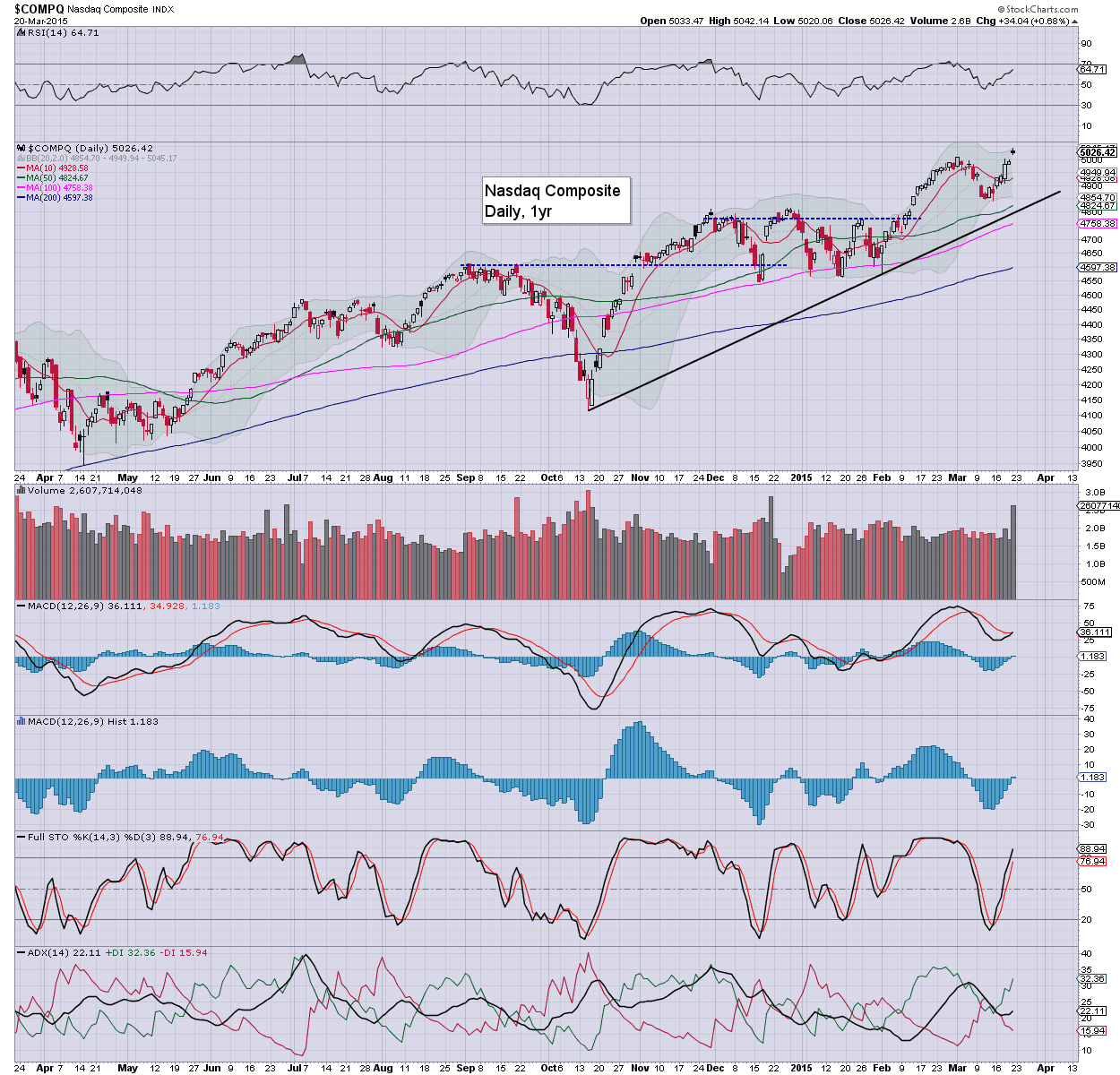 Most notable... since the Oct' low of sp'1820.. it remains a series of broadly higher highs... and higher lows. There is simply nothing bearish here.
--