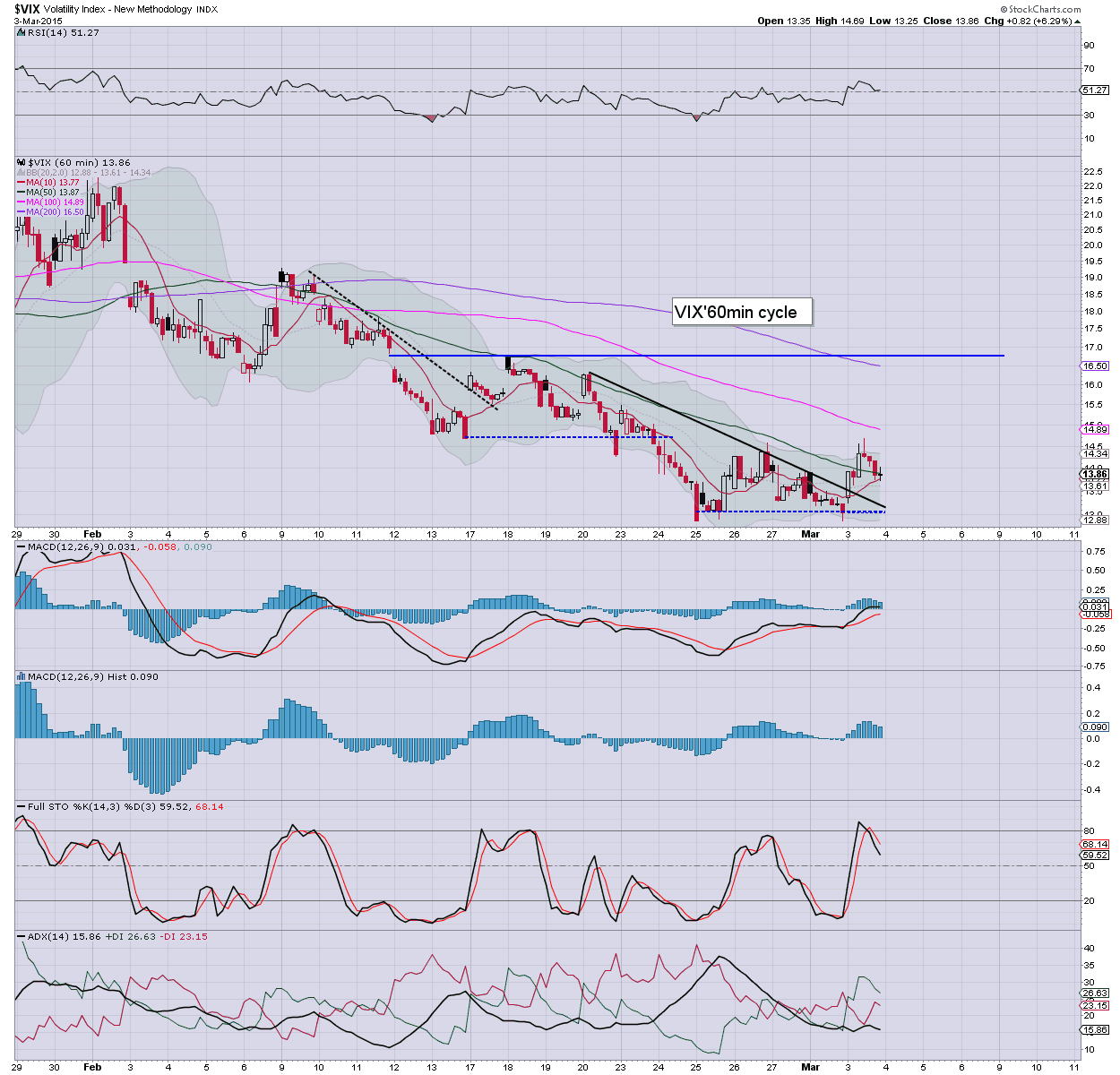 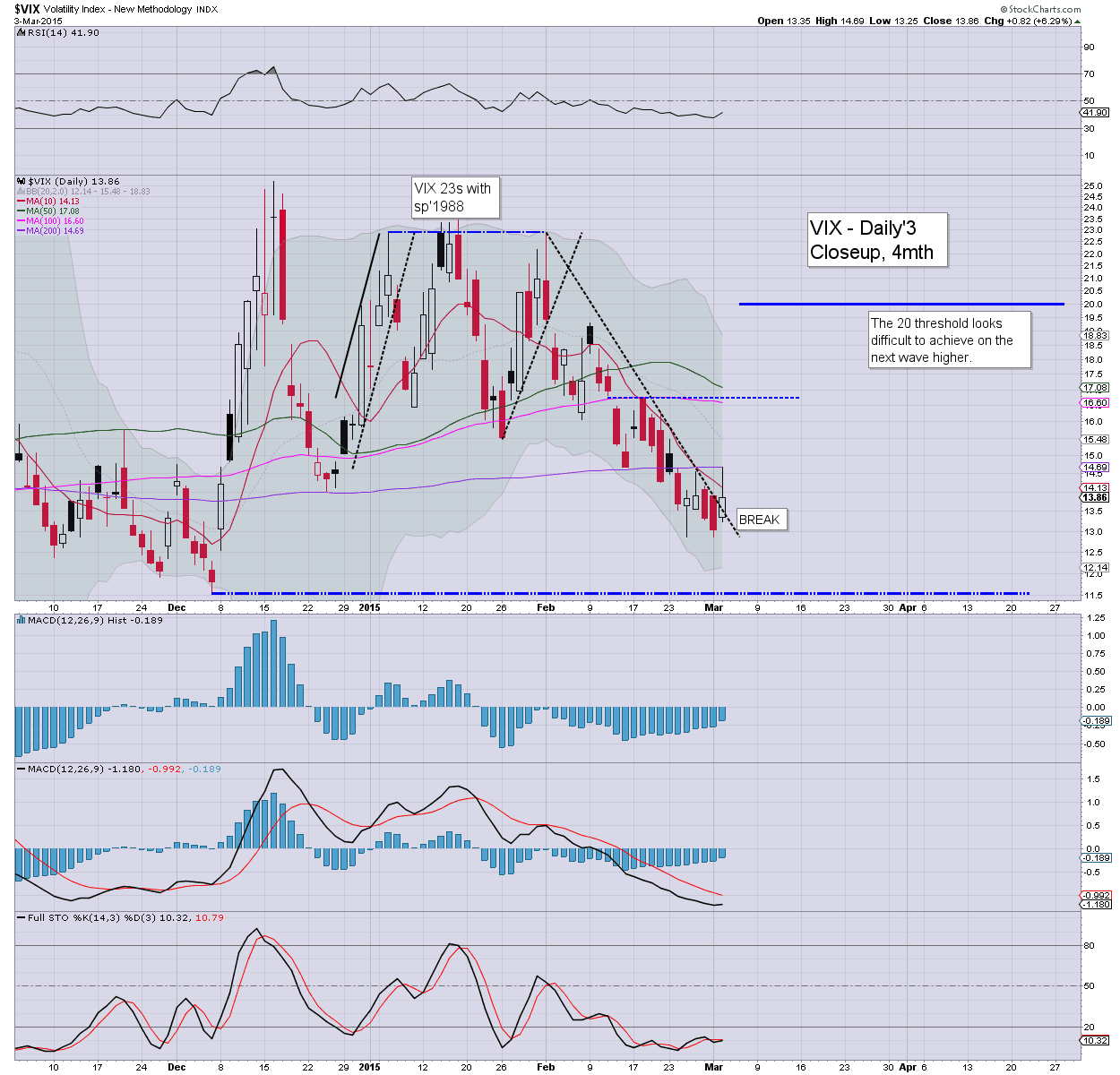 Equity bears at best might see the sp'2060s in the near term, and that should equate to VIX maxing out somewhere in the 17s... perhaps 18s. Certainly, a daily close in the 20s look highly unlikely in the near term.
-- 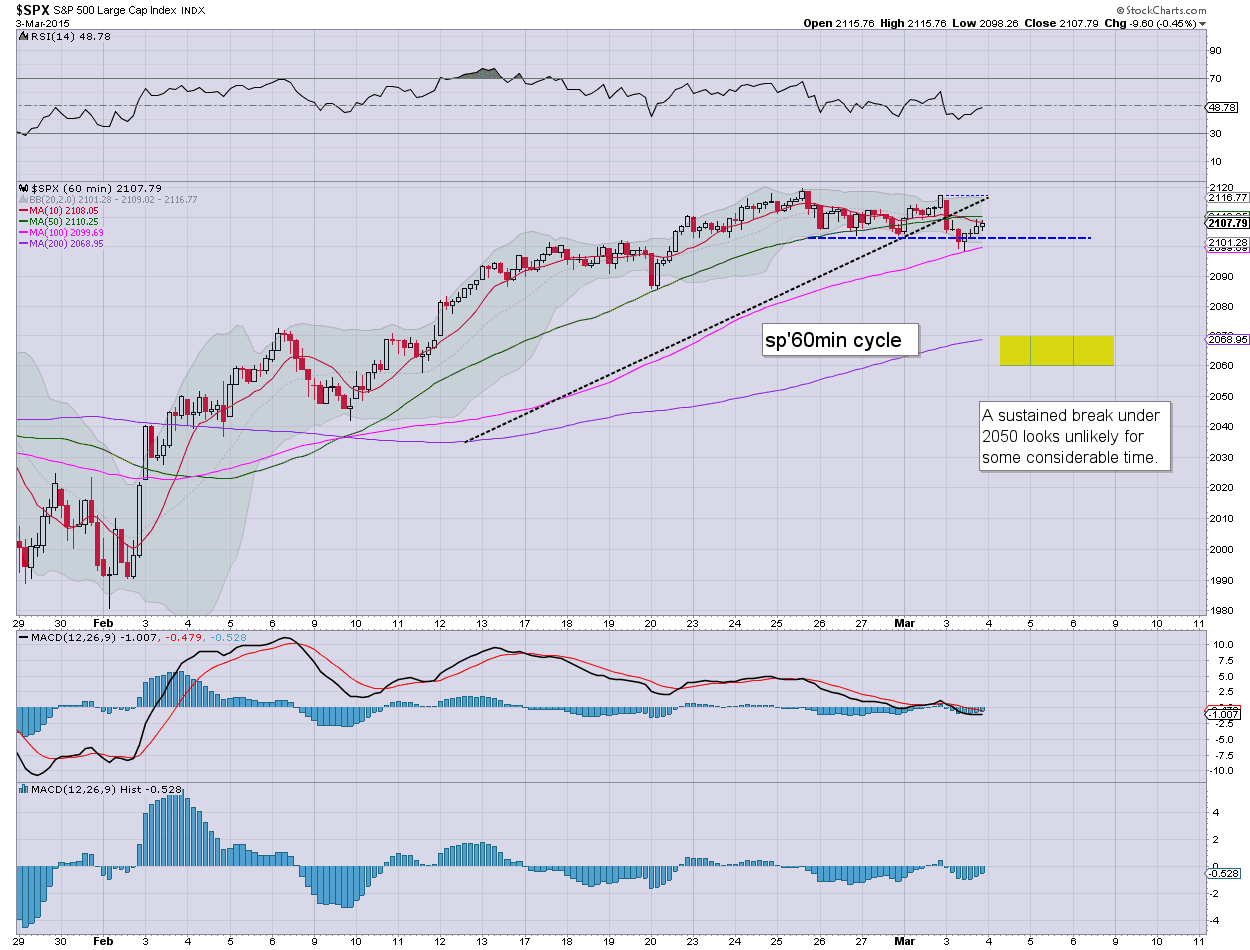 In the scheme of things... a day of mere moderate weakness, but it does open the door to a minor retrace into the sp'2060s.

There is plenty of data in the coming days.. so Mr Market will have plenty of excuse for some more 'moderately' dynamic price action. 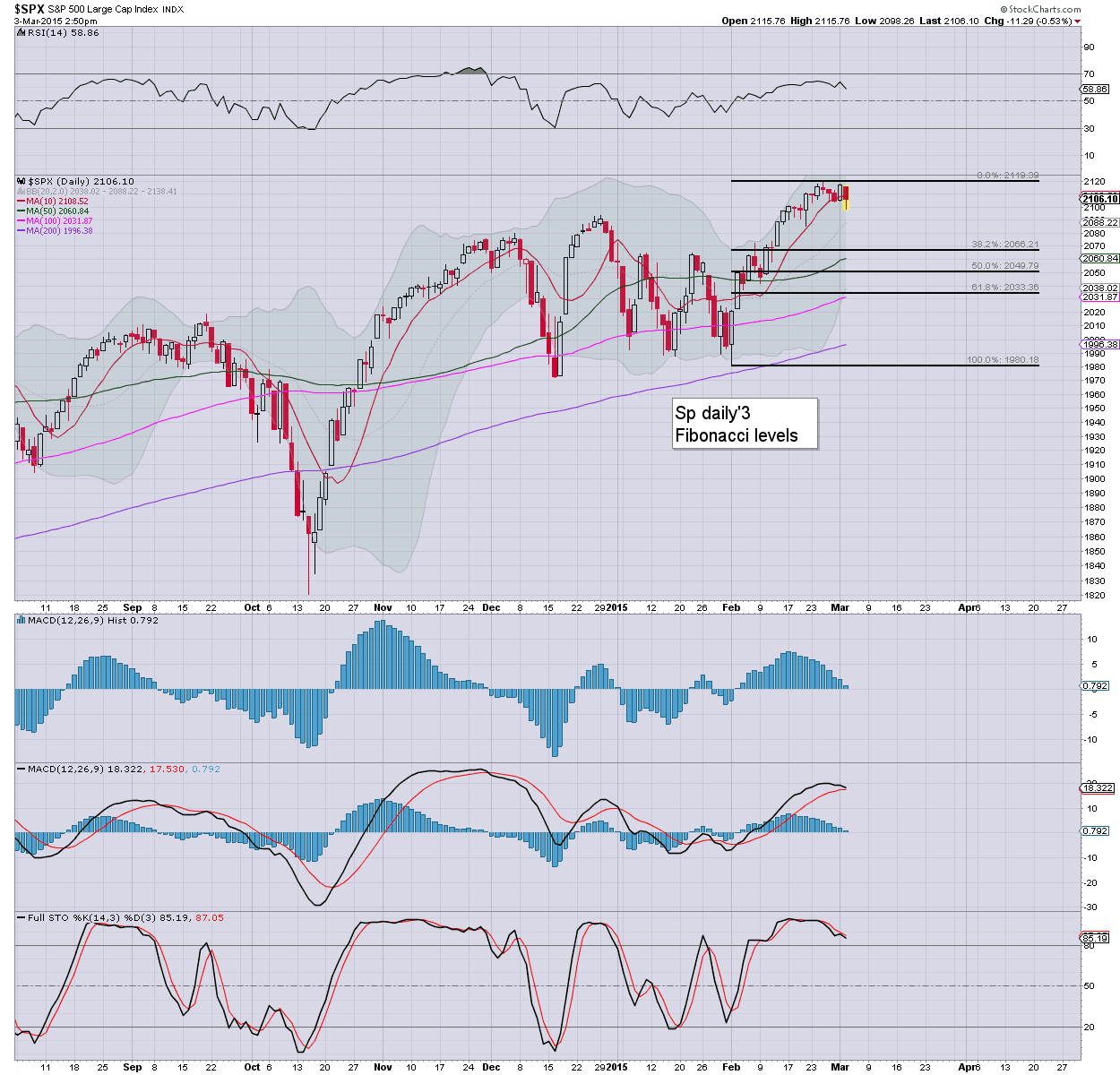 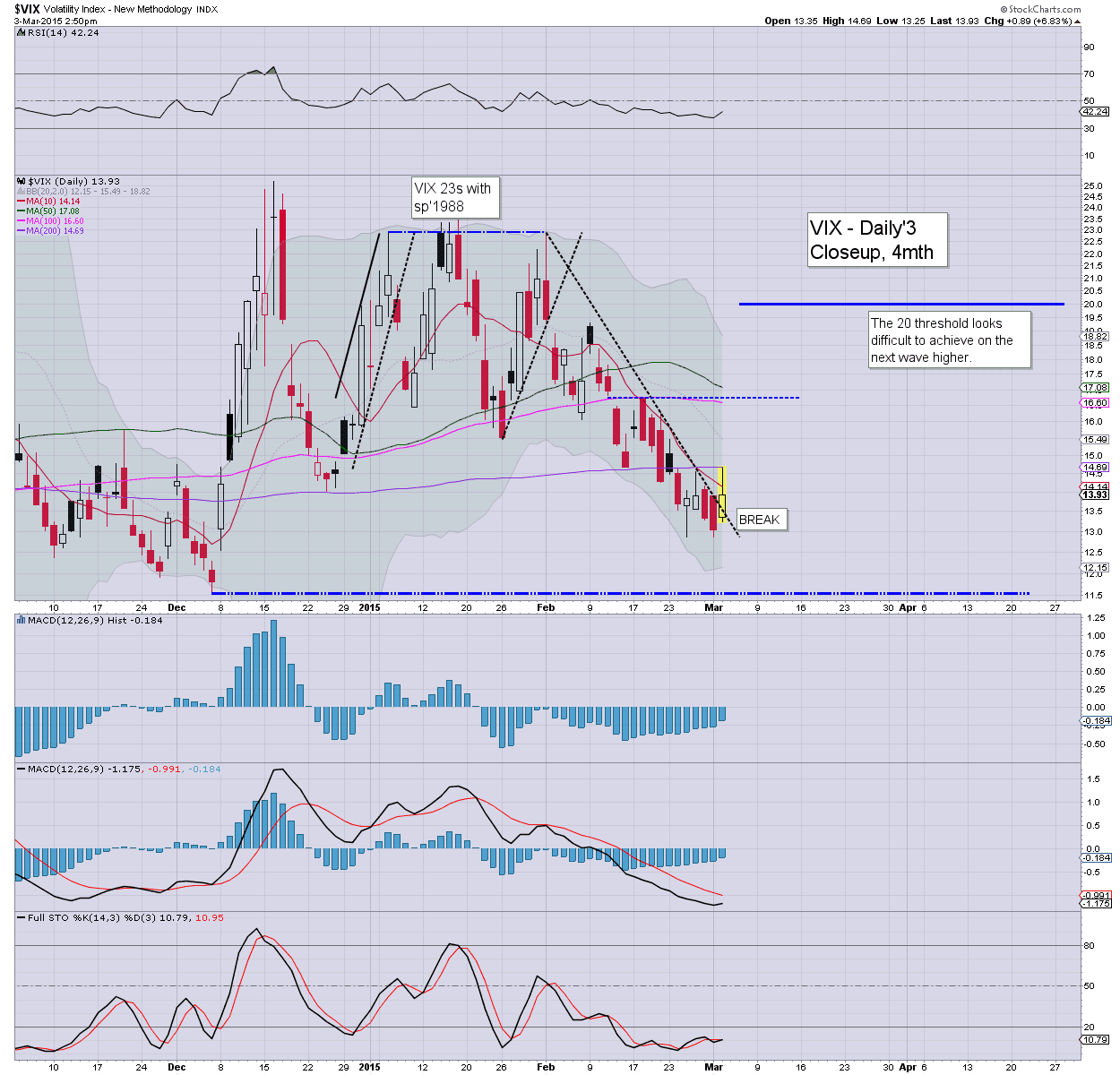 Notable weakness, STX -4.7%.... having seen a spike-fail yesterday.
Posted by Trading Sunset at 19:55:00
Email ThisBlogThis!Share to TwitterShare to FacebookShare to Pinterest

US equities remain moderately weak, with the sp' having earlier slipped to 2098. VIX is confirming the move, having already hit 14.68. Renewed equity weakness into the close looks probable. Metals remain a touch weak, Gold -$1. Oil is battling to stay positive, +0.6%. 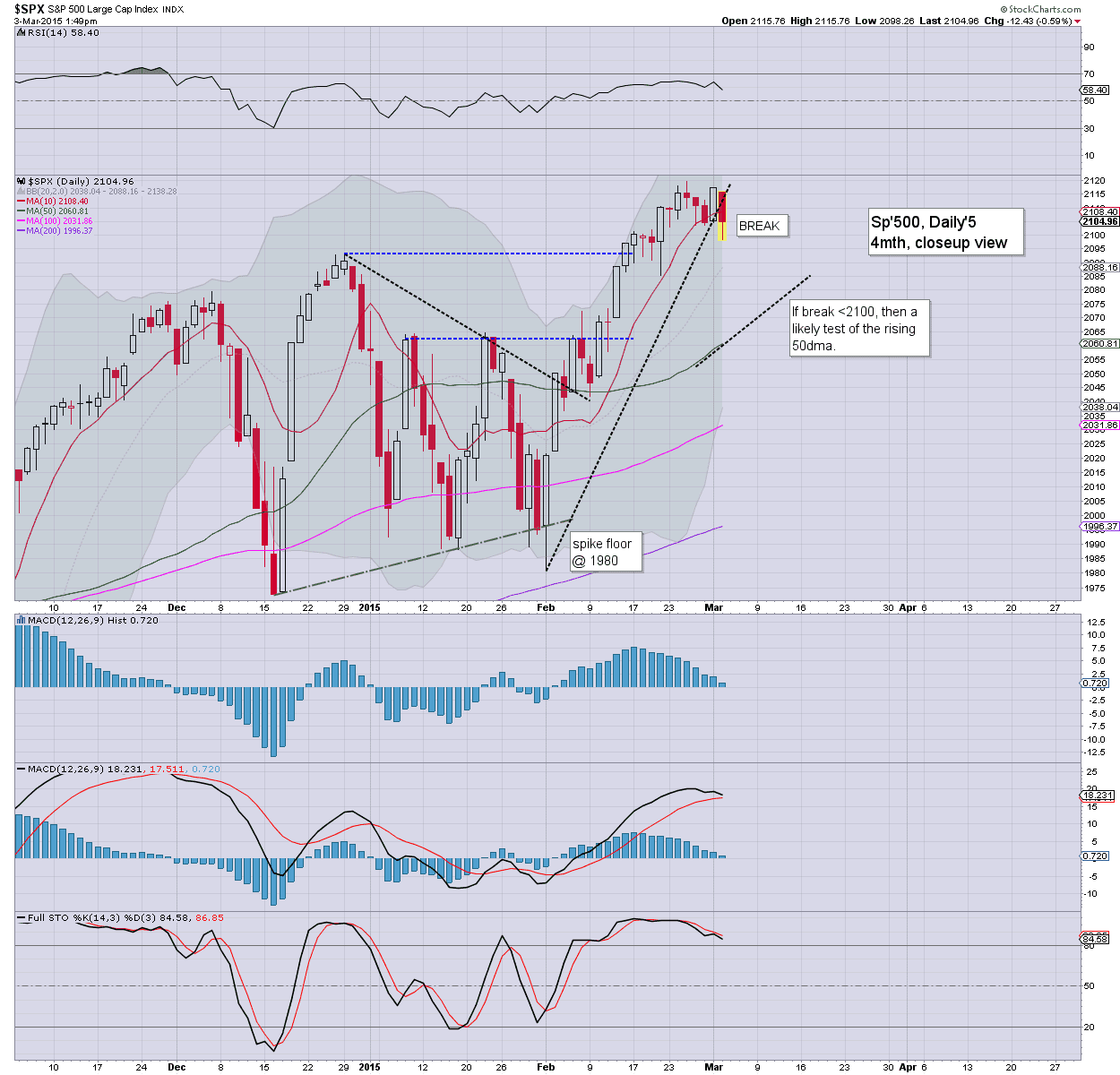 The technical damage has been done... a retrace should play out fully across the next few days. ALL the indexes are offering a bearish MACD cross - whether already today... or tomorrow. 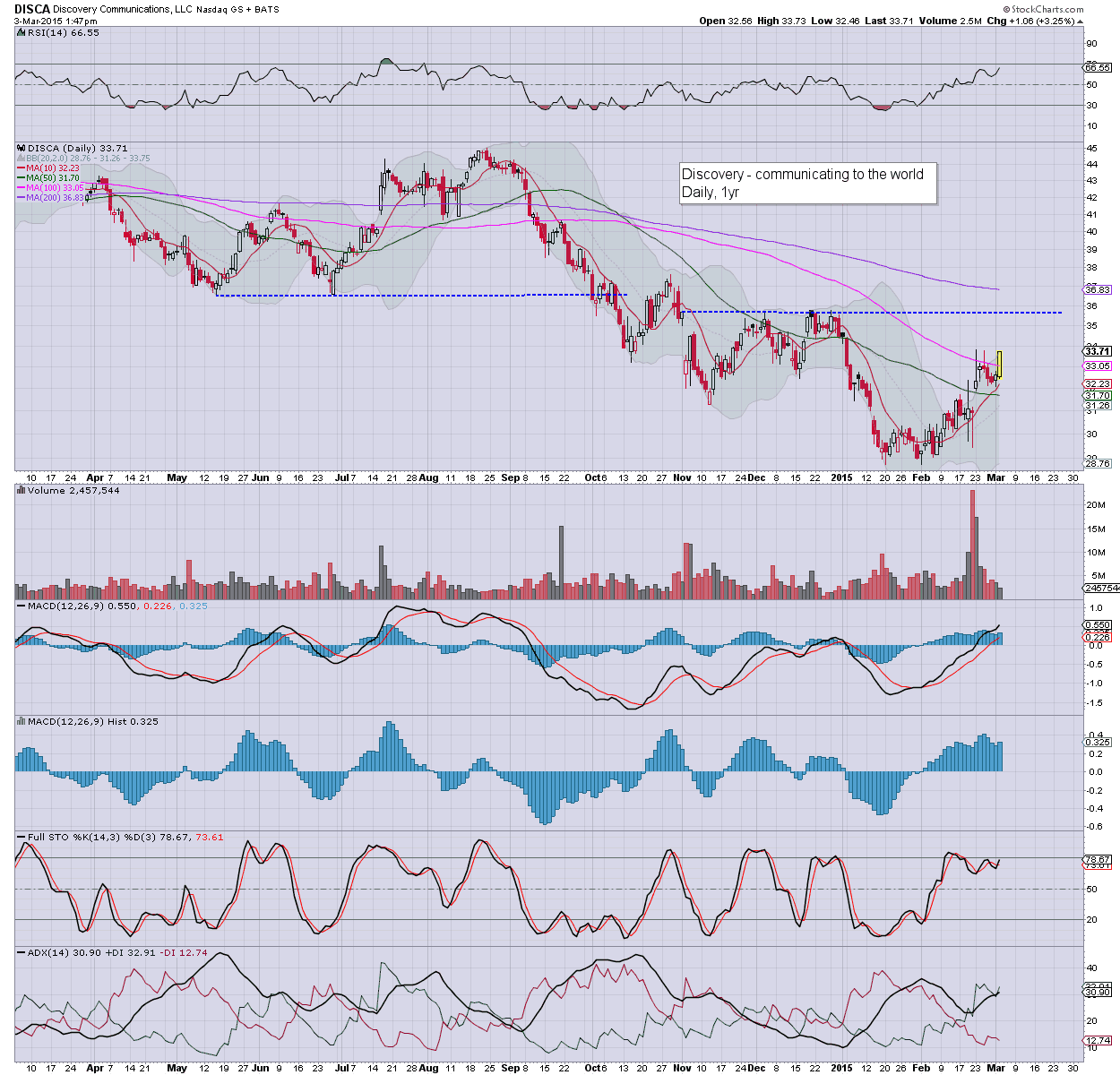 With bid rumours still circulating... this is surprisingly strong today. Last August, DISCA was in the mid $40s.... a move to the big $50 threshold seems a given... just a matter of when.
-

US equities appear to have begun a retracement... if very minor. There are multiple aspects of support in the sp'2060s... which will probably equate to VIX in the 17s. Metals remain weak, Gold -$1. Oil has built sig' gains of 1.3%... no doubt on war-talk. 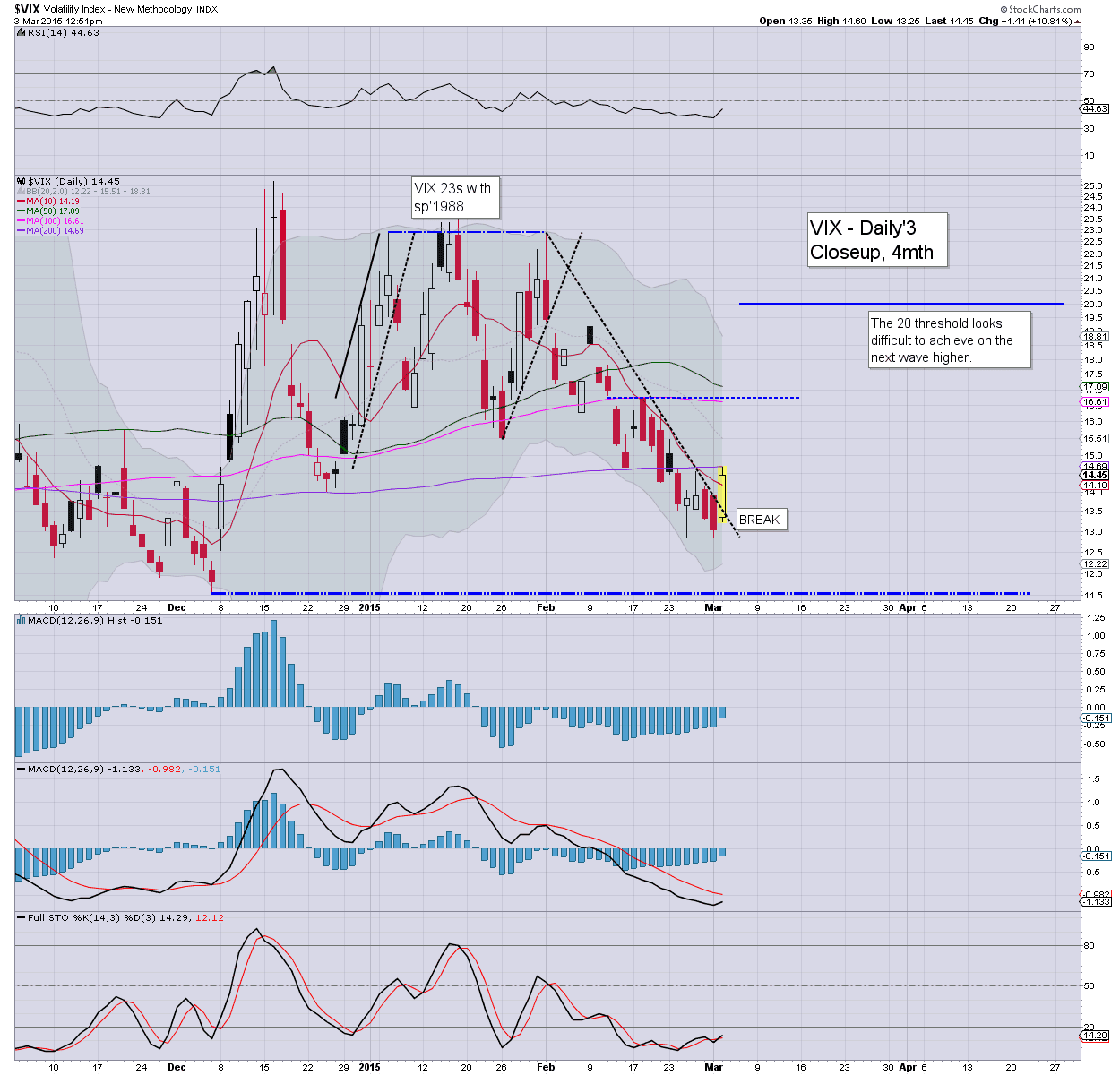 I'm aware some are seeking a move to just the 2080s... but it'd seem more natural for a slightly bigger move to test the 50dma.

Certainly... a move to the 2060s is viable this week, but sustained trading <2050 looks highly improbable... not least with the ECB QE-pomo set to begin. 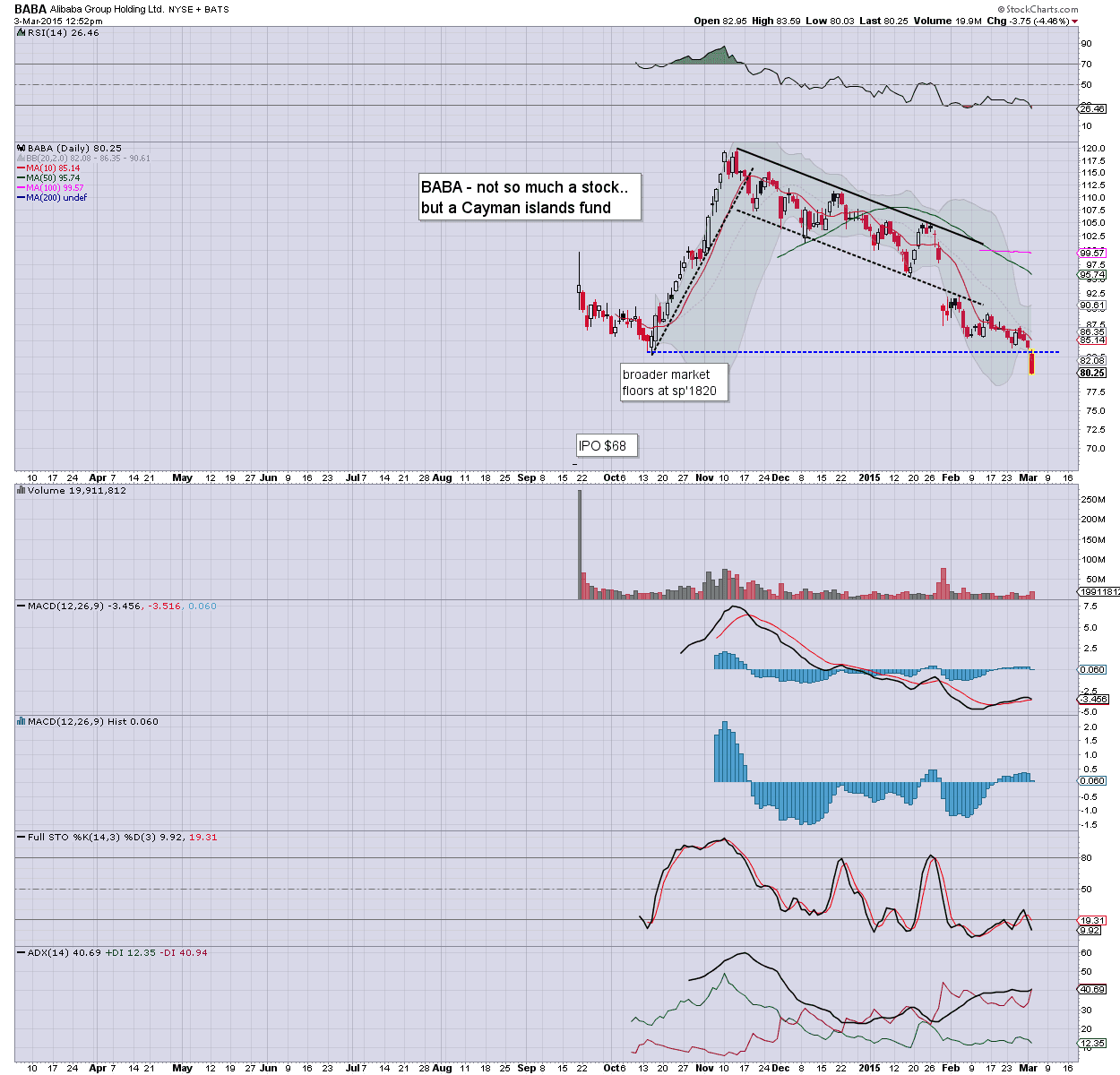 There is now rather obvious downside to the original IPO level of $68.
-

stay tuned!
Posted by Trading Sunset at 17:55:00
Email ThisBlogThis!Share to TwitterShare to FacebookShare to Pinterest

The US market has finally started to break lower, having ramped from sp'1980 to 2119. A natural retrace would be to test the rising 50dma in the sp'2060s.. where there are other aspects of support. Metals remain weak. Oil is trying to build gains, +0.9% on war talk from Netanyahu to the US Govt. 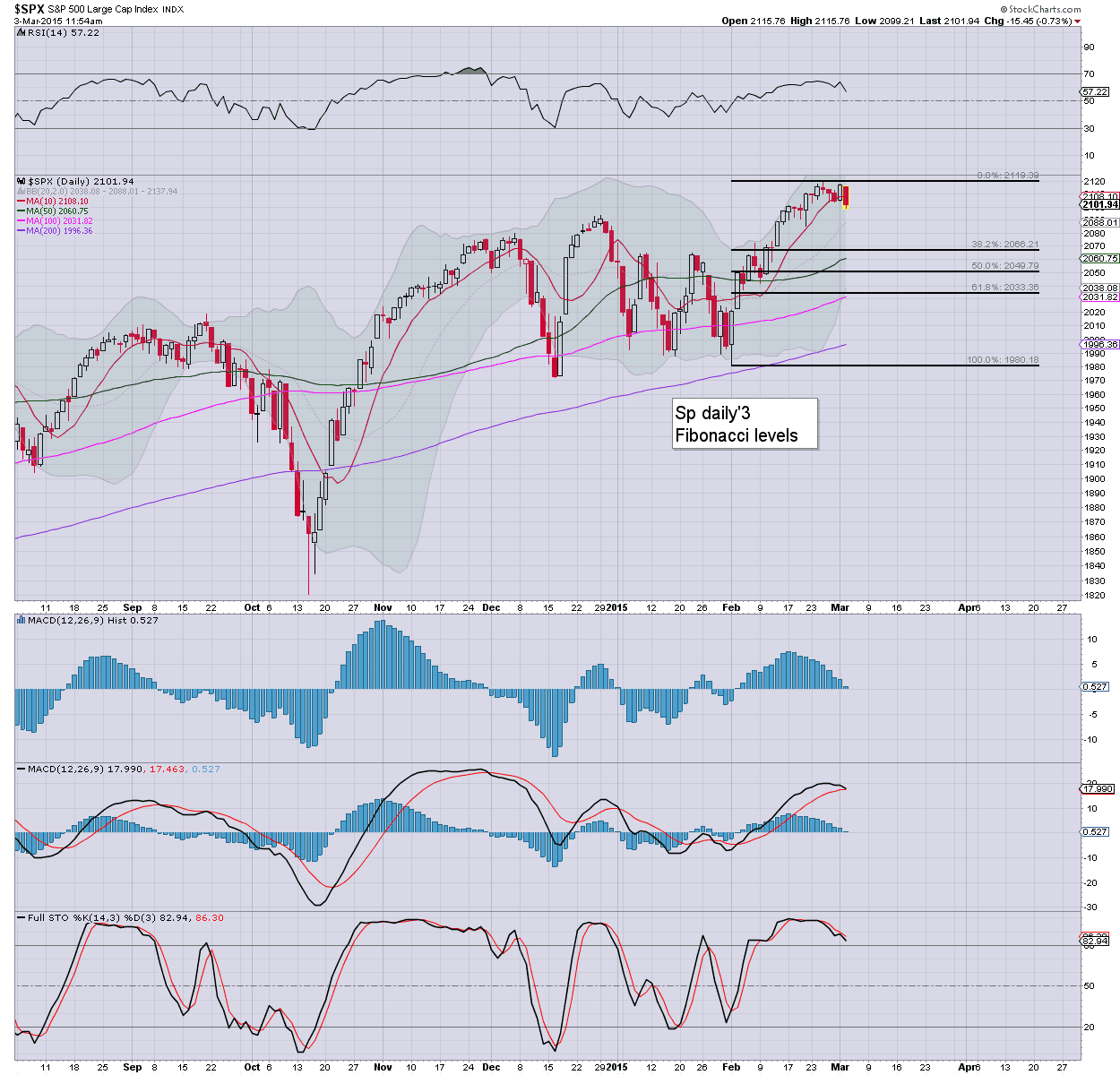 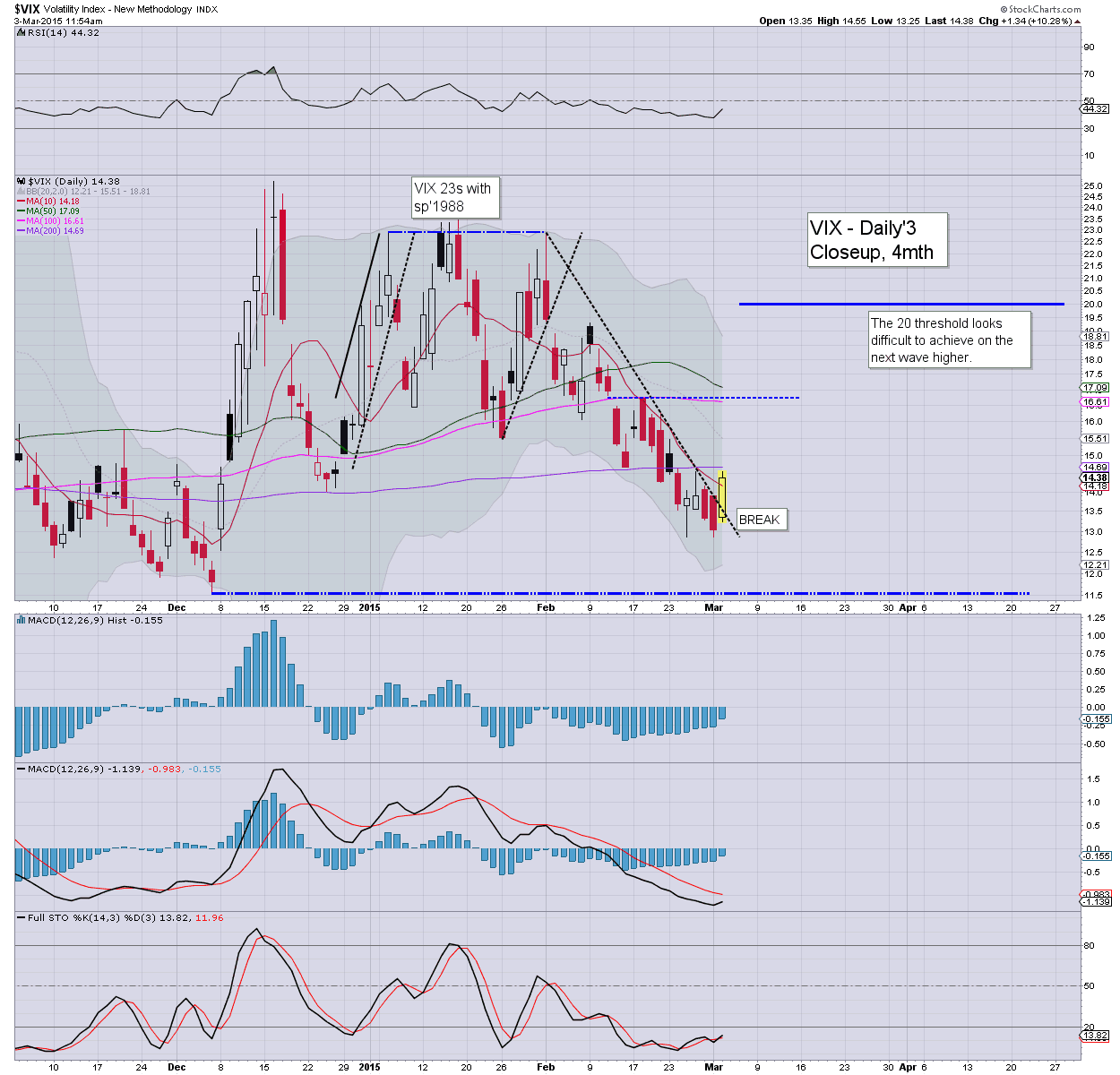 So.. we're finally seeing some breaks... with the daily MACD cycles seeing bearish crosses all over the place.

--
time for lunch... back at 1pm
Posted by Trading Sunset at 16:55:00
Email ThisBlogThis!Share to TwitterShare to FacebookShare to Pinterest

11am update - still nothing significant

US equities remain in the red, but the declines certainly don't rate as significant, and there will always remain the threat (if not likelihood) of latter day upside. Until a break <sp'2100, there is simply nothing for the bears to get even marginally excited about. 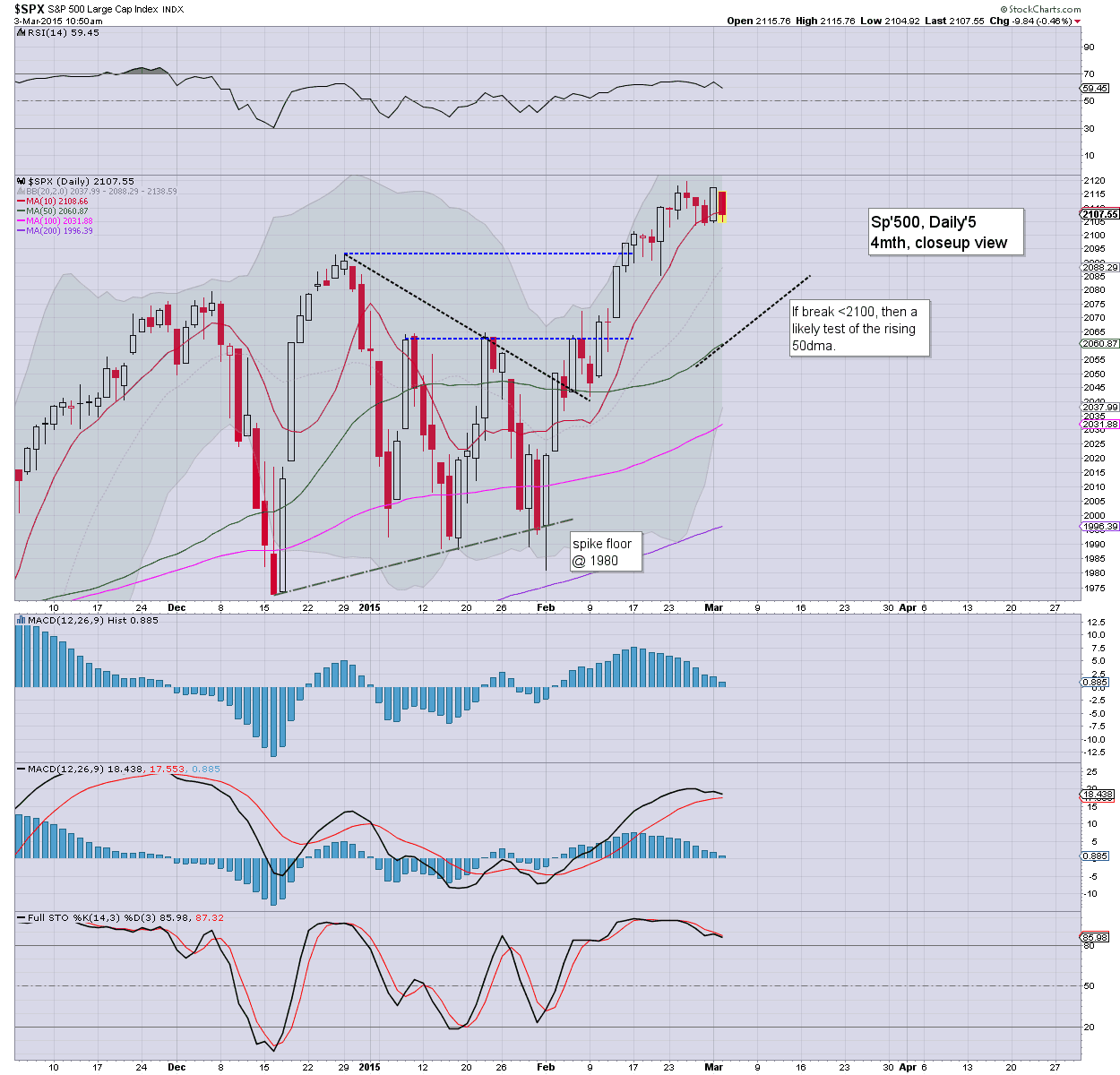 It remains lame how even a brief retrace/test to the 50dma - now in the 2060s, is about the best the bears can hope for. The giant 2K threshold looks set to hold for some months... if not the year. 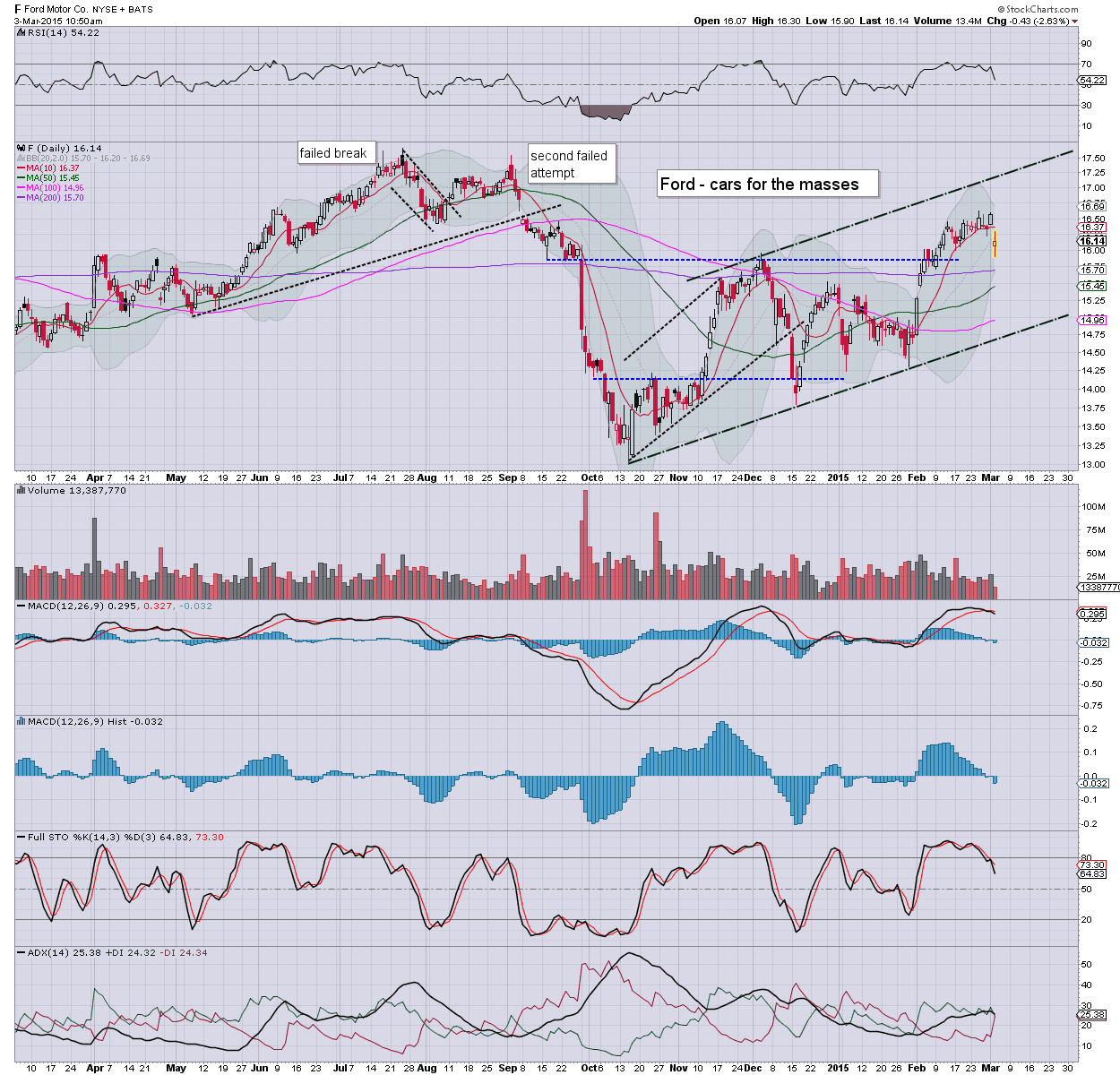 Eventually... Ford should see a monthly close in the $18s... which will be a key warning that a broader hyper-ramp is underway in second half of the year.
- 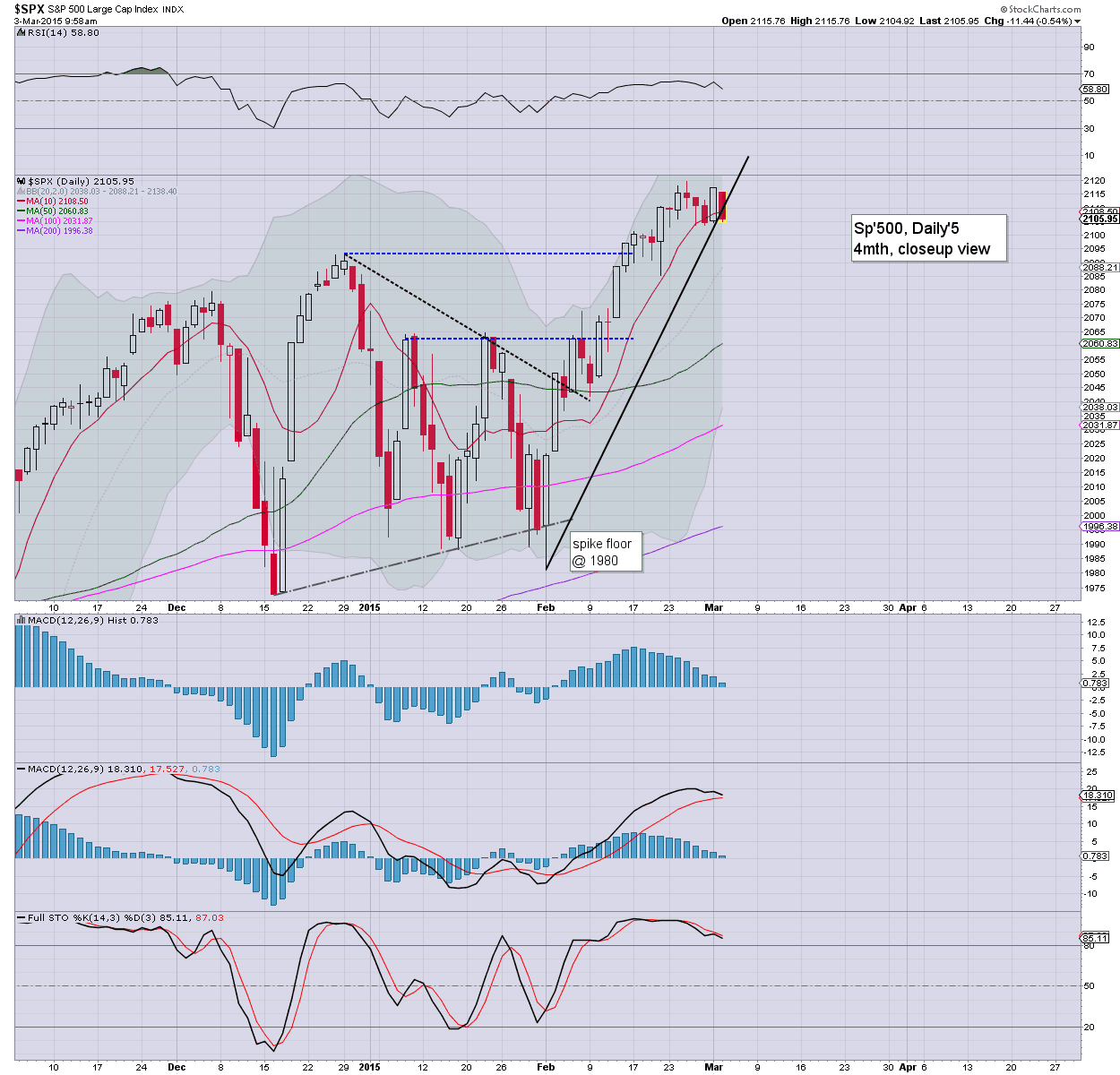 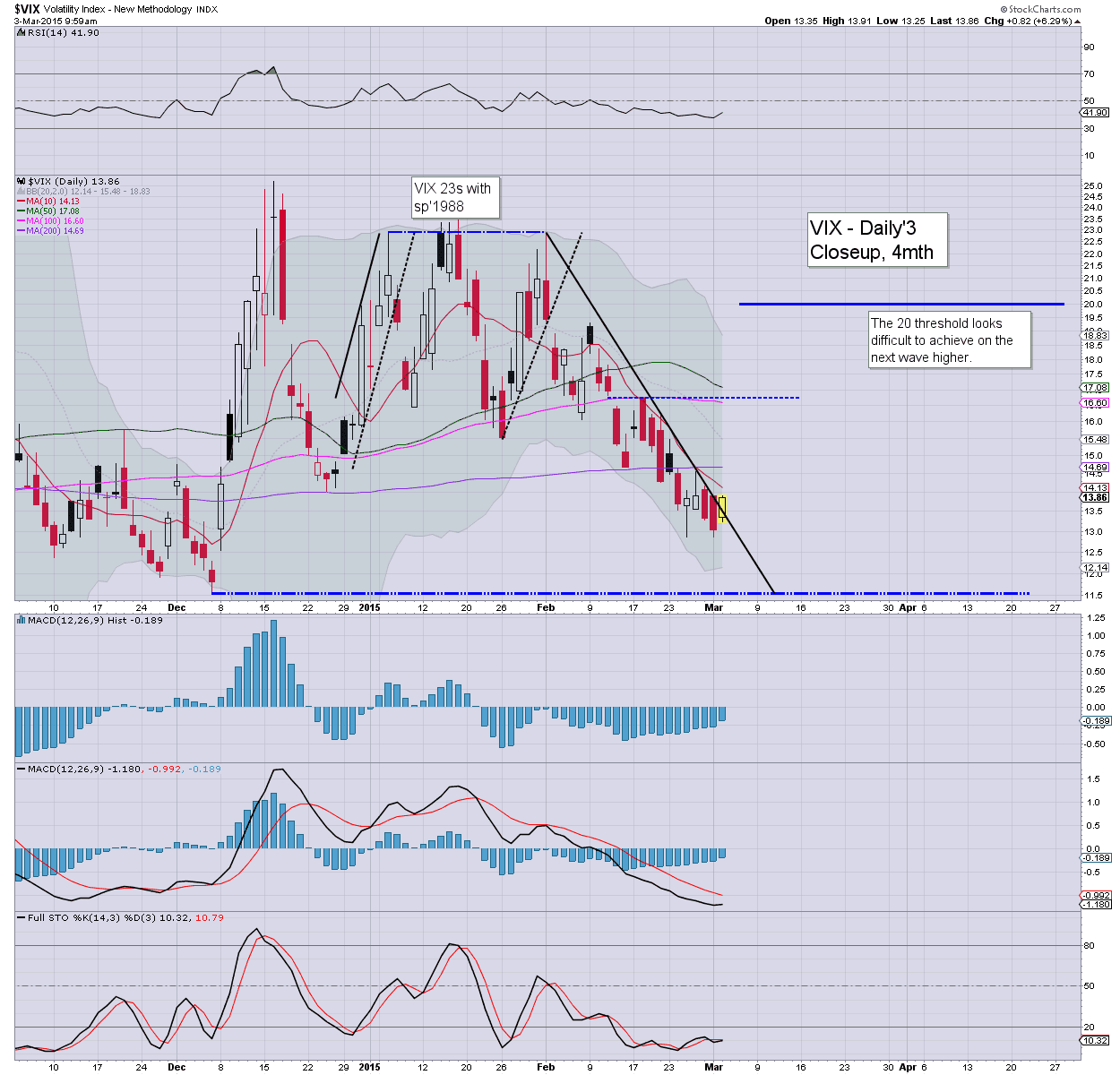 As ever... it usually remains a case of morning weakness... and then latter day algo-bot melt.

The one thing the bears do have... daily MACD cycle is due to see a bearish cross today/tomorrow for most indexes.

Right now... VIX max' case are the 18s, but that is declining each day.
-
Posted by Trading Sunset at 14:59:00
Email ThisBlogThis!Share to TwitterShare to FacebookShare to Pinterest

Good morning. Futures are a little lower, sp -6pts, we're set to open at 2111. Metals are a touch higher, Gold +$2. Oil is set to open broadly flat, but as ever.. set for further significant intraday swings. 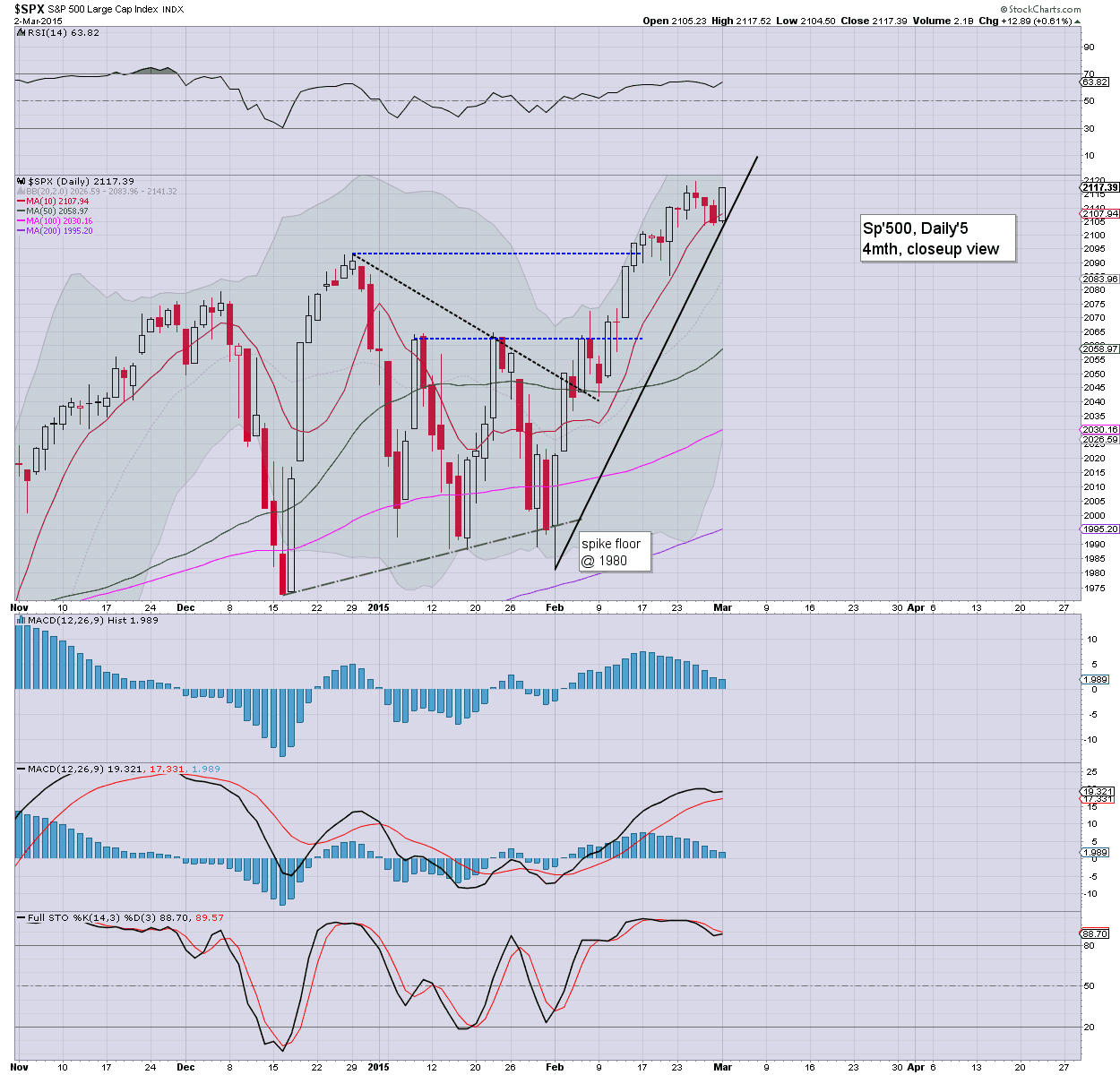 So... a little weakness to start the day, but considering yesterdays set of new highs, there is little reason to hope of a trend change.

--
Update from an especially loud and confident Oscar

--
Have a good Tuesday
Posted by Trading Sunset at 13:22:00
Email ThisBlogThis!Share to TwitterShare to FacebookShare to Pinterest

Somewhat understandably, the cheer leaders on clown finance TV were pretty joyous this morning as the Nasdaq Comp' broke the giant psy' level of 5K. Yet... things really only get interesting with a monthly close in the 5200s. From there... 6K is easy.... then 7K... and... far beyond. 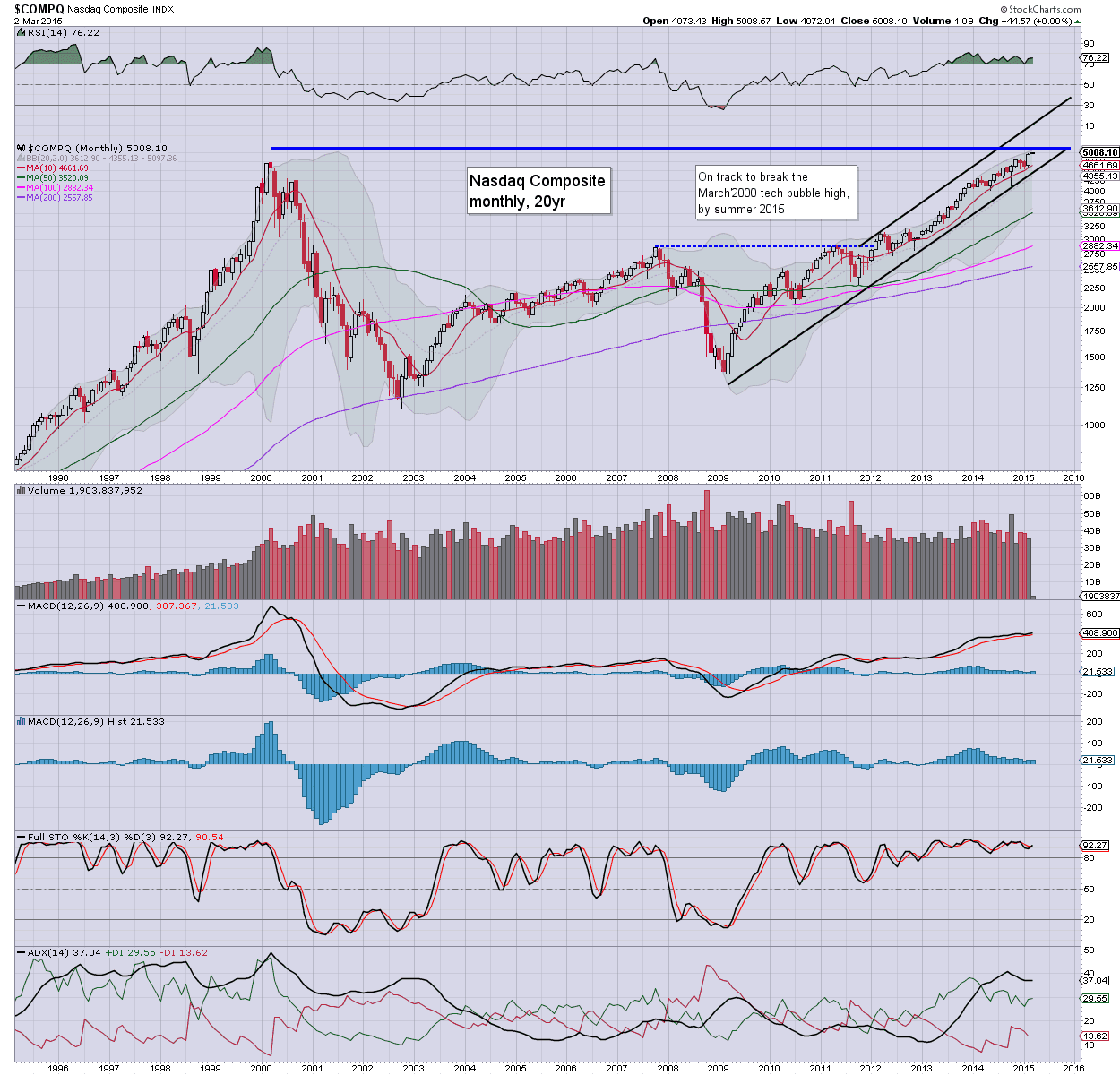 As I have been noting for many months, 5K seemed a given.. and here we are... and its not even officially spring yet.

Whether the intra high of 5132 is broken this month, April... or a little later... should make little difference to those who are broadly long the US equity market.

Tuesday will see very little. Yellen is due to speak.. but it will be on bank regulation, and I don't believe the market will consider it important.
--

US equities broke a trio of new historic highs, with Dow 18288, and R2K 1243. Most notable though, was the Nasdaq Comp', hitting the giant psy' level of 5000. Near term outlook offers the sp'2130s into the monthly jobs data... before the next minor retrace. 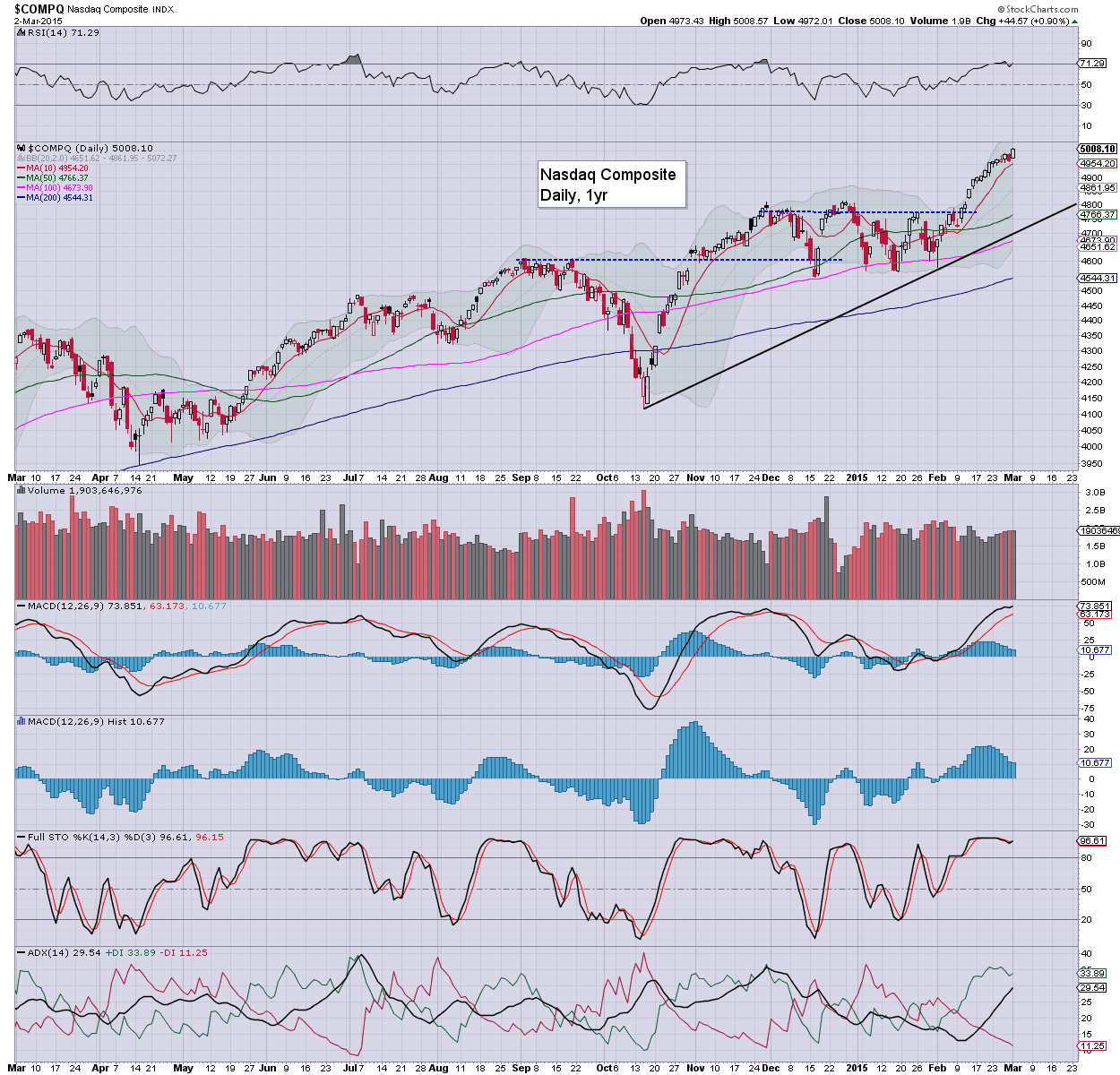 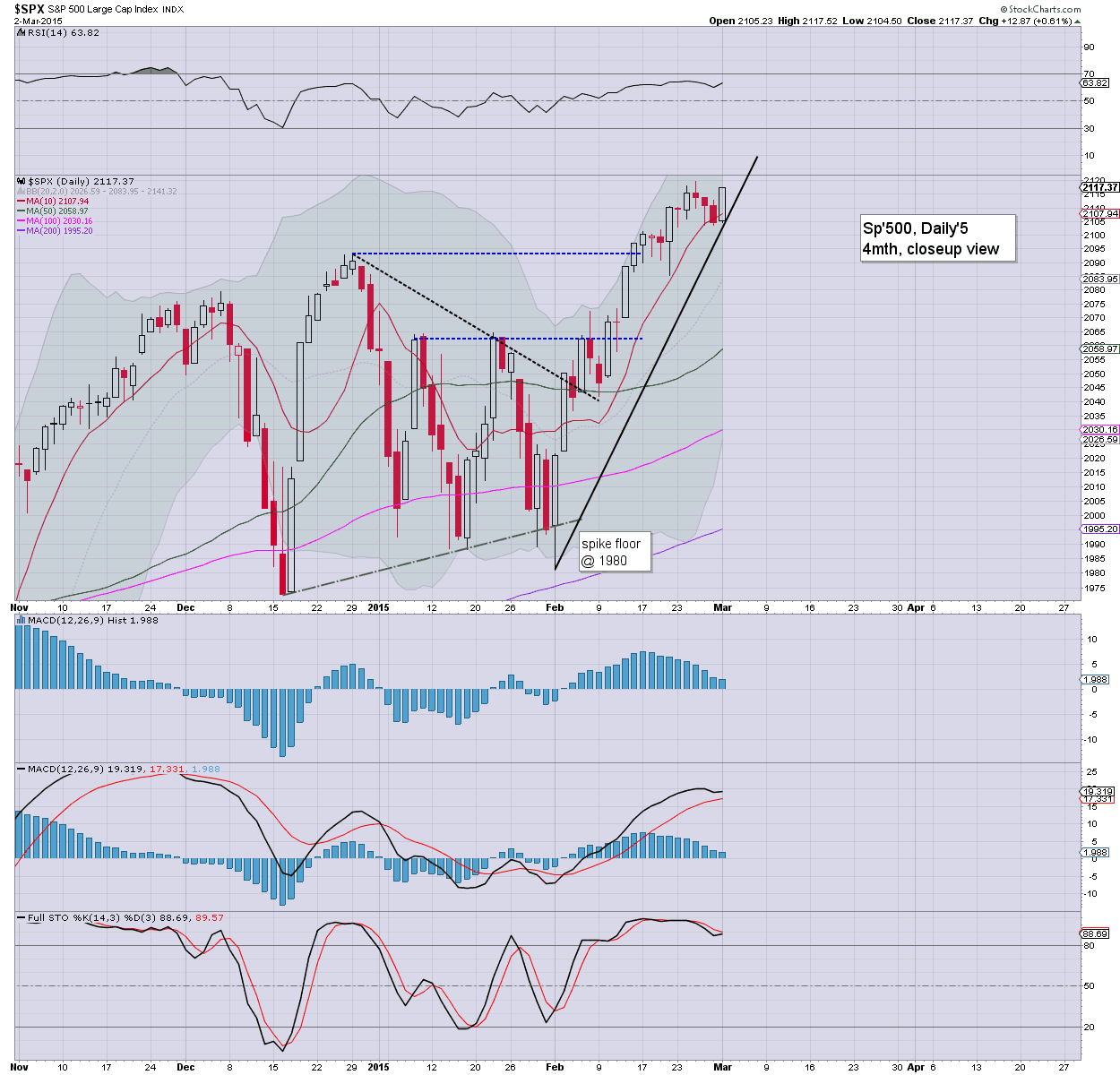 Little to add... on what was just another day for the equity bull maniacs.