Volatility weak into the close

The VIX held up very well during the day, and traded from -4% to +2% on the FT posting, yet with equities rallying back into the close, the VIX closed -2% @ 16.80  Daily VIX trend looks weak, and if the Fed doesn't upset the market, VIX will soon be in the 14s. 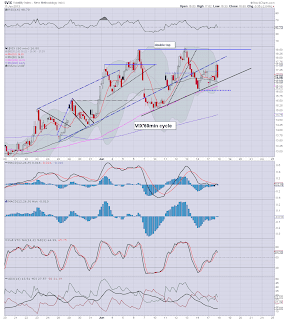 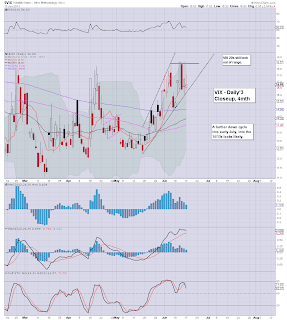 Equity bulls look set for sp'1670s this week, which would likely equate to VIX 14s.

The main indexes were looking very strong for much of the day, until an FT news posting was interpreted by Mr Market as 'imminent Fed tapering'. Yet..the market still closed rather strongly into the close. With daily charts increasingly bullish, bulls are generally building strength. 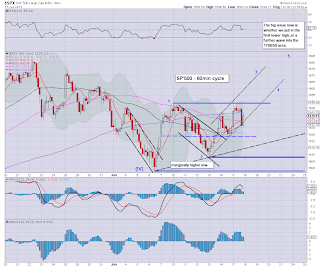 Certainly, the bulls got spooked, and the bears saw a bit of downside, but really, one hourly downside candle, is nothing to get too excited over.

So long as the 1608 low holds, bulls have nothing to be concerned about.
--

*I am entirely on the sidelines, having dropped IWM, MRO (longs)..and SLV (short).

Will consider another index long, early Tuesday, sp'1625/20 would be a nice level to get back in.
Posted by Trading Sunset at 21:01:00
Email ThisBlogThis!Share to TwitterShare to FacebookShare to Pinterest

It would appear an FT posting that 'the fed will signal tapering' has spooked the market. We've dropped from sp'1646 to 1632..and there is no sign of it stopping yet. Hourly index charts are a problem for early Tuesday. Best case 'bearside' target would be 1620 at the Tuesday open. 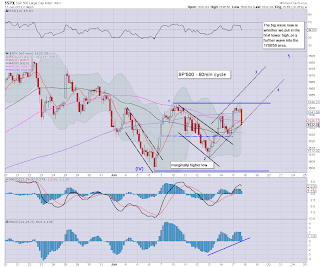 Wow, sp'1632s..and its looking ugly on the hourly chart now.

*I am entirely on the sidelines (dropped SLV-short earlier)..and aim to sit it out until early Tuesday.

On ANY basis, I will again seek to pick up a new index-long early Tuesday..preferably in the 1625/20 area. That would seemingly be a very good level, at least for a day-trade.


Eyes on the VIX...especially early Tuesday. 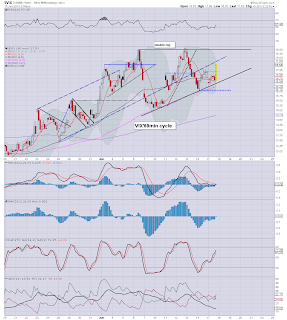 I don't think it can do it, but hell, I ain't going long, this market is in a bad mood now.

Considering the daily charts..I do NOT believe the market will take out 1608 for a few weeks, if not August. 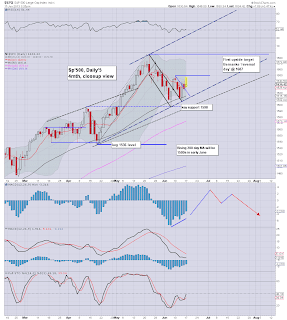 *I'm on the sidelines, and will consider an index-long early Tuesday...NOT today. There just looks to be too much risk of gap-down early tomorrow into the low 1620s.


3.38pm.....and that is why its too risky on the short-side. From clown channel, seems the FT writer is now on twitter posting more nonsense.

This market is WEAK, its edgy..and terrified that the QE-pomo stock-ramp juice is going to be cut.
-
I still think there is possibility of Tuesday gap-lower, but even sp'1630 now looks a fair way lower.

Frankly, I'm just glad to be out of this nonsense.

Lets just see how we open tomorrow morning.
-
back at the close.
Posted by Trading Sunset at 19:51:00
Email ThisBlogThis!Share to TwitterShare to FacebookShare to Pinterest

Market has managed to merely trade sideways, whilst the very small 5/15min cycles are reset. There is viable upside into the close, although the hourly index charts are a little on the high side still. Daily charts are very supportive of sp'1670s within the next few days. 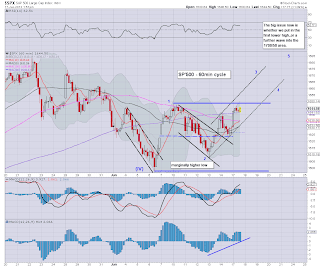 Its hard to call how today will close. There is a small chance of little wave lower, but the weakness is much less than last Friday.

--
*I am largely on the sidelines now, merely holding a small SLV (short) block, but looking to drop that on any further down move.

I'll pick up a new index-long block, but...not right now. There is no hurry, not least whilst the hourly MACD cycle is this high.


2.12pm...minor snap on the indexes..kinda interesting. Does nothing to dent the primary upwrad trend though. 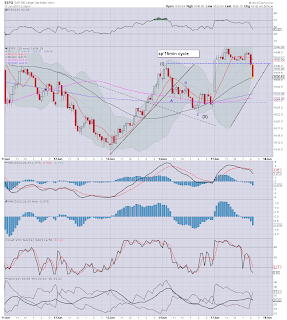 2.38pm.. clown channel'  it would seem an FT blog post has become a market mover event, on the notion that QE tapering will occur.

Hourly charts ARE rolling over, and that is a problem for early Tuesday.
Posted by Trading Sunset at 18:53:00
Email ThisBlogThis!Share to TwitterShare to FacebookShare to Pinterest

The market is holding the gains very well, and a move to the inv. H/S target of 1670/75 looks viable as early as tomorrow. Daily charts are especially bullish for Wed/Thursday, so the bears have a major problem for some considerable time to come. 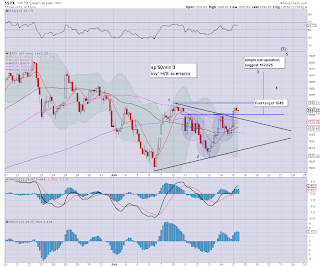 What will be interesting to watch, is if WTIC Oil breaks $100.  Very simple upside to 110/115 within the following 3-5 weeks.
--
Posted by Trading Sunset at 17:52:00
Email ThisBlogThis!Share to TwitterShare to FacebookShare to Pinterest

Market has maxed out at sp'1646, and we're seeing a very natural minor down cycle. Underlying pressure remains to the upside, but there is no reason why 1636/34 can't be hit this afternoon. VIX remains relatively strong, just -1.5%. 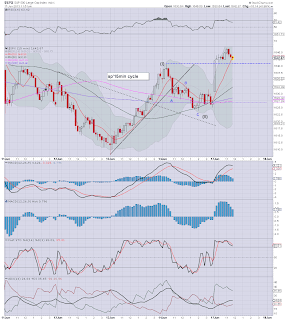 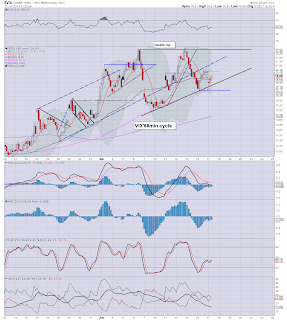 Well, market is still behaving itself...although the volume is low of course. Who wants to be trading ahead of the Fed?

Still short SLV..would like to drop that near the close of today.
-


Posted by Trading Sunset at 16:53:00
Email ThisBlogThis!Share to TwitterShare to FacebookShare to Pinterest

11am update - minor down cycle due

The market has seen some good gains to start the week, but we're due a little wave lower again. A possible interesting tell is the VIX, which has only been down 4% at the lows. There is certainly a little edginess out there, ahead of the FOMC. 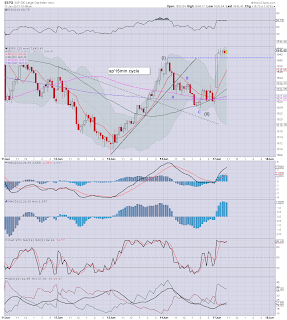 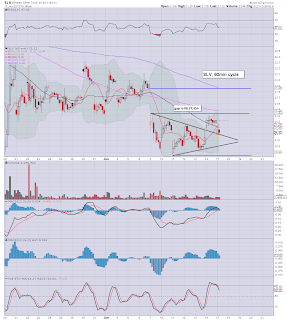 *Ohh, and even though I think the indexes will cycle downward in the next few hours, I sure won't be shorting them. Crazy high risk..against the daily trend which is indeed UP !

Underlying 5/15min cycles are way high, for the day-traders, this is surely 'get outta there' time.


Mid'1630s will be tempting..if we get there by 2/3pm.
Posted by Trading Sunset at 15:50:00
Email ThisBlogThis!Share to TwitterShare to FacebookShare to Pinterest

Sp' has already marginally taken out the Friday high. Underlying pressure - especially seen on daily charts, is swinging full back toward the bulls. Metals remains a touch weak, Oil looks set to test the big $100 later this week. 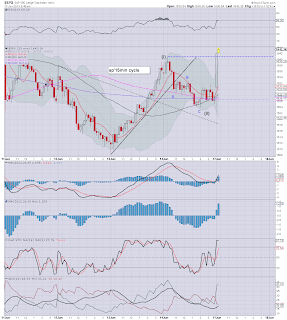 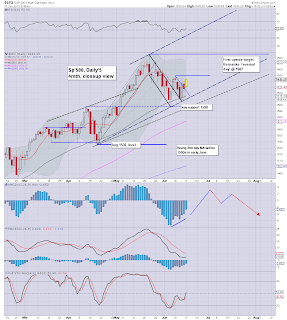 *I bailed on a small index-long block at the open, will pick up again later, on the next minor down cycle.

--
So, we've opened higher, and with the daily charts looking strong, the bulls are back in control.

There is significant chance of minor pull bull during today, but that merely makes for another long-entry opportunity.
-

There now seems little doubt this market is going higher into mid-July.
-

SLV, silver looks weak, and set to fall into the afternoon..


10.36am.. interesting that despite the equity gains..the VIX is only -2/3%. Probably due to the looming FOMC.
Posted by Trading Sunset at 14:49:00
Email ThisBlogThis!Share to TwitterShare to FacebookShare to Pinterest

Good morning. Futures are reasonably higher, sp +11pts, we're set to open at 1637. Metals are moderately lower, whilst Oil is +0.25%. It would seem likely we'll break the 1640 peak today, and make a challenge of 1648, no later than the latter half of Tuesday. 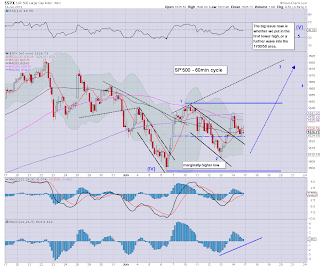 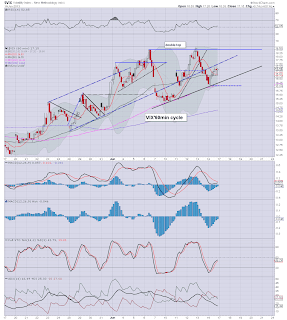 Well, those bears seeking follow through after Fridays lower close will be highly annoyed at this mornings likely open.

The smaller 15/60min cycles offer good upside into late morning, and we'll likely be trading >1640 by 11am in my view.

*very large QE-pomo today of 5-6bn, so there should be underlying pressure to the upside across the entire day.
--

I am currently long the indexes, and MRO...and short SLV.

So far..everything is set to go my way to begin the week.
--

Good wishes for the trading week ahead!