Volatility ends the week on a downer

With the main indexes melting back higher across Friday, the VIX naturally responded by slipping lower. The VIX closed -6.9%, settling @ 14.17. This was the highest weekly close since late December. 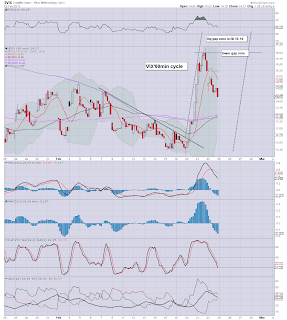 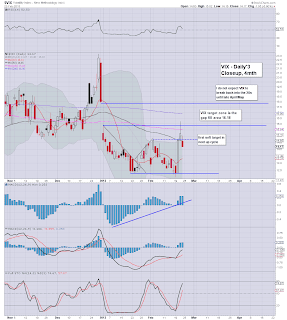 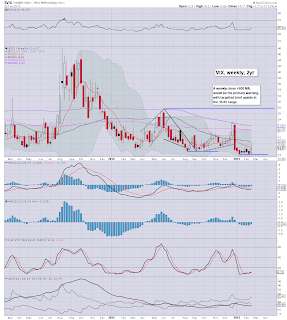 Whether the market can see a further equity wave lower next week, to around sp'1490/80 - with VIX 17/18s, that is now the minor curiosity.

I say curiosity, since the broader picture is absolutely still bullish, not least whilst the Feds POMO program continues.

A little more later..on the indexes.
Posted by Trading Sunset at 23:00:00
Email ThisBlogThis!Share to TwitterShare to FacebookShare to Pinterest

A pretty lousy end to the week for the bears, with most indexes closing moderately higher. We're a mere 1% away from the recent index highs. It has to be said, that anyone touting significant declines (<sp'1470) in the immediate term are out of their minds. 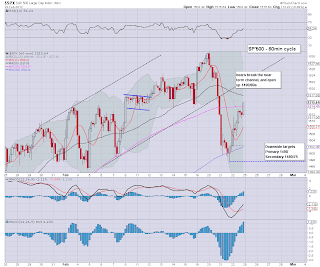 It looks like the few hours of intra-day churn was merely about forming a baby bull flag..and that was confirmed to some extent in the closing hour.

Baring a move under the Thursday low of 1497, the trend is clearly back on the bullish side.
--

Next week will be all about the Bernanke.. If he is careful with his words, Mr Market should merely continue to melt higher. At worse..a brief decline to 1490/80.......and then 1550s..if not considerably higher.
--

No hope of major declines until May, and even then..just how the hell are we going to decline whilst POMO continues?
--

*next main post..late Saturday, probably on the US weekly cycles (again!).
Posted by Trading Sunset at 21:01:00
Email ThisBlogThis!Share to TwitterShare to FacebookShare to Pinterest

One hour left of another crazy week. Lets not overlook that we made new highs on Tuesday, and broadly speaking, the primary trend remains higher. VIX has shown some power, but even a bounce into the 17/18s would do very little to negate what has happened since the New Years Eve reversal. 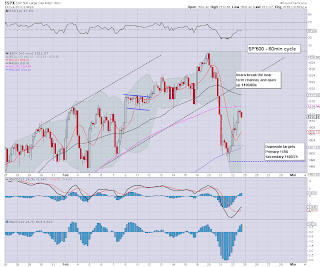 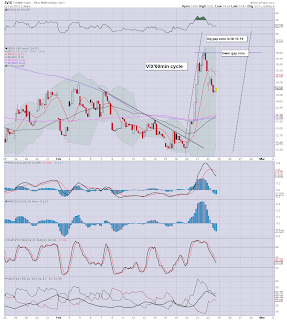 Hourly cycles offering very vague signs that this latest bounce is about done. A flat close just looks out of range, so, we'll be closing the week on an upward note.

Those bears still out there, had better hope Monday is a down day.

What remains absolutely clear, a move under sp'1480 looks...impossible at this stage.

--
back at the close.
Posted by Trading Sunset at 19:52:00
Email ThisBlogThis!Share to TwitterShare to FacebookShare to Pinterest

The market remains comfortably holding its moderate morning gains. Laughably, we're a mere 1.2% from the Tuesday high. Pull backs remain brief...and completely unreliable. Its been another lousy week, and it doesn't look like there is any chance of closing the day flat. 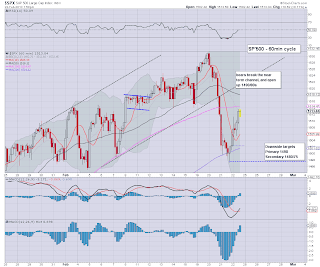 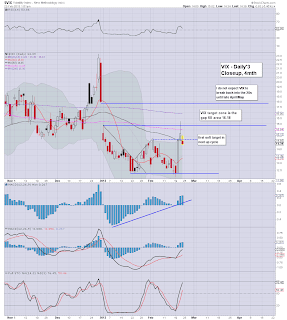 Another annoying day, and it really taints the somewhat impulsive 2 day decline.

Bears should fear the Bernanke next week. Any talk of 'ohh yeah, recession, we'll just increase the print rate'..and market will soar.

Metals... remain weak, but the steep downtrend is starting to lessen, and a bounce looks likely by end of next week. 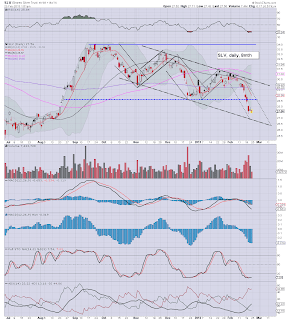 As ever, the only issue is whether the bounce merely forms yet another lower high.

back at 3pm
Posted by Trading Sunset at 18:54:00
Email ThisBlogThis!Share to TwitterShare to FacebookShare to Pinterest

12pm update - you get nothing!

The opening index gains are holding. Certainly, its not turning out to be a bear massacre yet, but its a lousy end to the week. Dollar is a touch higher, metals slipping lower again, as is the VIX. Anyone who is seeking a break <sp'1480...go steel a fizzy lifting drink. 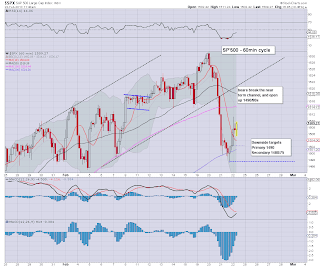 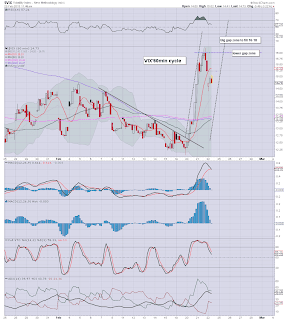 Once again, there is nothing good in market land for the bears.

Next week will be all about what the Bernanke has to say, and if the clown media - and market, want to interpret the Chairman's words as bullish, then this market will be massively higher.

A two day decline..perhaps that was indeed the 'correction'.

I will vainly 'hope' for a renewed minor decline early next Mon/Tuesday.  Yeah, its back to the 'hope' strategy again.

Good day.
Posted by Trading Sunset at 16:51:00
Email ThisBlogThis!Share to TwitterShare to FacebookShare to Pinterest

So much for the two day decline. Market is already up 8pts to sp'1510. Unless this rally fails later today, its going to be a truly dire end to the week for the bears. Absolutely annoying as hell. Dollar is flat, metals a touch weak, and the VIX is already 5% lower. 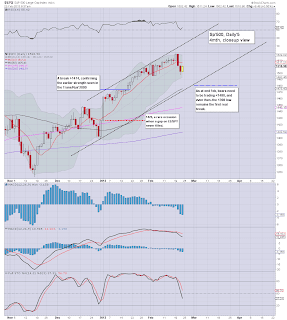 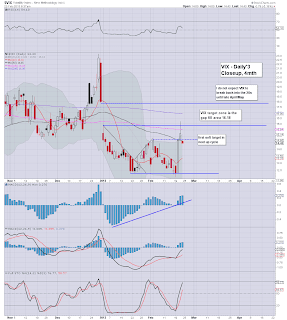 There has been so much doomer talk in the last two days, and yet here we are again, a mere 20pts from the recent highs, and it won't take much of a news story to ramp this nonsense right back to the Tuesday levels.

VIX is already -5%, if we can't close at least moderately green, then once again, its all been a  complete waste of time.

Just how are we going to get consistant declines whilst the POMO $ are flooding this market?

Ohh, thats right, no one out there has an answer to that question..because there is NO answer.

Bears...in complete denial.
Posted by Trading Sunset at 14:41:00
Email ThisBlogThis!Share to TwitterShare to FacebookShare to Pinterest

Strong Dollar..pressuring the US markets

Whilst the indexes managed their second consecutive decline, perhaps more importantly the USD climbed again, and briefly broke the highs from mid-November.  If the USD can get a weekly close above 81.50, it bodes badly for the bulls next week. 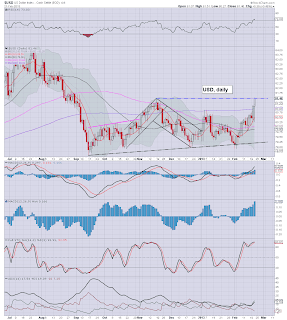 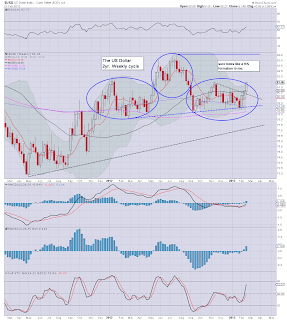 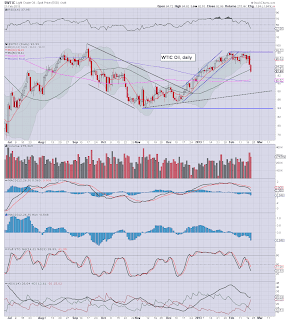 I've seen a fair few chartists today highlight the Euro, breaking trend support. Suffice to say, I don't think it will go much lower in the near term. Same goes for Mr Dollar, which today saw its first brief move >81.50. 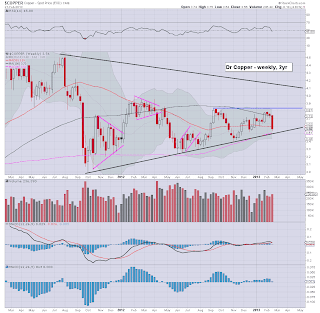 With the stronger dollar, its not surprising to see downward moves in most commodities, and Copper is no exception. What is interesting is that its now very close to breaking the lower wedge/rising support line. Any close in the 3.40s - whether tomorrow or next week, would be somewhat suggestive that something new is underway, rather than just a tiny pull back.

Those considering 'dip buying' should keep a very close eye on whether Copper holds above that line. 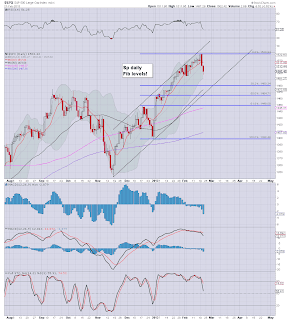 I'm guessing this is merely a sub wave'4 of the very large wave that began in mid November.

If that is the case, we'll get stuck somewhere between 1490/1475 within the next few days..and then jump higher..breaking new highs in March.

I have the small hope that by late April, it will be prime shopping time for a major re-short, with some serious downside action in May.

The US market closed lower for the second consecutive day, although the declines were only moderate. The SP' slipped 0.6% lower, but clawed back higher to hold the big 1500 level. Near term trend looks moderately weak, target zone is 1490/80, with VIX 17s 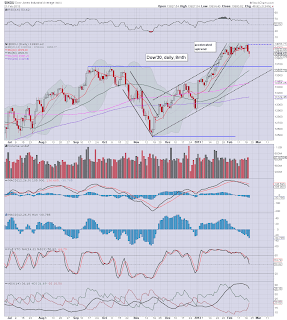 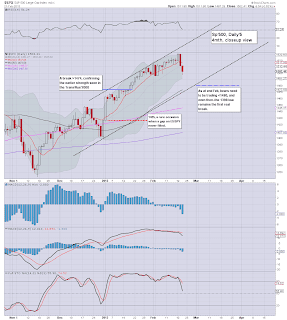 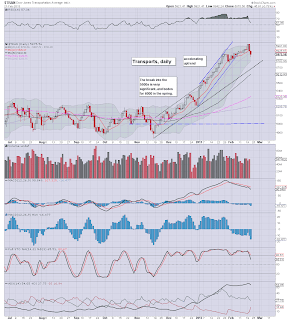 So, a second day lower...surprising?

Bears have been waiting for some weeks for a multi-day wave lower, and we're finally getting one. How many more days to go?

I would be very surprised if we go much below 1480/75 - where there is VERY strong rising support seen clearly on the daily charts. My best guess is we'll be flooring no later than next Mon/Tuesday.

Considering the POMO, I would guess we'll still see further highs in March/April.