Despite continued minor weakness in US equities, the market remains unconcerned, with the VIX closing -1.6% @ 14.08. If the sp' can break back into the 1720s..and then make new highs in the 1730s..VIX in the 12s..even 11s looks a viable target low for October. 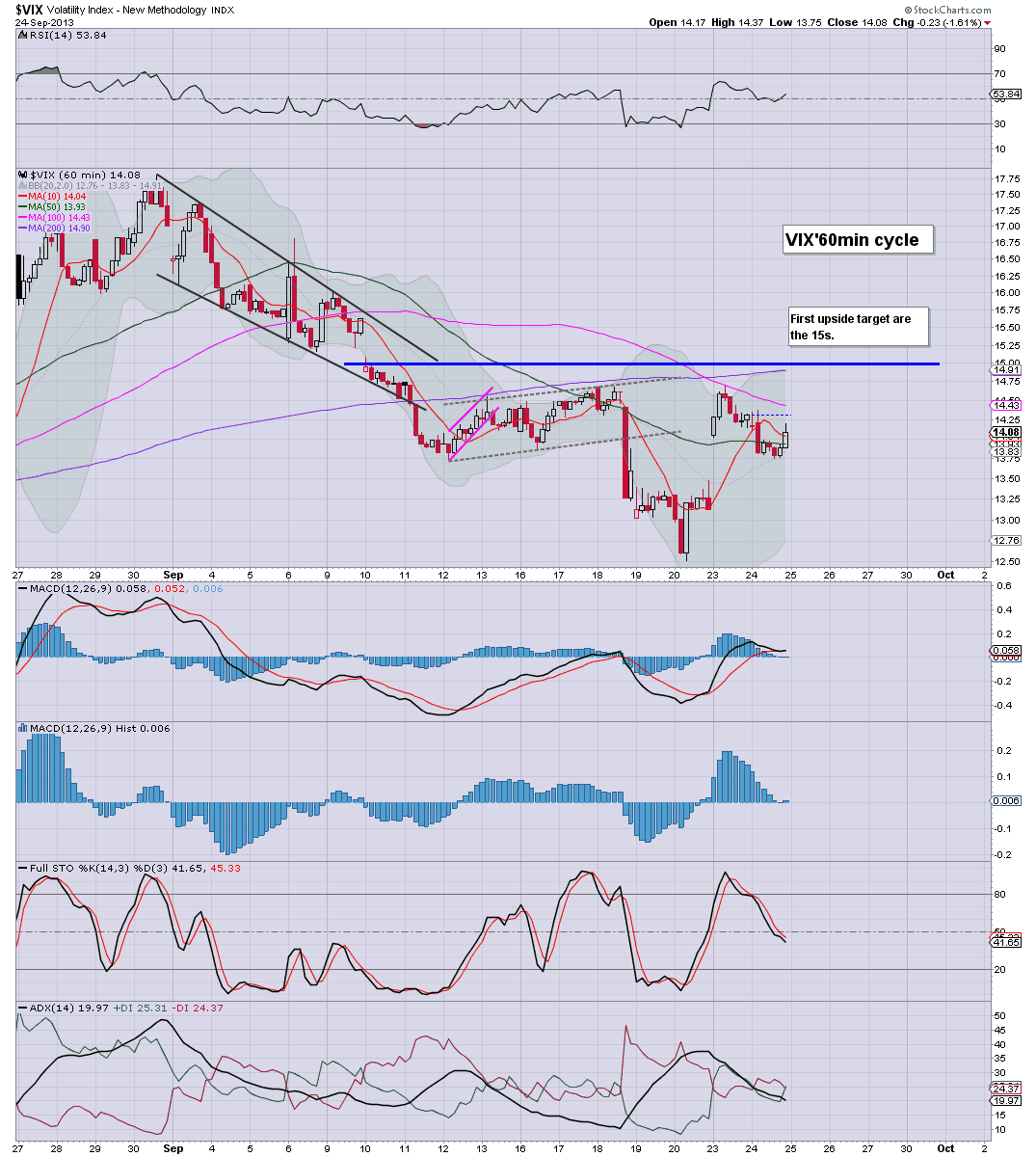 Yet again, perhaps the most bizarre aspect of another trading day - where there was certainly some weakness in US equities, is that the VIX again failed to close higher. The fact it was barely able to hold the 14s into the close is testament to the underlying fearlessness in this market.

I'm open to a further moderate wave lower, to the sp'1680s, but even if that happens, VIX will struggle just to get a daily close in the 15s. The notion of VIX in the high teens..never mind the 20s, is complete fantasy land for the bears right now.

Best guess, continued low volatility for the early autumn, and if sp'1730s..and higher, then VIX will probably slowly melt lower across October. 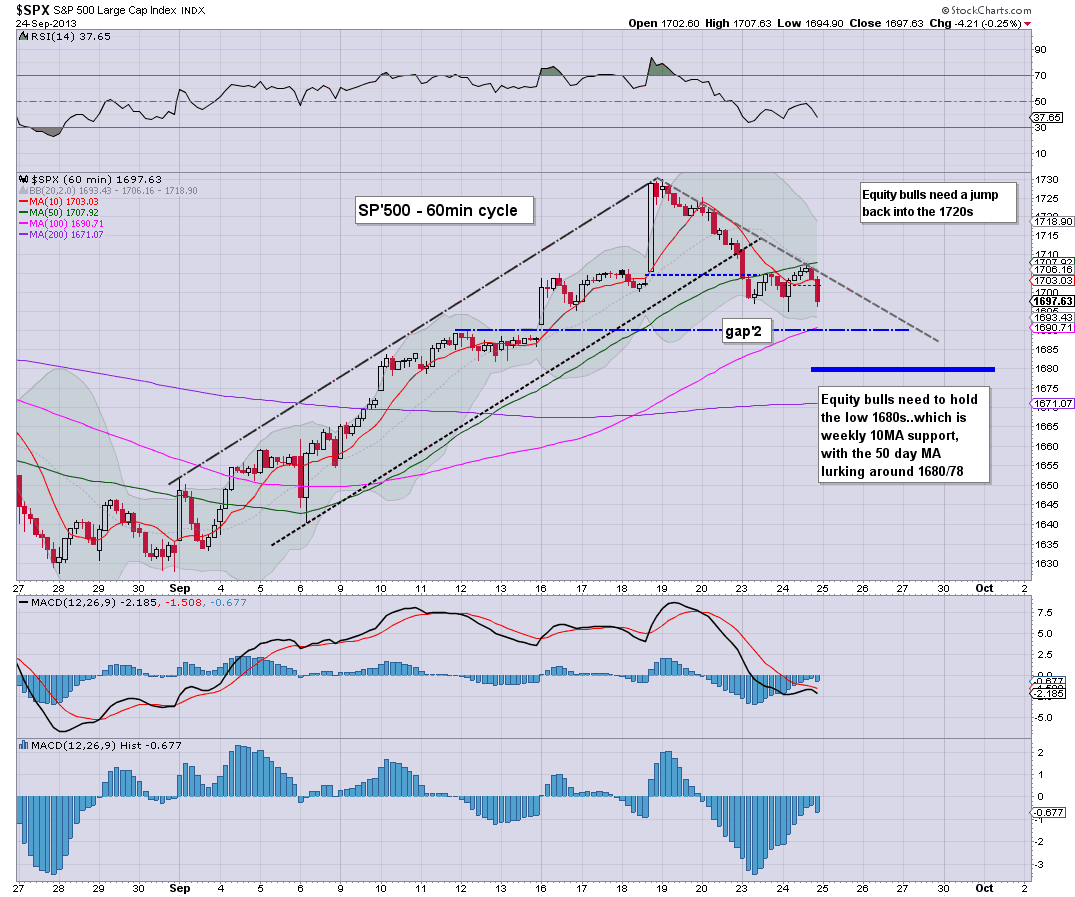 So, a disappointing end to the day for those seeking sp'1705 or higher.

Regardless, even if the low 1680s are hit tomorrow or Thursday, I have little concern. The bigger trend remains unquestionably higher. Anyone getting overly excited that we're now around 2% below the historic highs of last Wednesday, needs to go stare at a monthly index chart for a few hours.
--

The market is holding moderate gains on almost all the main indexes (Dow is fractionally red). Bulls should be content with any close >sp'1705, which should open up the 1725/35 zone.  Metals/Oil have both recovered earlier declines, with Gold now +0.3%, and Oil back to flat. 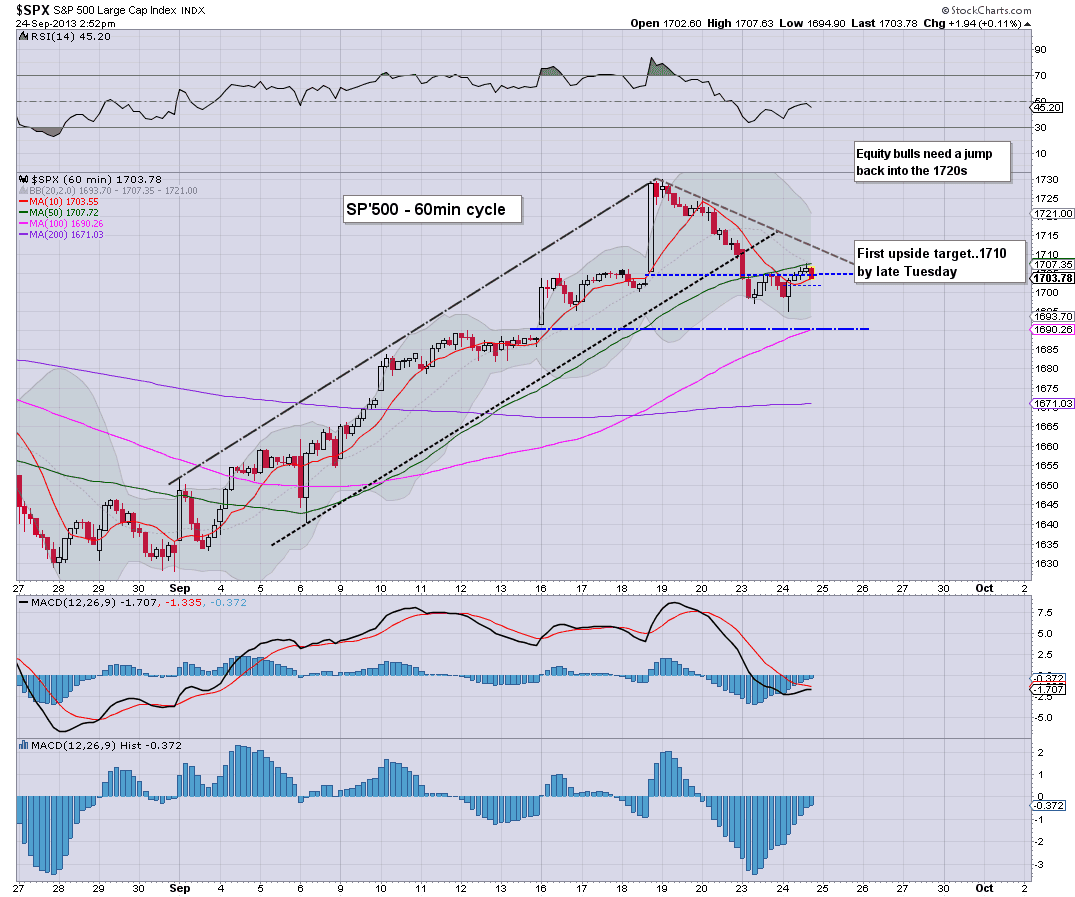 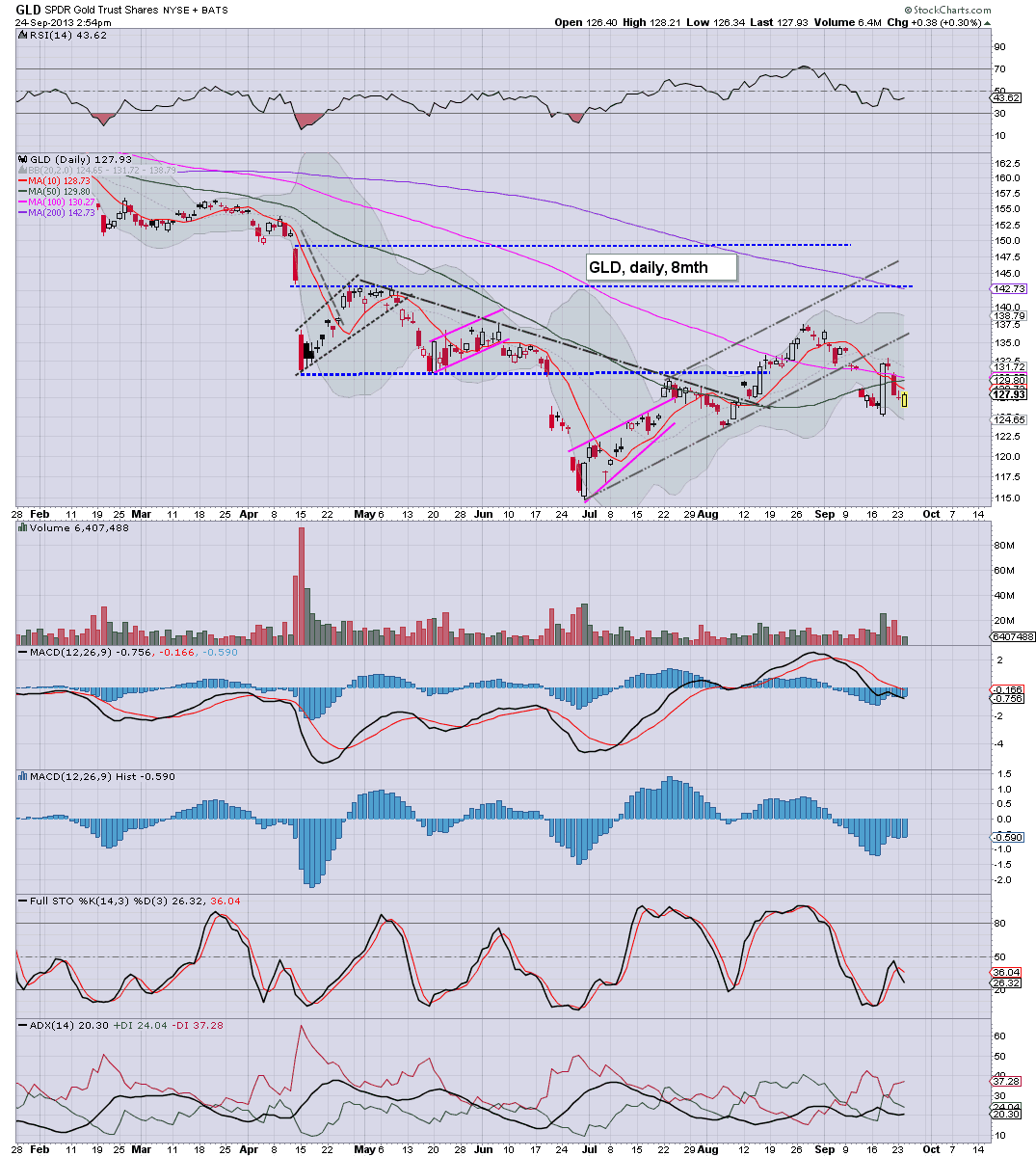 I realise some will be calling the recent price action as merely a large wave '2/B - bear flag, as seen on the hourly index charts.

Best bear case downside would be the low 1680s, but if we do get that low, it'd seriously weaken the bigger weekly up trend. I'm guessing not though.
--

If that is the case, target is 1680, where are another set of multiple supports.
Posted by Trading Sunset at 19:56:00
Email ThisBlogThis!Share to TwitterShare to FacebookShare to Pinterest

The main indexes are holding moderate gains..and building upon them. A close in the sp'1710s now looks very viable, and is further supported by the hourly cycle, which is set to offer a snap higher into the close. VIX is -3.7%, back in the 13s. 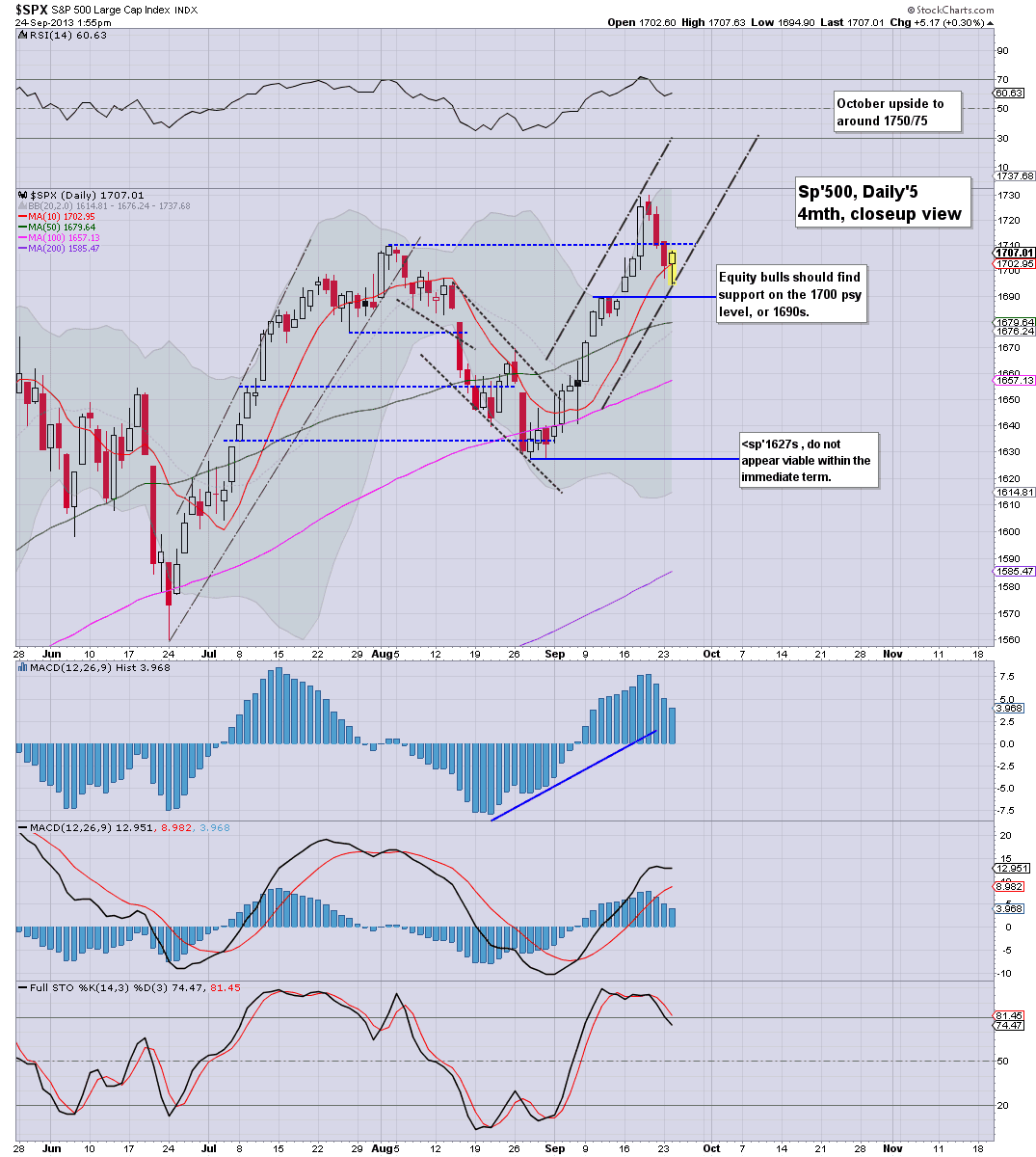 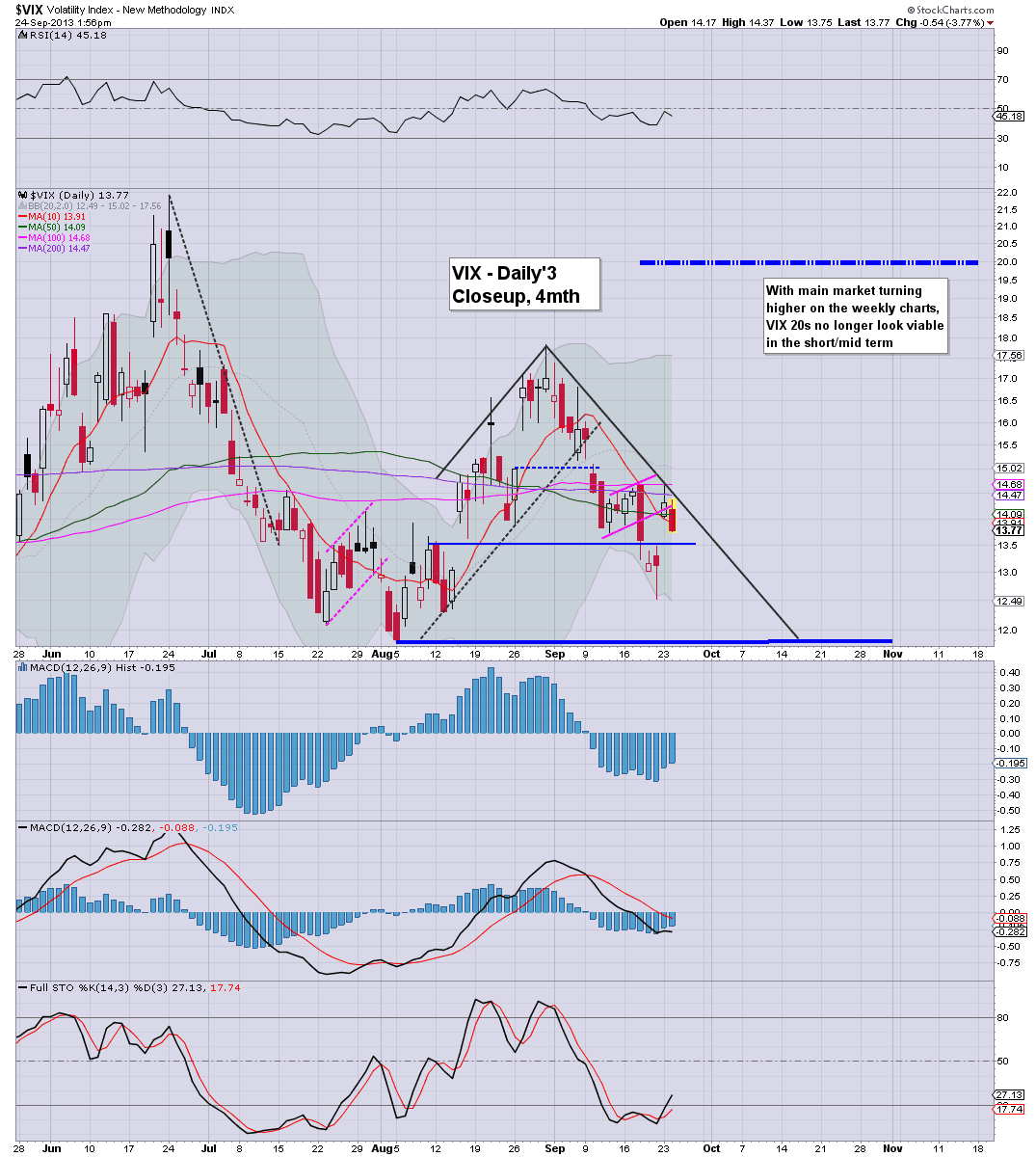 Bulls should be pretty confident for the rest of the week, if we close in the 1710s today.

From someone with a very bearish bias...I have to note, I simply sense no power on the bearish side...which has been largely the case for the entire year.

The hourly and daily charts are starting to offer a pretty clear turn to the upside. The bulls merely need a close >1705, that would suffice. With two major QEs (Wed/Friday), the bulls have a very significant chance of ending the week in the sp'1725/35 zone. 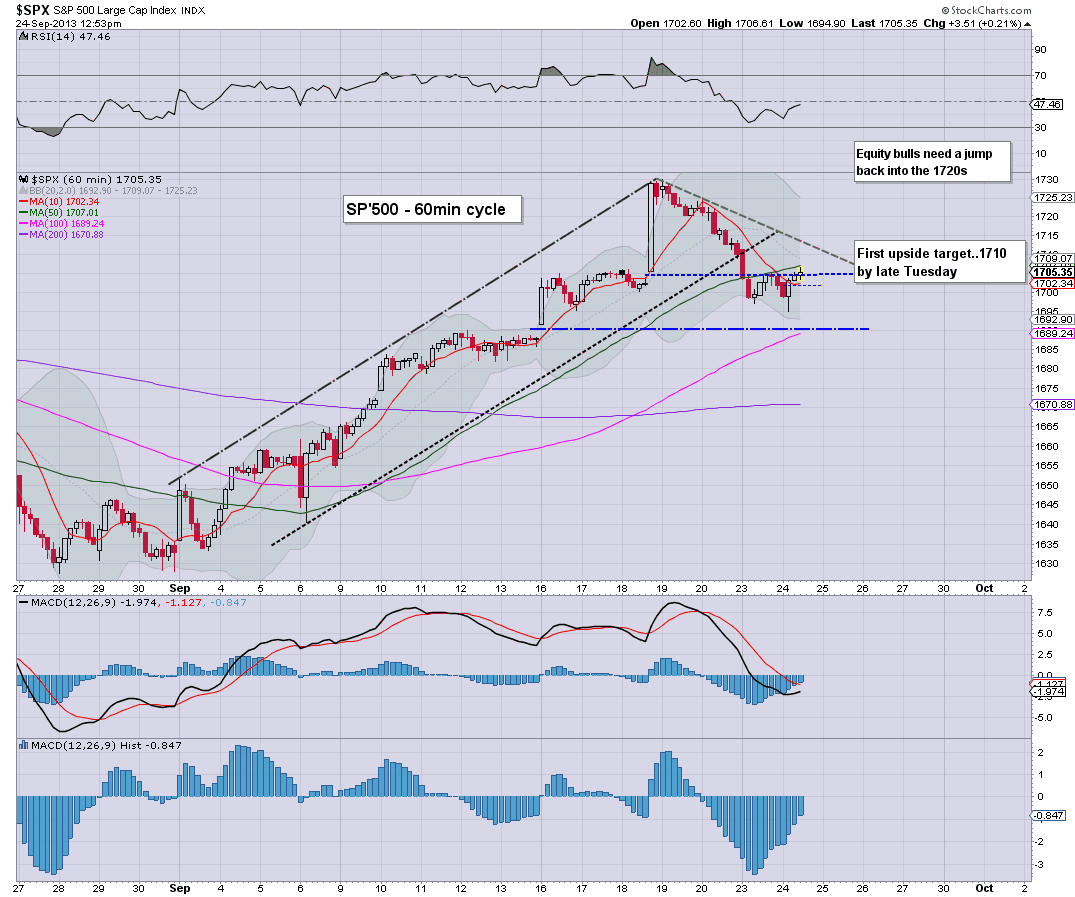 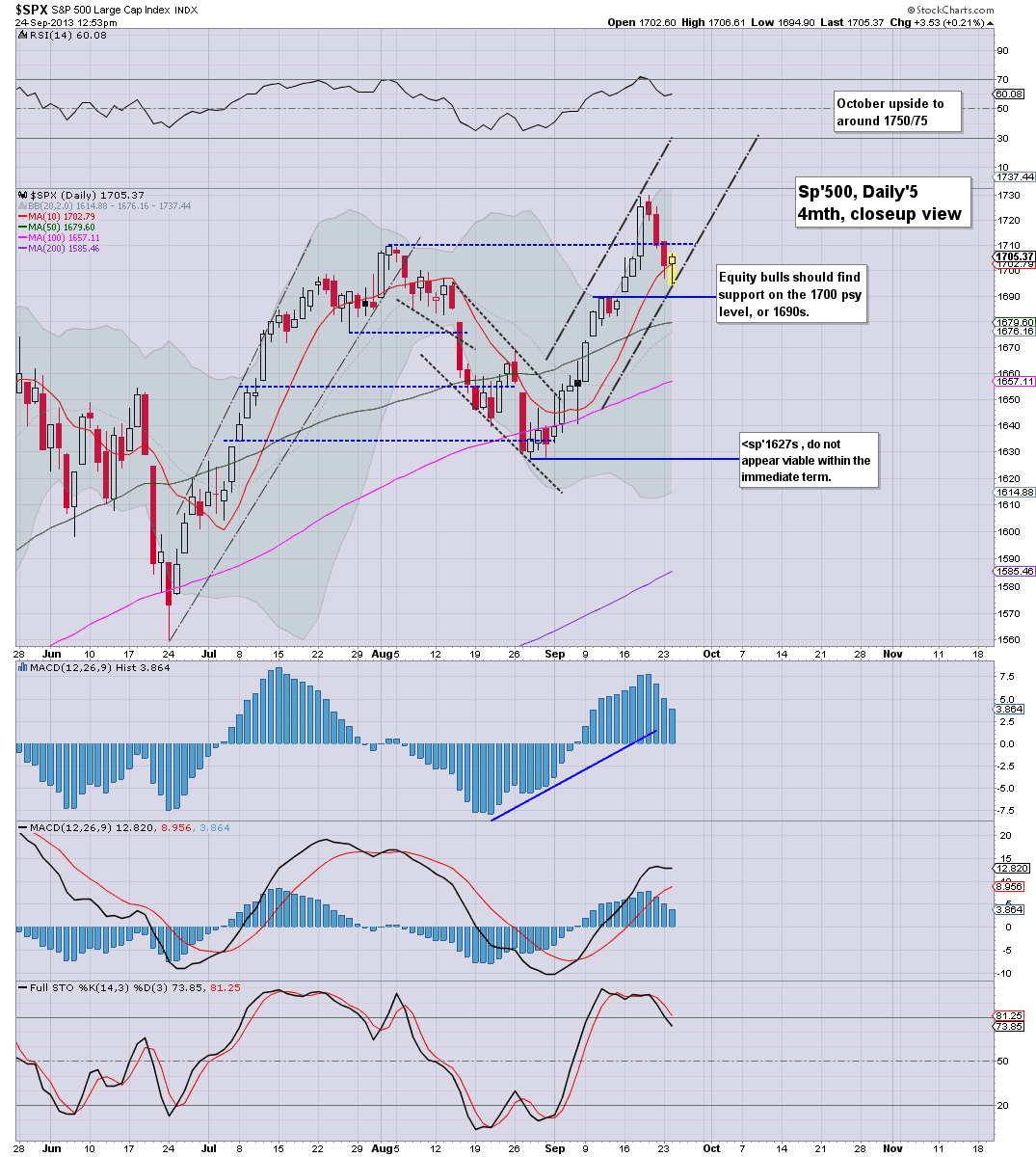 A long afternoon ahead, plenty of time to break >1710, although as noted, bulls should be content with any close >1705.
--
Posted by Trading Sunset at 17:55:00
Email ThisBlogThis!Share to TwitterShare to FacebookShare to Pinterest

The main indexes are battling hard to build minor gains, with the sp +2pts at 1704. The two leaders - Trans/R2K, are both around 0.4% higher, and price formation looks like a clear bull flag. If that is the case, market should jump higher across Wednesday. 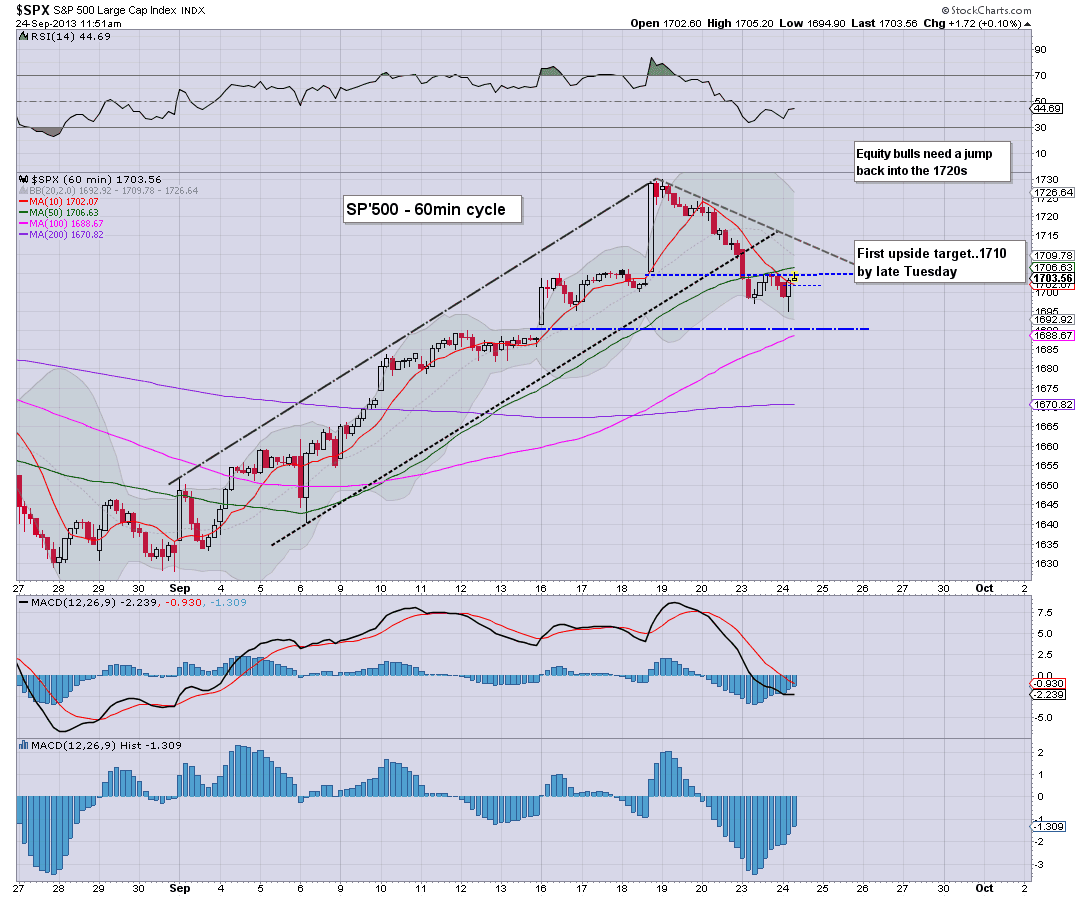 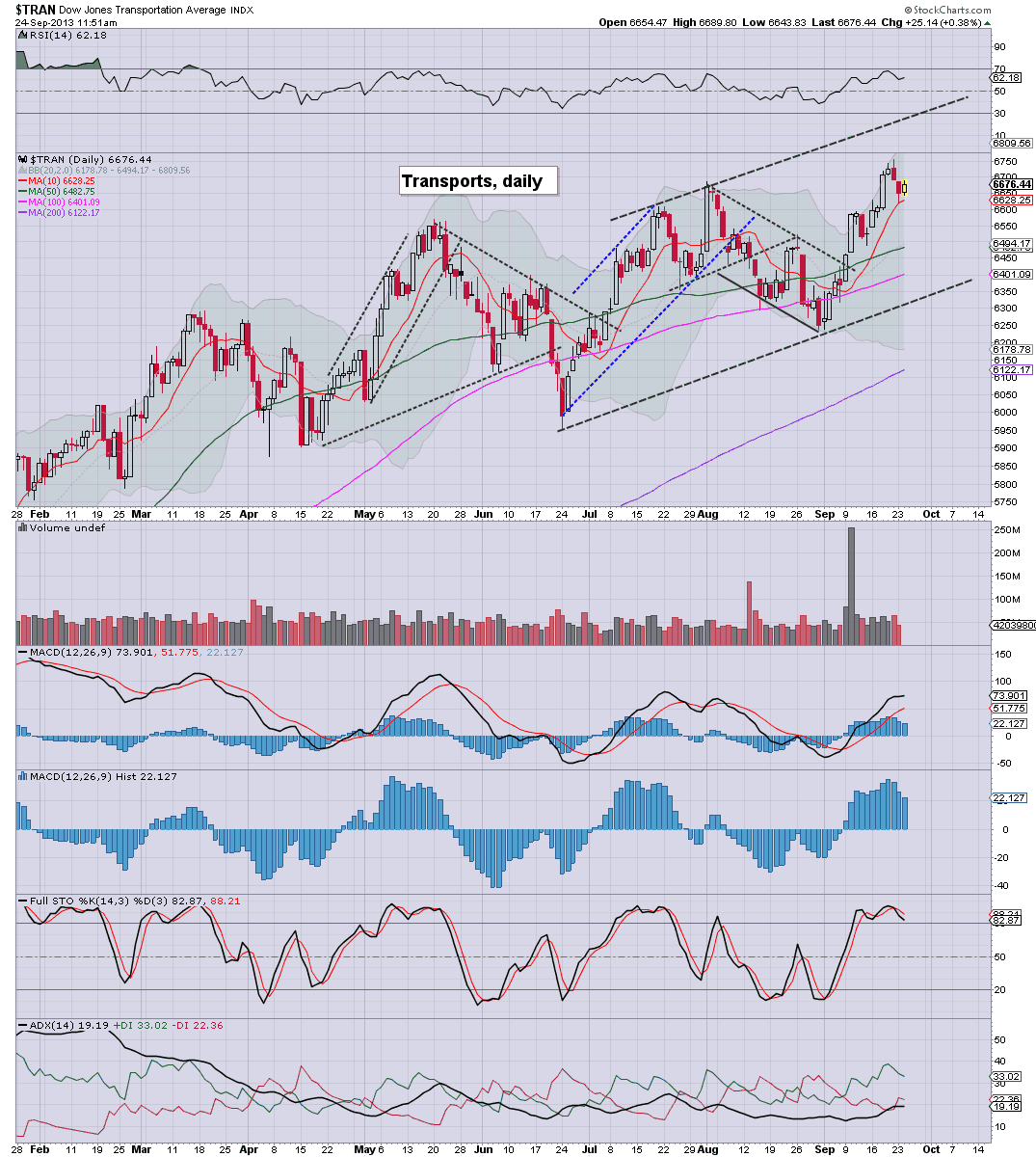 So, it remains very quiet out there, and based on all previous cycles, we're more likely to trend upward..than down.

*I notice a few there are open to a hit of the 50 day MA - currently 1679, and I will admit, that is still viable.For those not already long, that would simply make for an even better entry.
--

11am update - bears are weak

The market is trying to floor again, and indexes have a reasonable chance of a close in the sp'1710s. That would clarify the outlook for the rest of the week, and the sp'1730s will be back on the table. It remains largely quiet, and that will no doubt help the bulls. 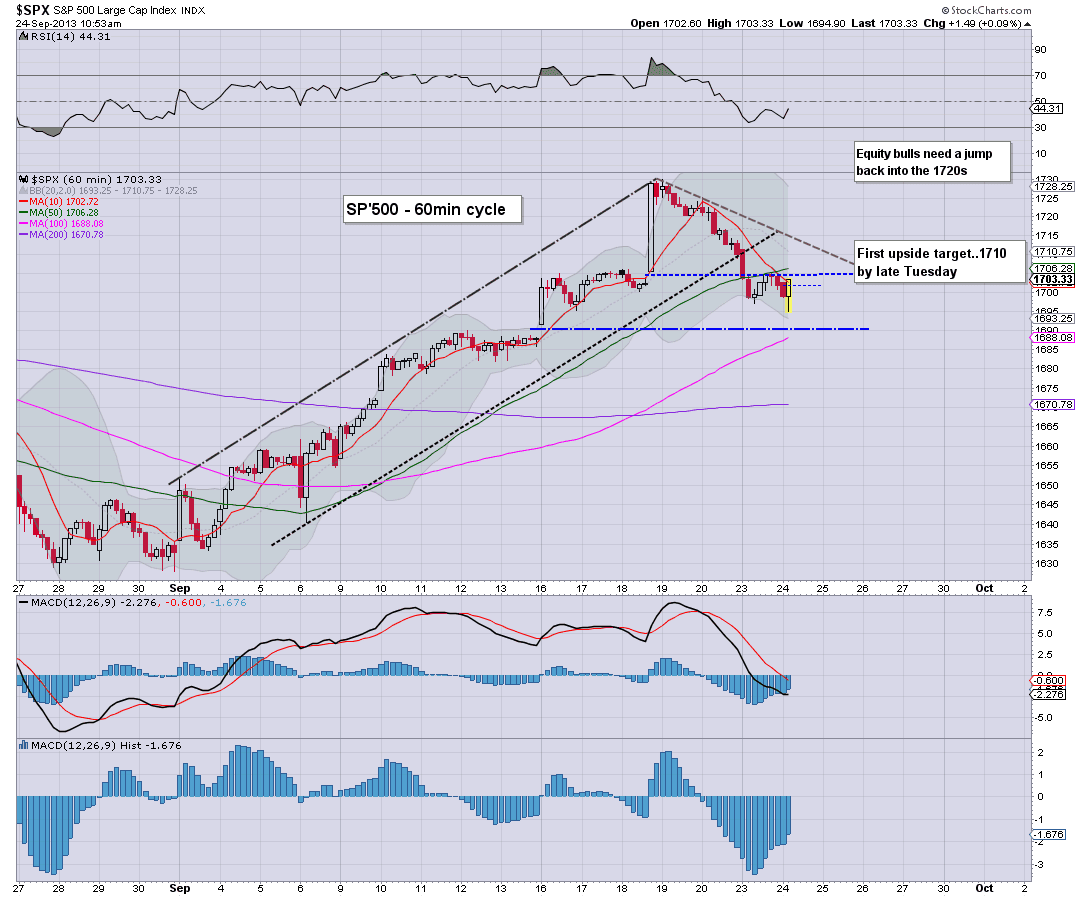 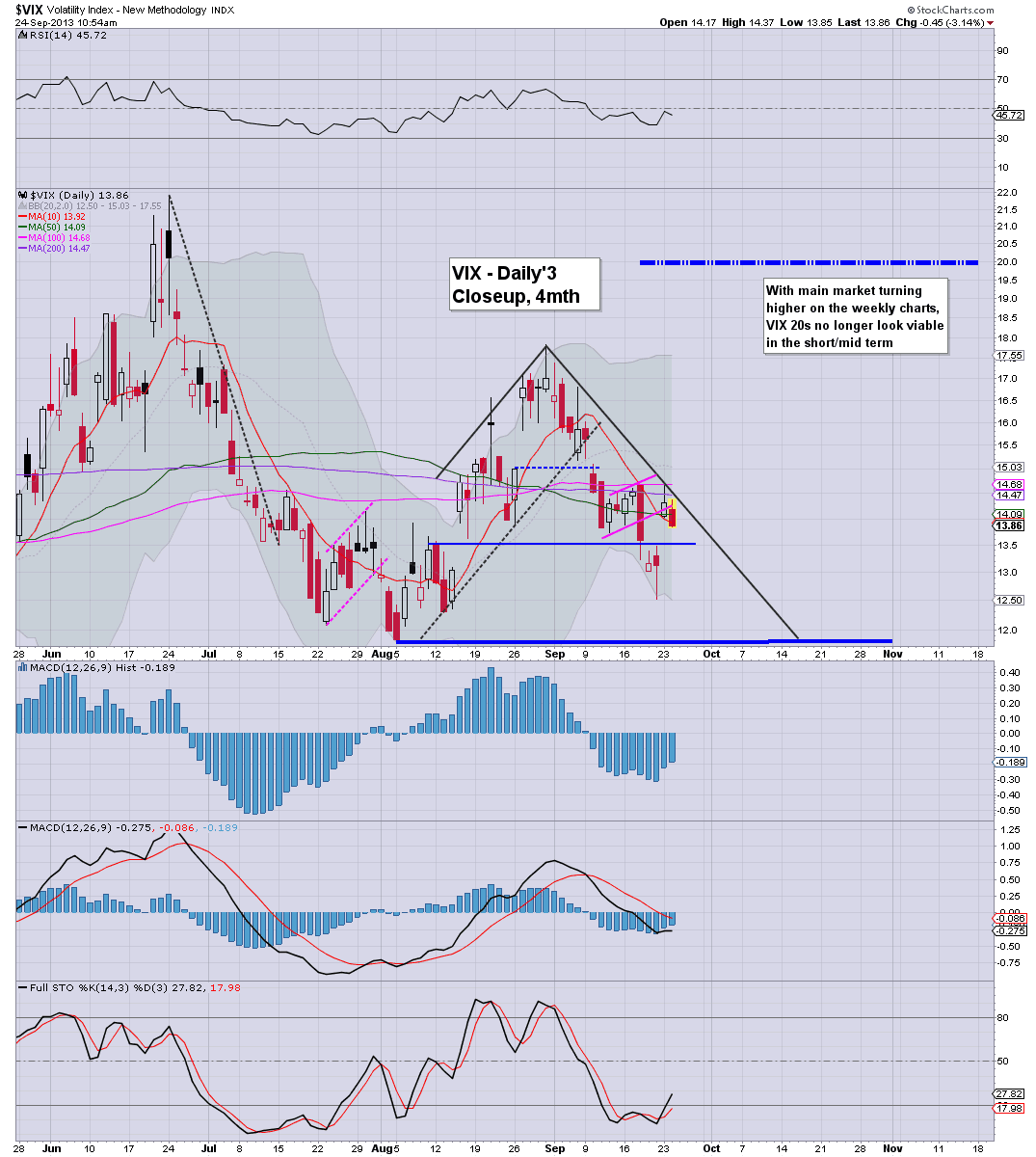 There really isn't much to add.

Same old nonsense, bears have little power on the downside, and its just a matter of when the bulls are able to muster the next up wave. 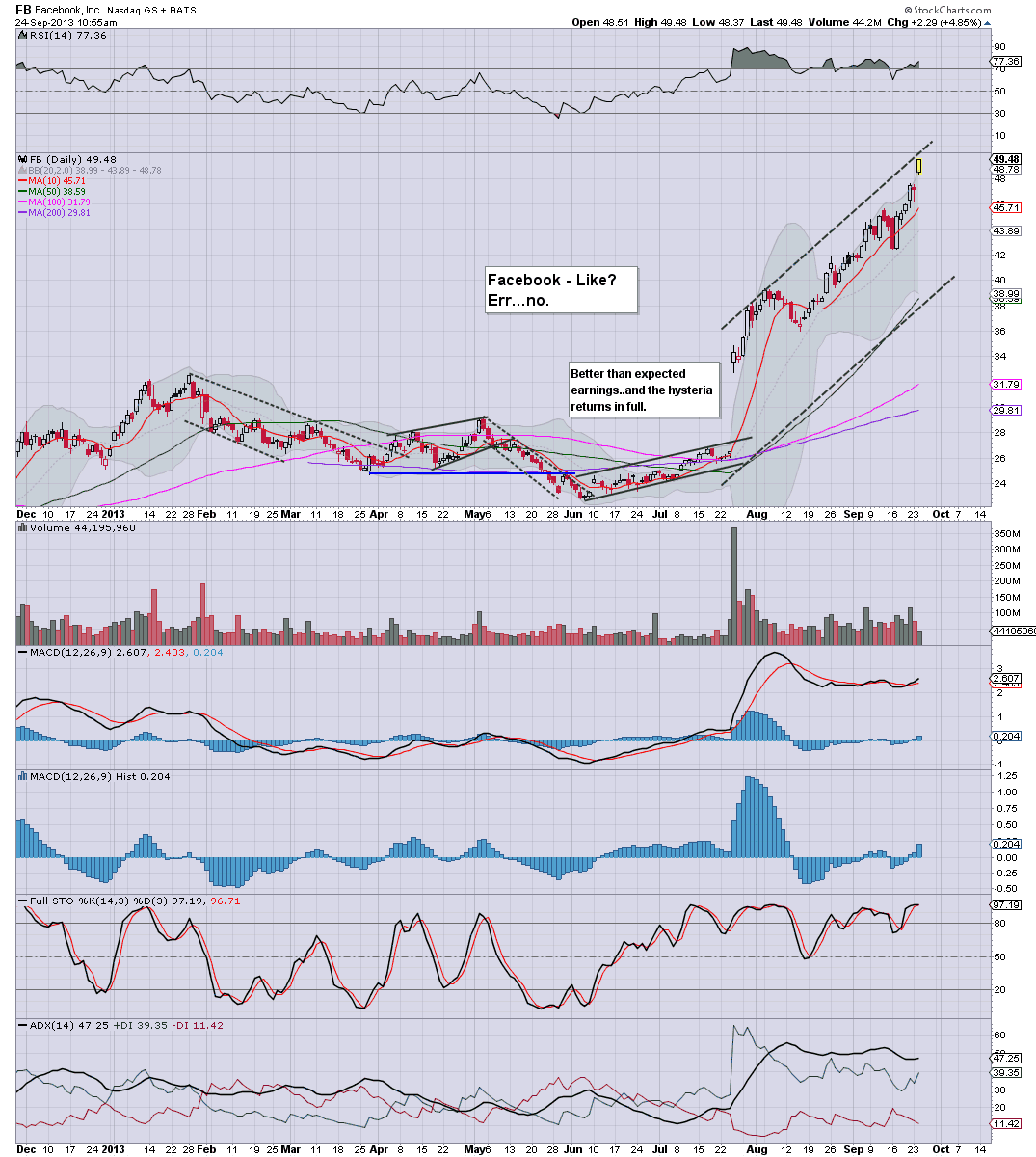 If the main market does hold together for a couple more years...FB will be in the hundreds. A disturbing thought...to be sure.
Posted by Trading Sunset at 15:55:00
Email ThisBlogThis!Share to TwitterShare to FacebookShare to Pinterest

10am update - even less downside power than yesterday

The main indexes open a touch lower, but the bears look even weaker than yesterday. Baring a sporadic news story, it is likely just a matter of when..not if, the market resumes the underlying upward trend. Despite a slightly weak market, VIX is fractionally lower. 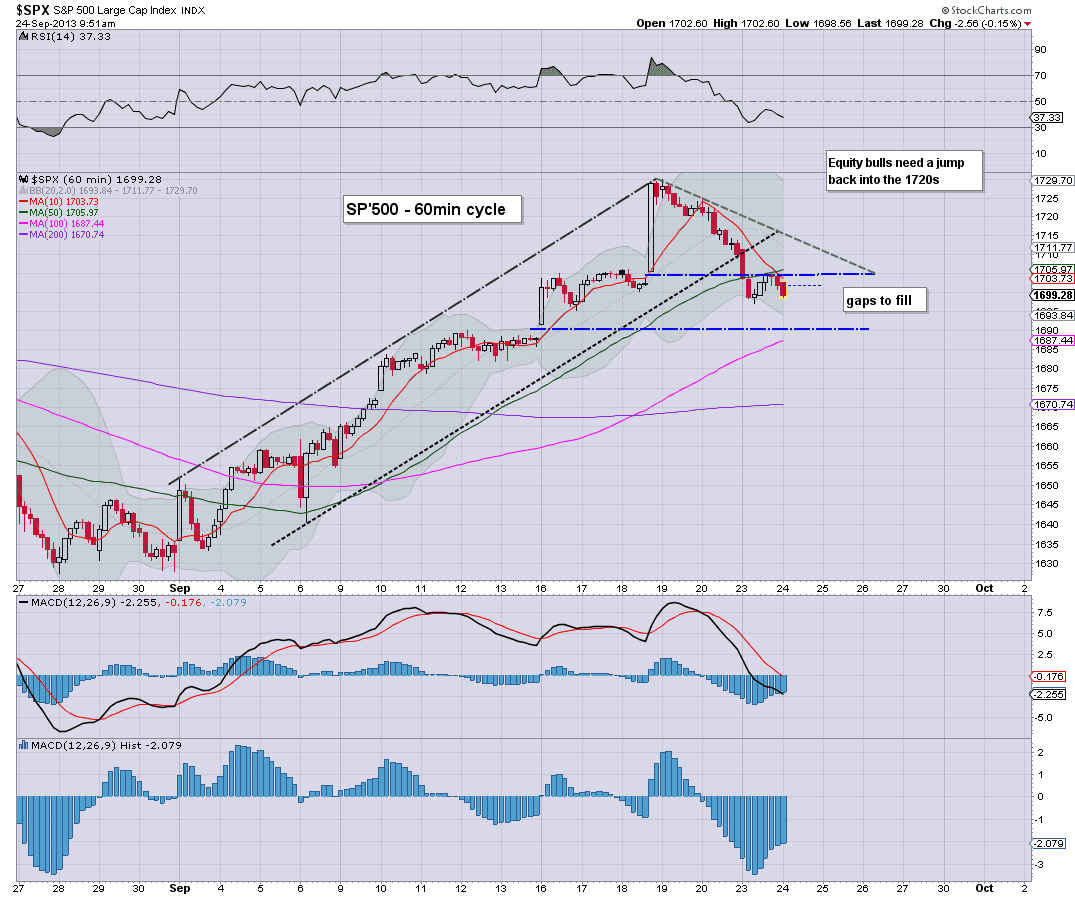 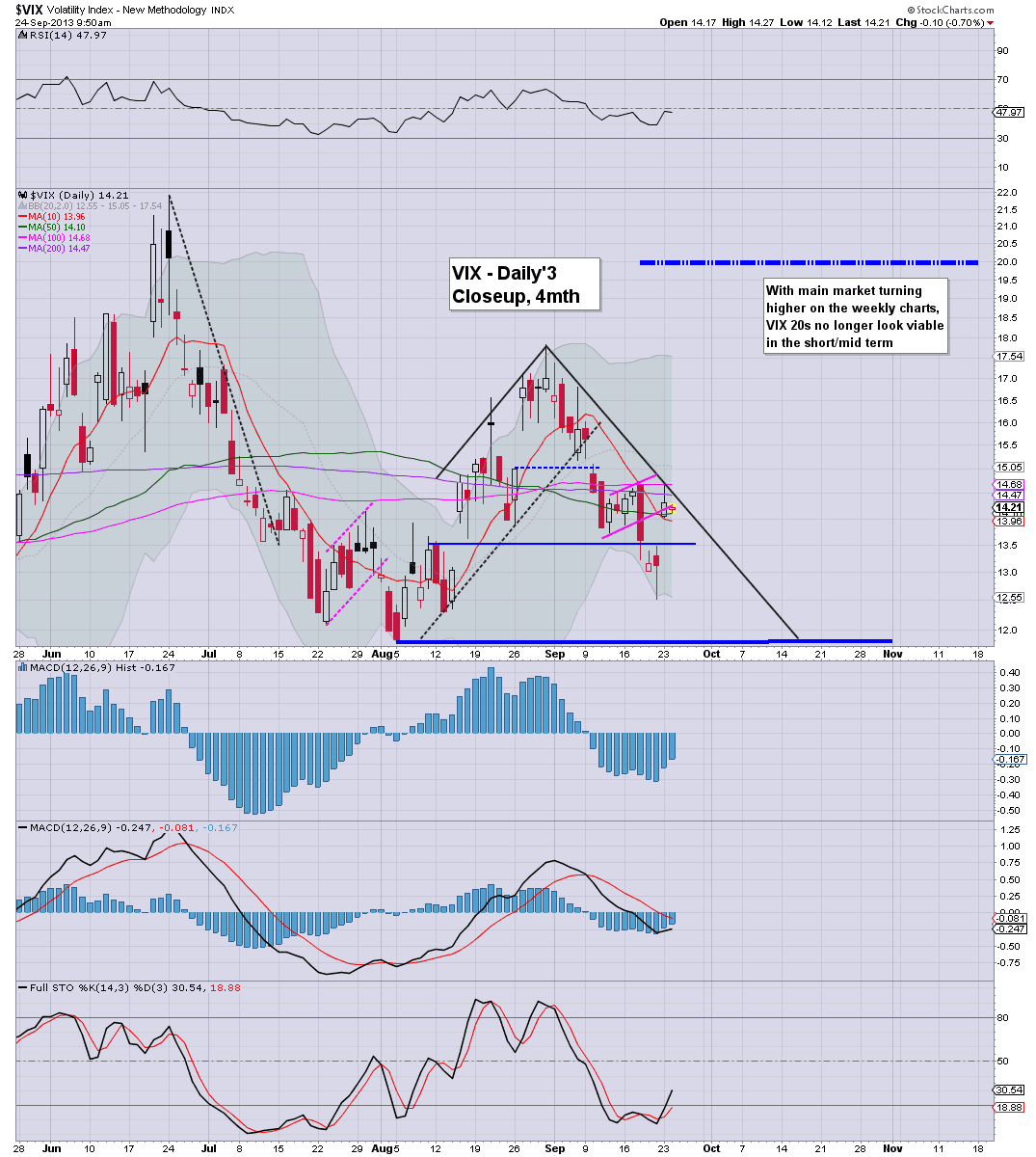 It doesn't look like we'll see much market action today, a day of nothing seemingly looms.
-

For those only interested in the bigger picture..its arguably a case of turn your screen off..and come back next Tuesday (Oct 1st).

*metals open lower, with Gold -$7. No doubt the gold bugs are still a bit rattled from last Fridays decline.
Posted by Trading Sunset at 14:55:00
Email ThisBlogThis!Share to TwitterShare to FacebookShare to Pinterest

Good morning. Futures are a touch lower, with sp -3pts, we're set to open around 1698. Gold and Oil are both lower by around 0.5%. Bears will be gunning for a fourth consecutive daily decline. Bulls need to at least hold the 1680s, or the weekly trends will have broken. 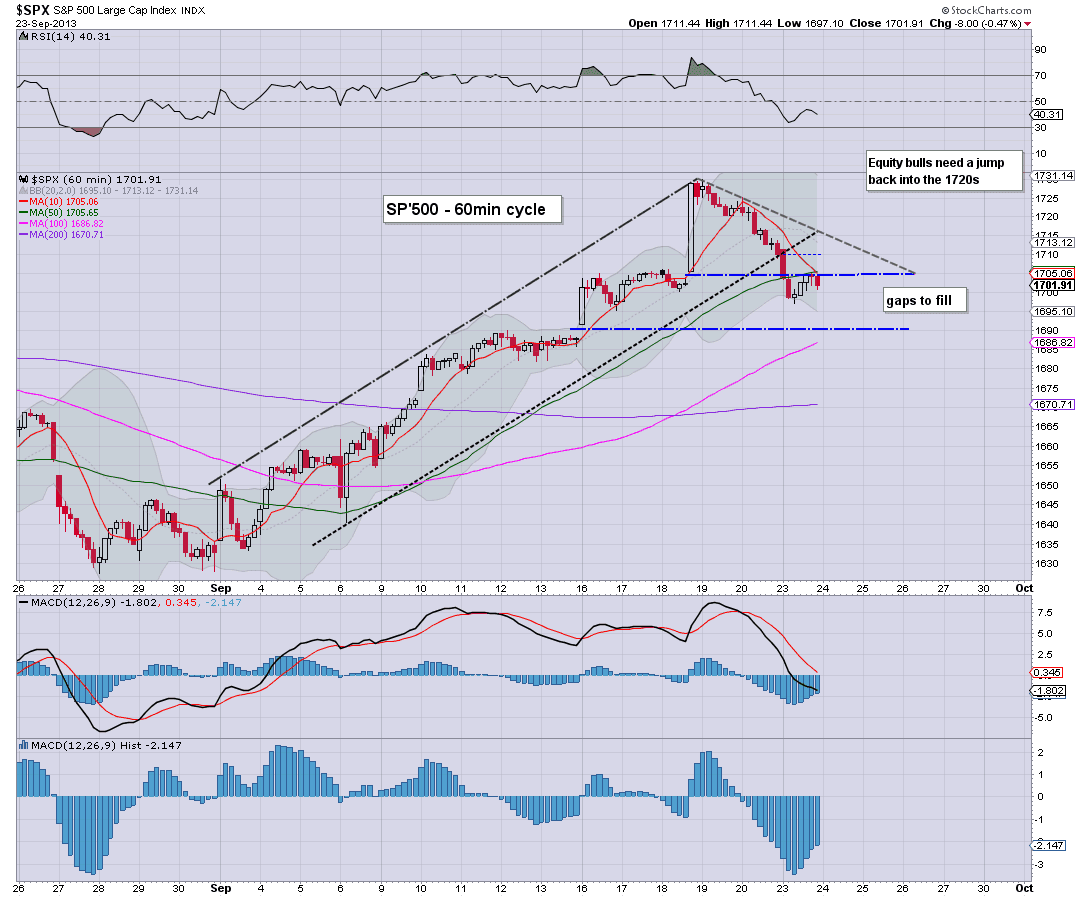 Hmm, certainly, another day where the bears are looking like they are leading the way. I realise some will again be getting overly excited at this, but really, unless the market is trading back in the 1670s, no one can argue the broader trend does not remain still upward.

So..lets see if the bears can get a fourth daily decline.

In particular, see if the daily 10MA can be closed under on the two leaders of Trans/R2K.
-

Update from Walker, on Gold and Oil

--
Posted by Trading Sunset at 13:35:00
Email ThisBlogThis!Share to TwitterShare to FacebookShare to Pinterest

How can the market fall with continuing QE ?

Whilst the main indexes closed a touch lower for the third consecutive day, the primary trend remains to the upside. With the Fed continuing to throw $85bn a month of new money at the US capital markets, how can anyone still tout 'a significant equity wave lower' in the short/mid term? 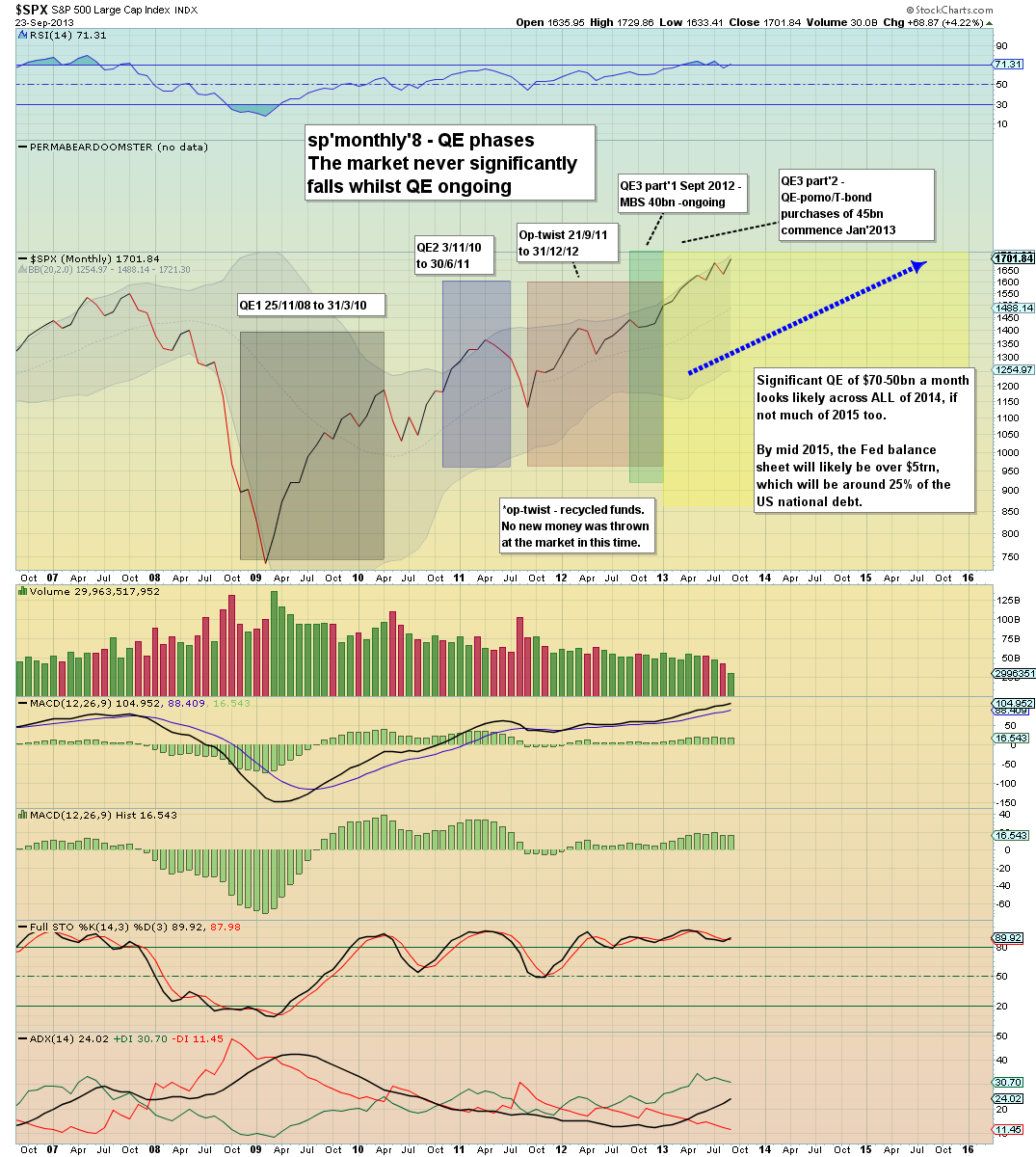 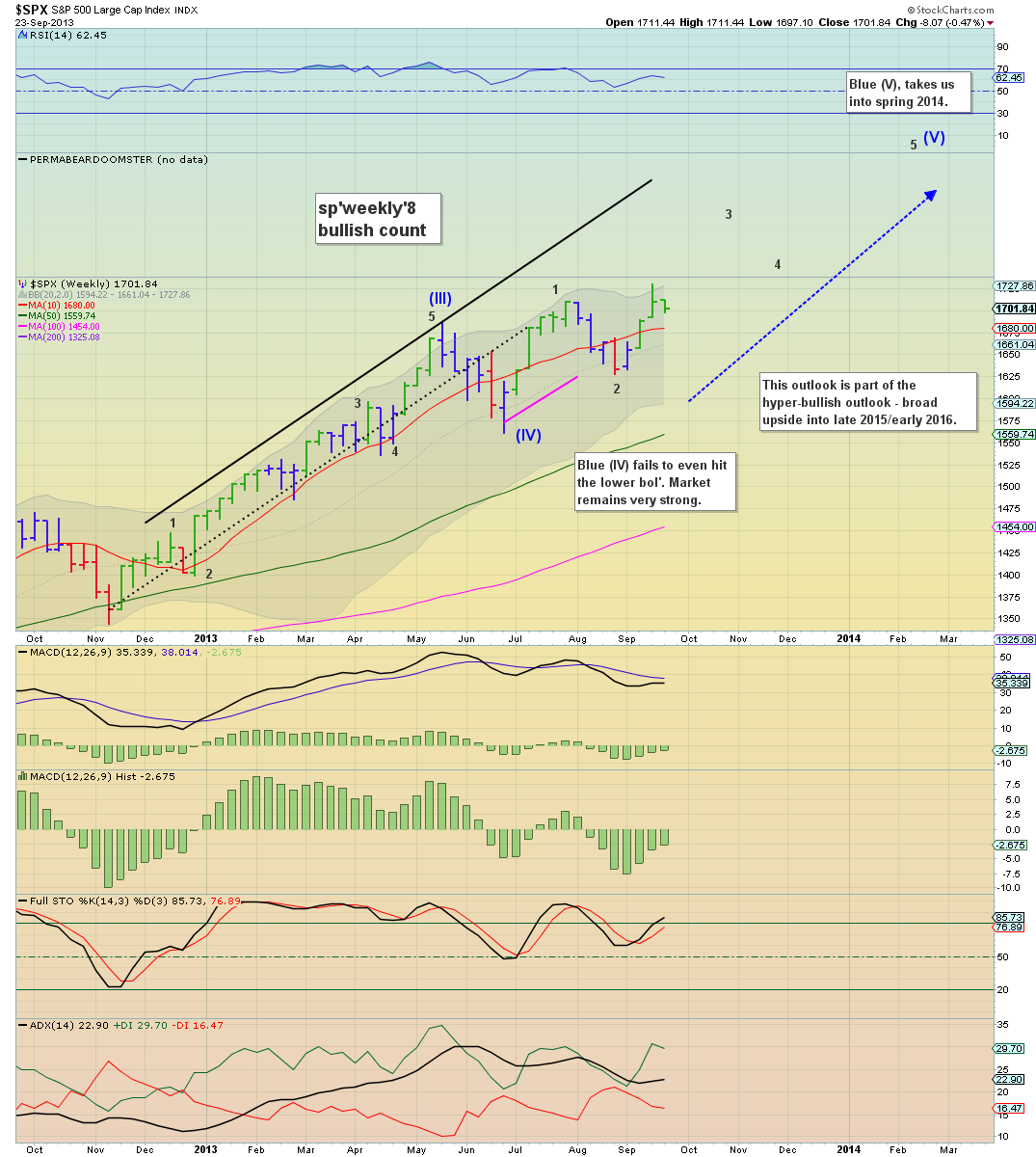 Just two charts to close the day, and frankly, I think anyone still touting 'ohh, the top is in', needs to stare at chart - monthly'8, for a good TEN hours.

Of course, the real effect of QE will NEVER be able to be proved..or disproved. For those who do believe that QE has a positive effect, tt is simply a matter of faith. The Fed are indeed something of a religious cult..you might say.

I'm certainly not going to cover the much discussed mechanisms by which the new (QE) money might find its way into the US capital markets/wider economy, I think after four years..its been covered more than enough.
--

Re: weekly8. Baring a weekly close <sp'1680, I have little concern about the outlook into Christmas and Spring 2014. Sure we'll get little 2-4%, maybe even another 6-8% pull back before year end, but the broader trend remains unquestionably UP.

There is some homes data and consumer confidence in the morning. As ever though, more Fed people are speaking, and Mr Market will be more concerned with the latest fed-speak, than any econ-data.

I have to say, its only Monday, and I'm already tired of this week. I remain long, and will gladly hit the exit button in the sp'1725/35 zone.

The main indexes closed a little lower for the third consecutive day, with the sp -8pts @ 1701. The two leaders - Trans/R2K, declined by 0.6% and 0.1% respectively. Despite the ongoing declines, the bears look weak, with no real downside power. 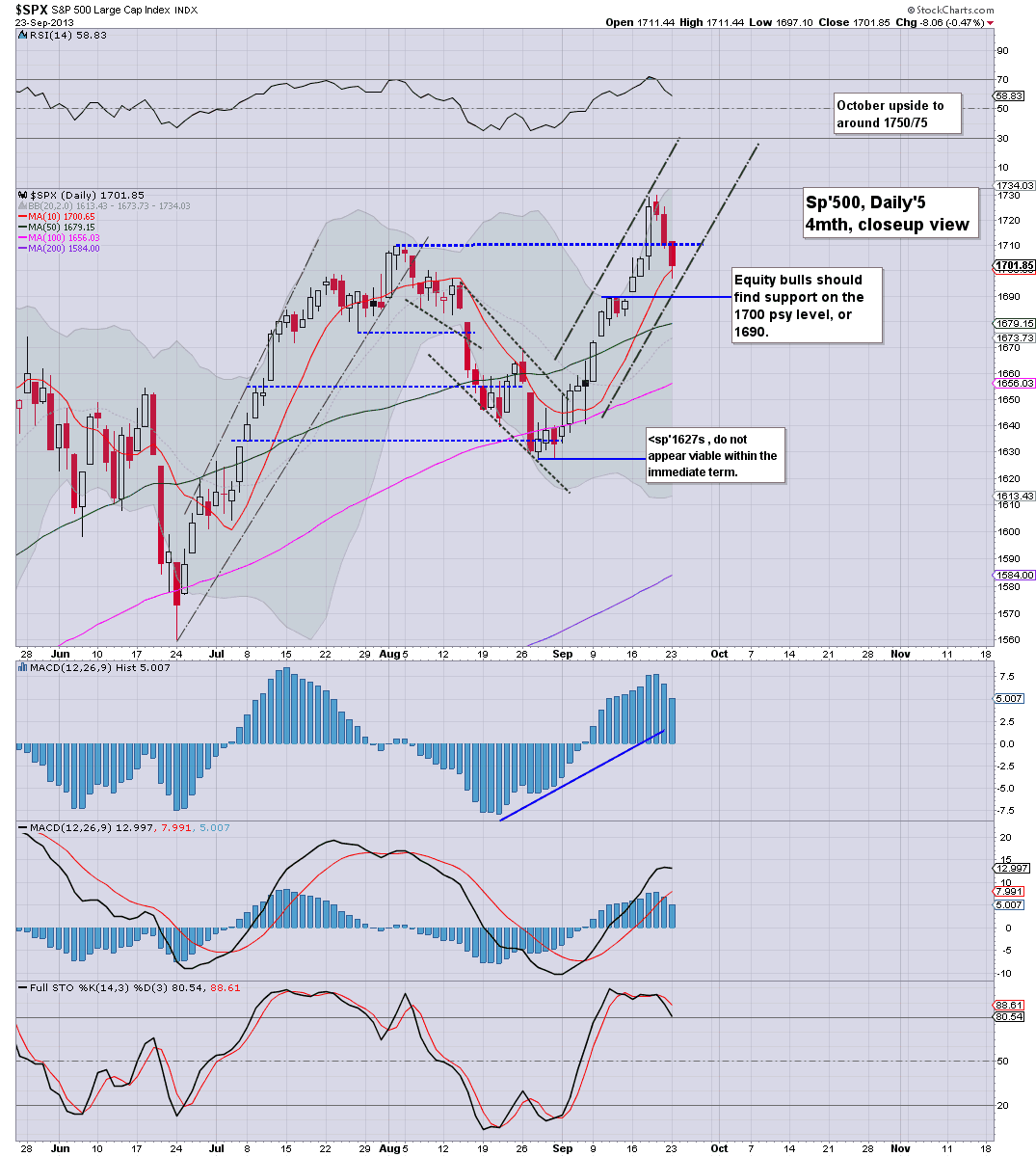 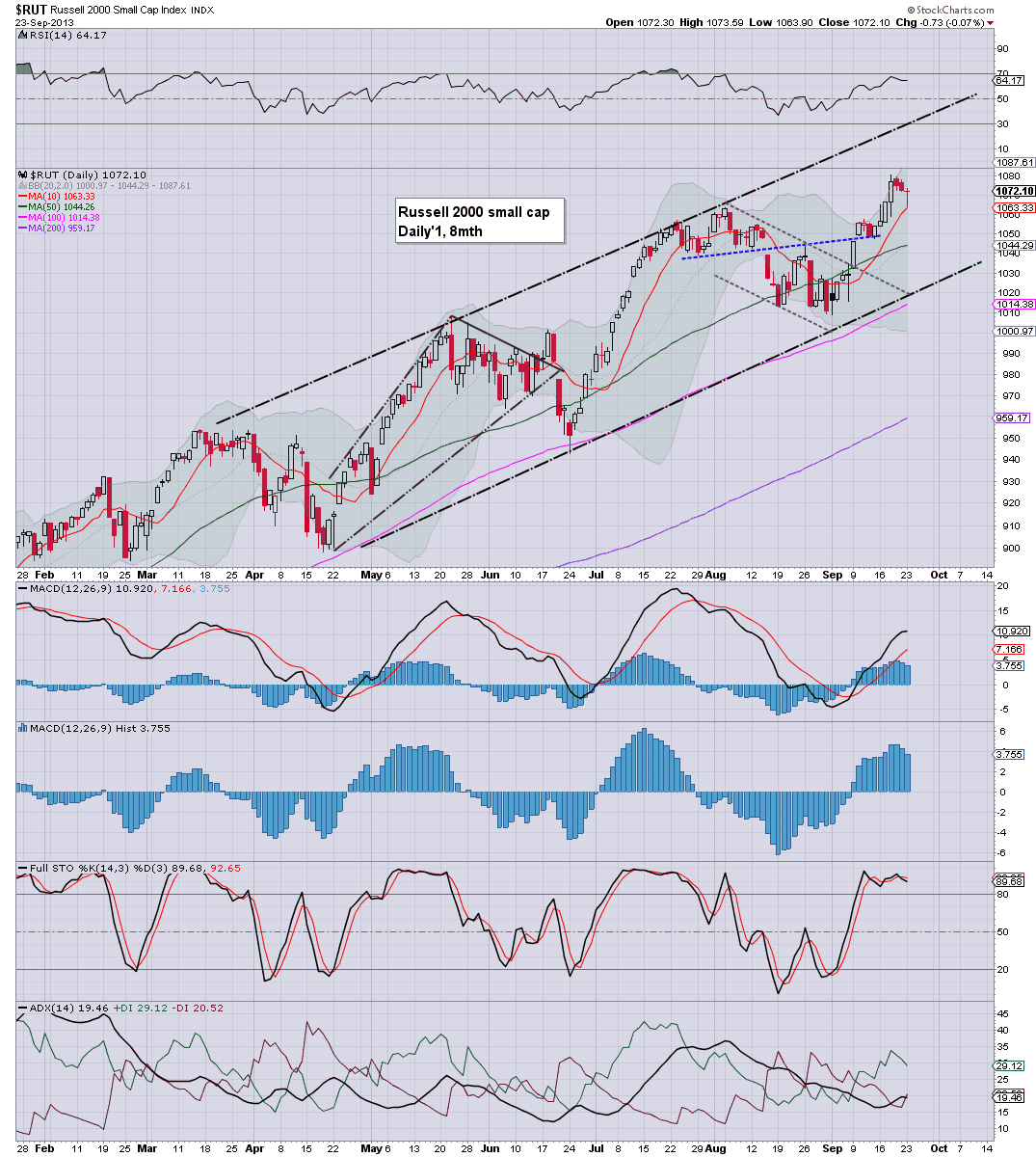 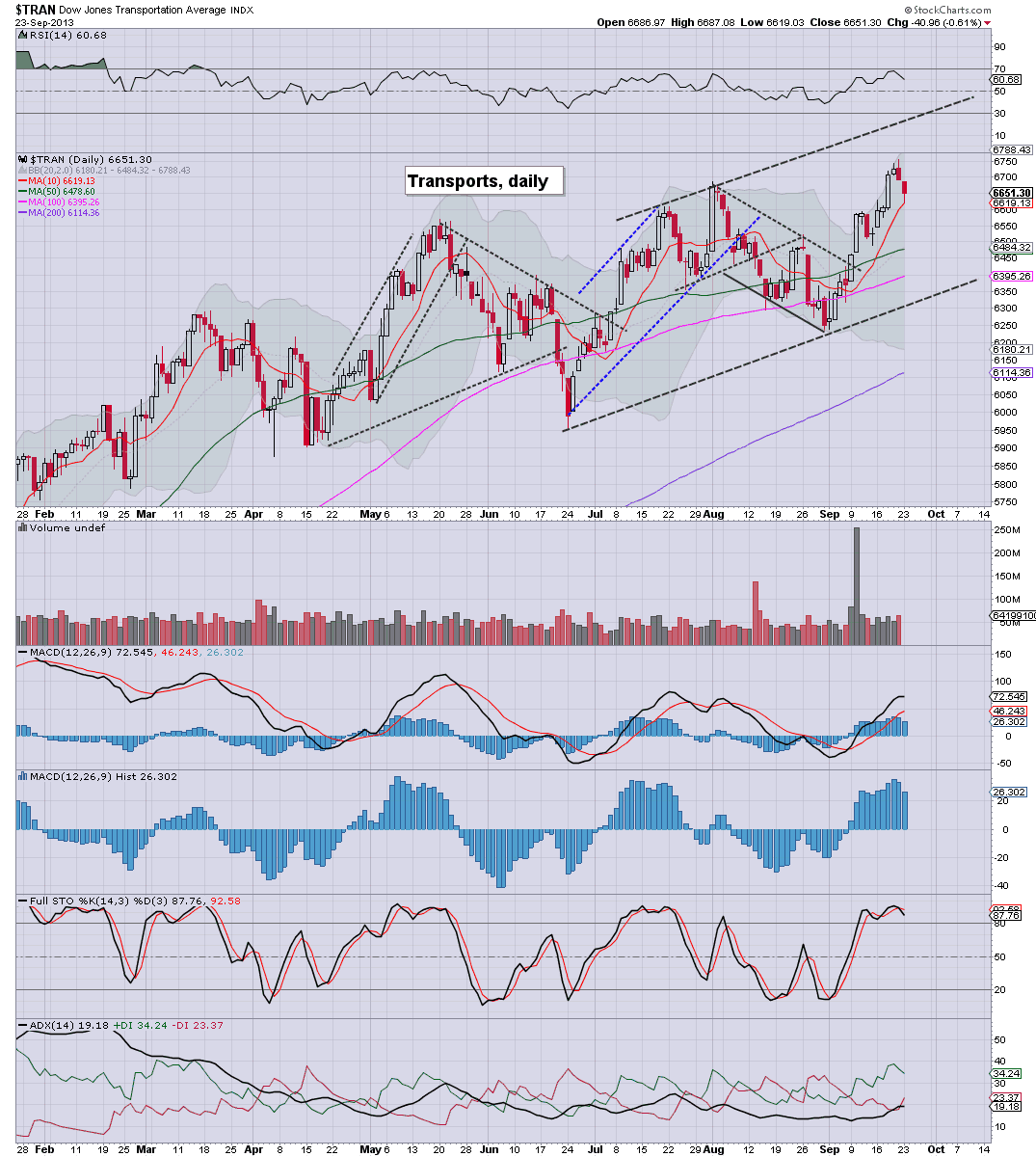 So..three days down, and many are once again calling for some kind of major autumnal collapse wave. It is the same nonsense we heard in late 2009, 10, 11, and indeed last year.

The market remains propped up by a very significant $85bn of monthly QE, and with the mainstream increasingly starting to agree that the thirty year secular bond market is over...where else is the money going to end up, other than equities?

It could be justifiably argued that the trading action of today could have formed a simple bear flag, which will be offering the 1680s by late Tuesday/early Wednesday.

Considering the weekly charts though - of which the bullish case needs to see sp'1680 hold, I'm guessing we'll very likely rally later this week into the 1725/35 zone.
--