It was another negative week for US equity indexes, with net weekly declines ranging from -3.0% (Trans), -1.2% (Dow), to -0.4% (Nasdaq comp'). Near term outlook offers further downside of 2-3%. First opportunity for sustained and powerful downside looks viable from late May onward. 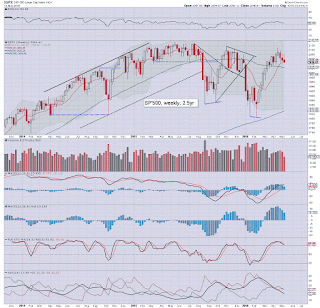 Underlying MACD (blue bar histogram) cycle ticked lower for a third week. At the current rate of decline, there will be a bearish cross in the last week of May.

There are multiple aspects of support in the 2040/1990 zone. Things really only get interesting on a break into the 1980s. From there, its open air to the 1950/00 zone, which remains a valid target for the monthly close.

Best guess: sp'2111 is a key mid term high.. and regardless of any short term chop, an eventual powerful drop to the low 1900s.. with the 1800s in June. Price structure is suggestive of a giant H/S formation, and by default, that offers a grander downside target of the low 1600s this summer/early autumn.

I am resigned to the central banks launching more QE, with the US Fed likely initiating NIRP - to match the ECB and BoJ.

As a result, I still do not see a monthly close under the sp'1500s, and instead would expect renewed upside into year end.
-- 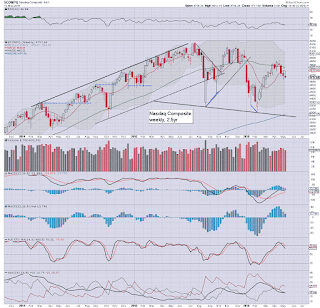 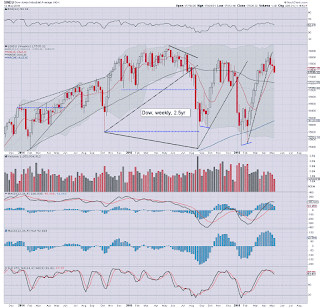 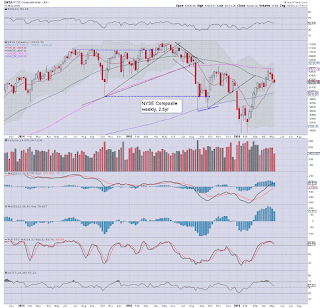 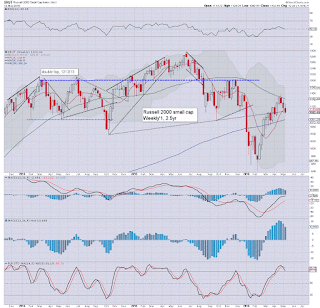 The second market leader - R2K, declined for a third week, -1.1%, settling @ 1102. The 1100 threshold (briefly broken on Friday afternoon), looks set to eventually turn to resistance on the next bounce... after first hitting the 1080/50 zone. Broader downside to 875/850 seems probable this summer. 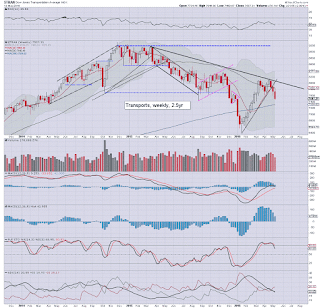 US equity indexes continue to cool from their April highs. Clearly though, even after 3-4 weeks of downside, most indexes are still relatively close to recent highs.

We're yet to see any real significant downside power, and the VIX is reflecting what remains a very complacent mainstream, still confident that 'everything is going to be just fine this summer'.

Most notable, the 'old leader' - Transports, which is naturally leading the way lower. Unless the Transports can break a new multi-month high into the 8200s, the equity bulls should be increasingly concerned.

Best guess: regardless of any near term weakness/chop.. a powerful wave to the downside looks due, with most US (and world) markets vulnerable to declining by around 20%.

... at which point the mainstream cheerleaders on clown finance TV will be screaming at the central bankers to once again save the world from the scary 'deflation monster'.

*there are just a few fed officials due to speak, notably - Williams & Lockhart at a Politico event on Tuesday, and Dudley on Thursday.
--

US equities ended the week on a pretty negative note, with the sp'500 seeing a third consecutive net weekly decline of -10pts (0.5%), settling @ 2046. A major down wave looks due in late May/early June.. with broader market upset across the summer. 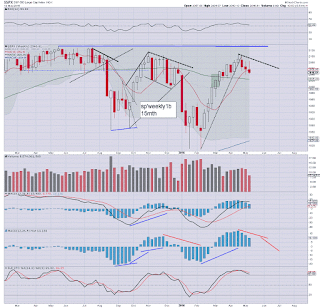 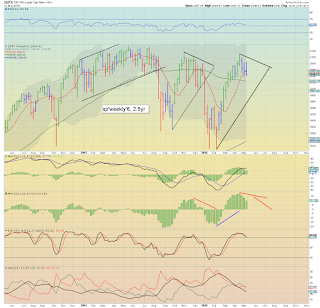 *a notable third blue candle, settling under the 10MA.
--

Suffice to add... a third consecutive net weekly decline, with this week's candle somewhat spiky... and is suggestive of upside exhaustion.

*the weekend post will cover the US weekly indexes
Posted by Trading Sunset at 04:00:00
Email ThisBlogThis!Share to TwitterShare to FacebookShare to Pinterest 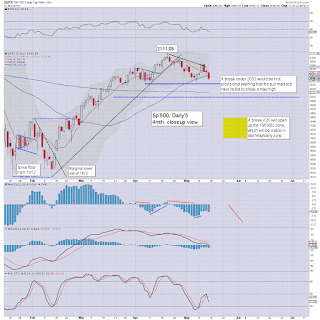 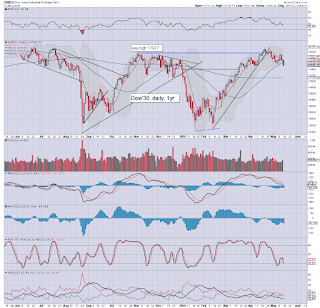 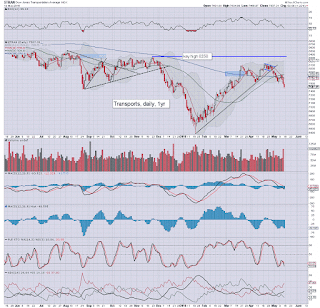 Dow: a decisive weekly close under the 50dma, next support is around 17200. Sub 17K looks out of range in the current down wave.

Trans: a third consecutive significant net daily decline, holding well below the key 50/200 day MAs. Next support is around 7200/100s.