The grand question of the current era remains, which is the more powerful force right now, the deflation...or the inflation?

We have two broad economic camps, both of whom seem to vilify each other equally badly. There are the economic doomster bears, you know the ones, the Dow'1000 - a few of those will tout Oil falling to $10 again. Then there are the Dow'36000 people, although most of the latter seem unwilling to provide an outlook for what oil will be if the equity market doubles up again.

Our current economy is indeed an oil based economy, lets reflect on where we are currently at. We'll look at WTIC (West Texas Intermediate Crude) Oil. 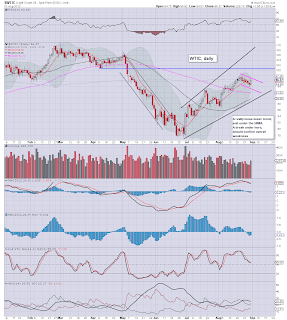 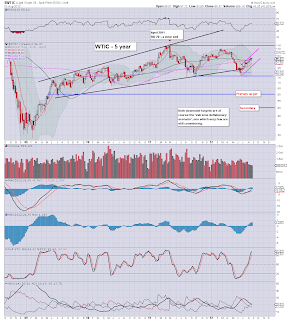 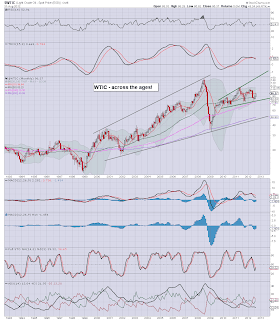 Near term, the trend is bullish, and we even have a large multi-week bull flag right now. A break over 98/99 - and most definitely $100, will confirm the flag, and open up a re-test of the March high of $110. Considering the fact that QE seems likely 'sometime' soon, underlying pressure is UP.

The weekly cycle is certainly an upward trend - since the June low of $77. It could be argued we're in a large multi-month bear flag, but the flag is getting real close to being invalid under any analysis. What is clear, there is no sign of levelling out, never mind an actual rollover.


Oil, too pricey for the western economies?

There are many out there who note that once we get to $125 oil or higher, it has a negative effect on the economy, and thus price will fall as the underlying economy weakens as a result. We could consider positive and negative feedback loops with such issues, but suffice to say...higher prices are not exactly going to 'help' inspire the consumer - of which spending constitutes around 70% of GDP.

We can be clear the Fed is going to do QE3 - probably within the next few months, and that is going to put further upward pressure on Oil prices. At the same time, there is no doubt that the western economies are slowing, and there is even the threat of the US slipping into recession.

The trading resistance/support levels are pretty from the daily and weekly charts, as we move into the early Autumn, lets see if Oil can break back over $100, or if we can take out the June low of $77.

Were it not for the immediate threat of QE, I'd have reasonable confidence in a broadly deflationary outlook into next year. Yet the actions of the Fed have destroyed all 'natural economic cycles', and it has to be said...its impossible to be assured of anything anymore.

All that can be said with certainty, prices won't likely remain flat in the months to come.

Goodnight from the city of $9 gallon gasoline.
Posted by Trading Sunset at 22:48:00
Email ThisBlogThis!Share to TwitterShare to FacebookShare to Pinterest
Newer Posts Older Posts Home
Subscribe to: Posts (Atom)