*special note: Stockcharts no longer cover the FTSE indexes - such as the UK or Italy. I will substitute the former with Greece.
-- 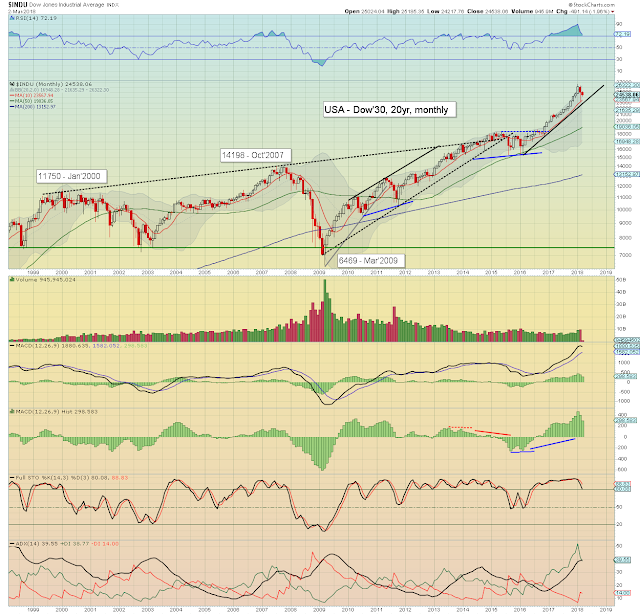 Best guess: s/t weak, but resuming upward into the late spring/early summer. First target is the January historic high of 26616.

Keep in mind the next giant fib' number 26702. Any price action >26800s would be decisive, and bode for far higher levels across the next few years. Such an outlook does not preclude the main market being (briefly) whacked by -15 to -25% this year. Further, >26800s would be indirectly suggestive the sp'500 will eventually break >3047. I do NOT expect to see such a break until another major corrective wave this summer/early autumn.

Equity bears still have little to tout unless a bearish monthly close. For yours truly, that would equate to a monthly close under the monthly 10MA, currently at 23567, and rising by around 340pts each month. Considering the recent power of the late Jan/early Feb' down wave, I am open to a bearish monthly close. However, as based on many issues - not least earnings and econ-data, I'd expect another rebound into/across 2019. Price action from 1998 and 1987 would be valid scenarios.
-- 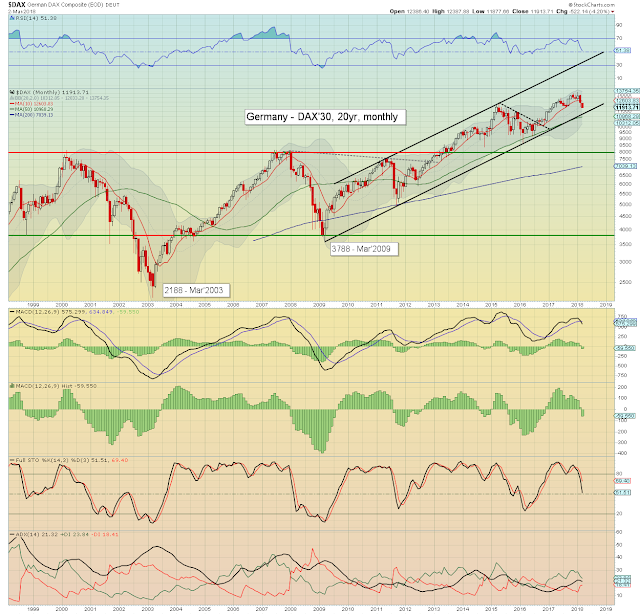 The economic powerhouse of the EU, saw the DAX settle -753pts (5.7%) to 12435. Despite the spike from an intra low of 12003, the DAX still settled under the key 10MA. Further, note the MACD (green bar histogram) cycle has turned negative. This does merit as a provisional 'alarm bell'. March has begun on a very bearish note. 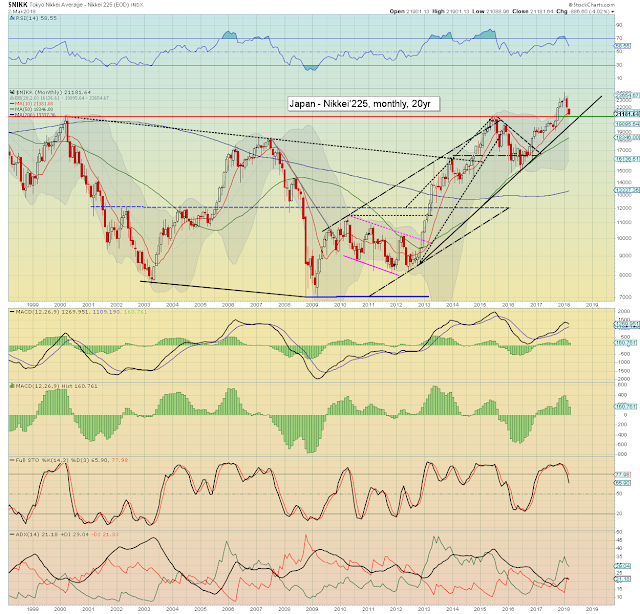 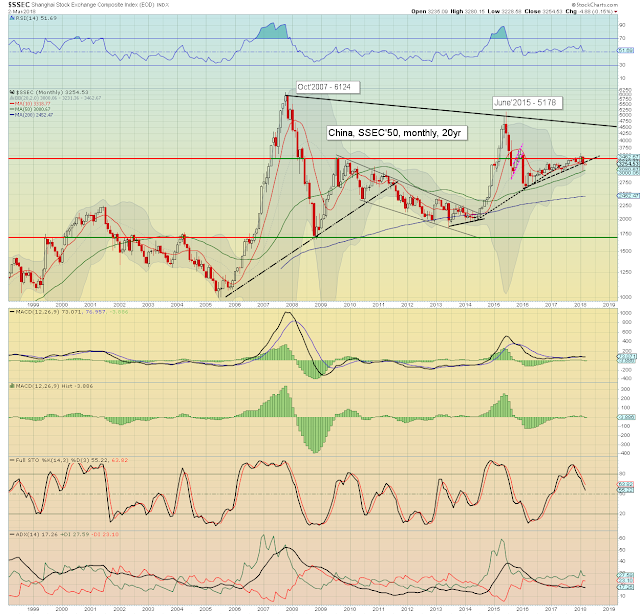 The Chinese market had a very rough month, and despite recovering from a low of 3062, still settled -221pts (6.4%) at 3259, notably below the 10MA. Much like the German DAX, this does merit as a provisional alarm bell, and is only negated with a move back above the Feb' high of 3495. 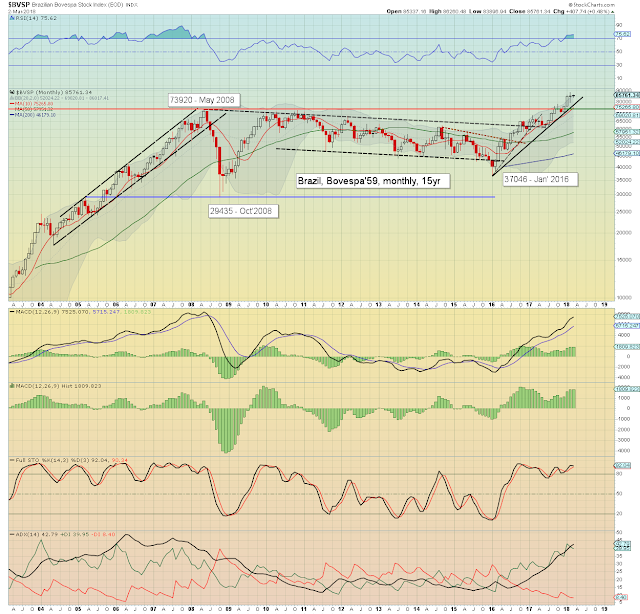 The Brazilian market was notably strong, breaking a new historic high, settling higher for the ninth month of ten, +440pts (0.5%) at 85353. With a recent break above multi-year resistance, a grander push to 100k is very much on the menu. Higher commodity prices (inc' oil and nat' gas) would really help. 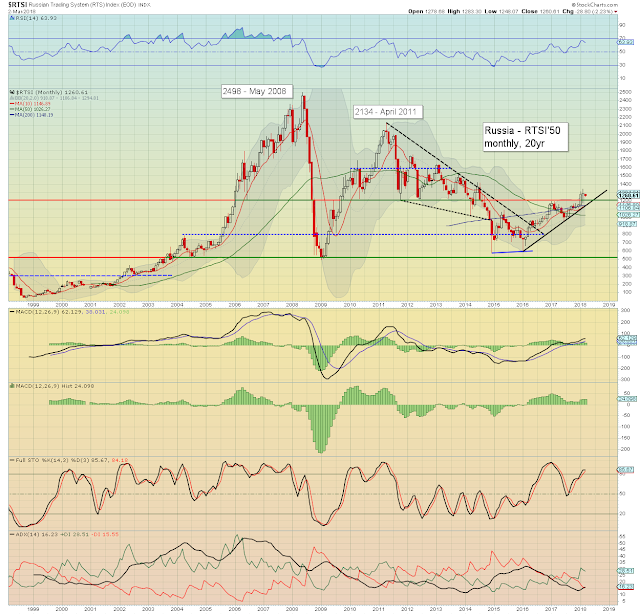 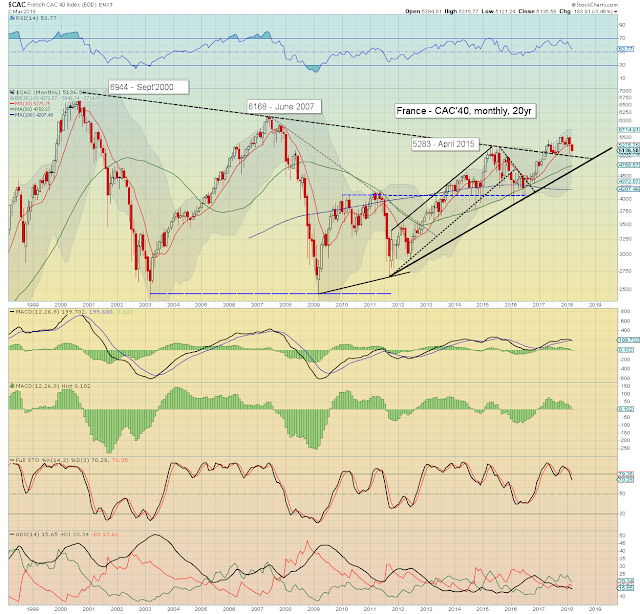 A very mixed month for the French market, seeing an intra low of 5051, but recovering to settle -161pts (2.9%) at 5320. Note the spike from what is the old core downward trend. March has started on a bearish note, but 5K should hold. Soft upside target is upper monthly bollinger in the 5700s. 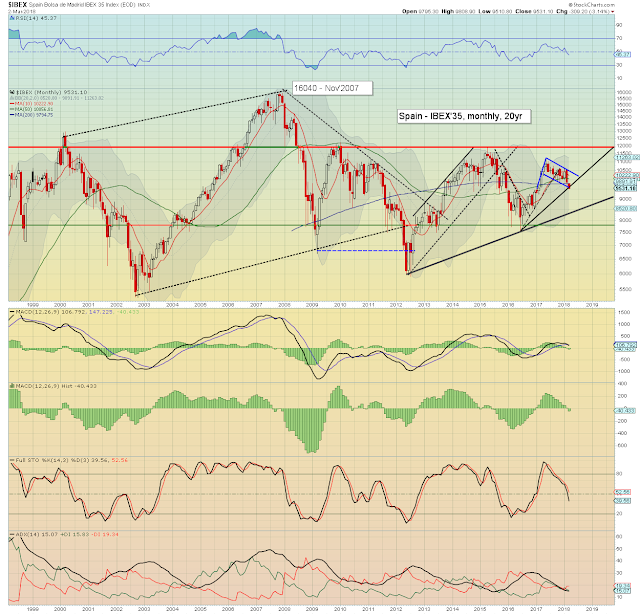 A powerfully bearish month for Spanish equities, settling -611pts (5.8%) to 9840. Price structure from May 2017 could still be argued is a giant bull flag. That would be provisionally confirmed with a break >10543, which would offer a challenge of multi-year resistance of 12k. 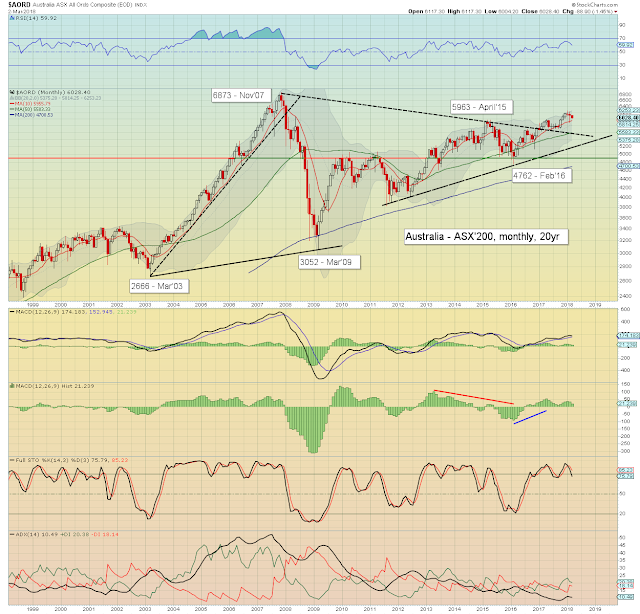 The Aussie market was very resilient, settling -29pts (0.5%) at 6117. The AORD is comfortably holding above old declining trend. The 6200/300s look a pretty easy target within a few months, not least if commodities lean upward. 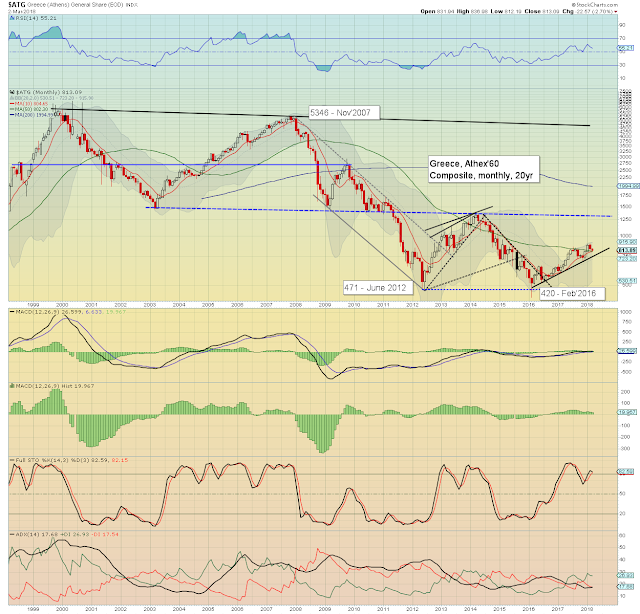 The economic basket case of the EU - Greece, saw the Athex net lower by -43pts (4.9%) to 835. The m/t trend from Feb'2016 remains intact. There are of course a great many 'systemic' economic problems in Greece, none of which have been fixed. For the moment, things are quietly ticking along, but when the next EU wide recession hits, the Greek people are in for a world of even more hurt.
--

The Chinese and German markets are flashing provisional alarm bells, having both settled below key aspects of support.

The Russian and Brazilian markets are very resilient, primarily as commodities prices are still leaning upward.

The US market is still mid/long term bullish. For the Dow, that would only provisionally change with a monthly close under the key 10MA. To be decisive, rising trend (from Feb'2016), currently around 23k.
--


If you value my work, subscribe to my intraday service.
For details: https://permabeardoomster.blogspot.co.uk/p/subscriptions.html

Have a good weekend
–
*the next post on this page will likely appear 6pm EST on Monday.
Posted by Trading Sunset at 17:00:00
Email ThisBlogThis!Share to TwitterShare to FacebookShare to Pinterest
Newer Posts Older Posts Home
Subscribe to: Posts (Atom)