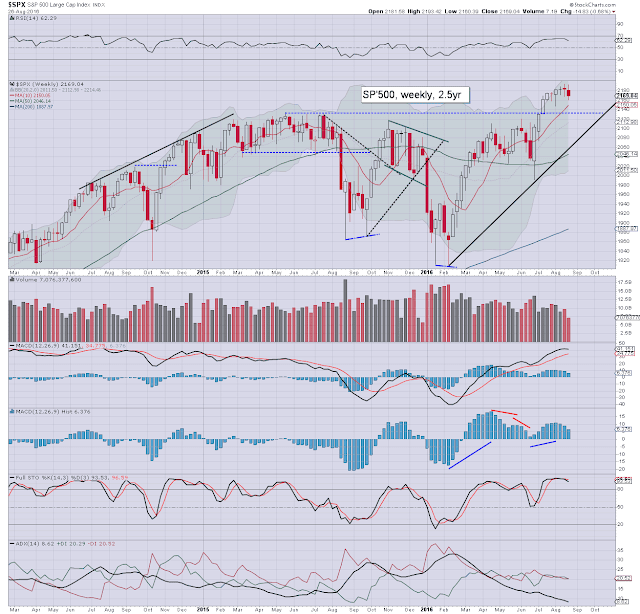 With a three day run of daily declines, the sp' saw a net weekly decline of -14pts (0.7%), settling at 2169. Its notable that the market did challenge the recent historic high of 2193, and saw a clear rejection.

Rising trend - linking the Feb' and June lows, will be in the 2130s by mid October. Unless equity bears can break under 2134, the 2100 threshold, and see a close under the monthly 10MA (2060/70s in Sept/Oct)... there still isn't any reason to get overly concerned about some kind of autumnal crash.
-- 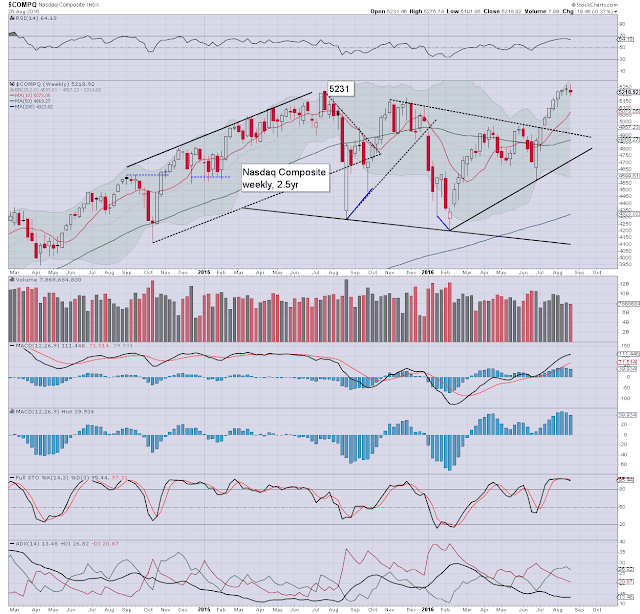 After eight weeks of consecutive gains, the tech' finally saw a decline... but just -0.4%, settling @ 5218. However, its notable the Nasdaq did attain a new historic high of 5275. First big support is the 5000/4950 zone. As things are, a monthly close - whether Aug/Sept', in the 5300s still looks probable, and that should be enough to awaken the mainstream to the notion that the 6000s will be a valid target by late spring 2017. 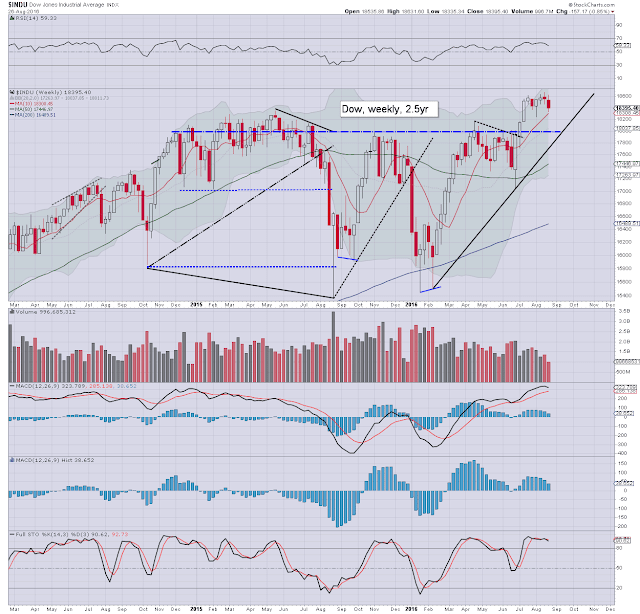 The mighty Dow settled -0.8% @ 18395. The 18k threshold remains powerful support, and frankly, that should hold in the months ahead. The upper weekly bollinger is in the 18800s, price action >19k looks viable in the latter half of September. 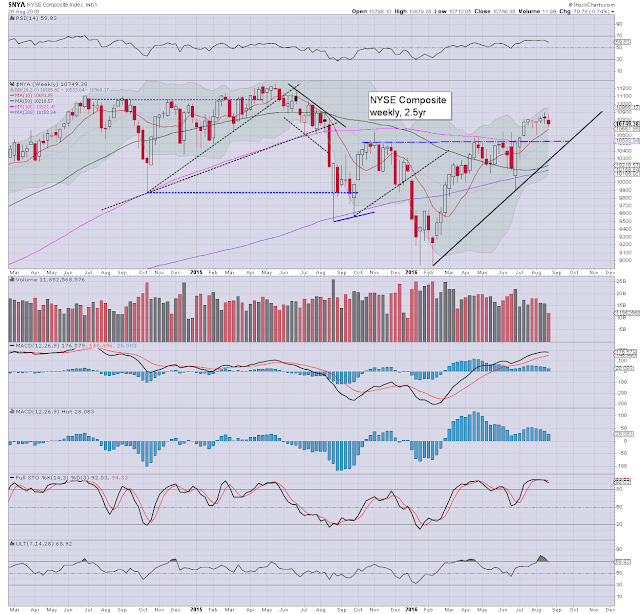 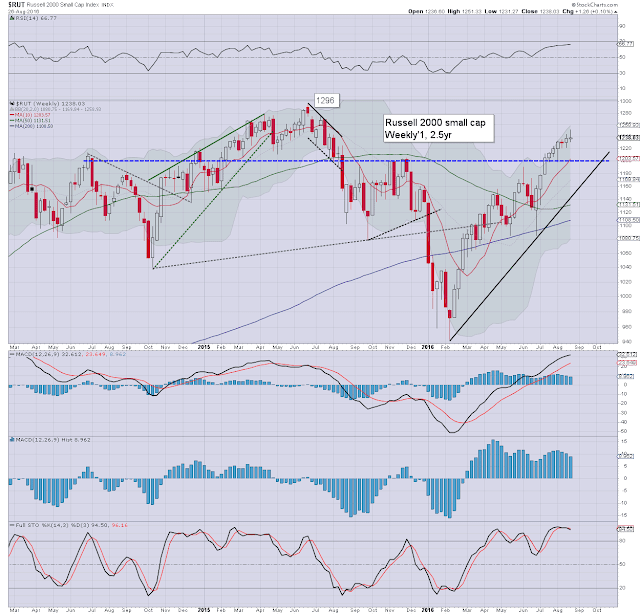 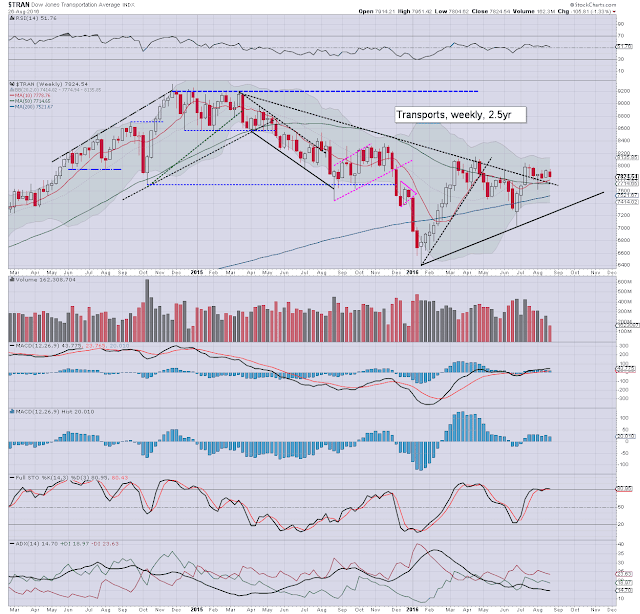 The 'old leader' - Transports, remains the market laggard, settling -1.3% @ 7824. The 8k threshold is strong resistance. Things only get bearish if <7600. Alarm bells should sound this autumn if <7k, but that does look unlikely.
--

A mixed week for US equities.

Despite the chop/weakness, the Nasdaq still managed a new historic high, with the R2K continuing to close in on breaking the June 2015 high of 1296.

Equity bulls have a basic safety-buffer zone of around 2% - such as the breakout level of sp'2134.

Things only turn provisionally bearish if core rising trend is broken, and more so, the June lows - such as sp'1991.

*there are a number of fed officials speaking Wed-Friday.

**Friday will see normal trading hours, however its important to keep in mind the following Monday (Sept'5th) is closed for the 'Labor day' holiday. So... price action is likely to become quickly subdued once the jobs/econ-data has been released.

If you have valued my posts since February 2012, please support me via a monthly subscription, which will give you access to my continuing intraday posts at my main home of  permabeardoomster.com.

If you think I'm worth at least something around $1 per trading day, then sign up!

As ever, your comments - whether bullish or bearish, are welcome.

--
*the next post on this page will appear Monday at 7pm EST
Posted by Permabear Doomster at 17:00:00
Email ThisBlogThis!Share to TwitterShare to FacebookShare to Pinterest

Some swings to end the week 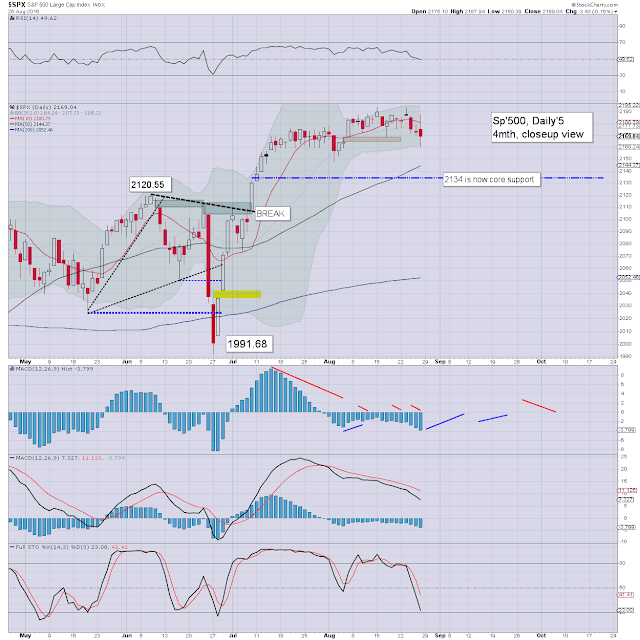 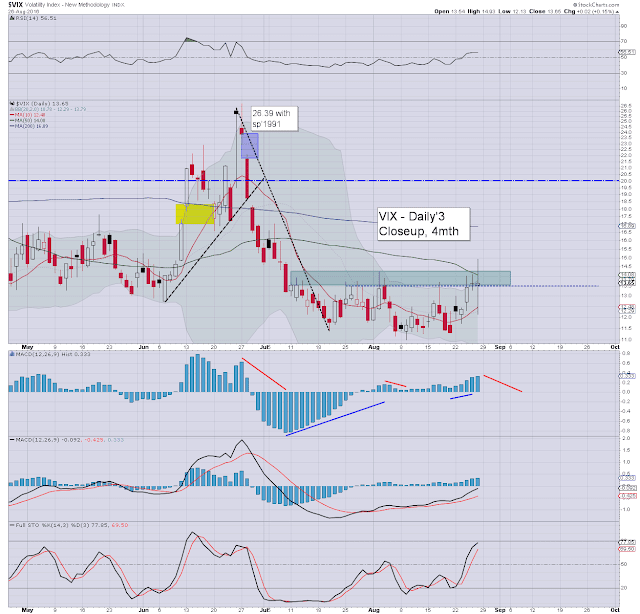 Yellen placated the market in early morning with the usual fedspeak, and after a little chop the market had climbed to sp'2187. Yet..  Fed official Fischer's appearance on clown finance TV gave the market the excuse for a significant swing lower. The sp' tested the lower daily bollinger @ 2160, with a closing hour moderate recovery.

Despite the 27pt downward swing, the VIX only managed a high of 14.93, and with the closing hour recovery, it cooled back to the mid 13s. Broadly the key 20 threshold still looks at least another month away.

--
*the weekend post will appear Sat' 12pm, and will detail the US weekly indexes
Posted by Permabear Doomster at 00:00:00
Email ThisBlogThis!Share to TwitterShare to FacebookShare to Pinterest
Newer Posts Older Posts Home
Subscribe to: Posts (Atom)