It was another wild week for the US equity market, with net weekly gains ranging from 2.3% (Nasdaq), 1.4% (sp'500, NYSE comp'), to 0.7% (Dow). Near term outlook offers further upside to around sp'1970, before the broader downward trend should reassert itself. 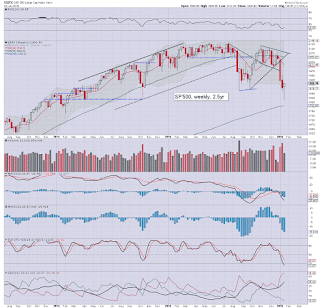 So, we're still a long way from being as oversold on the bigger weekly cycles as the 2011/2008 declines. The giant monthly cycles are even clearer, offering the equity bears a great deal of viable downside in the months ahead.

Best guess: near term upside to the 1970s, but then renewed downside, with an initial target of the 1750/25 zone - where there are multiple aspects of support. Broadly, the low 1600s look a realistic target within the March-April time frame.
-- 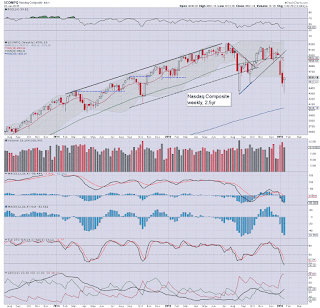 The tech was the leader this week, with the most well defined weekly candle, a hyper-spike floor, settling at the highs of the week @ 4591. There will be stiff resistance in the 4700/800 zone. Sustained action back above the 5K threshold looks out of range until Q4. 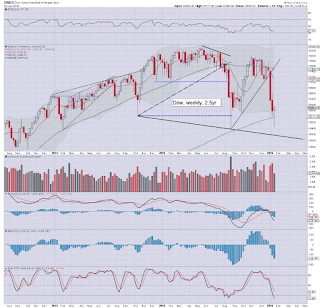 The mighty Dow was the weakest index this week, settling net higher by +0.7% @ 16093. The Dow was held back by AXP and GE, both of which had earnings and an outlook that wasn't pretty. Next upside resistance is the 16500/600 zone. Sustained action >17K looks out of range.

In terms of downside, first target is the Aug'2015 low of 15370, then 14k, and 13K. Sustained action <13k looks very difficult, not least as the central banks will more than likely intervene in the coming months. 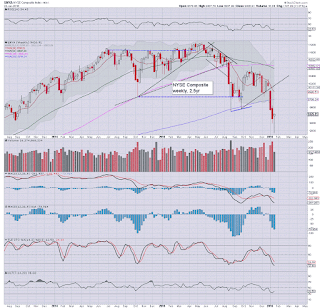 The master index saw a net weekly gain of 1.4%, settling @ 9426. There will be powerful resistance around 9800. Sustained action >10k looks extremely unlikely. Downside to 8K appears due in the late spring. 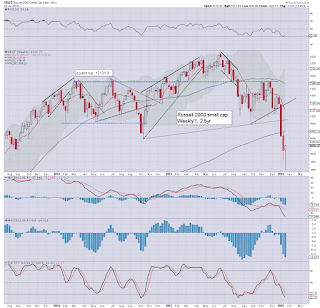 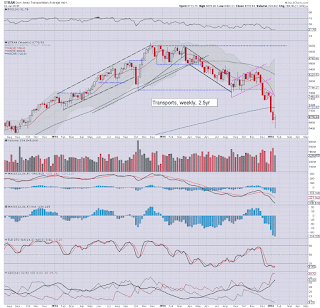 It sure was another wild week for US equities. The market mood was especially sour, with most indexes breaking new multi-year lows.

The post Wednesday rally of almost 5% has resulted in weekly candles that are offering a spike floor. Typically, such powerful spikes are highly indicative of a key floor that will last many months.. even years.


Remaining bearish into the spring

Bounces are a natural part of any multi-month decline. The bigger issue was the big bear flag that developed from last August to December. The first few weeks of January have already confirmed the flag. 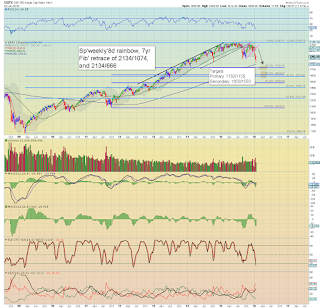 As things are, I still don't see sustained action under 1600, even if WTIC Oil is briefly in the upper teens.

The week starts quietly, but builds to the FOMC on Wednesday. Arguably, the highlight though, will be Q4 GDP data on Friday.

FOMC announcement @ 2pm. There will NOT be a press conf'.

*the only fed official on the loose will be Williams (Friday)
--

After breaking a new multi year low of sp'1812, the sp'500 saw a net weekly gain of 26pts (1.4%), settling @ 1906. US equities - along with other world markets, are set to continue bouncing across much of next week. The broader outlook though remains bearish, with target downside to the 1600s. 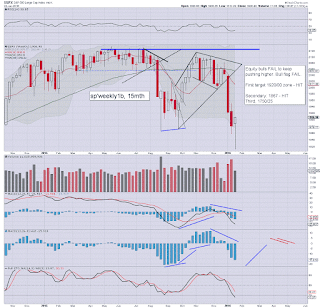 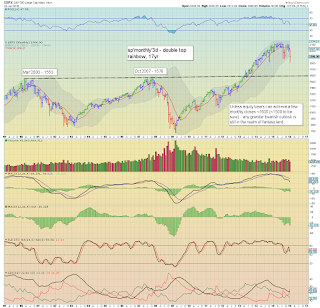 Suffice to add... the weekly candle has one hell of a spiky floor, highly indicative of further upside. The only issue is how far.. and how long will it take for the next rollover.

Right now, I find it difficult to see sustained price action >1980. It seems entirely possible the market will max out late next week, and then resume falling to the 1750/25 zone by mid February.
-

re: monthly3d. I hold to my original outlook that the market will unravel into the late spring/early summer, but should stabilise around the sp'1600 threshold. What the central banks will then do... difficult to say, but they will be highly inclined to spool up the printers.. even at the US Fed.

US equities ended the short week on a powerfully bullish note, sp +37pts @ 1906. The two leaders - Trans/R2K, settled higher by 1.3% and 2.3% respectively. Near term outlook offers threat of an opening Monday decline, but then climbing across much of next week, probably to the sp'1970s, with VIX 18/17s. 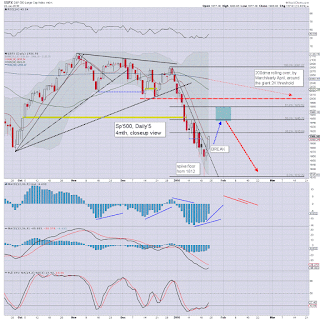 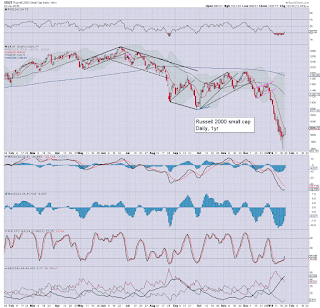 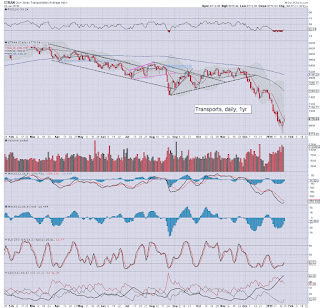 *the second consecutive net daily gain for most indexes.
--

With the sp'500 having imploded from 2081 to 1812 across 14 trading days, it is not surprising to see a bounce now well underway. Indeed, having already climbed around 4.7% from the Wednesday low, half of the bounce has already played out.

The FOMC will be a threat to equity bears next week, and it would seem a fib' retrace bounce to the 1970s is  probable.
-