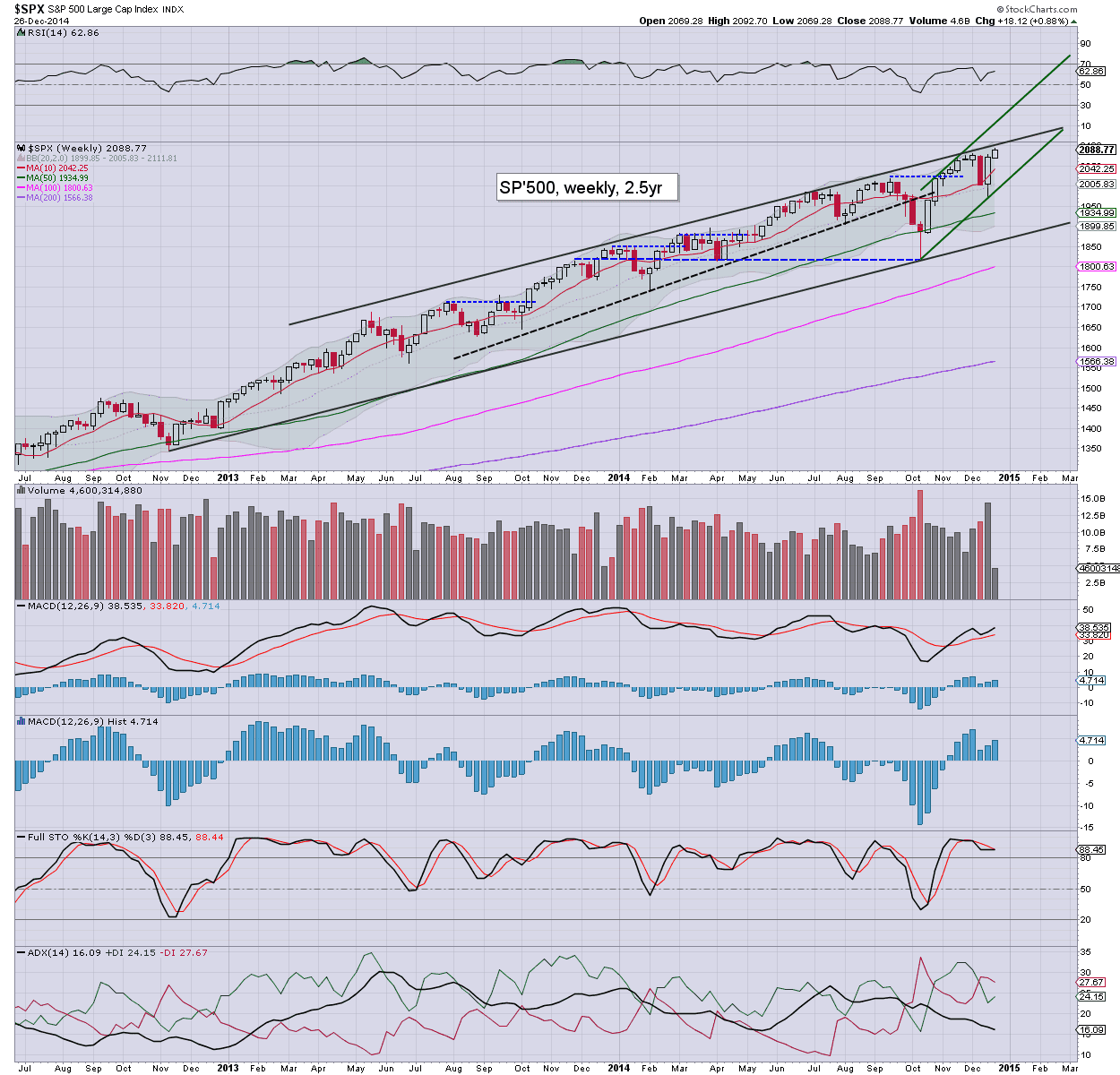 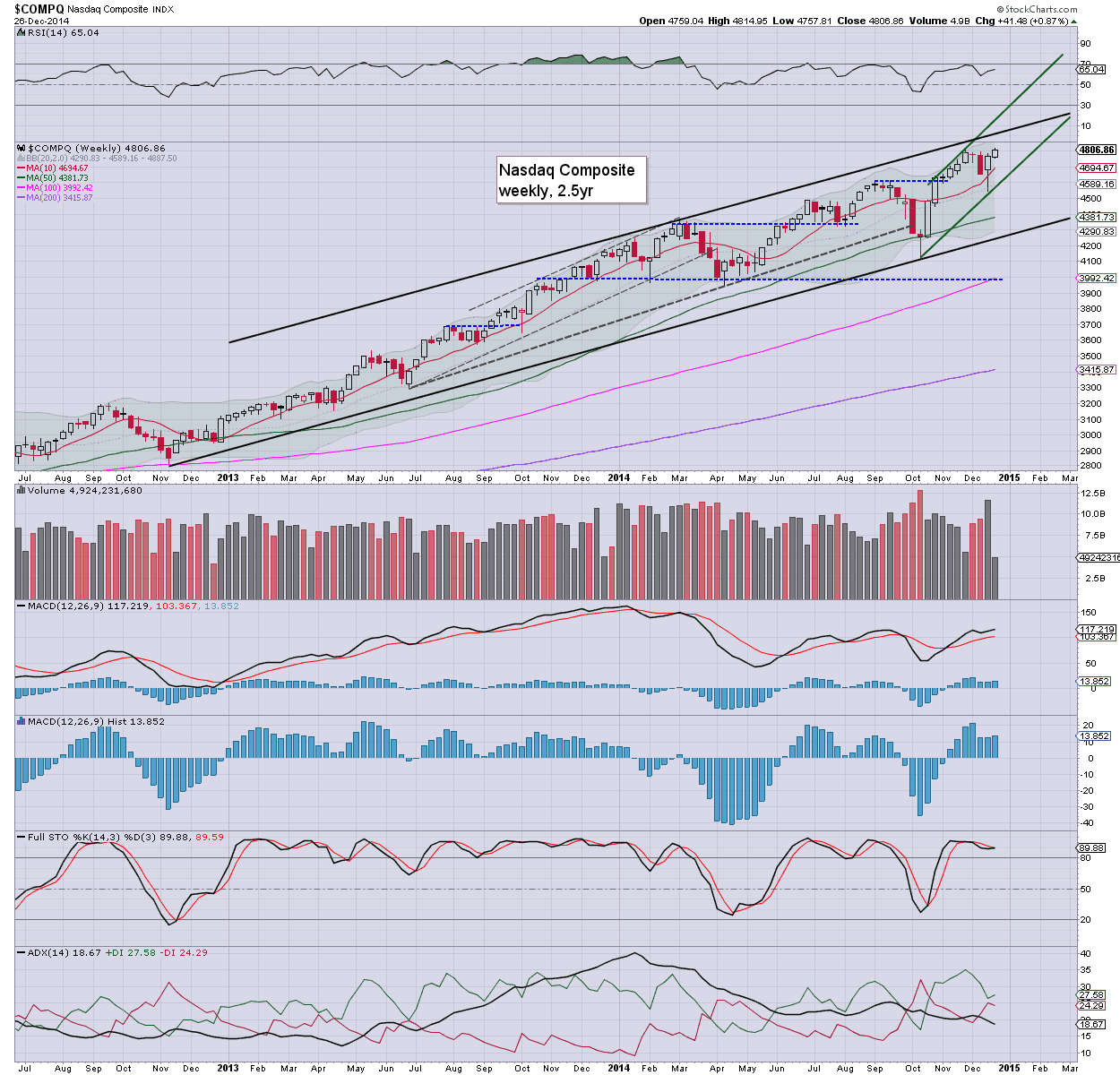 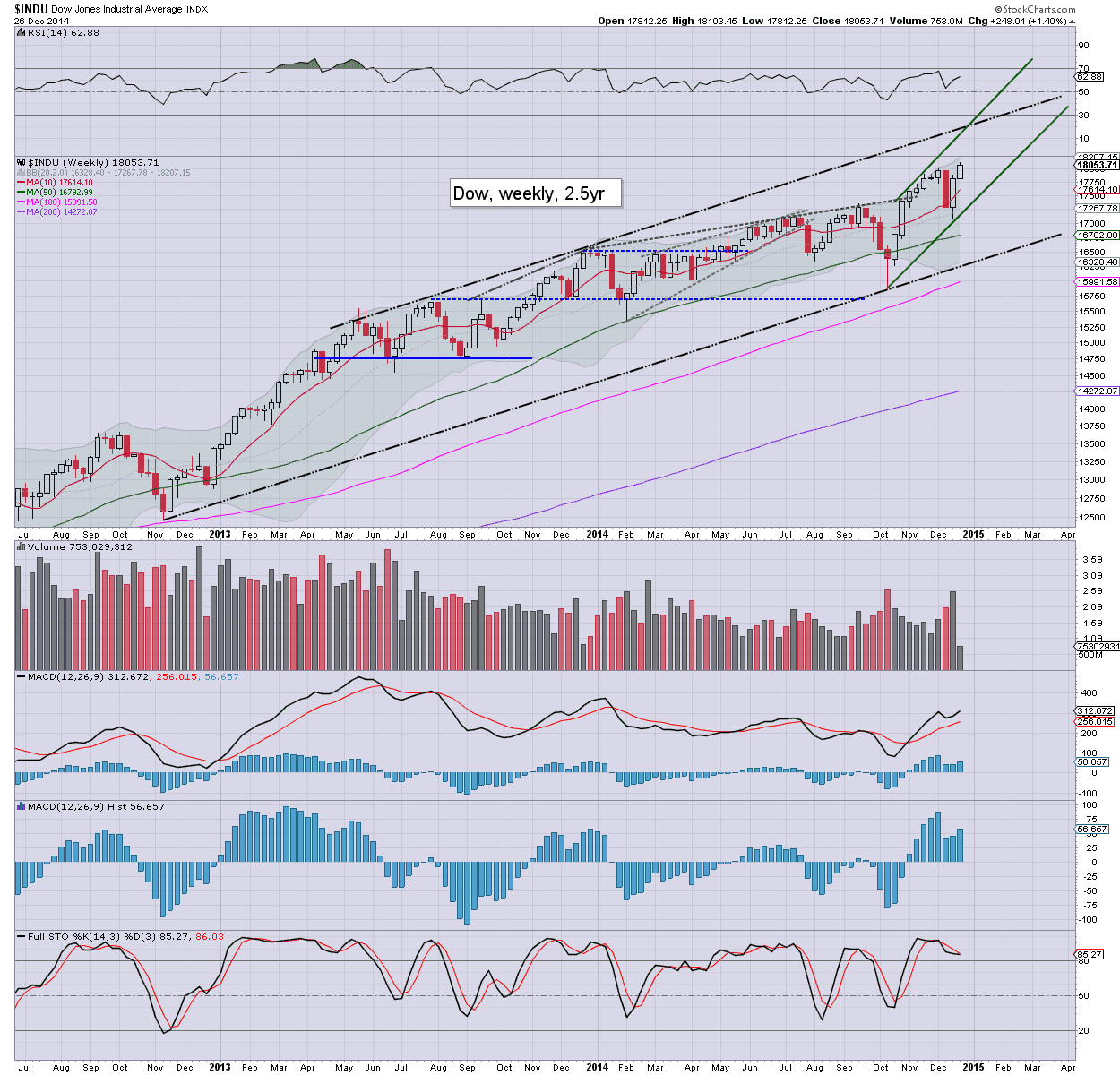 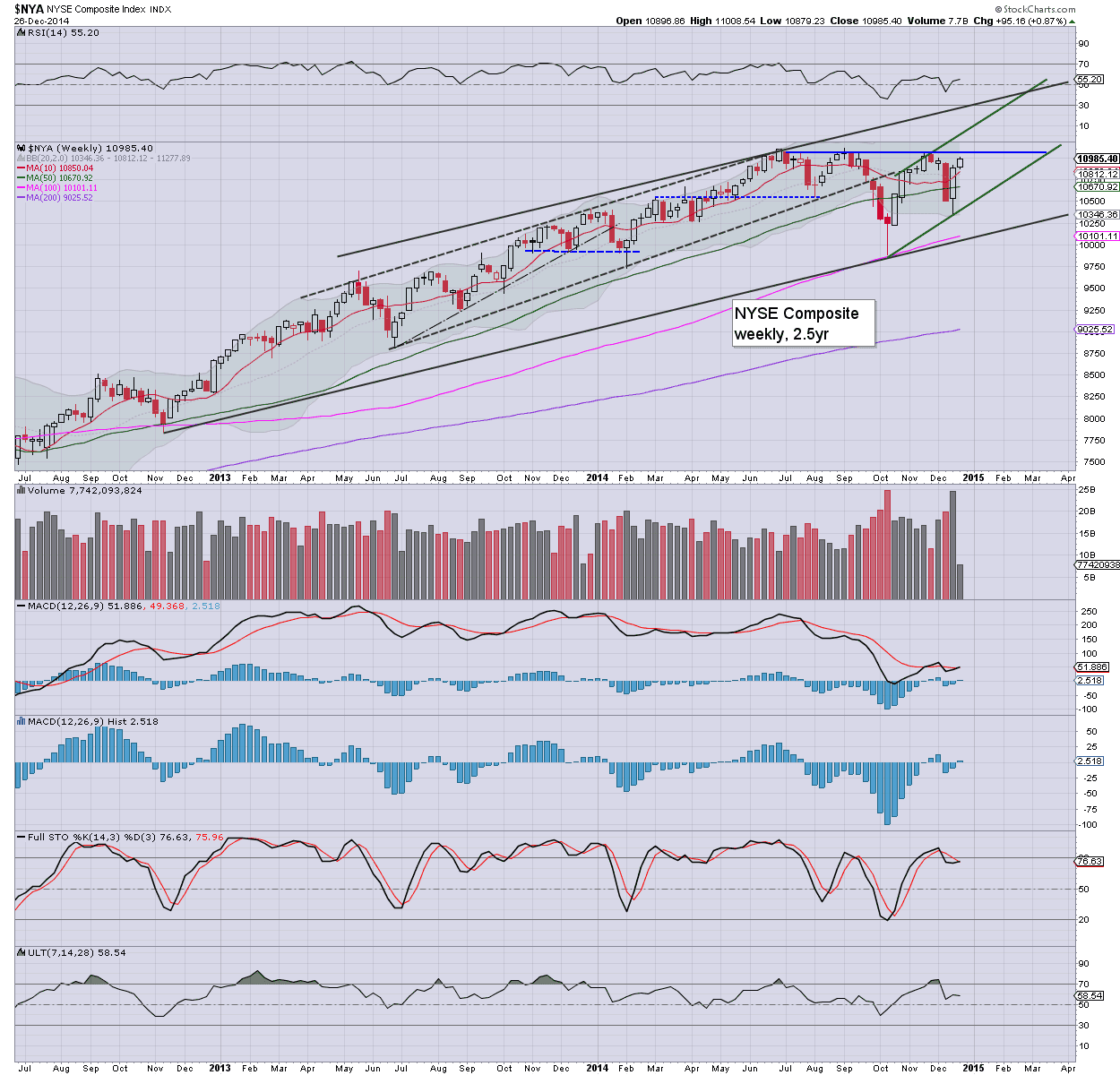 The master index gained around 0.9% this week, having broken the 11k threshold (briefly) on Friday. Next upside target are the 11300s. 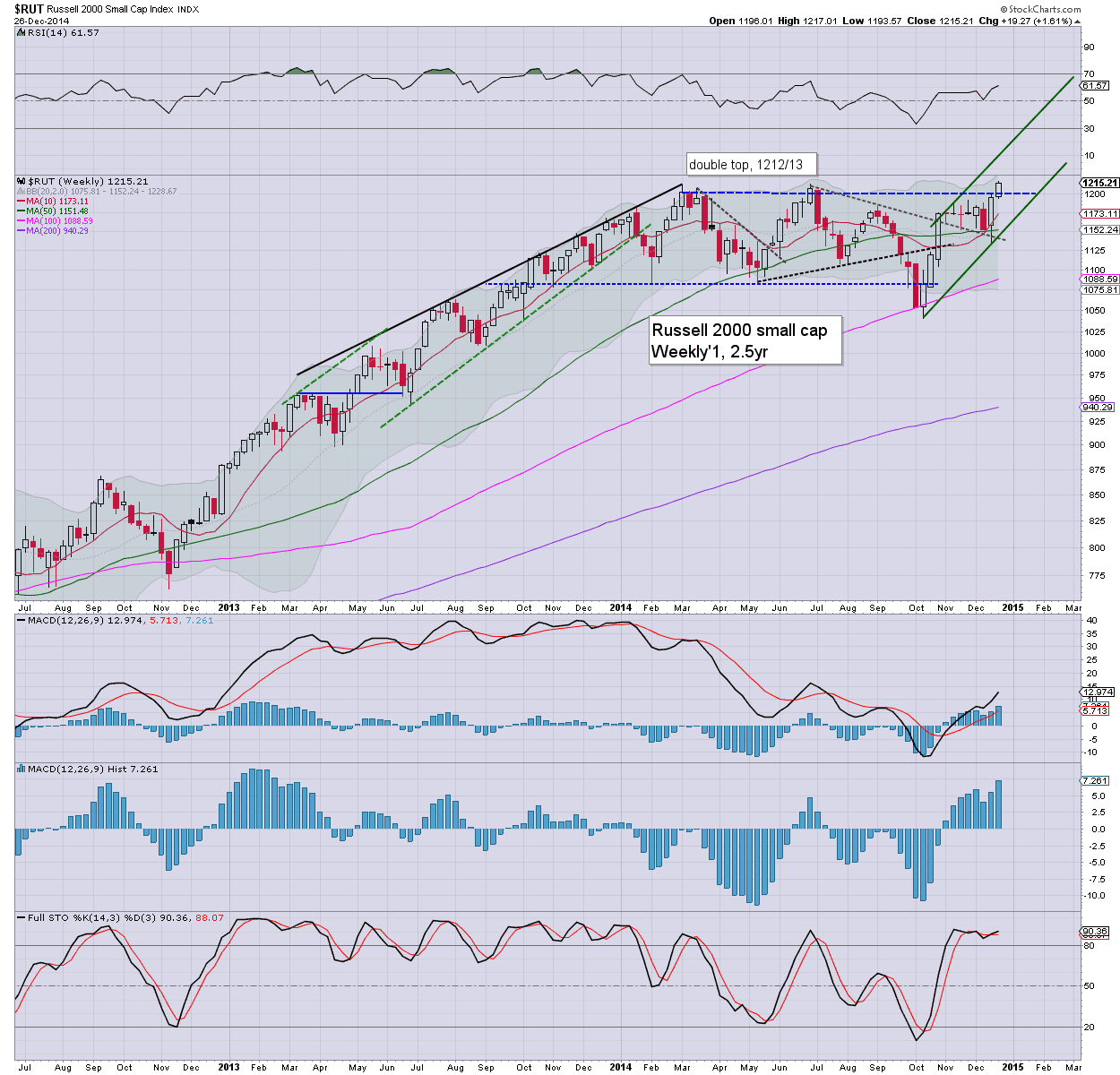 The second market leader has seen a critical breakout to the upside, having been stuck for the year. The double top of March/July - 1212/13 has been decisively closed over, with a new historic high of 1217.

The breakout in the R2K is arguably the most significant bullish event in the past few months.. perhaps even the year. Next upside target are the 1300s... the 1500s by end 2015 look very viable. 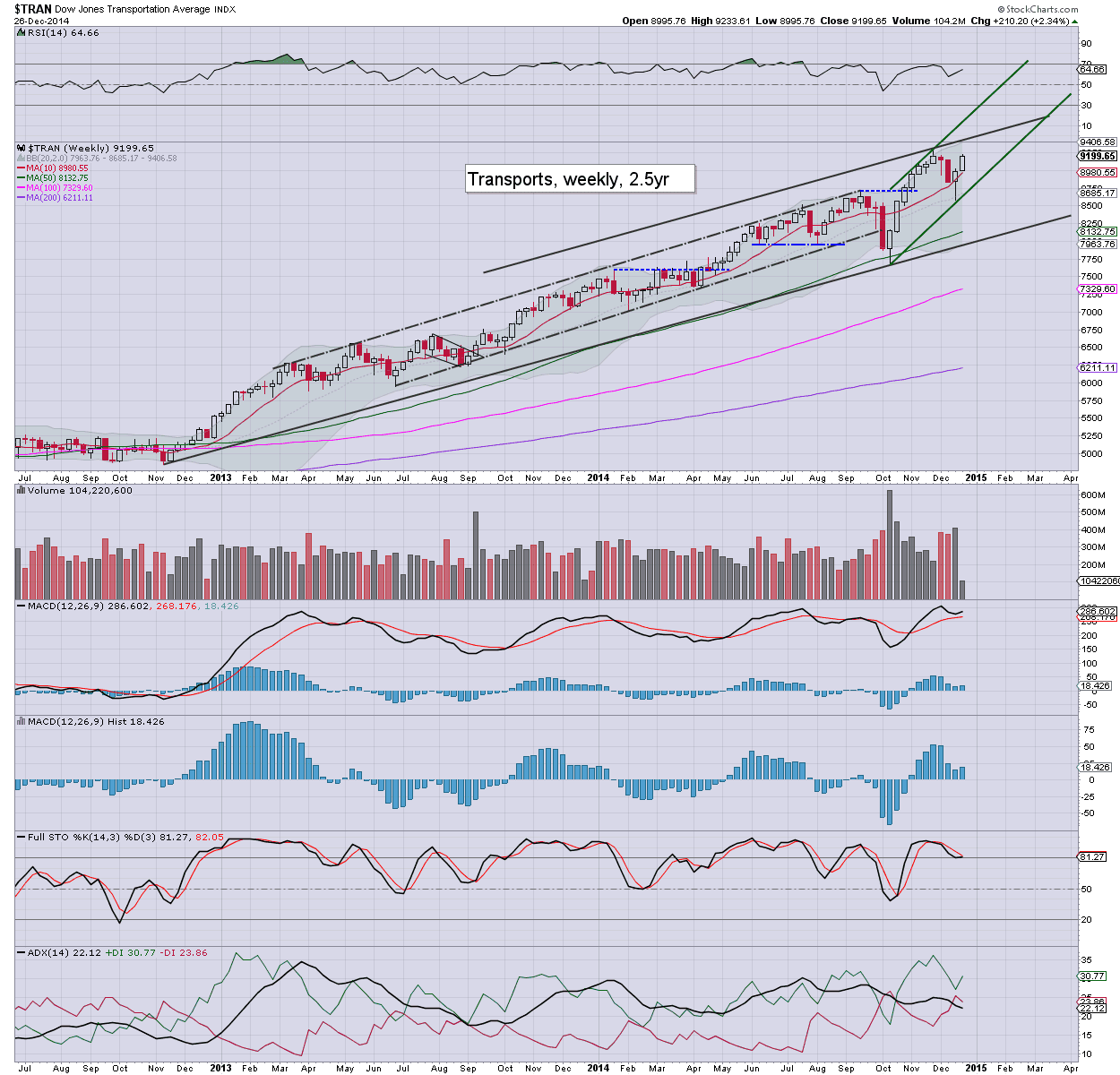 The 'old leader' is leading the way, with another strong weekly gain of 2.3%. The 9500s look likely in Jan/Feb... before the next possible retrace. A break <9000 in the next wave lower looks highly unlikely. The giant 10k threshold looks a reasonable target for 2015, although the transports stocks will be somewhat laggy if Oil has seen a mid term floor in the $53s.

Suffice to say.. a second week higher, with new historic highs not just in the Dow and sp'500... but far more importantly... in the R2K.

Further upside into Jan' 2015 looks highly probable. At best, equity bears might achieve a few weeks of downside, starting somewhere in the 2125/50 zone. On no outlook does sub sp'2k look viable for a very considerable time.

Again, it will be a short trading week... the only notable data is Chicago PMI on New Years eve.


--
back on Monday
Posted by Trading Sunset at 17:00:00
Email ThisBlogThis!Share to TwitterShare to FacebookShare to Pinterest

Bull maniacs get the R2K signal 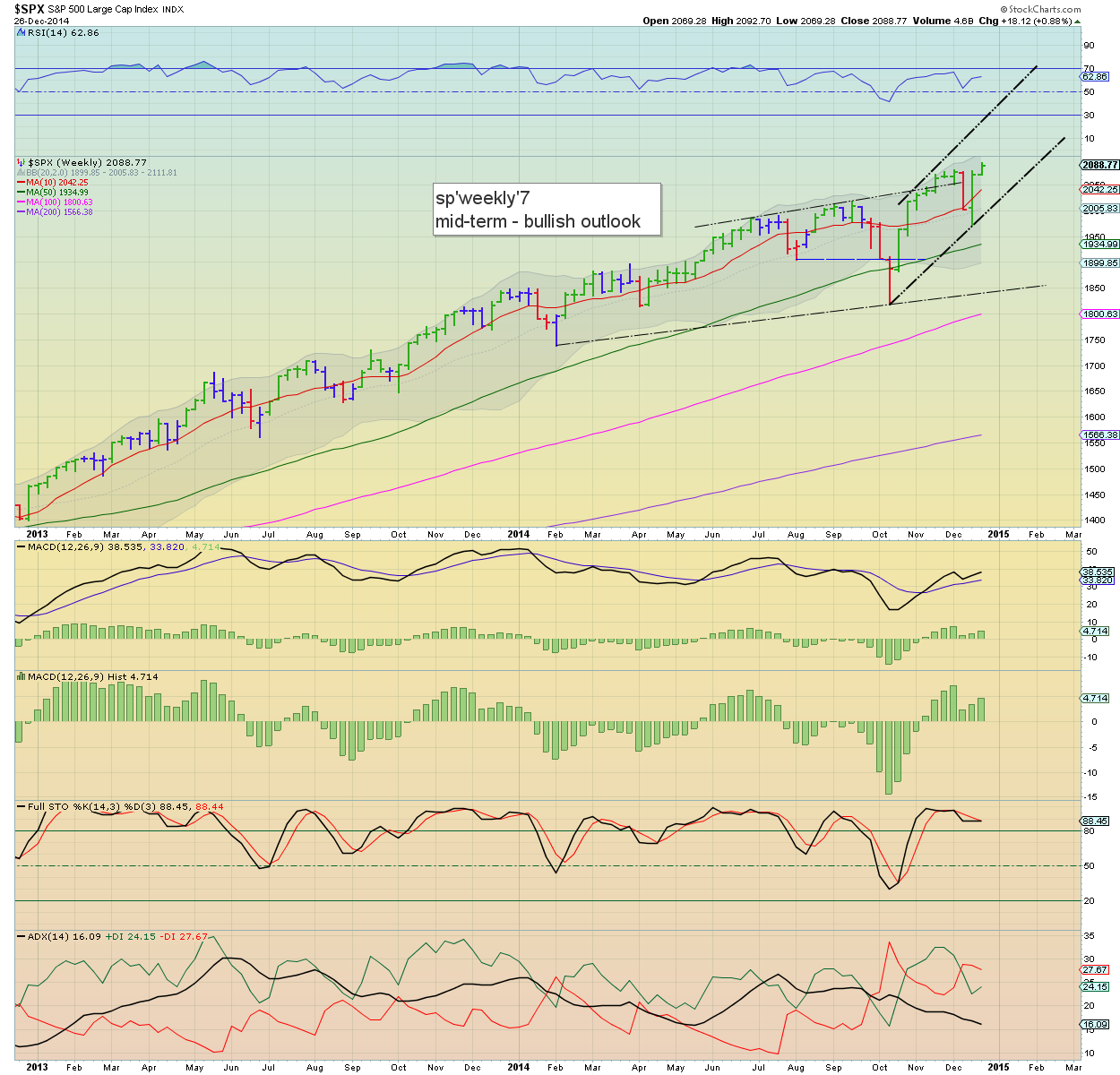 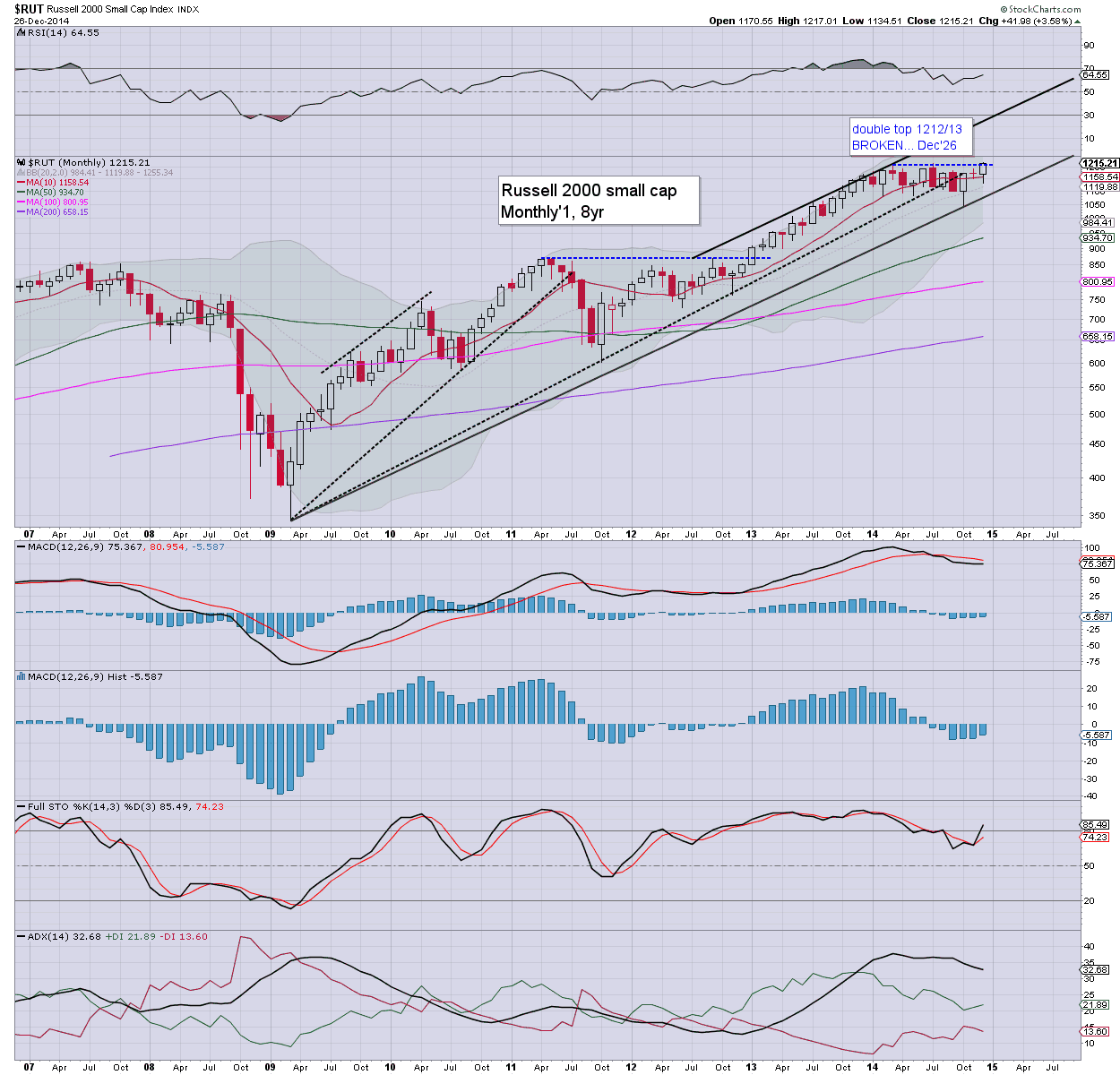 *the second consecutive weekly green candle on the sp'500 'rainbow' chart... there is simply nothing bearish here. It is notable that the upper bol will be offering the 2115/20 zone by end year.
--

Since the big turn in mid October, the market has achieved net weekly gains for 9 of the past 11 weeks. There is no sign of this latest up wave ending.. and indeed.. the 2130/50 zone looks a relatively easy target by mid/late January.

Have a good weekend... and goodnight from London

--
*the weekend post will be on the US weekly indexes
Posted by Trading Sunset at 04:00:00
Email ThisBlogThis!Share to TwitterShare to FacebookShare to Pinterest 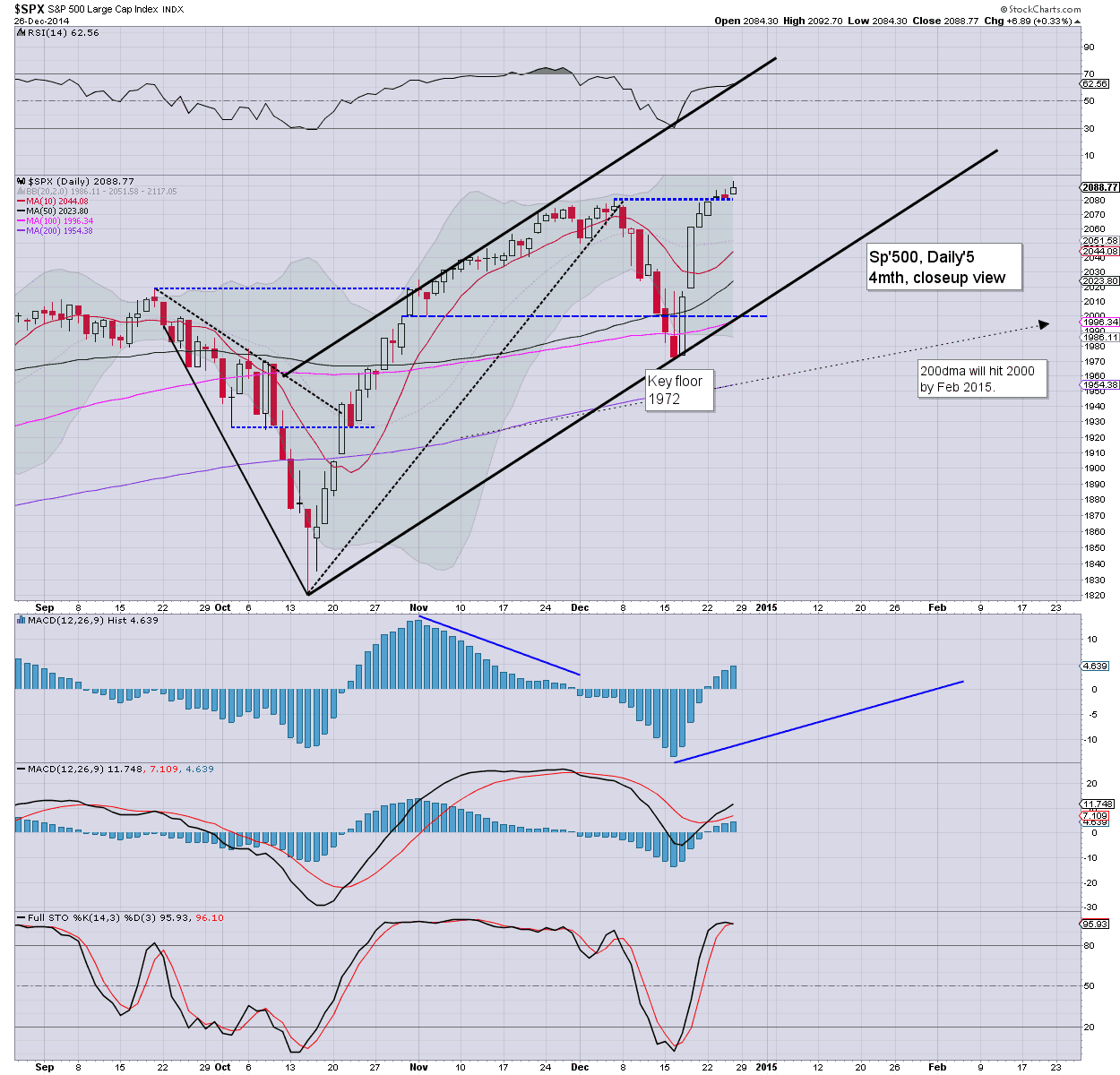 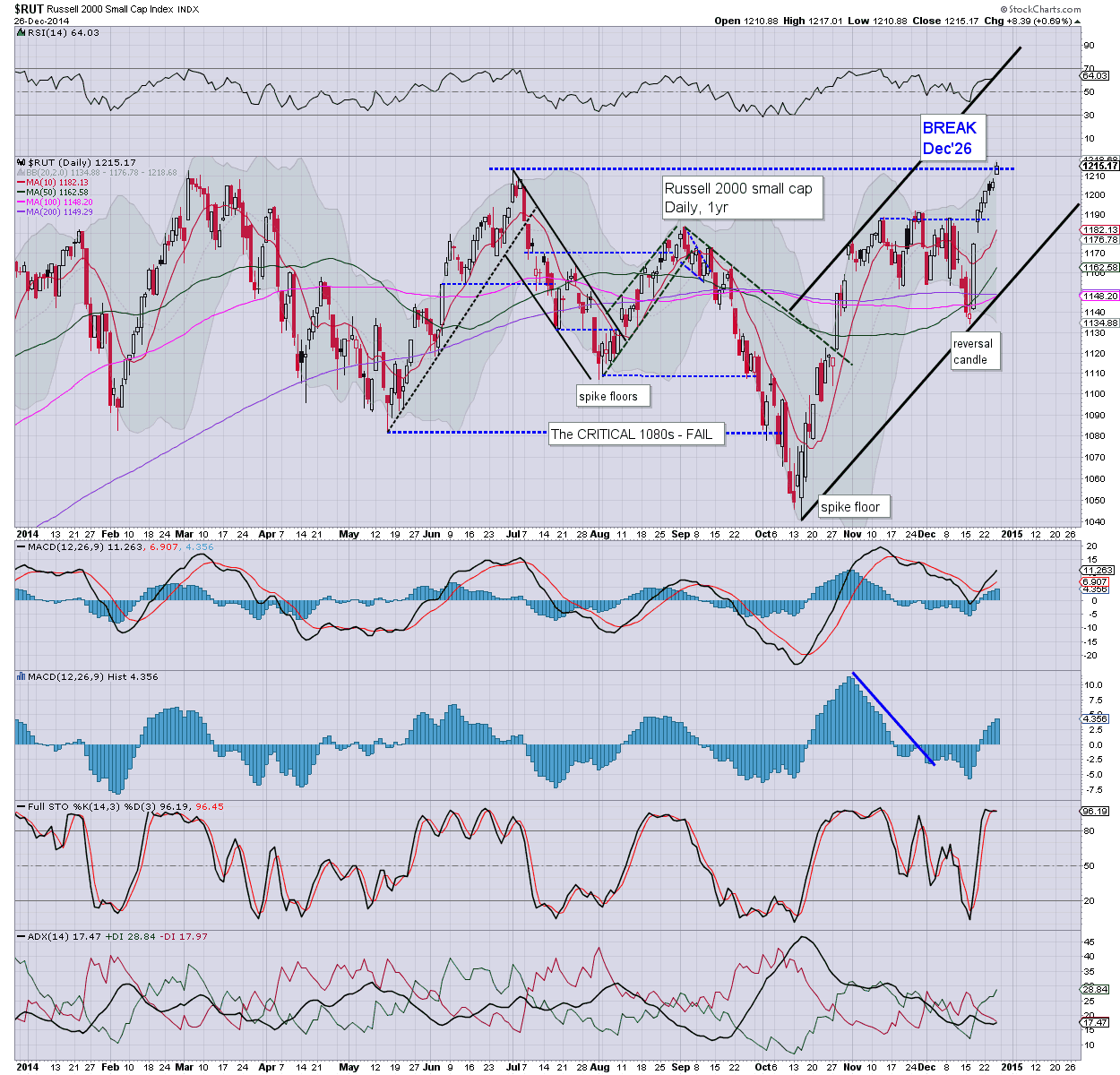 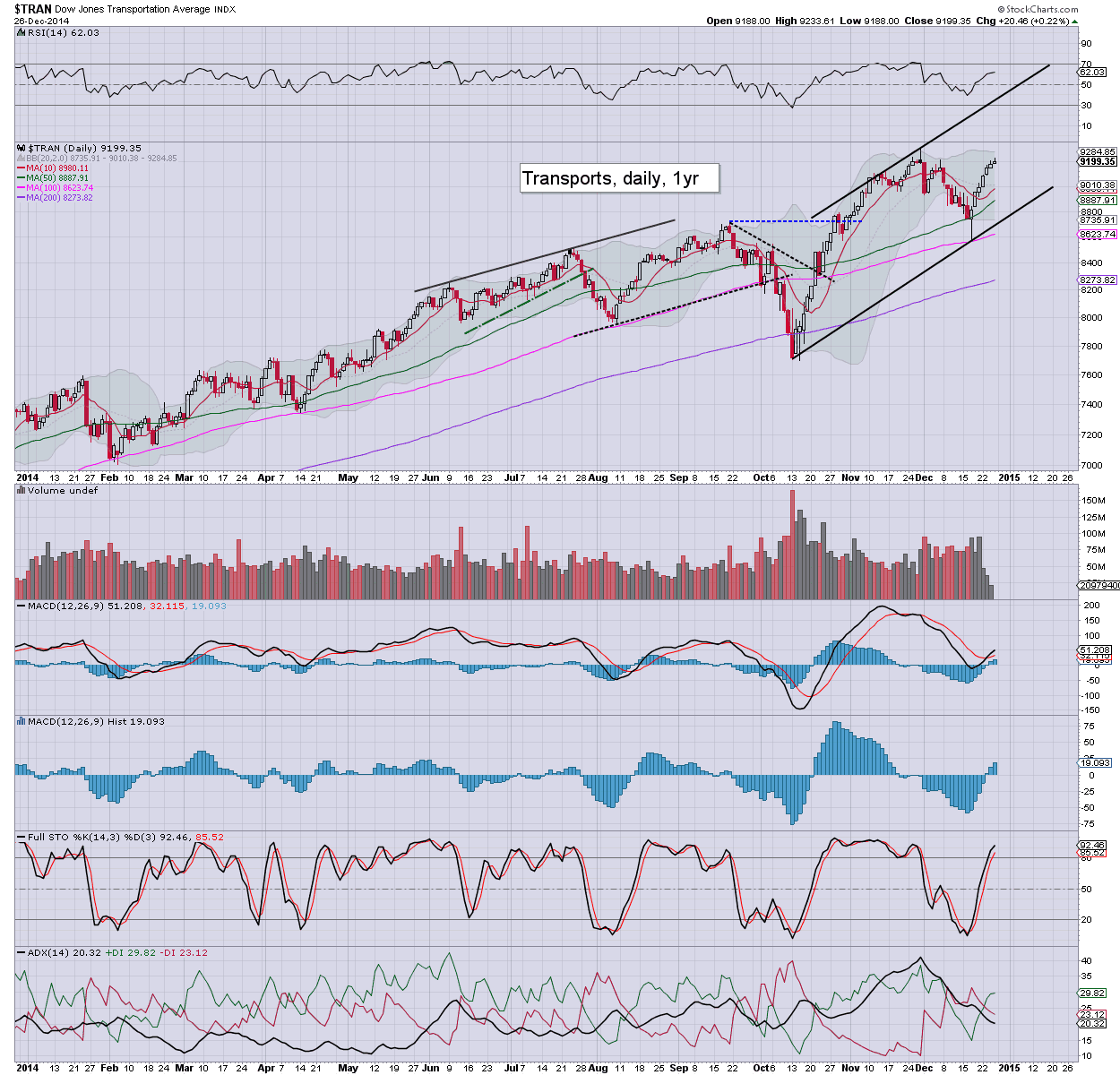 *most notable today.. if not perhaps the entire year, is the R2K, which has finally broken the double top of March/July (1212/13). The break should be seen as a powerfully bullish signal, that is highly suggestive of sp'2500 this year.. if not much higher.

On any basis, ALL cycles remain outright bullish.