The US indexes climbed for a third week, with the sp +15pts (0.9%) @ 1759. The short, mid, and long term trends are all outright bullish, and the sp'1800s now look likely in November. So long as the market is kept fuelled via QE from the Fed, the upward trend looks set to continue.


Lets take a look at the usual six US indexes 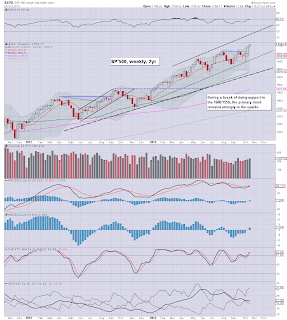 The spike floor candle of two weeks ago was indeed a clear warning to the equity bears that the market was set for another multi-week up wave. Underlying MACD (blue bar histogram) cycle is now positive, and could easily tick higher for another 2-3 weeks. There will be some serious resistance in the 1820/30 zone by end November. The 1900s look 'briefly' possible on a brief 'pre-Christmas spike', before significant year end profit taking. 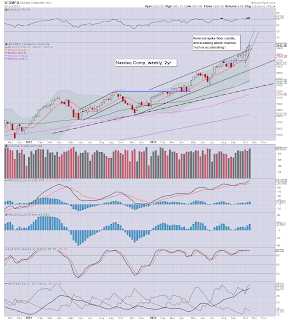 The tech gained 0.7%, and remains in an accelerated upward trend. The big 4000 level looks set to be hit within the next week or two. The only issue the bull maniacs need ask themselves...'is the 2000 tech bubble' peak in the 5100s viable in 2014? 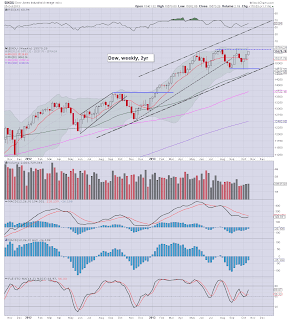 The mighty Dow continues to lag, but still managed gains of 1.1%. It will be very important for the bulls to see the Dow break into the 15800s, which will be plenty enough to confirm the strength seen in other indexes. 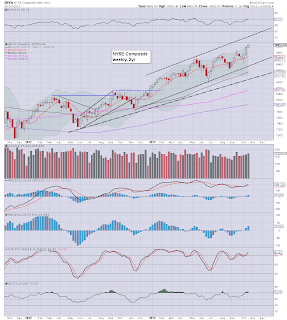 The master index has broken into the 10000s for the first time since Oct'2007. There is simply nothing bearish here, and the next upside target is around 10200/300 by late November. 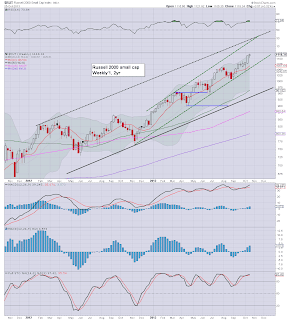 The second market leader gained just 0.3% this week, but still, the trend is unquestionably still broadly strong. Next upside target is around 1175/1200 by late Nov/early December. 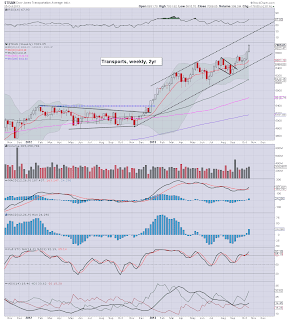 The old leader is still leading the way, and gained a very impressive 2.6%. Part of the reason is that transport stocks are rallying on lower Oil/Gasoline prices. The tranny is now in the 7000s, which was a level that looked like 'crazy talk' in the early spring. My hyper-bullish outlook would have the tranny peak around 7500/750 next spring, before some kind of a very significant decline - in the style of summer/autumn 2011, perhaps all the way down to the 5500/5000 zone.

Unquestionably, the up trend continues, as seen even more clearly on the bigger monthly charts. With the market surviving the often difficult trading month of October, I think any significant retrace is now off the table, and I don't think we'll see sub sp'1700 for the remainder of the year. 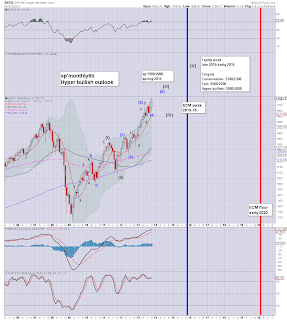 It is pretty disturbing to consider that even if we see a major 20% drop next year, QE will surely continue to a large extent, and the market will simply resume the ramp for another year or two. Right now, sp'2500 by late 2015 looks a relatively easy target.

Next week will of course be all about the FOMC, where an announcement is due on Wednesday at 2pm. I do not expect any change in interest rates (as if!) nor the QE of $85bn a month. The Fed are an overly cautious group, and as the mainstream are also starting to realise, 'taper' is almost certainly off the agenda until spring 2014.

There is some econ-data each day of next week. However, the monthly Oct' jobs data - due Fri' Nov'1, is delayed until Nov'8.

*there is heavy QE-pomo of $4-5bn on Monday, and then nothing until at least Friday.
--

At the very least, with ongoing QE I have to assume the market will broadly continue to rally into November. Baring some bizarre surprise via the FOMC, the sp'1800s look a given for November. Yes, we're overbought in the near term, but we've seen plenty of up waves where the market will just keep on grinding higher for many weeks...and months.

Another week for the equity bulls

It was the third consecutive weekly gain for the US equity markets, and the sp'1800s now look very viable in November. If the market likes what it hears from the FOMC next week, there is literally zero reason why the market won't rally for at least another 2-3 weeks, if not considerably longer. 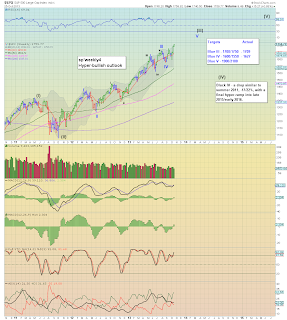 Another week for the equity bulls, and the hyper-bullish outlook remains on track. Considering a likely 'Santa rally' and 'green shoots of spring', along with the continuing Fed QE, I think there is a very high probability we'll just battle broadly higher for another six months. I realise some of the remaining bears are still in denial that QE causes direct or indirect upward pressure on the US equity market, but hell...the above chart is pretty clear.

The only two significant market declines since the March 2009 low have been during the brief periods when the Fed has not been throwing tens of billions at the market each month. How hard is that to finally accept? 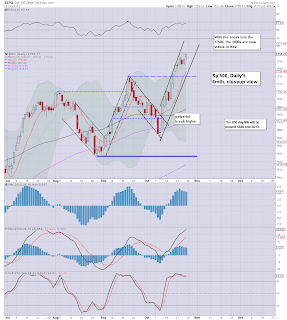 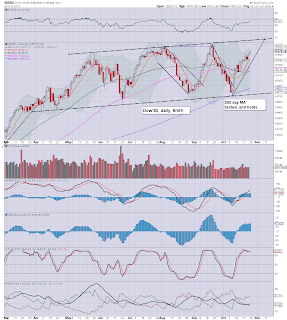 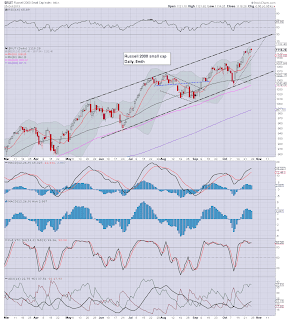 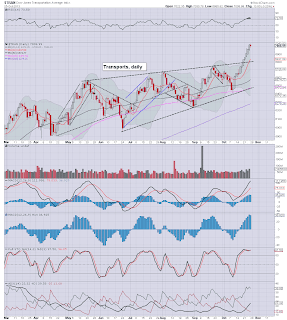 Even the closing hour micro-spike was enough to break a new historic high for the sp @ 1759.82.

There is simply nothing bearish in the immediate term, and we could easily battle higher for another few weeks, if not into December.

Certainly, as I noted yesterday, equity bulls should be seeking the Dow in the 15800s to confirm the strength seen in other indexes. However, I'm sure that is just a matter of weeks away, rather than 'if'.