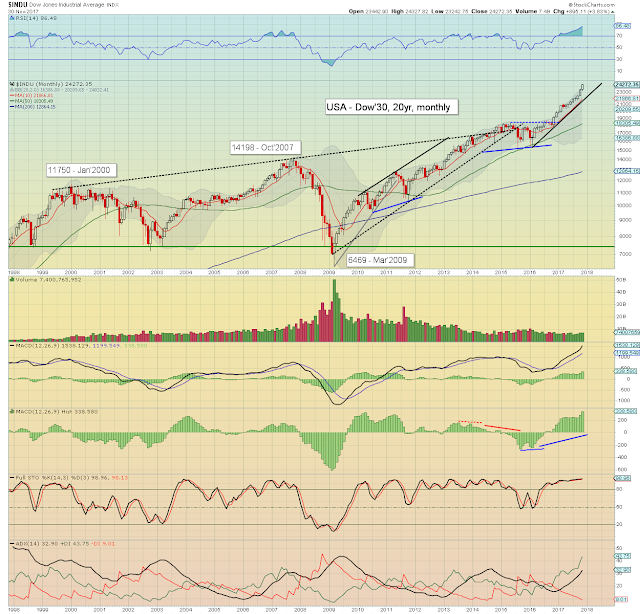 Best guess: continued broad upside into end year, and across 2018. Soft target 25/26k. It should be clear that earnings and econ-data are supportive of higher levels. The psy' level of 30k is a valid target in late 2018.

Equity bears have nothing to tout unless a bearish monthly close. For me, that would equate to a monthly settlement under the key 10MA. I do not see that occurring for a very considerable time to come.
-- 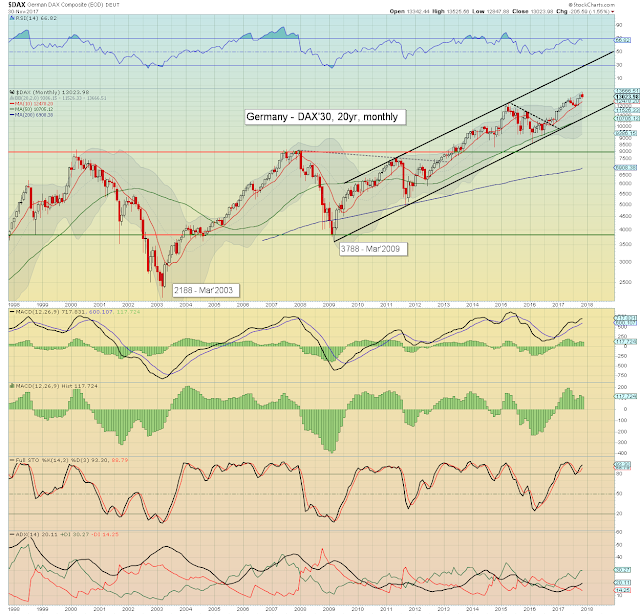 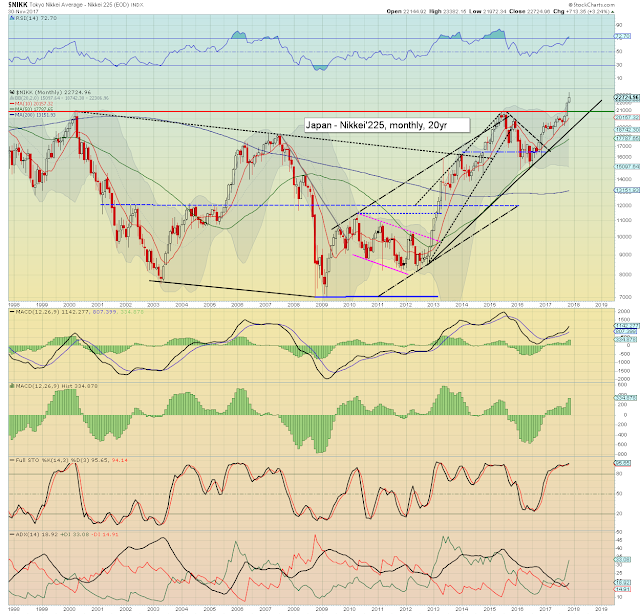 The BoJ fuelled Nikkei settled higher for a third month, +713pts (3.2%) at 22724. The second monthly close above 21k is very significant. It gives credence to the notion of a massive multi-year breakout. Soft target is 25/26k, and then the Jan' 1990 historic high of 38915, which is 71% higher. It should be clear, the BoJ QE program is not going to end. The underlying problem of a demographic collapse is the real issue, but one few wish to speak about. Having never been to Japan I can't say from experience, but I imagine the subject is largely taboo. 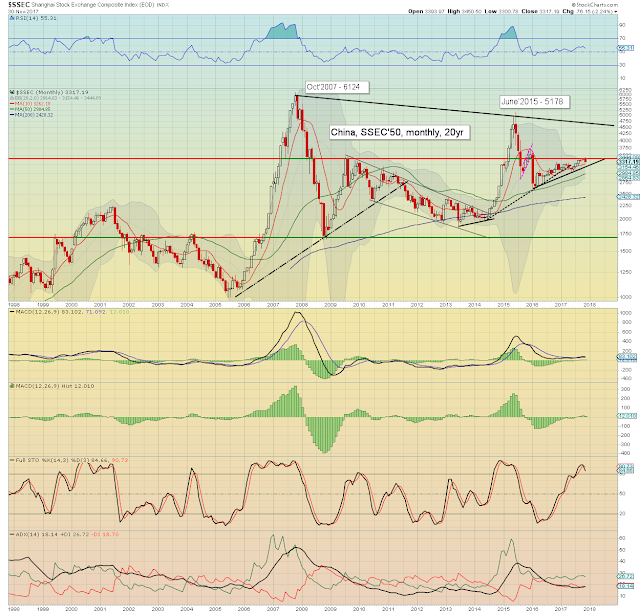 The Shanghai comp' is struggling, settling -76pts (2.2%) to 3317. There is huge technical resistance in the 3400s. Price action since mid 2016 is very choppy, but still leaning on the upward side. Bullish clarity >3500, bearish if <3200. Based on other world markets, I'm leaning on an eventual upward break. Clearly, the communist leadership will want higher prices to placate the masses, but they will no doubt be concerned of another bubble and subsequent burst as last seen in summer 2015. 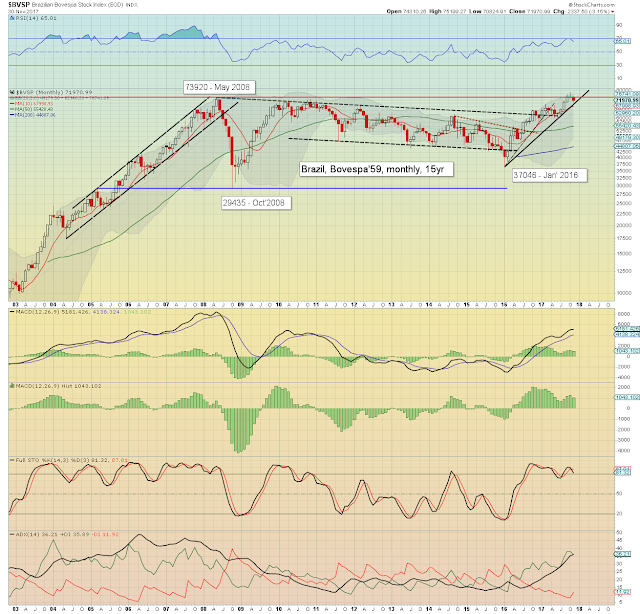 The Bovespa saw the first monthly decline since May, settling -2337pts (3.1%) to 71970. The m/t bullish trend from early 2016 remains intact. It remains important to keep in mind that the 2008 historic high was taken out in October, which has opened the door to a grander run to 100k within 2-3 years. Things would turn provisionally bearish with any sustained action <68k. 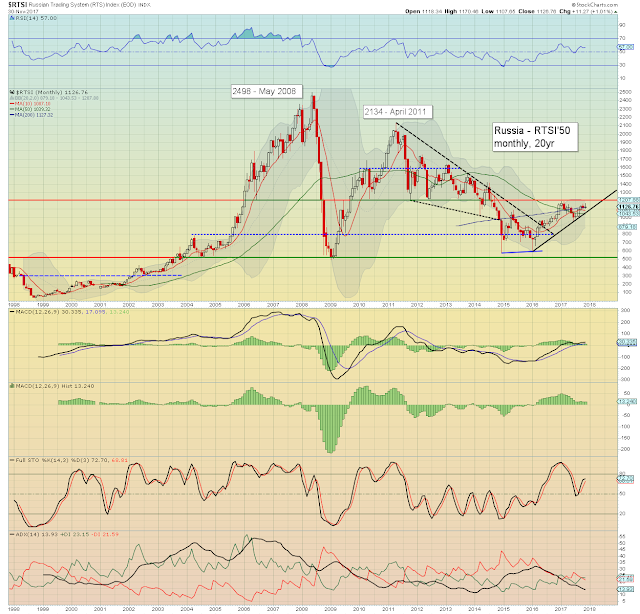 The Russian equity market saw a month of chop, settling +11pts (1.0%) to 1126. The 1200 threshold remains massively important. For now, the mid term bullish trend from Jan'2016 remains intact, and an upward bullish breakout >1200 appears due. Higher commodity/energy prices would really help 'inspire' such a breakout, with next key upside resistance of 1600/700. 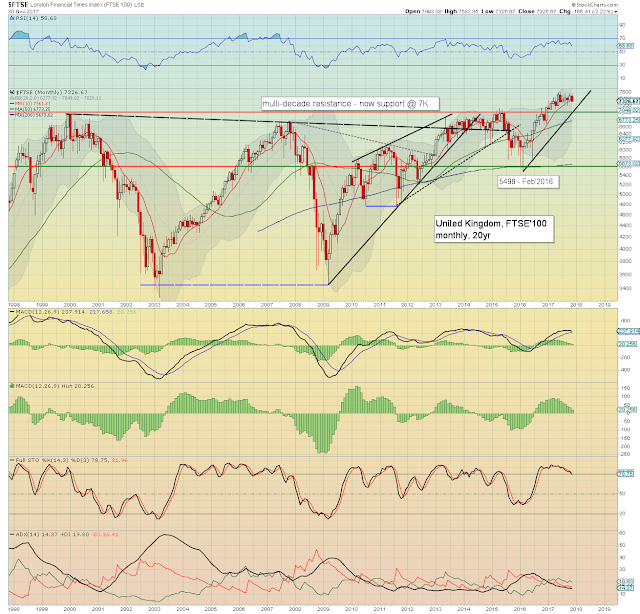 The UK market settled -166pts (2.2%) to 7326. Price action has been very choppy since May. So long as the 7k threshold is not broken back under, the m/t outlook is bullish, with soft target of the 8000s. The 9000s would be a valid target by end 2018. However, the UK does face some of the greatest societal/political uncertainty of all world markets.

The UK economy is struggling, with GDP only around 1.5%, and it really wouldn't take much to knock the UK economy into a mild recession. The coalition leadership - lead by May, is very weak, and another election is highly probable in 2018. As things are, there is little doubt that Corbyn (Labour party) would win. Most should be well aware that Corbyn is an outright communist, but that is indeed the type of leader a large percentage of the UK populace are now seeking. Capitalism is increasingly seen as the problem, and the path ahead is very much shrouded in shadows. Capital outflows are a serious threat across 2018-19, especially if Corbyn does take power, along with an exit from the EU. 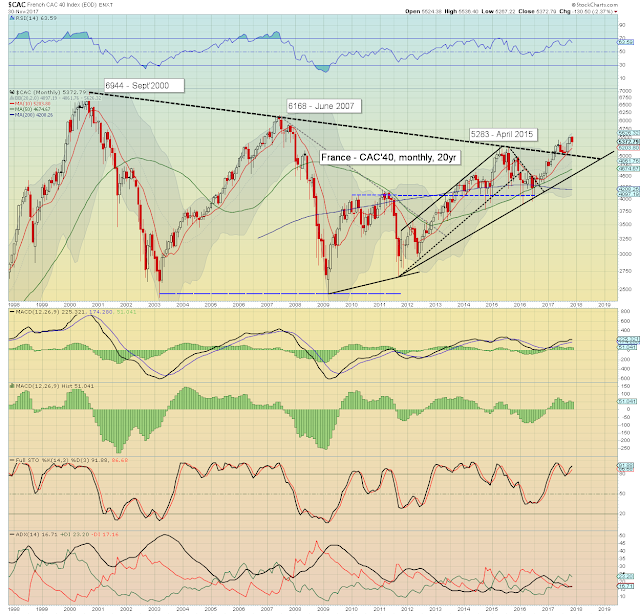 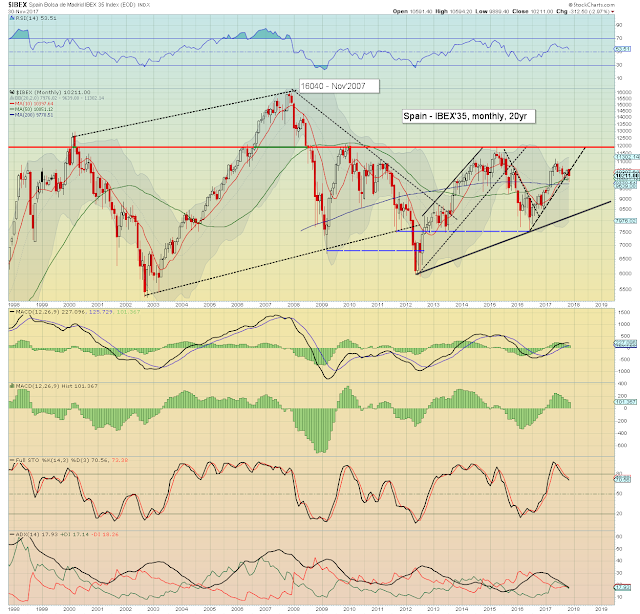 The Spanish market saw some powerful swings, settling -312pts (3.0%) to 10211. There was an intra low of 9889, as the 'Catalan situation' rumbled on. Recent news reports are quite clear, the uprising has been significantly quelled by the Spanish govt. Price structure in the IBEX is a viable bull flag. Soft target is the giant resistance threshold of 12k. Any monthly close >12k will offer 15/16k within 12-24mths. 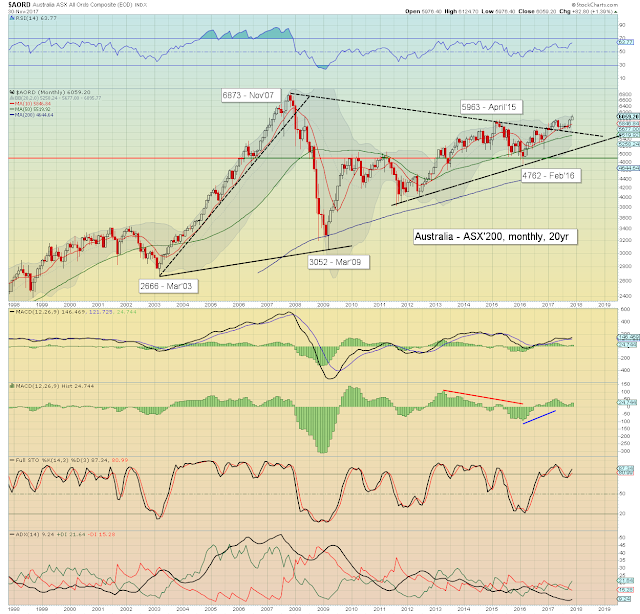 The Australian market settled higher for a second month, +80pts (1.3%) to 6057. With the 2015 high already broken, next soft target is the Nov'2007 historic high of 6873, which really isn't that far up. The Aus' market/economy are highly dependent upon commodity prices. If CRB >197s, it would have especially bullish implications for the AORD.
--

A very mixed month, with 4 markets climbing, against 6 on the decline.

The USA and Japan are leading the way higher, whilst China, UK, and Spain are struggling.

Most markets are comfortably holding their m/t bullish trends that began in early 2016.

The broader outlook has to remain bullish, not least as the US/world economy is growing. Ongoing QE from many central banks is further helping to push up equity prices, and some of that 'hot money' could be expected to find its way into lifting commodity prices.

Interest rates are set to rise (especially in the US) in 2018, but will remain at historically very low levels, and thus equities are still the prime asset class.
--

*with an FOMC Dec'13th, the usual blackout period is in effect, with no fed officials scheduled.
--