A somewhat mixed week for the US equity market. The Transports and R2K saw further gains of 1.0 and 0.6% respectively, with the rest of the market largely flat. The broad trend remains strongly upward,

Lets take a look at six of the main indexes. 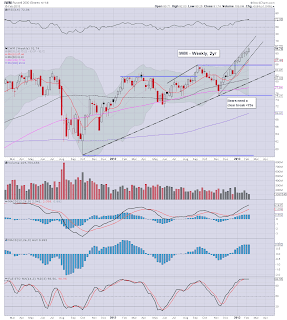 The R2K remains relentless, and has climbed 21% since the November lows - a mere 3 months ago. Incredible.

Bulls have a fair bit of downside buffer, they could sustain 89/88, before breaking the channel.

Underlying MACD (blue bar histogram) cycle is massively bullish. Even if the market were to somehow decline from here, it would take 6-8 weeks to break to a negative cycle. 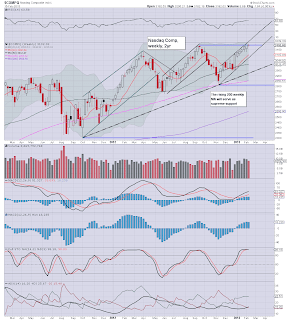 Tech' remains the weakest sector, with AAPL still greatly holding the Nasdaq back. Yet this week, the Nasdaq finally broke the old high from Sept'2012, which is an important milestone the bears need to recognise.

The broad trend is comfortably higher, bulls can sustain a 3% pull back without any damage to the current upward channel. 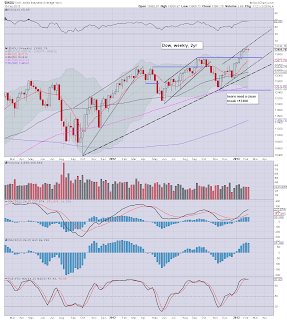 The mighty Dow closed the week fractionally lower, but the upward trend is holding. A pull back to 13700/600 would do no damage to the trend.

What is clear, bears can really only get confident across the mid-term, with a break <12400, and frankly, that seems impossible in the near term. 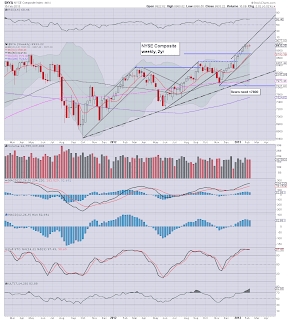 The master index closed flat on the week. Since the Nov' lows, its +14%, which is very impressive. Nothing bearish here either. 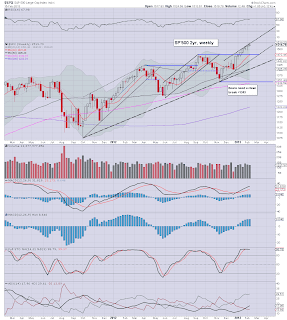 For the bulls, there is good buffer room to the downside. Even a move down to the 1460s would do no damage to what is a powerful up cycle.

Bears need a clean break under the Nov' 1343 low to have any confidence about the bigger picture. Until that low is taken out, bulls remain in complete control of this market. 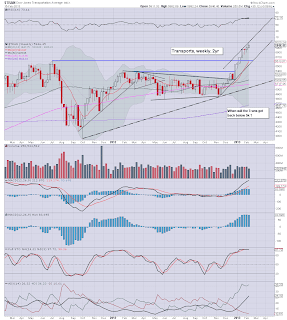 The tranny was the first to break higher in mid-December, and is showing the cleanest wave structure right now. Regardless of how you might like to count what happened from Mar'09 to Nov'2012... we are currently in some form of 'wave'3 to the upside. You can even see a sub' wave'2 in December..before the most powerful surge began.

For the remaining bears out there who are still seeking massive deflationary declines later this year, and into 2014, they should arguably look to the 'old leader'. Just as it lead the way up..it should (along with the Rus'2000) be the one to lead the way down.

I really think that is critically important to keep in mind across the next 3-6 months.

The US market continues to hold together. With new historic highs for the Transports and the Rus'2000, it has to be said..everything remains 100% bullish right now. Yes, the Dow and SP' are yet to take out their 2007 highs, but we're not far from breaking those too.

With the support of the Fed, aided by the HFT algo-bots and the cheer leading maniacs on clown finance TV, I just can't see any major declines likely for some months to come.

Despite the recent six weeks of market melt higher, I'm trying to keep an open mind about where we might go later this spring/summer, and here is one of the last remaining bearish outlooks. 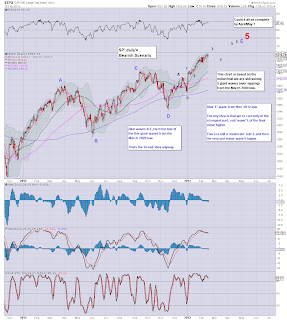 The chart is pretty self-explanatory.  Suffice to add, could it all be wrapped up by the late Spring? The problem is, so long as the Fed are printing 85bn a month..how can the market decline?


How can we decline with POMO in effect? 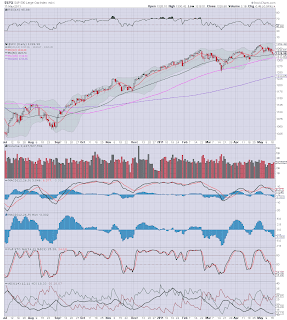 The infamous 'Bernanke @ Jackson Hole' low in August 2010, where the market reversed sharply on a Friday morning..and never looked back. We then saw six months of relentless algo-bot melt higher. There was just a very minor retracement after 10 weeks in mid-November..and then we ramped for another ten weeks into mid February. A moderate decline into March reversed, before the key cycle high of May 1'st

Just reflect on the fact, we're only at week six in this current cycle - since the initial 2 day hyper-ramp of Dec'31/Jan'2. We could easily melt higher for a few more weeks

It remains my belief* that at least 'some' of the 45bn of POMO dollars per month is finding it way from the primary (bond) dealers, into equity accounts, and is then bidding up this market...day in..day out.

--
*We'll never know for sure whether POMO had any direct/indirect effect on the market, but the historical equity charts..are highly supportive of it.  With so many variables, it will forever be an unanswerable question. Hell, I bet even the Bernanke has sleepless nights wondering if his policies are of any use.
--

Personally, I find it hard to believe we'll see any 'significant' market declines until the Fed pulls the POMO program. Right now, an end to this third round of QE seems many...many months away.

If US GDP for Q1 (issued late April) also turns out to be negative, you can be pretty confident the Fed will not only keep QE3 going, but will probably be more than pleased to increase monthly purchase amounts from 85bn to 100/125bn.

If that were to be case, then bears can forget about any 'major' equity declines for another 2-3 years.

I realise (not least the irony of it) as a self-proclaimed (economic and societal) permabear, such words are heretical. So be it.

I will return on Tuesday.
Posted by Trading Sunset at 20:30:00
Email ThisBlogThis!Share to TwitterShare to FacebookShare to Pinterest

A quiet end to the week, aside from a brief little minor decline in the afternoon, which as usual...was largely recovered by the close. The primary trend is strongly higher, although a few of the indexes are starting to look very tired...especially the Dow. 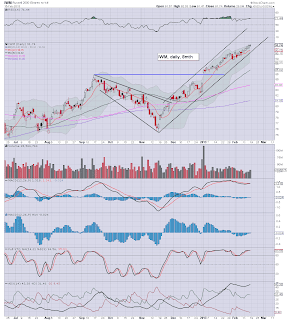 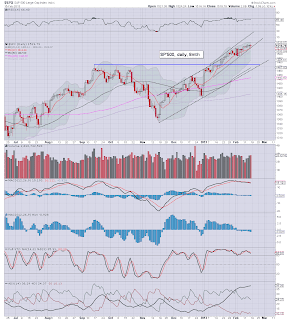 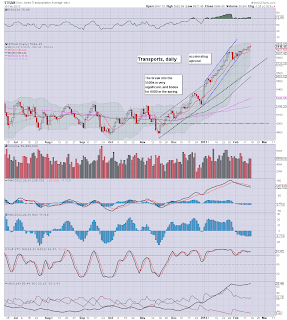 There were new highs for the Transports..and Rus'2000..yet again....it remains a relentless grind higher, and there is still no sign of it ending.

For the bears, there are a few tiny signs of an exhausted bullish market. The Dow looks really stuck just under 14k. A retracement to 13800/700 would be entirely natural, and would do no damage to the primary trend.

A more significant retracement looks as distant as ever. Bears need something to spook this market, but from where could that come from?

*next posting, late Saturday, on the US weekly index cycles
Posted by Trading Sunset at 02:00:00
Email ThisBlogThis!Share to TwitterShare to FacebookShare to Pinterest
Newer Posts Older Posts Home
Subscribe to: Posts (Atom)