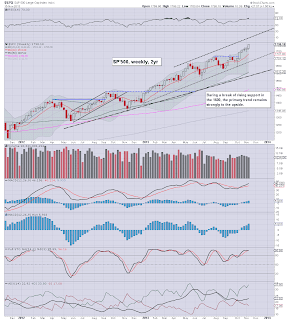 Another 1.5% higher for the sp'500 , and the 1800s look a given next week. Underlying MACD (blue bar histogram) cycle is accelerating to the upside - as it is for all indexes, and there is little reason to believe the market won't claw higher for another week or two.

Next target is the 1810/30 zone, which seems viable before end month. The 1900s do not look likely before year end. Baring a break under the recent low of 1760..and the rising 10MA, the bears have absolutely zero hope in the near term. 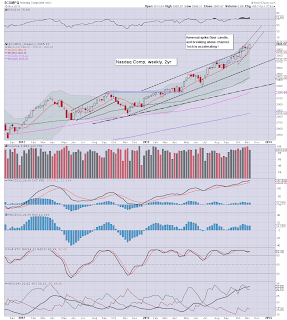 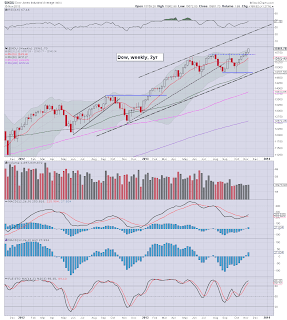 The mighty Dow has met my key target of the 15800s, and the weekly close of 15961 is extremely bullish. 16k is now a given, and arguably, 17k by late spring is also..a given. Having been stuck in a tight range for around six months - which looks like a giant bull flag on the monthly charts, the Dow looks set to battle higher. 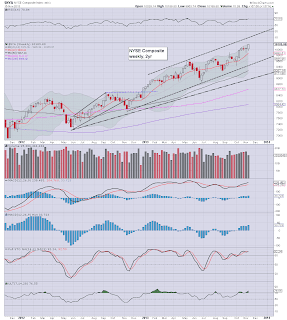 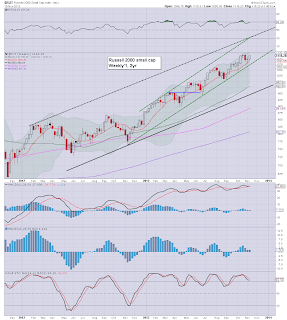 The second market leader remains in the strong up trend from Nov'2012. The 700s now look bizarrely low, and that was just a year ago! Near term upside to 1150/75, with the 1300s viable by late spring. Absolutely nothing bearish here. 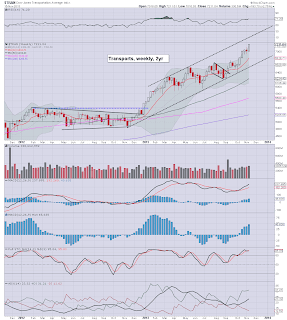 All indexes saw significant gains, and there is unquestionably a strong likelihood for another week or two higher in the current wave. General upside into year end is likely, and a yearly close somewhere in the sp'1800s seems very probable.

The following chart that I originally posted many months ago looks disturbingly on track. 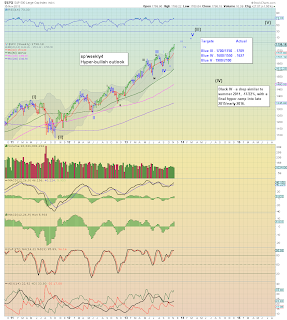 Effectively, equity bears have another 4-6 months to wait until the current multi-month wave completes. Seasonally, this would very much be the norm, with a general rally into the spring, before the first real opportunity of a significant wave lower.

There is not much due next week. Only Wednesday has anything important, with retail sales, and the FOMC minutes. There are fed officials on the loose across the week, any of which whose comments could easily be used by the market to 'inspire' prices.


Another week for the bulls

Clearly, almost everyone is now on the 'market to da moon' train. Yes, that in itself is often a contrarian signal, but really, the QE continues. Have we not been through the latter issue enough?  Best guess, further gains into the sp'1810/30 zone this week, before a very slight pull back...1-2%, and general gains into year end.

For the remaining doomer bears out there, primary objective remains (especially for those who can't stomach going long at current levels) to do nothing..and merely be on 'trading account survival mode'.

I'll sure as hell be ready for the next intermediate top (which I'm guessing is spring/summer 2014)...I hope you are too!

back on Monday :)
Posted by Trading Sunset at 17:26:00
Email ThisBlogThis!Share to TwitterShare to FacebookShare to Pinterest

Whilst equities continue to battle to new historic highs, commodities remain weak. In particular, Oil and Copper - usually good indicators of the broader economy, are very low relative to equities. The CRB/Sp'500 disparity continues to grow. 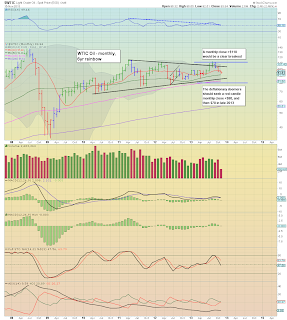 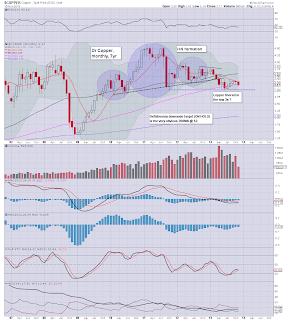 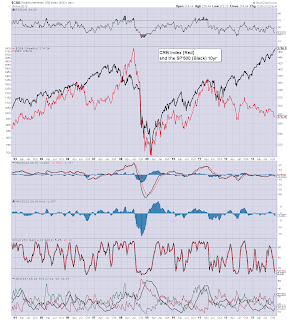 It has been another difficult week for the equity bears (not that I've been shorting the indexes)...so I'll keep this post short.

On one side, weak Oil/Copper prices are normally a bearish sign, but...it has to be said...on the flip side..lower prices help to increase profit margins for the manufacturers, never mind the general retail economy.

With the Fed kicking up the equity market via continued QE, it would seem we'll see a rare instance where Oil and Copper fall (or at least flat line) but with equities continuing to push upward.

Of course..it won't last forever. I remain looking for a key equity intermediate top in spring 2014.

next post: late Saturday, on the US weekly indexes.
Posted by Trading Sunset at 04:00:00
Email ThisBlogThis!Share to TwitterShare to FacebookShare to Pinterest

The main indexes closed moderately higher, with the sp +7pts @ 1798. The two leaders - Trans/R2K, closed +0.7% and 0.4% respectively. Near term trend remains bullish, and the current wave looks set to reach somewhere in the sp'1810/30 zone within a week or two. 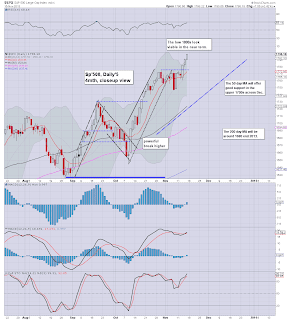 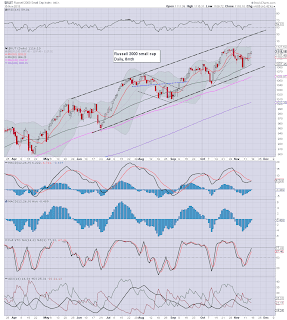 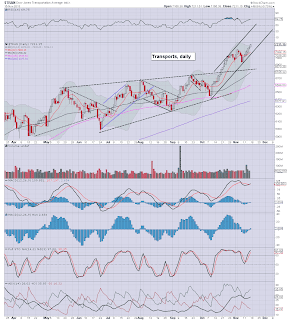 There is little to add..trend is strongly to the upside...and next week will likely see further gains. The price action/structure in all indexes is very bullish.
--