With equity indexes seeing moderate chop across the day, the VIX remained broadly subdued (intra low 16.78), settling -3.4% @ 17.09. Near term outlook offers a test of the psy' level of sp'2K, which will likely equate to VIX 15s. 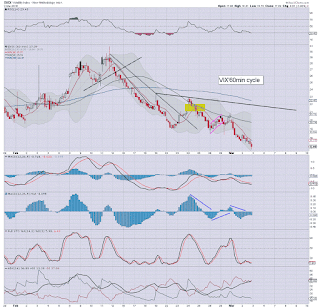 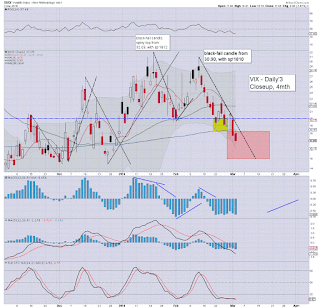 As equities continue to battle upward, the VIX remains in classic melt mode, already breaking into the 16s.

It would seem VIX 15s will be hit if sp'2K this Friday.

Broadly, VIX looks set to remain subdued for another two weeks. Certainly, VIX 30s look out of range until end month, if not mid April. 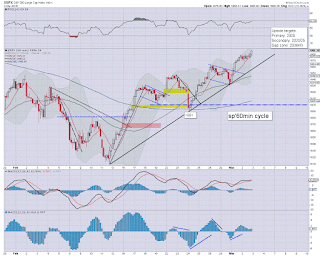 Closing hour action: micro chop... but leaning on the upside, breaking a new cycle high of 1986.
--

The drama of CHK made for one interesting closing hour on clown finance TV, and ironically, CHK stock managed to hold very significant gains of around 23%.

As for the broader market... underlying momentum remains strongly bullish, and it will likely take at least two more weeks for the bull maniacs to exhaust themselves.

Considering a bullish MACD cross on the big weekly cycle is now imminent, there seems little reason to get involved on the short side until after the ECB and FOMC meetings are out of the way.

--
more later... on the VIX
Posted by Trading Sunset at 21:00:00
Email ThisBlogThis!Share to TwitterShare to FacebookShare to Pinterest

Regardless of the exact close, the near term outlook offers further upside to the sp'1990s.. if not a test of the giant 2K threshold this Friday. Rising support will be around 1955 at today's close, and 1980 by the Friday close. For now.. equity bears look powerless ahead of the ECB and FOMC meetings. 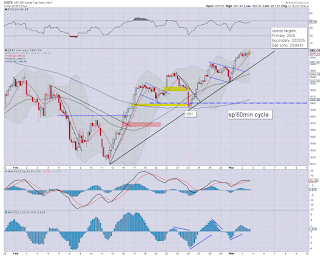 Clearly there is threat of weakness ahead of the jobs data, but broadly, it'd now be surprising if the market didn't test 2K in the near term. 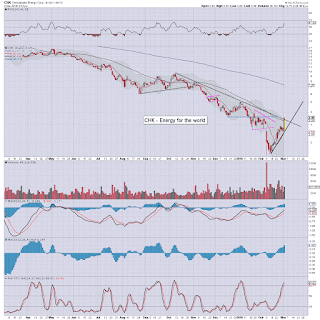 .. but it remains an obliterated stock.. having imploded from last summer. 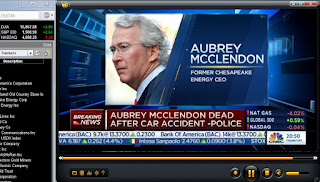 Whether suicide, murder, or just a plain old accident, CHK is now even more complicated.

You know its a big story if they drag the Cramer on... 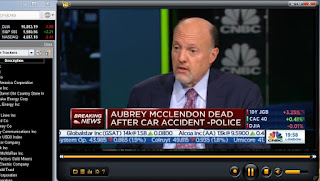 --
back at the close
Posted by Trading Sunset at 19:53:00
Email ThisBlogThis!Share to TwitterShare to FacebookShare to Pinterest

With US equities battling for a marginally positive close, the VIX remains subdued, and continues to melt lower, currently -1.7% @ 17.40. Metals have managed to build gains, with Gold +$10 and Silver +0.8%. Oil is helping the broader market mood, currently u/c in the $34s. 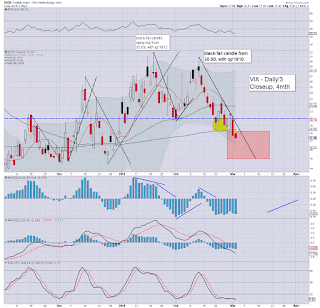 Little to add.. on what is a mere consolidation day before renewed upside.. whether tomorrow or Friday.
-- 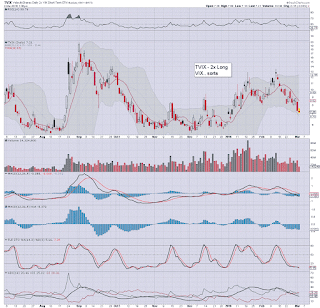 Despite some moderate weakness, US equities look broadly strong, headed for the sp' 2K threshold, with best bull case upside to the 2020/40 zone by the FOMC of March 16th. VIX remains subdued, having earlier hit 17.51. Metals are holding gains, Gold +$8, but still looks vulnerable into mid March. 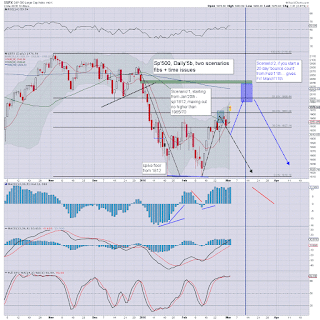 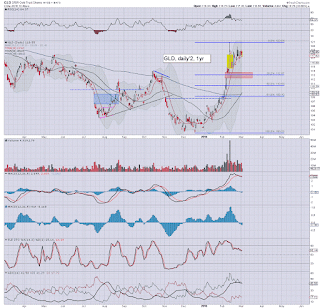 Considering yesterday's giant gains, the market is arguably in consolidation mode... before the next push to the 2k threshold.
-- 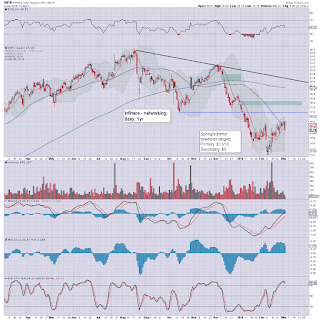 It seems there is no real news.. its just cooling from the 50dma
--

With oil turning positive, currently +0.6% in the $34s, US equity indexes have naturally followed, with the sp'500 breaking a new cycle high of 1980. The giant psy' level of 2K will be viable as early as tomorrow, but more probable on Friday. Despite current gains: Gold +$7, the precious metals look highly vulnerable into mid March. 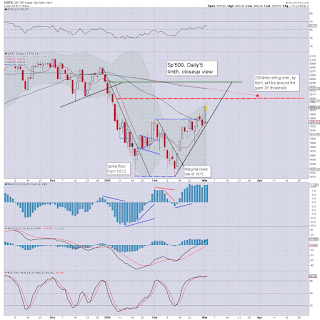 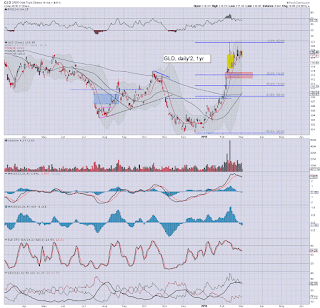 Anyone still trying to short ahead of the ECB (March 10th) and the FOMC (March 16th) is arguably way too early.

There still seems no hurry.
--

*seemingly taking a week off*

--
time for lunch
Posted by Trading Sunset at 16:56:00
Email ThisBlogThis!Share to TwitterShare to FacebookShare to Pinterest

11am update - another monstrous oil surplus

The latest EIA report showed a net weekly surplus of 10.4 million barrels. For the moment, the market doesn't particularly care, with oil lower by just -1.3% in the $33s. Most indexes look prone to turning positive into the afternoon, and continue clawing toward their respective 200dmas. 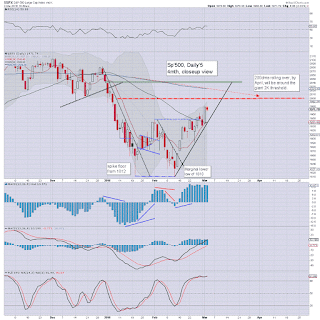 The oil surplus really shouldn't come as a surprise, as supply is NOT being cut anywhere. Indeed, many recognise that there is potential for further supply coming online before end year.

Capitulation in WTIC oil is under $20. 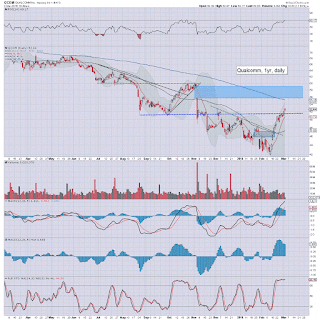 Clearly headed for the gap zone.. where the 200dma is near. QCOM is just one of dozens of individual stocks I follow, ALL highly supportive of the notion of the sp'2020/40 zone.. before the next rollover.
-- 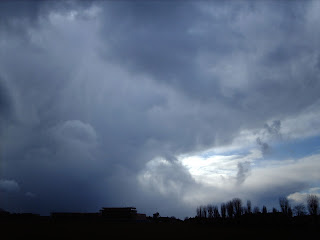 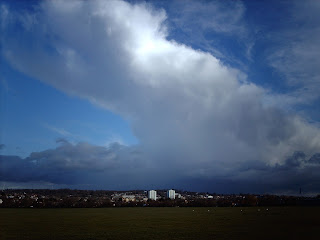 A rather fierce icy wind... with stormy showers.
-


11.05am... and the indexes turn green... already.
Posted by Trading Sunset at 15:51:00
Email ThisBlogThis!Share to TwitterShare to FacebookShare to Pinterest

10am update - no downside power

It remains the case that the equity bears are largely powerless.. with most indexes opening just a little lower. Net daily gains are clearly viable, and regardless of today, a test of 2K looks inevitable, if not the 2020/40 zone by the FOMC of March 16th. 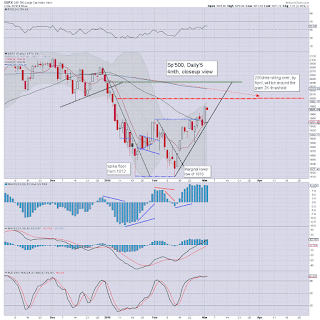 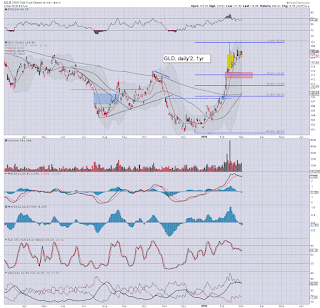 re: Gold. Still looks due to retrace to the red zone. There is a clear 10 trading day window... and even though I've a target of GLD 125 (aka Gold $1300)... there seems little reason to get involved right now.

Cyclically, we've already ticked lower... and its indicative of just how powerful the recent rally was.
--

As for equities, its kinda embaressing that the equity bears can barely muster a moderate retrace lower, after what were super strong Tuesday gains.

Instruments like TVIX/UXVY will surely melt lower across the next two weeks. There is likely no hurry on the next volatility-long trade.
--

time for some sun... back soon
Posted by Trading Sunset at 14:56:00
Email ThisBlogThis!Share to TwitterShare to FacebookShare to Pinterest 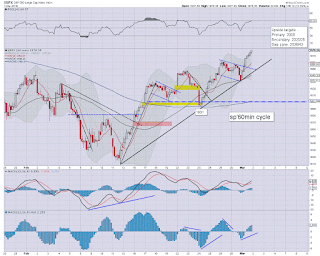 *ADP jobs: 214k.... 'reasonable', something for the econ-bulls to be relieved about. Ironically, the cheerleaders on clown finance TV are now wondering if the Fed might raise rates at the next FOMC in two weeks!
--

It does seem though, the market will continue to battle upward. Its just a matter of whether 2K is hit this week... or next.

--
Have a good Wednesday
Posted by Trading Sunset at 13:20:00
Email ThisBlogThis!Share to TwitterShare to FacebookShare to Pinterest

With Fed official Dudley touting no threat of any rate hikes in the near term, the market opened higher, and built gains across the day. The mainstream are naturally getting increasingly confident about the rest of 2016. After all, with the sp'500 set to move above the 2K threshold, everything is fine again, right? 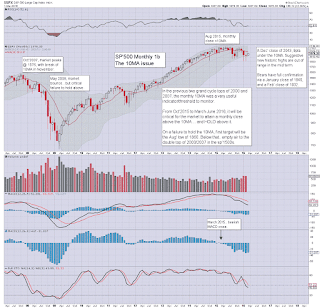 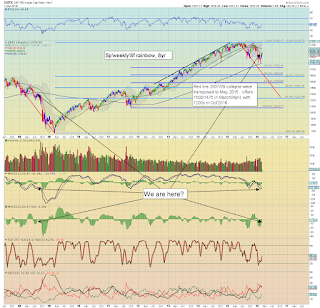 Again, it is highly notable that the February close was weak, making for the third consecutive net monthly decline.

We have the monthly 10MA at 2011, and that will be prime resistance across March.

Equity bears must see a March close under the 10MA.. if not preferably under the Feb' close of 1932.

re: weekly8f. The current pattern/setup is clearly similar to summer 2008.

Every cycle is unique, and there are many differences of course from summer 2008, but still... in theory, the next down wave should be the most powerful..and take us to at least the low 1600s...testing the double top of 2000/2007. The same can be said for a number of other world markets, notably the German DAX.
--

*Fed official Williams is on the loose in early morning.
-

US equity indexes closed powerfully higher, sp +46pts @ 1978. The two leaders - Trans/R2K, settled higher by 2.1% and 2.0% respectively. Near term outlook offers further upside to the 1980/90s, with 2K more viable next week. A peak around mid March looks on track, before a critical rollover. 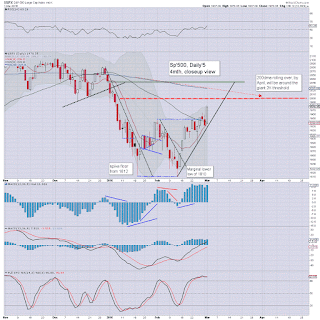 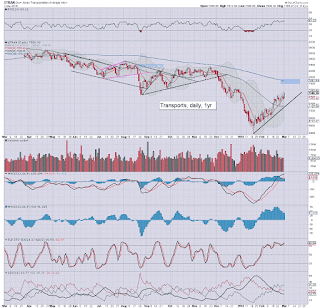 Suffice to add, most indexes look set for a test of their respective 200dmas by mid March.

From there, things should get real interesting.