With the main indexes snapping higher due to new QE, the VIX was smashed lower by 11%, closing at 14.05 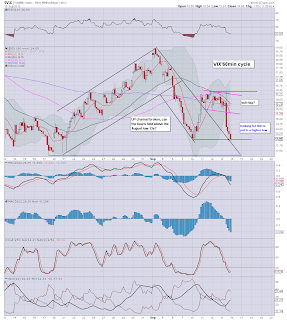 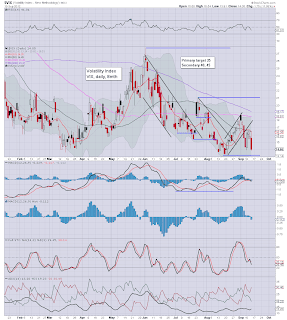 With new QE, announced earlier today, clearly everything WILL be fixed with the economy, and thus volatility collapses. I feel so much better, don't you ?

The hourly cycle has certainly not conclusively levelled out yet, and that bodes for a possible further moderate rally tomorrow morning in the indexes.

The VIX daily cycle should level out by next Mon/Tuesday. Yet, what then ? The VIX seems to struggle just to get into the high teens, never mind breaking above the big 20 level.

Clearly, the market has seen a very impressive post QE reaction, the issue now is how far down will the retracement be?  Arguably, bears need to see a break back under the recent low of sp'1397, right now..that looks an awful way down.

As things are, I am actually reasonably content, with a short from sp'1449, with a first exit target of 1420, within the next 3-7 trading days.

A strong day for the main market, with the VIX confirming the indexes with a move back into the lowly 13s.

There seems to be a little debate as to whether this is QE3, but I'd have to say it is. It is the first new money in a very long time, and I can imagine the Fed' further increasing monthly purchases sometime in 2013 when they see the US growth rate continue to weaken. 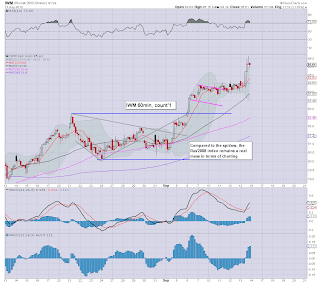 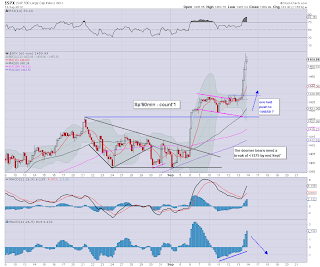 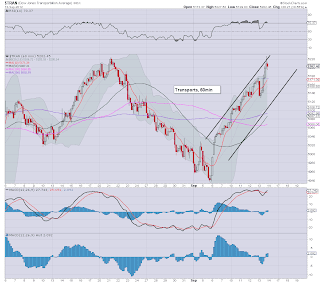 For those who have been holding short since 1400, today is just another fiercely nasty move. For those who were shorting today...even in the 1450s, today was still a pretty annoying day.

All the smaller cycles are pretty maxed out though, the only issue is what sort of a pullback do we get. Market could easily trade largely sideways for a few days, whilst this new QE is fully apprecited by the market.

More later
Posted by Trading Sunset at 21:01:00
Email ThisBlogThis!Share to TwitterShare to FacebookShare to Pinterest

The daily cycle has hit and pretty significantly exceeded my original target of sp'1445.

Frankly, the bears really need the market to close under sp'1450 today., which currently looks unlikely Anything over that, and its suggestive of maybe a further few up days in the 1455/65 range. 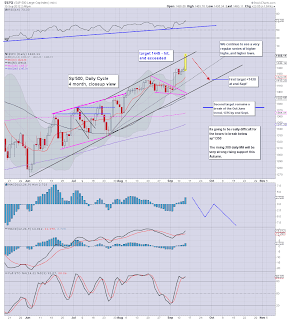 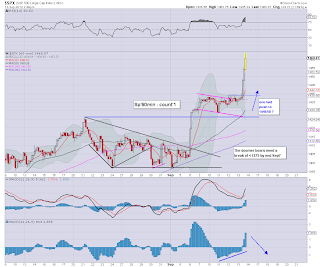 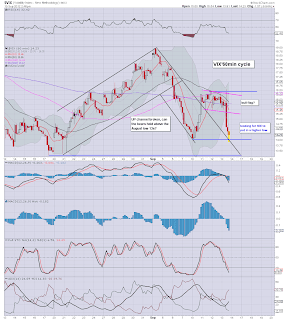 Well, Fed days are often stomach churning, and this one is certainly pretty intense. The move into the 1460s is a somewhat disturbing thing to see.

VIX fails to hold the recent low of 14.00, although it might just be a spiky floor.

With the FOMC decision done, now its time for the Bernanke to speak. 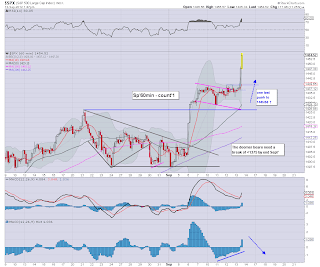 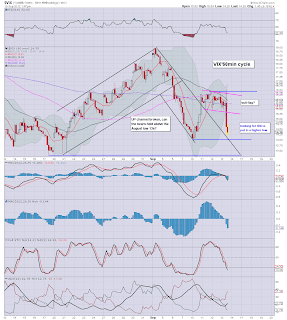 The market is certainly getting the move higher I was looking for, and has even exceeded it by 10pts to 1455. As noted a few days ago, a brief spike as high as 1460 is viable, but that should absolutely not hold.

So..all those bears who bailed at 1400 - as I did, are now getting an opportunity to re-short in the 1450s, with the ever problematic threat of QE...done.

Anyone who thinks 40bn a month of MBS purchases is going to solve unemployment and 'save' the housing market is a complete maniac.
--

Something that has to be bothering the Bernanke...bond yields are rising. So much for putting a lid on that.

back at 3pm
Posted by Trading Sunset at 18:49:00
Email ThisBlogThis!Share to TwitterShare to FacebookShare to Pinterest

So, the Bernanke begins QE3. It effectively works out at $40bn of MBS purchases a month, $480bn per year. There is no end date on the purchases I believe, but don't quote me on that.

Regardless, we're getting the upside I was looking for.

Lets give the hourly index cycles the time necessary to cycle higher..and level out. 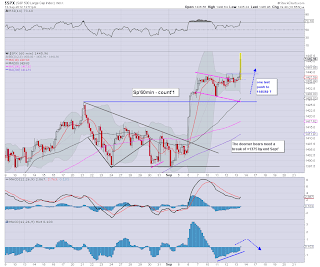 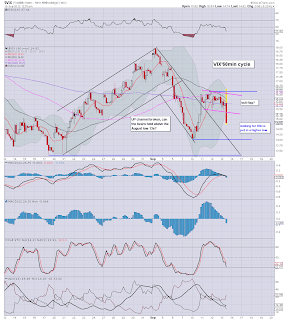 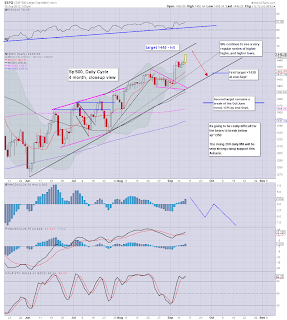 After considering the 15min cycles...

I am now heavy SHORT from sp'1449. I am very pleased with that level, and especially with the VIX in the mid 14s.

Under any basis, this should be a reasonable level to re-short from.

Good luck to everyone out there this afternoon! 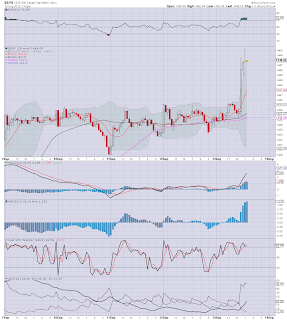 We're due to pullback on any basis.

The Bernanke is due ta 2.15pm, lets see if he can cause a little upset, and if Mr Market decides to sell the news.

After all, QE3..is done. No more threats, no more teasing..its done*

*yes, they could increase purchases, but for a few months at least, we should not really see any further 'gifts' from the Fed..

Posted by Trading Sunset at 17:53:00
Email ThisBlogThis!Share to TwitterShare to FacebookShare to Pinterest

Well, its the big hour of the month, and perhaps the year. Will Baby Ben start throwing more money into the system...we're about to find out!


Meanwhile, back at the casino... 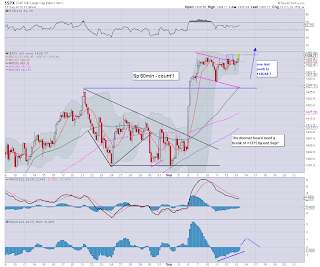 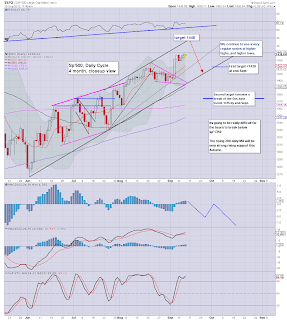 Hourly cycle is highly suggestive of at least some sort of brief spike to 1445/50 this afternoon.

Daily cycle is showing some good signs of levelling out. We're arguably very close to completing this up cycle, and I would look for at least a pullback to around 1420/00 within a few days.
--
I will look to short around 1445/50 later this afternoon.

More later !
Posted by Trading Sunset at 16:50:00
Email ThisBlogThis!Share to TwitterShare to FacebookShare to Pinterest

A quiet open to what could become an important day. VIX is mostly flat, with the hourly cycle still very prone to a major fall later today. 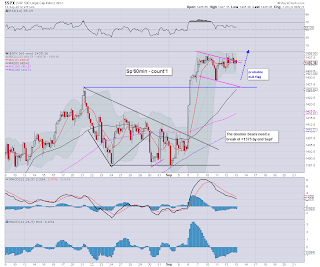 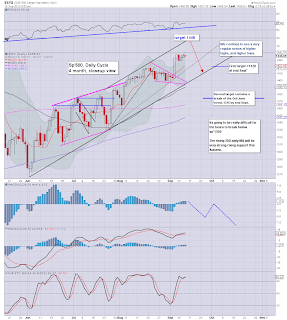 The daily chart is suggestive we're either putting in a flat top, or its a bull flag, and we're going to break higher to 1445/50 late today or tomorrow.

The hourly cycles are still negative, and this is not a good place to be shorting, not least with the Fed' still due in a few hours.
-

Back at 12pm.
Posted by Trading Sunset at 14:53:00
Email ThisBlogThis!Share to TwitterShare to FacebookShare to Pinterest

Good morning. Its a Fed day, so it will get real choppy later today. Futures are a touch lower, but sp is only 1pt lower, we're set to open around 1435.

The FOMC annoucement is 12.30pm
Fed updated econ-forecasts 2pm
The Bernanke does a press conference around 2.15pm
-- I remain looking to re-short, and very likely will today. Preferably, 1445/50

Best guess now...we briefly spike around the time of the annoucement, even if QE is not done.

Good wishes for Thursday trading
Posted by Trading Sunset at 13:49:00
Email ThisBlogThis!Share to TwitterShare to FacebookShare to Pinterest

An interesting day, the German court have made their decision, next up...the FOMC. It really is any ones guess what those bunch of economically inept printing maniacs at the Fed decide to do tomorrow. Regardless of whether they do anything, the bigger picture sure looks vulnerable to a very sizable correction. The only issue is when..and from what price level. 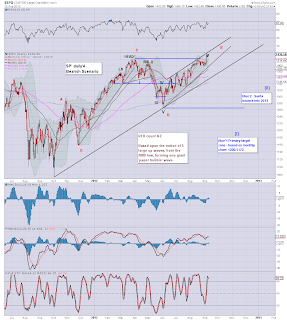 The daily chart across the last 15 months shows one hell of a rally, an up move of 362pts !

Lets consider the following truly disturbing thought, at the current trend, the sp' will be around sp'1800 by December 2013.

I suppose if the Fed really goes all-in, with the QE nonsense - and if the EU doesn't lose any members in 2013, then the market could indeed just keep on going. Its just a consideration, but one which arguably even the doomiest bear should keep in mind.


Targets for the bears

We are clearly in a strong up trend, but its very much looking like it could be a bearish wedge, one that should break to the downside at some point. Lets assume we do start to decline..what are the key levels...

*It remains my original belief (and a hope) that the Bernanke will wait to do further QE until the main market experiences a major down cycle this Autumn.


Day of the Bernanke

Thursday could indeed be the day the Fed begin their third round of QE, which might be the start of the end game. The US Dollar monthly chart is starting to rollover, and that is arguably the scariest chart for any permabear right now. Despite the lousy economy, if the dollar falls off a cliff, that'd very likely mean equities and commodities will - regardless of any economic turmoil, soar.

Moderate increases for the main indexes - confirmed with a slightly lower VIX, with the gains increasing in the early part of after hours.

The broad trend remains up, but we sure are getting toppy, and arguably are due at least some sort of multi-day decline. 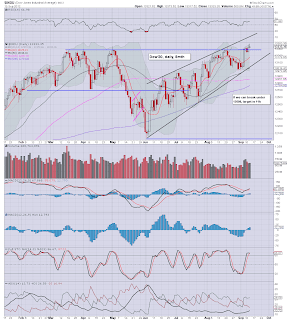 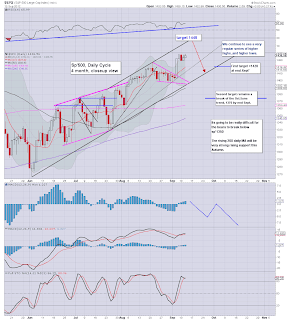 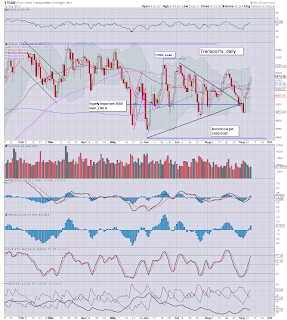 As I've noted for a few days now, the transports continues to show significant strength, and it is still suggestive of higher highs for tomorrow. However, we will be coming up against stiff resistance of 5200/5250, and I am very doubtful the tranny can put in a close over that.

The Sp' closed reasonably well, and looks set to hit my target of 1445 tomorrow. That might occur right at the open on a gap up, or it might take the FOMC announcement at 12.30pm EST to inspire the markets to briefly spike higher.

Regardless, I will most definitely be looking for a re-short in the 1440s - having exited at 1401 last Tuesday.

It remains important to note that both the weekly and monthly index cycles are all outright bullish, although they are certainly sporting a very bearish wedge formation, that should in theory eventually break/snap sharply to the downside. As noted last night, a break of 1350 would open up a very much lower target of 1200/1170.

So, for anyone who does short, they really need to catch the top of the cycle, and be very mindful that any declines will probably be pretty limited. Certainly, trading on a Fed day is not for those who are faint of heart.