The broader market declined around 1% this week. Whilst it may signal the very first turn back lower, for the moment, the primary trend most certainly remains UP.

The good thing is that there are very clear break/snap levels to keep in mind for the weeks ahead. For those who do still hold to a medium term bearish outlook, the short-stop levels are very obvious.

Lets take a look at the six main indexes on the weekly cycle... 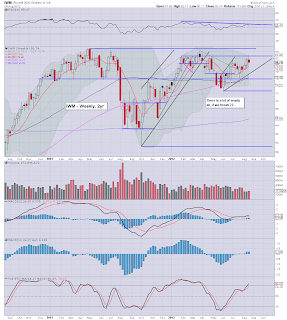 Interestingly, the Rus'2000 made a perfect hit of key resistance, and quickly fell back. On the MACD cycle, we do have the first sign of levelling out, but underlying trend is still positive. Only with a break under 78 can the bears start to get emboldened about the Autumn to come. 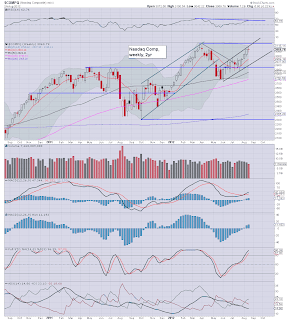 Tech' remains super strong -not least because of AAPL, and only closed the week fractionally lower. We're getting real close to the March highs. One thing to note for the tech', there is a huge buffer zone of 170pts, without breaking the primary up trend/channel. There is no significant sign of a turn lower 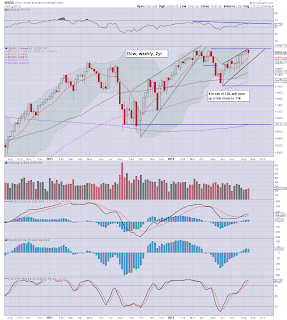 A fail at key resistance in the Dow. We also have a tick lower on the MACD cycle, although we remain positive cycle overall. Only with a break below dow'12800 can the bears begin to get confident, and even then, bears really need a break under 12400. 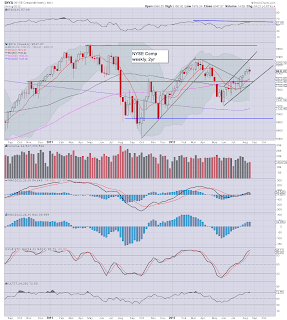 The master index is showing the first sign of levelling on the MACD cycle, but primary trend remains UP overall. Only with a break under 7800, almost 250pts lower (4% or so), can the bears start to get confident.
There is some divergence on the RSI, but generally, the master index remains pretty bullish. 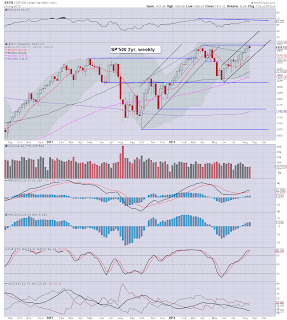 The SP'500 made a fractional new high of 1426, but closed the week a touch under key resistance. Overall, the trend remains strongly upward, but there is some very noticeable divergence on the RSI and Full Stochastic.

If the SP' can again close lower next week, somewhere under 1380, the doomer bears will have something very important to get curious about.

A break into the 1340s, potentially opens the door to a huge autumnal drop, primary target would be around 1200/1150 - which would match up with trends/support on the big monthly cycle. 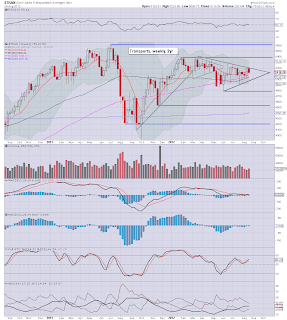 The tranny remains the weakest of all indexes, and could still yet be the underlying warning that 'all is not well'. The break levels are very clear....

Bulls need a close over 5400, bears need a weekly close <5000. Overall, there has been no clear trend since the start of the year, the transports are a real mess. The direction in which the transports eventually break, will be likely the key signal this year, and into 2013.

A few clear things can be noted...

First, the primary trend IS still upward. So, any 'doomer chatter' out there is really fighting against what remains a very consistent up trend.
Second, this past week we've seen a number of indexes fail almost precisely at key resistance. Only the Sp' broke a new high, and that only lasted a matter of a few hours before falling lower.
Third, there is a buffer zone to the downside of between 2-4% for most indexes, which the bulls can sustain, without breaking the primary uptrend.

The week will be consumed with chatter about the Bernanke who will make a key speech at the annual Jackson Hole event. Its also important to note that Draghi of the ECB will also be at the hole next Saturday, so there is a serious secondary threat of  'post-hole Monday gap-up/ramp', to the bears.

As noted many times this week, the daily cycle highlights two key levels. The uptrend/support of 1380, and the previous cycle low of 1354. Only with a break <1354 can the bears start to go on the rampage, until that is hit, there is a very serious threat of continued post Jackson hole ramp to sp'1450/75, or disturbingly even higher.

So, lets see if we can close next week lower, by around 2-3%, despite the Bernanke.

I have to add that I frankly have no idea which way this nonsense is going this Autumn. I think its fair to say we could be trading the end of November anywhere in the range of sp'1100-1550. It remains a truly incredible time to be part of the market. Anyone who claims 'they know for sure, what is coming' is no less insane than the printing maniacs of the central banks.

Good wishes from London
Posted by Trading Sunset at 20:17:00
Email ThisBlogThis!Share to TwitterShare to FacebookShare to Pinterest

Another week done, and we're getting close to the more volatile Sept-November trading period.

Bears arguably have a narrow window from mid-September to late October to get 'something started', otherwise, bulls will remain in control until spring 2013. 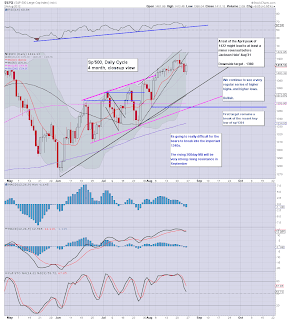 With the hourly cycle crawling higher, we saw what was largely a technical bounce, which was inspired by some Fed letter (blame Marketwatch I believe). Volume remains horrifically low, and it seems even the algo-bots are less active than they used to be. Knight Capital related?

Sp'1380 looks the best the bears can get next week. All the doom chatter out there remains very premature, never mind the fact we've still got Jackson hole, the labor day holiday, and then the pre-FOMC build up into mid-September.

Baring some kind of strong news story out of Europe, '1380 will likely hold up.

As I've been noting all week, if there is one thing that IS clear - and others are also noting it, until we see a break into the 1340s, the primary trend remains UP.

That's all for today, have a good weekend.

Goodnight from London
--
*look for a major posting later on Saturday.
Posted by Trading Sunset at 02:00:00
Email ThisBlogThis!Share to TwitterShare to FacebookShare to Pinterest
Newer Posts Older Posts Home
Subscribe to: Posts (Atom)