The VIX closed well above its morning lows - as the main indexes fails to hold most of their opening gains, but still closed around 1% to settle @ 18.12 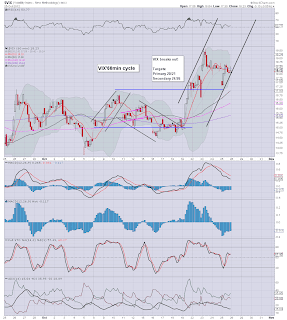 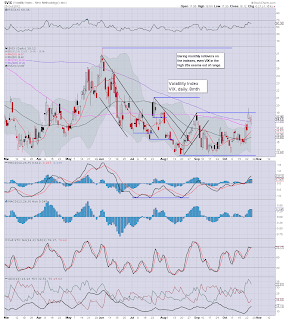 A somewhat quiet day in VIX land. The closing decline was marginal, and generally speaking, we remain in a near term up trend.

It will be VERY important for the VIX to hold >18 tomorrow, and the bears should preferably seek an opening spike into the mid 19s.

Best guess remains that there is at least one further major wave lower in the indexes, with the VIX breaking the big 20 level.

A relatively quiet afternoon after the morning gains that once again failed to hold. A very slight rally into the close, probably a combo' of short covering and deluded maniacs buying AAPL/AMZN. 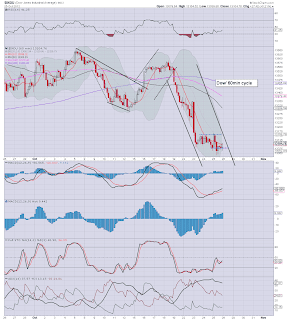 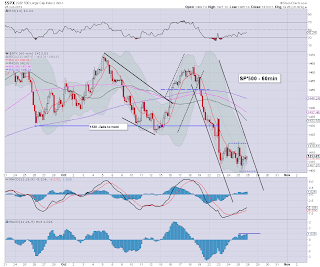 A somewhat dull closing hour..with Mr Market now waiting for earnings from AAPL and AMZN. Both will have some significant influence on tomorrow's trading session.

The VIX did manage a marginally higher close, and the hourly VIX cycle offers 'major upside' for Friday to at least 20/21, which would probably equate to sp'1390s.

back later.
Posted by Trading Sunset at 21:02:00
Email ThisBlogThis!Share to TwitterShare to FacebookShare to Pinterest

With one hour to go, the market is only marginally higher. If the bulls somehow pull a last hour ramp, it would really taint the current 5 day decline. The bears need to hold the line here, and close the main indexes at least flat, preferably a touch red. 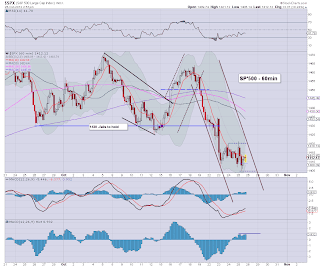 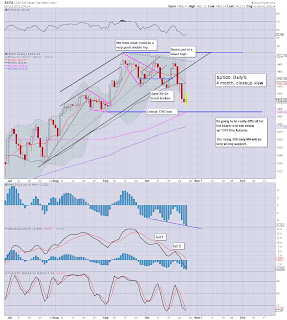 For those seeking much lower levels - as still suggested by the weekly charts, we could really do with seeing some weakness into the close.

*watch AAPL and AMZN at the close...earnings are due.

More after the close
Posted by Trading Sunset at 19:53:00
Email ThisBlogThis!Share to TwitterShare to FacebookShare to Pinterest

The earlier moderate declines are back to moderate gains as the bulls once again push. A close over 1420 would be a major defeat for the bears, so...its real important that we see another minor wave lower into the close. 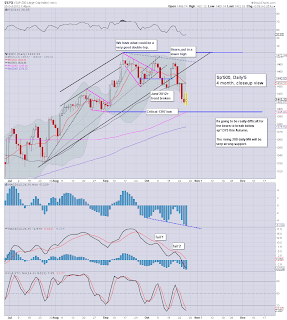 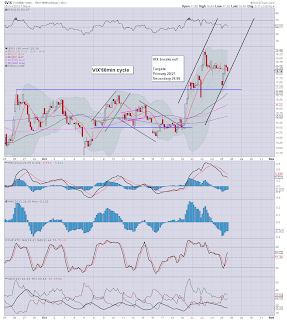 Interesting day so far, especially with the second failed opening rally in a row. Bulls are really struggling, despite the small rally in the past hour.

Key aspects for the bears to seek...

*big earnings at the close.

back at 3pm (probably)
Posted by Trading Sunset at 18:52:00
Email ThisBlogThis!Share to TwitterShare to FacebookShare to Pinterest

The opening gains have entirely failed to hold, and the bears are really starting to show their strength. The VIX has similarly fully reversed, and there is major potential for volatility upside into Friday. 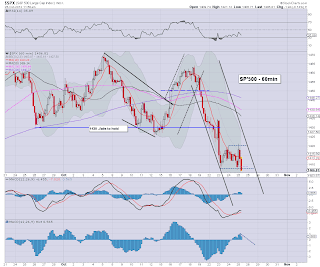 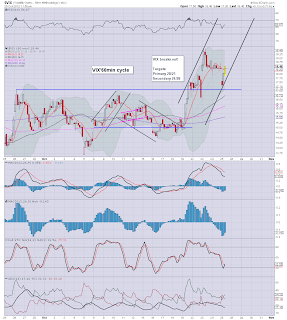 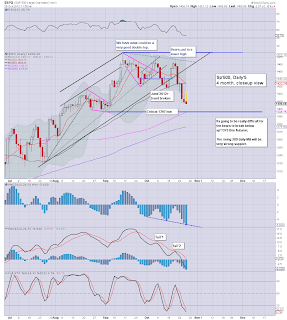 Those shorting at the open will be having a great day so far. Those holding from yesterday (including yours truly), are now recovered from those earlier index gains.

With important earnings at the close, the time between now and the Friday close is so very important.


Time for lunch...back around 2pm
Posted by Trading Sunset at 16:51:00
Email ThisBlogThis!Share to TwitterShare to FacebookShare to Pinterest

10am update - another failed rally?

Good morning. The bulls are making another attempt to break this decline. First soft resistance is the declining daily 10MA of 1434. I can't see that being broken above today. 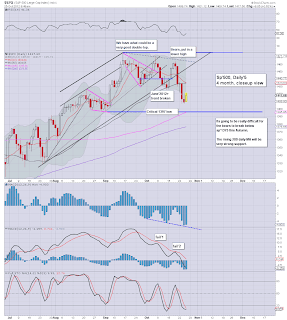 Another very important day, one where the bears again have to keep a tight restraint on the opening gains, and break it back negative later in the day. If we see another failed rally, then it bodes badly for the bulls tomorrow, and into next week.

Bears should seek a significant red close, under 1400.

We have AAPL and AMZN earnings at the close, its going to be a long day indeed.

back at 12pm
Posted by Trading Sunset at 14:50:00
Email ThisBlogThis!Share to TwitterShare to FacebookShare to Pinterest

With the main indexes closing lower again - after a failed opening rally, the bears are starting to get a little confident. Perhaps too much, but even so...the move from 1474 to 1408 is only 66pts, that is a mere 4.5% or so. Its a very negligible move, and the notion that 'we're oversold' is simply nonsense. 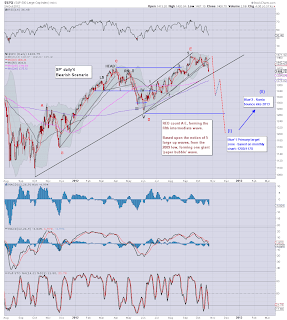 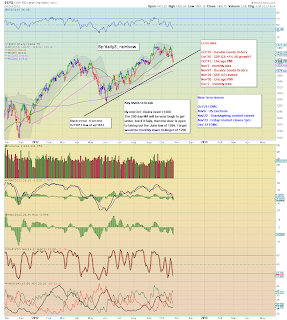 The scenario outlined on chart'4 is just something to consider. I am NOT currently trading that outlook, I generally trade around the hourly index cycles.

However, when you consider the weekly charts (including the VIX), there is a 'small' chance we could drop to the low 1300s within the very near term. That would then likely make for at least a 50/75pt bounce before any further waves lower.


Where do we bounce?

We are VERY likely to bounce in the coming days, the only issue is at what level. A very natural level would be sp'1395/1400 - where is there is key secondary rising support (from the Oct'2011 low), fib levels, and this zone is also home to the recent cycle low of 1397.

Lets be clear, it is very possible we'll floor early Thursday in the 1390s. However, I am still sensing we have some way to go. I'm also guessing AAPL earnings will disappoint - with a fast decline to the 200 day MA of $580 - it would certainly put pressure on the Nasdaq and the broader market this Friday.


A final note on the weekly rainbow chart... 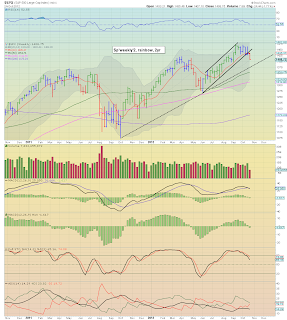 Its looking very bearish isn't it? We now have the MACD (green bar histogram) moving to negative cycle, and there is a good downward trend underway.

The only issue is where it stops. I'm guessing a hit of the lower bollinger - around sp'1325/00. This target could take some weeks to hit (if at all), but for many bears, the low 1300s would make for a very nice Autumnal decline.

The market opened higher, but it sure didn't close that way. Despite battling all day, the bulls failed to hold the moderate gains and the market closed a little lower - although the transports suffered massively after NSC earnings. 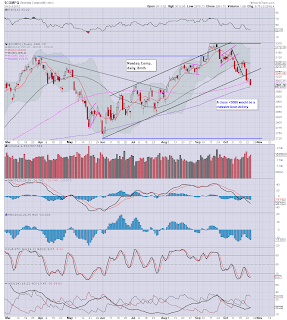 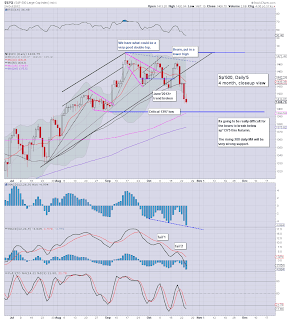 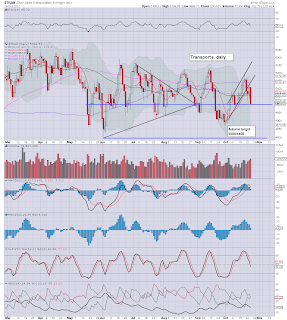 The tech sector is struggling to hold the 200 day MA, and a break/close below looks very viable for Thursday. This suggests to me that the sp' will also have a chance at breaking lower to sp'1375.

The daily MACD (blue bar histogram) cycle on most of the indexes is getting pretty low (except for the transports which is warning of a snap lower tomorrow/Friday). So, there is a real threat of a multi-day bounce, not least if we can fall a few more percent before the weekend.

I remain short, and seeking an exit 1395/1400 tomorrow morning. However, there is a very significant risk of a major gap lower - much like Tuesday, that could see the market drop as low as sp'1375, before a latter day bounce.

I continue to look towards Q3 GDP (to be released Friday morning) as a critical data point. If Mr Market decides it needs to price in a 'likely' US recession (even without the fiscal cliff issue), then a brief snap move to sp'1325/00 seems viable...within the very near term....as in 'days'.