VIX - fear reducing, at least for a while

With the main indexes showing gains of 2-3% today, the VIX lost over 10%, and now looks set to fall for some days to come. 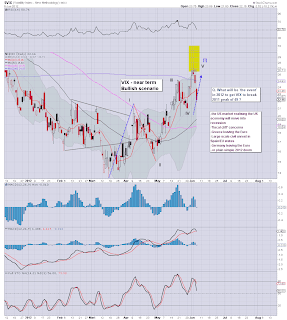 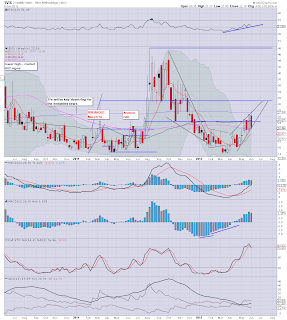 From a count perspective, this large move up would be wave'1..and now we're due a brief pullback..before the VIX explodes higher - in the same style as we've a number of times over the last few years.

In the bigger picture, I am looking for VIX 30s/40s by the end of June/early July. There are just so many issues out there right now, and things are very much building to a very volatile conclusion in Europe this summer.

More later..looking at those daily index cycles.
Posted by Trading Sunset at 22:30:00
Email ThisBlogThis!Share to TwitterShare to FacebookShare to Pinterest

After five lousy weeks for the bulls, today they fought back. The opening was actually not that great, with futures moving from dow +100 to +50 or so...but then a relentless climb higher began. The closing hour was also strongly bullish, and the VIX confirms the index move. 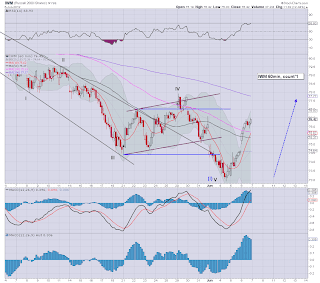 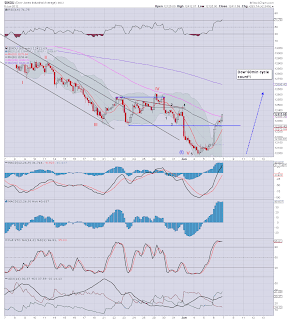 Baring some bizarre comments from the Bernanke tomorrow morning such as 'the financial system will collapse next week', this market looks set to broadly continue the rally into next week. The target for this fast and strong wave'2 is sp'1350/60 - and considering the coming events later this June, I'm looking for this wave to end by next Friday June'15.

More later...dealing with the VIX, and those daily index cycles.
Posted by Trading Sunset at 21:01:00
Email ThisBlogThis!Share to TwitterShare to FacebookShare to Pinterest

The intra-day action in the last hour or so is very much the style of a first wave higher. Doubtless many bears have been shorting today at various levels..and they've all got burnt. The smart ones will have been quickly stopped out, whilst the amateurs will be holding all the way into the 1350s or so - not so good. 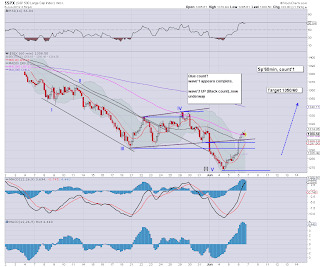 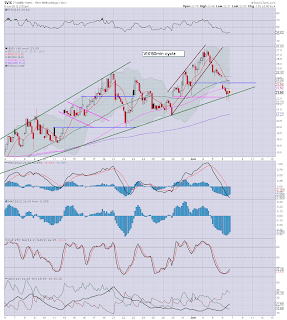 However this closing hour ends, i'm now assuming wave'1 is done with. The daily cycle on all indexes is confirming this view, and there are a few other little signs also (bullish engulfing candles) all over the place too.

VIX confirms the index move higher, bulls likely to control the next 5-7 trading days. Yes, the VIX is on support, but the daily cycle is suggesting further falls.

*baring the Bernanke coming out  tomorrow proclaiming 'the end of the world is nigh', this market will probably deal with whatever he says with some renewed hope of QE.

More after the close
Posted by Trading Sunset at 19:57:00
Email ThisBlogThis!Share to TwitterShare to FacebookShare to Pinterest 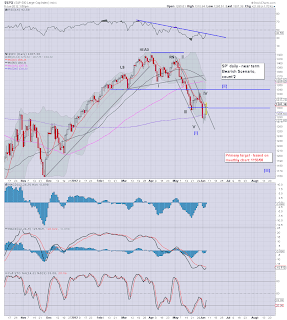 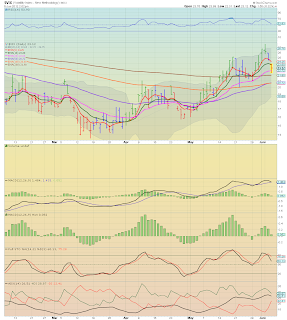 Stay tuned
Posted by Trading Sunset at 19:01:00
Email ThisBlogThis!Share to TwitterShare to FacebookShare to Pinterest

1pm update - everything is fixed in Europe..yay!

Mr Market is acting today as though everything is all fine again. In reality, this move is certainly partly technical, and partly due to a reverse cascade UP. A lot of bears will have got the kick today, including many at the 1300/05 level around 10am.

The size of increase today is very much suggestive that wave'1 down is complete, in which case we are on our way to the wave'2 target of 1350..or a little higher. 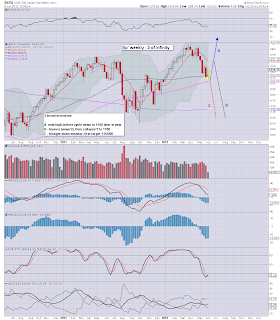 Just one simple chart this hour, the weekly cycle.

-Monthly index trend is down, especially all those world indexes (see weekend post)
-FOMC, will fail to inspire the market, and market will realise QE3 NOT coming until later in the year.
-Greek Elections - new coalition could easily announce (Sunday night event?) a plan to exit the Euro and/or default on all intl. debt obligations. The attention will then switch to Spain..which is of course the giant economic ticking bomb in the EU. Spain remains too big to fail..and arguably too big to bail out.
---

*I am most definitely sitting this out, the next event to come remains Bernanke, Thursday'10am.

More later!
Posted by Trading Sunset at 17:56:00
Email ThisBlogThis!Share to TwitterShare to FacebookShare to Pinterest

Market holding on tight to the gains. Its very difficult to know whether this is a fiercely nasty top of minute wave'4, or if this is wave'A of a corrective wave'2 UP (see daily chart). Regardless, I'm inclined to not guess..and am sitting this out. 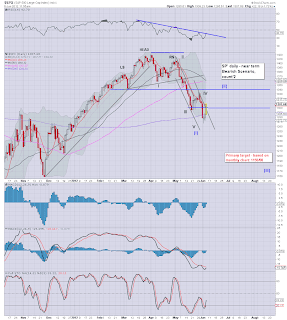 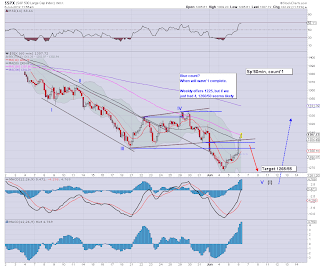 2. Wave'1 is not complete, the Bernanke will upset the market tomorrow, and we'll still put in one final low around 1260/55 by the Friday close.

If its the latter, I'll go long before the Friday close. If its the former, I'll probably just sit back, and wait for this nonsense to top out.

What remains most important of all, the BIGGER PICTURE target remains sp'1100.

The Bernanke can NOT do QE3 if the markets are back in the mid 1300s.That is the one thing I am certain of.

Time for lunch!
Posted by Trading Sunset at 16:57:00
Email ThisBlogThis!Share to TwitterShare to FacebookShare to Pinterest

11am update - another nonsense rally

This mornings hit of sp'1292/95 was not that unexpected, but 1305 is certainly starting to appear as a breakout. Yet the 15/60min cycles are on any basis VERY over-stretched. Clearly, anyone going short in the opening 30mins 'should' in theory have already got the boot.

*interestingly, the dow'30 is not yet breaking about what may have been the minute wave'3 low, although we're only talking about a few more points. 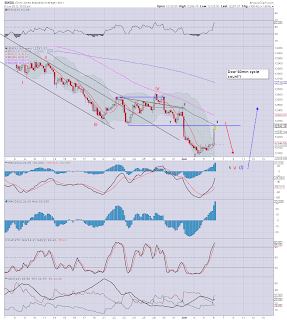 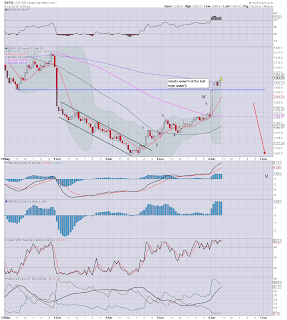 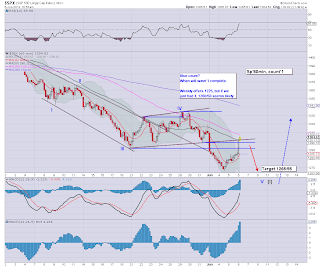 I'm sitting this nonsense out, its too annoying, and I'll be more confident after the Bernanke is out of the way tomorrow morning.

Let me be clear, there is STILL potential for a move lower, even below the recent 1267 low - even though that seems unlikely. Yet, the risk to anyone shorting is high, and already today we've seen another key level taken out, which is starting to become a reverse cascade UP.

*considering the size of the rally, the VIX is only moderately lower, 5% or so. If the VIX can somehow close green...that'd be one key sign that one final low is still due.

Regardless of all that, today is a good example of why stops are useful!

More later...
Posted by Trading Sunset at 15:58:00
Email ThisBlogThis!Share to TwitterShare to FacebookShare to Pinterest

For the day-traders, this is surely the time and place to be hitting the short-button, with a stop a touch over the equivilant of sp'1300/1305. Yet, as I type, we're now at 1302, is this merely a stop wash-out? 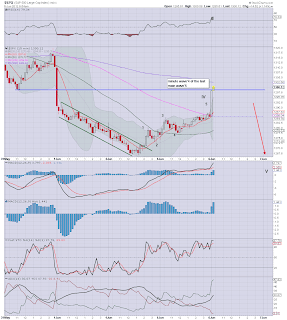 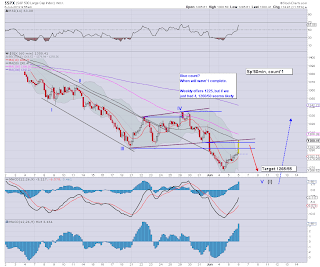 The daily cycle suggest we've completed wave'1 lower, yet both micro-cycles are now very over-stretched to the upside, we're due at least a minor move lower.

With the ECB annoucement and press conference all wrapped up, that leaves just the Bernanke tomorrow morning.

More later
Posted by Trading Sunset at 14:57:00
Email ThisBlogThis!Share to TwitterShare to FacebookShare to Pinterest

Good morning. Futures are holding onto pretty strong gains of around sp+10. So, the sp' is set to open around 1295 which is at the top end of my target zone for this minute'4 of 5.

The 'count' for wave'1 remains incomplete. We are still due one final fifth wave lower, but this is now looking very unlikely. I am not sure what to make of this, I suppose it could merely be a 'bonus bounce' for those bears brave enough to short in the opening hour. 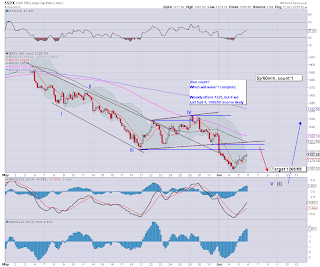 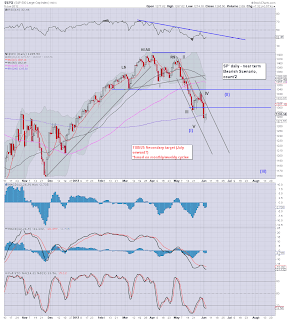 From a cycle perspective we are going to open up very high, its certainly not a great place to still hold onto - or take new, long positions. Those bears who were shorting into the close will be somewhat aghast to see this mornings pre-market!

Those looking for one final wave lower will need to see today close red, that's feasible of course, but that sure won't be easy to achieve. There is no econ-data due today, only the Fed Beige book at 2pm.

*Remember, we have the weekly jobs data..and then the Bernanke speaking tomorrow at 10am. There is still potential for one last wash out.

More across the day.
Posted by Trading Sunset at 13:27:00
Email ThisBlogThis!Share to TwitterShare to FacebookShare to Pinterest

To close today, a brief reminder on where we are ... Regardless, the outlook remains very bearish on a multi-month basis

Thats all for today...