The Futures Wheel is spinning up as I type, Sp -1pt so far, kinda negligible, certainly no collapse wave so far tonight.

I was reading one of the regular chartists (see my Chartists list), and thought I'd throw the following two charts out there. First, go see the original idea:. http://cyclicalmarketanalysis.blogspot.com/


So, as inspired by Cyclical Market Analysis... 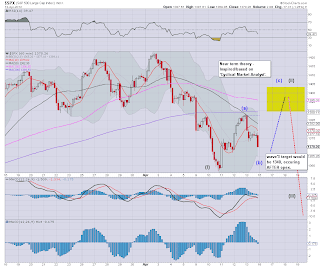 This assumes that the Friday afternoon 'surprise' was just a B (or whatever you want to call it) wave lower, and that there is one final C up-wave due early this week. If we somehow do get to 1395/1405 this week, it'll sure be one place for the current trapped bulls to exit.

This outlook would then assume we break below the recent low, with a prime target of around 1340, more likely in the week after this Friday opex. 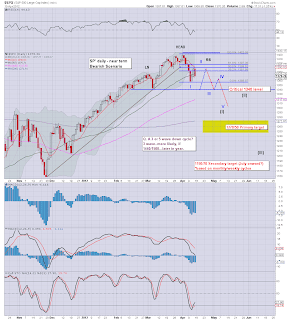 From the daily perspective, assuming we do indeed get a little C' wave up, and then proceed to 1340, what then? Well, maybe we'll cycle back up to form a right shoulder..forming a pretty obvious H/S formation. Will it be that simple in the weeks ahead? A break of 1340 in my view would likely take us down to 1270/50 pretty quickly. Whether we can stop there, or keep falling straight to the lower boundary of what is a giant wedge on the weekly/monthly cycles (see weekend postings), we'll just have to patiently wait and see.

Considering all the many weekly and monthly cycle charts which I have highlighted this weekend, the outlook is starting to look significantly bearish. However, as noted many times, the bears MUST see April close at current levels or better. It will be no good if we drop to 1340 and yet somehow still close over 1380/90 by month-end.

Goodnight..and good wishes for the trading week ahead.
Posted by Trading Sunset at 23:19:00
Email ThisBlogThis!Share to TwitterShare to FacebookShare to Pinterest

With the weekly cycles clearly turning bearish, lets look at the most important cycle of all, the monthly! 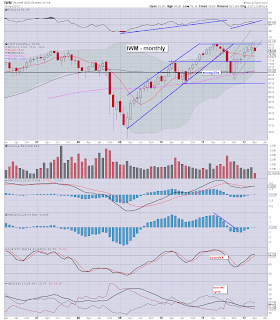 We have clearly broken the October trend, first bearish target would be the 10MA just a touch under 76. 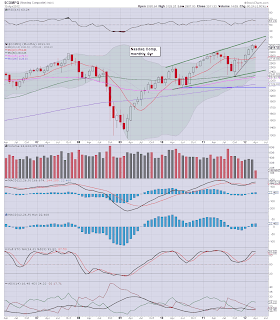 Tech' is still holding broadly over the October up trend/channel, it will certainly be vital to the bears to see April close at this level..or lower. We're only 2.6% off the recent high, and we could obviously recover that amount over just a few days. 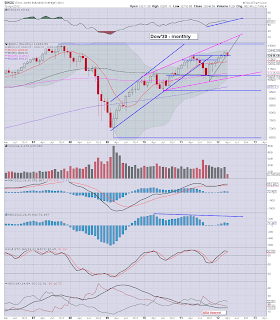 Dow looks weak, but just like other indexes we are barely 3% from the highs. The recent weeks choppy action could merely be a shake-out week, although the weekly cycles would argue against that view.

Importantly, the MACD (blue bar histogram) cycle is now starting to rollover. So long as we close at this level - or lower, end April, we'll get a confirmed preliminary sell signal. 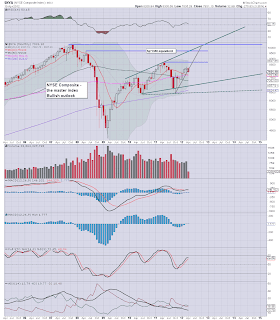 The NYSE comp' is always a better index to follow than the Dow or Sp', due its much greater number of included elements. An important aspect to recognise is that the Comp' never did break above its May'2011 high, in fact, it really didn't get that close at all. The MACD cycle is looking very weak at the 0 line, and other indicators offer a teasing sign of bearish rollover signals by month-end. 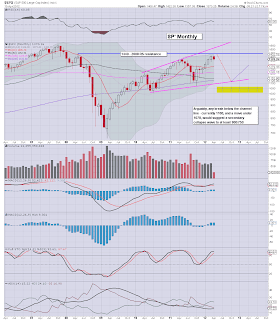 Very much like the Dow, we have the first sign of a bearish rollover, but since we're only half way through the month, we could still close very differently. As I've noted many times before, the entire formation could be a giant 3 year H/S formation..and we could be at the top of the RS. By definition, if its a H/S..we should be breaking under the October low sometime later this year or early 2013. 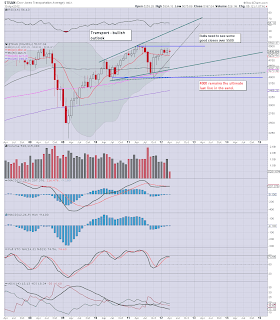 This extremely bearish sector has been stuck for over 3 months now, just over the big 5000 level. The transports sure won't stay in this range forever...sometime soon, its going to break, the only issue is which way?

Whether you are bullish or bearish, the direction in which the transports breaks will be a key indicator of the subsequent 3, 6, even 9 months across the main market.

We're only half way through April, so all these bearish candles could close flat..or even positive. How we close April we be far more important than where we are right now.

I would argue that if we do manage to close April at these levels or lower, then we'll get the first big sell signal we've seen since last summer. Of course, just as important, the bears will want to see follow through confirmation in May. If we do get that confirmation, there will be a real chance of Sp'1150 later this year. The H/S formation - if that's what it is, would suggest significantly lower than 1150, but...first things first, lets see how April concludes.