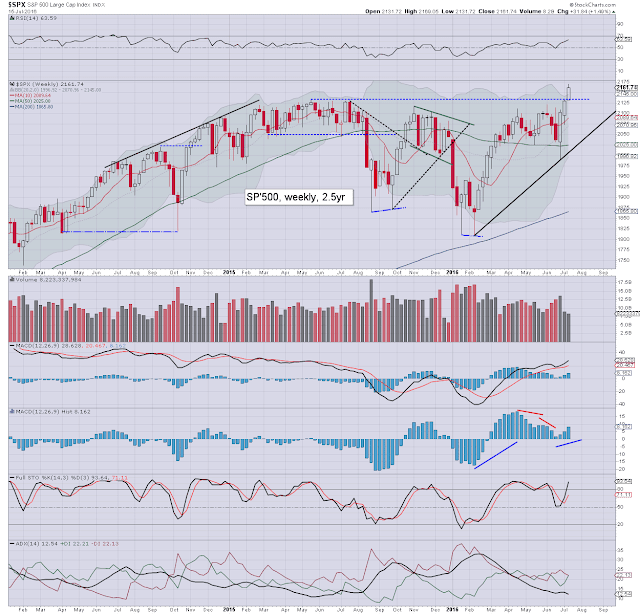 The sp'500 has swung from 1991 to 2169 - gain of 178pts (8.9%). On any basis, this is a very powerful upward swing, and considering the breakout to a new historic high, it bodes for broader upside across the summer and into September. Underlying MACD (blue bar histogram) ticked higher for a third week.

Unless equity bears can break back under rising trend - which by end August will be around 2070, there is zero reason to be bearish.
-- 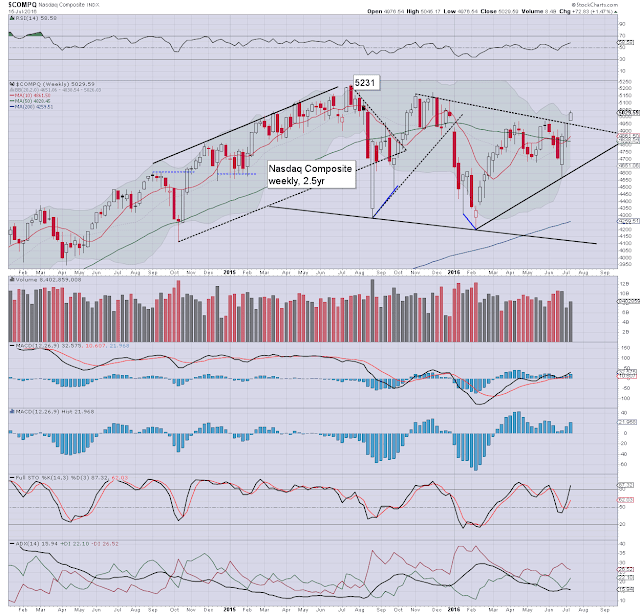 The Nasdaq gained 72pts (1.5%), settling the week above the giant psy' level of 5K. There is a clear break above descending resistance, with prices already brushing the upper weekly bollinger. Next key levels are 5150, and then the historic high of 5231. Considering the sp'500/Dow, the Nasdaq looks set for the 5300s by late September. Talk of 6K by end year can now begin. 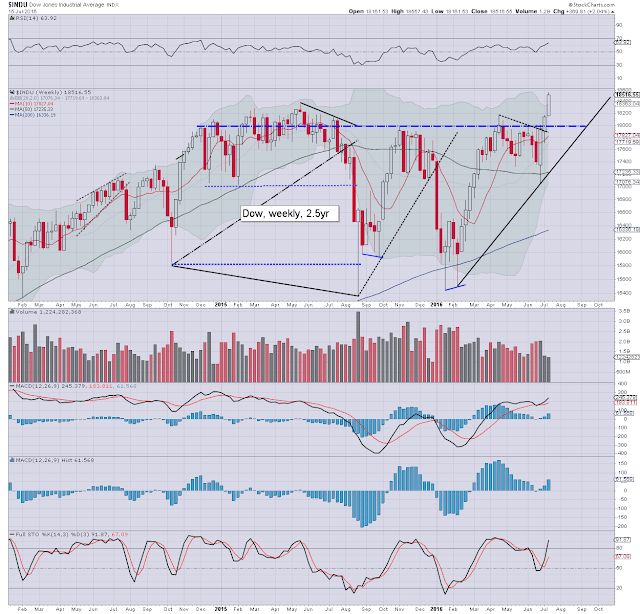 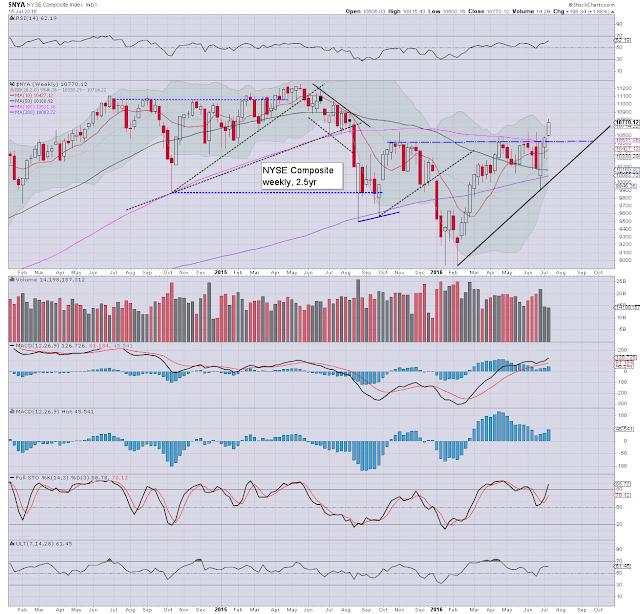 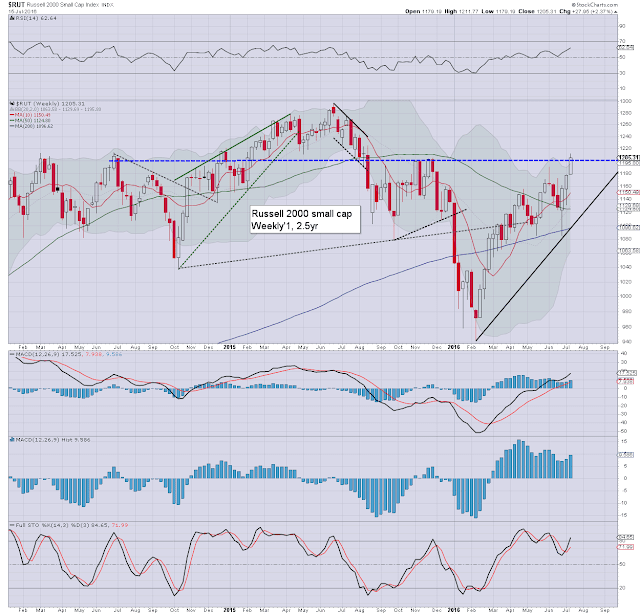 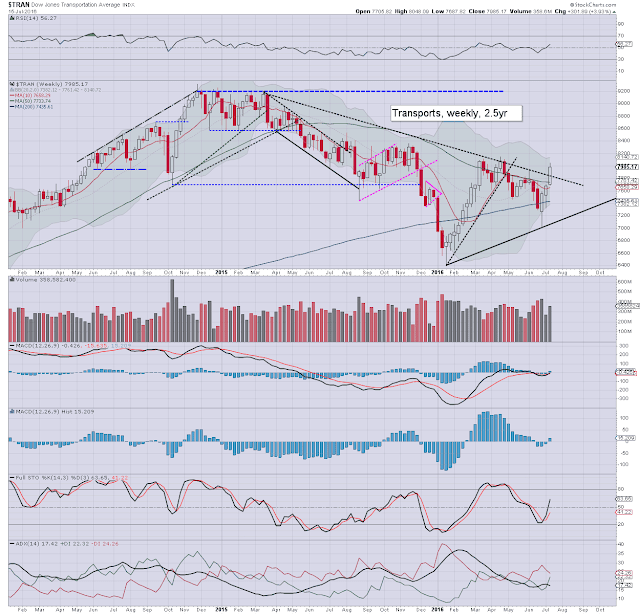 A third week of significant upside, lead by the sp'500, and followed by the Dow.

Some near term cooling ahead of the next FOMC is probable, but with July set for significant net gains.
--

Regular readers will be well aware I have a somewhat cynical view of Elliott wave theory, not least as its arguably inflexible and dismissive of sporadic news events.

However, I am aware of most of the main counts/ideas. The following is the most basic, but also most valid count from the March 2009 low 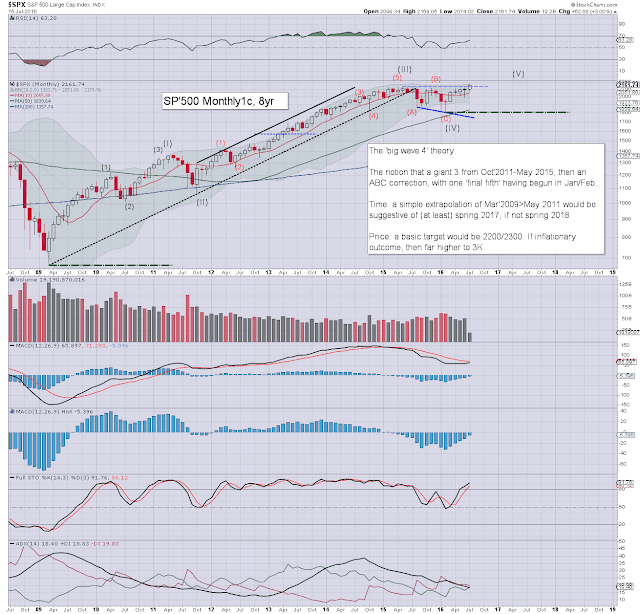 Effectively, wave'4 was an ABC sideways correction spanning 9-10 months, with a fifth wave having begun in Jan/Feb.

How high and for how long?

There are a fair few scenarios, and I'll detail this issue in more depth another time. Suffice to say, I'm resigned to mid term upside to the sp'2300/500s into next spring.

There are a truckload of corp' earnings, but in terms of econ-data.. there isn't much.

The ECB will meet/announce on Thursday, and the market will be looking for some provisional idea about a new bank support program, particularly for the Italians.

*no fed officials, as its the blackout period until the next FOMC announcement of July 27th.
--


If you have valued my posts across the past four years, you can support me via a monthly subscription, which will give you access to my continuing intraday posts at my new home of Permabeardoomster.com

*the next post on this page will appear Monday at 7pm EST.
Posted by Trading Sunset at 17:00:00
Email ThisBlogThis!Share to TwitterShare to FacebookShare to Pinterest

A week of historic equity highs 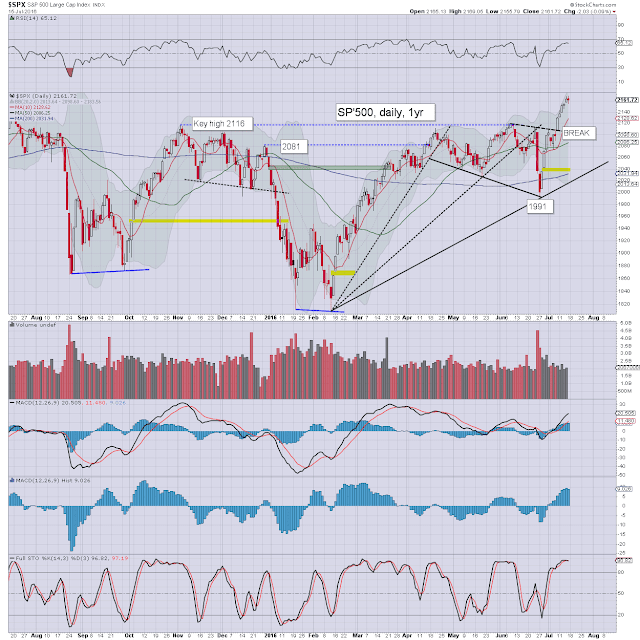 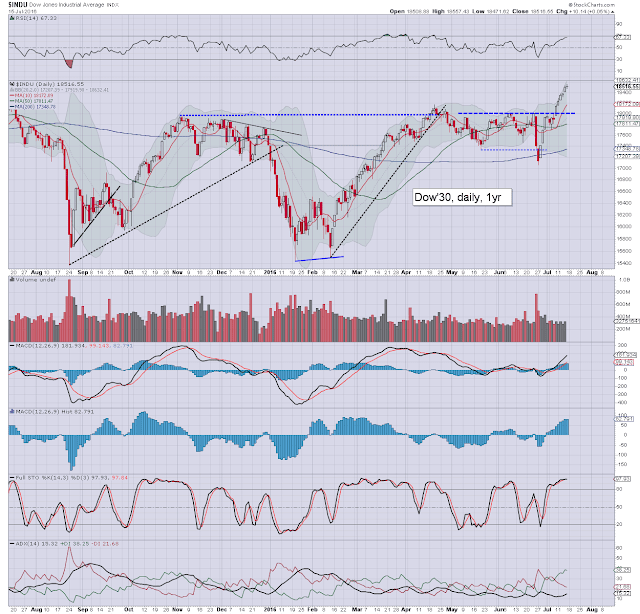 It was just another day for the equity bulls, with a pair of new historic highs in the early morning, and then some rather natural weak chop into the opex-weekend.

The next 8 trading days - into the FOMC of July 27th, threaten some slight cooling. Certainly, the 2130s look probable, but a test of the 2100 threshold won't be easy.

Thanks for the messages/emails, it makes the week far more interesting!

--
*The weekend post will appear Sat' 12pm EST, and will detail the US weekly indexes
Posted by Trading Sunset at 00:00:00
Email ThisBlogThis!Share to TwitterShare to FacebookShare to Pinterest
Newer Posts Older Posts Home
Subscribe to: Posts (Atom)