The US indexes climbed for a third consecutive week, with gains of 2.2-3.5%. Near term trend is bullish, with upside into August, perhaps as high as sp'1740/60. A 'moderate' down cycle to the 1550s then appears viable, but the mid/long term trends remain powerfully on the bullish side. 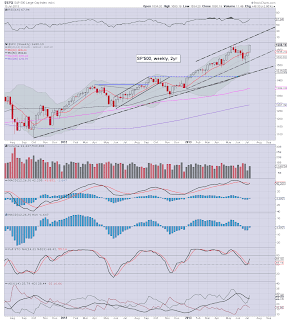 The sp' battled an impressive 3% higher this week. The weekly close of 1680 really annoyed those bears still holding on the short side. Call it whatever you want, but the mid-term trend remains strongly to the upside.

Indeed, underlying MACD (blue bar histogram) cycle is set to go positive cycle at the Monday open, and there looks to be an easy 2-4 weeks left in the current up cycle.

For those bears seeking downside in late Aug/September, the lower weekly bollinger is now at 1514..and still inexorably rising. By Sept' it will be in the 1550s. 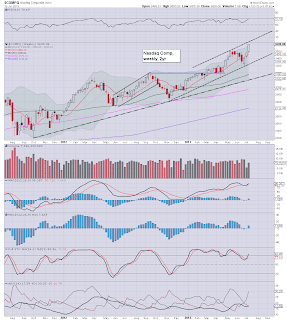 The tech sector jumped a very strong 3.5%, and that makes for the third strong up week. With the composite now in the 3600s, the only issue seems to be when...rather than if the 4000s will be hit. Indeed, lets consider the unthinkable...5000s. Not this year, but perhaps in 2015. 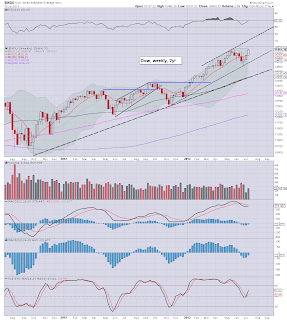 The Dow was somewhat lagging other indexes this week, with a gain of just 2.2%, but still, that made for the third weekly climb. Despite my mid-term bullish outlook, I have to think Dow 16k will be difficult to hit, before the next multi-week down cycle, which could begin within 3-4 weeks. 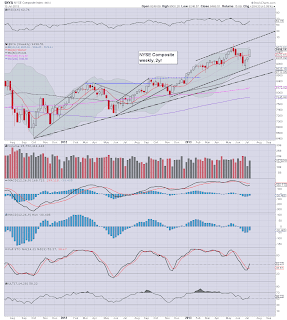 The master index climbed 3.1%, but is still a little below its May high. The 10k level does not look viable in the current up cycle, but certainly...before Santa arrives in December. 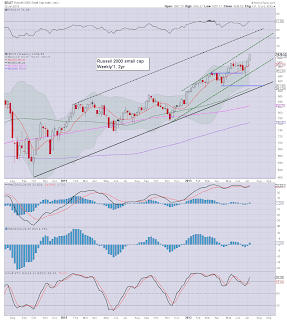 The second market leading index, ramped another 3.1%, and is now comfortably holding above the ultimate psy' level of 1000. R2K in the 1100s will be 'difficult' to hit in the current up wave, but 1200/1300s look easily viable later in the year. 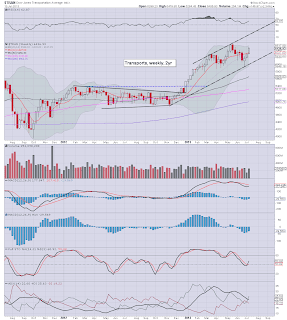 The old leader managed a 2.3% gain, and is still a touch under the May high. Underlying MACD cycle is set to go positive, but not for another 2-3 weeks. 7000s do not look viable in the current up wave.

Seriously though, bulls are in absolute control, and despite the stupid 'taper talk', the QE does continue, and the market is holding together very well.

Given another 2-4 weeks of upside, the weekly charts will probably be offering some very clear bearish divergences, and that should offer downside of a 'moderate' degree in late Aug/September. Certainly, the next wave lower should be somewhat stronger than the recent decline from 1687/1560.

Perhaps the most disturbing chart I've ever put together is the following 'hyper-bullish' outlook. I first threw this out there many months ago, and to my own surprise (and disgust) its looking on schedule. 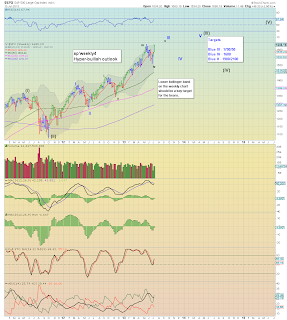 Effectively, a giant hyper-bubble into late 2015/early 2016...somewhere in the sp'2500..perhaps 3000s. Yes, that is absolute crazy talk coming from a self-proclaimed 'permabear', but that IS how I currently see things.

Near term outlook, rallying into Aug/Sept - completing super-hyper 3 of 3 of 3. From here, a moderately strong down wave.  Again, I will be looking for a hit of the lower weekly bollinger - as is often the case in multi-week down cycles - which in September will be the 1550s or so.

Baring a total end to the QE-pomo program, this market looks set to rally for another two years.  I realise that won't please most, but that's how I see it.

There are a fair few bits and pieces of econ-data this coming week (although nothing on Friday). Retail sales on Monday, CPI Tuesday, Fed beige book Wed', and Phil fed survey/leading indicators on Thursday.

However, more importantly, the week ahead will likely again be 'all about the Bernanke'. The Fed chairman will be testifying to the US house/senate on both Wed/Thursday.

*there is no significant QE until Friday July'19. 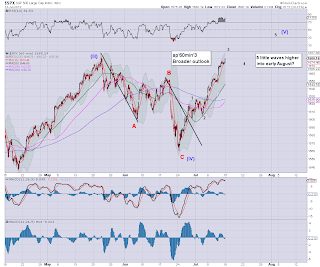 Baring a market upset over China GDP (overnight Sunday), US markets look set to continue higher on Mon/Tuesday. There is no reason why we won't break into the 1700s on the current sub wave. Indeed, if the bulls are going to hit the 1740/60s, I'd want to see at least 1700/10 this week.

Best guess, the market uses the Bernanke as an excuse to sell lower from Wed-Friday, and there is opex of course, which should further be an excuse for 'cooling things down' a bit. At best though, the bears will be lucky to hit the rising hourly 50 SMA - which by opex' Friday will be around 1670/75

*I am on the sidelines, seeking to pick up another set of index/Oil longs, and I intend to hold long into early August.

Back on Monday
Posted by Trading Sunset at 19:08:00
Email ThisBlogThis!Share to TwitterShare to FacebookShare to Pinterest

A toxic market for the bears

For the bears it remains a fiercely nasty, twisted, and toxic market to be trading. Primary trend remains strongly to the upside, and with many indexes at historic highs, we are literally moving deeper and deeper...into the 'twilight zone'. 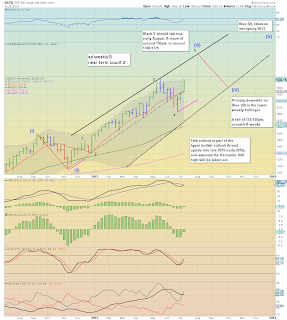 So, another week for the bears to forget. It was looking pretty good late Wednesday afternoon after the FOMC minutes, with an opportunity for a retrace down to the 1630s, but no...the Bernanke put a stop to that.

With the Thursday gap higher, it is again clear that shorting this market is a waste of time and effort, never mind the actual financial costs. Near term trend looks bullish at least for another few weeks.
--

Rather than just dwell on the past though, I will note the following bearish outlook, but I have very low confidence in this right now.


sp'weekly9b - doomer outlook for the autumn 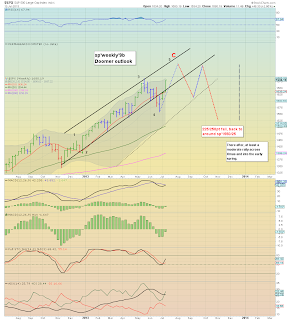 This outlook assumes a peak in August, perhaps as high as sp'1740/60, and then a wave lower - which in theory should be stronger in size/power, than (sub' black 4).

The above outlook assumes at least a mid-term high in August, with some kind of 'multi-month downside', on the scale of summer 2011. Even then, the issue is, if QE continues, how are the bears going to sustain any consistent and strong downside?

Even if we hit the lower weekly bollinger on the next multi-week down cycle - which seems viable no earlier than late August/early September (somewhere in the low 1600s), I would still be very cautious of this scenario.

Monthly trends continue to push higher, and as we've seen time and again since the March'09 lows,  the down cycles are generally weak, and never last very long.

That's all for today, and this trading week. Goodnight from London
--

The market ended the week at historic closing highs, with the sp' settling @ 1680, a mere 7pts shy of the May'22 intra-day peak. The R2K, Trans, Nasdaq all powered higher, only the Dow lagged somewhat - due to Boeing. Near term trend remains unquestionably to the upside. 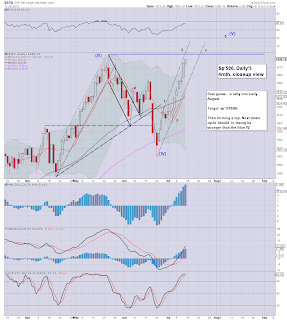 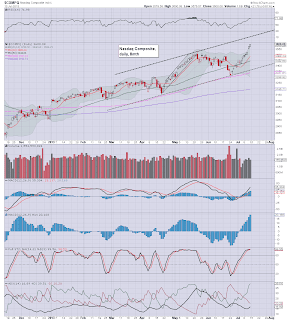 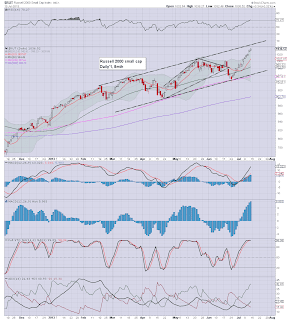 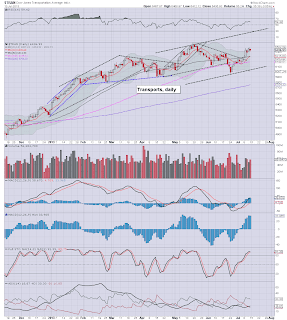 As I was expecting in the closing hour, with the 5/15min micro-cycles fully reset, the bulls managed a little ramp into the close, and it was a pretty nasty close for those bears still holding on the short side.

Bulls are in absolute control, and there is little reason why the sp' won't be trading (at least briefly) in the 1700s early next week. I say briefly, since next week is opex, and the Bernanke is due to speak to the US house/senate, which will probably be an excuse for a very small wave lower, in the latter half of the week.

It remains a nasty, deluded,...and Fed supported market. It makes me wonder if Bernanke's replacement (probably Janet Yellen) will be even more annoying to the bears.