A moderately bearish end to the week. A few indexes closed red for the week as a whole, but more on that over the weekend. The VIX closed a touch under 5% higher..not exactly 'inspiring'. 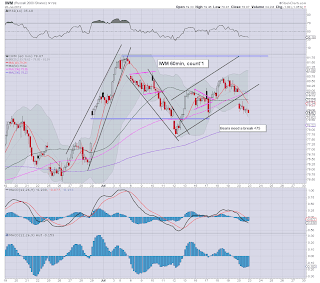 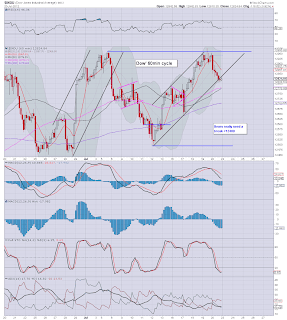 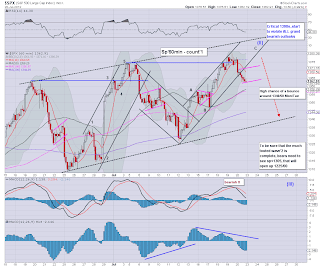 Its been a long and draining week, I can only hope the daily cycle - which has indeed rolled over today, will have some very significant follow through for much of next week. The bears have had a rough time since the June low, which now seems like so very long ago.

Have a good weekend.
Posted by Trading Sunset at 21:02:00
Email ThisBlogThis!Share to TwitterShare to FacebookShare to Pinterest

3pm update - who wants to buy into the weekend?

With the closing hour ahead, who really wants to 'buy the dip' ahead of the weekend? It will be interesting to see the closing action today. 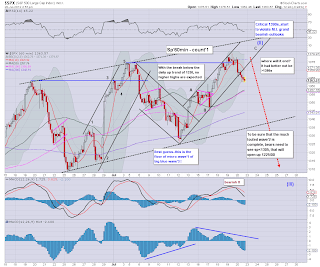 What matters most though, the daily cycle IS rolling over today...next week is the opportunity the bears have been waiting for.

More after the close.
--

Just a possible bear flag (pink) setting up..that might play out Monday..and then a bigger move lower on Tuesday to 1350/40 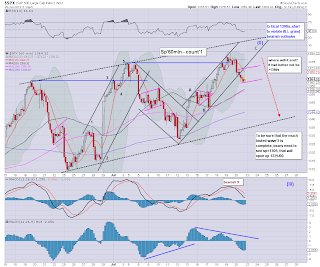 Posted by Trading Sunset at 19:54:00
Email ThisBlogThis!Share to TwitterShare to FacebookShare to Pinterest

2pm update - battling it out

Its starting to become a bit of a battle out there. The usual bull maniacs who are currently buying the dip are facing a problem. The underlying upward momentum that we've had since last Thursday morning - 6 full trading days ago is now ending.

If we do close down around current levels, we are getting a nice provisional sell signal for next week, and the first hint that the big wave'2 from the sp'1266 low in early June is finally over. 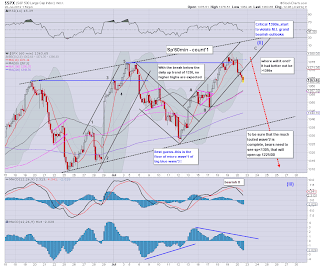 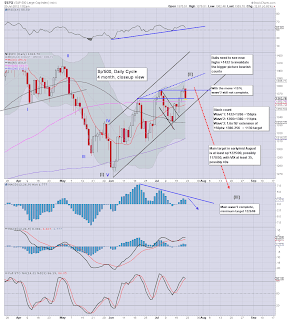 I'm not very content right now with this market, it still feels like there so much risk of a late day ramp. I've seen it happen so many times over the years, especially on what are often choppy opex days. 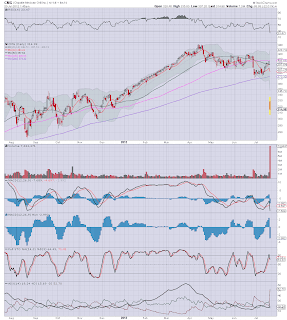 Option puts - those few traders who were buying at the Thursday close...

1pm update - the close is what matters

Until we close today, none of this minor decline is to be trusted. The VIX is up almost 10%, but is barely at 17, that is still crazy low. 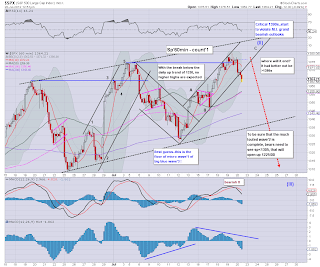 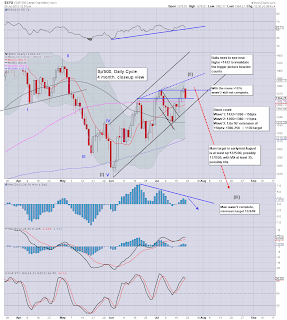 If we keep slipping into the close, I'll probably exit, and look for a better entry Monday.

There remains ZERO fear in the US markets still. All morning both clown networks were relentlessly touting further gains, with an attempt on sp'1422. Further, lots of talk about AAPL earnings (next Tuesday I believe).

Ugly market, and since its opex, we could easily still see a latter day ramp for no good reason.
--

EU indexes were smashed lower today, not least Spain and Italy, the leading PIIGS that will of course eventually default on a Sunday night. The only issue is 'what Sunday?'. Could be mere months, or years - it remains the crucial unknown.

Anyway, the mood is turning, but could still take a few days to gain some proper downside momentum.
Posted by Trading Sunset at 17:54:00
Email ThisBlogThis!Share to TwitterShare to FacebookShare to Pinterest

Bears only able to manage sp' -10pts..thats just no good, but its to be expected.  We could still close green today and delay the turn until the middle of next week. 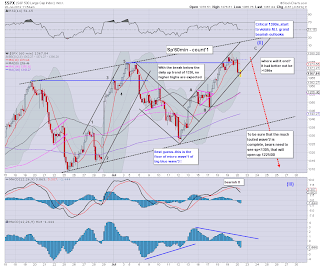 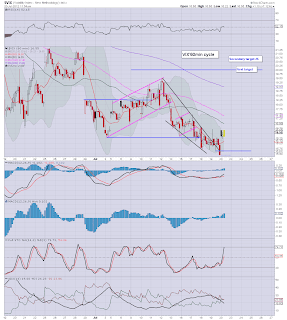 I am tired of today already, even the VIX move is mediocre, and until we see VIX 20+, any down moves are not to be trusted.
Posted by Trading Sunset at 16:56:00
Email ThisBlogThis!Share to TwitterShare to FacebookShare to Pinterest

11am update - breaking down

To close well, bears just need a close under 1370, which would be a clear break under the lower channel by the close of today. As noted earlier, the Rus'2000 index is already below that, and is actually also close to breaking the daily up cycle. 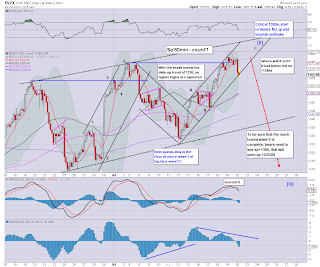 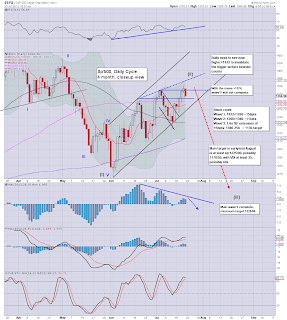 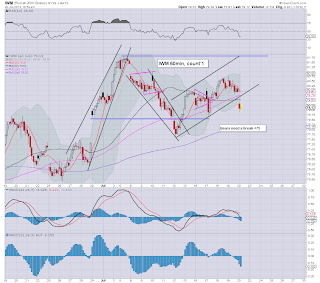 IWM was warning of trouble yesterday afternoon. Its clearly pretty low on its cycle right now, so..an intra-day bounce still very possible. Without question though, we do have a clear break on the R2K !

Its looking pretty good so far this morning. We've already seen one attempt at a bounce, which failed..and we're now close to breaking new lows for the morning.

Bears really need to see some good moves higher in the VIX. 5, 7%, just won't be enough to really be confident.

*I've been watching the Call chain for VIX options this morning, some pretty big blocks going through, which has been the case for the past 8 trading days actually.
Posted by Trading Sunset at 15:54:00
Email ThisBlogThis!Share to TwitterShare to FacebookShare to Pinterest

Bears are close to breaking the hourly cycle up channel. VIX is showing a moderate increase of +6%, but it is at least confirming the opening index declines.

*it should be noted, the hourly up channel has already been broken on the Rus'2000 index, which interestingly was also the one index that closed red yesterday. Is the R2K the leading warning again? 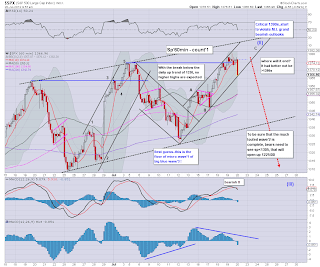 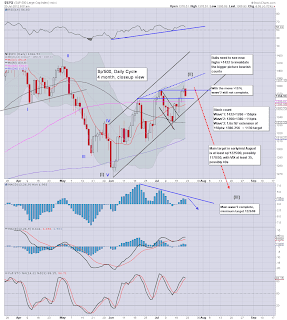 We're seeing a rollover on the daily MACD cycle, as I've been touting since the start of this week.

However, it is opex...we're more than likely to get a bounce by late morning.

Lets be clear, we could still close higher, the algo-bots  have been in a powerful melt-up mode this past few days. There has also been some kooky action by the bots in stocks like MCD, IBM, and KO.

More later
Posted by Trading Sunset at 14:55:00
Email ThisBlogThis!Share to TwitterShare to FacebookShare to Pinterest 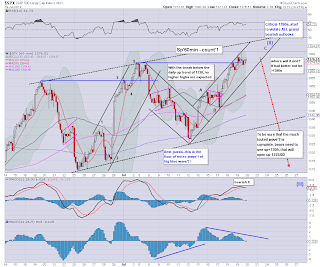 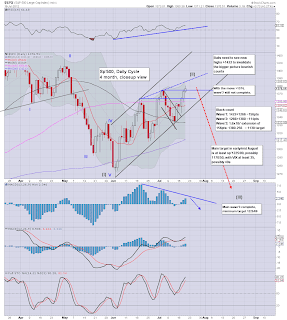 Bears should seek a close under sp'1370, with VIX up at least 5% or so. That would be acceptable to close the week..and sets up next week for some real action to begin.

Good wishes for Friday trading!
Posted by Trading Sunset at 13:17:00
Email ThisBlogThis!Share to TwitterShare to FacebookShare to Pinterest

Despite the continuing ramp in the US indexes since the June low of sp'1266, the world indexes remain in what is a completely bearish formation.

*VEU is a good means to follow the world indexes (it excludes the US market), much like the GDOW does.
-- 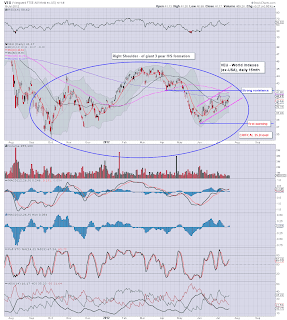 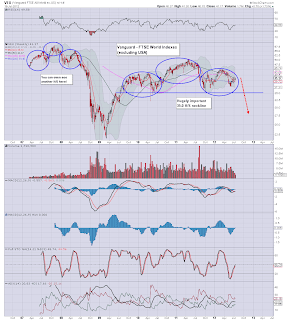 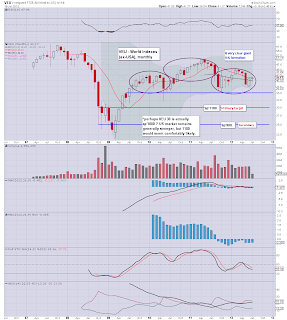 We have a nice bear flag on the daily chart, and the weekly chart shows this too. First bear target is 37.50 and then 35.0. Equivalent levels for the US index are noted on the monthly chart.

The next 6 trading days will be important for the bears. We have the big Q2 GDP data next week for both the US and the EU. If the bears can't begin a new down trend by the end of next week..then the bigger monthly cycles are going to level out and turn bullish.

The main market did close broadly higher today, but there were a few minor signs that things are getting way over-stretched/exhausted, most notably in the Rus'2000 small cap index. The R2K is often the craziest/most volatile index, usually leading the way..both higher..and lower. Today though, the R2K closed marginally red.

What is clear though, there is not even an initial sign of a turn lower yet, with the VIX supporting that view. 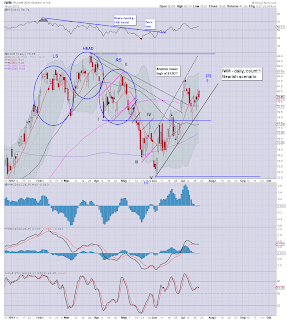 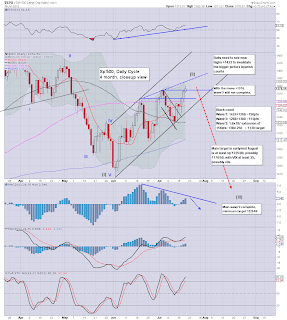 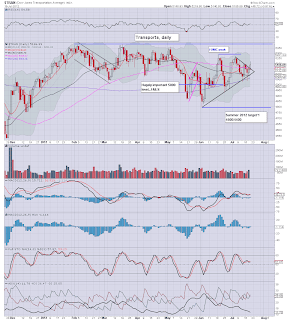 Transports saw a significant break higher in the morning, the sort of move the bulls will need in the days ahead. After all, the bigger monthly/weekly cycles are still a problem, and the bulls have to keep pushing higher, or the bears should (in theory) be able to seize downside momentum back.

The sp' similarly remains in an uptrend, only a break below the lower channel of 1350 would be the first sign of trouble. Upper channel resistance is around 1385/90.
--

Recommended reading - a good posting on the VIX from Zerohedge, a pretty fair viewpoint on the current latest bout of deluded lunacy that is 'the market' that we still try to be a part of.

To be clear, unless I see a few closes over sp'1390, I'm still clinging onto my broader bearish outlook, but we are getting down to a buffer zone of 10pts or so. The big bearish summer 2012 outlook..is indeed on the edge of being thrown in the trash bin. Maybe thats a sign the top is in? Urghh.