It was a week of morning gains, but intraday reversals for the US equity indexes. Most indexes saw net weekly declines, lead by the R2K and Nasdaq, lower by -3.5% and -2.8% respectively. Equity bears just need to break <sp'1830, to open up a possible test of the lower weekly bollinger band. 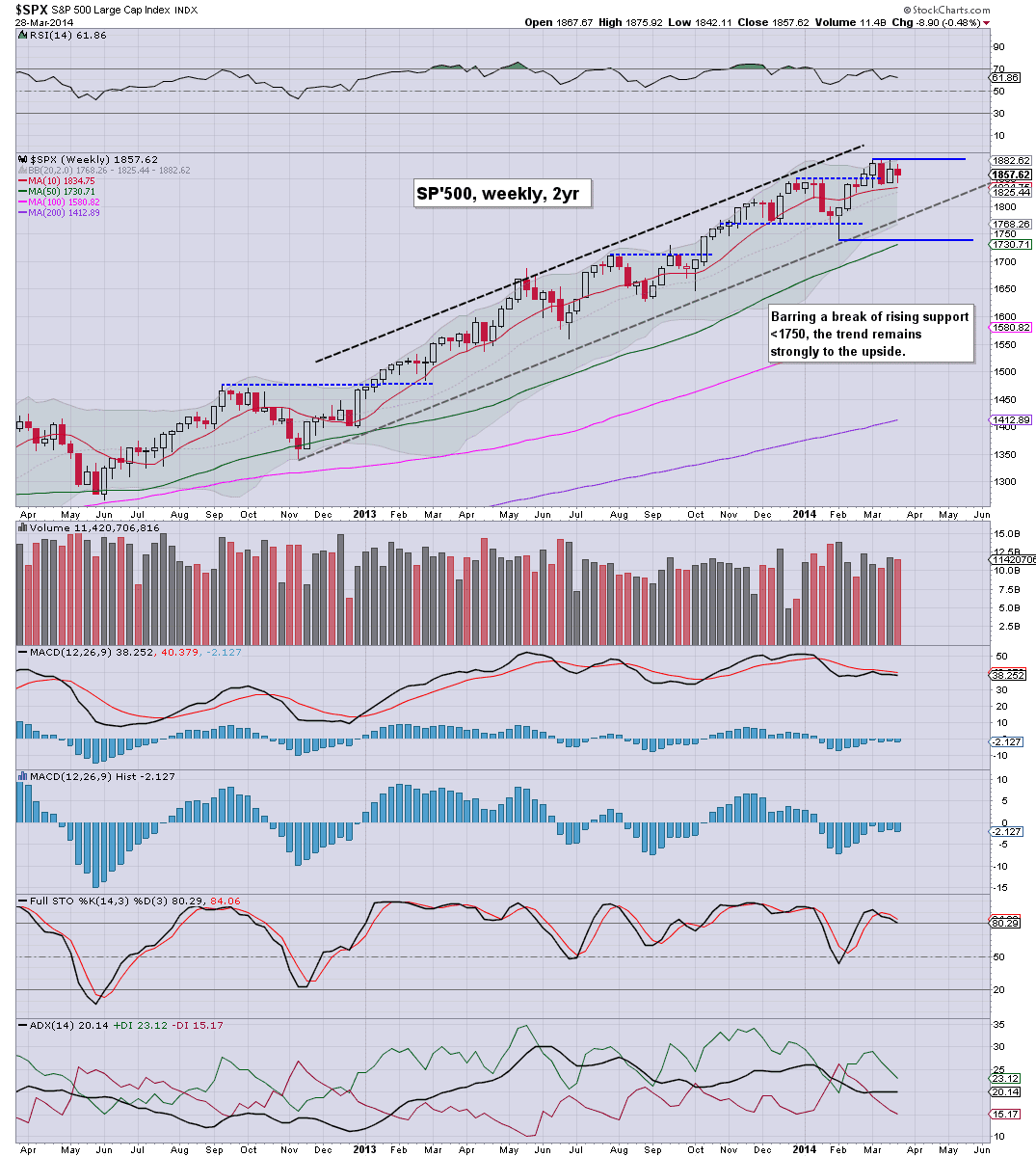 There is key rising support, in the 1790/70 zone.. where the lower weekly bollinger is lurking. I do not believe a move <1750 (the monthly 10MA) is viable before May/June, and even that will be difficult.

Considering the many opportunities to have broken >1883, the bulls look to have used up all their chances, and I am thus seeking a break <1830. 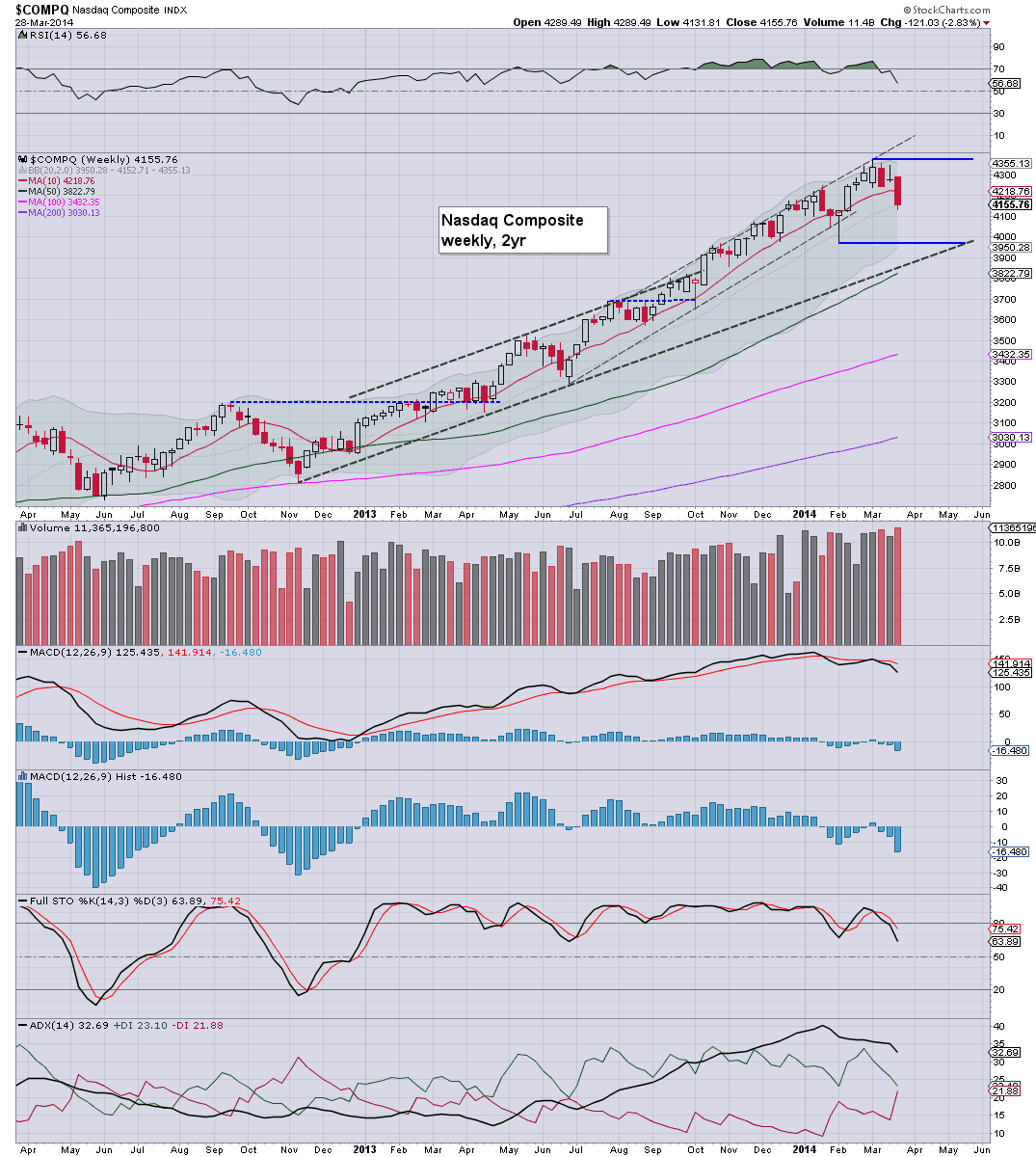 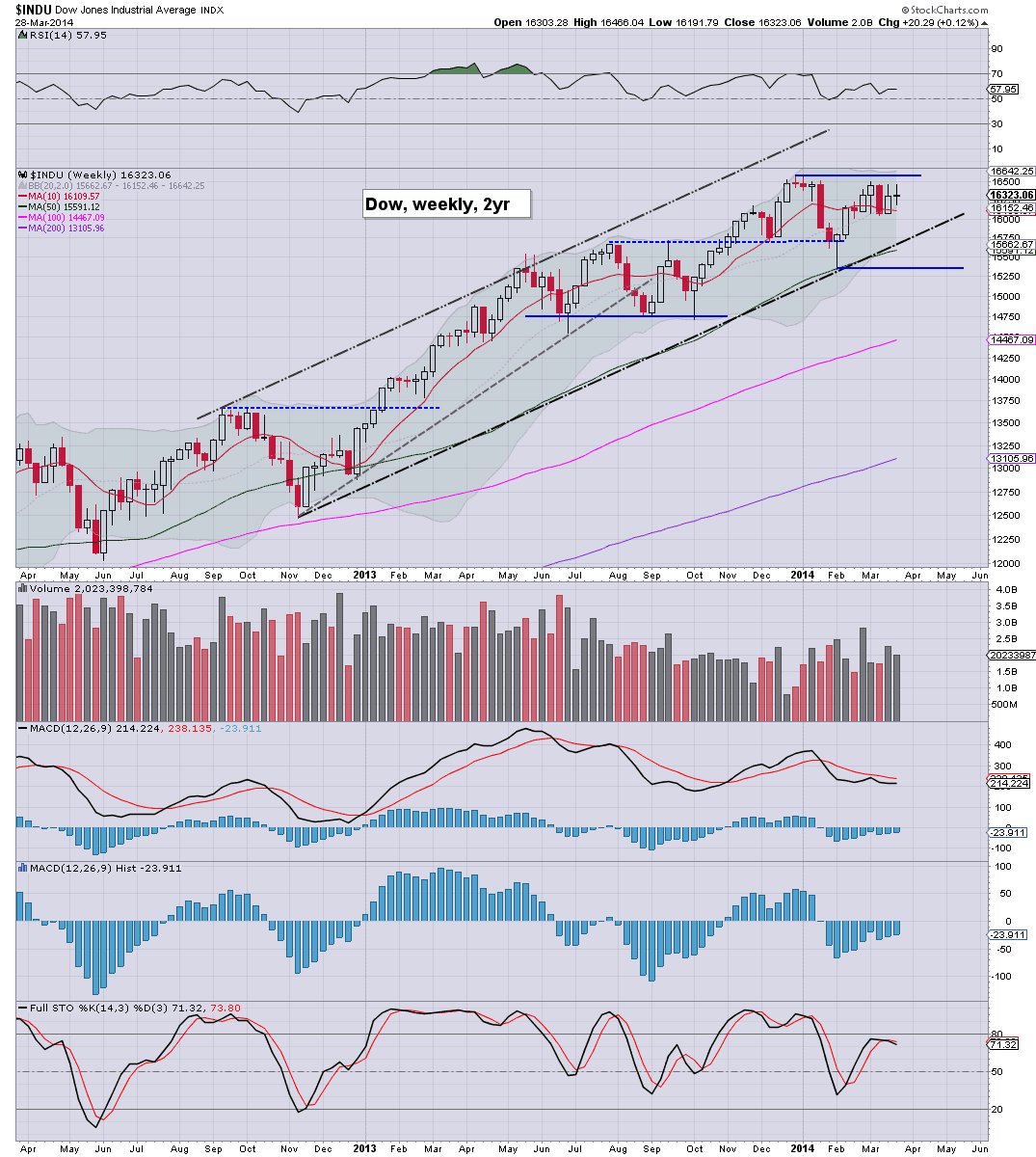 The mighty Dow managed a fractional gain of 0.1%...a doji candle of 'indecision'. We have a choppy top, spanning five weeks, and first downside target remains 16k.. a break of that opens up 15800/700s, which is viable next week.

For those curious, if we do see an intermediate'3 top this spring/summer, a multi-month decline would target 14000/13500 or so. The 12000s look overly low..and out of reach, even if the market is really annoyed at the QE withdrawal. 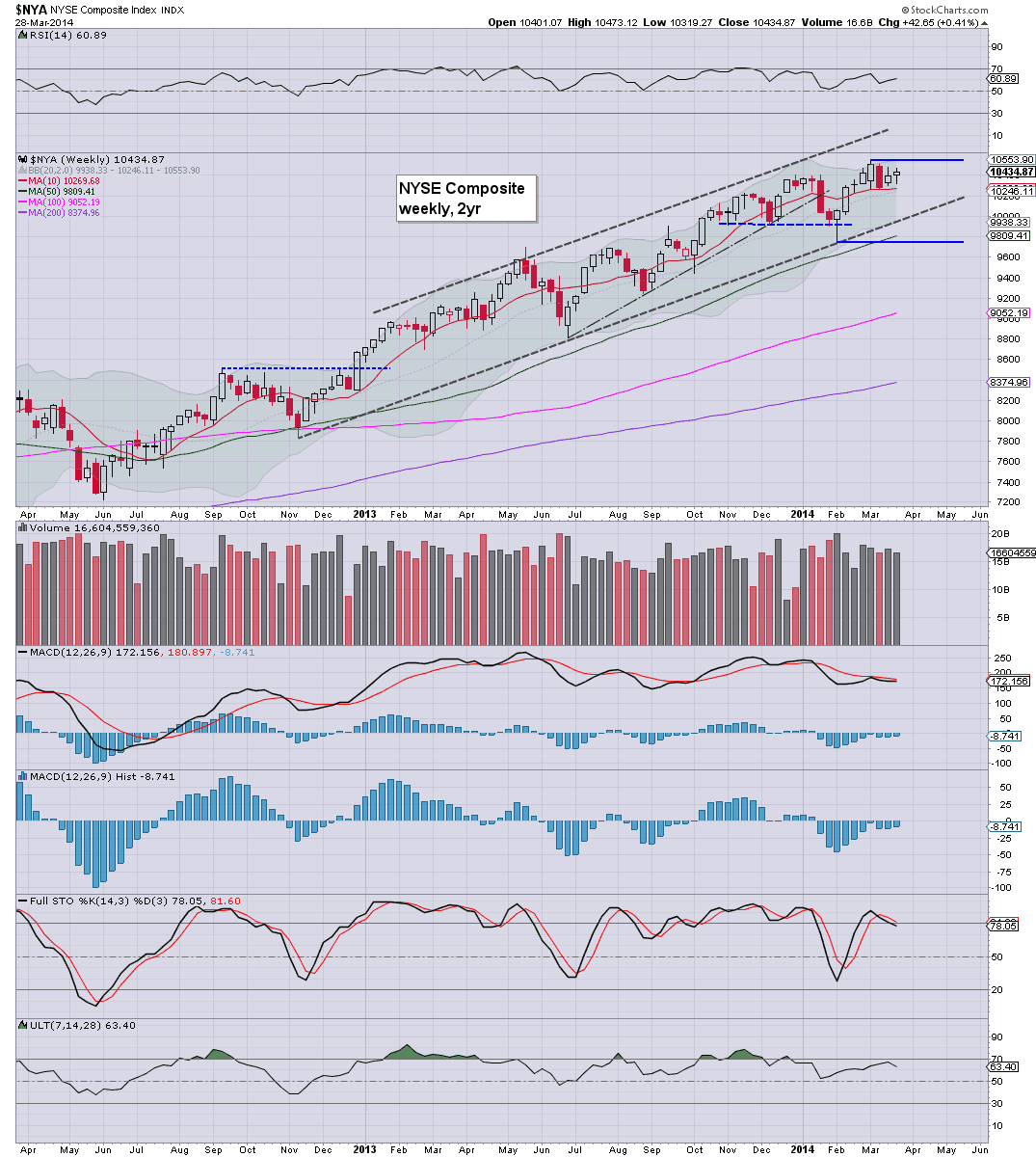 The master index climbed a moderate 0.4%, but remains stuck..along with the rest of the market. Near term outlook offers downside to around 10000, perhaps 9800. 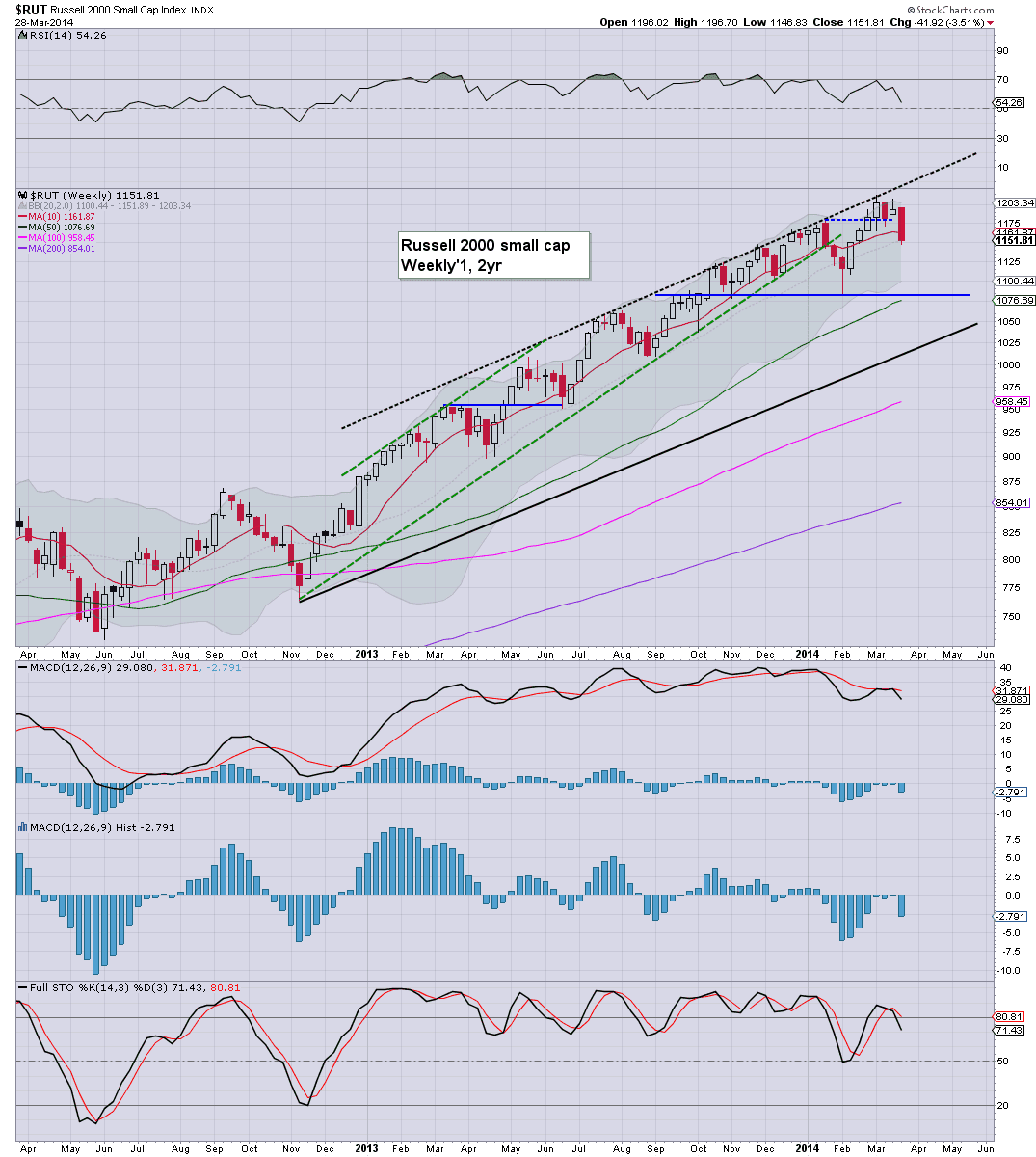 The second market leader fell a powerful -3.5% this week, with the most bearish weekly candle since May 2012. There is near term downside to 1100/1075, which would be a near full retrace of the Feb/March rally. R2K in the 1300s looks difficult this spring, and if we hit the lower weekly bollinger in the current wave, then it is possible that 1213 was a key inter'3 top. 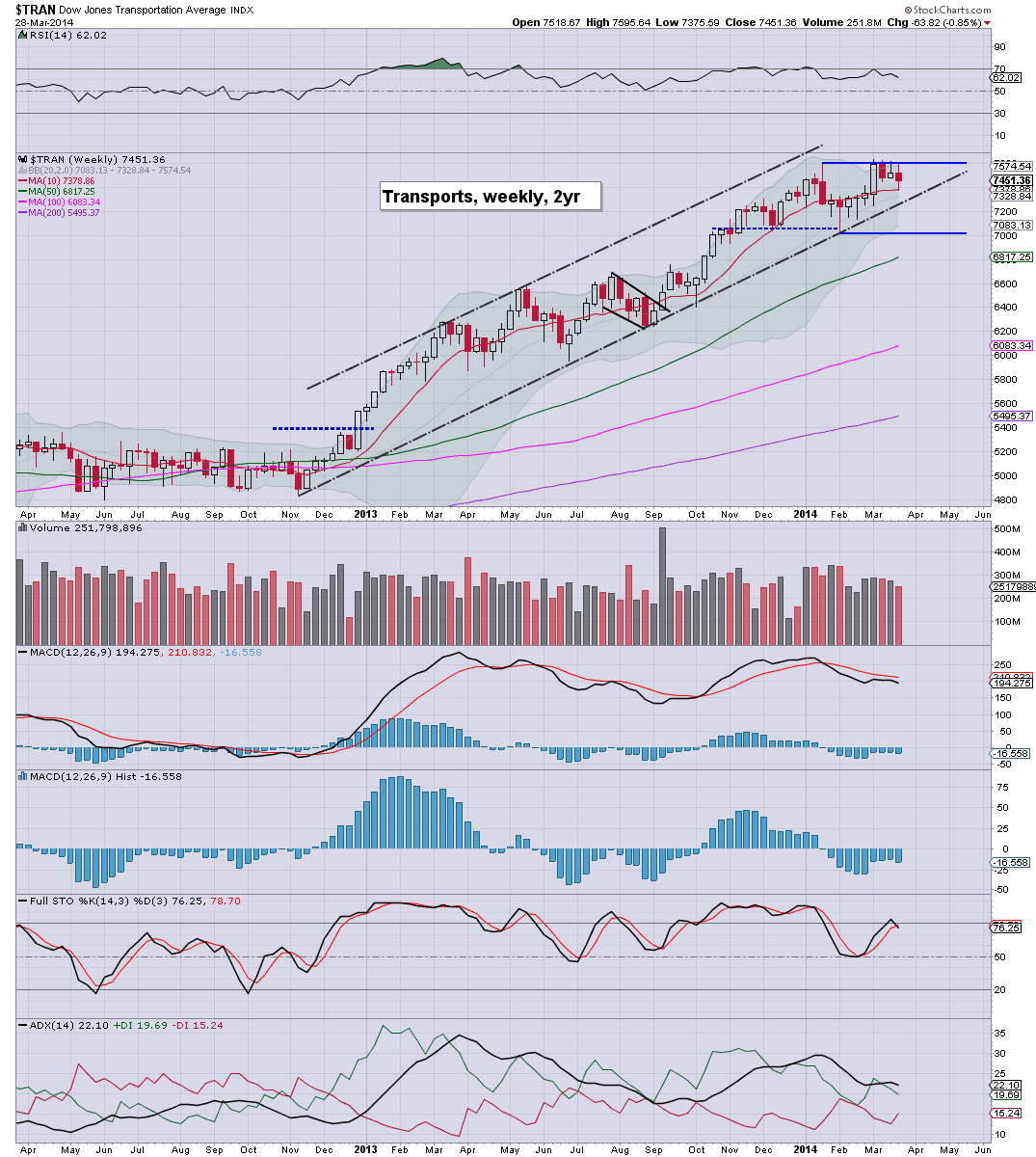 It was a week of intraday reversals, although you'd not know it, if were you just looking at the weekly R2K/Nasdaq charts, which saw pretty major declines.

Lets be clear, we've just seen net weekly declines, which are the most bearish since summer 2012. Price action IS different from what we saw across all of 2013.

From a trading perspective, it remains a simple situation. Bears can be short, with short stops at the recent highs, whilst prospective longs, should arguably be waiting for a new high to occur, before chasing it higher. Well, that is how i see it anyway.


The next big retrace?

The following assumes sp'1883 - a micro double top, was a key intermediate' 3 high. However, until we hit the lower weekly bollinger, bounce, and put in a lower high, bears can't be confident of the bigger picture. 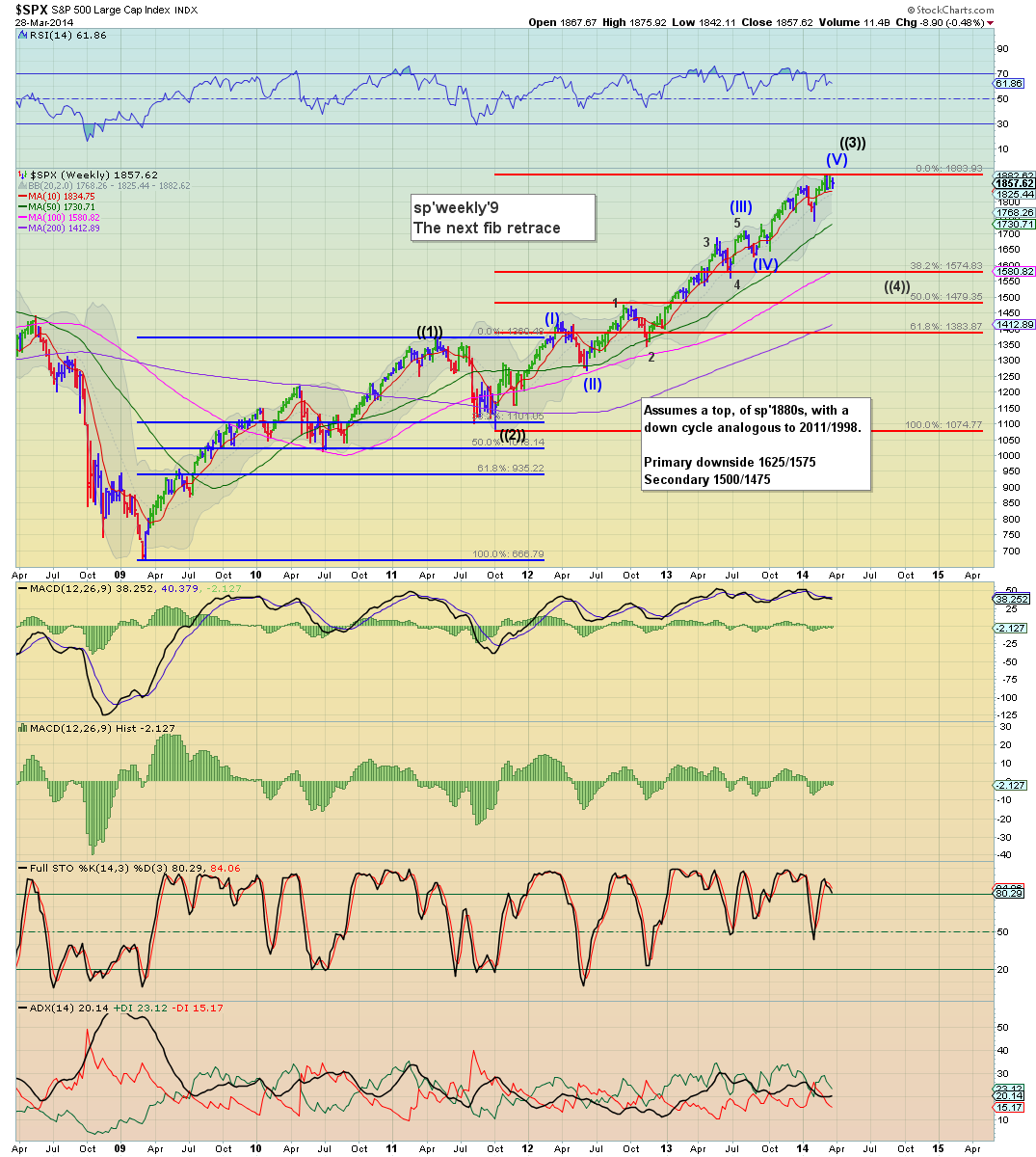 The week begins with Chicago PMI, and Yellen is due to speak, although I don't believe the latter will be overly market moving.

Tuesday has another trio of data, but more important, Wed' will see the ADP jobs data and factory orders. Thursday has some data, but Mr Market will be far more focused on the next monthly jobs data..due Friday, 8.30am.

*There is no sig' QE Monday. The next QE schedule is issued next Monday at 3pm, so its possible we might see sig' QE on Tuesday.
--

As ever, comments are most welcome, especially if you wish to challenge my near term bearish outlook.

Back on Monday :)
Posted by Trading Sunset at 16:00:00
Email ThisBlogThis!Share to TwitterShare to FacebookShare to Pinterest

Despite a sixth opening equity bounce, the US market ended the week on a somewhat weak note. Across the week, most indexes closed with net declines, lead by the R2K and Nasdaq, lower by -3.5% and -2.8% respectively. 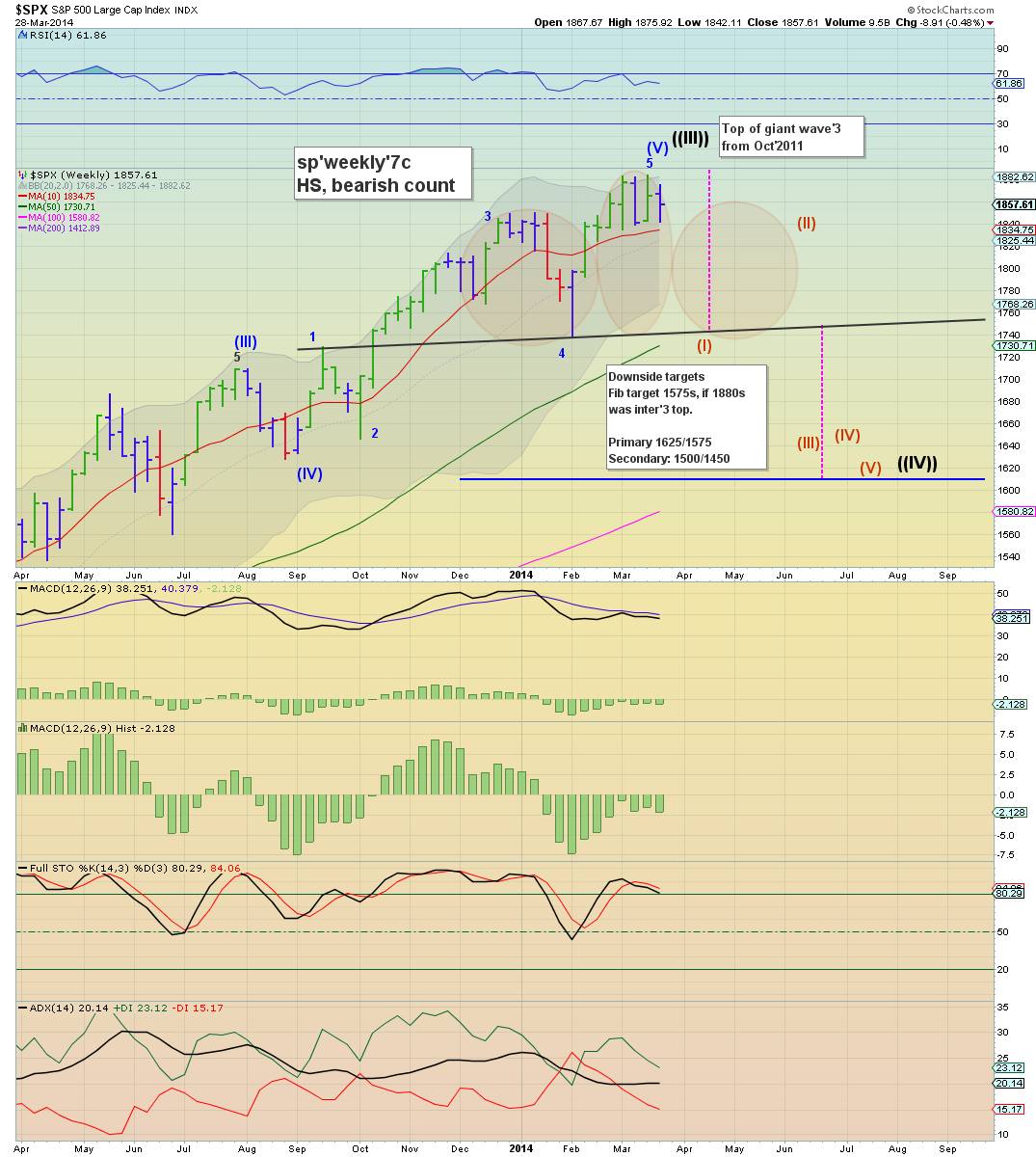 So...we closed the week with a blue candle, a provisional 'warning of trouble' in my view. We have traded within a pretty tight trading range for five weeks now, and it won't last much longer.  Underlying MACD (green bar histogram) ticked lower this week, and price pressure remains moderately bearish.


Best near term outlook for the bears, remains the following... 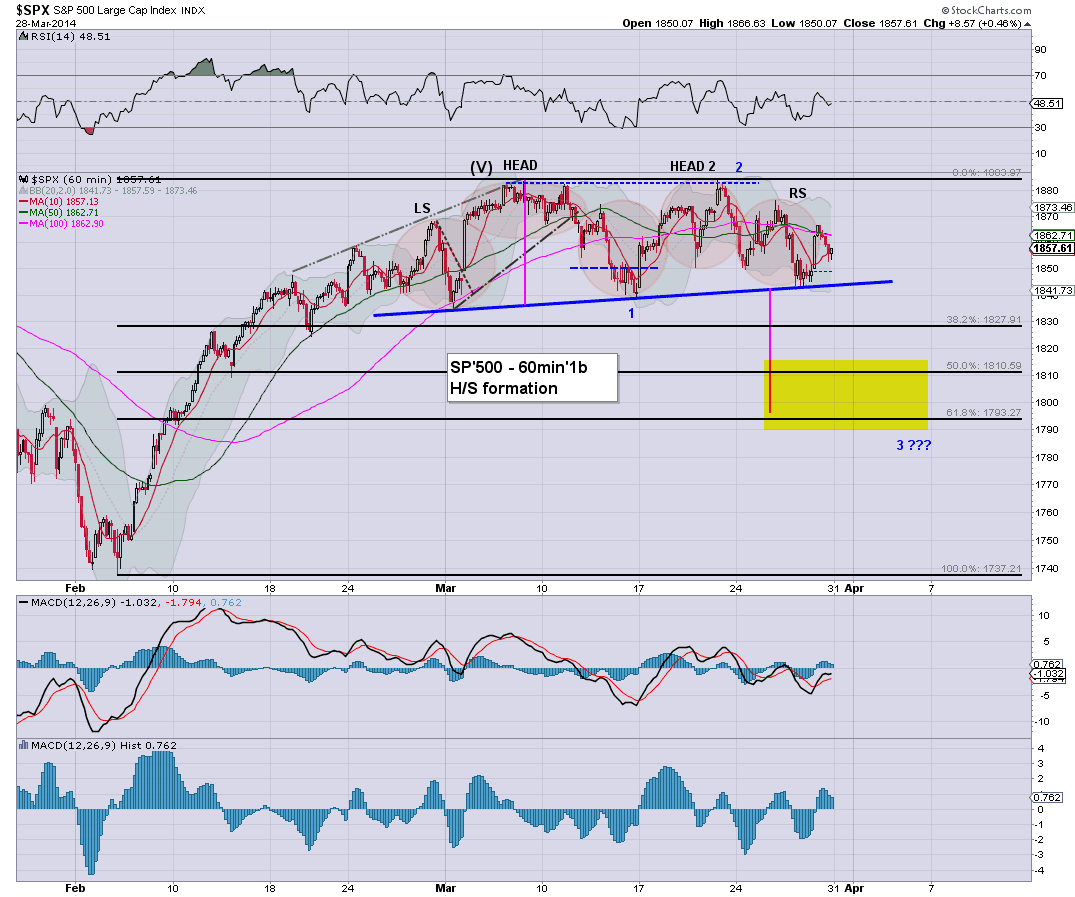 For the above scenario to have any hope, we need a simple break of the neckline, but bears shouldn't be overly confident until <1830.

Thanks to all those who said hello this week, it makes all the difference.

Goodnight from London
--
*the weekend post will be on the US weekly indexes
Posted by Trading Sunset at 03:00:00
Email ThisBlogThis!Share to TwitterShare to FacebookShare to Pinterest 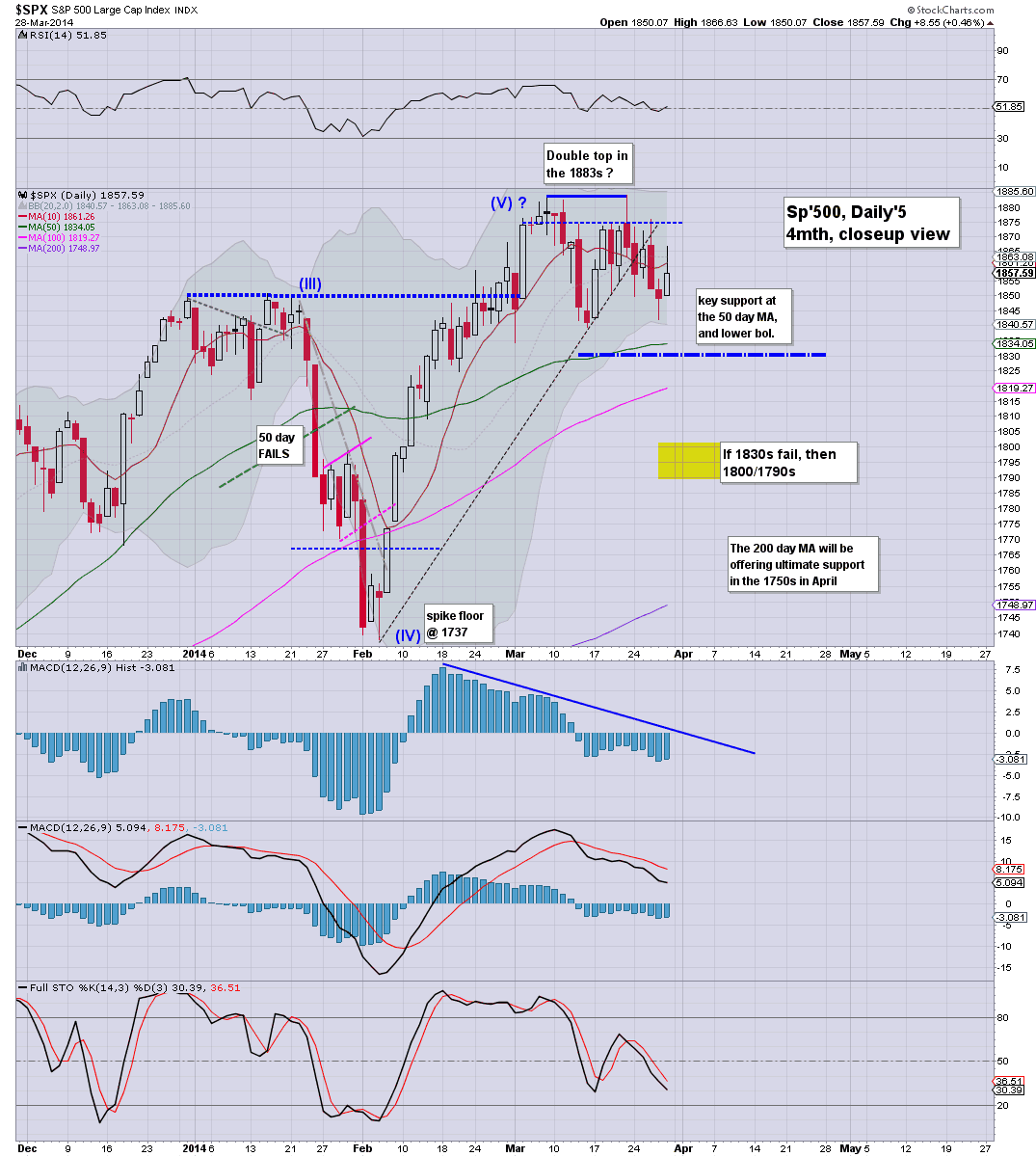 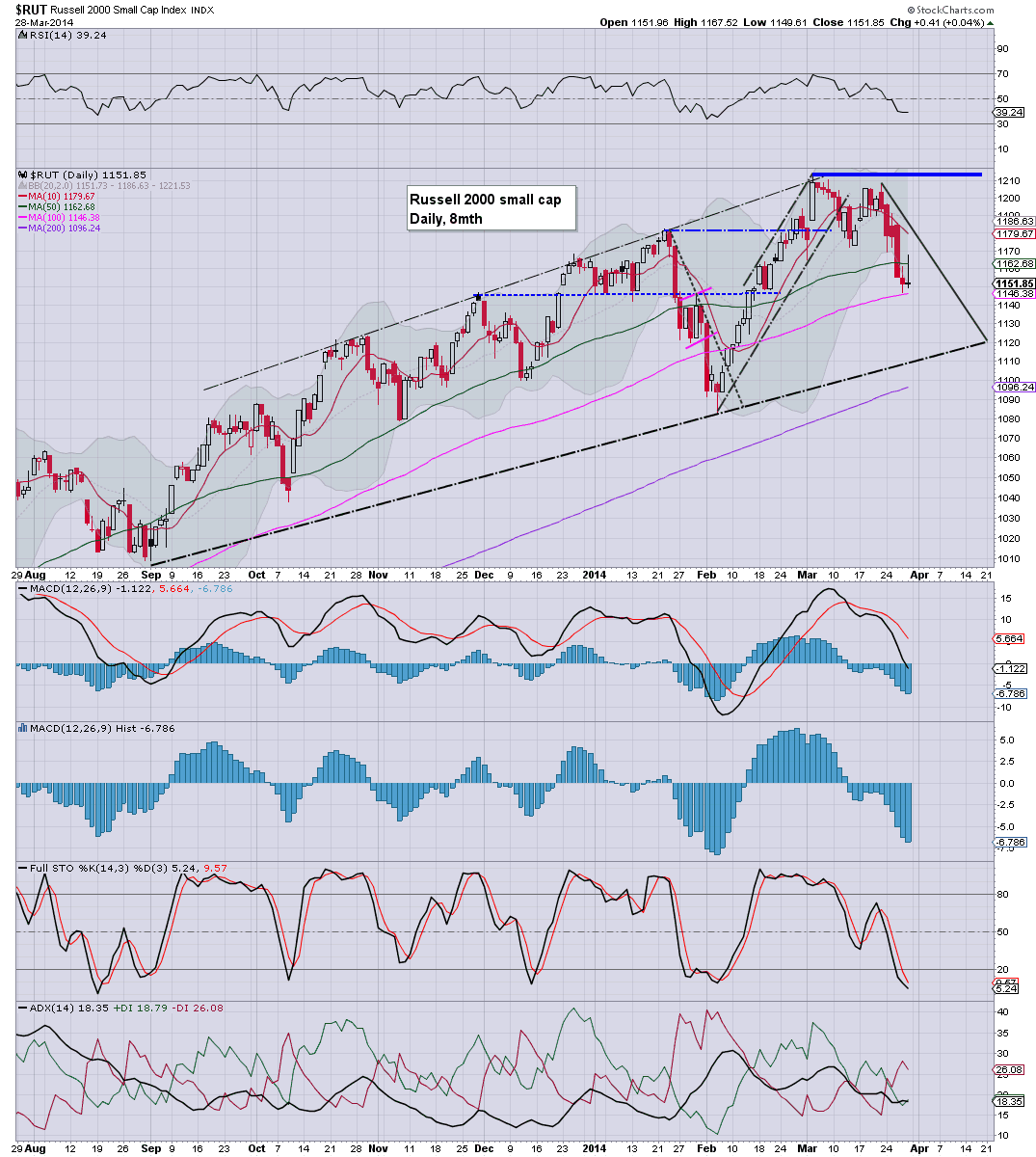 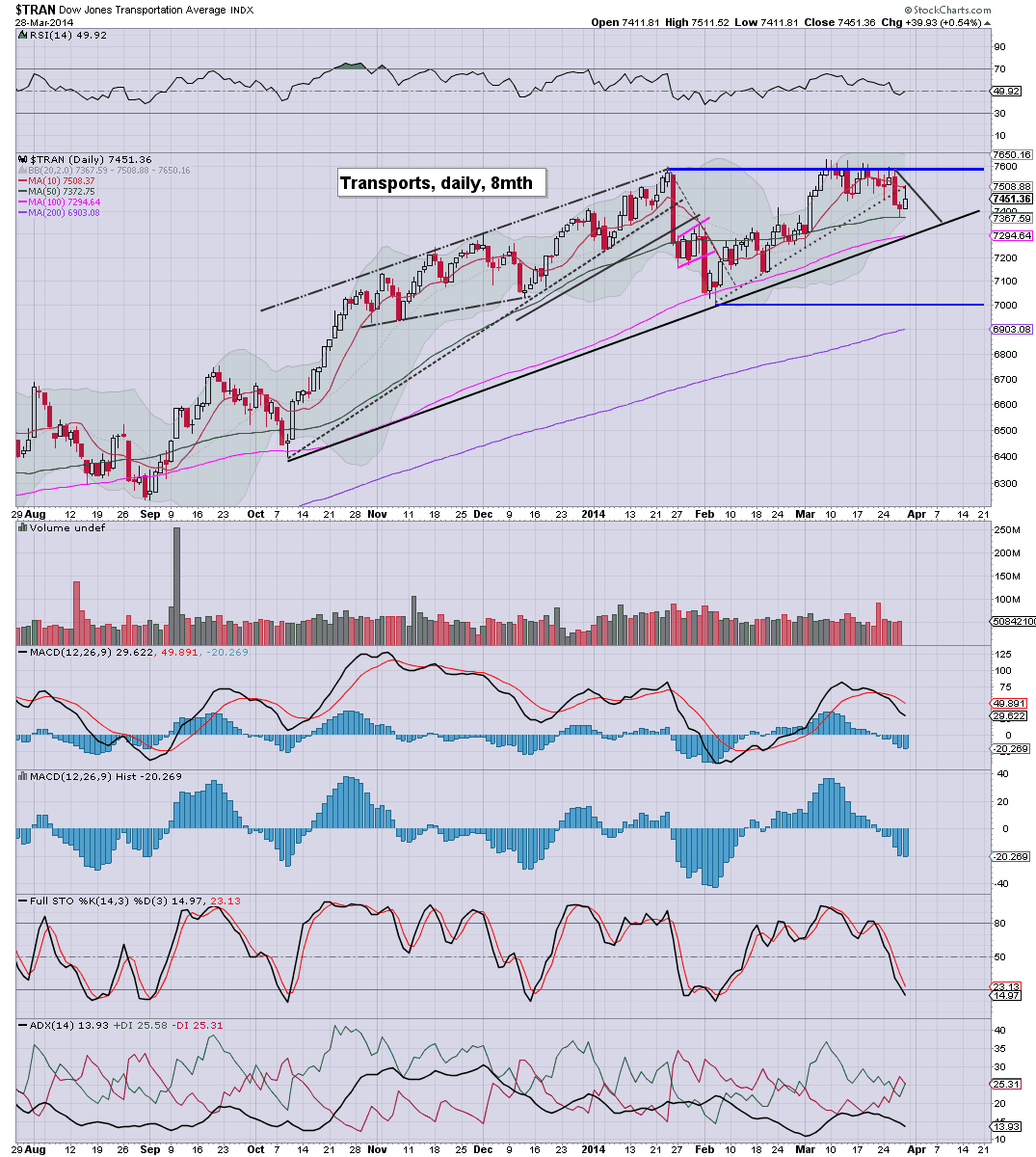 The weakness in the two leaders remain good an important warning of trouble for the broader market. The general weakness does bode for a break <sp'1830 next week, which should open up a further 2-3% downside.

Just look at the Transports, see all the little spikes into the 7600s, but the market just can't break higher. Yes, there is trend support around 7300, but were that to fail, then a full retrace of the Feb/March rally could occur... back to 7000.

Underlying MACD (blue bar histogram) cycle remains strongly negative on all indexes, and it'd be surprising if we don't eventually break <1830, which should result in a large one day 'washout' move of sp -30/40pts.
-