Will the lunacy continue ?

The rally since the June low of sp'1266 was natural up until around last Thursday 3pm, when we saw a hyper ramp begin from 1313 to the current level of 1374. That meaningless nonsense ramp has kicked the bulls back into a confident frame of mind. After all, we're now headed for new index highs..right? 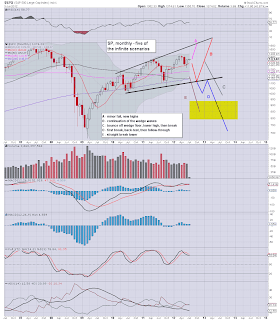 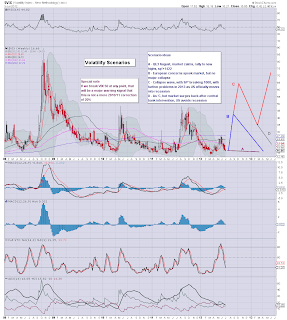 The bulls have seen the turn higher they desperately needed. If July can close positive, even just a little, then index scenario A' would appear likely, even though that would be even more twisted an outcome than the previous summer ramps of 09, and 2010.

Yet, if this ramp stalls in the next few days or so, then there is no reason why the original target of low sp'1100s is still not viable. The bears probably do need a major catalyst though to kick things off, I'm not sure if the market will really care what the jobs number is this Friday

I suppose its possible we're back to that kind of shameful and sick market. It seems the delusion that 'everything is gonna be okay' still persists 90% of the time within the minds of most.

We do have some econ-data tomorrow and Friday, so it will at least be marginally more interesting than the graveyard session that was Tuesday.

Goodnight
Posted by Trading Sunset at 23:48:00
Email ThisBlogThis!Share to TwitterShare to FacebookShare to Pinterest

Oil - the cause of many a revolution

Whilst the USA revels in the belief that its still the most ethical, moral, and 'freedom-filled' nation on Earth this independence day, lets take a look at a substance that arguably causes more war than just about anything out there....  Oil. 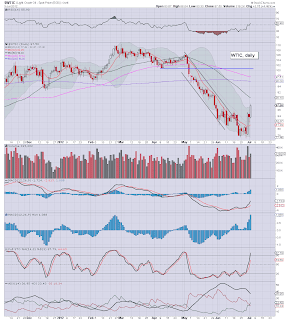 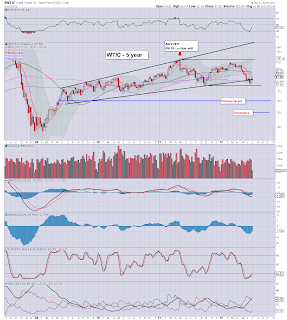 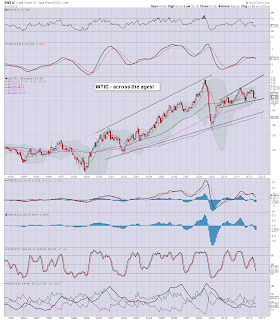 Since last Thursdays hyper-ramp began for no good reason, Oil has jumped around 15% in just three trading sessions. That's got to be a good sign of 'stability' in the world commodity markets right?

First resistance is around the 50 day MA at $90..although this MA is falling fast, so by late Friday it might be as low as 89. The weekly chart shows resistance at the 10MA of $88, and you could argue we currently have a bear flag.

Now, if you look back to the 2008 collapse wave, the first major attempt to battle back in Sept'08 failed at both the 10 and 50MA (currently $94). Considering the wider market, I can NOT see Oil breaking over $95 at all this summer, baring an 'event'.


The Bernanke can't do QE3 this summer

To think that many still believe Bernanke will initiate QE3 this summer, its bizarre.If QE3 was launched, Oil would soar, and many recognise Oil would then probably make a challenge of the $147 summer 2008 high.

Benny knows this of course, and despite the signs of a weakening US and world economy, he is still not spinning up the printers...yet. He will wait, but then the Fed is ALWAYS reactive, it never pre-empts, and that remains something just about everyone still seems to forget.

Lets be clear, if the markets do break lower later this month, look for Oil to break $76...that will open the door to $60..which of course would be something of a surprise to many traders.

So, enjoy your Burgers and Fries today, freedom lovers*

More later in the evening.
---
*just be sure not to carry a copy of the constitution on your person at any time, or you could end up on the DHS 'terrorist watch list'.
Posted by Trading Sunset at 16:02:00
Email ThisBlogThis!Share to TwitterShare to FacebookShare to Pinterest

Be mindful of the Tranny

The transportation index remains stuck in a tight range since the start of the year - although it has briefly spiked lower in May and June.

What is critically important to the rest of this summer, and 2012..is which direction the transports eventually takes. 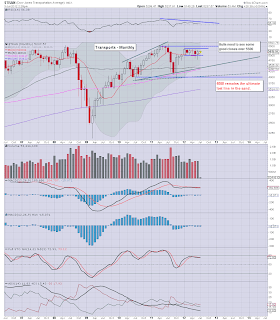 From a cycle perspective, the indicators are still relatively bearish. There is nothing bullish yet, its all been chop since January, in a relatively tight range - especially relative to the other indexes.

Arguably, anyone looking for a market collapse will need to see the transports under 4k. Of course, that is 20% below current levels, which would make for an official 'bear market'. A 4k break would probably lead to 3500, but that is indeed right now mere 'crazy talk'.

First things first....lets see where we close in July, a close either side of the current range..will be VERY important to be aware of.

--
*..and for those in the USA, enjoy your independence day. Wednesday is indeed your special day to celebrate your freedom from your once all powerful British Royal overlords.
Posted by Trading Sunset at 02:00:00
Email ThisBlogThis!Share to TwitterShare to FacebookShare to Pinterest
Newer Posts Older Posts Home
Subscribe to: Posts (Atom)