With equities sliding across the day, the VIX battled higher, settling +8.3% @ 12.56. Equity bears should be mindful that the VIX has got stuck at a gap level from May'21st. There is high probability that the VIX will resume lower into the weekend... and the first half of next week. 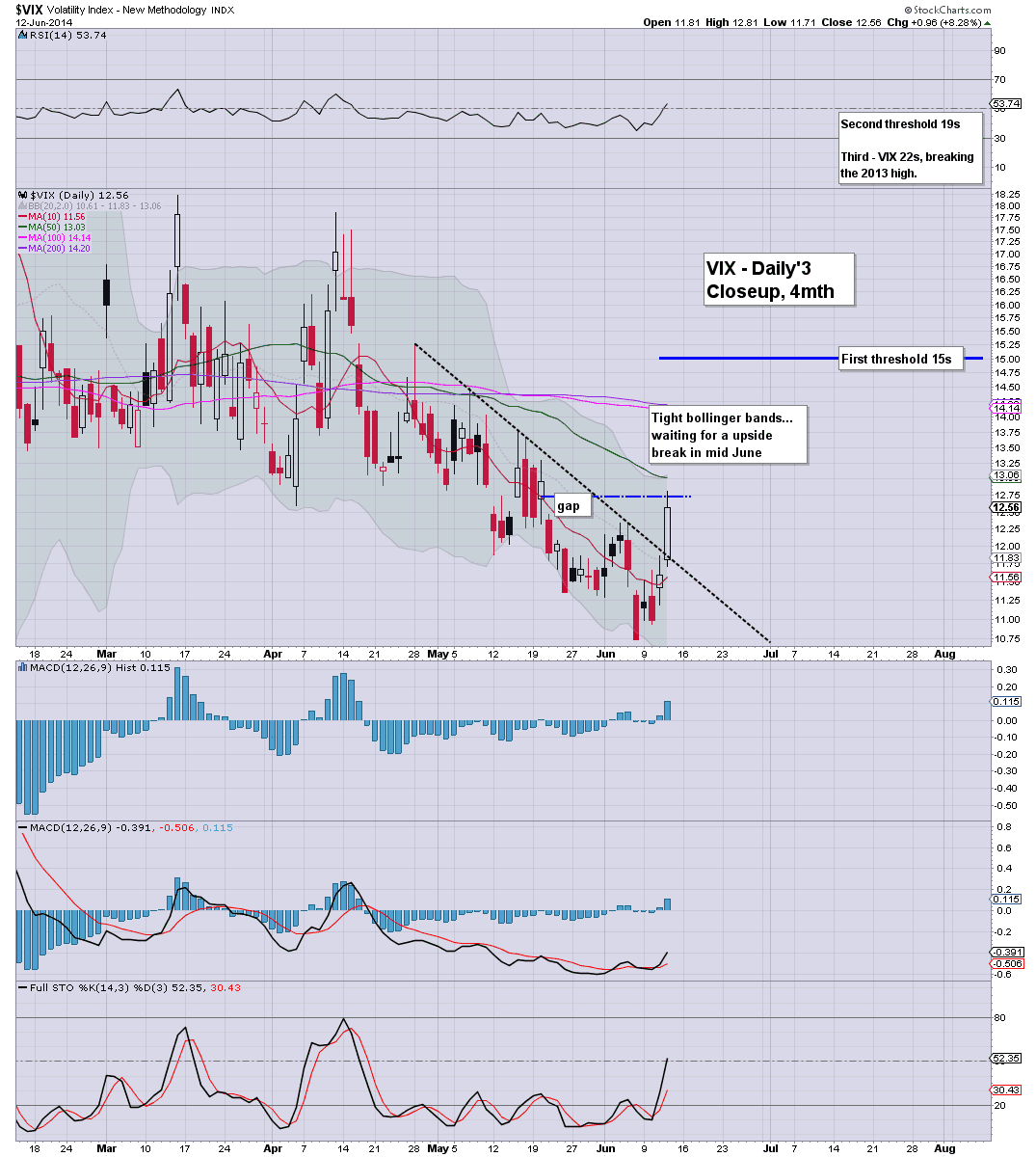 So..we have a clear break of the declining trend..and we're back in the mid 12s.

A fair few were looking for a low in equities this pre-opex - Thur/Friday..and if equities have indeed floored @ sp'1925, the VIX is set to melt lower for the next 2-5 days.

After the next FOMC of June'18, I could see VIX spiking into the 14/15s...but no higher, at least this month.
--
more later..on the indexes
Posted by Trading Sunset at 23:00:00
Email ThisBlogThis!Share to TwitterShare to FacebookShare to Pinterest

US equities were very weak across the day, sp -13pts @ 1930 (intra low 1925). The two leaders - Trans/R2K, settled lower by -1.9% and -0.6% respectively. Near term outlook remains unchanged, with renewed upside into the FOMC announcement of next Wednesday. 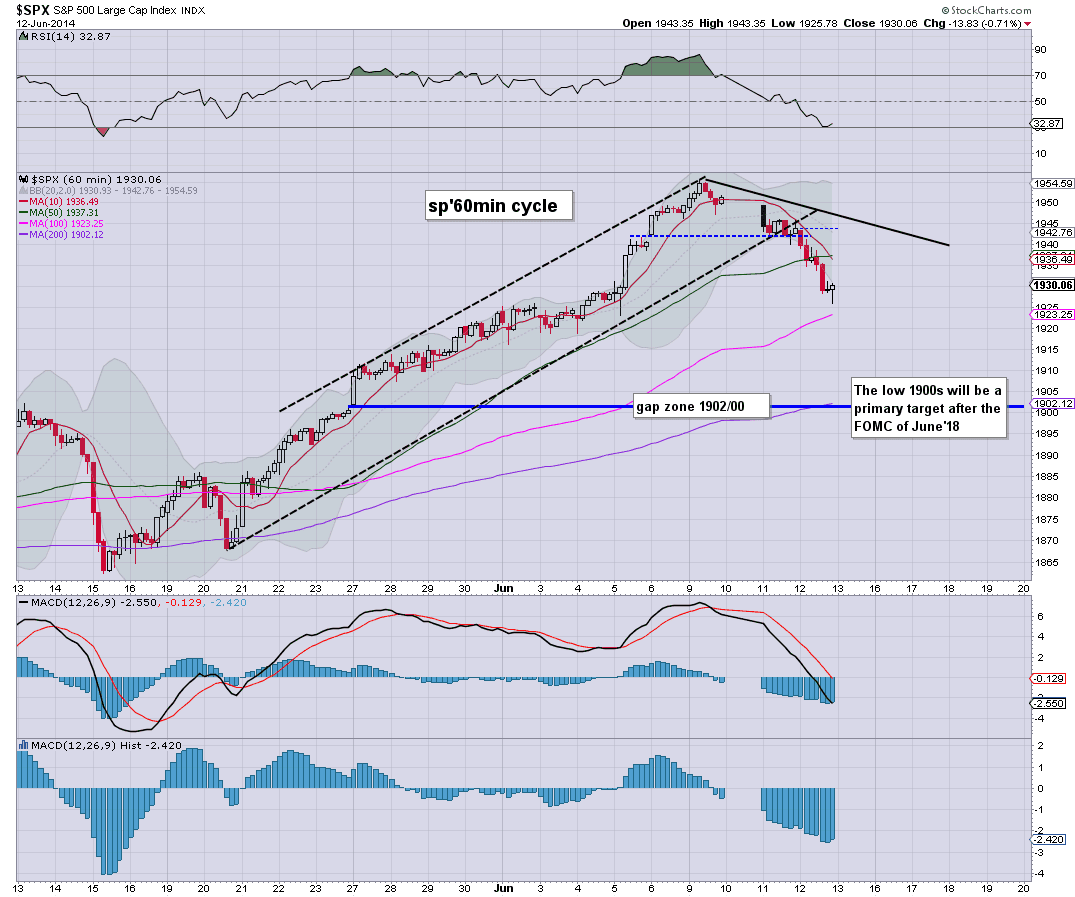 --
*I hold long overnight, CHK, an index long, and WFM.
Posted by Trading Sunset at 21:01:00
Email ThisBlogThis!Share to TwitterShare to FacebookShare to Pinterest

Whilst equities attempt to stage a late day recovery into the close, with strong gains for Oil and Gold, there are more important things to be focused on... Brazil vs Croatia, due to begin at 4pm EST. Match'1 of 64, that will occupy the minds of many into mid July. 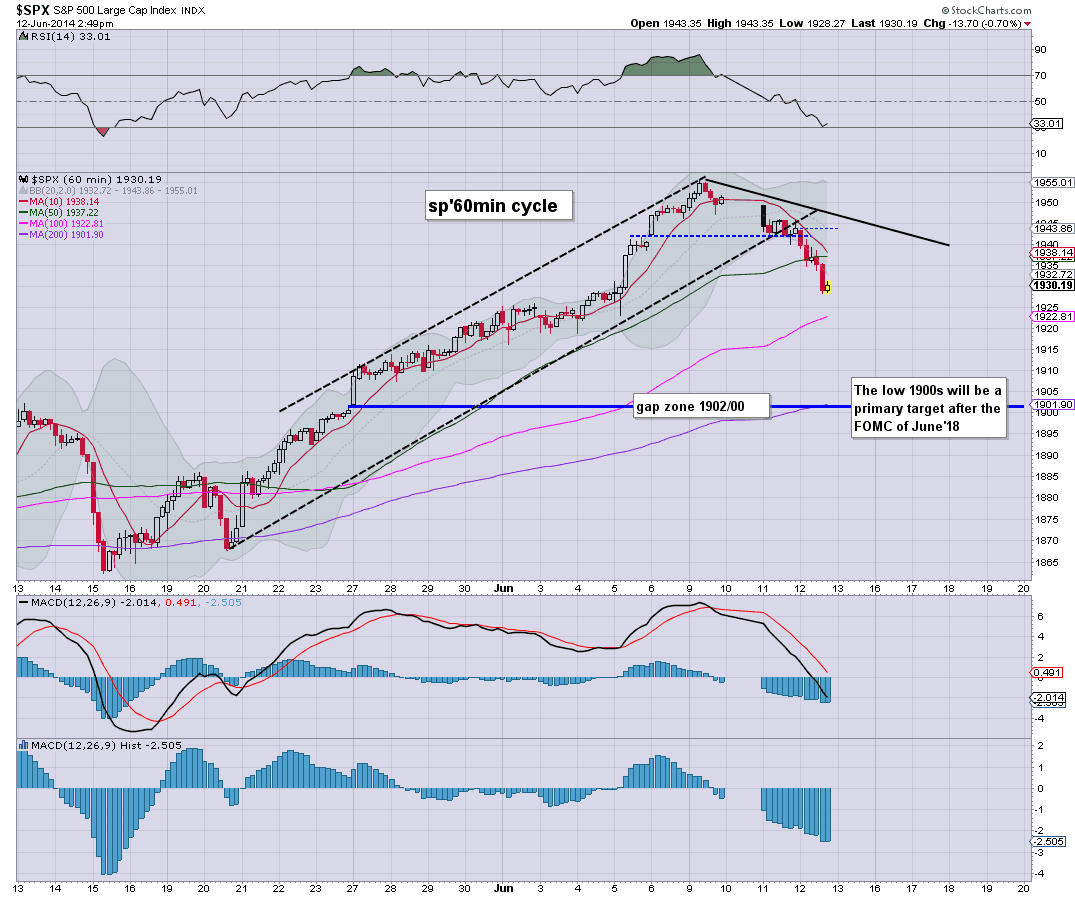 *I will hold LONG overnight, via CHK, an index long, and WFM.
--

Despite falling over 10pts below my target floor of 1940, I'm holding to the original outlook, broader upside into the FOMC of next Wednesday.

Whether you want to call today a sub'4. D, or whatever...I have to think we'll push higher from here.

updates into the close..as necessary.... although my attention is switching to the opening game! 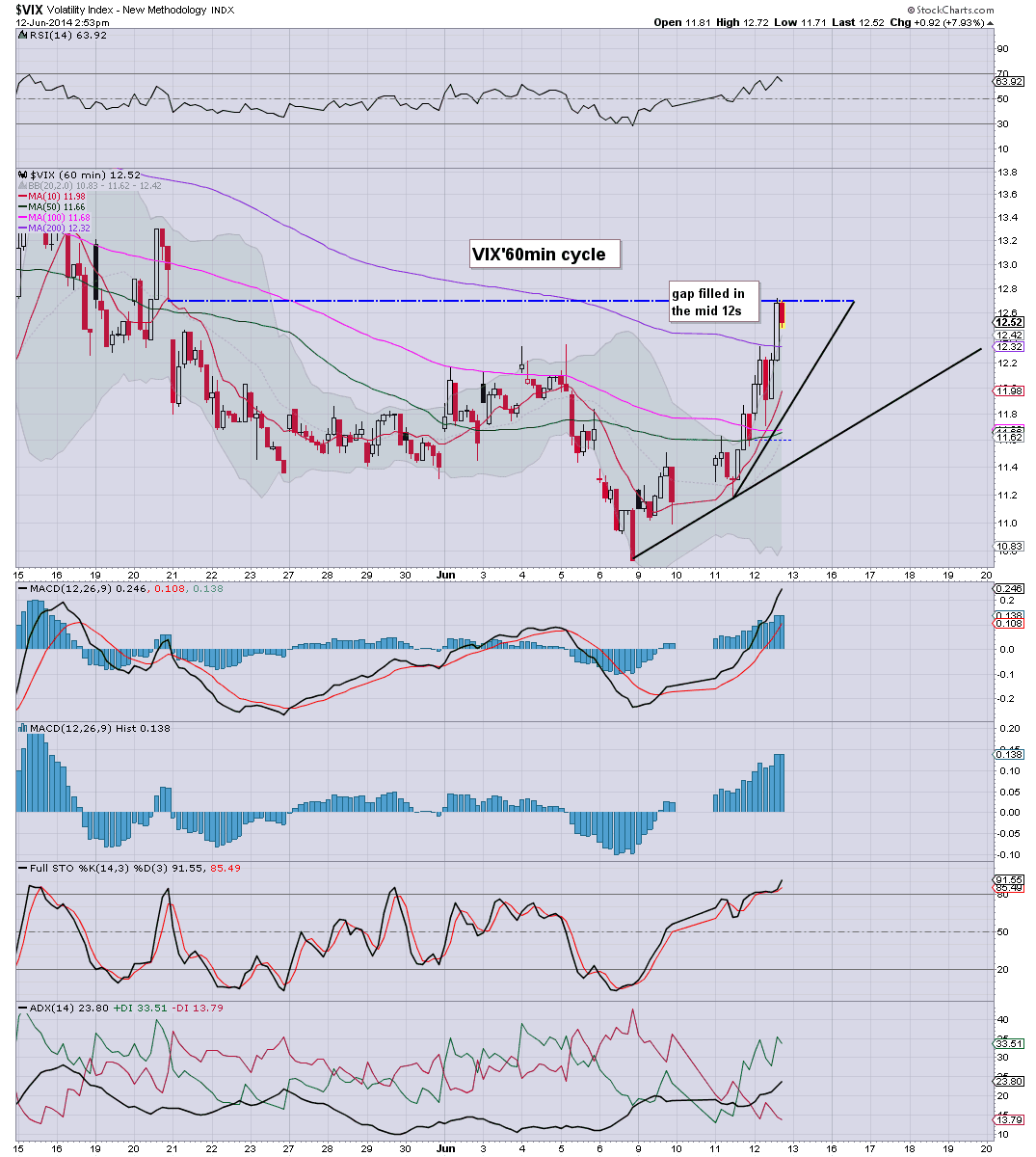 Overall, equity bears got a better level to exit, and bulls got a good level to buy, everyone is happy..yes?
-


3.45pm.. Transports, -2.1%, biggest one day fall since early February.. Hmmmmm
Posted by Trading Sunset at 19:51:00
Email ThisBlogThis!Share to TwitterShare to FacebookShare to Pinterest

US equities have failed to hold, and are again on the slide, a rather consistant one. Next support on the sp'500 is the 1925/20 zone, which itself is a mere 1% above the somewhat critical 1900 threshold. Oil and Gold are both holding earlier gains. 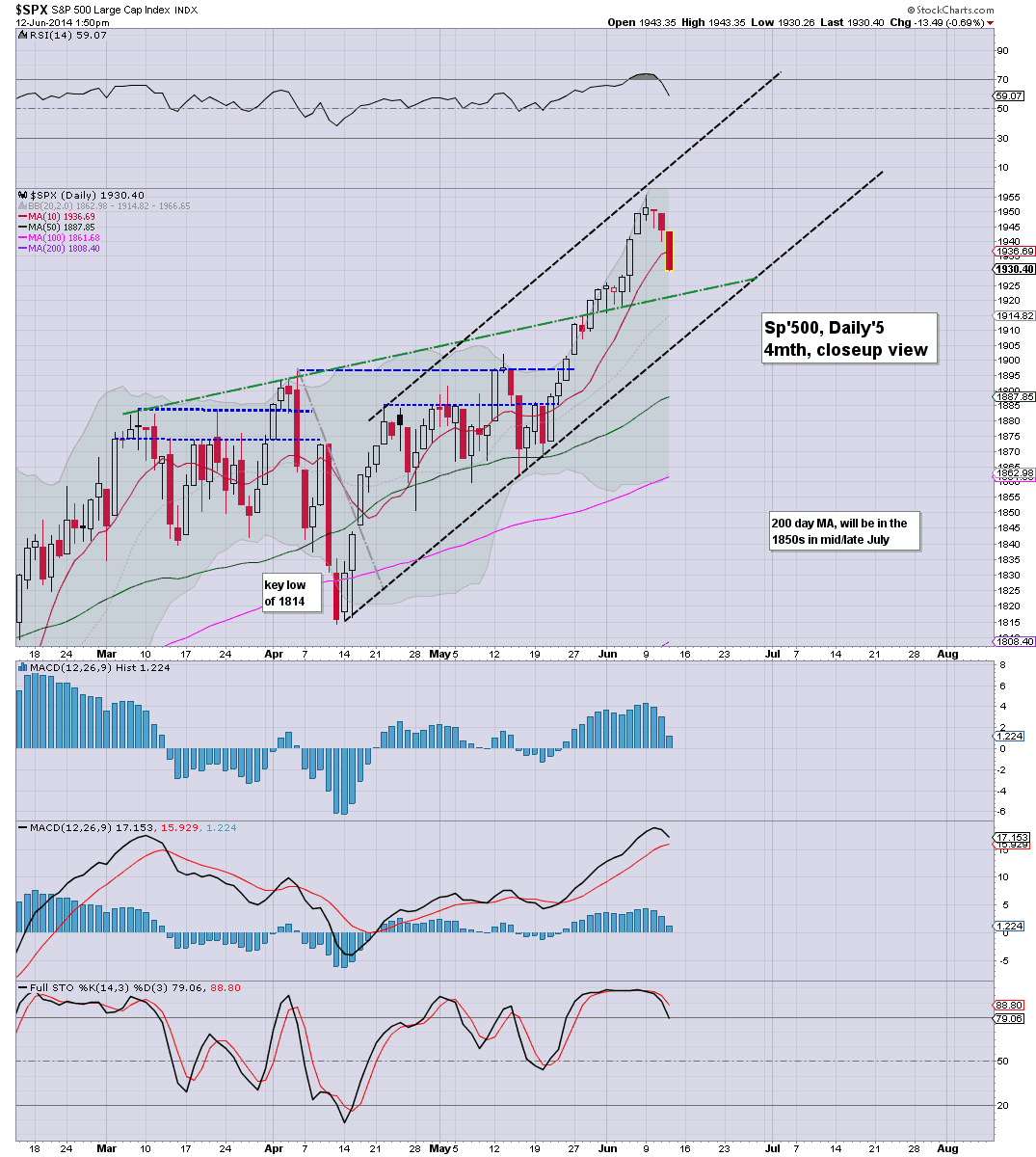 Well, for those who were calling for a pre-opex low for Thurs/Friday, it seems they were certainly right.
-

I'm certainly still seeking higher levels.. but clearly, market is not in the mood to rally today.
-

*I am LONG, via WFM, CHK, and an index block. I will hold overnight, and look to exit into the Friday close..although with sig' QE on Monday, I could just about stomach holding across the weekend.


2.40pm. A little gap has been filled on the VIX... would make for a natural mini top..into next week.
Posted by Trading Sunset at 18:53:00
Email ThisBlogThis!Share to TwitterShare to FacebookShare to Pinterest

1pm update - battling into the afternoon

US indexes remain moderately weak - although Trans' remains significantly lower by -1.5%. Oil is holding strong gains of 1.5%, and looks set to climb for some days to come. Metals are arguably catching a fear bid. Gold +$11. 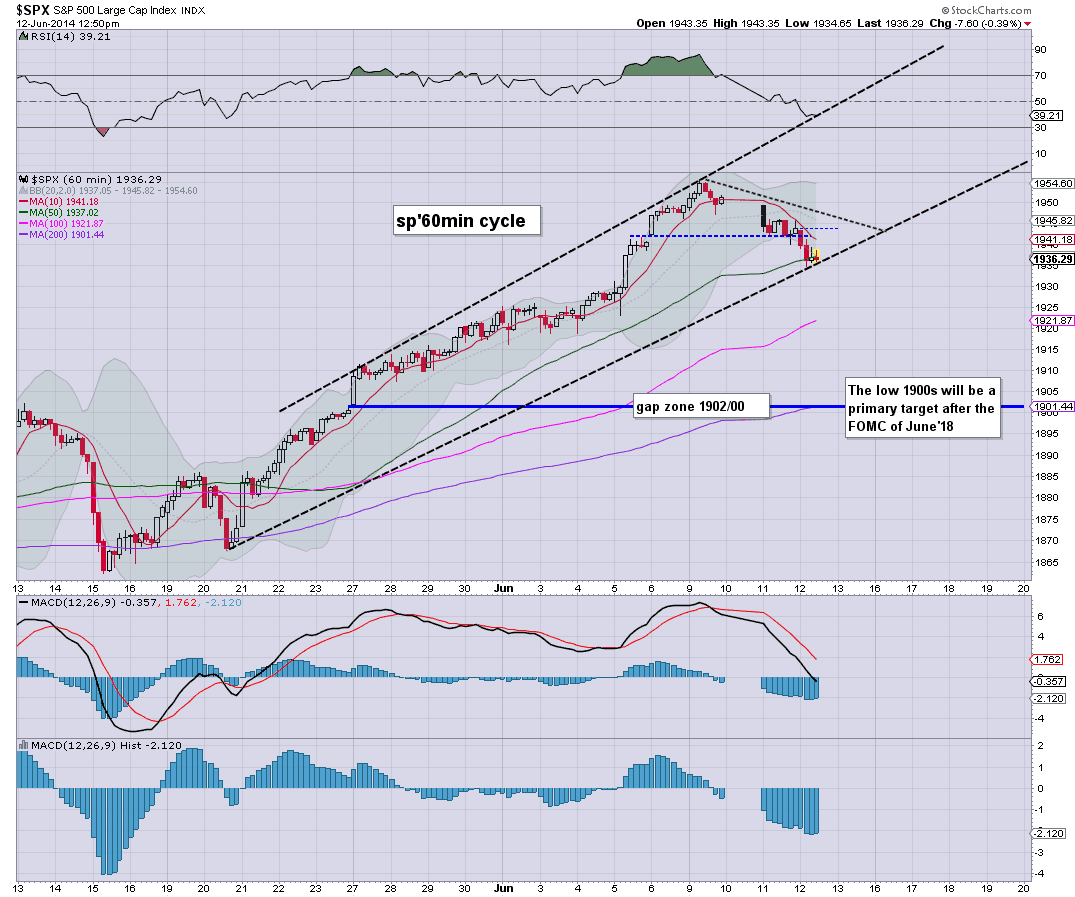 *I now have my eyes on CHK - I did a post on it yesterday, but I don't actually have a position in it yet.

Regardless of whether I pick that up, I'll hold LONG, via an index, and WFM, both look fine into the Friday close.
--

So, we're still seeing some weakness, but the hourly charts look pretty floored, with general moderate upside into next week.

back at 2pm...
Posted by Trading Sunset at 17:51:00
Email ThisBlogThis!Share to TwitterShare to FacebookShare to Pinterest

US indexes look to have floored at sp'1934, and will likely gradually recover into the late afternoon. A further multi-day push higher into next week looks probable. Oil is holding strong gains of 1.4%, whilst Gold is building gains,+$10. 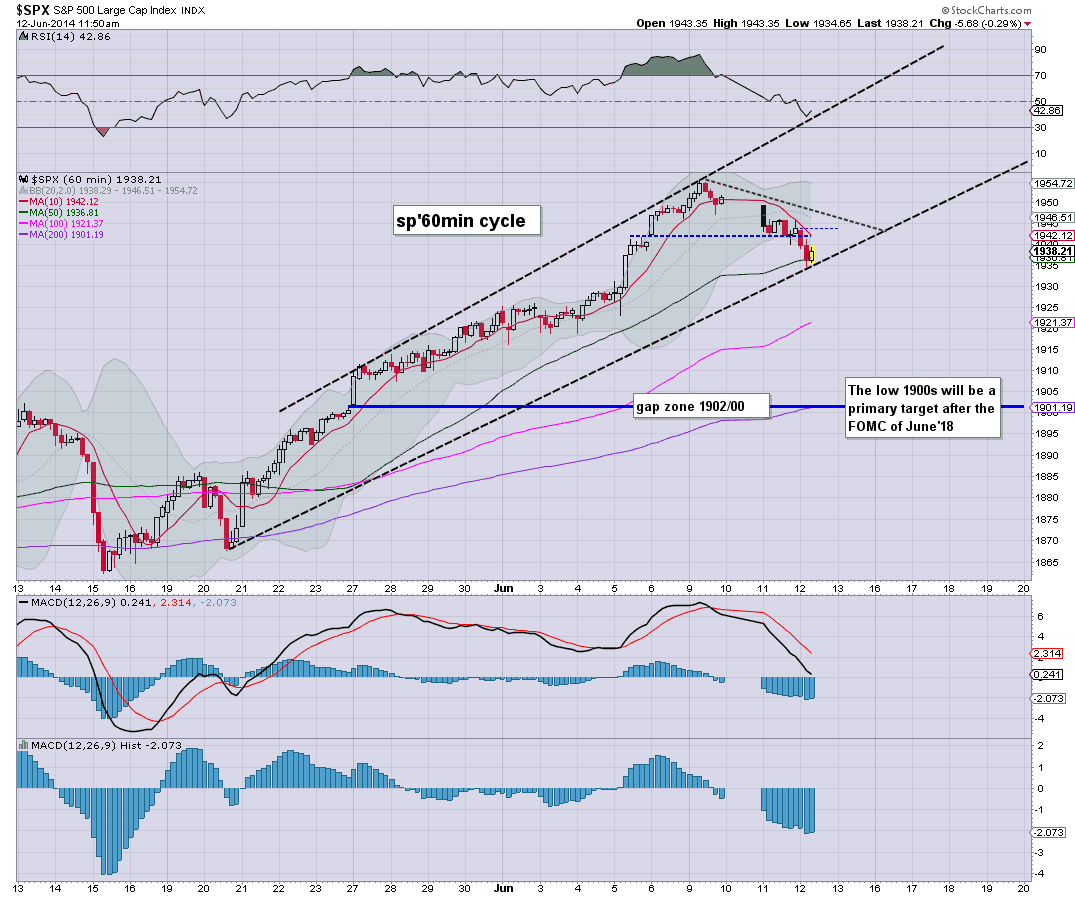 Little to add. Price action remains pretty strong, and there is little for the market to be concerned about until next Wednesday.
-

--
time for an icy drink
Posted by Trading Sunset at 16:50:00
Email ThisBlogThis!Share to TwitterShare to FacebookShare to Pinterest

11am update - time for a floor

US indexes have continued to slip, with the sp'1940 floor failing to hold. Regardless, price action remains 'relatively' muted, and the 1950/60s seem a given by the next FOMC of June'18. Oil is holding sig' gains of 1.4%, whilst Gold is higher by $11. 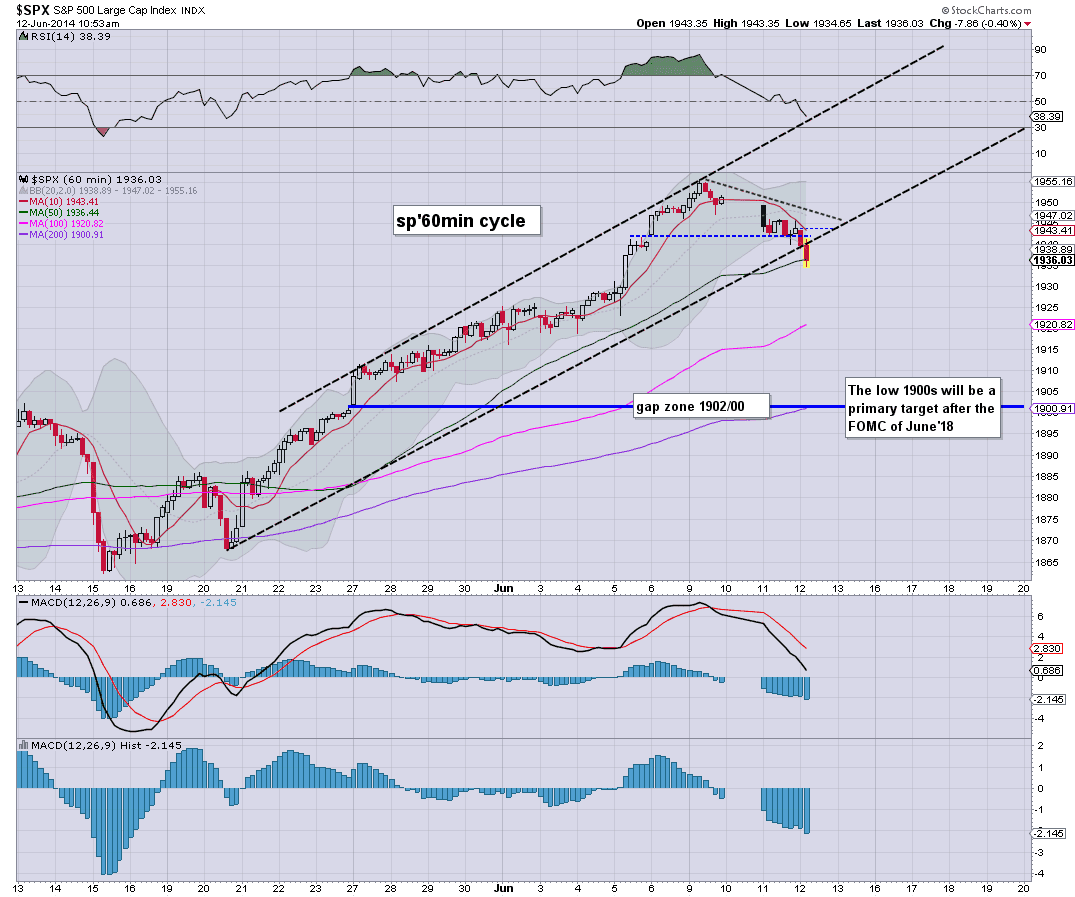 So, we're lower, but this price action has no real power to it, and I'm still looking for a renewed push higher.

On that basis, I've even decided to pick up an index long, but will seek to drop that.. along with WFM into the Friday close.
-

Equity bulls should be seeking a daily close in the 1945/50 zone... I'd be surprised if we see above that today...

Equities open a touch weak, with a fractional break of yesterdays lows. Price action still favours the bulls, and market will likely see minor chop across the rest of today, but with a net daily gain for some  indexes. Oil is strongly higher, +1.6%, whilst Gold is +$5 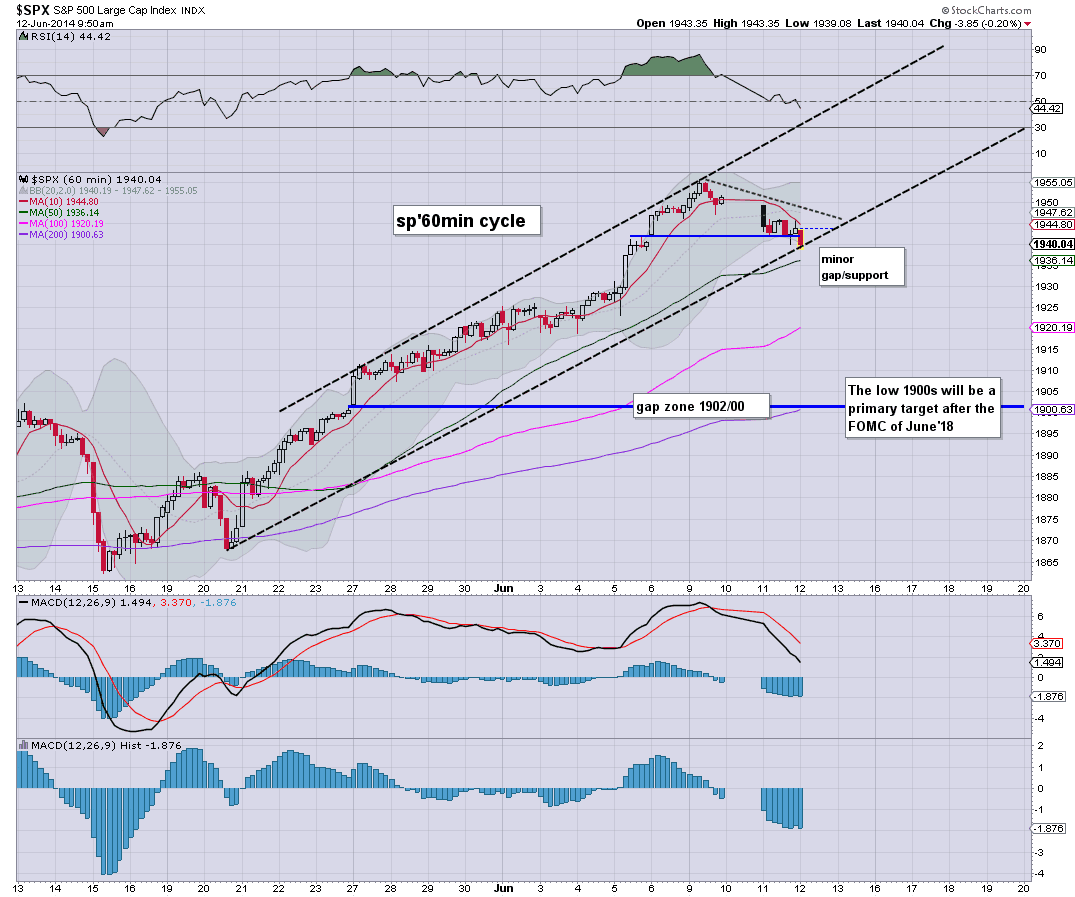 *I'd like to highlight the Trans..which really needs to hold the current level..and push higher. R2K is looking a little ugly too on the daily chart..but nothing critical...yet. 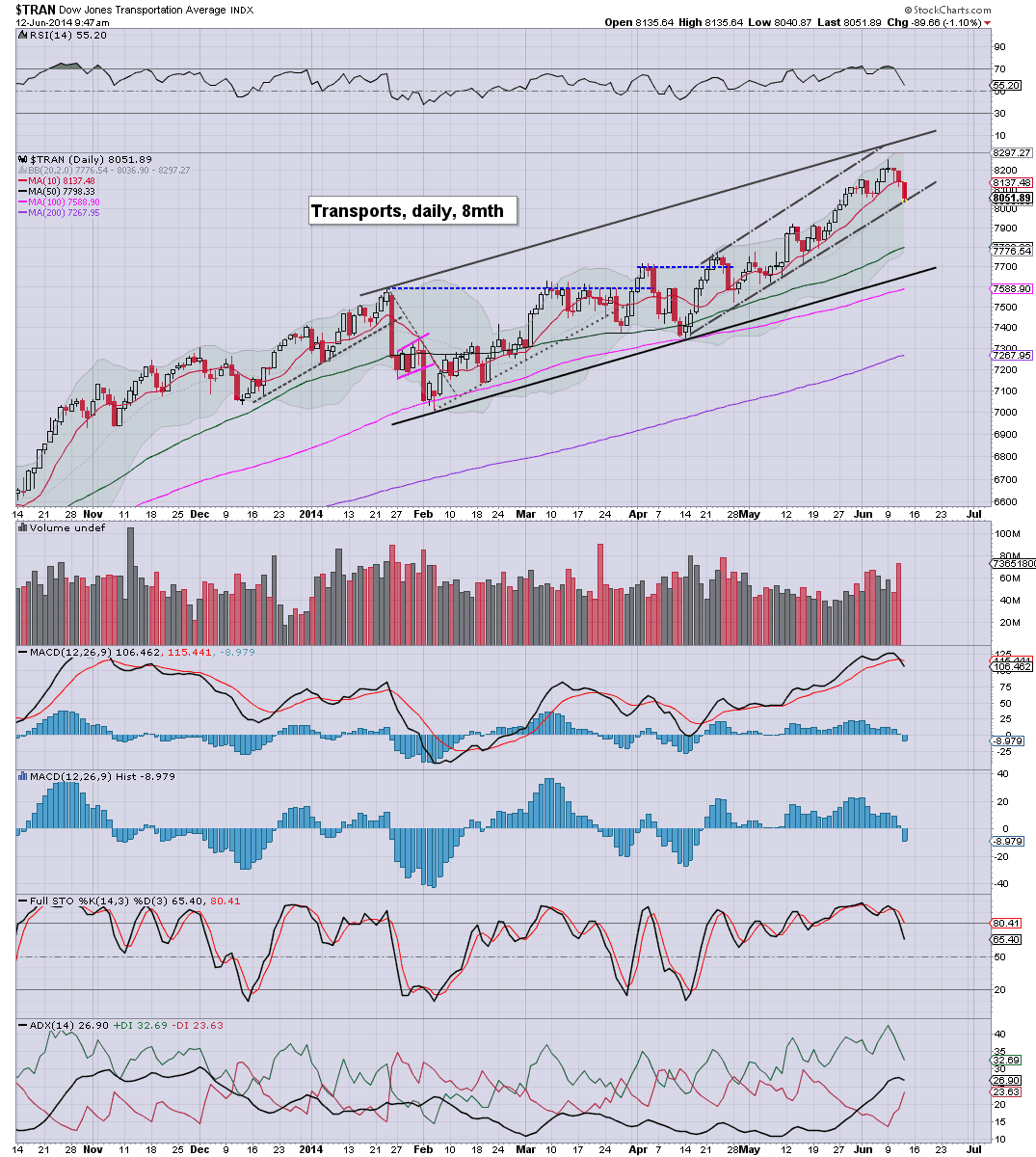 *WFM is already sporting moderate gains...although the 44s sure look a tough challenge by the Friday close. I am trying to be... patient.
-

Market highly likely to reverse from here. ..bears getting a chance to exit at 1940.

Good morning. Futures are a touch higher, sp +1pt, we're set to open at 1944. Metals are moderately higher, Gold +$3. The real action is in Oil, +1.8%, no doubt due to Iraqi concerns. Equities look set for a renewed push higher, but with lighter volume. 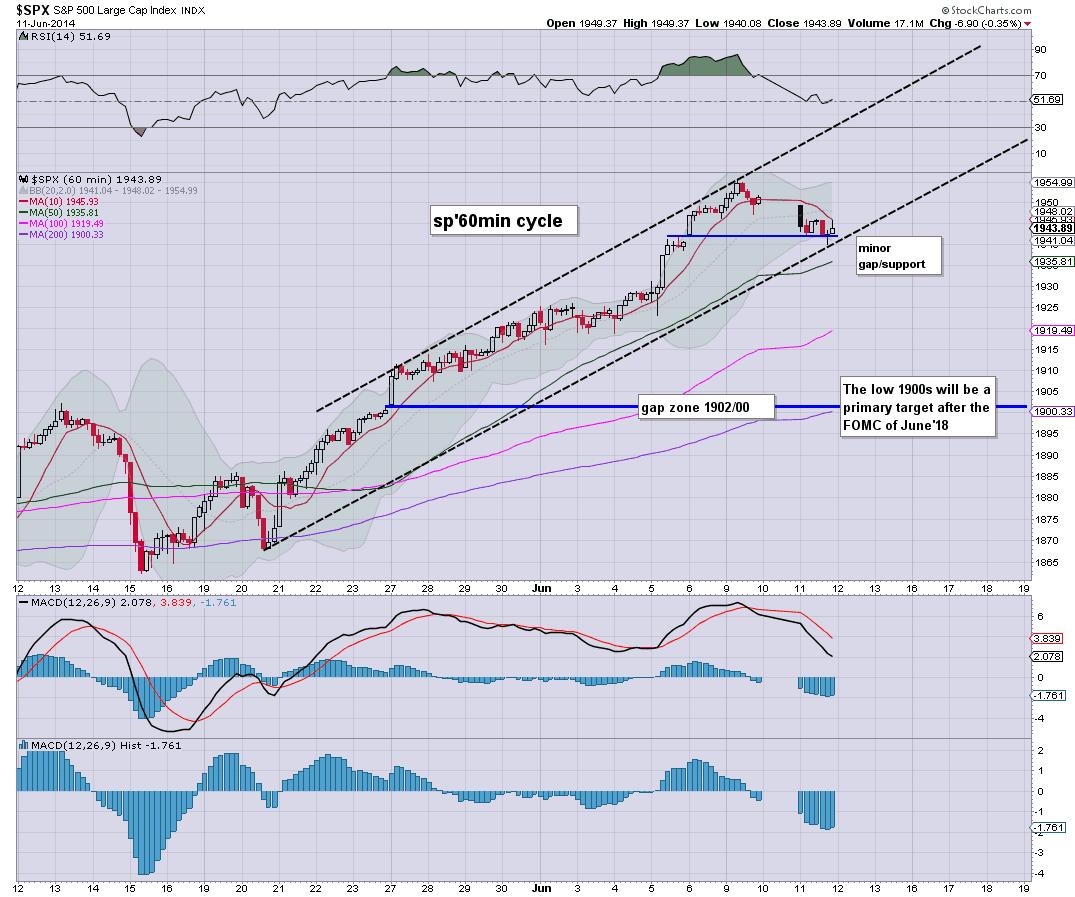 Well, it is day 1 of the World cup, and many will be turning their attention away from the markets later today (pre show starts shortly after 2pm EST.
--

We do have some econ-data across the next few hours, so... market should start to move from here.
--

Oil is roughly $106, and the $110 level remains a major threshold. A weekly/monthly close >$110 would be significant, and bode for some

Regardless, there is no significant downside pressure, and that will surely remain the case until at least next Wednesday afternoon.

Posted by Trading Sunset at 13:23:00
Email ThisBlogThis!Share to TwitterShare to FacebookShare to Pinterest

The World Cup begins tomorrow in Brazil, and for many investors, it will be a welcome diversion from the daily nonsense of the equity markets. It appears very likely that trading volume will be even lower as a result of the forth coming 64 matches, and a quieter market will favour the bulls. 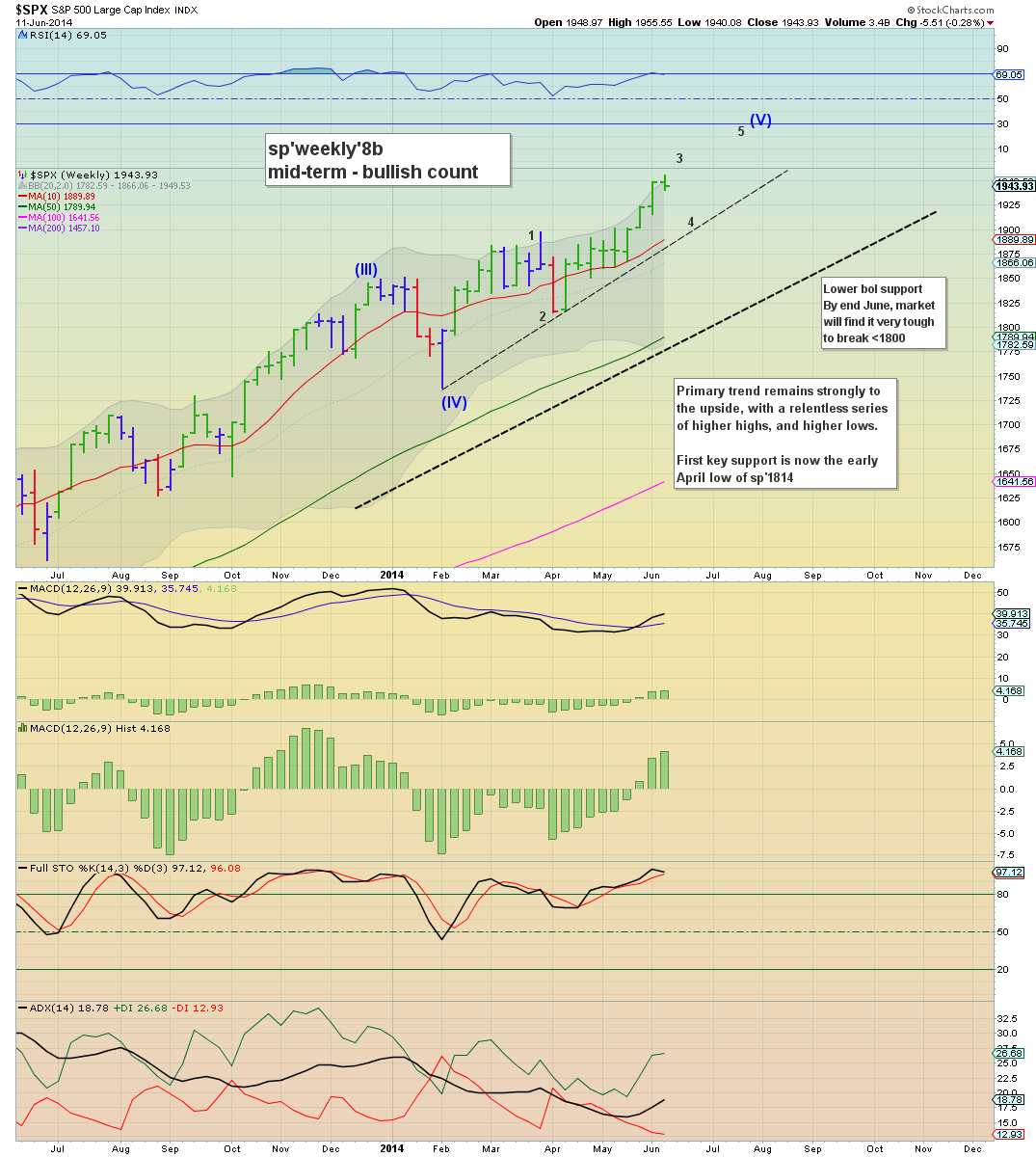 *the count remains a 'best guess', and right now, I'd guess we might see a small decline post FOMC, only to then rally into early/mid July.
--

So yes, with the World cup football (or Soccer, as you might call it), I don't expect much from the US..or any other world market until mid July.

Sure, we could easily see a brief fall back to the low sp'1900s - where there are a number of aspects of support, but I sure don't expect 1800s again until late July/early August.

We have an array of data tomorrow, jobless claims, import/export prices, bus' invent', and retail sales. Those should be enough to give the market a kick higher..if they are within expectations.


Ready for some games

I'm not a particular fan of what is the UK's national sport - Football, but the international games are something else entirely. First game is tomorrow at 4pm EST, although the TV coverage begins around 2pm...so I'd expect many to forget about trading the market by early Thursday afternoon.

The fact the world cup lasts an entire month should lead some to realise that things will be rather quiet for the next 4-5 weeks - which of course, will also encompass the US July'4 holiday weekend.

*I hold moderately long, via WFM, and that managed to close positive today, which was something of a bonus, considering the early morning decline. I'd sure like the 44s by late Friday, but that is a clear 5% higher.

Thanks for the comments across the day, its good to hear from YOU!

US indexes saw moderate weakness across much of the day, sp -6pts @ 1943. The two leaders -Trans/R2K, settled lower by -0.8% and -0.5% respectively. Near term outlook is for renewed upside into the FOMC of June'18. 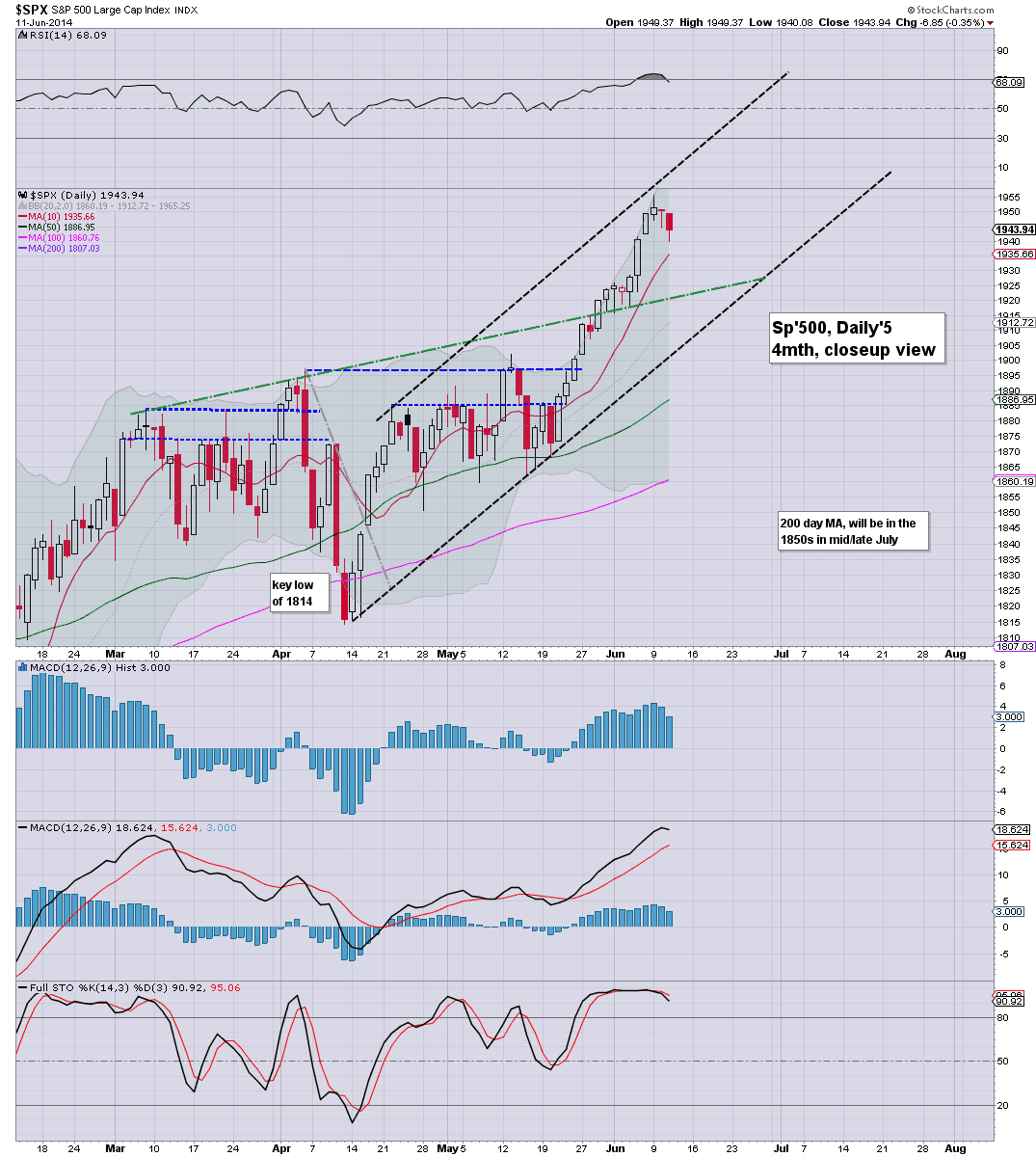 Yes, the MACD (blue bar histogram) cycles are rolling over on most indexes, but there is nothing too decisive yet, and I'm guessing we'll see one further multi-day wave higher...taking us into the FOMC of next Wednesday.

I certainly have zero interest in being short the indexes until at least next Wed' afternoon, and even then, downside might be limited to just 2-3%.
--