US indexes continue their broad and extremely powerful rally from the Oct'2011 low of sp'1074. All indexes are already higher this month by at least 1.2%, with the R2K leading the way with a gain of 2.7%. Further upside into the next FOMC of June'18 looks likely. 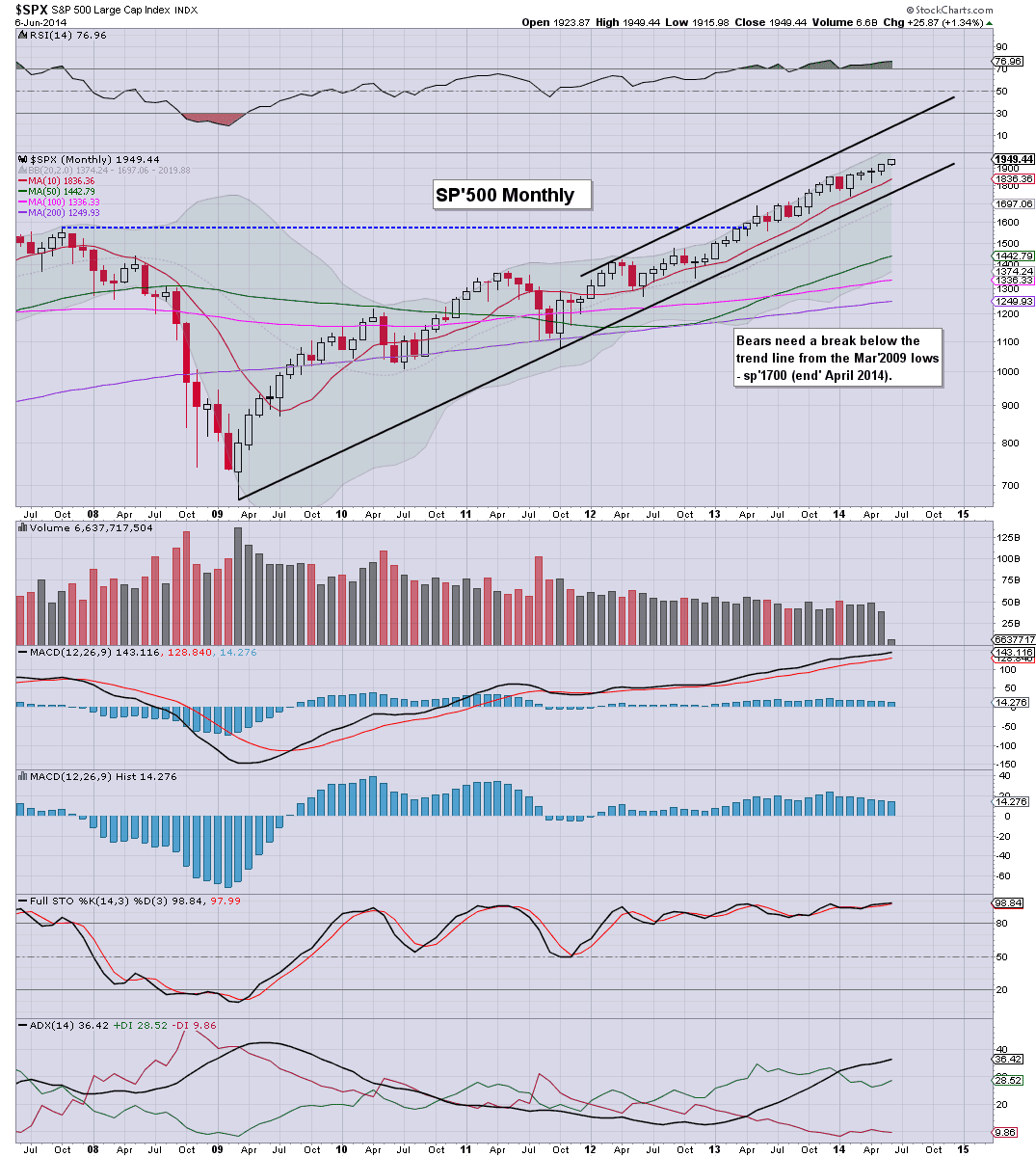 The 10MA is primary rising support, now in the 1830s. Trend support is currently around 1750, a rather sizable 200pts to the downside. Underlying MACD (blue bar histogram) cycle continues to slip, but there is nothing remotely bearish in overall price action. 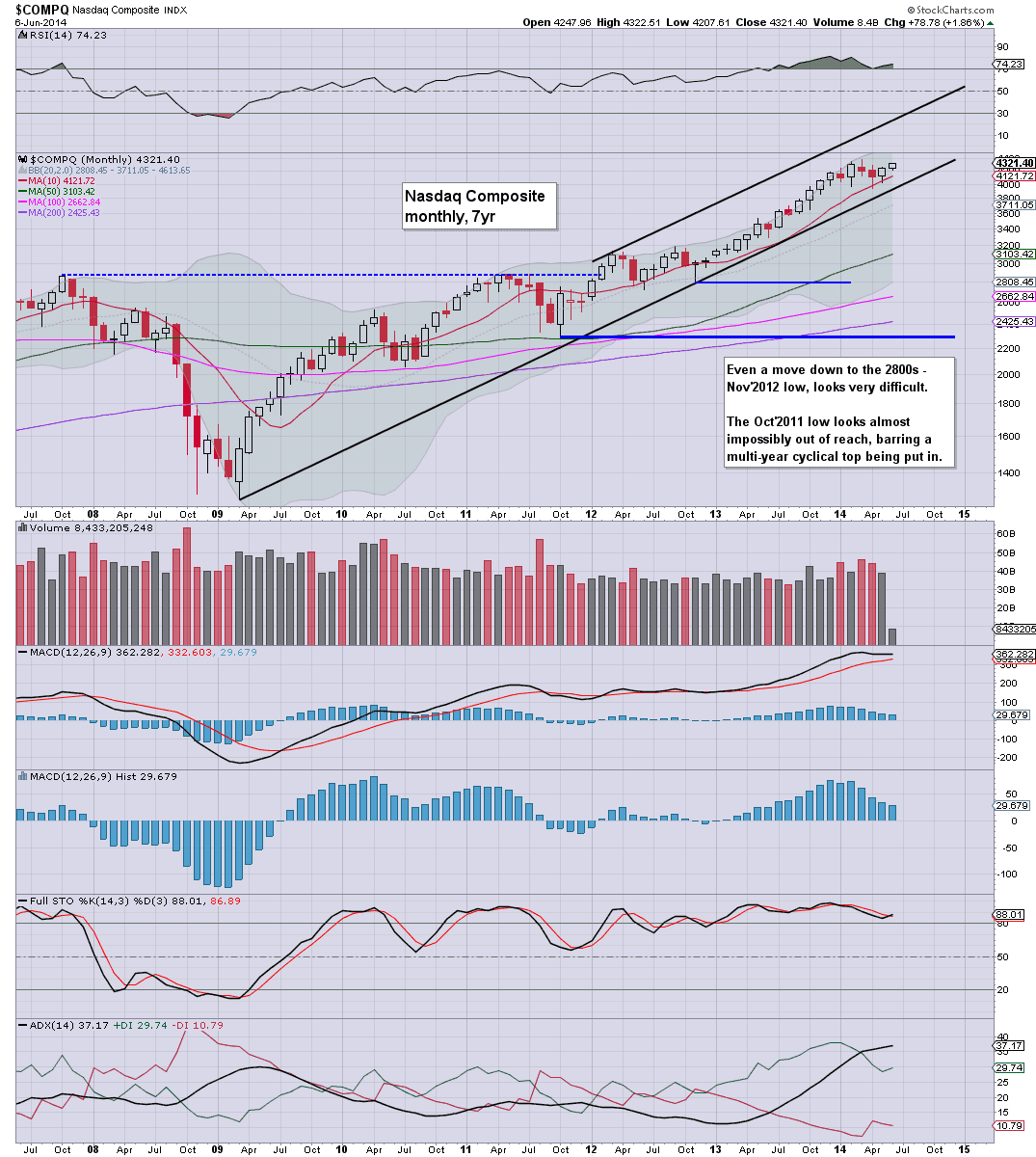 The Nasdaq comp' is battling back - just like the R2K, and is just 1% below the March high. Considering the broader market, the March high does look set to be broken. Upper bol' is offering the 4500/600s in the near term. 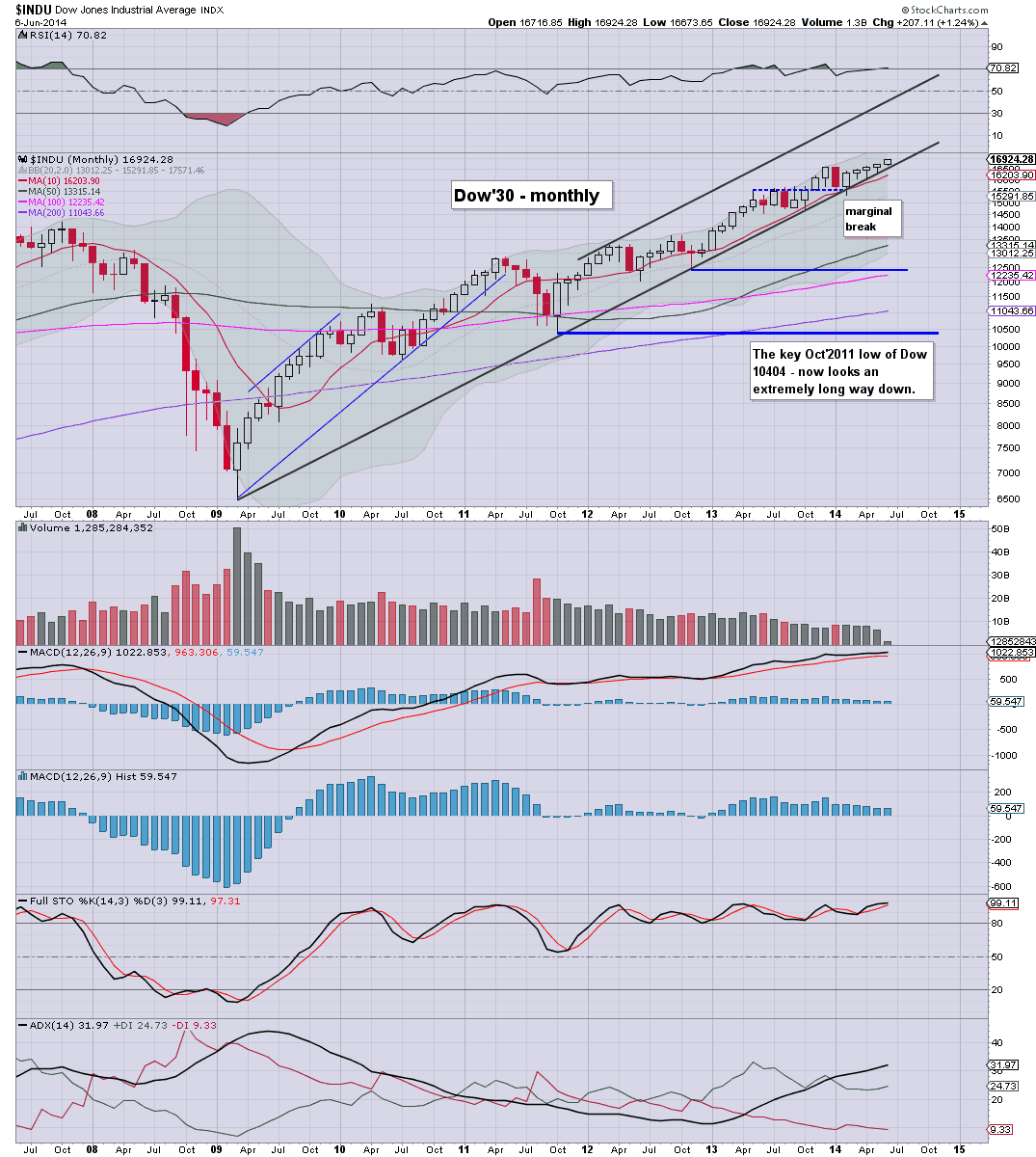 The mighty Dow has been one of the weaker indexes - with fractional breaks of the broader up trend, but is already 207pts higher this month. First key support is the 10MA, now in the 16200s.

Equity bears need a break back under 16k to get somewhat interested in a possible multi-month fall this summer/early autumn. As it is, upper bol' is offering 17500s in the immediate term, although the weekly charts will be restrictive of that until at least July..if not August. 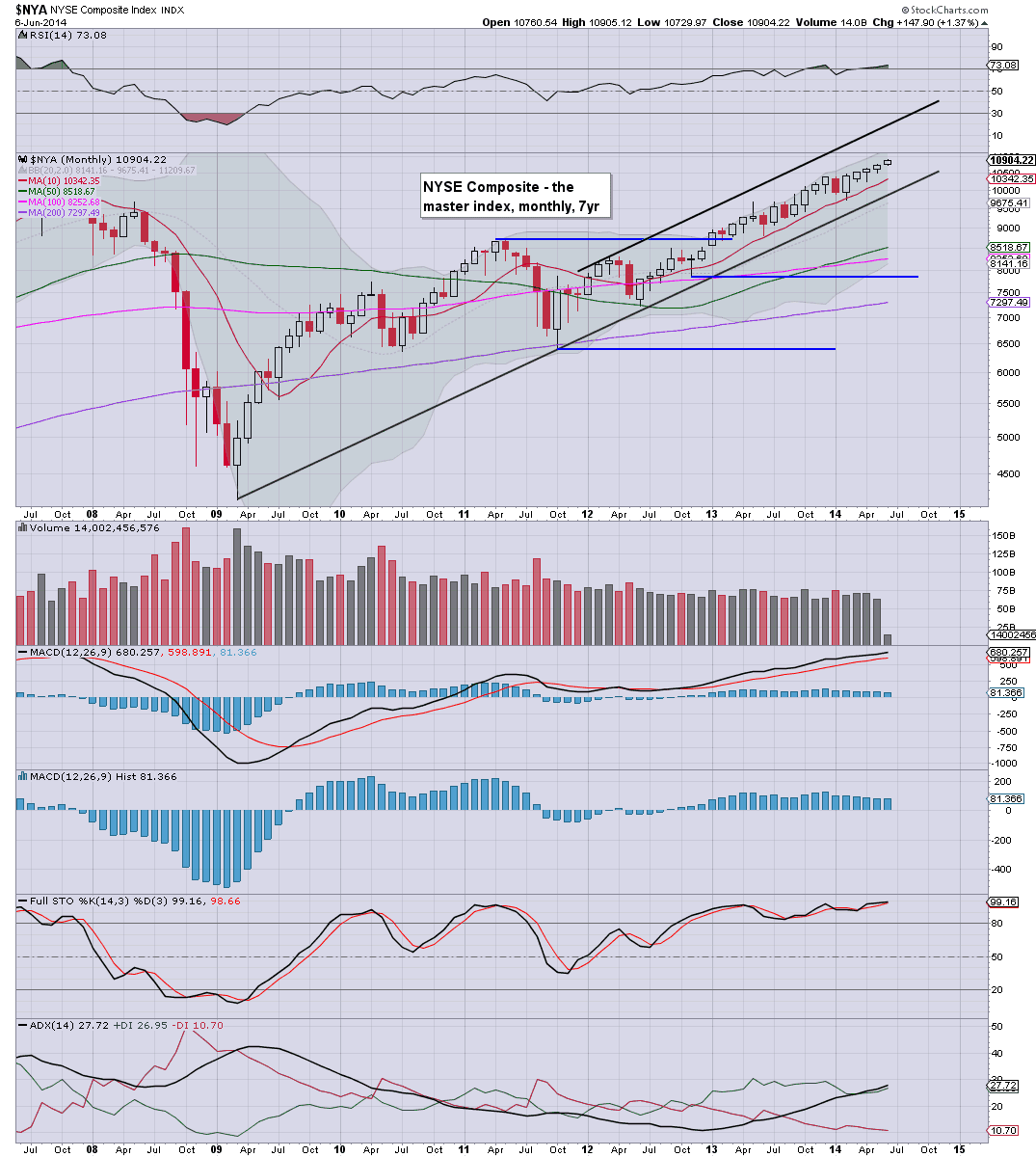 The master index continues to push higher, and to my own surprise, looks set for the 11000s within the near term. There is nothing bearish here. 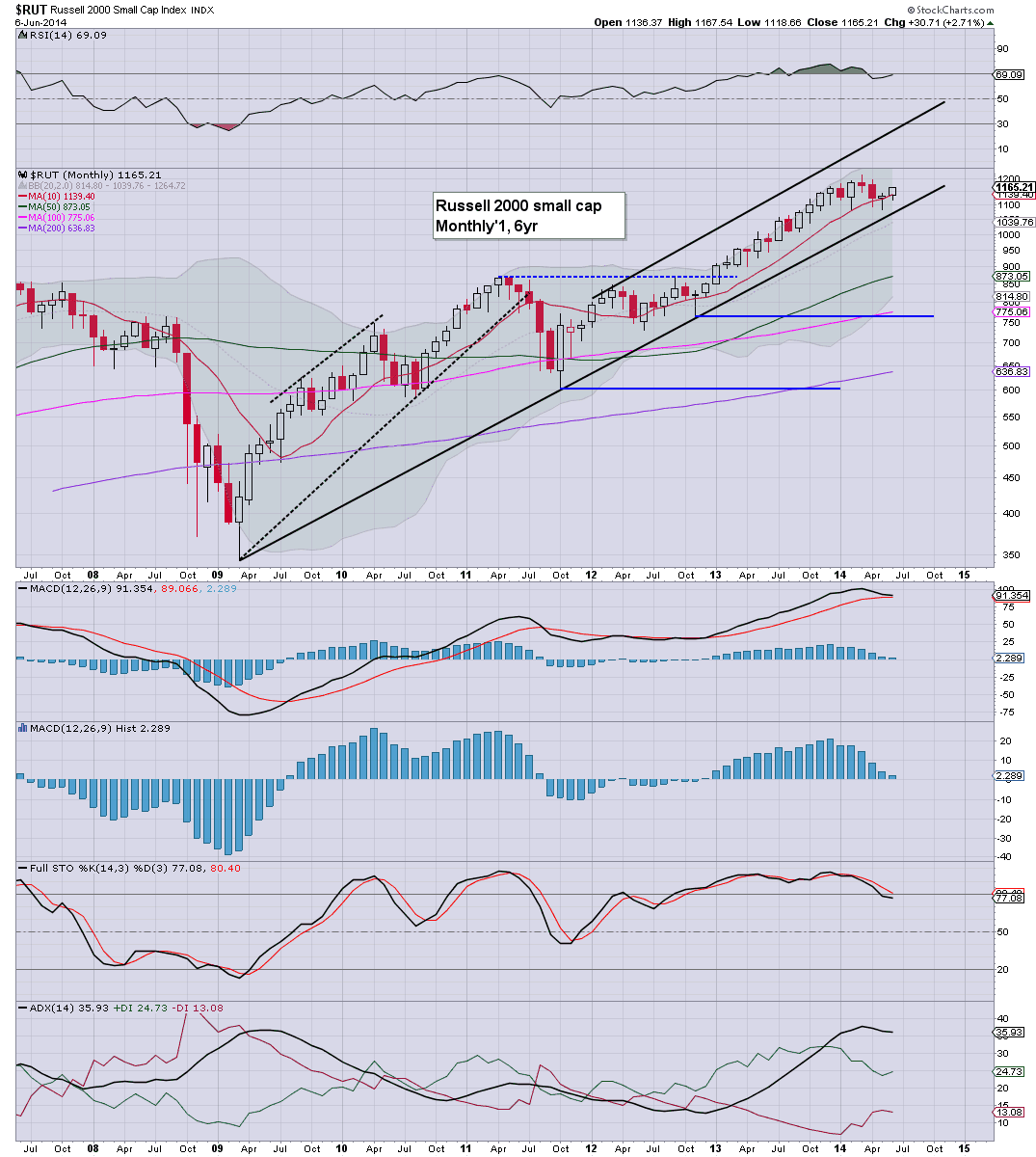 The R2K is battling to push away from the danger zone of the 1080s. The big 1200 level is a must for equity bulls this June, or a possible large H/S formation might indeed be the case. Underlying MACD cycle remains marginally positive, but is vulnerable to turn negative in the near term..certainly on any break back under 1100. 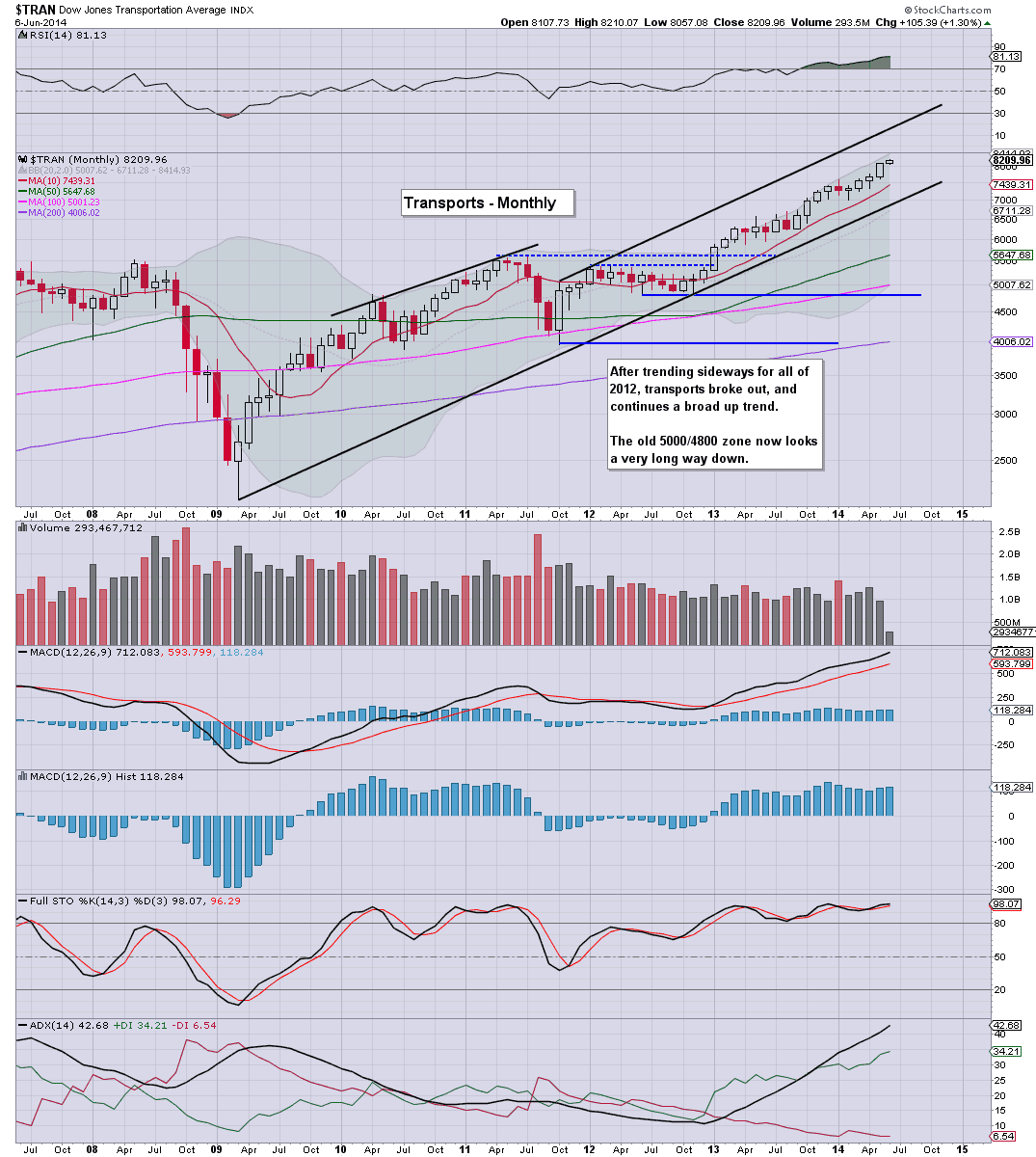 The 'old leader' - Transports, continues to break new historic highs, almost day after day. The tranny is now in the 8200s, and the 8400/500s look viable by late June/early July.

So..we're started month'33 of the giant wave from Oct'2011, with a pretty strong week. Without question, there is ZERO sign of the current rally ending.

To my own continuing horror, the 'crazy bullish' outlook from almost a year ago is about reached... 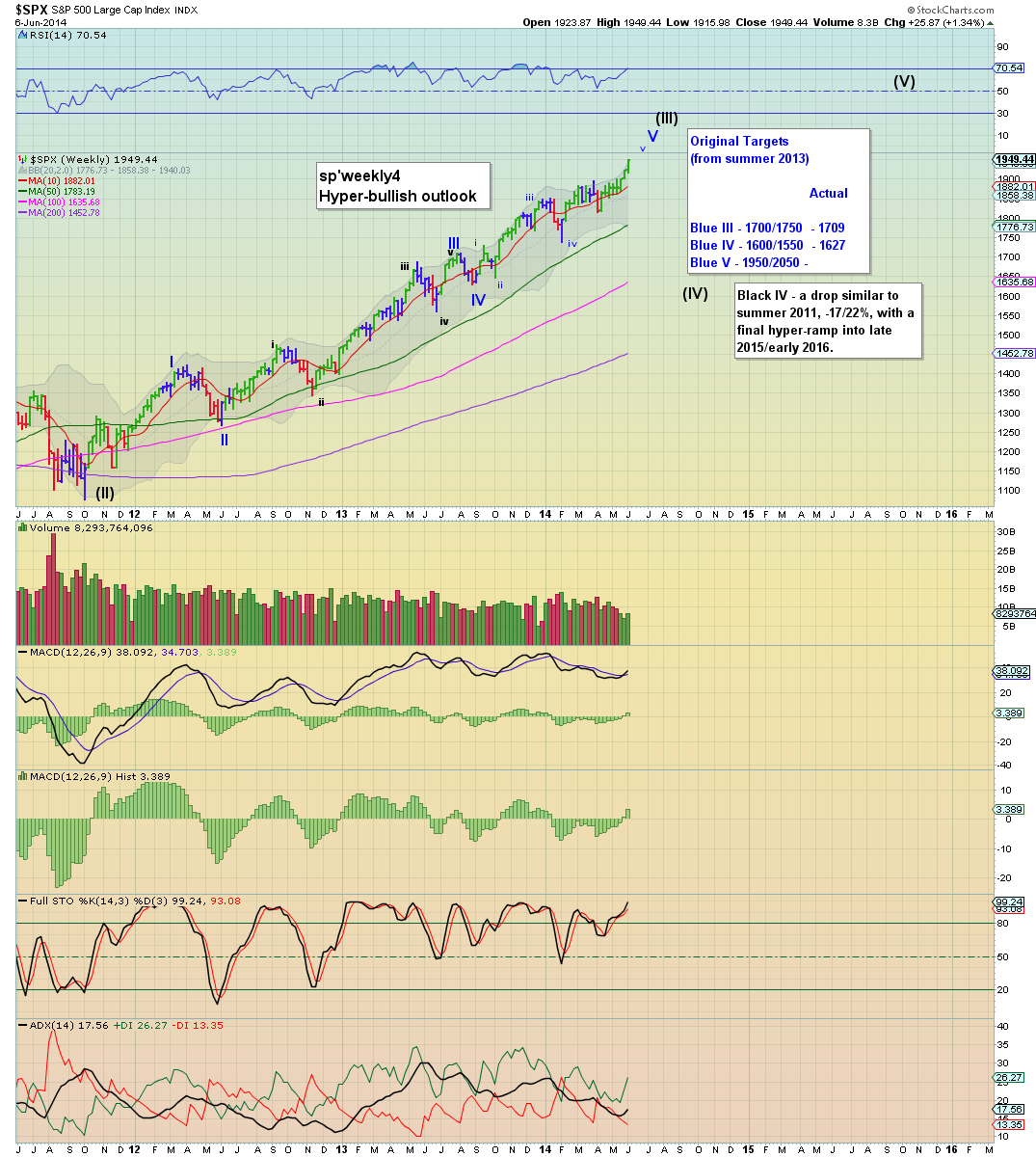 Equity bears should be waiting for 2 or 3 blue candles before getting overly hopeful of any significant downside. As ever, primary downside in the first multi-week down wave would be the lower weekly bollinger, and that is currently flat lining in the 1770s, but will start to soon rise.

So, even if the market (for whatever reason) starts to cycle lower after the next FOMC, there will be huge support in the 1850/25 zone across July.

Next week is almost entirely devoid of scheduled data/events. The only notable aspects are retail sales and jobless claims, both due Thursday.

There are two fed officials on the loose on Monday. As ever, any comments could be an excuse for Mr Market to move.

The question remains, are the equity bears going to see a multi-month down wave this year? Even a decline of just 2-3 months would be 'something', right? The original target zone of 1625/1575 now looks such a long way down, is that kind of fall still possible this summer/early autumn?

As ever, I am trying to be extra careful, and generally just biding my time before this market does break. I want to be there, with available capital to short this nonsense. I don't have much inclination to attempt any index shorts until the next FOMC. If we can get a few blue candles on the weekly 'rainbow' charts, then perhaps... the long awaited correction will have finally begun.

Equity bulls remain in full control. Even the somewhat battered R2K is pushing upward, with an impressive net weekly gain of 2.7%. With new historic highs in the Trans, Dow, and sp'500, the equity bears have zero sign of this up trend ending in the immediate term. 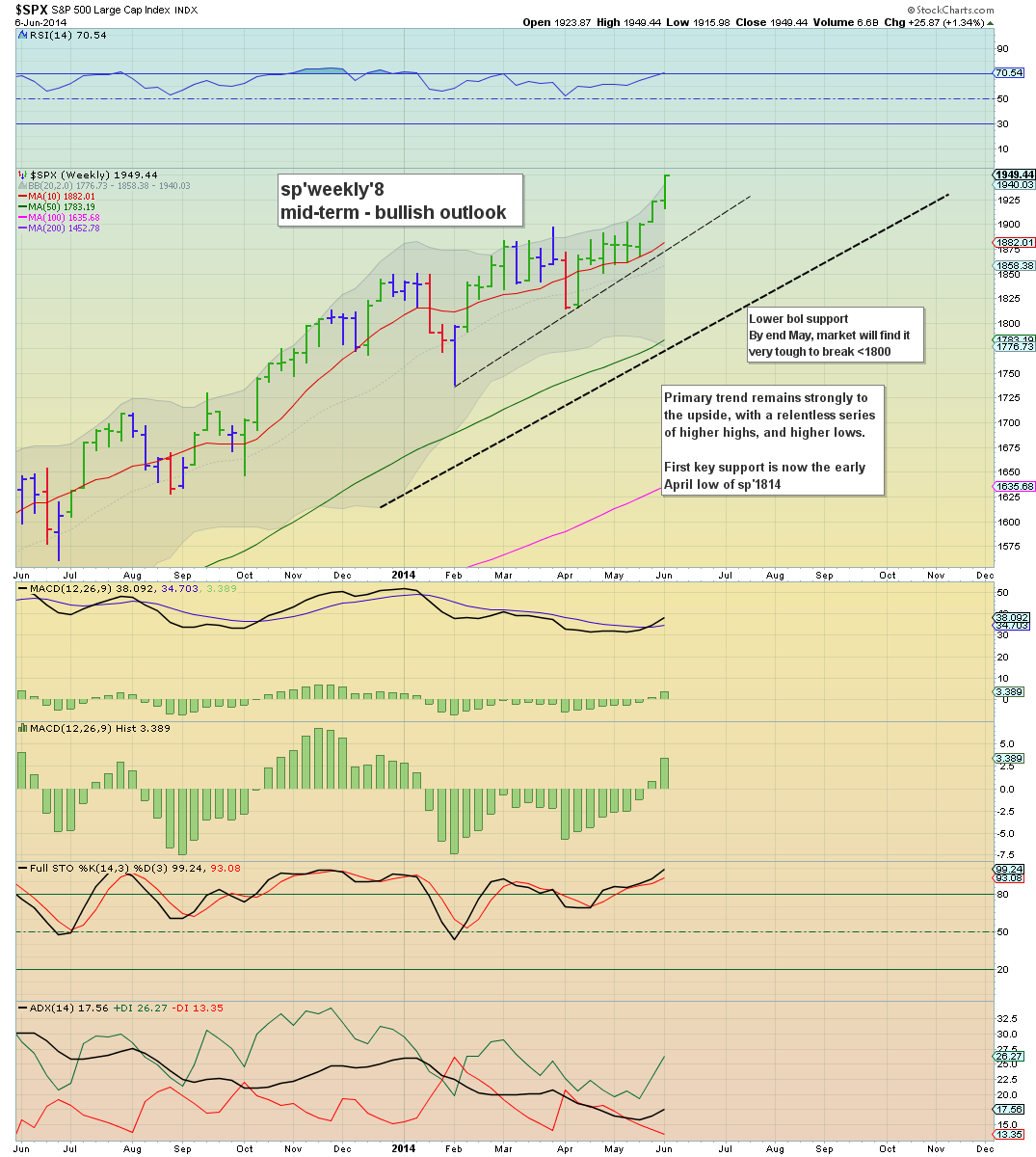 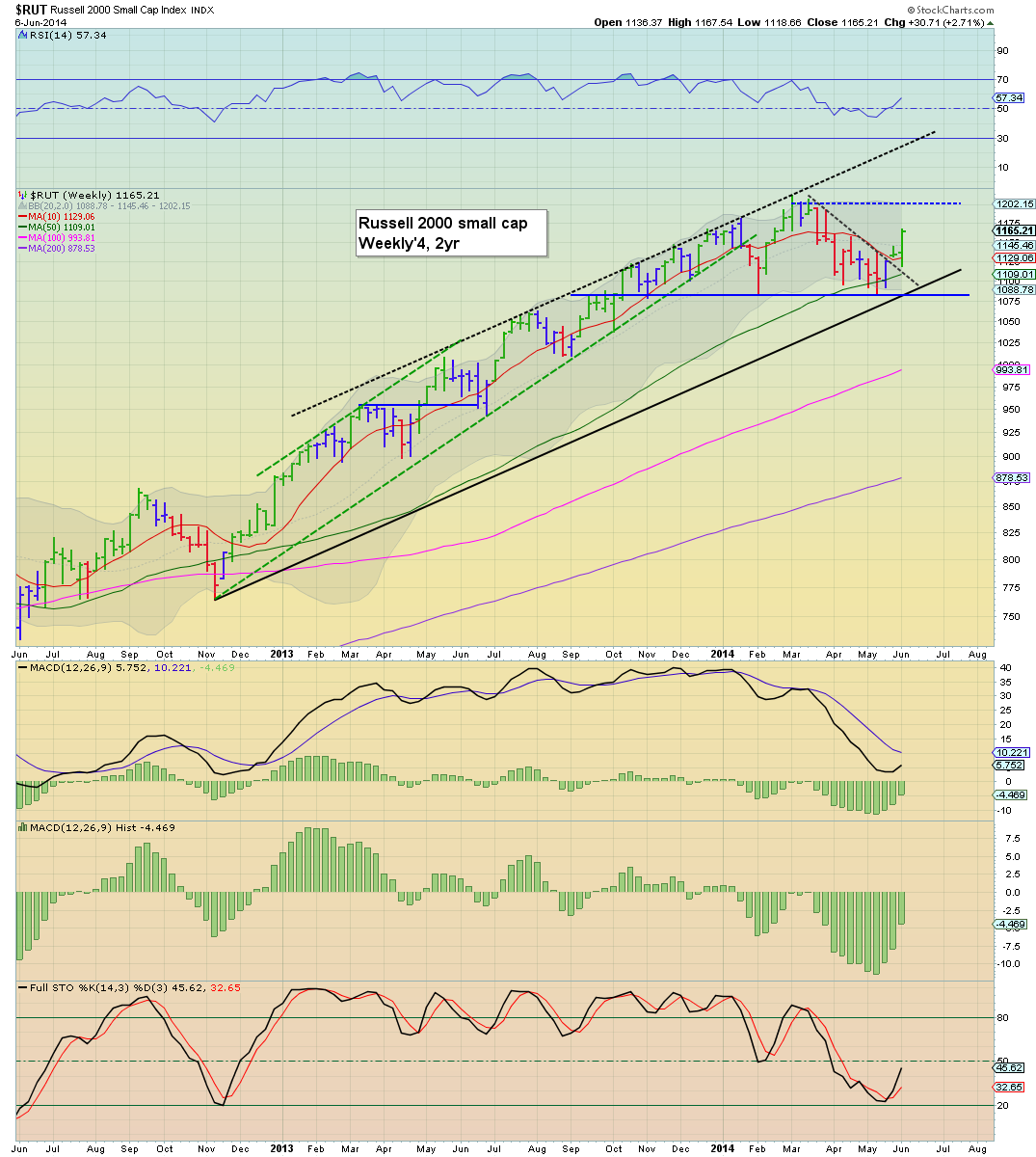 Suffice to say, another trading week concludes, and we have powerful new historic highs on 3 indexes (4 if you count the NYSE Comp'), with the R2K/Nasdaq also pushing strongly upward.

What happens at the next FOMC of June'18 will be important.

I've little doubt - as will the main market also believe, that the Fed will announce QE taper'5. What the market does then..., that is the issue.

Will the market just keep on pushing higher - with new historic highs in the R2K, or will we see another rollover? Considering the recent price action, and utter lack of downside power, I'm somewhat resigned to further new highs.

*the weekend update will be on the US monthly indexes
Posted by Trading Sunset at 04:00:00
Email ThisBlogThis!Share to TwitterShare to FacebookShare to Pinterest

US equities closed higher for a third consecutive day, sp +8pts @ 1949. The two leaders - Trans/R2K, settled higher by 0.9% and 1.0% respectively. Near term outlook remains bullish, with minor opportunity for a retrace. 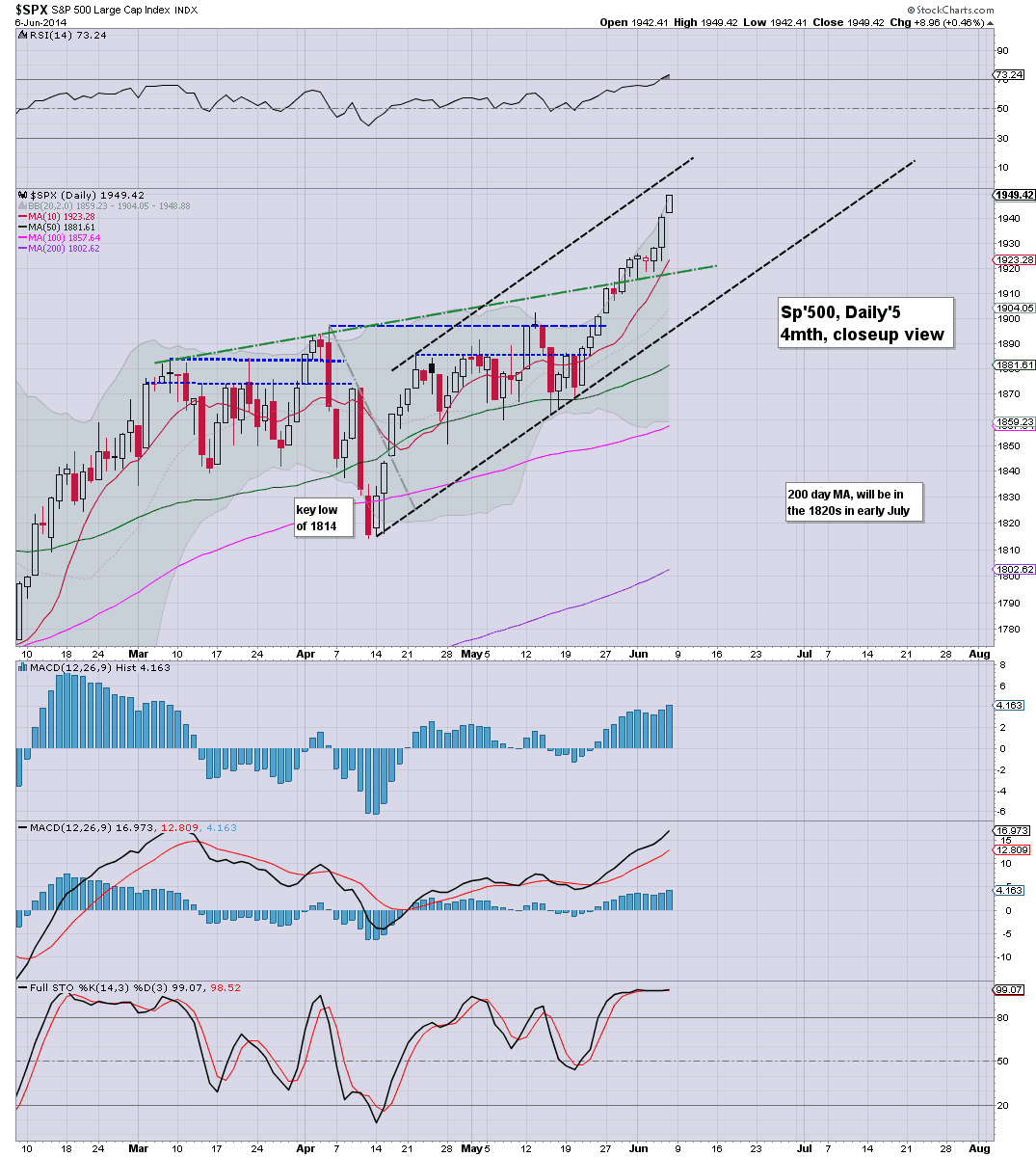 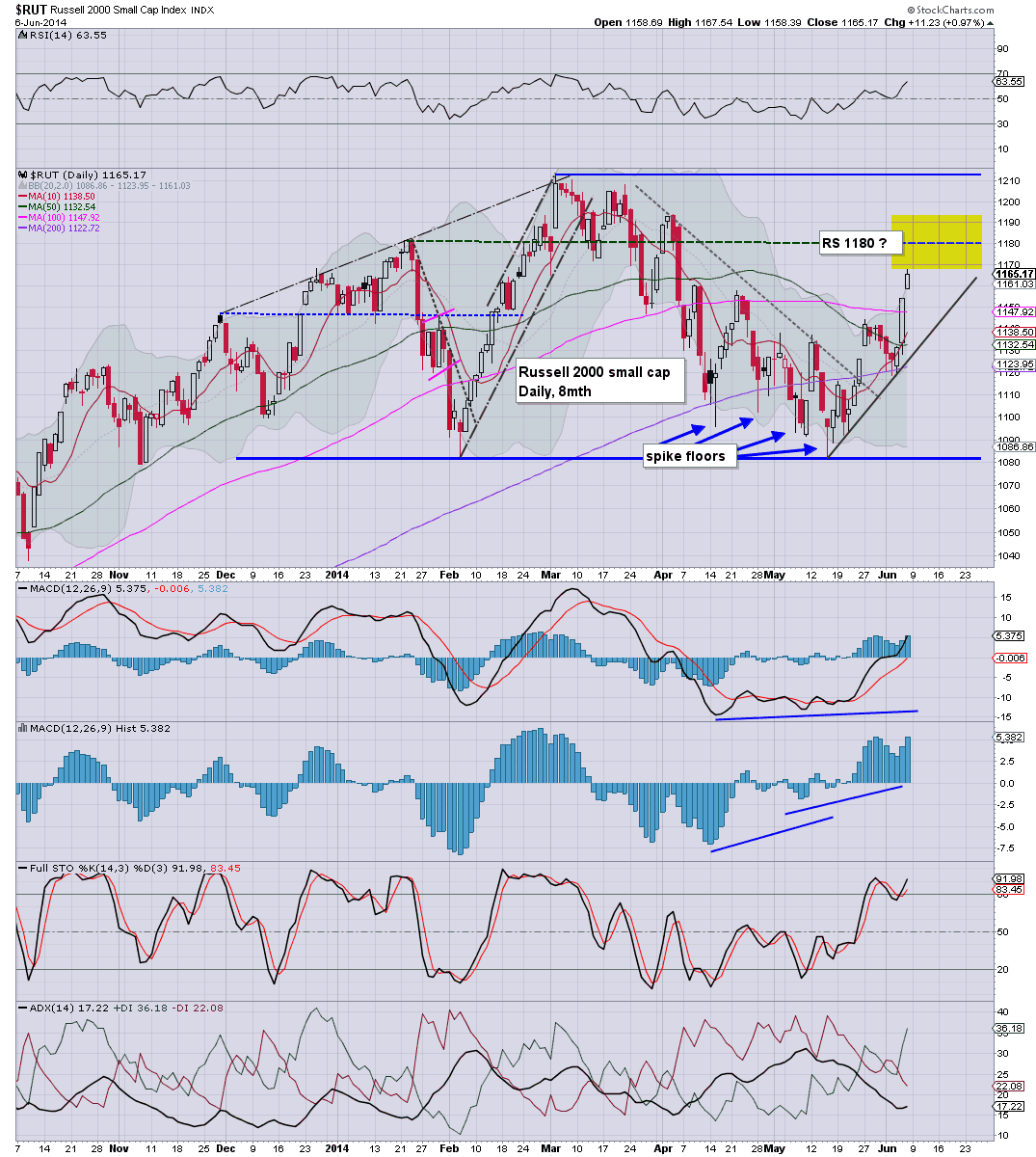 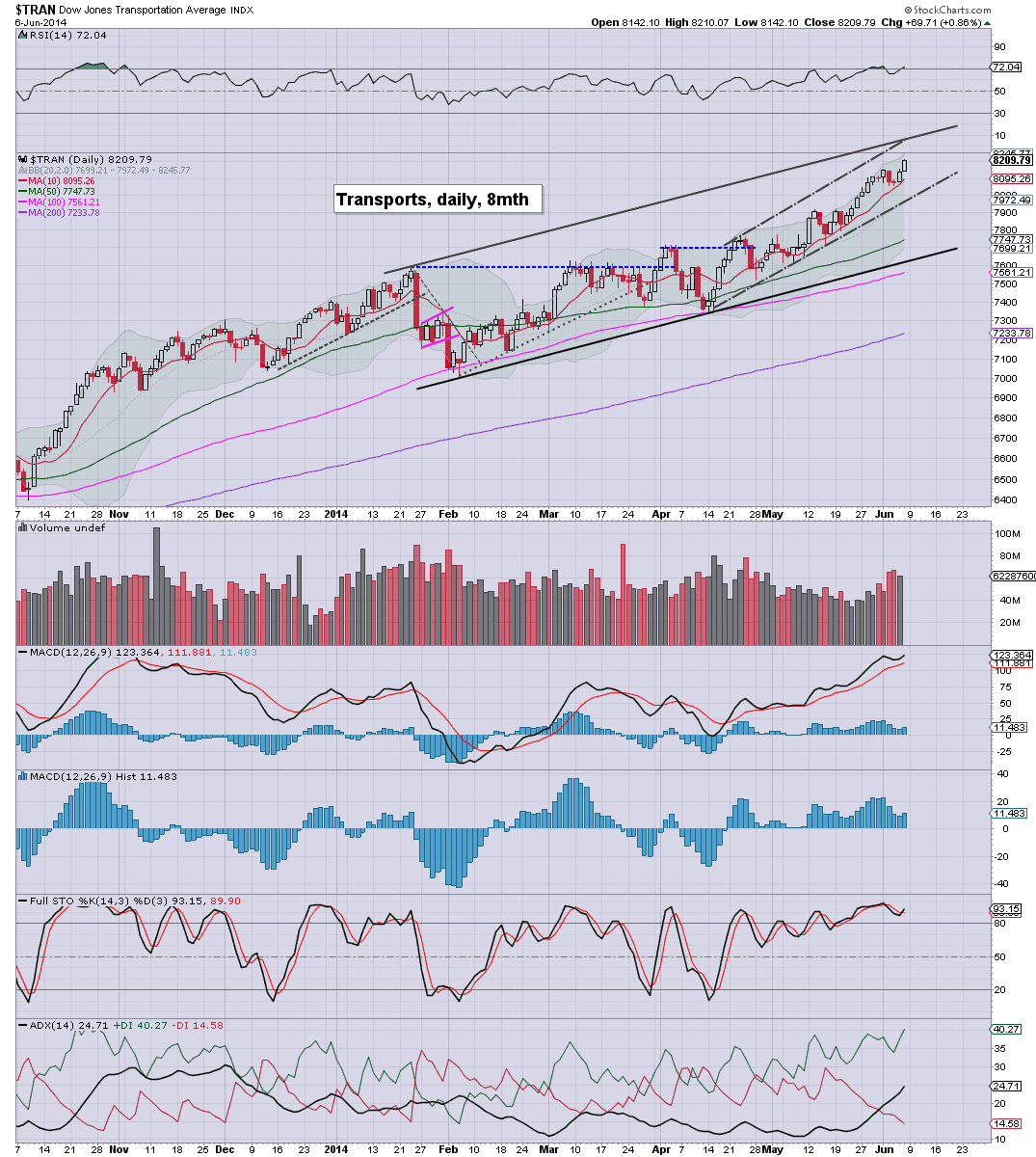 Suffice to say, primary trend remains to the upside, but yes...we should be getting stuck kinda soon - not least if you consider the Trans/R2K charts.

Regardless, I have little interest in playing the short side in the immediate term, perhaps at the next FOMC of June'18.
--