World equity markets have continued to broadly climb into spring 2014. Even the two ugly EU PIIGS - namely Spain and Italy, remain bullish, but are close to what will be strong resistance. The late spring/summer will surely see a correction, but of what size, 5-7, 10/12, or 15/20% ? 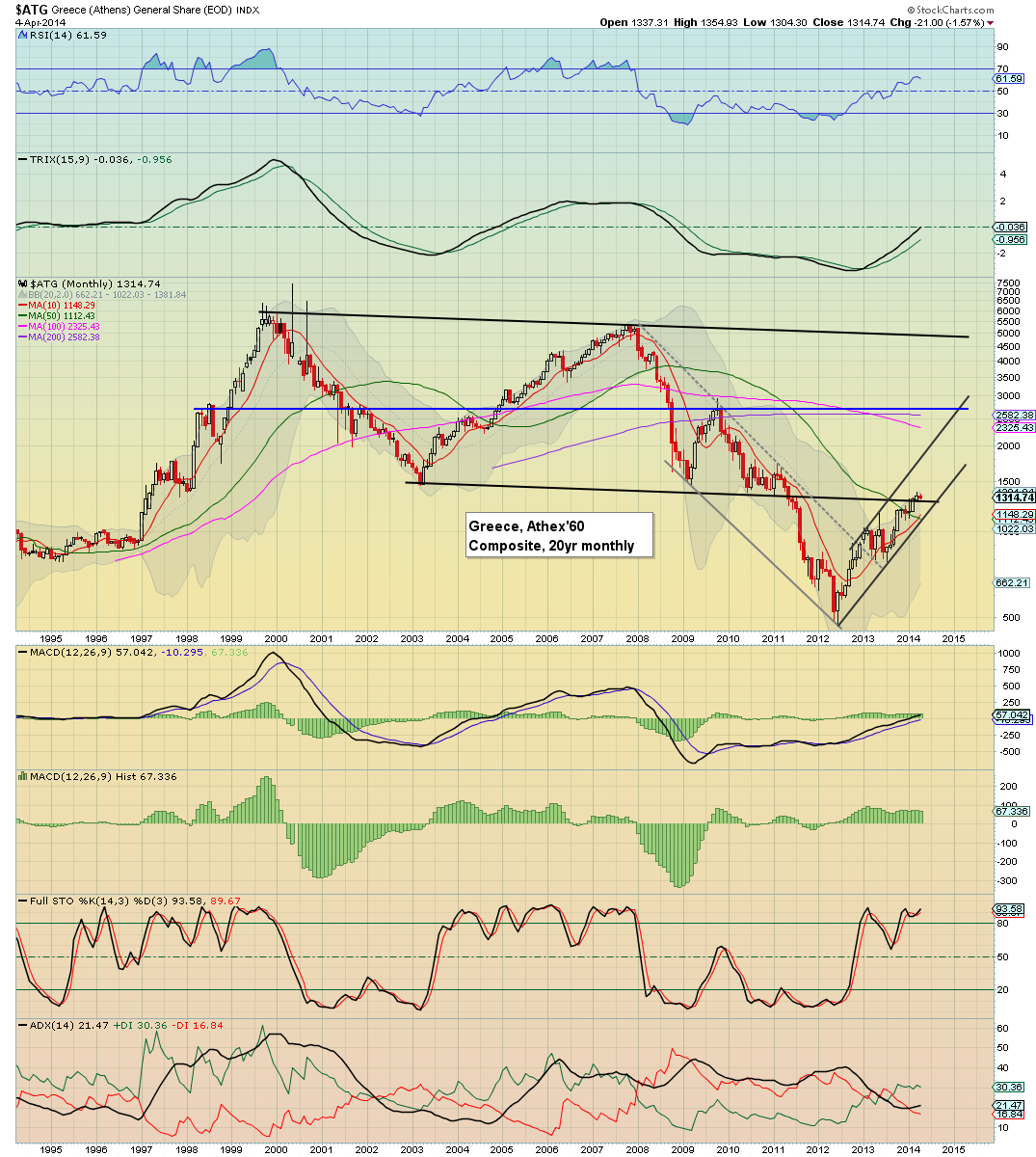 The Greek market is sitting in the target zone for this spring, and a rollover is very possible here. Primary downside for the summer would be the big 1000 psy' threshold. 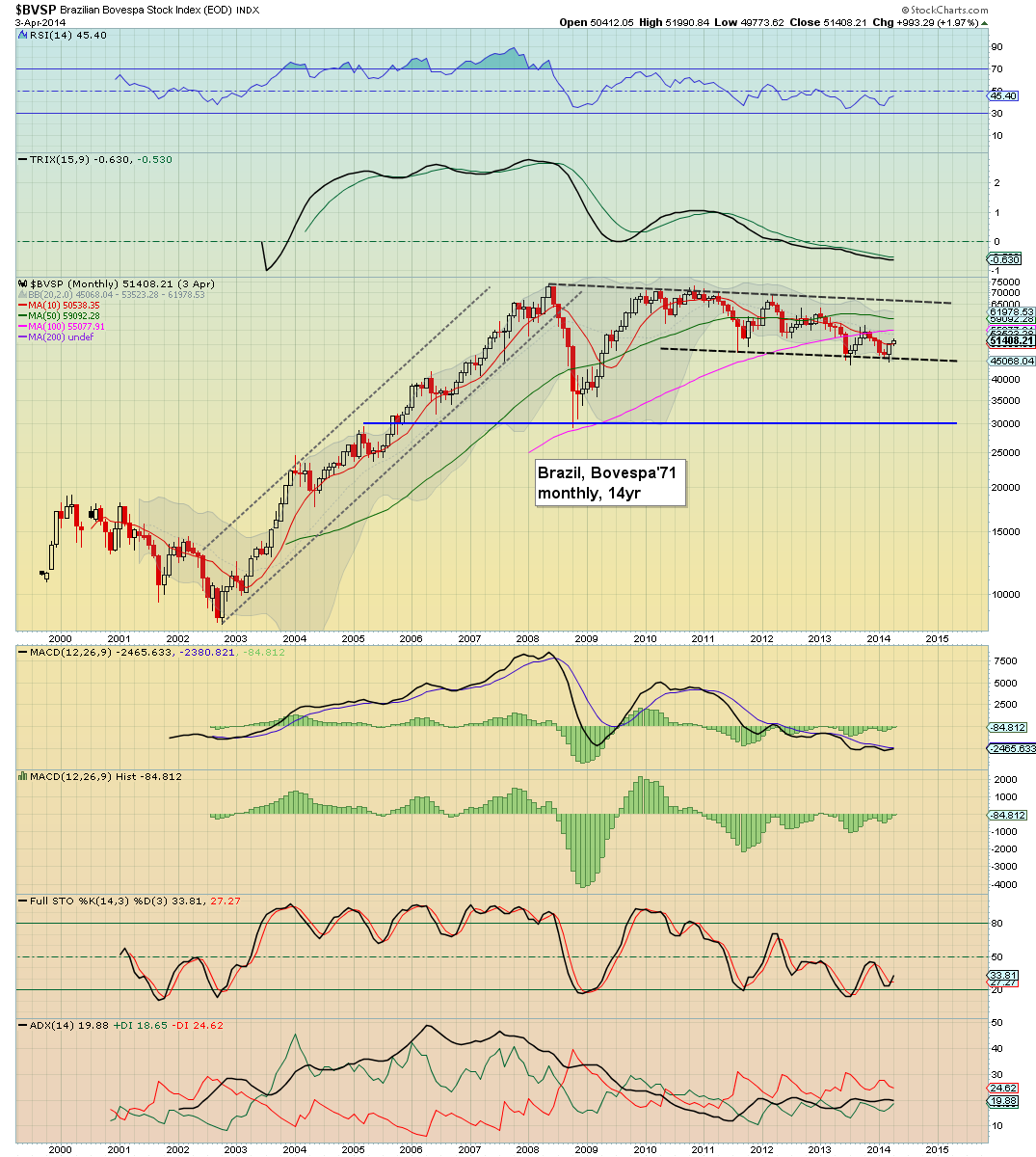 The Bovespa has started a second month higher, but the recent key support was marginally broken. Equity bulls had better not fail to keep pushing higher, or the next down wave will likely be to the low 40000s, which is a clear 20% lower. 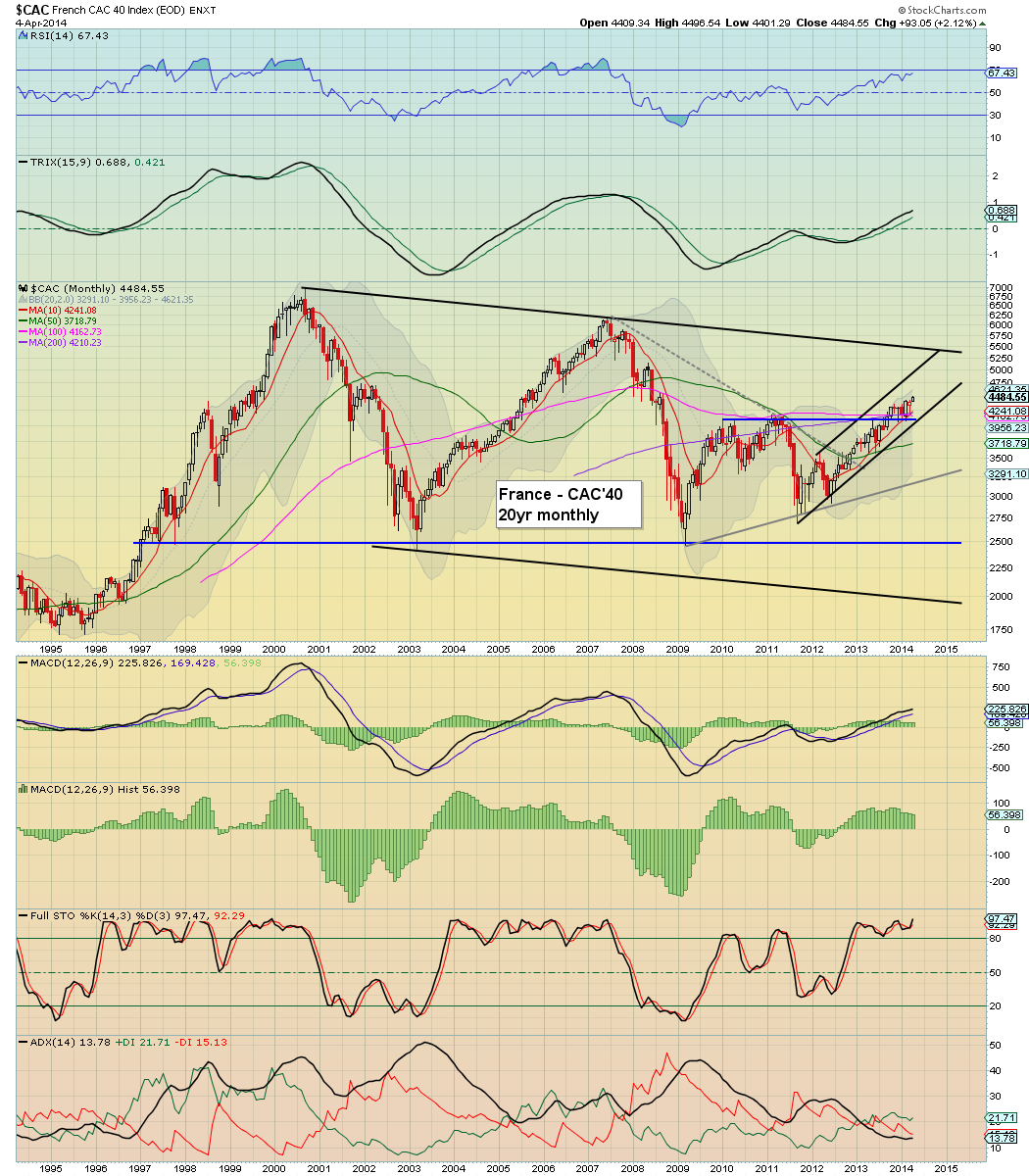 Despite the ongoing capital out flows, the CAC continues to climb. There is nothing particularly bearish in the immediate term. A rollover this spring/summer would offer (best case) downside to the 3750/3500 zone. 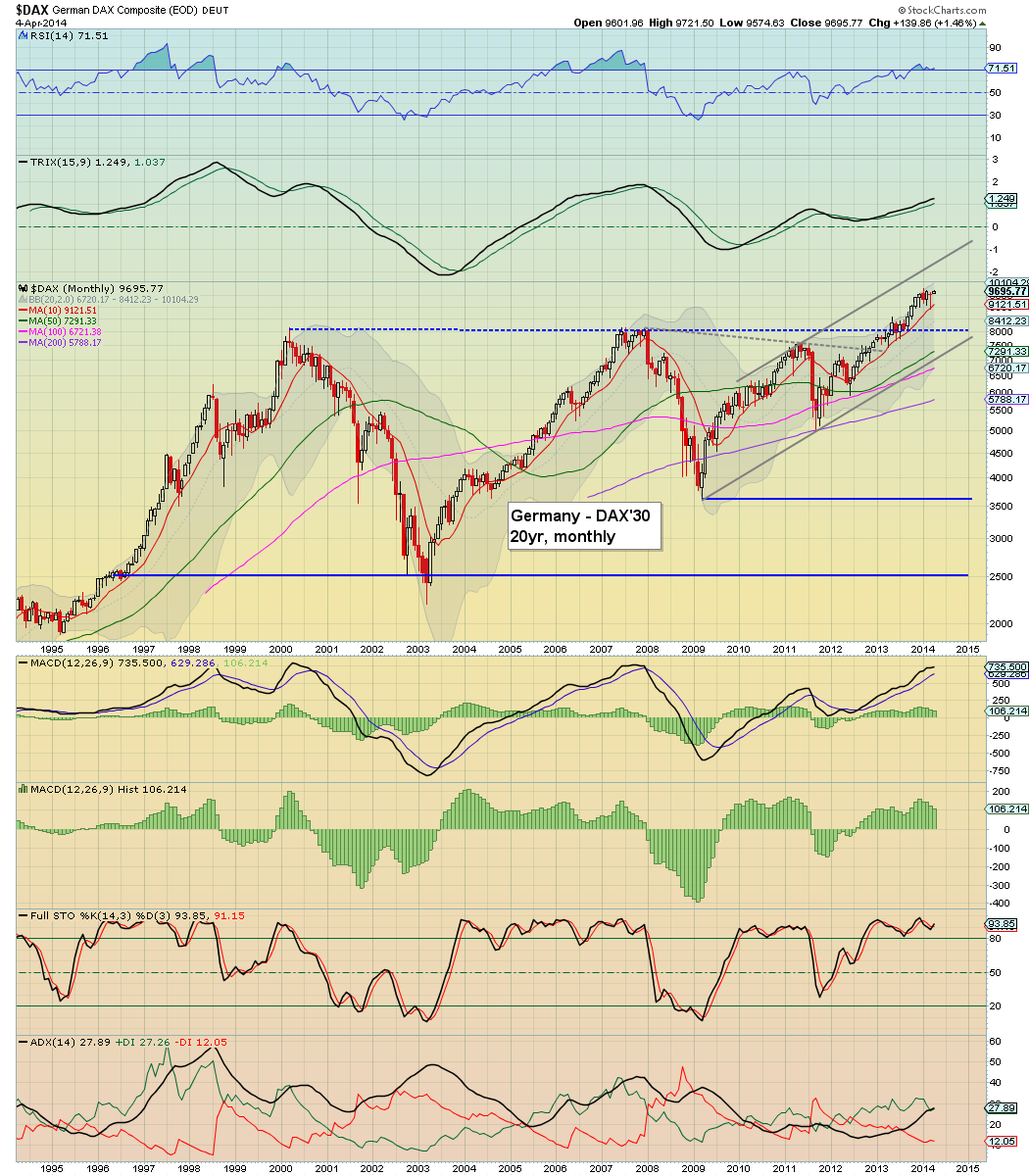 The economic powerhouse of the EU still looks pretty strong. The only issue is whether the DAX can push a further 3% higher to hit the giant psy' level of 10000. Underlying MACD cycle (green bar histogram) continues to tick lower, and is vulnerable to a bearish cross within 2-3 months. 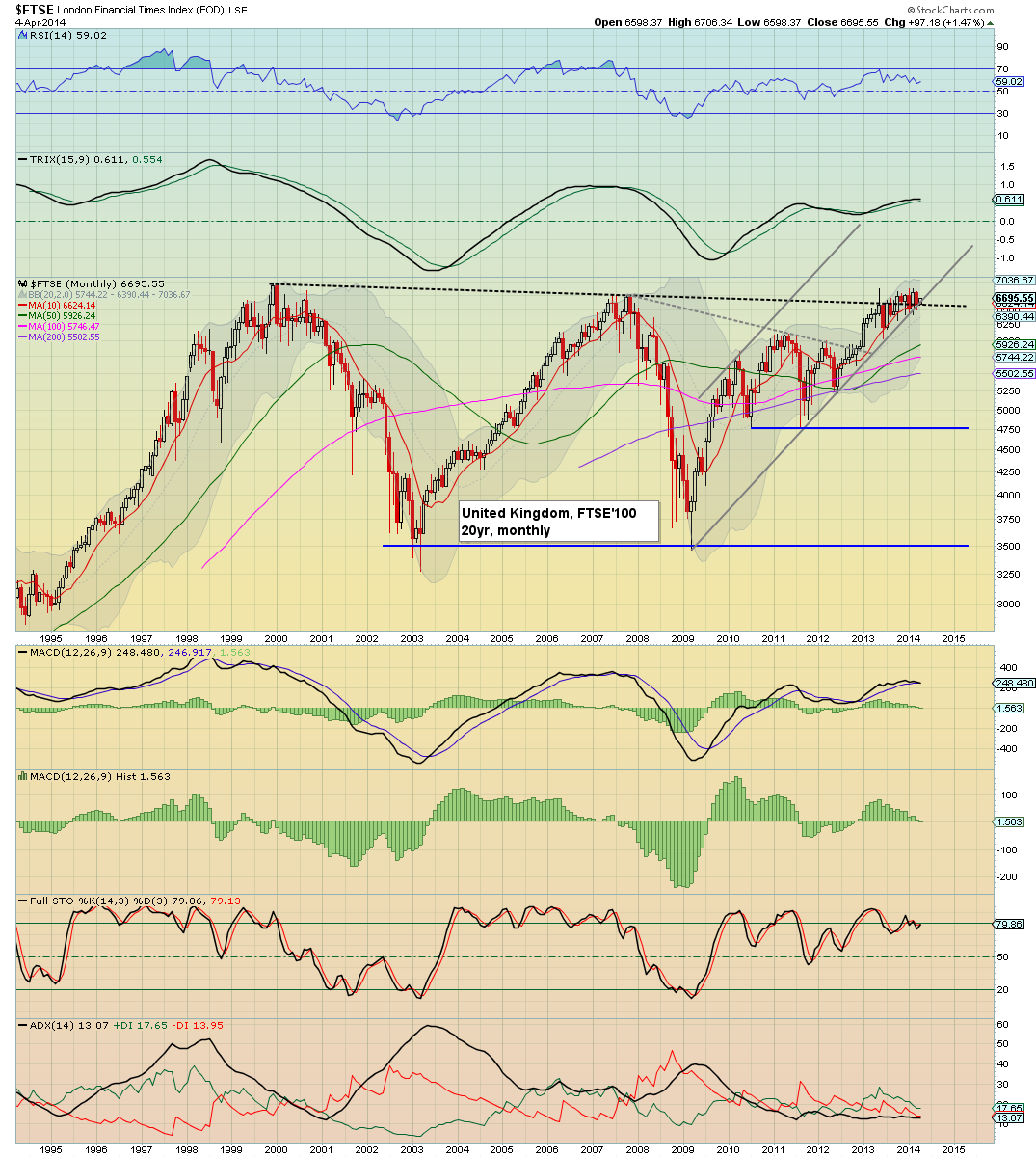 Price action in the FTSE remains very clustered, and seemingly stuck in the 6600/6700s. The UK market is yet to take out the bubble high of late 1999. Downside for the summer would be 6000, but that is only 10% lower. 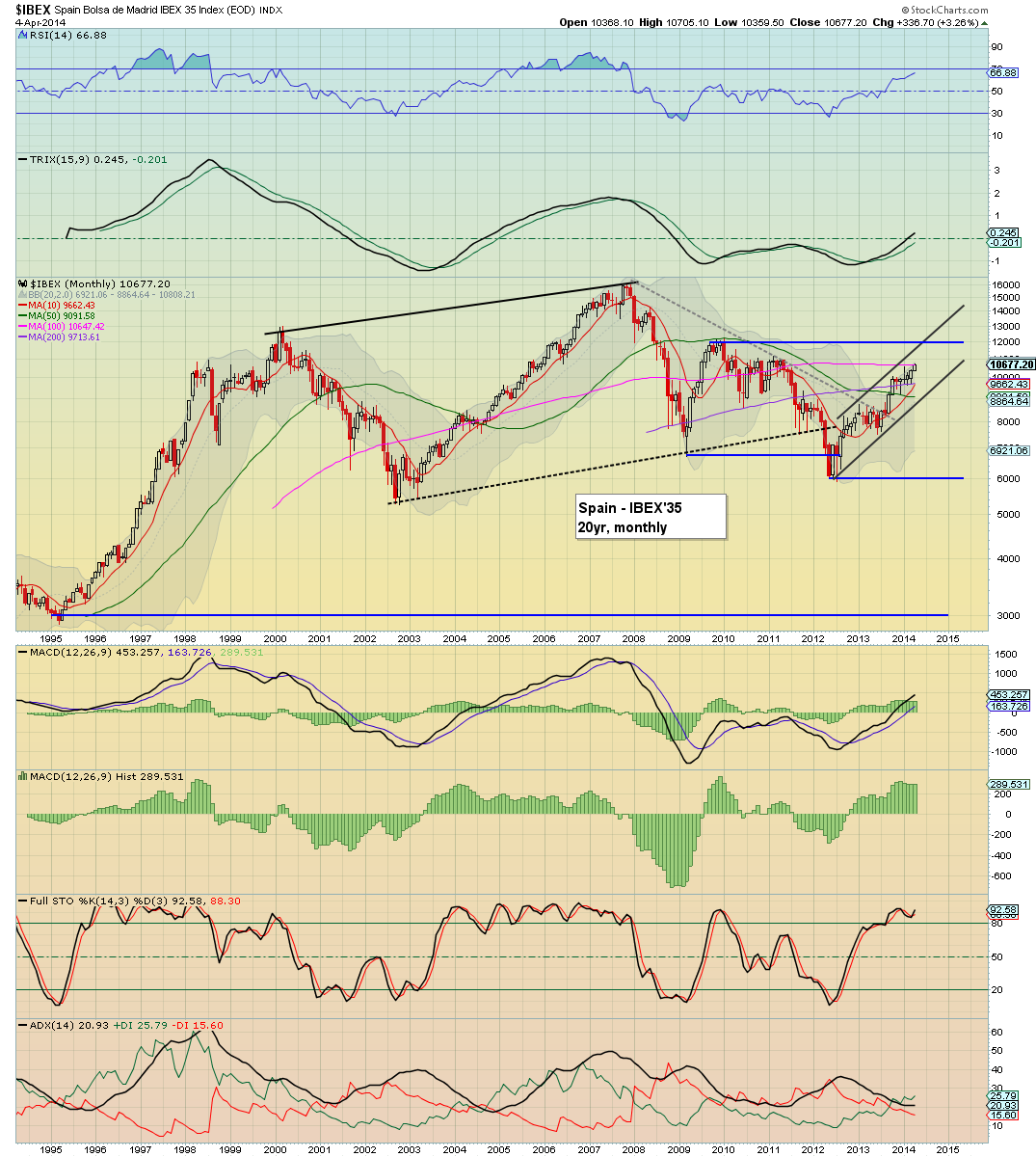 The IBEX looks strong, and seemingly headed for the late 2009 bounce top in the 12000s. If the broader world equity markets can at least 'hold together' for another 1-2 months, there is definitely the chance that the IBEX can ramp a further 10%, before a summer rollover. 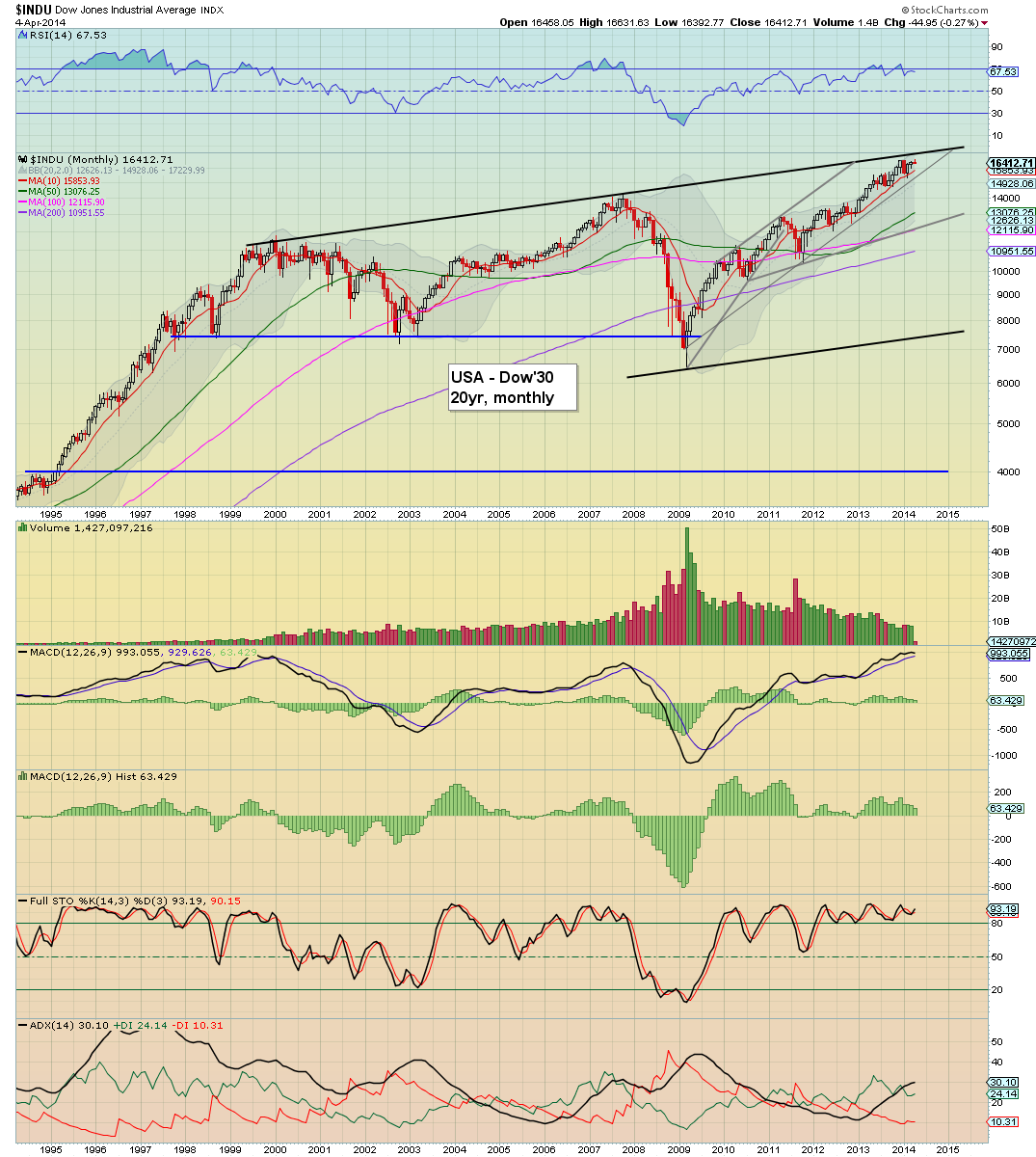 The mighty Dow has finally broken the Dec'31st' 2013 high of 16588 this week, but the weekly close was moderately bearish. Monthly charts are offering the low 17000s in May

It is notable that the MACD cycle for the Dow is exceptionally weak, and could turn negative in the very near term. Any monthly close <15800 will open the door to a summer correction. First downside target is around 14000. 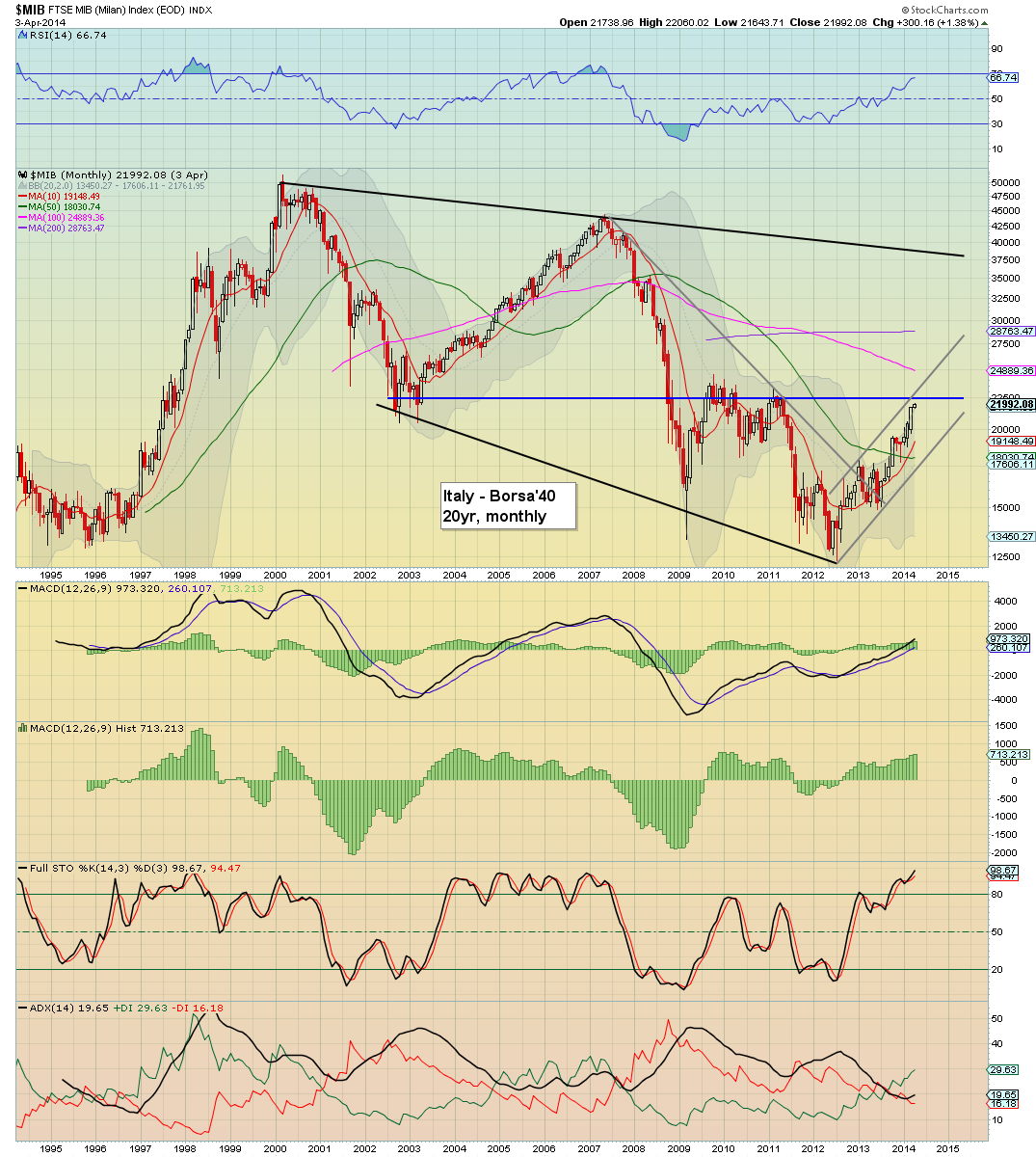 The Italian market is now at the threshold of key resistance in the 22000s. I do not expect the Borsa to put in a monthly close >23k this spring. It has had a huge climb of around 90% since summer 2012, and is due at least some degree of retracement. 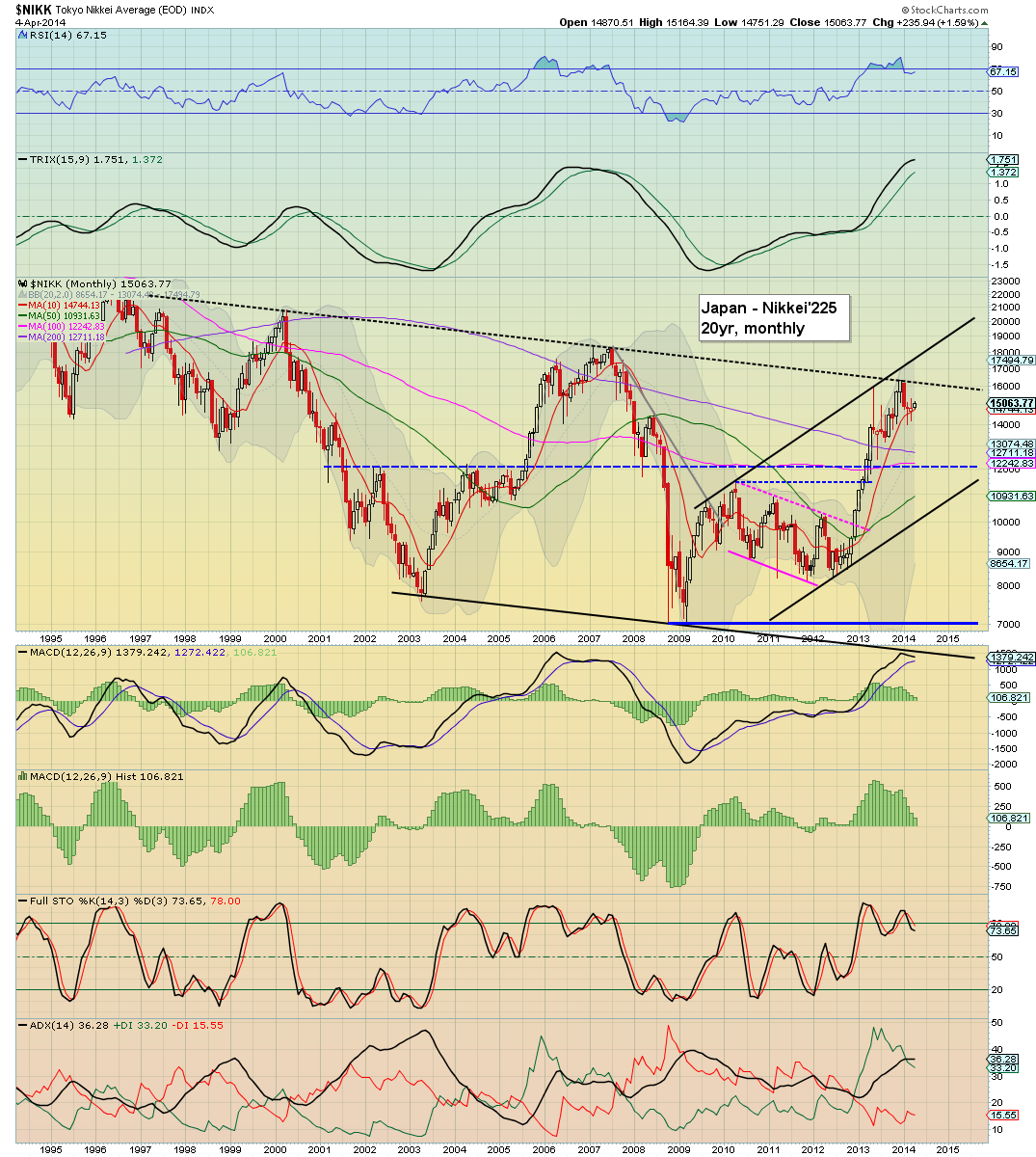 The JCB continue to print, and there are renewed rumours of increased stimulus packages. Yet, the Nikkei continues to struggle, and remains under declining resistance. Equity bulls just need a monthly close >16k, but that sure looks difficult. Downside for the bears this summer looks to be 12000, perhaps even the giant psy' level of 10000. 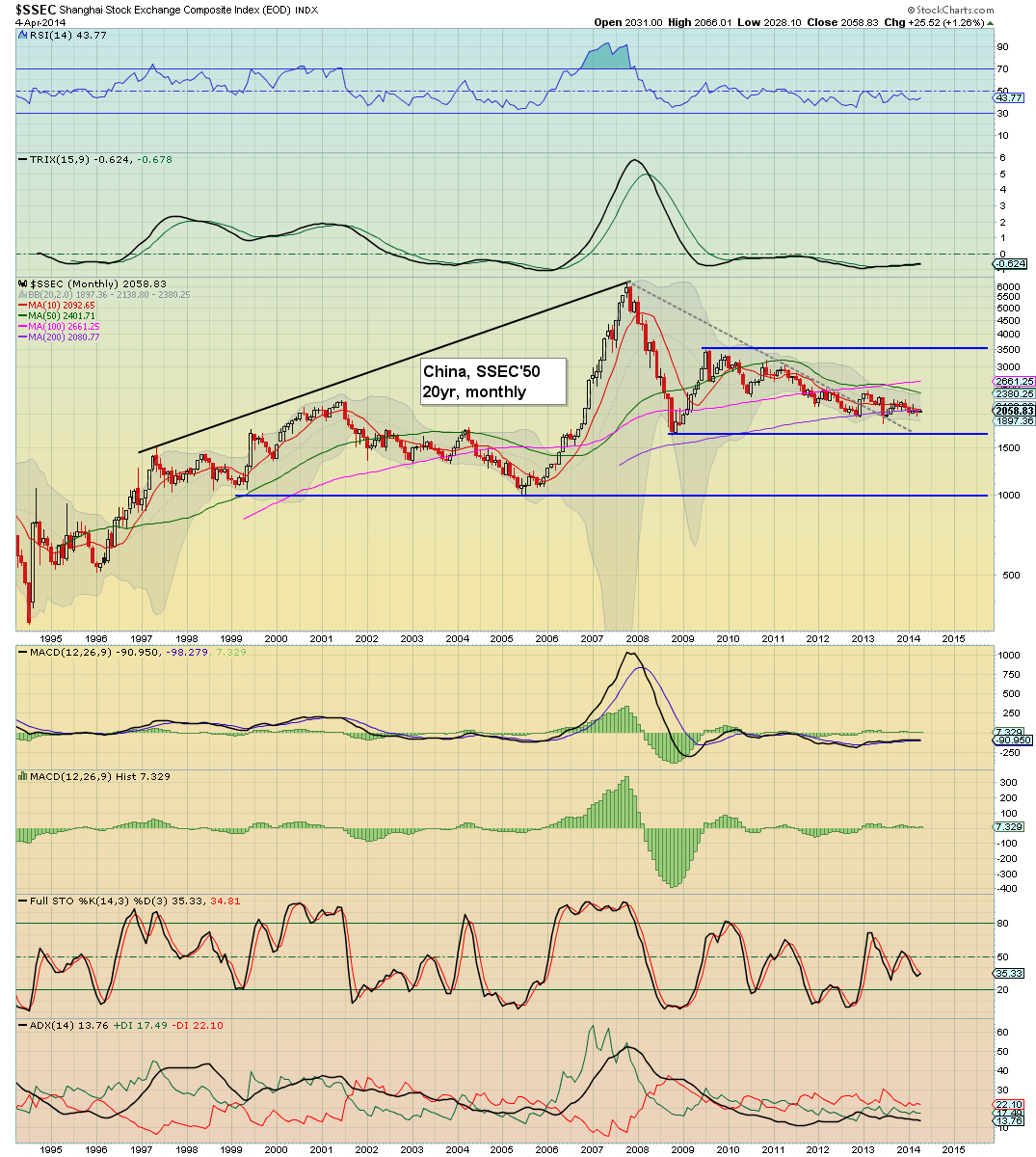 The China market remains relatively subdued, and is stuck in the very low 2000s. Any monthly close <2k, will open up 1750/1500. A return to the 1000 level looks exceptionally unlikely, not least if the rest of the world indexes rally into year end.

So..a fair few of the targets that I set last summer are starting to get hit, most notably in the EU indexes. What is clear, the equity bulls face increasing downside pressure as we trade across April, and more so..into May. I see a concrete wall for most world indexes this late spring.

The following outlines what I am seeking... 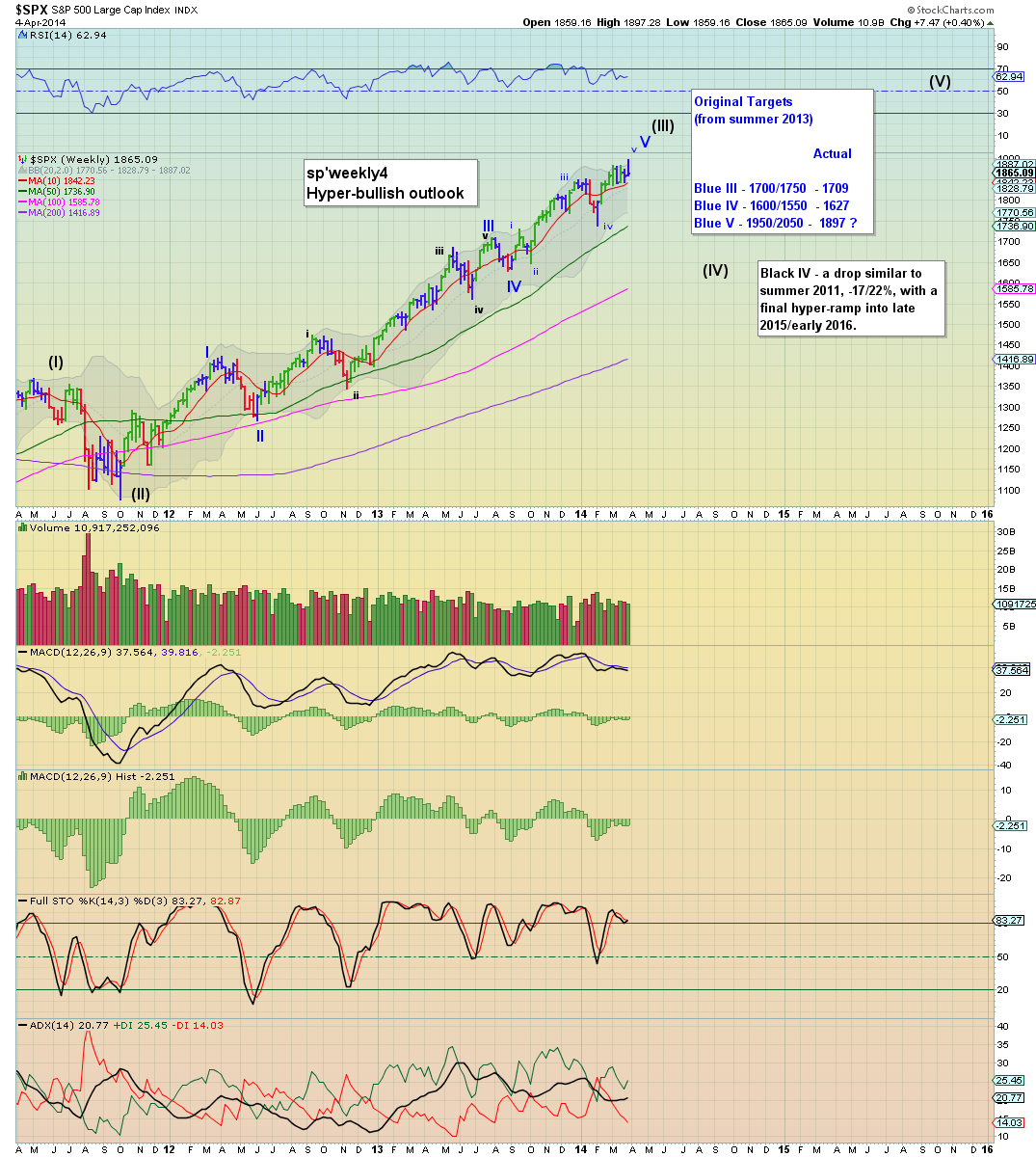 Even if we get a strong down wave this summer, I'm still very much resigned to renewed VERY strong upside into late 2015/early 2016.

Frankly, there is hardly anything of significance due next week. The only real aspect of note are the FOMC minutes - due Wed' 2pm. The market will certainly give that some attention. Other than the Fed press release, there isn't much else.

There are a scattering of Fed officials on the loose (as ever), but nothing from Yellen.


Likely upside into early May

As I feared last summer, the market looked set for 'general upside into late spring 2014'. What has been particularly annoying, is how the market has repeatedly teased the bears. Even the recent price action  from 1883 to 1834 was just another tease, only to result in new highs..just this past Friday.

Barring a break under the weekly 10MA - which will be in the sp'1850s next week, I simply can't consider shorting the market, until at least another wave higher. Indeed, next week, if the price action looks okay, I'll probably go long the indexes, with a very tight stop in the 1850s.

Interest rates and the market

There remains a great misconception amongst both economic bulls and bears alike, that US equities will completely unravel and implode once the Fed raise interest rates. History would suggest that is most certainly not likely going to be the case.

I was inspired to end the week highlighting the relationship between interest rates/equities by Don Harrold. Mr H' is one of the better, and long standing financial youtube posters...

I realise some of you out there will consider Harrold's outlook as borderline heresy, but I absolutely would hope everyone at least consider it a viable outcome.


Will the Fed really raise rates?

It also remains a general consensus - particularly amongst the doomer bears, that the Fed can never raise rates again. I'm well aware of some of the implications of a rate rise - such as US govt' debt servicing costs. All things considered though, I'd at least think they can get away with returning rates to half of the historical norm (of the last 15-20 years).


What is my guess on where we are headed?

I do believe the Fed will eventually raise rates, but it is difficult to guess when the maniacs at PRINT HQ might do this. Further, just how high might they want to take rates? 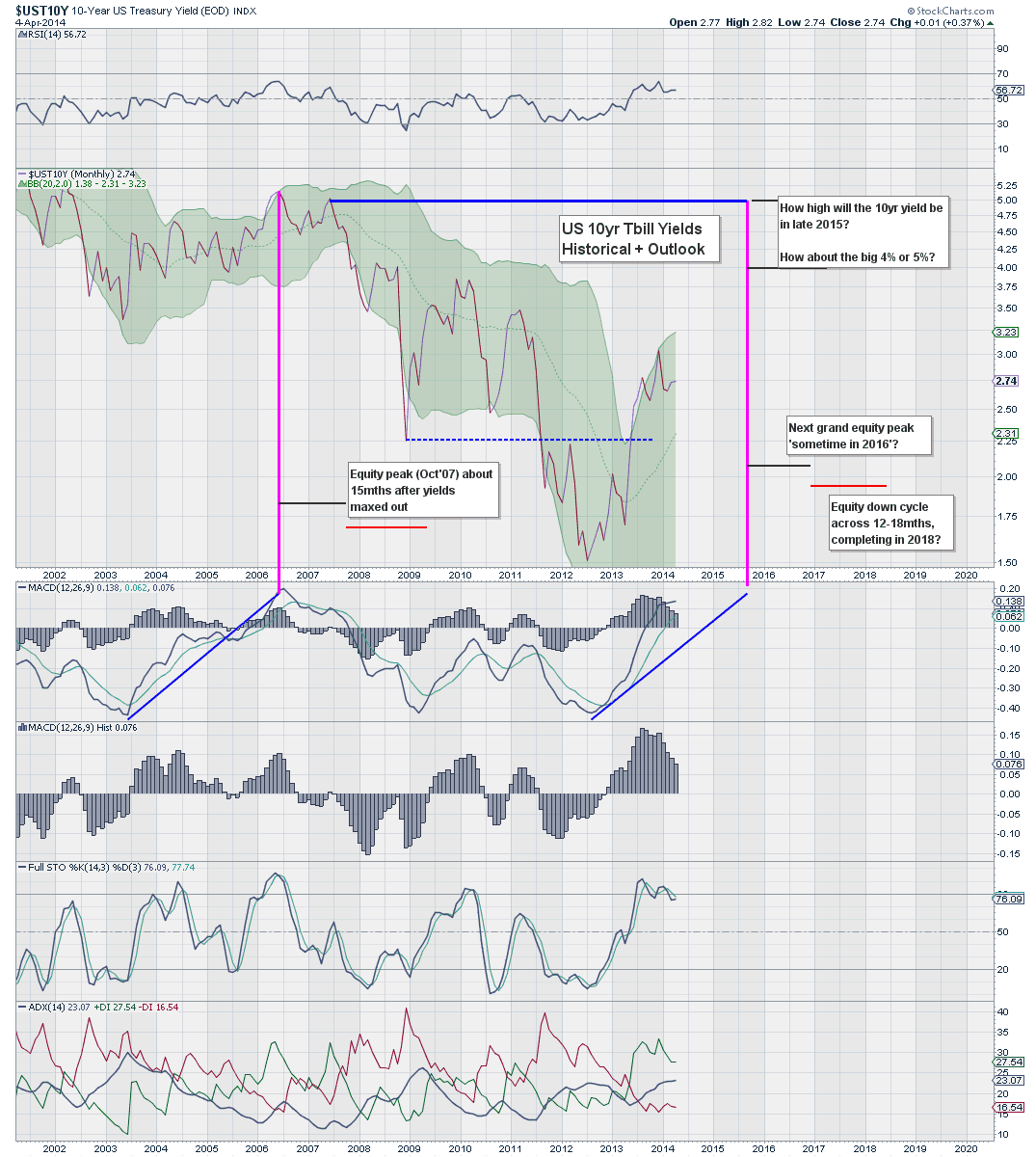 The ECM cycle would suggest rates reach a peak in late 2015, with equities perhaps peaking 3-6 months later in early 2016.

One scenario would be that the Fed raise rates to 1, maybe 2% - with the 10yr at 4/5%, only to then go full reverse, as a chain reaction begins of all sorts of nasty economic time bombs. We know Yellen supports negative int. rates, and it'd sure not surprise me if this becomes the case in the 2018/22 time frame.

As ever, all comments are welcome.

Goodnight from London
--
*the weekend post will be on the world monthly indexes
Posted by Permabear Doomster at 04:00:00
Email ThisBlogThis!Share to TwitterShare to FacebookShare to Pinterest

US indexes closed significantly lower, lead by the Nasdaq and the R2K, lower by -2.6% and -2.3% respectively. The headline sp/Dow indexes fared much better, lower by -1.2% and -1.0%. Near term outlook is uncertain, and depends on whether the market loses the 1850s next week. 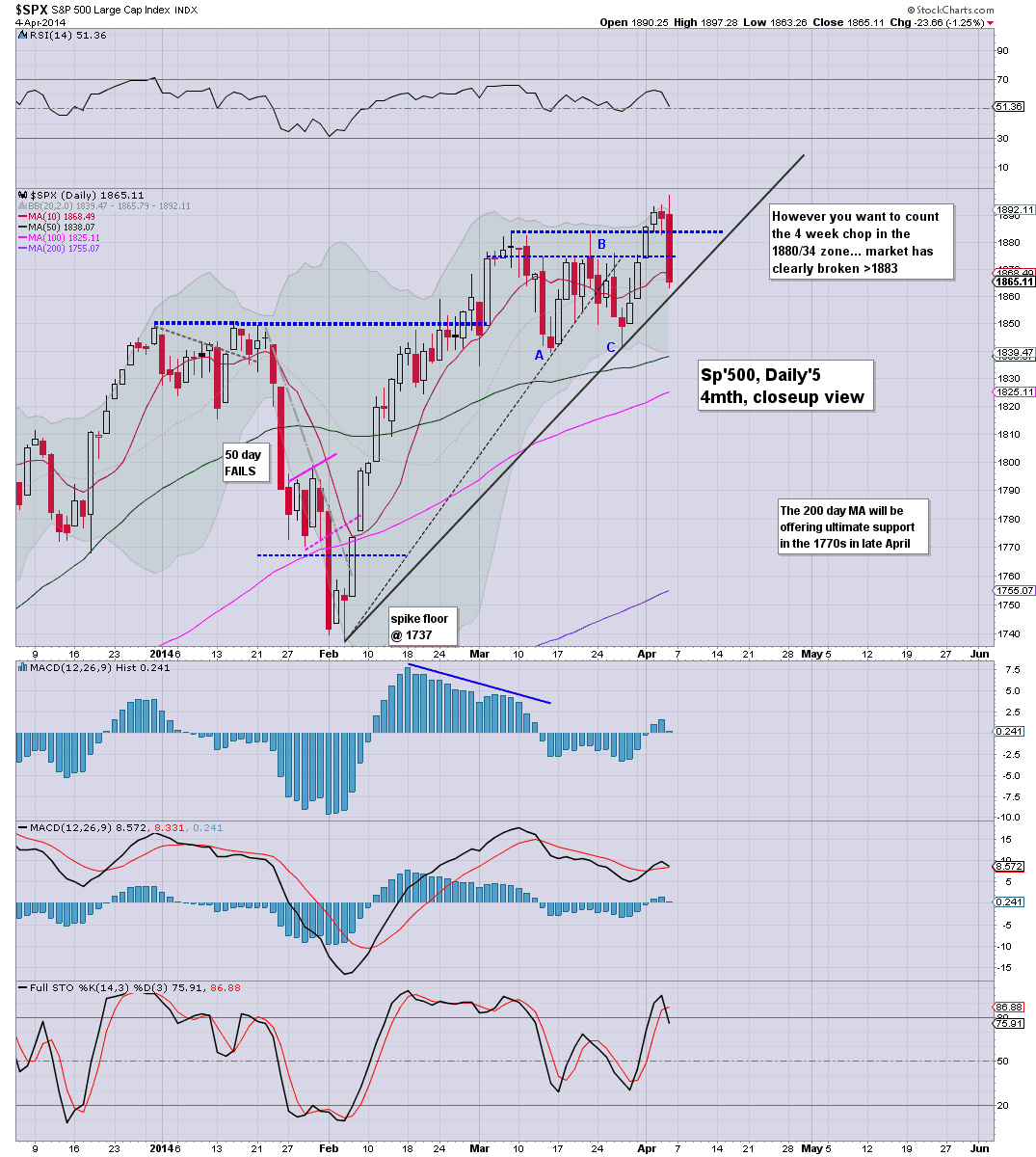 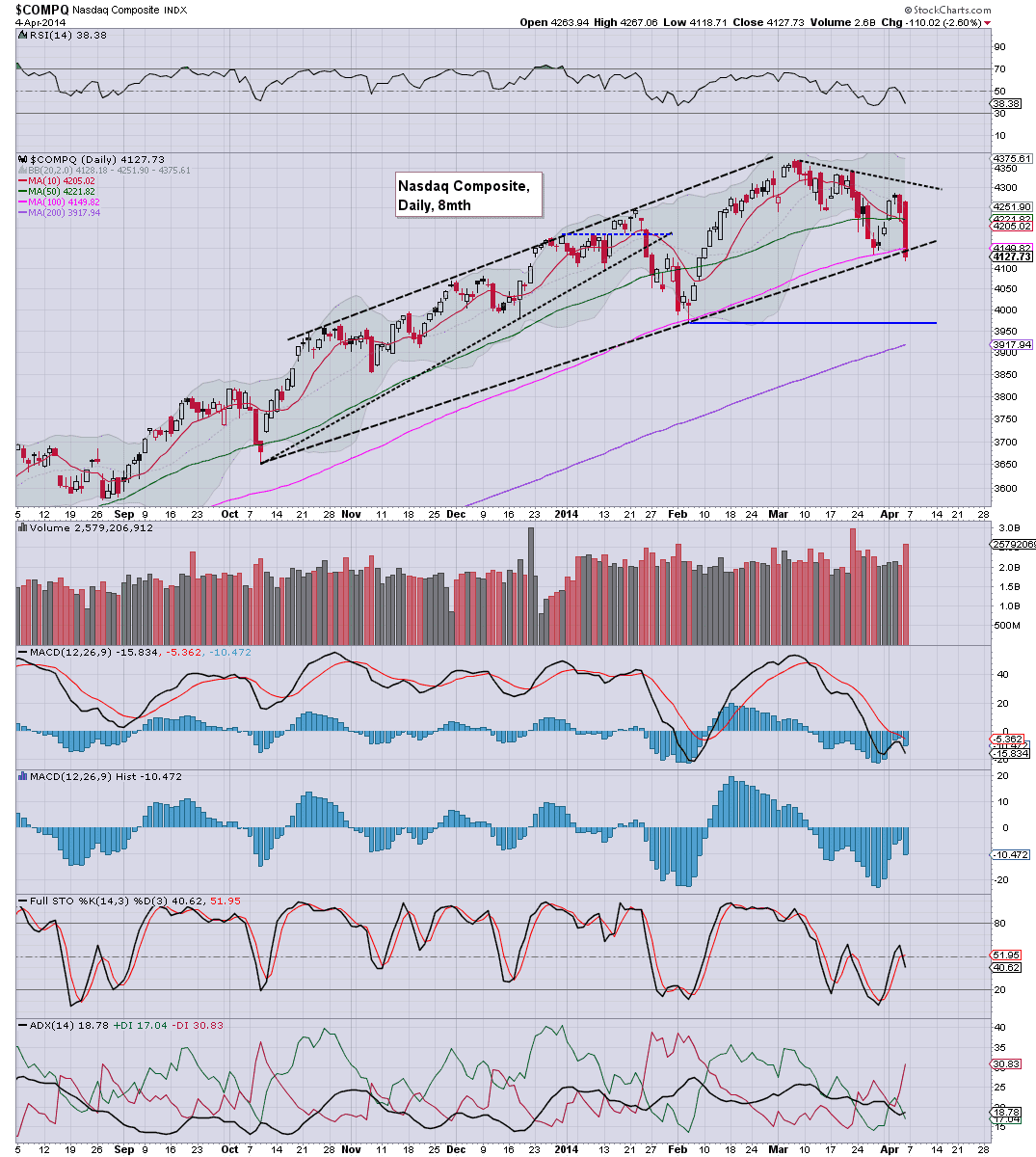 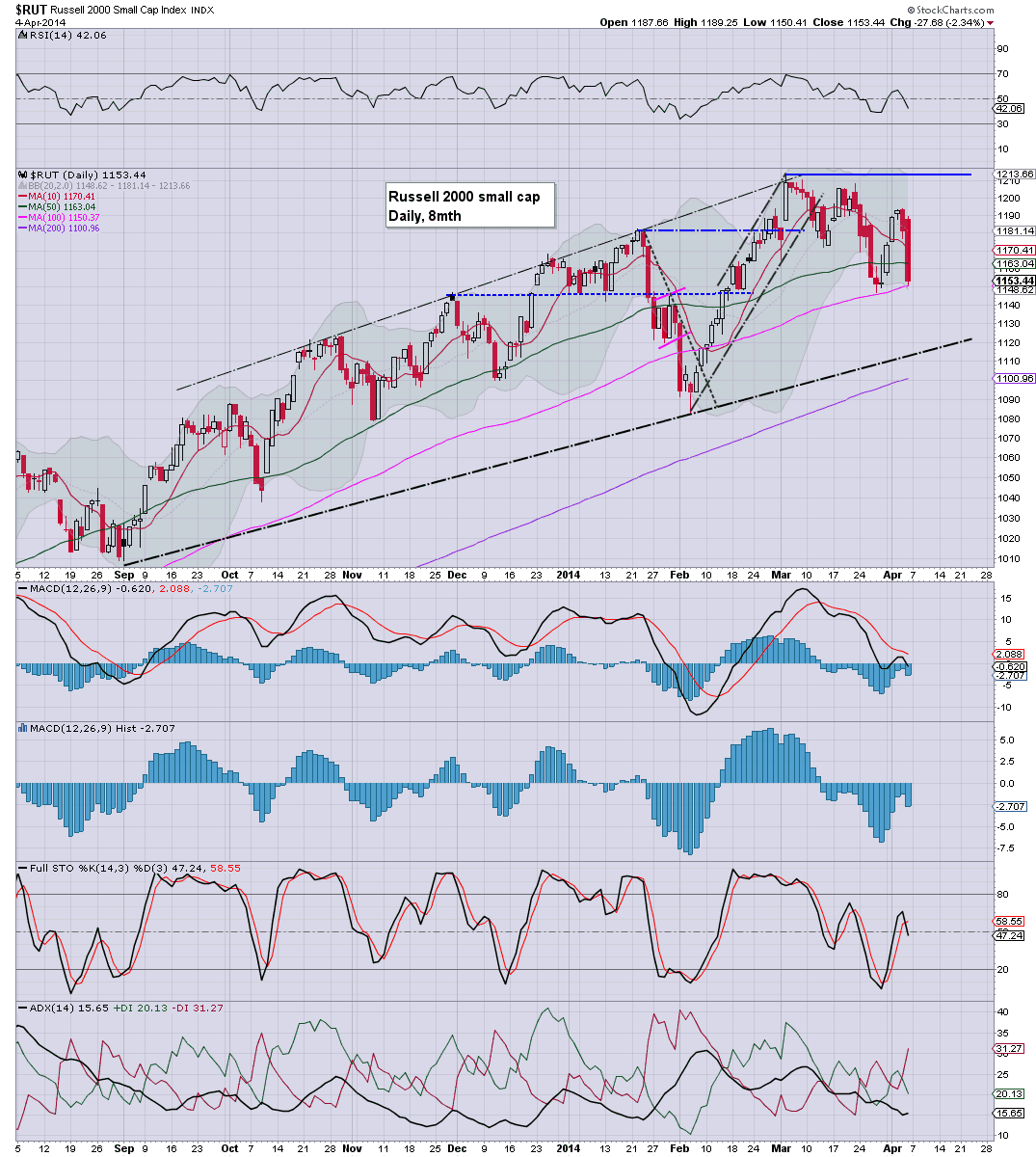 Perhaps most notable, is that today's daily candle was a bearish engulfing candle - where we broke above yesterdays high...but closed deeply below yesterdays low.

Near term outlook is indeed uncertain. Equity bulls need to hold the weekly 10MA - which will be in the 1850s next week. Considering the lack of upside power in the VIX, I'm inclined to believe the equity bulls will manage another wave higher.
-