With the indexes closing around 1% lower, the VIX managed to battle its way higher across the day, closing +8.3% to 16.37. This remains a very low VIX, and there is a considerable journey ahead just to hit the big 20. 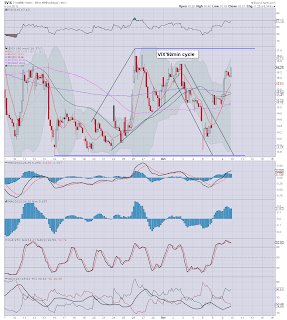 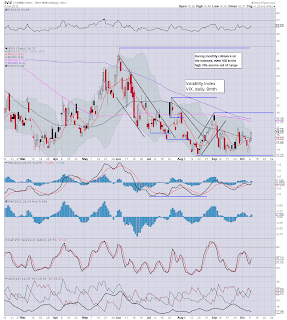 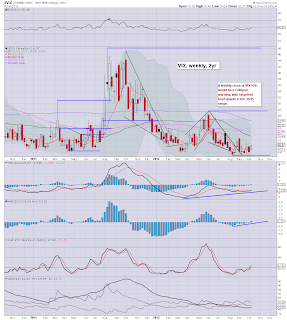 A day when the VIX never really showed any major moves, it was more of a gradual stair step higher.

The first target is take out the recent high of 17, that will open up 18/19, which seems very viable sometime before this week wraps up.

The huge VIX weekly cycle is now positive on the MACD (blue bar histogram) cycle, and there is plenty of easy upside to the upper bollinger of 22/23.


The big issue for this Autumn - will the VIX explode?

At the June low, when the SP' floored at 1266, the VIX was only in the 27s. That was pretty surprising at the time, and in retrospect, it looks even more bizarre. I had expected at least the mid 30s. I suppose it was a tell that the underlying market was poised for a major ramp into the summer. The power of hindsight huh?

I think its going to be the case that the market will need to be seriously freaked out over something major. Natural 'market down cycles' are just not going to do very much to the VIX, other than a brief move into the 20s.

US rating downgrade.
Congress unable to agree on delaying the fiscal cliff, with GDP falling 3-5% in Q1 2013
A Eurozone member exiting
Middle Eastern conflict, sending Oil to the moon...beyond the 2008 spike high of $147.
--

I find it very implausible that we can break <1400 for at least a few more weeks.

The VIX was trying to break higher near the close, but its still lacking a real kick to it. 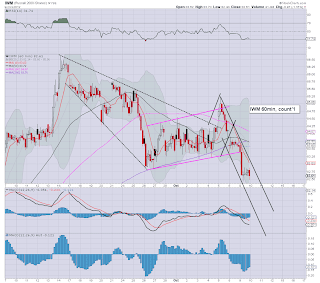 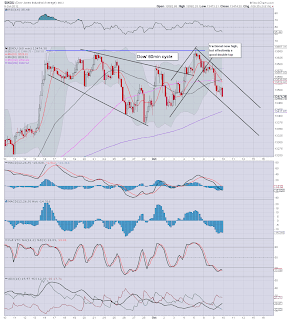 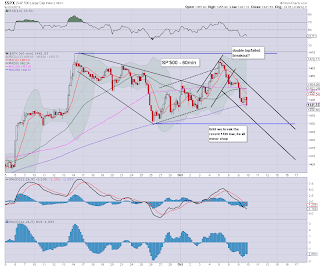 So we close at the lows of the day, thats pretty good to see, its been a while since we had some action like today. We actually saw the indexes decline one full percent!

With the VIX closing +8%, that is starting to show a little strength, but of course, we're still way below the important 20', where the VIX moves are much more reliable and useful to follow.

More across the evening.
Posted by Trading Sunset at 21:03:00
Email ThisBlogThis!Share to TwitterShare to FacebookShare to Pinterest

Well, with one hour left, bears are holding tightly onto most of the declines. We have a clear micro-bear flag on the hourly chart, and that 'should' in theory break lower this closing hour, or early tomorrow.

VIX remains moderately higher, no sign of any major market 'concern' yet. 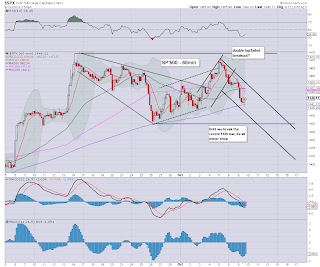 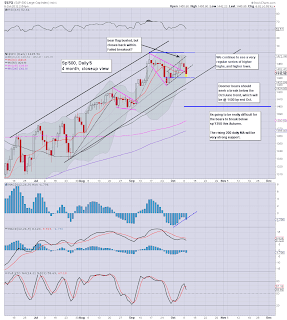 An interesting day so far, lots to consider, but I'll deal with that later.

A close under 1440 would be a bonus. Bears should at least be content that 1450 was broken, and we're some ways below that.

back after the close
Posted by Trading Sunset at 19:56:00
Email ThisBlogThis!Share to TwitterShare to FacebookShare to Pinterest

Lets be clear, the index declines only rank as moderate, most indexes are down by 0.75-1%. The VIX is similarly only 6% or so higher. Yet its the first drop of any significance in over two weeks. 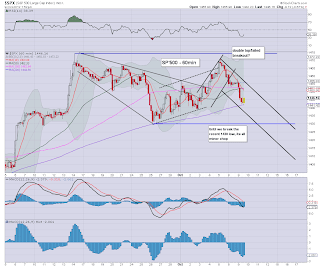 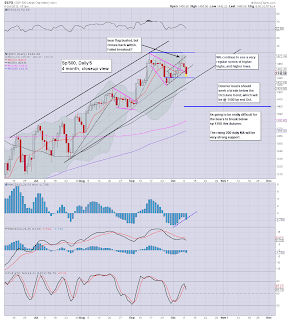 It really is a case of 'can we actually close red, with declines of this..or better?'.

With 2 hours to go, there is plenty of time for the bears to build on current losses, or for the bull maniacs to achieve another last hour recovery.

Considering it was a bear flag we broke though - as seen clearly on the daily chart, I'm guessing we've a good chance at breaking 1430 within the next few days, and that opens a move as low as the key cycle low of 1397.

I remain short, and looking to exit Thursday/Friday.

The break under 1450 - which was a clear bear flag, indeed resulted in a rather nice snap lower. We've moved decisively below the bear flag, and the next target is an attempt on the 1430 cycle low.

The VIX is finally starting to pick up some momentum. 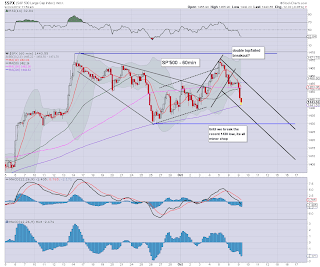 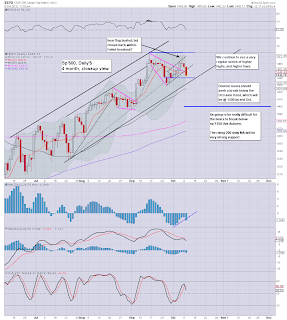 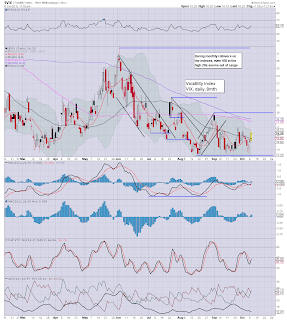 Its been a good morning for the bears. The 7 day bear flag - with a false breakout no less, has now concluded, and we're on the way down.

As ever, the only issue is...how far down do we go?

The bears had just better hope we don't close green..urghh !

My best guess for the close 1437/35, although it depends on if we get a last hour stupid spike higher. Regardless..we are falling though, and VIX is indeed even showing some more significant strength.

back at 2pm
Posted by Trading Sunset at 16:57:00
Email ThisBlogThis!Share to TwitterShare to FacebookShare to Pinterest

10am update - on the edge of a minor breakdown

It is a rather muted open, but its starting to get more choppy as I type, and we are now getting pretty close to breaking below the important 1450 level.

The VIX is still only marginally higher though. Maybe some dramatics later today on the streets of Greece will spook the VIX higher? 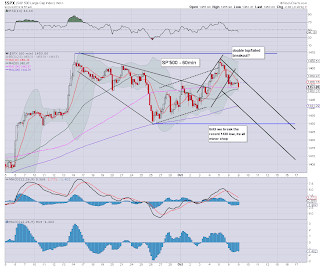 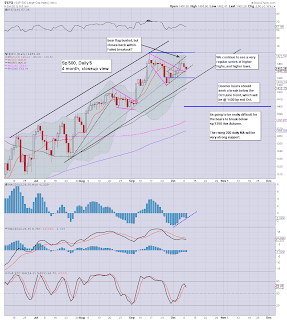 Lets see if we can break below the bear flag. 1450 is the first clear level, but I'd really want to see 1445 for a more decisive break. Any close <1450, should open up yet another attempt to break the recent low of 1430. Clearly, the latter won't happen today..or probably even tomorrow.

Good morning. Futures have tapered off from the earlier moderate gains, we're set to open..flat. Exciting huh? There is no significant data due today. Market is likely to be focused on the visit of Merkel to Greece. The key question is whether last Friday was indeed a failed breakout - outside of the bear flag? Yet we closed well within what is a bear flag. The problem for the bears remains that the Dow did post a new high last Friday.

Today, bears need a close under the bear flag-channel of 1450. A close of 1446 or lower would arguably be pretty conclusive, and open another challenge to break the recent 1430 low.

I suppose it is viable we somehow battle our way lower to test the recent 1397 low from Sept'1st, but I'm certainly not very hopeful of that right now. With the VIX still in the low teens, its going to be one mighty difficult task just to briefly hit the important VIX'20 level.

Good wishes for Tuesday
Posted by Trading Sunset at 13:06:00
Email ThisBlogThis!Share to TwitterShare to FacebookShare to Pinterest

With last weeks moderates gains across the main indexes, the monthly charts are all back to being outright bullish. Even the battered tranny (does that conjure an image?) is back to green. 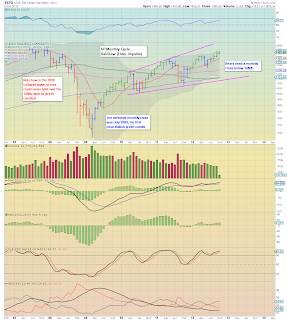 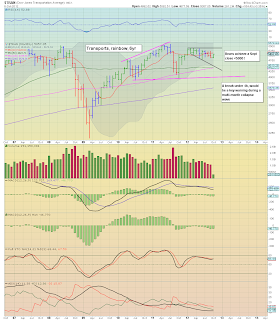 With today being the lowest volume of the year - yes, even worse than what we saw in the tedious August, we're back to long days of nothing.

In terms of price action, we are indeed just continuing to cruise steadily higher. At the current rate of up trend - all else being unchanged, we'll close the year somewhere between sp'1550/1600. Of course, there is a lot of stuff to occur between now and then, but still, the trend is unquestionably UP.

What is especially concerning right now is seeing the tranports having flipped back to a green candle. Although we saw it happen in both August and September, only to close both months red. The doomer bears should be seeking an October close in the transports <4750.

I often focus on the importance of the 10MA, I realise others would favour something else, maybe the 13/39 crossover for instance, but I'm more inclined to keep it simple.

I can only hope, Tuesday will be more dynamic than today.

A very dull trading day. Yes, it was a semi-holiday - with the bond market closed, but still, it was oh so dull. 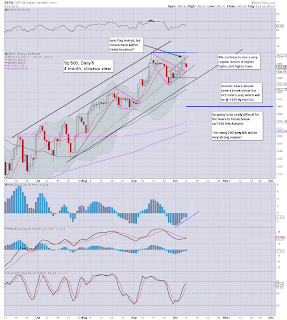 I think the above sp' chart summarises all that needs to be said today. We did close a little lower, but we remain in a broad uptrend, today was day'9 in the trend.

A Tuesday close under 1450 would be marginally interesting, but even then, until I see the recent low of 1430 taken out, this is all still within a larger up trend.