With equities seeing some weakness into the early afternoon, the VIX clawed higher (intra high 14.34), but settling +7.9% @ 13.39. Near term outlook is for continued broad equity upside.. which should keep the VIX pinned within the 14/11 zone into mid May. 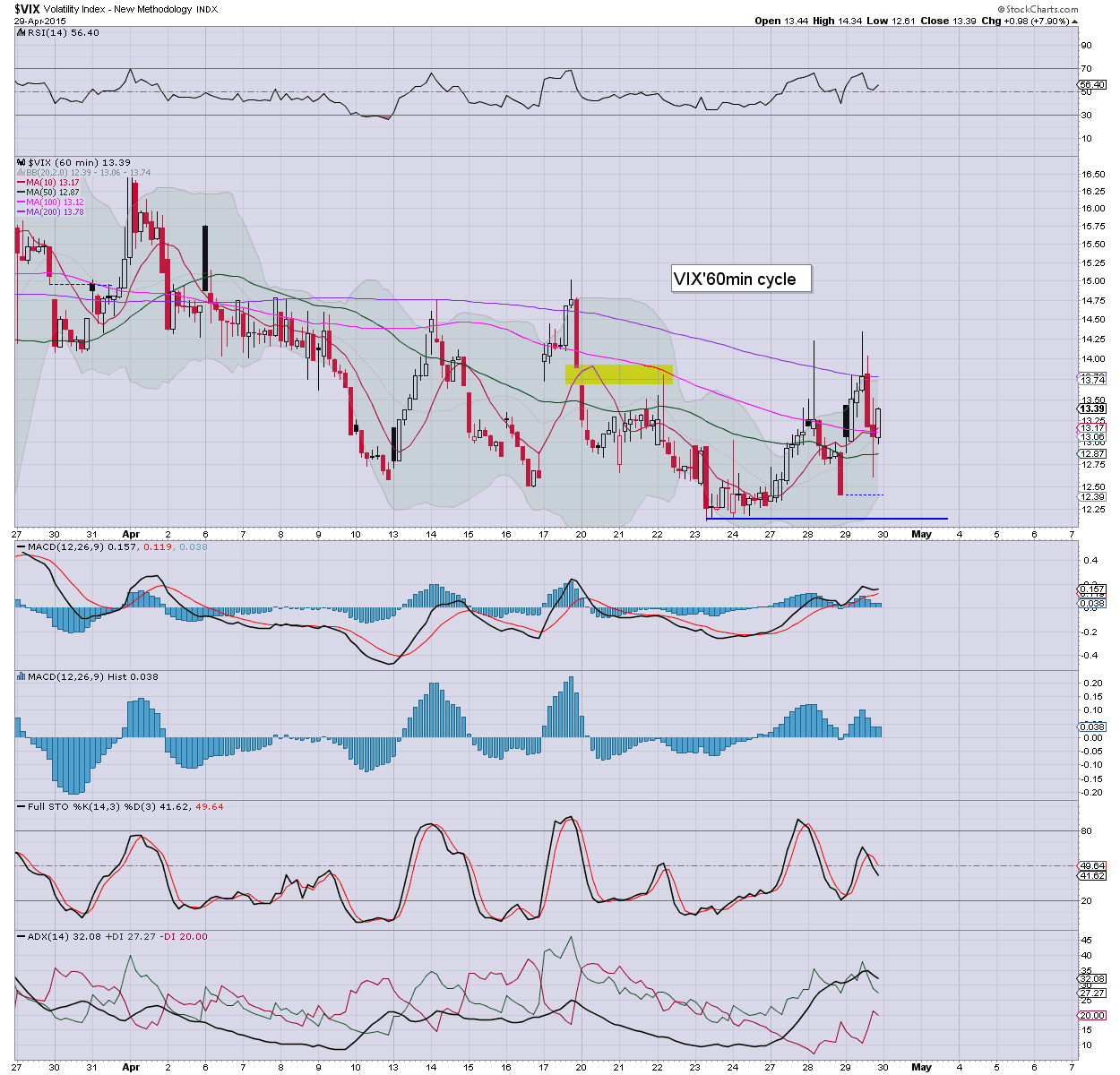 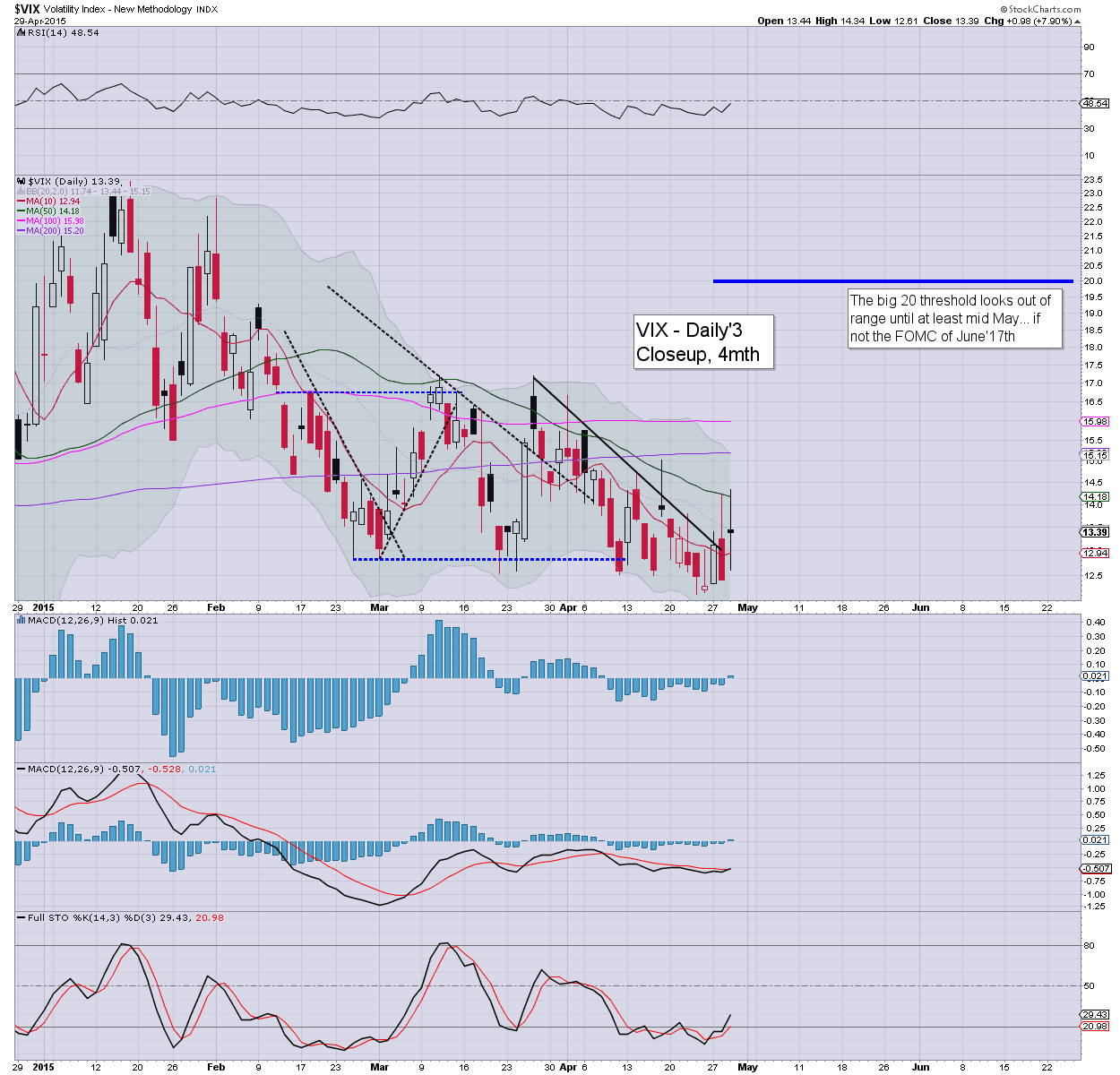 We continue to see sporadic little intraday spikes.. but the highs remain very low... in the low teens.

The big 20 threshold looks unlikely to be challenged until June.
-- 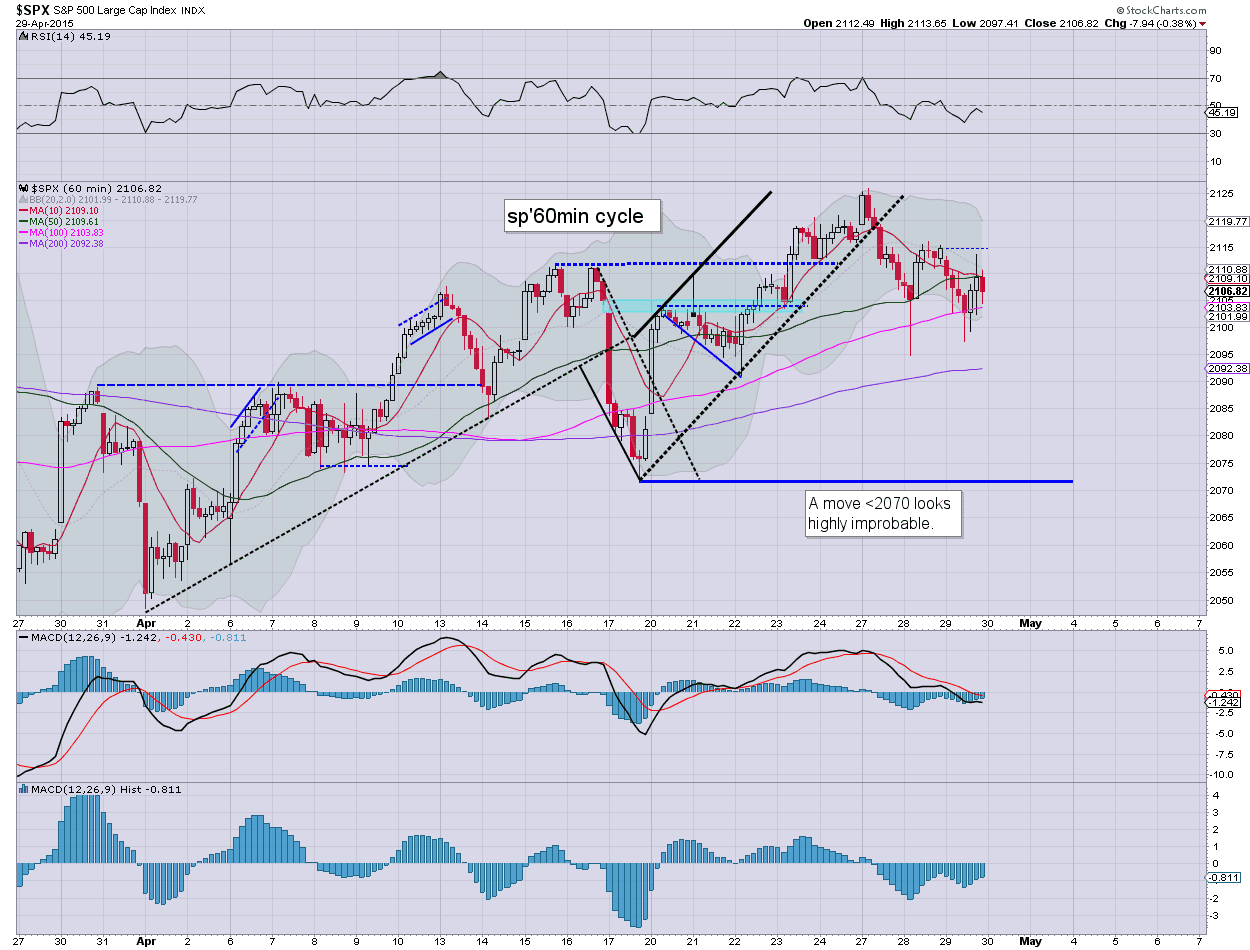 Suffice to say.. an interesting and rather good day for yours truly.
--

Despite the net daily index declines, it remains the case that the equity bears just can't muster any significant.. or sustained downside.

VIX continues to reflect a market with next to zero concern about anything, least of all a GREXIT.

3pm update - clawing into the close

US equity indexes are battling for a positive net daily gain.. as market consensus is that the Fed won't raise rates until at least September. USD is seeing a sig' late afternoon bounce.. as the Euro cools. Metals are seeing increasing weakness, Gold -$5. Oil is similarly cooling, but still +2.5% 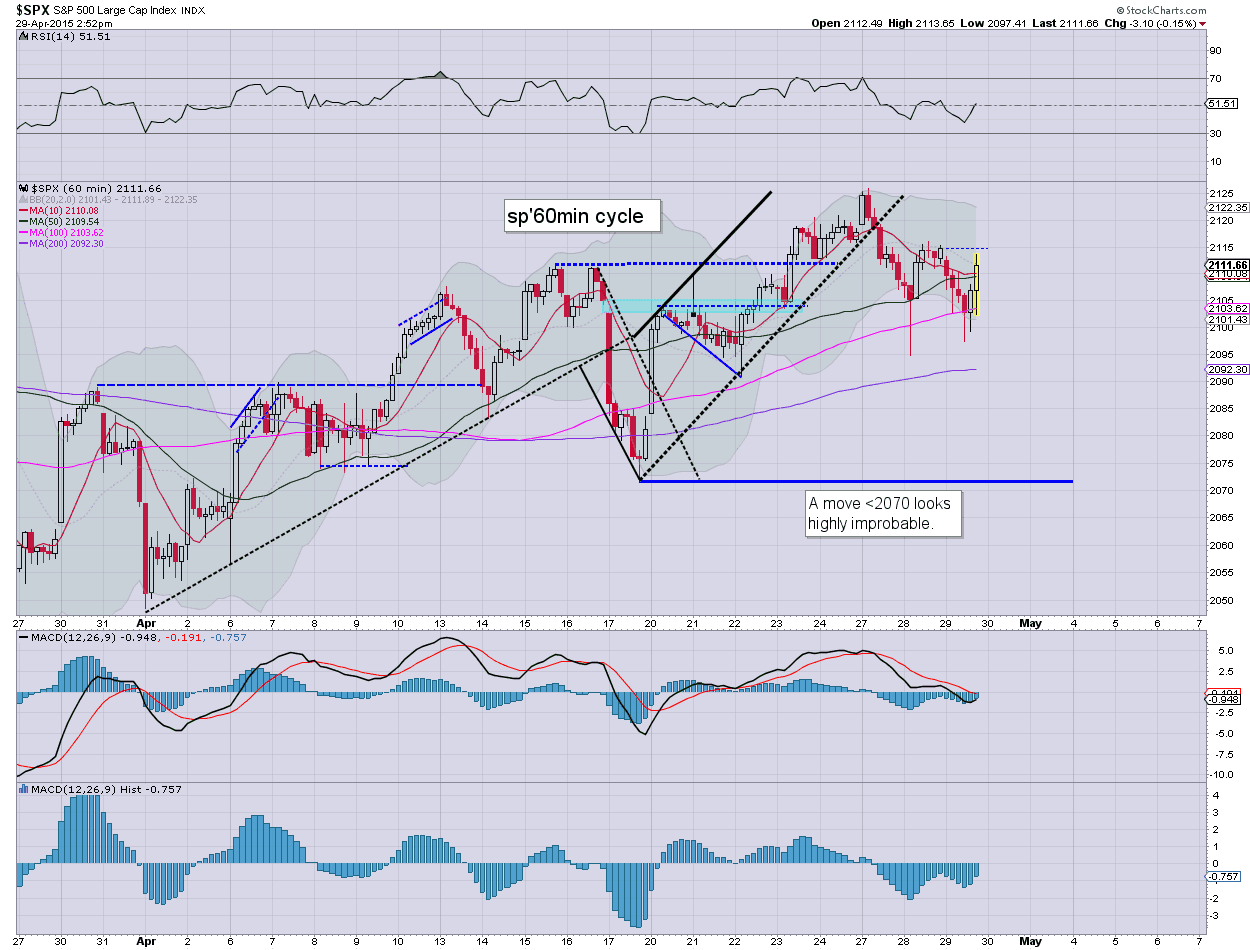 It would seem the USD will claw upward into the close...

Notable hyper-strength in Salesforce (CRM)... as Bloomberg post a story on a 'possible acquirer'... 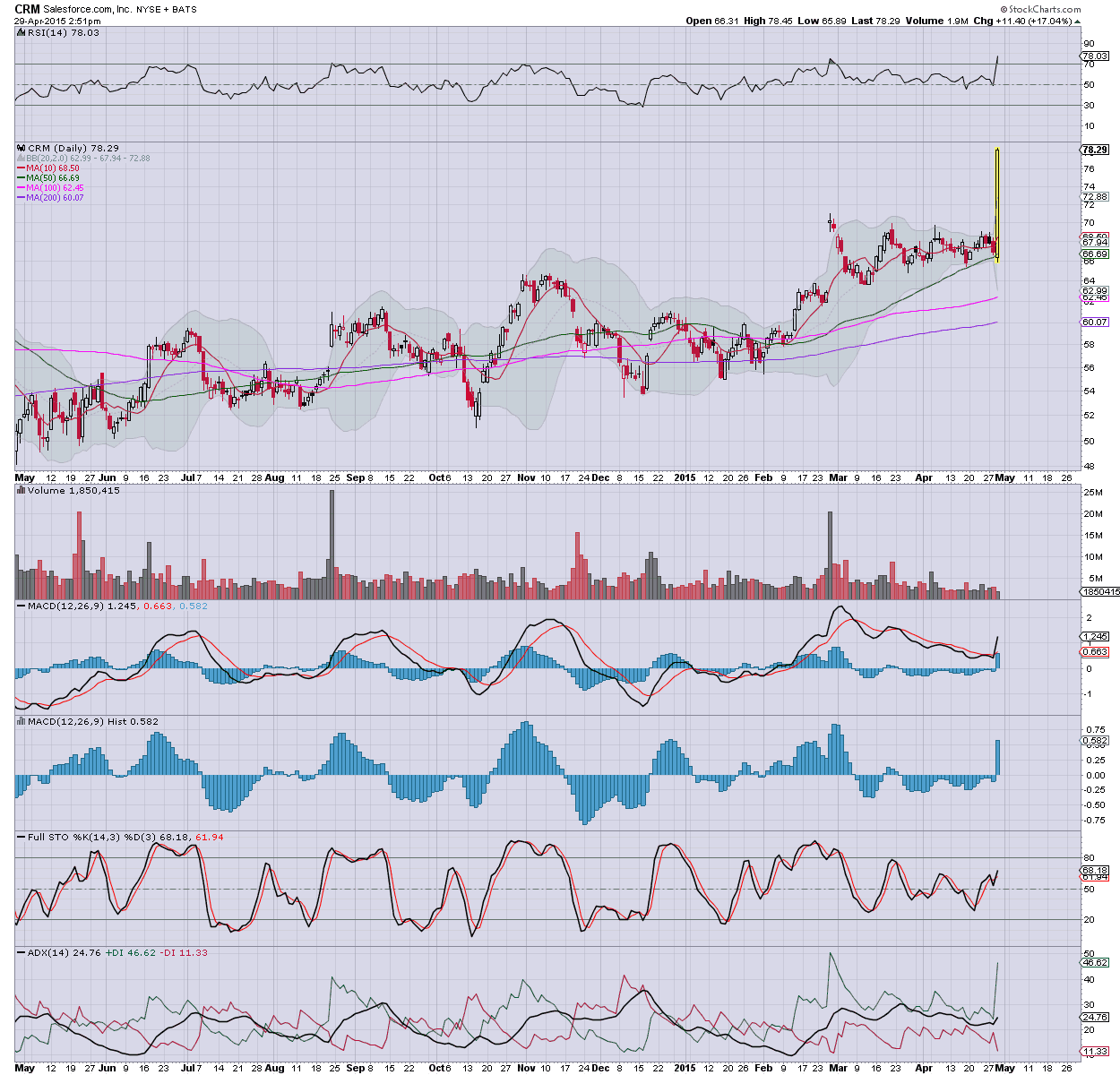 Like the recent instances of TCK and DISCA (amongst others)... I would not be surprised to see CRM refute the story.. for the stock to collapse AH or early tomorrow.

Risky situation.... for those still long.. and holding overnight.
-


3.18pm.. Equity chop... but clearly.. no sig' downside right now.. despite the USD holding well above the earlier lows. 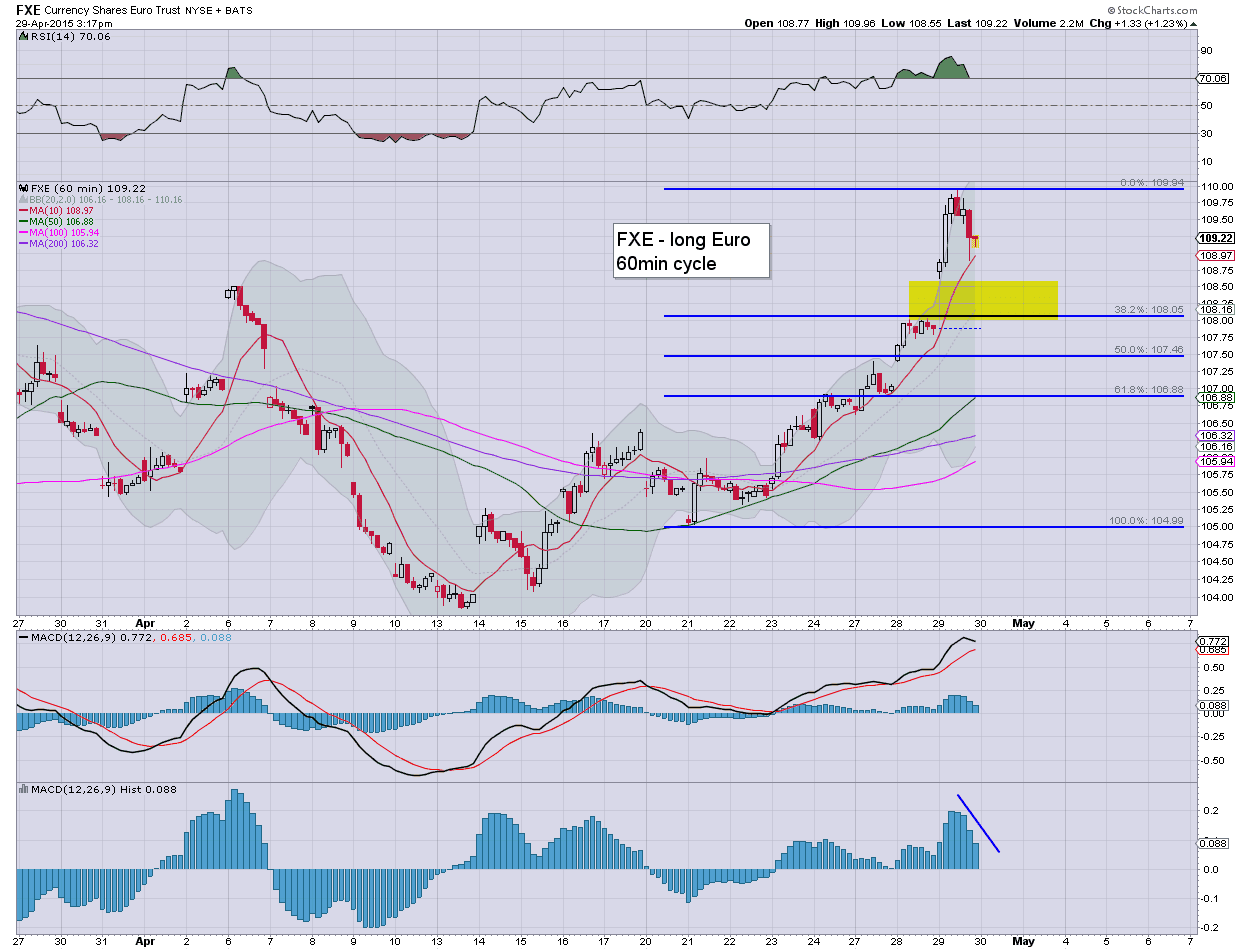 I will have eyes on FXE tomorrow morning... gap zone looks an easy target.. to consider going long. Upside target is 1.17/1.20
Posted by Trading Sunset at 19:52:00
Email ThisBlogThis!Share to TwitterShare to FacebookShare to Pinterest

The latest FOMC announcement is due, although no policy change/rate hike is now likely until September. Equities are already seeing something of a recovery, with a net daily gain viable for all indexes. Oil is starting to cool from the earlier high, as the USD is trying to bounce. 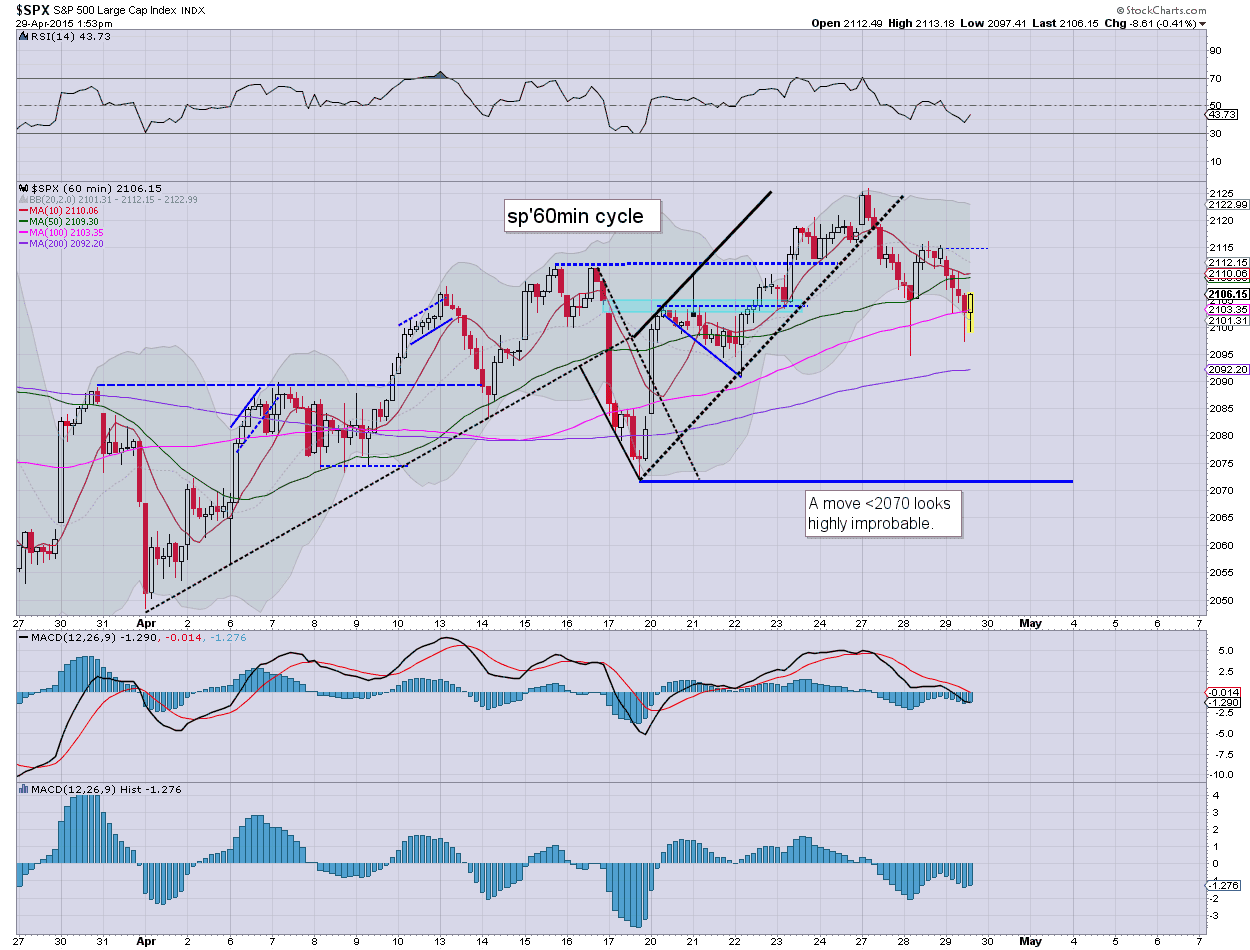 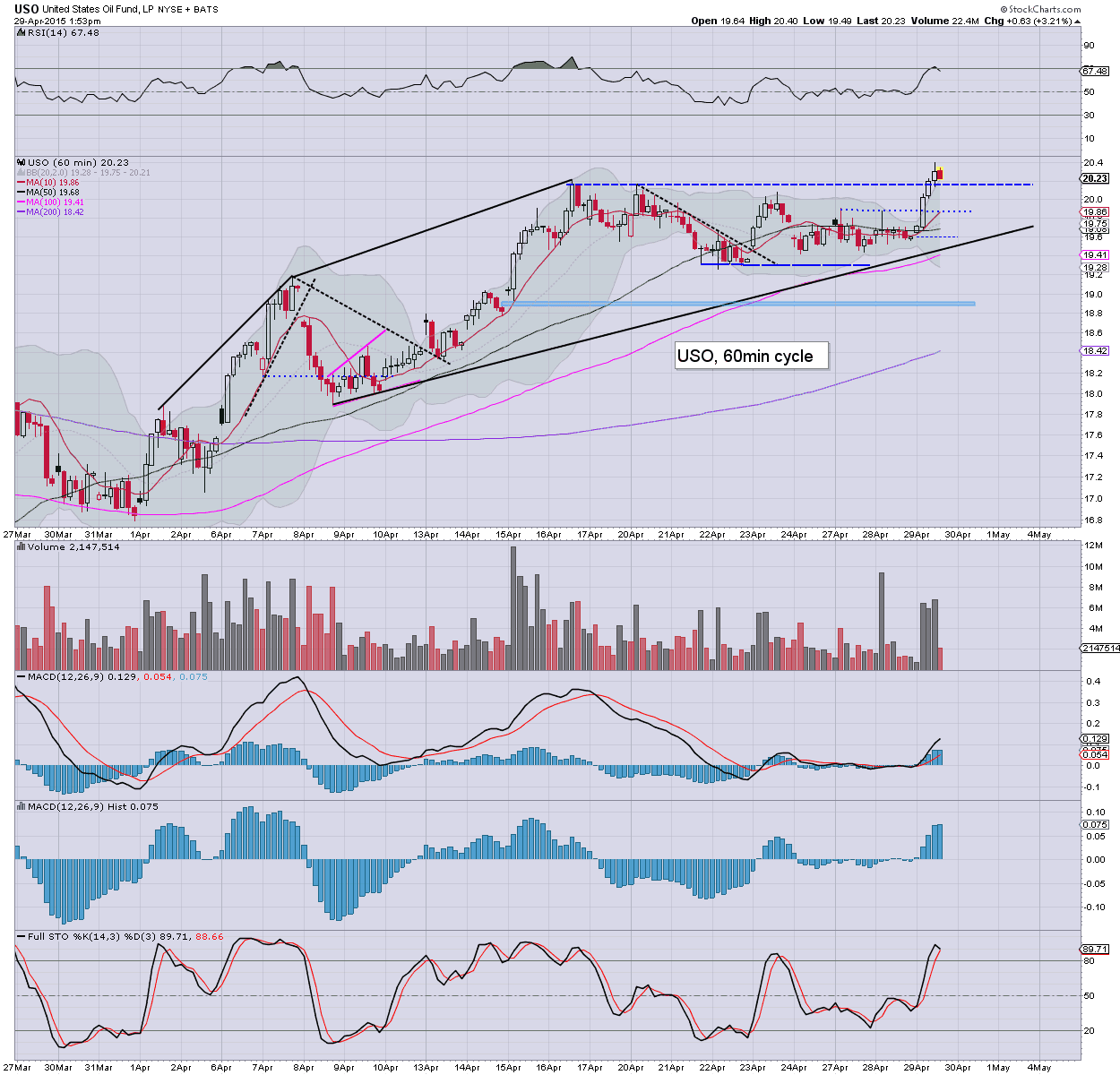 USD jumping up.... putting pressure on everything.. esp' metals/Oil 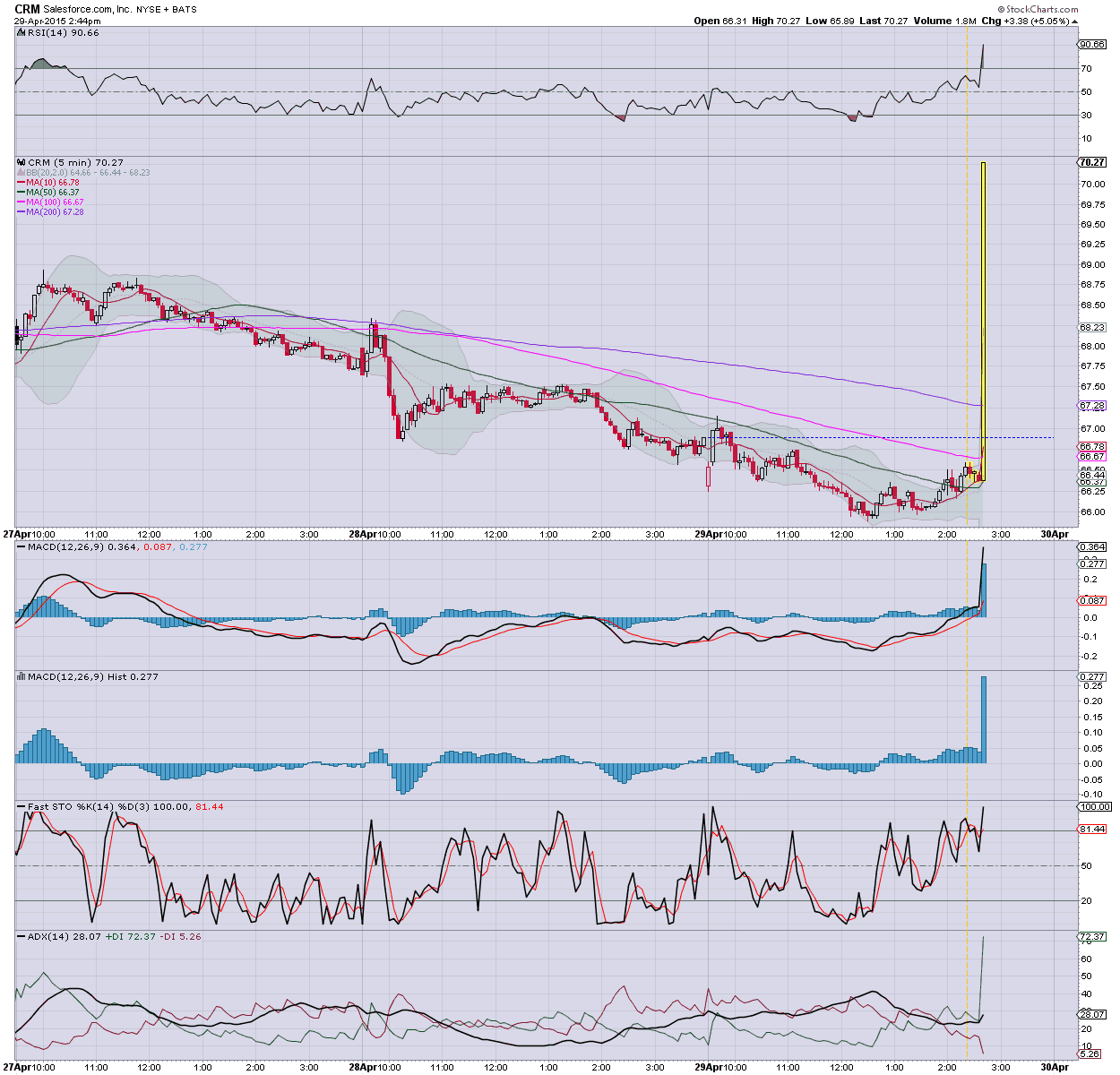 Like TWTR yesterday.. does someone know something? (do they have earnings today?)

.. no.. its not earnings.
Posted by Trading Sunset at 18:53:00
Email ThisBlogThis!Share to TwitterShare to FacebookShare to Pinterest 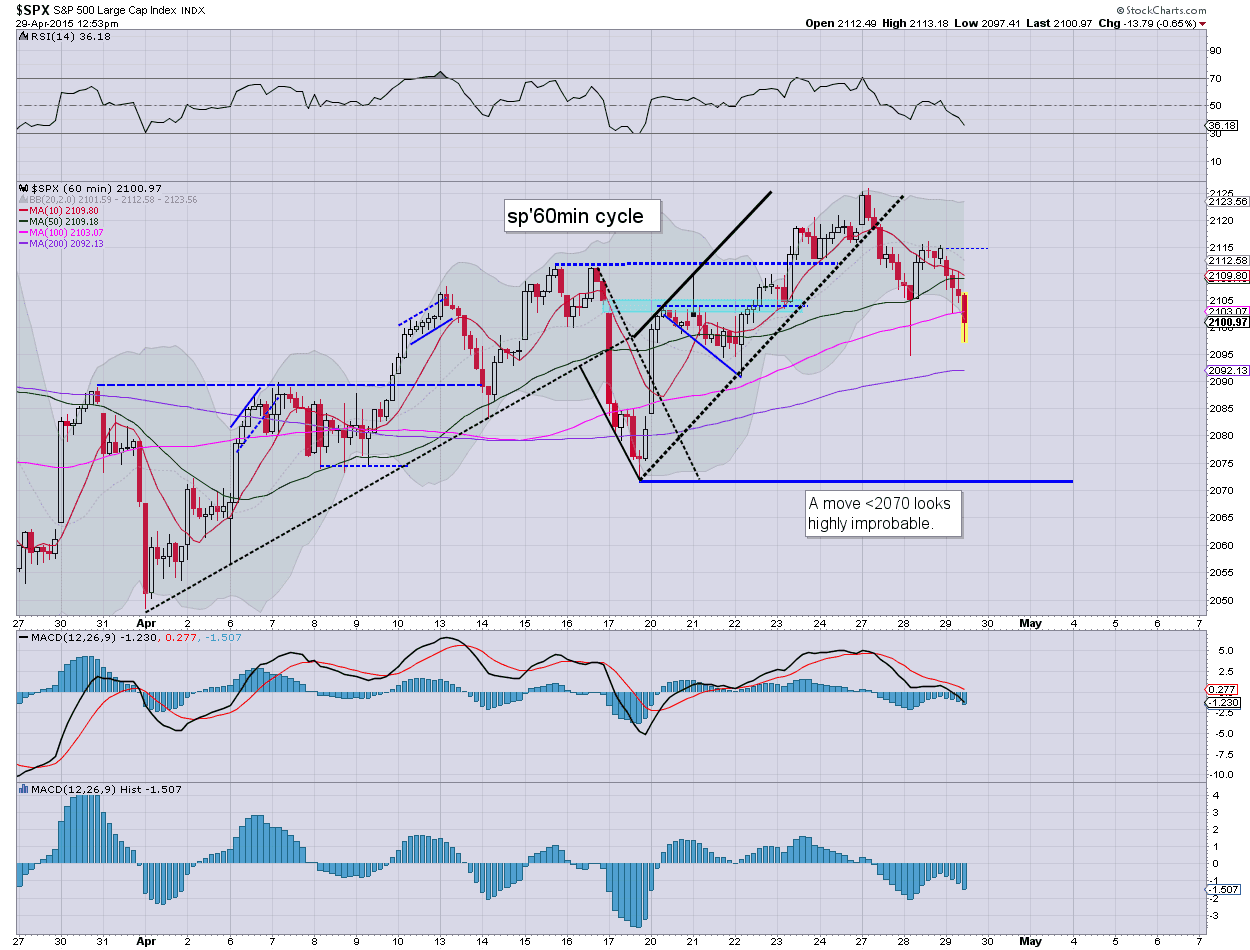 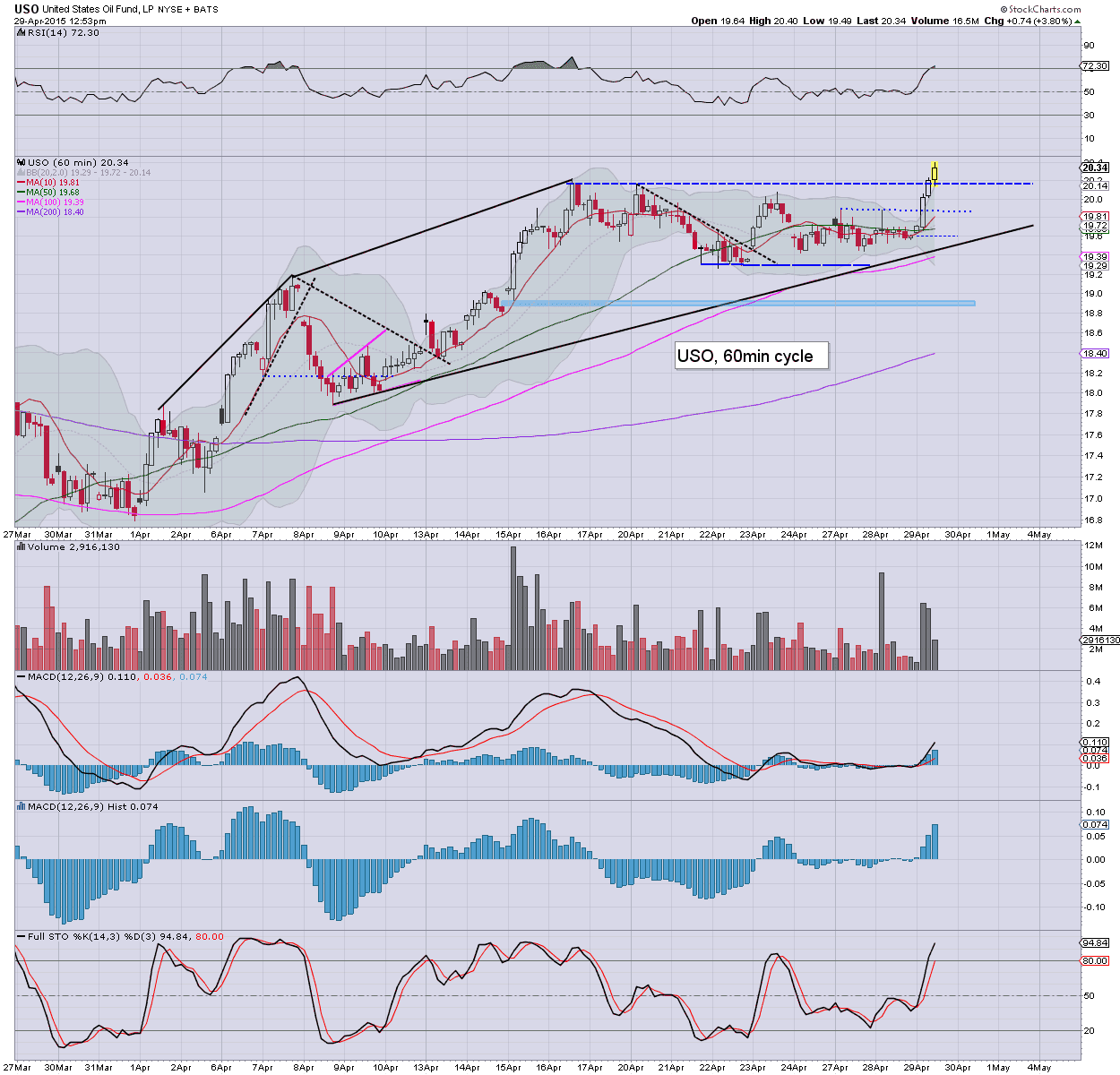 Oil is notably strong, with the latest EIA report pleasing traders that perhaps draw downs are coming in May/June.

FOMC is due at 2pm.... I'd expect some moderate market swings.. but broadly.. we look set to recover higher into the close.

time for lunch :)
Posted by Trading Sunset at 17:58:00
Email ThisBlogThis!Share to TwitterShare to FacebookShare to Pinterest

US equities have naturally slipped into a holding pattern ahead of the FOMC announcement (due 2pm). Most indexes look set to resume higher after the latest Fedspeak. USD remains broadly weak, -1.2% in the DXY 94.80s. Metals are a touch weak, Gold -$3. Oil is building sig' gains of 3.0%. 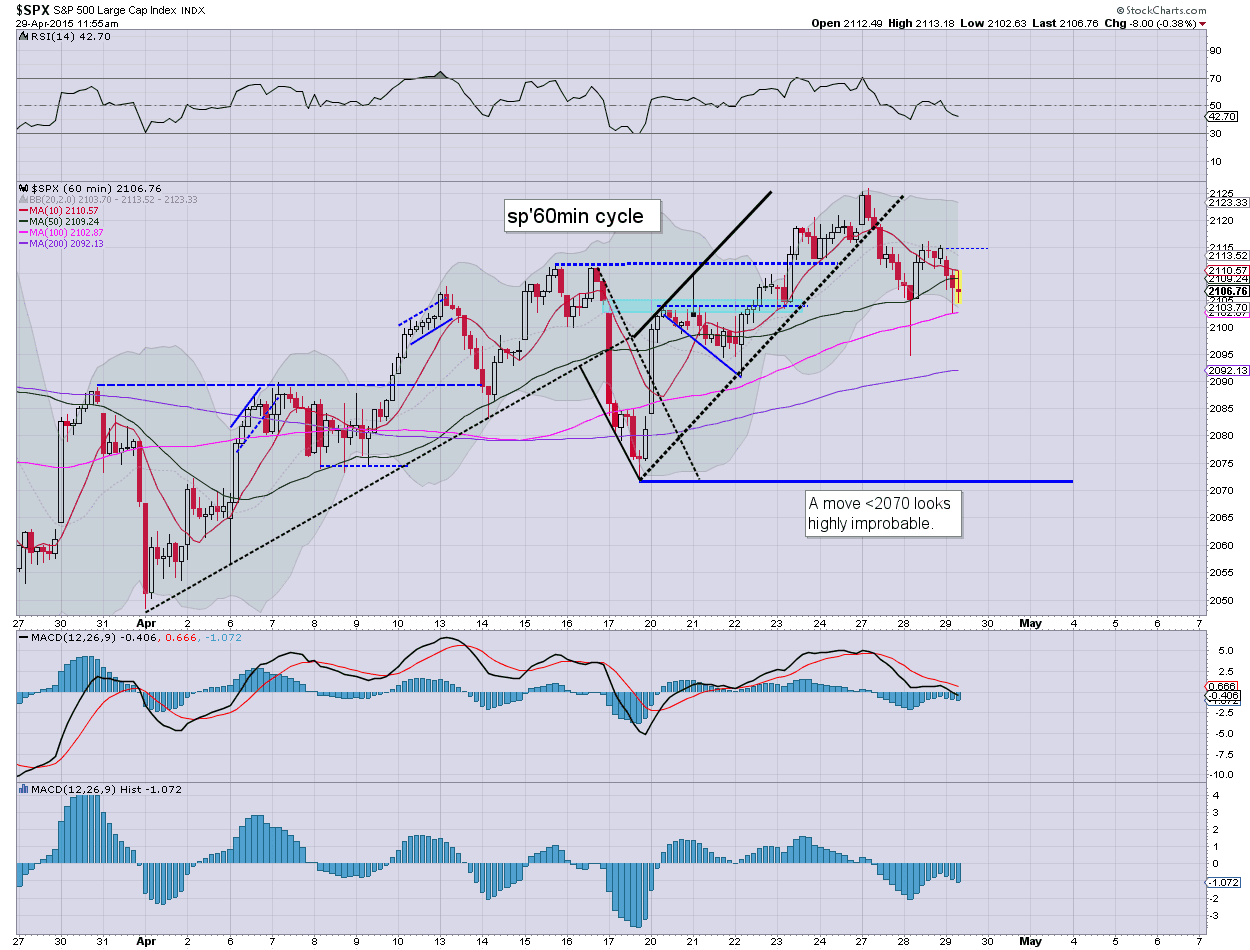 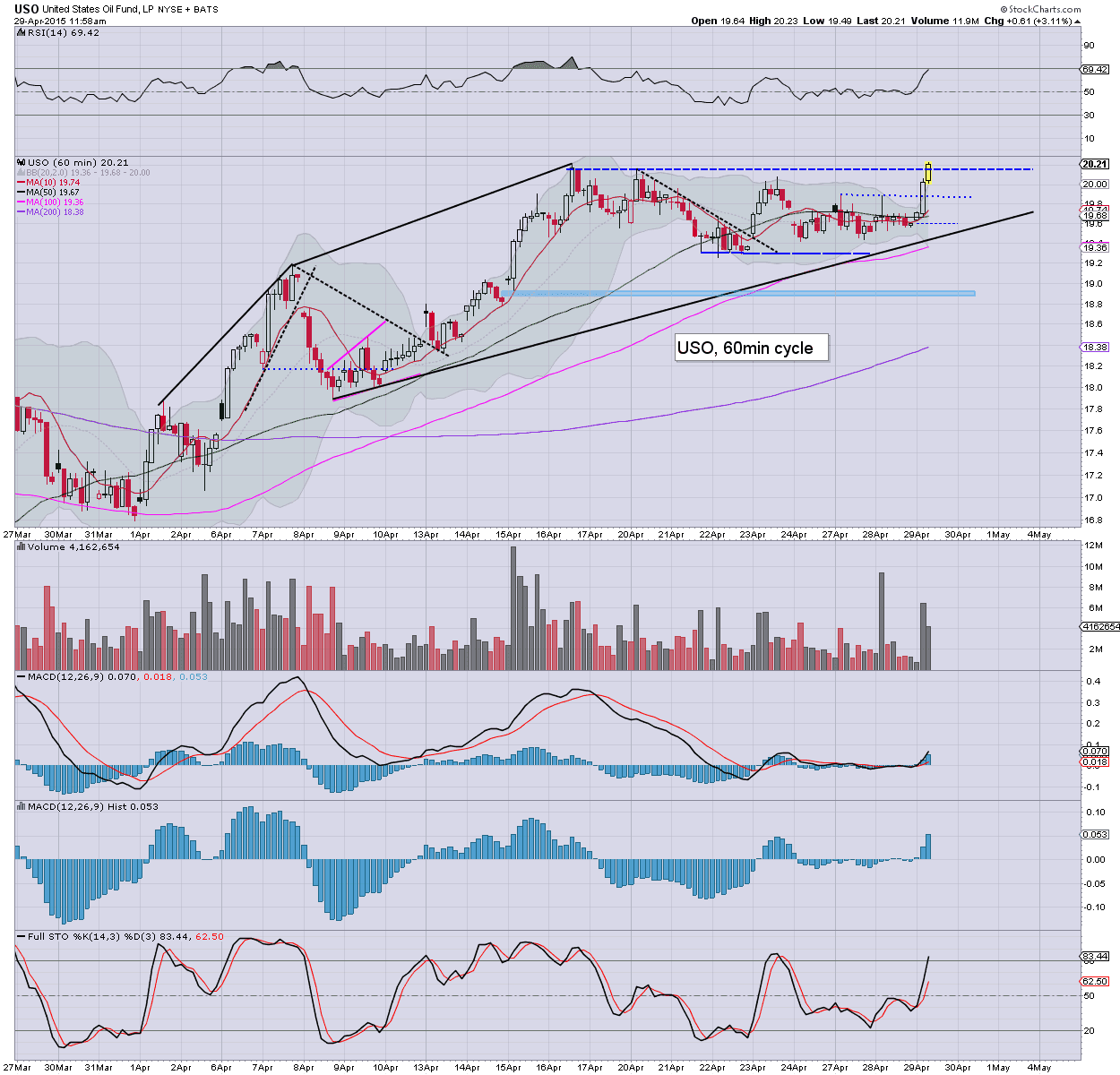 *I exited USO-long an hour ago... very content with the exit. Will consider going long on any sig' pull back.
--

Regardless of any initial down wave... I'd still expect market to claw somewhat higher into the close.

--
time to cook
Posted by Trading Sunset at 16:59:00
Email ThisBlogThis!Share to TwitterShare to FacebookShare to Pinterest

11am update - USD continues to unravel

Whilst equities continue to see moderate weakness (but liable to turn positive this afternoon), there is notable sig' weakness in the USD, -1.0% in the DXY 95.10s (intra low 94.88). First target zone of 93/92s is clearly probable by mid May. 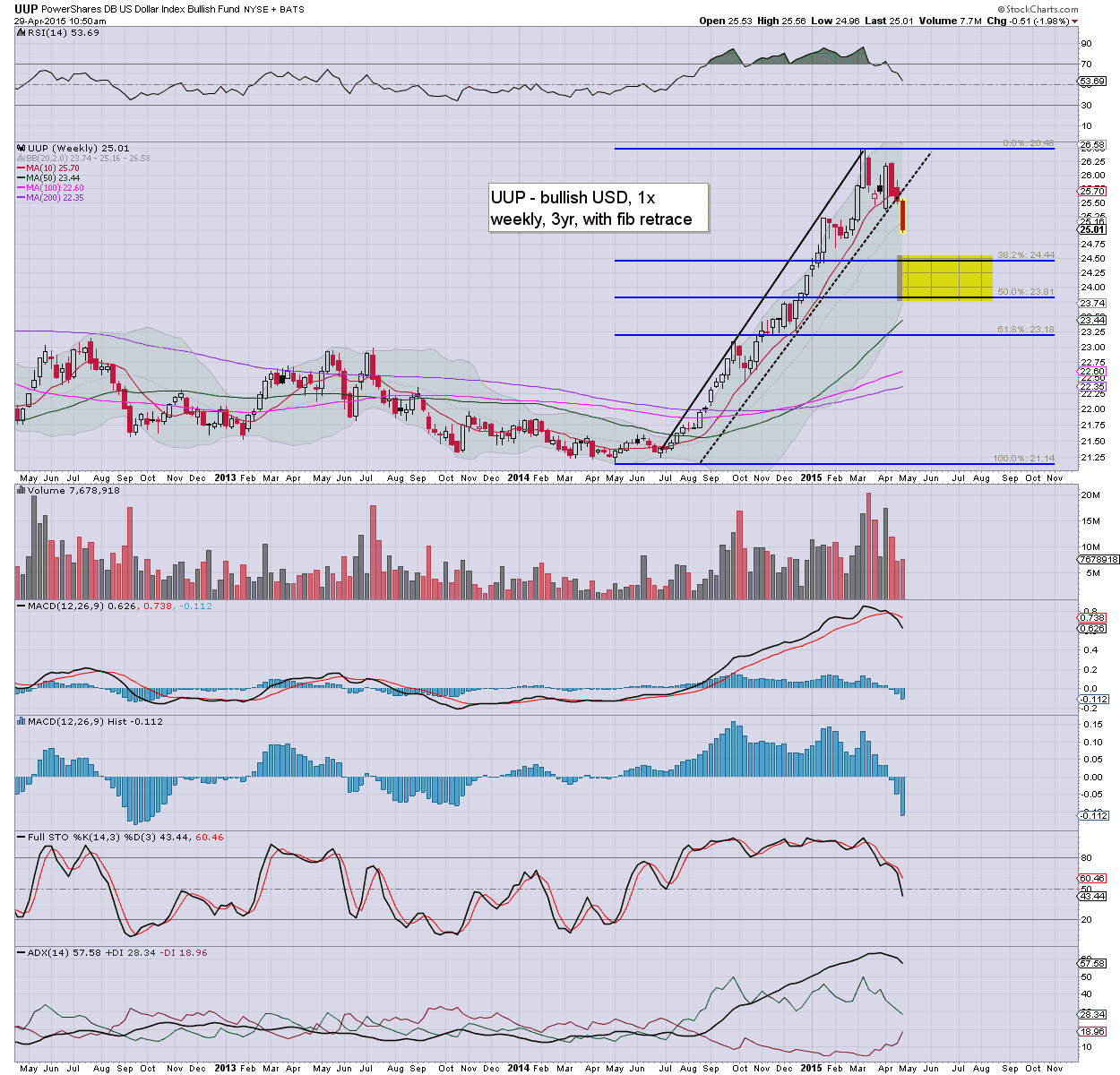 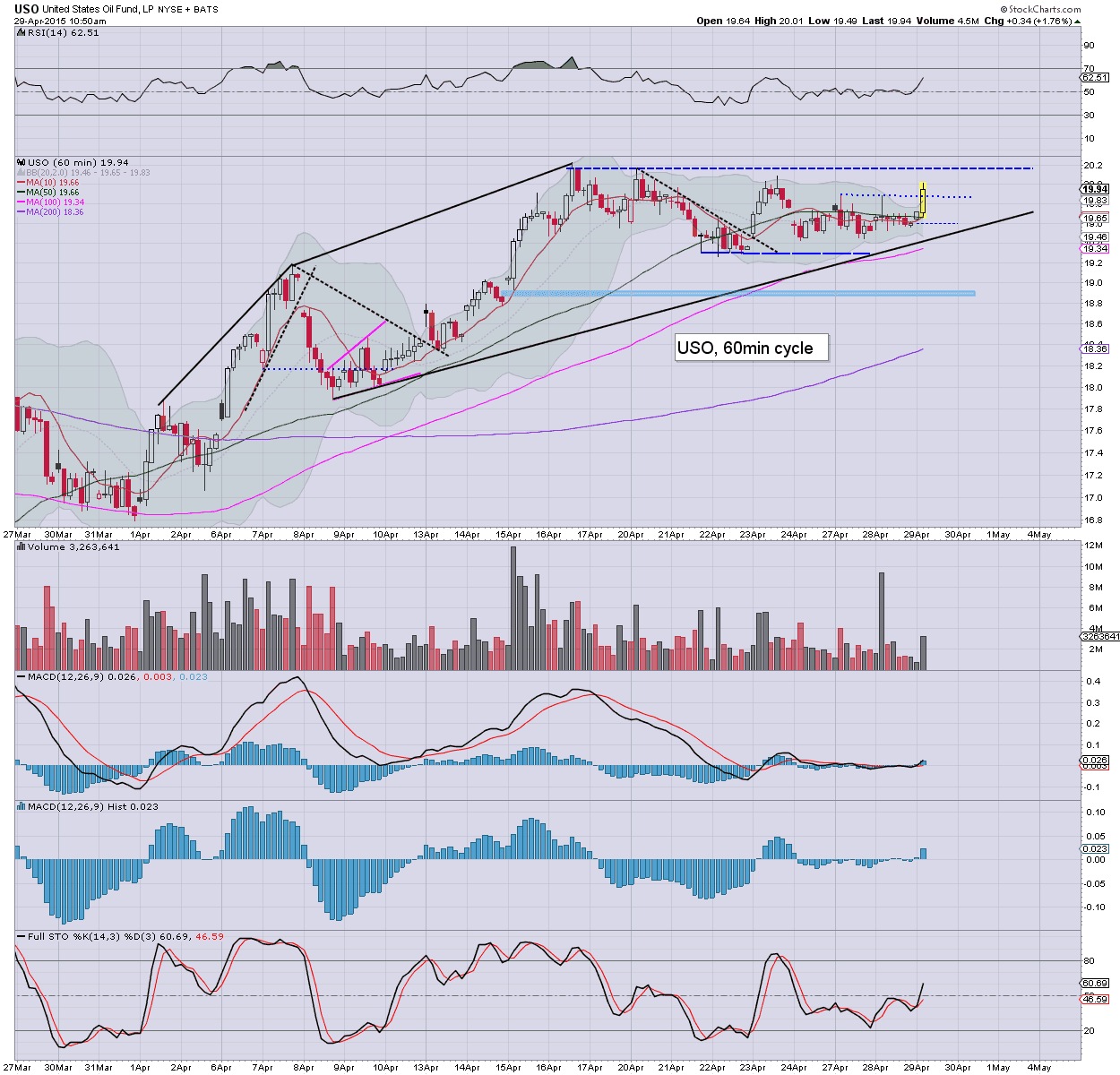 *I will continue to use UUP as a way to highlight USD, since stockcharts don't offer intraday charts on the DXY.
--

If the USD can floor in June/July..... it would help make for a natural equity.. and Oil cycle top.

--
*I remain long Oil via USO... I am trying to give it some time to build gains before my next exit.

Again its a case of a moderately weak open, with no real downside power, a latter day recovery looks due. The market is set to enter a holding pattern until the FOMC announcement of 2pm. Metals are a little weak, Gold -$4. Oil is +0.3% ahead of the latest EIA report. 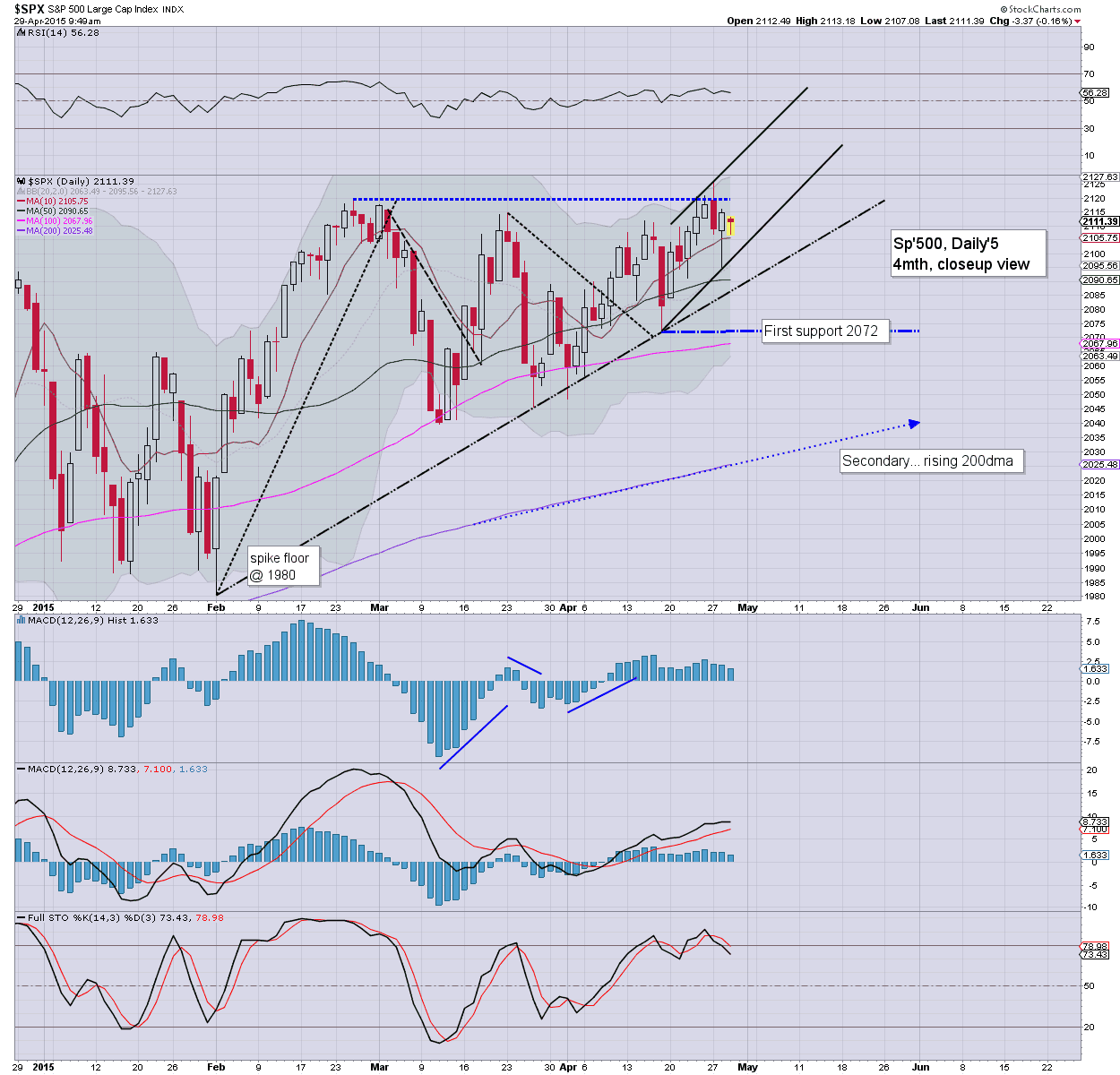 A very disappointing open for those in bear land. Lousy GDP data... pre-market weakness of sp-13pts.... only to open -6pts.. and already in danger of turning positive!

Whether you want to blame the central banks, stock buy backs, or just plain crazy 'momo chasers',... this is no market for the bears.

-
notable weakness.... the hysteria stock that is TWTR... 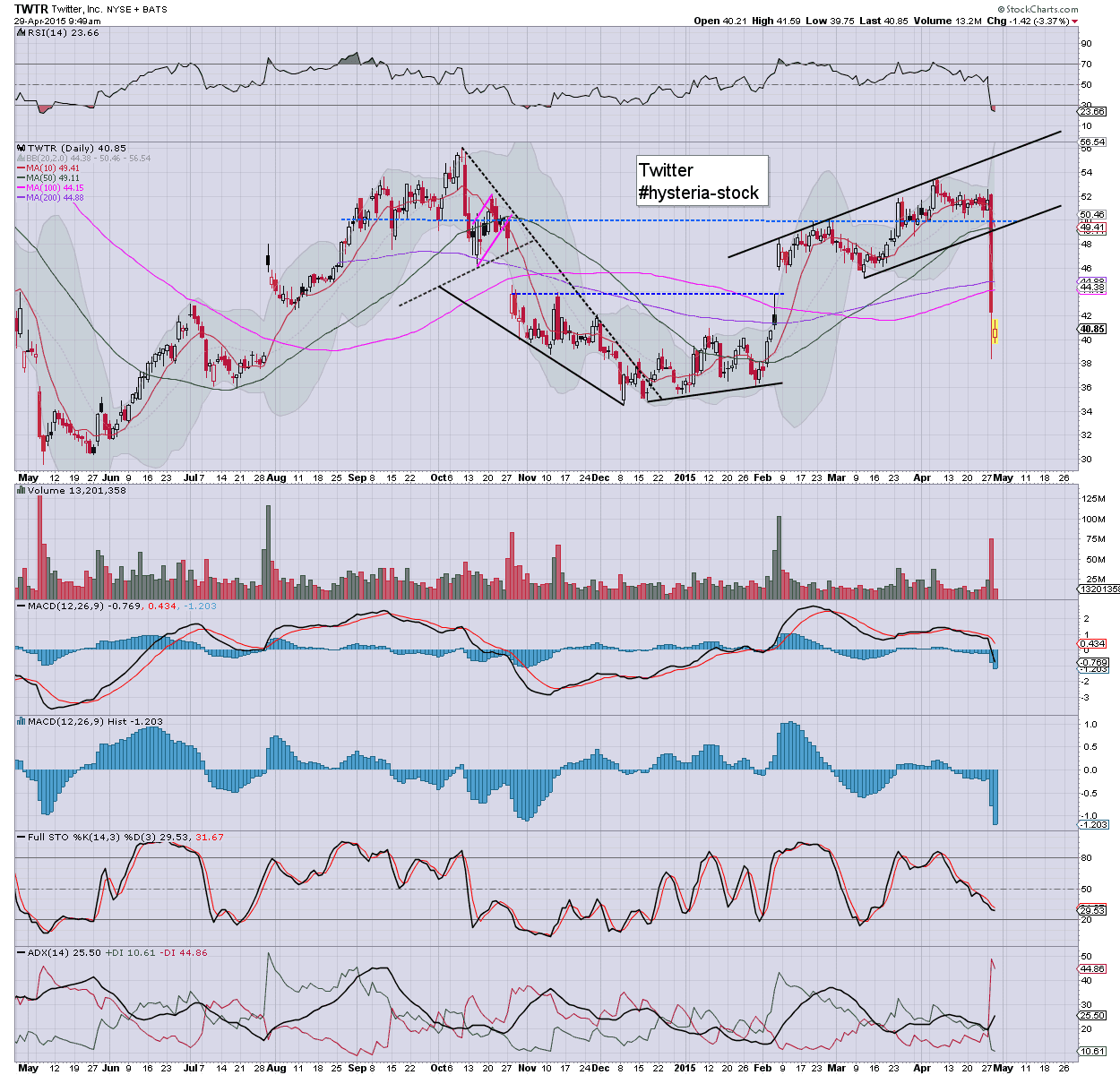 An opening reversal candle.... but TWTR has a long day ahead... with the CEO to appear on clown finance TV in the 11am hour.

Market still seems more rattled by the early release of earnings, than the usual lousy earnings/outlook.

For now... I'm not getting involved in the TWTR nonsense.... but it remains a great deal of free entertainment.
-

It remains notable that we're still well above yesterdays' low of sp'2094.

Oil climbing... +2.1%
Posted by Trading Sunset at 14:51:00
Email ThisBlogThis!Share to TwitterShare to FacebookShare to Pinterest 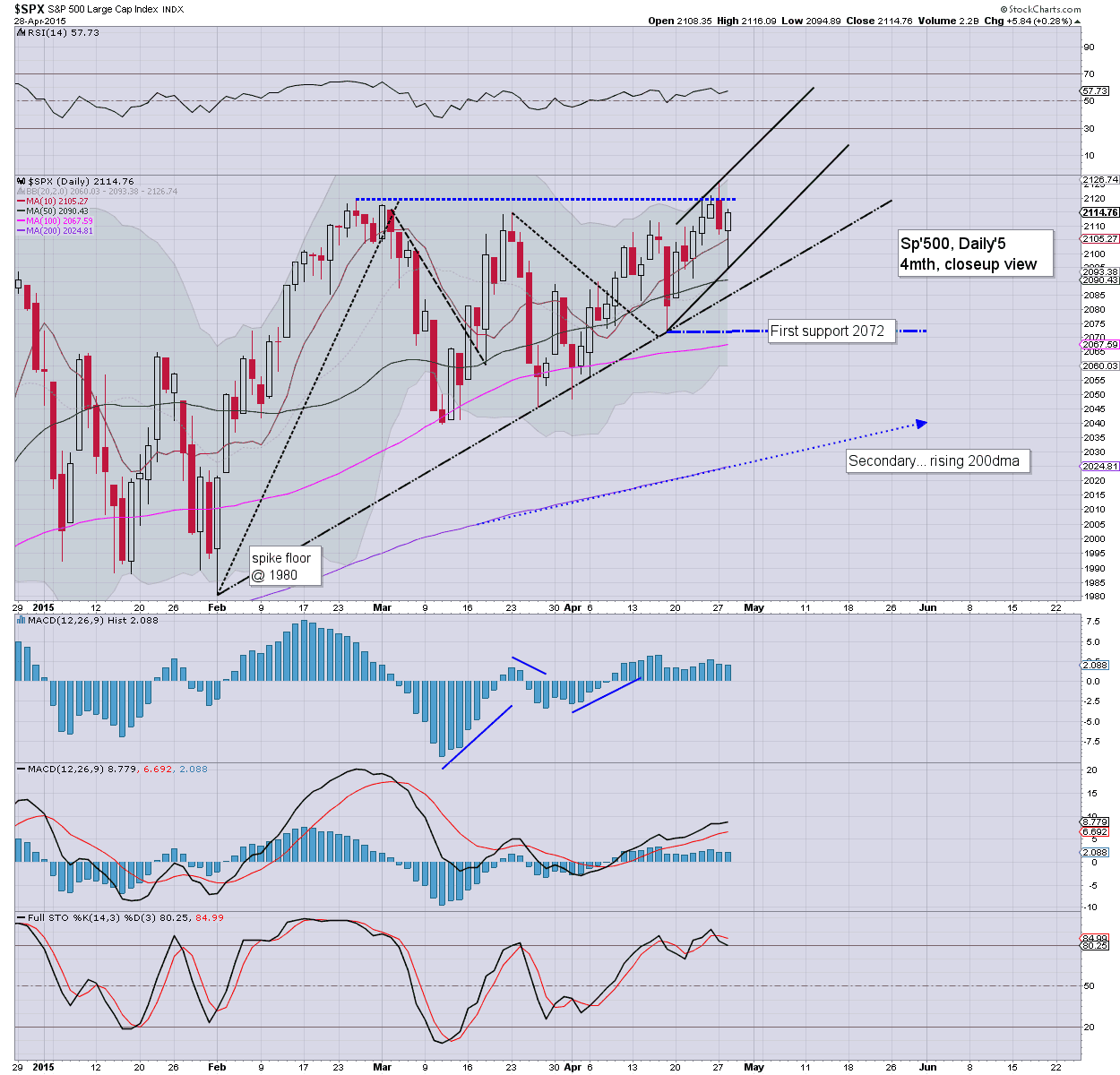 Lousy number... no question about it.

... now its a case of what the FOMC statement is.... I'm guessing the market will manage to still broadly climb.

We've not forgotten about Greece, or the other EU PIIGS have we?


9.04am.. watching clown finance TV.... Cramer looking a bit bashed up after his beloved TWTR is smacked lower by 20%... 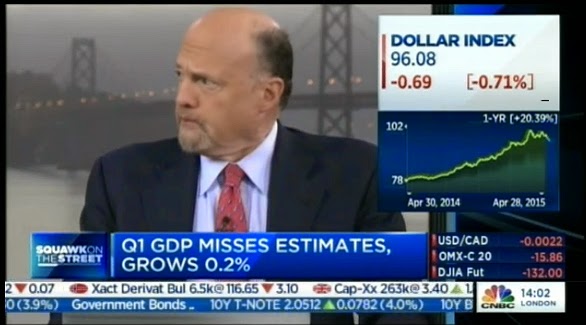 Re: TWTR early release of results '... this was trolling.... it was a glitch in the system... its not Twitters fault'

In any case... the market is awaiting the FOMC.. although that won't see any actual changes... will it ?

The underlying issue.. as with all things... one of 'fair value'.... and before items.. TWTR actually saw a Q1 loss of 25 cents.. rather than the 7 cents headline number.


9.37am.. sp -6pts... which is a pretty lame open for the bears.
Posted by Trading Sunset at 13:20:00
Email ThisBlogThis!Share to TwitterShare to FacebookShare to Pinterest

Another down day for the USD 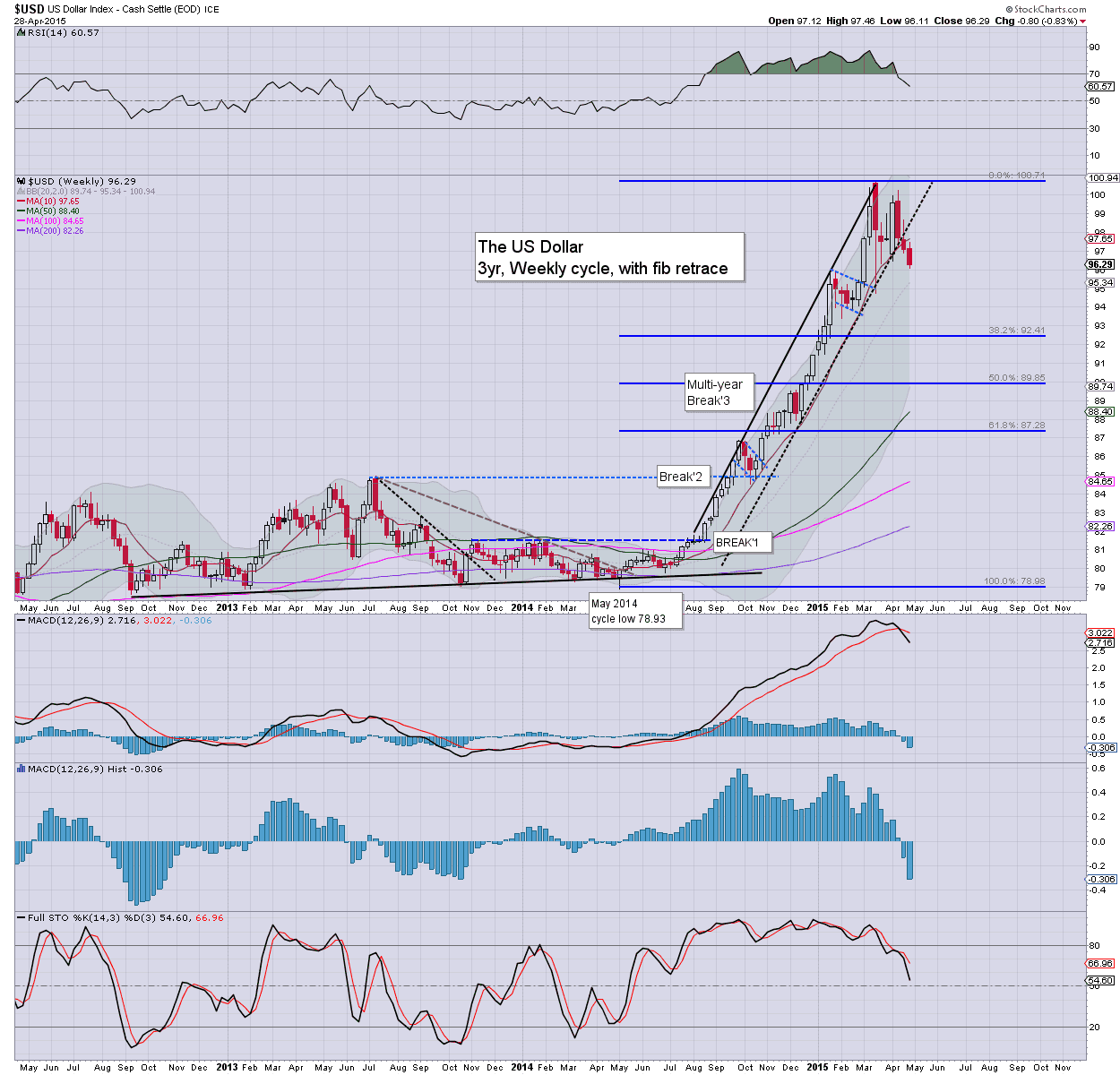 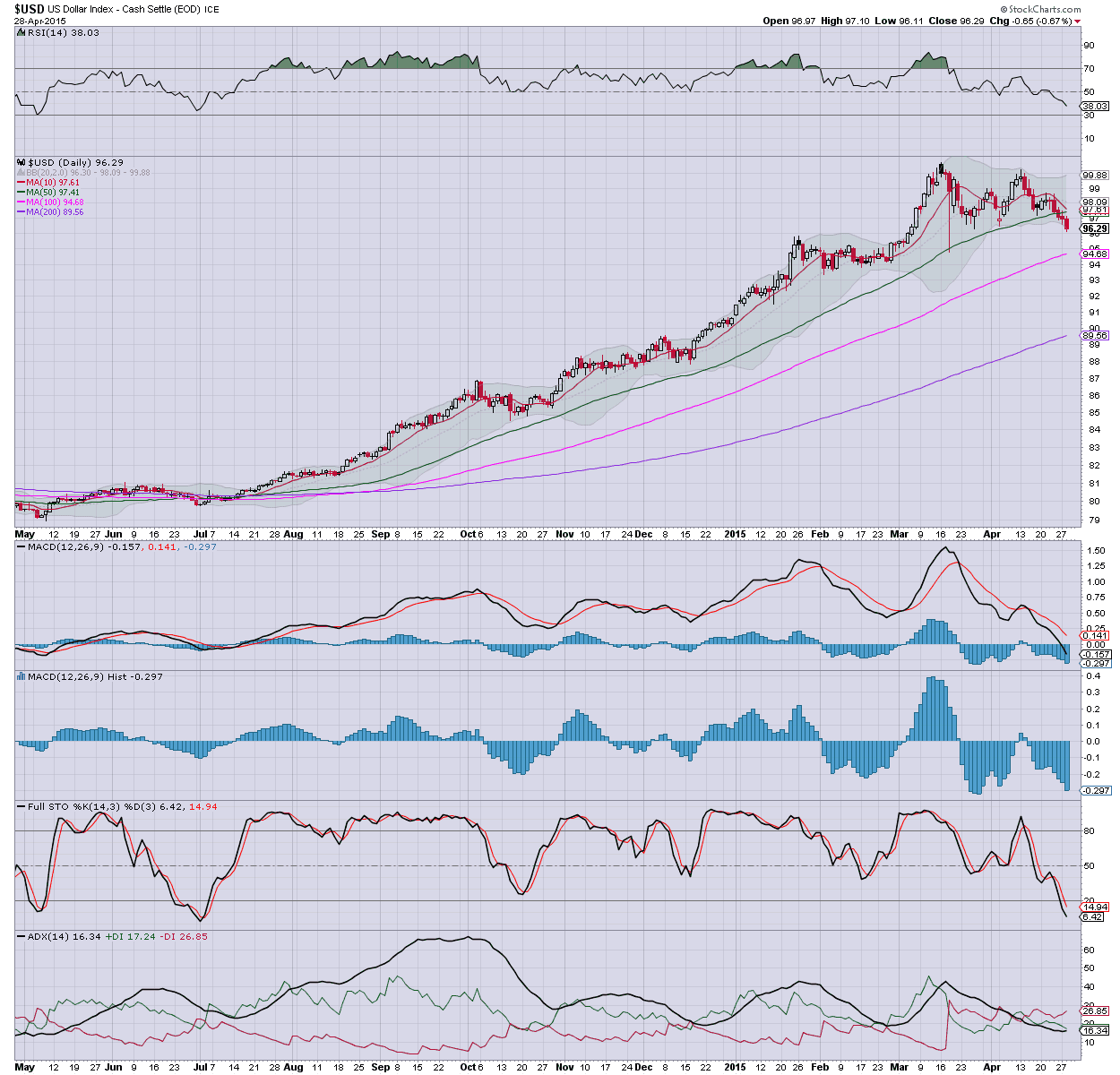 Suffice to say.. the fifth consecutive net daily decline, and the DXY 95s are already close. The first target zone of 93/92s looks easy to hit within the next 2-3 weeks.

A retrace... and then a hyper-ramp 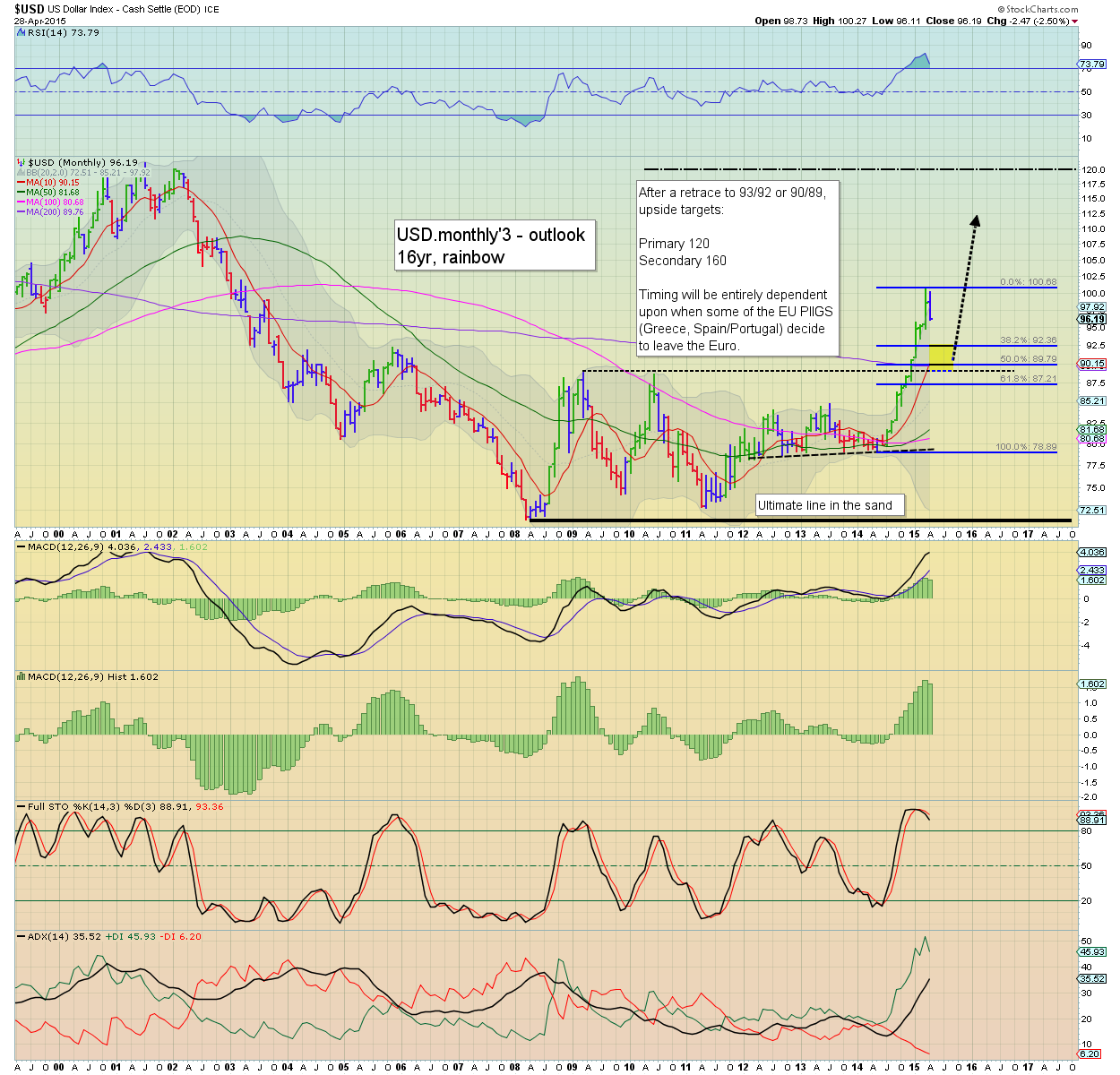 The above chart should clarify what I am seeking in the mid term. Under no outlook do I see sustained trading under the old breakout level of 90/89.

After all, do you really think the Euro/Yen are not going to devalue faster than the USD? Then there is the issue of huge capital inflows to the USA... increasing the upward pressure.
-

*I am looking to be long the USD (via long equity positions, but also UUP long dated option calls).. this summer. I will be seeking an entry in the 90/89 zone... which looks just about possible in June.. before the first realistic opportunity of renewed upside.
--

Wednesday will be pretty important, with Pending home sales and the latest EIA report. However there is also the first reading for Q1 GDP. Market is expecting 1.0% growth, vs the Q4 of 2.2%.

Further.. we have the latest FOMC announcement (due 2pm). No change in policy is likely. There will NOT be a post Yellen press conf.
--

US equity indexes closed moderately mixed, sp +5pts @ 2114 (intra low 2094). The two leaders - Trans/R2K, settled u/c and +0.5% respectively. Near term outlook remains bullish, with new historic highs due for all indexes. The VIX continues to reflect a market that has virtually no concern of anything. 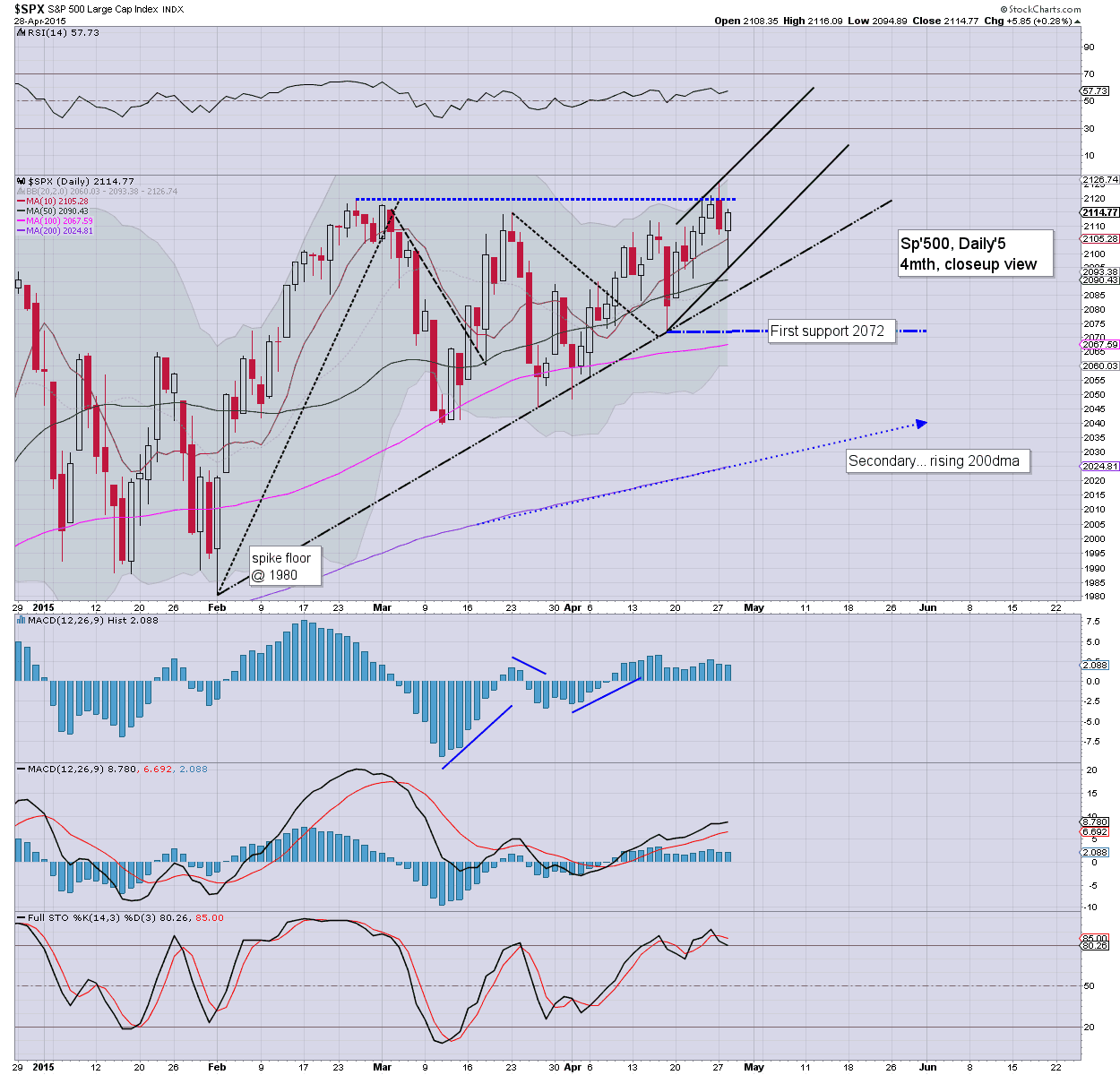 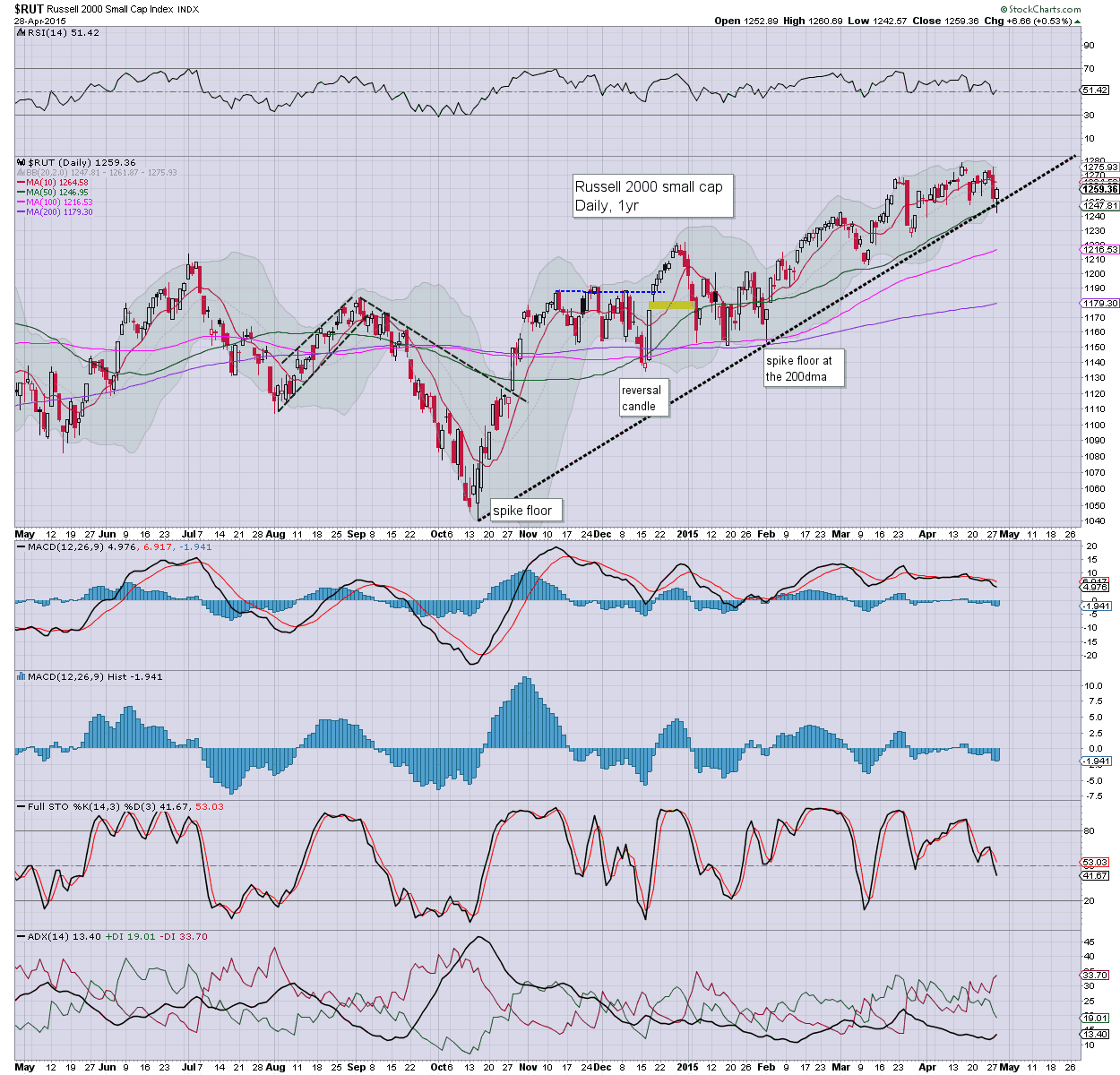 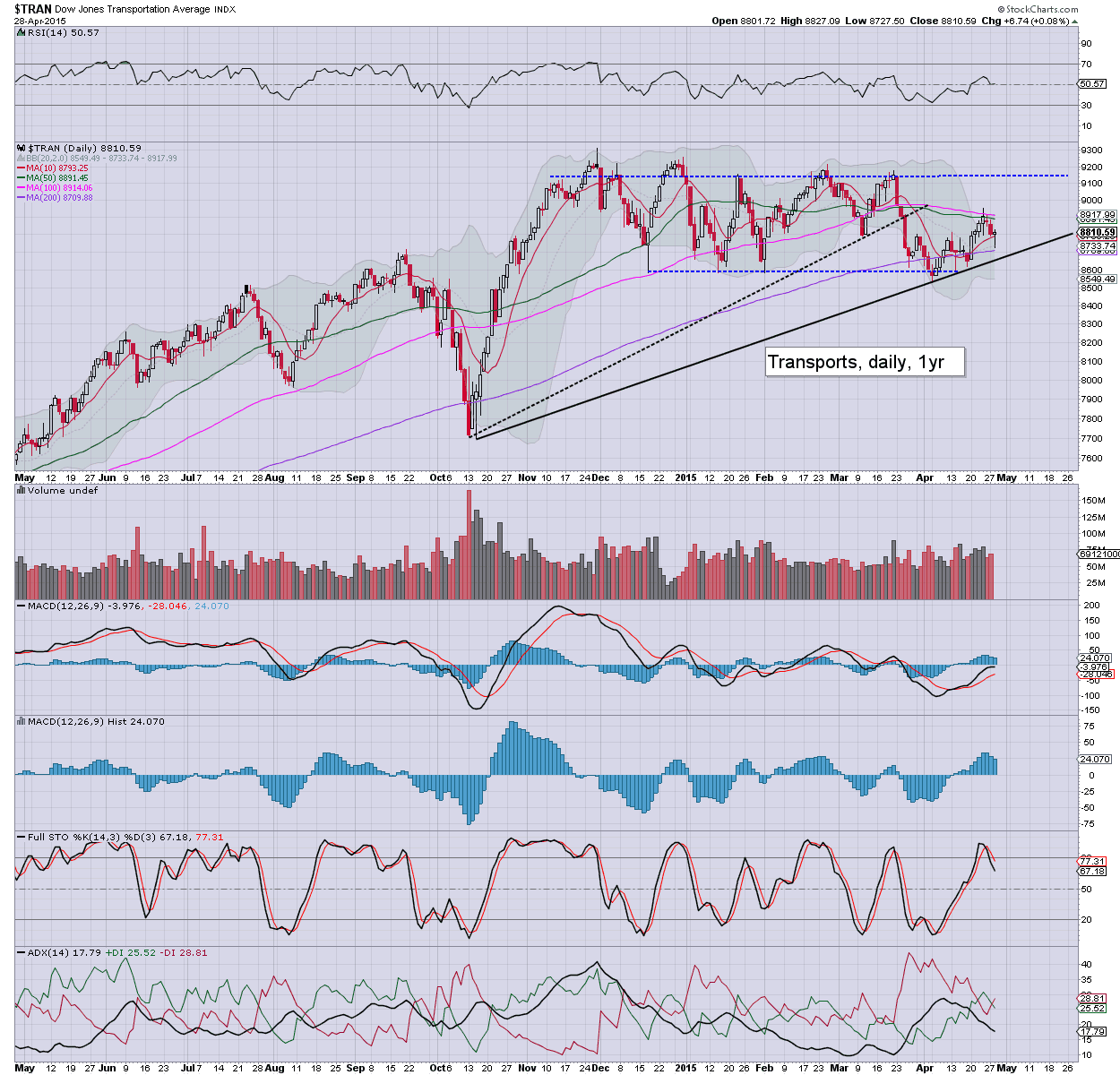 *a notable break of trend on the R2K, but the daily closing candle was somewhat bullish, offering a spike floor of 1242.
--

Not much to add. Most indexes merely saw a minor down cycle, but held within their broader upward trends. Only the R2K showed any significant downside.. but managed a relatively impressive net gain of 0.5%.