Volatility kicked lower into the weekend 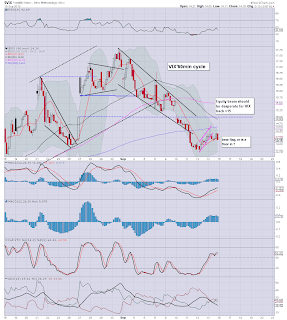 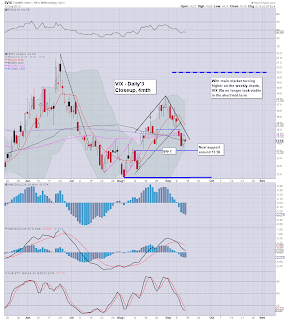 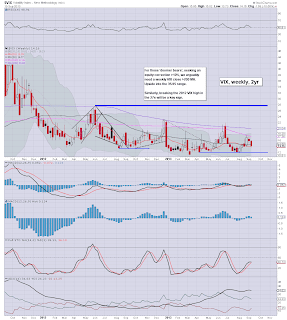 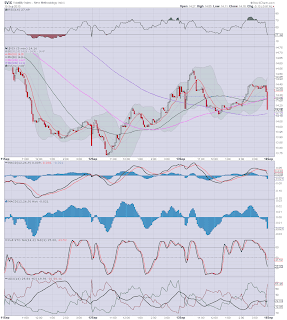 --
With the VIX falling over 10% this week, the equity bears have indeed failed again.

I was long-VIX starting this week, but the bears failed from the Monday open. It would seem the market has not only filled both downside gaps in the 1680/50s, but that it will now keep rallying into October..perhaps even all the way into spring 2014.

There seems little point in considering a long-VIX trade for some weeks at least.
-

A quiet end to the week, with the main equity indexes all closing moderately higher. Across the week, the sp gained almost 2%. Precious metals recovered after earlier declines of -$13, Gold closed +$2. Oil closed flat, with the VIX a touch lower in the low 14s. 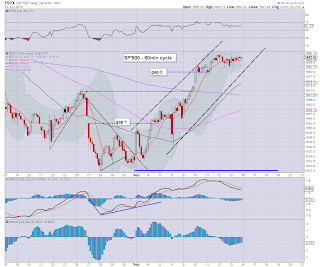 *a stupid micro hyper-jump into the close..and yes..they whacked the VIX lower into the weekend..as usual.
--

There really isn't much to say. Bears showed the first sign of failure last week, with a closing weekly blue 'rainbow' candle. The closing green candle this week..confirms the failure..and sets up sp'1700s next week...

I realise many of you out there don't want to hear any 'we're going up' talk..not least from a self titled 'permabear', but hey..thats how I see it.

*I hold LONG the indexes..across the weekend.
--
The usual bits and pieces across the evening

Have a restful weekend.

--
*next main post. late Saturday, probably on the World monthly indexes
Posted by Trading Sunset at 21:03:00
Email ThisBlogThis!Share to TwitterShare to FacebookShare to Pinterest

3pm update - melt into the weekend

The smaller 5/15/60 minute index cycles are all offering moderate upside into the Friday close. The sp'1690s remain viable, not least with such quiet trading conditions. Metals are weak, with Gold -$9.  VIX is +0.6%, but more than likely, will get whacked lower into the weekly close. 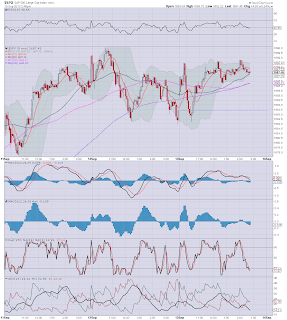 A mere 6pt trading range so far today. The 1690s won't be easy, but how many times have we seen the bull maniacs ramp into the close? Ohh, thats right...I refer anyone to the closing 5minutes of Wednesday.
--

Regardless of 1680s..or 90s, market looks set to close with the weekly charts looking strong for next week.

*look for VIX to get whacked lower in the closing few minutes!
Posted by Trading Sunset at 19:54:00
Email ThisBlogThis!Share to TwitterShare to FacebookShare to Pinterest

The main indexes are holding moderate gains, and it won't take much of a push for the bull maniacs to attain a weekly close in the 1690s. Meanwhile, the bigger monthly charts are offering September upside into the 1715/25 zone. 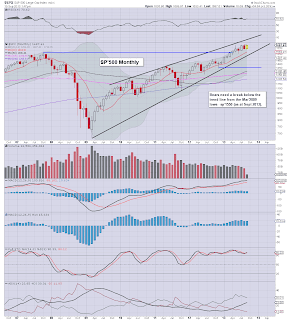 *not much going on...hence I'm throwing out a monthly chart!
--

Certainly, if the market can cope with the FOMC next week, there is now no reason why September will not close somewhere in the 1715/25 zone...which of course would be new historic territory.

I did stray onto clown finance TV earlier, and it was noticeable that they weren't generally that confident in mood.

Although they were all in love with some watch. which cost a million $, but which looked ugly as anything.  Maybe I can find the video on it...

Now thats bullish!
Posted by Trading Sunset at 18:51:00
Email ThisBlogThis!Share to TwitterShare to FacebookShare to Pinterest

The main indexes are holding moderate gains, with absolutely zero downside momentum. A close in the sp'1690s would especially clarify the outlook for next week - at least from a purely chart/technical perspective. VIX is naturally melting lower into the weekend. 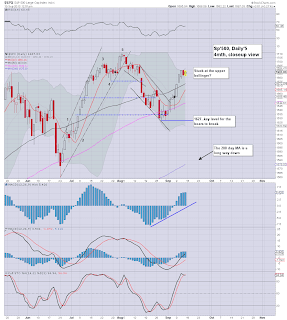 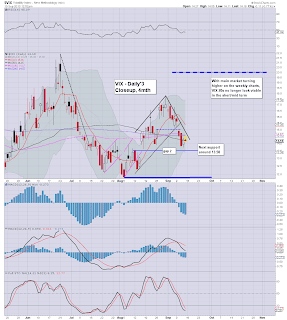 *VIX looks set to close in the 13s, there is usually a late Friday 'whack the VIX lower into the weekend' event..not least when the market is this subdued.
--

Not much to say...quiet day..with rather significant weekly equity gains.

The notion of breaking under the sp'1627 low...seems highly unlikely any time soon.

So, with 3 hrs to go, lets see if the bulls can spike it higher in late afternoon..into those 1690s.
Posted by Trading Sunset at 17:55:00
Email ThisBlogThis!Share to TwitterShare to FacebookShare to Pinterest

It remains a very quiet end to the week in market land. The weekly close looks set to be a very bullish one, and should help to clarify the mid-term picture. If the market can cope with QE taper next week, then the market looks set to climb into October..if not next spring..urghhhhhhh. 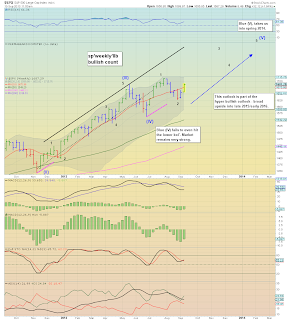 As noted yesterday, bulls just need to keep above the weekly 10MA..currently 1675.  Considering how quiet things are today, that looks pretty easy to achieve.

I sure wish I could be bearish for the autumn, but it would seem the bears had their chance..and once again failed.

As for the wave count on weekly8b, well, count it however you like, but what is clear, the broader trend sure isn't down!
- 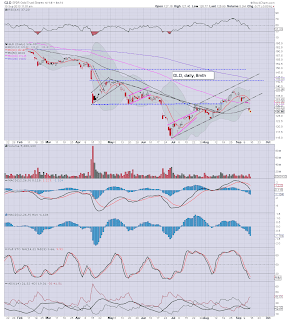 time for lunch
Posted by Trading Sunset at 16:52:00
Email ThisBlogThis!Share to TwitterShare to FacebookShare to Pinterest

11am update - no sell side volume

The main indexes are effectively flat, with the sp' holding the mid 1680s. The metals are a little lower, certainly..no major bounce to recover any of the Thursday big drop. VIX is flat, with the usual 'melt lower into the weekend' looking likely this afternoon. 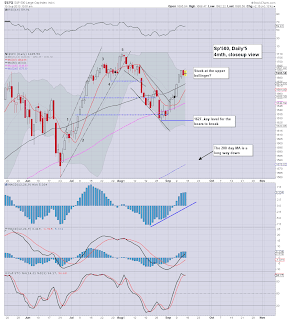 A dull end to the week. Frankly, there is nothing due now until next Wednesday.

Market should hold the 1680s into the Friday close, and if that is the case, then the weekly index charts will remain outright bullish, with likely upside for at least a few weeks. 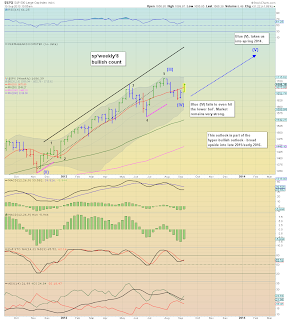 yours
trying to stay awake
Posted by Trading Sunset at 15:57:00
Email ThisBlogThis!Share to TwitterShare to FacebookShare to Pinterest

The main indexes are moderately higher, but the market is looking tired after strong gains earlier in the week. What is clear, bears remain largely powerless, ahead of next Wednesday's FOMC. VIX is largely flat, but looks set to melt lower into the weekend. 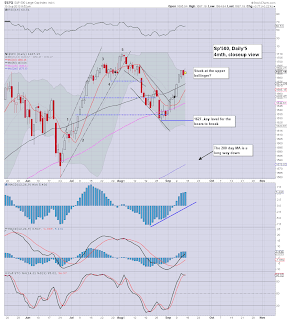 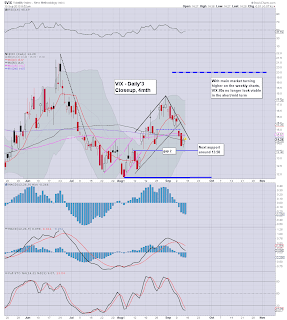 With QE of 3-4bn..market should hold together. The only unknown is whether the bulls can manage to break and close in the sp'1690s. If that is the case, the low 1700s look a given early next week.
-

I see a fair few suggesting a near term pull back to the 1660/50s, but that would wreck the weekly charts.

It looks like the past few two days are simply consolidation before another up wave.
-

yours...
not a 'Journalist'.. according to the US Senate. see Breitbart
Posted by Trading Sunset at 14:57:00
Email ThisBlogThis!Share to TwitterShare to FacebookShare to Pinterest

Good morning. Futures a touch higher, sp +2pts, we're set to open around 1685. Hourly charts are offering upside into the Friday close. Bulls need at least a weekly close >1675, which will set up the 1700s next week. 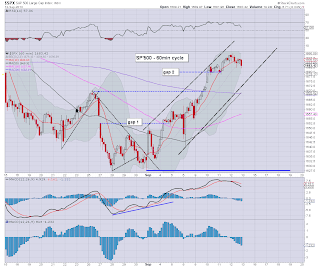 So...the bears aren't getting a big gap lower..and with QE today of 3-4bn, the market could even achieve a weekly close in the 1690s.

That would surely seal the fate of the bears for at least a few more weeks.
-

*I am long the indexes, and would consider an exit in the mid 1690s later today, although that seems somewhat unlikely.
Posted by Trading Sunset at 13:35:00
Email ThisBlogThis!Share to TwitterShare to FacebookShare to Pinterest

The market closed Thursday a little lower, but much more important will be how we close the week. Equity bulls should be satisfied with any close above the weekly 10MA of sp'1675. The bears should look to break back under the (still rising) 50 day MA of 1671 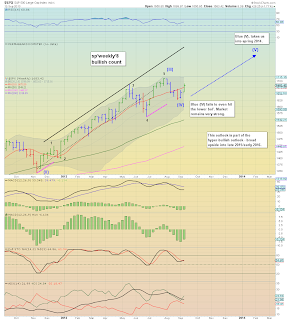 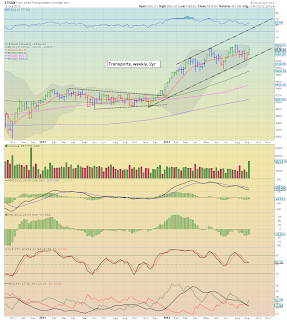 A down day for the market, but really, its nothing for the equity bears to get overly excited about, not least with the VIX still in the low 14s.

I can only think that the market will soon be entirely focused on the FOMC of next Wednesday, where we will probably see the first reduction in QE, if only 10/15bn. That still leaves a VERY sizable $70bn or so a month, which will continue to be a problem for the bears into spring/summer 2014.

I have not been following the currencies that closely lately, but noticed that the USD monthly chart is not looking so bullish. 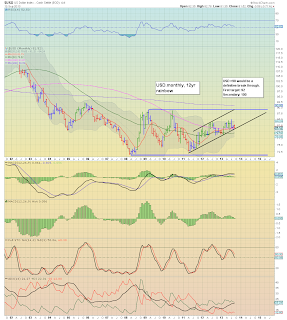 We certainly do NOT have a break of trend yet, but you can see the underlying weakness in the MACD (green bar histogram) cycle, which is set to go negative in October. Also of note, the monthly bollinger bands are getting very tight. A big move is coming. As ever..the only issue is which way? Right now, I'm guessing up, but that is dependent upon the EU (and Japan) still being perceived as weak.

Arguably, much of what happens in the world financial system is due to market perception, and that sure doesn't have to reflect the reality of the situation. Despite the continued 'dollar doomer' talk*, I still think that the EU and Japanese currencies will fall first.

*Many recognise of course that sooner or later, the global currency system will be 'reset' in some manner.

There is a fair bit of econ-data to conclude the week, producer prices, business inventories, consumer sentiment, and most importantly...retail sales. If those all come in 'reasonable', the market should be able to hold flat..or moderately climb into the weekend.

*there is sig' QE-pomo of 3-4bn, which will surely help give the market an upside kick.
--

--
Two video updates to close the day, the first from Mr Permabull...


You can see the chart line Oscar is talking about, on the Dow, weekly 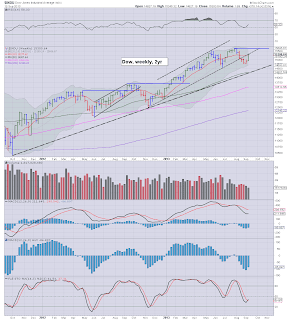 The doomer bears could justifiably argue it is a back test of broken support. However, you can see an outright bullish green candle at the important 10MA. You could even argue the Dow is offering the top of a RS  Other indexes are much stronger though, not least the Nasdaq.

--
The second from Walker, who remains even more permabearish than yours truly

The main indexes closed weak, with the sp -5pts @ 1683. The two market leaders - Trans/R2K, saw more significant declines of -1.1% and -0.65% respectively. Near term trend remains broadly bullish, and equity bulls should be seeking any weekly close >1675. 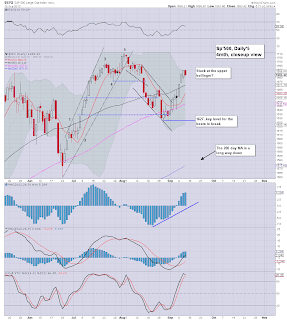 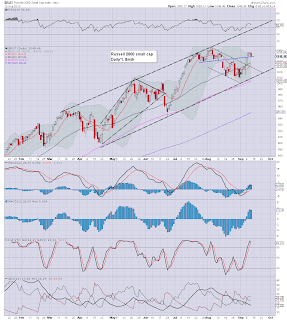 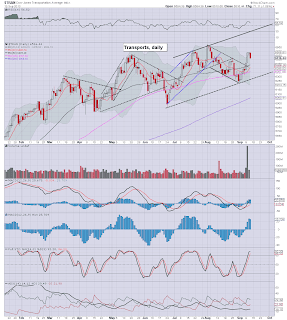 So..the bears finally managed the first daily equity decline of the month. Yet, considering the rather significant gains already this week, a minor pull back is not exactly unexpected.

Based on the bigger weekly charts, bulls should be able to comfortably sustain any Friday drop to the mid 1670s, but should most definitely be mindful if we break into the 1660s again.

Considering the strength seen in the Nasdaq, and indeed also the two leaders - Trans/R2K, earlier this week, I would be surprised if things unravel from here. The weekly charts simply don't support any bear case in the near term.

As ever, one day at a time, lets see how we close the week!