Whilst the main indexes managed very slight gains, the VIX closed exactly unchanged @ 13.39. Near term momentum is increasingly turning toward the equity bears. However, the indexes still look vulnerable for one final lurch to the upside, into the sp'1700s. 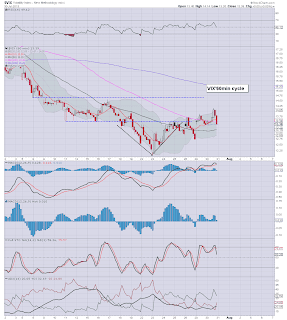 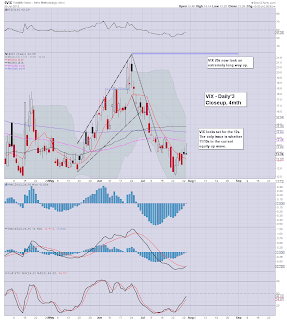 So...a flat VIX, but the underlying pressure is indeed turning back toward the equity bears.

Note the upper bollinger on the daily cycle, which is falling fast, it will be in the 14s by the end of this week..and that will prove to be a tough target for the bears to consistantly close above.
-

The main indexes all closed with moderate gains, with the sp +0.6pts @ 1685. The Trans/R2K indexes closed with gains of around 0.25%. Precious metals were weak across the day, closing moderately lower. Oil was weak, -1.2%. 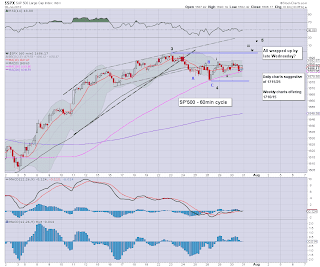 Another day of frustration for the bears, with the bulls again managing to hold the 1680s.

--
bits and pieces across the evening
Posted by Trading Sunset at 21:03:00
Email ThisBlogThis!Share to TwitterShare to FacebookShare to Pinterest

Wednesday is not only FOMC day, but also Q2 GDP (with revisions due, all the way back to the dinosaur era), and ADP jobs data. Considering the daily and weekly charts, bears are at very high risk of having to absorb another 2% of equity upside. 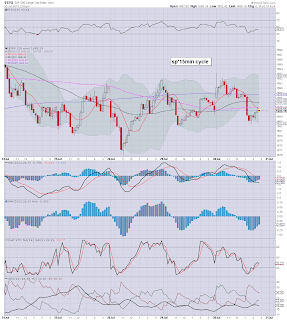 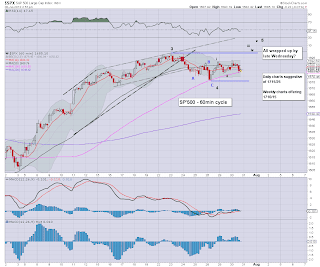 The smaller 5/15min cycles appear to have floored, just a touch above the semi-important 1680 level.

Best guess...market soars tomorrow, whether on the econ-data..or the FOMC press release.

I am more than content to be on the sidelines ahead of such an imminent threat.

Posted by Trading Sunset at 19:51:00
Email ThisBlogThis!Share to TwitterShare to FacebookShare to Pinterest

With a small snap of 5pts, down to sp'1682, some on the bearish side are getting overly hysterical again, about what is a very minor decline. Importantly, the inv. H/S level of 1680 is comfortably holding. Bulls should be content with any close back in the 1690s. 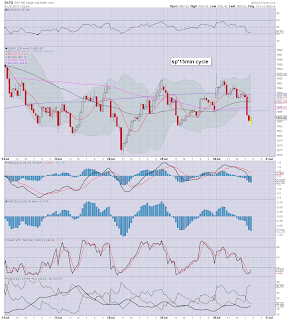 There is no clear turn/floor yet...but I have to guess 1680 will hold...and this was merely another cruel tease to the bears....before Mr Market snaps to the upside tomorrow - whether on econ-data in early morning..or the later FOMC announcement.
--

I have absolutely zero interest in chasing this lower, market still looks okay for at least one major wave higher.

--
Posted by Trading Sunset at 18:54:00
Email ThisBlogThis!Share to TwitterShare to FacebookShare to Pinterest

The smaller 5/15min index cycles look floored around sp'1688. A Tuesday close in the mid 1690s will easily open up the 1710/20s for Wednesday. Market looks set to smack the bears..before the next multi-week down cycle. 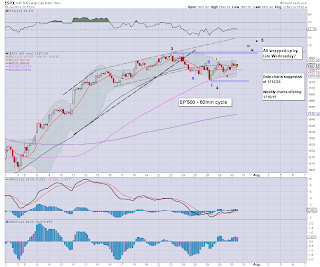 Again, its a relatively quiet day..Mr Market is merely waiting for the econ-data and FOMC tomorrow.

I'm holding to the original outlook, the micro-wave count is suggestive of a peak late tomorrow, although it has to be said, if we're 'only' in the 1705/10 zone tomorrow afternoon, I'll be somewhat hesitant about shorting this nonsense.

Daily/weekly charts are very much offering the 1715/25 area, and that would be a far better short entry.
--

*I am entirely on the sidelines, and seeing a major re-short in the indexes, preferably in the 1715/25 area..possibly tomorrow.
--


1.36pm..hmm, a little wave lower, but still, the 1680 level is holding, and even if that goes, the bears really need <1676.
Posted by Trading Sunset at 17:52:00
Email ThisBlogThis!Share to TwitterShare to FacebookShare to Pinterest

The main indexes are moderately higher, and the bulls are making a play to take out the sub'3 high of sp'1698. With the FOMC, GDP Q2, and ADP jobs data tomorrow, the market is going to make a sharp move...based on the trend..it'll likely be to the upside. 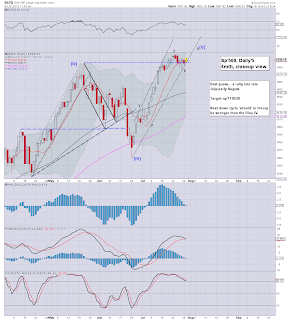 Right now, I would feel comfortable shorting the market anywhere in the 1715/25 area.

I am trying to keep in mind that its possible the sub'5 won't complete until the tail end of this week, or even early next.

*I was kicked out of a lousy SLV-long position very early in the morning. The near term outlook for the metals remains a bit of a mess. Gold and Silver remain stuck right under the May/June support floor.
--

Despite the weakness out there - apparent across the last two weeks, the market still looks set to go a little higher. Metals remain weak, along with Oil -1.1%. A 'brief' move into the sp'1700s still looks viable on FOMC Wednesday. 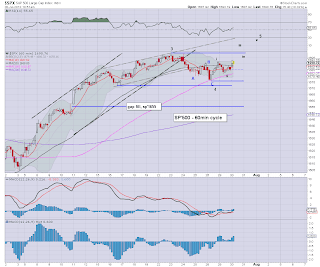 Not much to add, its a relatively quiet morning, but pressure still seems to be on the upside.

After all, bears are only able to ever manage moderate declines before the market battles back.
--

FB continues on its quest to claw back to the IPO $38 level. 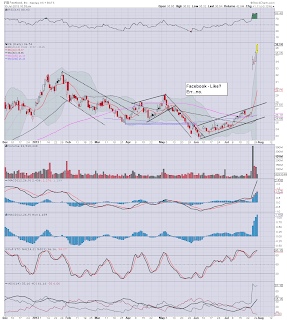 Arguably a hysteria stock, to be left alone, and merely watched for entertainment purposes.
Posted by Trading Sunset at 15:54:00
Email ThisBlogThis!Share to TwitterShare to FacebookShare to Pinterest

The main market is holding moderate gains, but its a real choppy mess right now, and the bulls actually look in danger of seeing the indexes turn red later this morning. Metals are on the slide, Gold -$9, Oil is -0.7%, with the daily charts for both looking especially weak. 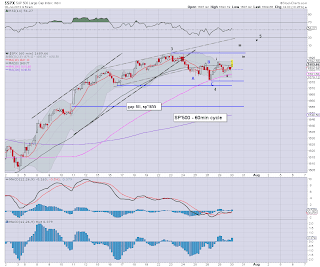 Baring a break <1680, I have to hold to the original outlook, which is still calling for higher levels into tomorrow.
-

As ever...thats what trading stops are for.
--

Complete loss of support in POT, MOS, and SQM 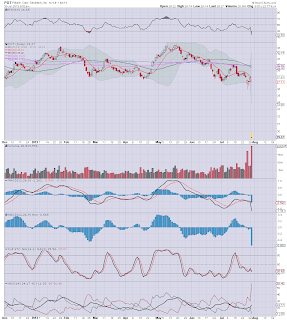 Due to some trading deal, Mr Market is assuming prices are set to tumble. Argubly, those 3 stocks are to be left alone, but no doubt..knife catchers galore in there this morning. 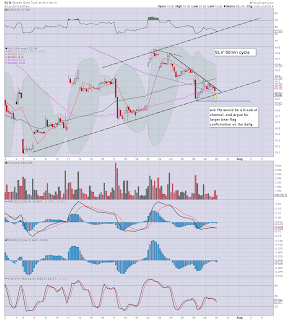 If that was the low of the week....well, I won't be surprised. Regardless, I don't like the break of channel, and the loss of the 19s.

So, I'm out of that mess, and back on the sidelines. Hmmm
Posted by Trading Sunset at 14:54:00
Email ThisBlogThis!Share to TwitterShare to FacebookShare to Pinterest 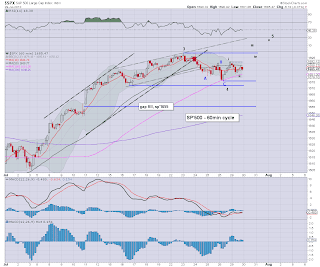 Mr Market will now be almost entirely focused on the nonsense that is the FED-speak. How many times will the Bernanke mention 'easing' or 'taper'? After all, the Fed is now the foundation of the US economy.

--
*SLV looks flat, so I'll still (to my surprise) be in my long-Silver trade at the open, hmm

Notable movers..Agriculture ... MOS, POT, and SQM
Posted by Trading Sunset at 13:49:00
Email ThisBlogThis!Share to TwitterShare to FacebookShare to Pinterest 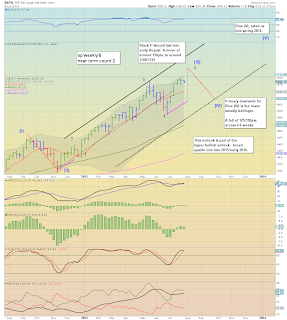 So...a minor victory for the bears to start the week, but the declines were relatively minor, even for the more unstable/volatile market leaders - Trans/R2K.

Bears even have the weekly 'rainbow' charts offering the first blue candle, although that will probably turn back to green if sp'1710/20s later this week.


Best case for the doomer bears

The following is the most bearish outlook I can come up with, across the rest of this year/early 2014. Essentially, a down wave much like summer/early autumn 2011. 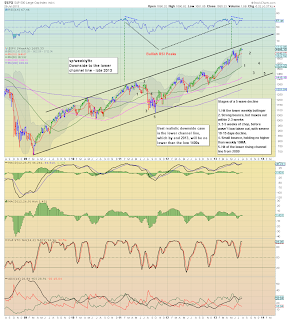 Of course, if QE is 'largely' continuing this autumn - as I expect, such a scenario will be next to impossible to achieve. The style of the decline is pretty straightforward, and for the more conservative traders out there, they would wait until sub' wave'2 completes. Anyway, its just something I will keep in mind across the next 2-4 months.

There are a few pieces of minor econ-data tomorrow, case-Shiller housing, and consumer confidence.

*there is no significant QE-pomo Tuesday...and absolutely zero on Wednesday.
--

I am currently still long via SLV (annoyingly underwater), and seeking to switch to shorting the main indexes sometime this Wednesday.

The main indexes closed moderately lower, with the sp -6pts @ 1685. The two market leaders - Trans/R2K, saw much more significant declines of 1.1% and 0.75% respectively. Near term outlook is still seeking one final minor wave higher, into the sp'1710/20s. 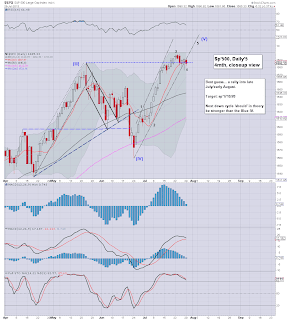 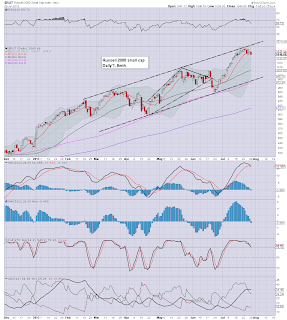 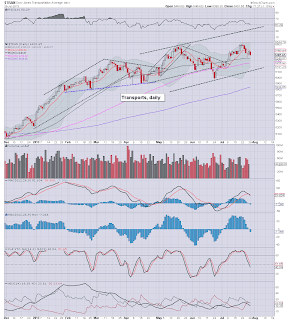 The smaller waves are always a bit of a nightmare to work out, but the daily sp'500 chart is still holding what appears to be a wave'4 'bull flag'.

I have to guess the market will still rally into the sp'1700s...and probably get stuck somewhere in the 1720s.

A brief spike on FOMC Wednesday looks very viable, especially if the market can close back in the upper 1690s tomorrow.

Both the Transports and the Rus'2000 indexes look especially weak, and it is entirely possible they have already maxed out. If the main 'headline' indexes - of the sp/dow/nasdaq, rally across Tue/Wed, it is probably saw to assume the Trans/R2K will also rally, but they sure won't be breaking new highs.