The Rainbow Indexes - all set to go Bullish

There is a time for simplicity, no trend lines..no channels, no support/resistance...no 'target zones'.

The Elder Impulse charts I have to come to make use of only relatively recently.

*the following charts do still have EMAs, I suppose I could have removed those too, but..regardless..lets see where we are across 6 main indexes... 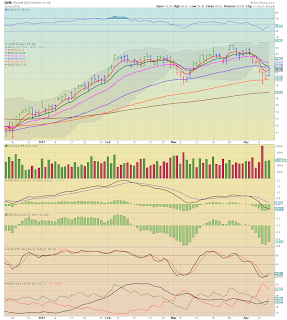 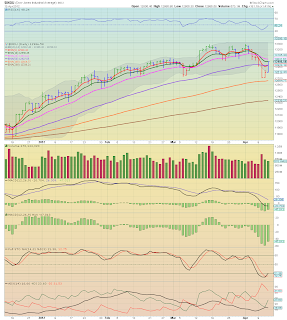 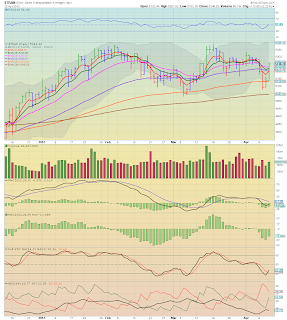 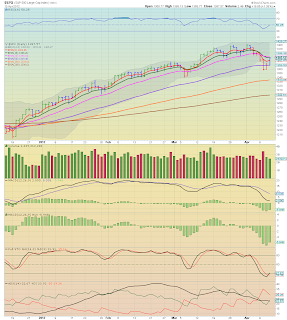 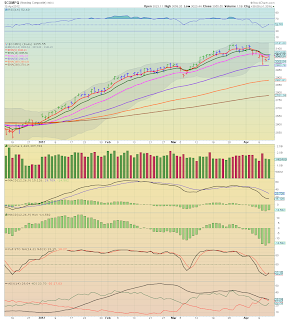 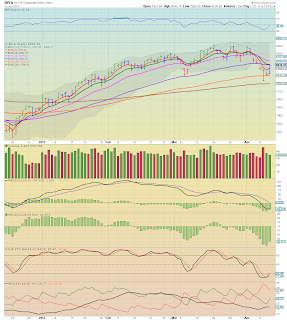 The transports was the only index to get a confirmed trend change today, and is now arguably issuing an outright 'No shorts, be LONG' signal.

I would believe its fair to assume, that even if the indexes are flat or a touch lower tomorrow (no more than -0.25/0.35%) that we'll see the other 5 charts also provide a green candle for the Friday close. That would set up for a further move higher next Monday/Tuesday. I'd guess that Wed-Friday might easily be a consolidation phase as we have OPEX next Friday. Whether we fall after opex...well, lets get next week out of the way first.

There are endless issues right now, especially on the broader weekly and monthly cycles, but I think its important to have highlighted this simplified view of things. There is a time for oscillators, and all the other chart-indicators, but right now..I think the above 6 charts tell the story that needs to be told.
Posted by Trading Sunset at 23:30:00
Email ThisBlogThis!Share to TwitterShare to FacebookShare to Pinterest

A very strong day for the bulls. They got the follow-through they desperately needed. Although its improtant to note we are still yet to break out of the danger zone. Only a few closes above 1405/10 can the bulls start to feel confident again. 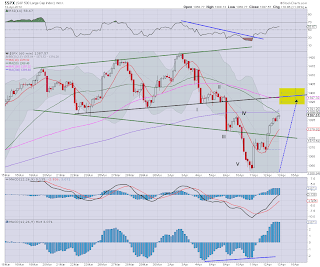 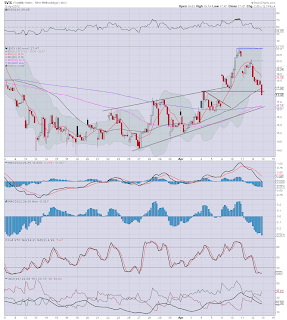 VIX closed very poorly for the bears, arguably the last line is 16.75 tomorrow/Friday.

SP' closed at what many would call overbought..but we can still get one or two more up days before we need to level out for a few days.

*GOOG earnings were slightly better than expected, they are also doing a 2 for 1 stock split.

Much more later...especially on the Metals, and the bigger cycles on the indexes.
Posted by Trading Sunset at 21:15:00
Email ThisBlogThis!Share to TwitterShare to FacebookShare to Pinterest 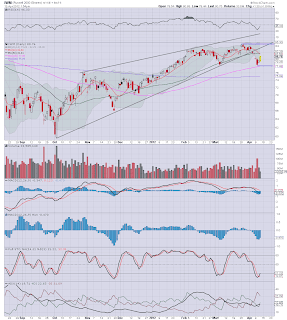 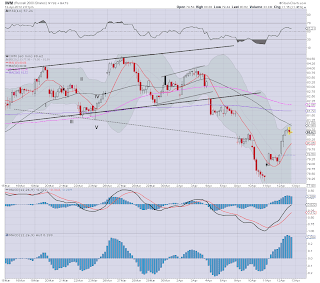 More after the close.
Posted by Trading Sunset at 19:06:00
Email ThisBlogThis!Share to TwitterShare to FacebookShare to Pinterest

Bulls need to PUSH PUSH PUSH. They can't let the rally slip back and reverse, or we'd be looking at a very strong reversal. So long as we remain broadly above the 10MA on the hourly cycles...the recovery is on track. Primary target would be 1395/1405 tomorrow..or early Monday. Whether we can go any higher than that....we'll just have to wait. 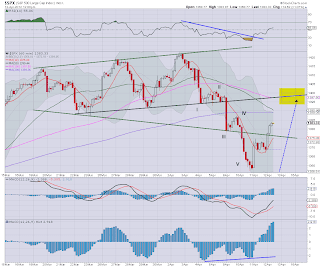 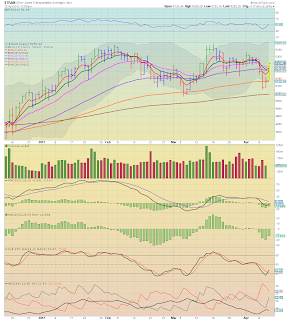 Bears are clearly on the run...and as noted earlier, no one should be short right now. The fact the Transports are already showing a green candle on the rainbow chart.. that is a VERY big warning to the bears. Just 1 more up day..and we've got a real trend underway.

In the very near term...trend is up - and the daily cycles certainly support that. The monthly cycles are still a real problem though..more on that later though...after the close.
Posted by Trading Sunset at 17:03:00
Email ThisBlogThis!Share to TwitterShare to FacebookShare to Pinterest

The bounce continues - as expected.

The question remains..how far? Considering the daily cycle - as noted last night, its VERY viable for the market to cycle upward for the next 5-7 trading days all the way into opex next Friday.

A bearish scenario would be that market at least moves no higher than the recent high of 1422..or preferably 1395/1405. That would be a nice lower high..and would be a fine set up for a major wave'3 after opex.

The bullish scenario needs to get Sp' back above 1400 quickly. It is arguably VERY important we stay above the 10MA on the hourly charts. Its acceptable to briefly go below the 10MA, but generally, anyone day/swing trading in a Long position, would have a stop just below the 10MA. 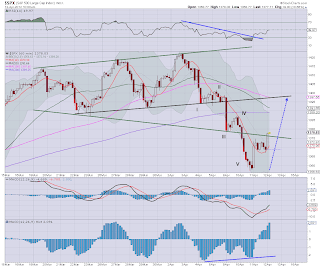 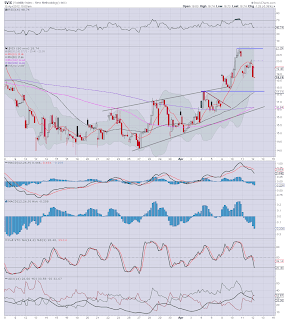 Only a maniac would be adding..or holding to short positions right now.

Arguably, any new/existing long positions should have a 'get outta there!' stop around the sp'1365 level. As always, it depends on how flexible you wish to be..and we all know the algo-bots love to do stop-sweeps to kick traders out, in order to churn/create market volume.

*I hope these intra-day updates are of use this week. Good wishes for your trading day!

More later in the day.
Posted by Trading Sunset at 15:02:00
Email ThisBlogThis!Share to TwitterShare to FacebookShare to Pinterest

Good morning, a quick look at the two shiny metals.

Both Precious metals remain weak, on a daily, weekly, and monthly cycle. The 5-10 year up trend is of course still massively bullish, but the last year has been rough for those who bought near the highs. 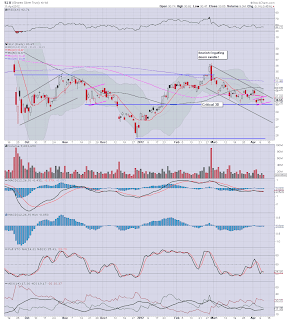 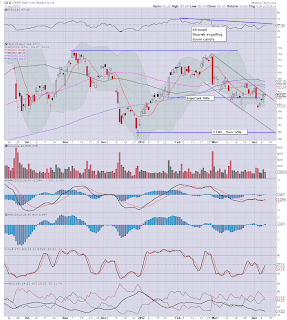 Silver MUST hold $30..or there will be real trouble. Gold is still stronger, but is also still in a broad downward channel.

*considering the weakness in Copper (see previous post)...if I had to guess...I'd say Silver will snap through $30 within the next 1-4 trading days, and take Gold down with it.

Posted by Trading Sunset at 12:00:00
Email ThisBlogThis!Share to TwitterShare to FacebookShare to Pinterest

Commodities seem to be leading the equity market by a week or two lately, they were certainly warning of problems last week - whilst SP' was making a new high at 1422.

First, lets look at the CRB 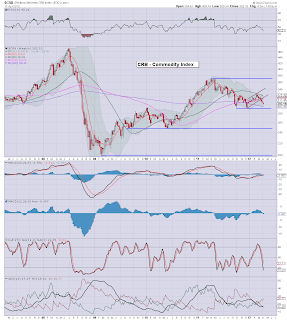 We have broken below what was indeed probably a bear flag..and now the next major target is the support level at 290. 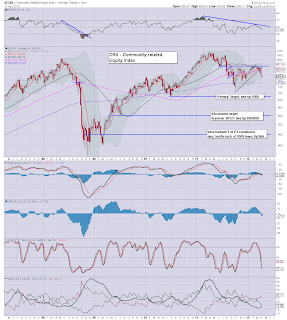 The CRX is a commodity stock-related index. Take a look at the mining or some of the Oil/Gas sector lately, many of them have been smashed down. The CRX broke a major trend support just over 2 weeks ago. The next major support is 800 (5% lower)...if that fails..then the next primary bear target would be 690 - a further 15% lower - this would arguably suggest sp'1150 sometime 'soon'.
- 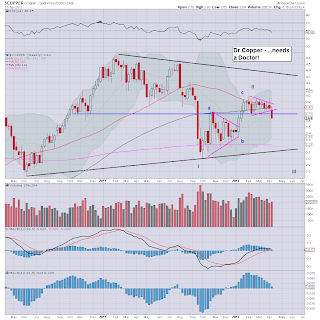 The bearish count on this chart is very preliminary. It assumes a major cycle high occurred in February 2011. We have seen a bullish pennant break...to the downside! This was very surprising, and bodes VERY badly for the main markets.

From a cycle perspective, just look at the MACD (blue bar histogram)..we are due to go negative cycle NEXT week. So..further declines in Copper, and the wider commodity/equity market would be the default viewpoint.
-

So...whilst I earlier posted near term index cycles that do suggest a number of days upside, I am trying to keep in mind that commodities are flashing major warnings - and have been for a number of weeks.

This is an especially tricky time to trade. The ultimate question remains...was Sp'1422 the top?