Its time for the most important posting of the month. Lets have a look at ten of the world indexes. 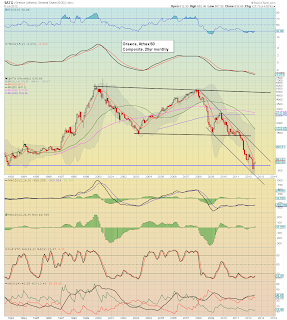 The Greek index is having a reasonable month so far, +4.5%..but 4.5% of whats left is...not much. The Greek index remains near obliterated, yet will probably lose a further 7% of the 9% that remains from the highs of 2007/8 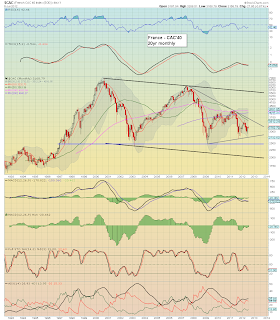 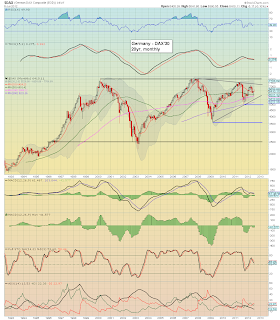 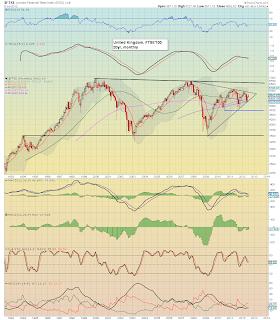 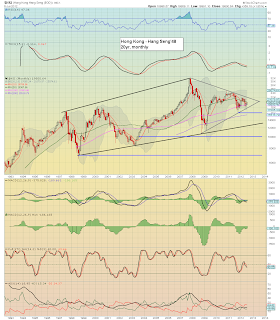 HK is having a moderately good start to the month, but is clearly getting squeezed between the upper/lower trend lines. Bears should seek a move below 18k, but that is around 10% than current levels. Only with a move over 22500, would I get bullish on the Hang Seng. 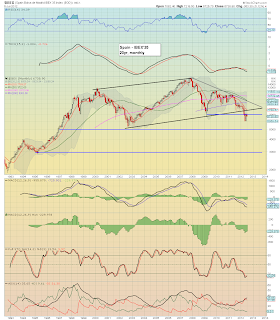 Having broken the big 7k level, the IBEX is still on track for a hit of 5k. We can see a very clear back test of the old support level, and now we're seeing signs this July of another attempt to push below 6k..and make a challenge for the primary target of 5000. I remain VERY confident on the outlook for this index. 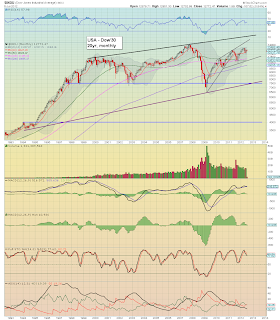 The US indexes are of course more strongly supported (not least by the Fed) than other world indexes. Yet we do still have the April rollover, and despite the recent ramp since early June, we've not broken new highs. Primary target on the dow this summer remains 11k. A move to around 10500/250, would in my view be highly suggestive of a late autumn collapse wave to the 8000/7500 zone. That would make for one hell of a great place to 'buy the proverbial dip'. 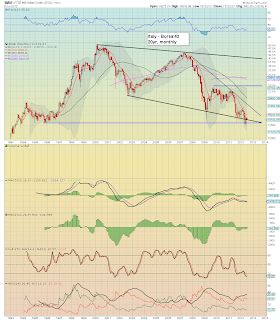 Without question, the biggest of the PIIGS, Italy has seen a bounce from the old 1996 (the year) support level. Yet, the overall trend remains down, and I'd look for a break again under 12500, and that should open up 10k. This index only appeared in 1993, and there is no chart history under the 10,000 level. I guess some could argue 'its all empty air... until 0'. 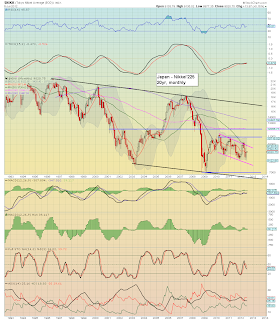 The deflationary mired Japanese index remains struggling. A move from 9k to 7k looks very reasonable to expect in the coming 6-18months. From a MACD cycle (green bar histogram) perspective you can see the Nikkei is all set to go negative cycle in August. There is nothing bullish about this index, and besides, the last two decades have been nothing less than a disaster. 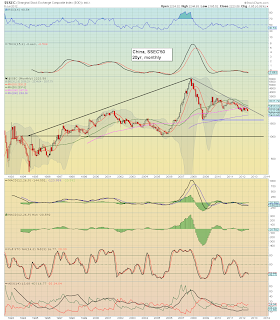 China remains a real curiosity to watch. There remains endless talk as to whether a 'soft landing' is possible. Of course, every time some China data is released, its always highly questionable as to its accuracy. Sure the China Government probably 'meddle' with their econ-data to some extent, although few other governments could justifiably argue they are any different. Primary target would be 1750, if China does have serious underlying issues, then a return to the big 1000 level will be viable. That is around 60% lower than current levels. The Chinese investors will not be pleased if that comes to pass.

The two biggest PIIGS of Spain and Italy remain entirely on track for VERY significant further losses this year. The big question is whether the other European indexes like the UK, France, and Germany will manage to find support on their rising channel lines (from 2009)..or break, leading to much lower levels.

There is also the issue of whether the USA Dow'30 can hold above 11k. Any kind of break under 11k, would be a real warning to the bulls about a possible late Autumn collapse wave to the 8/7k level. For now, that remains in the realm of 'crazy talk', but the levels are clear, and to be kept in mind for the rest of this year.


The deflationists..are so far right

Despite the endless 'omg, hyperinflation is coming!' posts/articles all over the web since the original bailouts/QE started in autumn 2008, we've seen only marginal increases in prices. Yes, food/energy ARE substantially higher, but falling home prices have outgunned everything else put together. Once home prices do finally find a cycle floor, then I'd then expect some inflationary spiral to begin, but that still seems some years away.

The central bankers of course know only one thing...to print, and print they will, as the Bank of England showed just last Thursday with the US equivalent (relative to population) of $450bn in new QE. It was actually disturbing to see talk of 'when will be the next BoE QE' the following next day on CNBC Europe.

As many feared..the markets - and those cheer leading media maniacs, are nothing less than addicted to their QE fix.

Mr Market..and the cheer leaders all need a few years in rehab. As things are, there seems no chance of that, so for the bears, the only issue does indeed remain 'when will the Bernanke next appear to do QE'

Lets see if the two big PIIGS of Spain and Italy will lead the way lower. If those other European (and USA) indexes do take out their 2009 trend lines (roughly equivalent to sp'1200 or so), then look out for much deeper and...scarier falls in the late Autumn.

Good wishes.
Posted by Trading Sunset at 20:12:00
Email ThisBlogThis!Share to TwitterShare to FacebookShare to Pinterest

A simple overview..to close the week

To close the trading day, and the week, here is a very simple overview of where we are. 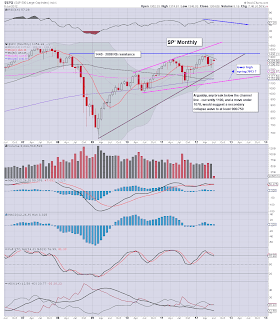 The Tuesday peak of sp'1374 now seems a little distant. In reality, we could still put in new highs, even above the April peak of 1422, although I continue to believe that highly improbable due to the underlying weakness in the global economy.

What is clear for next week, the bears need to pick up some downside momentum, and see good confirmation with the VIX breaking higher..at least to 20..preferably 24/25.

The ultimate doomster target remains the lower channel/wedge line (pink) of sp'1100. Right now that seems so very far away, but if we can take out the recent June low of sp'1266, its 'game on'. The Bernanke can surely not do QE3 this August, not unless Mr Market gets greatly upset between now and the next FOMC meeting (Aug'1st annoucement).

Between now and early August, the bears do have the opportunity to whack this market lower. If they can't do something significant next week (at least testing 1330/20s), then arguably, those traders/analysts touting end year targets as high as sp'1500/1600, could easily instead be right.

A somewhat bearish end to the week, after the peaks of sp'1374 on Tuesday - when many (myself included) were considering an eventual move as high as 1390/1400. I suppose its still viable we could yet hit those levels, although if we can break into the sp'1320s next week, those upper targets can be pretty securely thrown out. 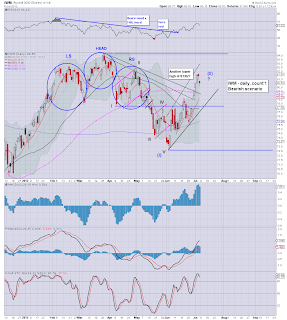 IWM remains one of the most unstable indexes, it has a very long way to fall just to get back to its early June low. Unlike the other indexes, from a MACD cycle perspective, it did manage to put in an even higher (blue bar histogram) tower. It is one very bullish sign for those seeking new highs this summer. However, unless I see IWM break 85.0, I can't become bullish, as its already failed many times this year. 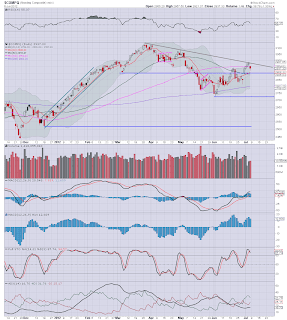 Tech' looks really good from a bearish viewpoint, a perfect hit on the descending trend line from the recent peaks. The MACD cycle looks good for a decisive rollover, and there is plenty of downside possible, but we'll need to see a break under 2800 to confirm something 'bigger is coming'. 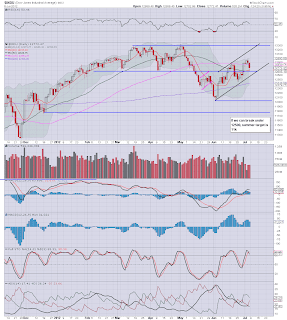 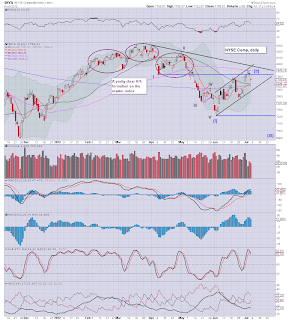 The master-index looks great for the bears. We'll need to see a break under 7600, preferably 7500.
Bulls will be desperate to break the big 8000, if they can achieve that, then the longer term outlook will switch to primarily bullish - no matter how sickening that will sound to those now short. 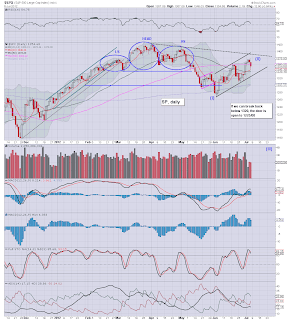 The first target for the bears next week should be a daily close under the 50 day MA, currently 1339. The bears would do really well to close next week somewhere under 1320. If they can manage that, the weekly and monthly cycles will again all be synced up, and the door will be open to sp'1225/00 within the following few weeks. 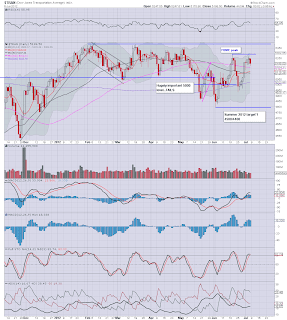 The tranny remains the weakest index that I follow, and it never did manage to break the FOMC peaks (equivalent to sp'1363). Bears will want to see a move back below 5k, and a close next week below the recent low in the 4950 area.

Those were some pretty impressive charts there I think, especially the NYSE composite. IWM is the only index right now that is really close to violating (with a new high) what many still believe is a 'wave 2'..
--
The short-stop levels are clear for those currently short...tight 1374, loose 1390/1400. Anything over 1400, and the bear case is off the table.
--