Another fun filled trading week ahead

Last week was pretty dynamic, initial losses looked promising, but then we saw a pretty fierce ramp from 1325 to 1356.

Where now? There are still the usual bull maniacs touting new index highs >1422 in the months ahead, although they do seem to be less in number. I think the lousy earnings are starting to wake up a few more analysts out there. 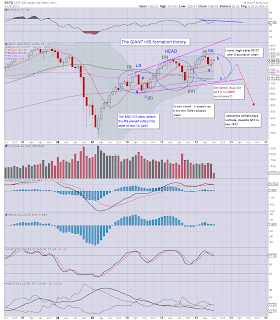 Near term primary target remains 1225/00. Secondary target zone is 1170/50. That could be hit as soon as mid August - and would put the bigger picture outlook back on schedule. 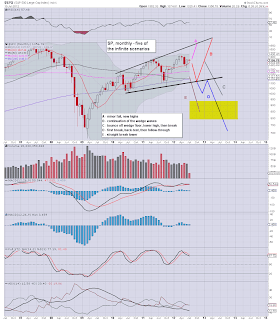 My best guess remains scenario'B, although I am starting to wonder if C' is more likely. There are a few reasons for that, mostly its about time. The notion of breaking below sp'1100 this year seems a stretch on any basis, as we should get a very large bounce of 150/200pts for an intermediate wave'2 UP. That will take probably take 3 or 4 months to complete. So, even if we floor in the 1100s by late August, add on 3-4 months to that..and we're basically ready for Santa to appear.

I've a chart to explain that outlook, and will probably post it tomorrow evening.

Futures are currently marginally lower by sp -3pts, nothing exciting. We could easily see an intra-day drop of sp 7-10pts. I'd still guess we see a largely flat close to Monday, and then further gains on Tuesday. I remain looking for a re-short somewhere around sp'1365-85, no later than Thursday.