US indexes are not even half way through April, but are already showing very significant declines -  ranging from -2.6% (Dow), to -5.2% (R2K). Equity bears should seek a monthly close under the 10MA, which for the sp' is currently at 1774. 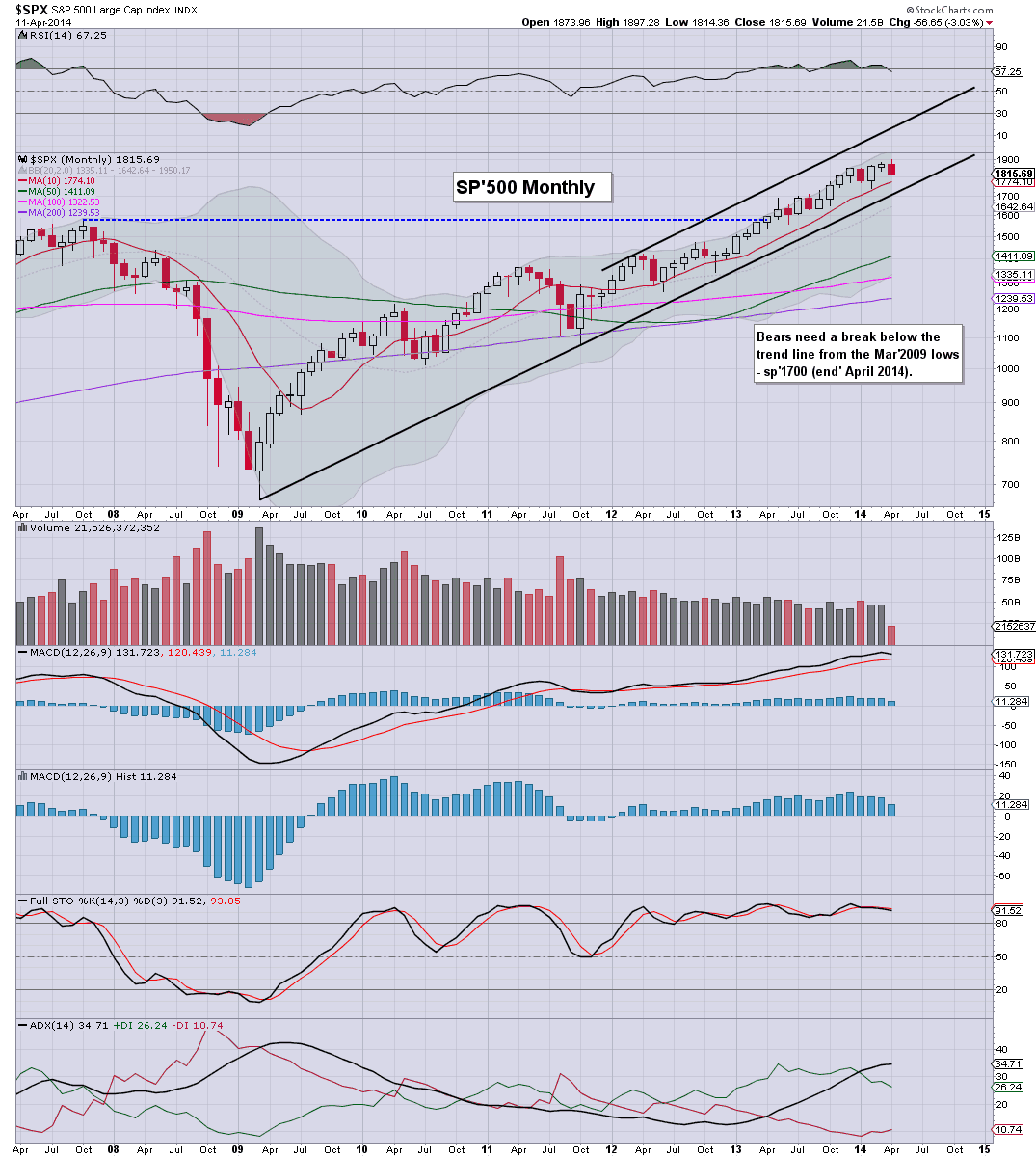 The big sp'500 is down just over 3% so far this month. There is easy downside (as supported on the hourly, daily, and weekly cycles) to the sp'1770s next week. The monthly 10MA of 1774 is a key level, and despite the recent weakness, I do not expect a monthly close under it until June/July.

Underlying MACD (blue bar histogram) is ticking lower for the fourth consecutive month, and at the current rate of decline, will turn negative cycle in June/July. It remains notable that the upper bollinger is offering the 1960s, but I think it is very probable that the high for the giant wave from Oct'2011 is now in at 1897. 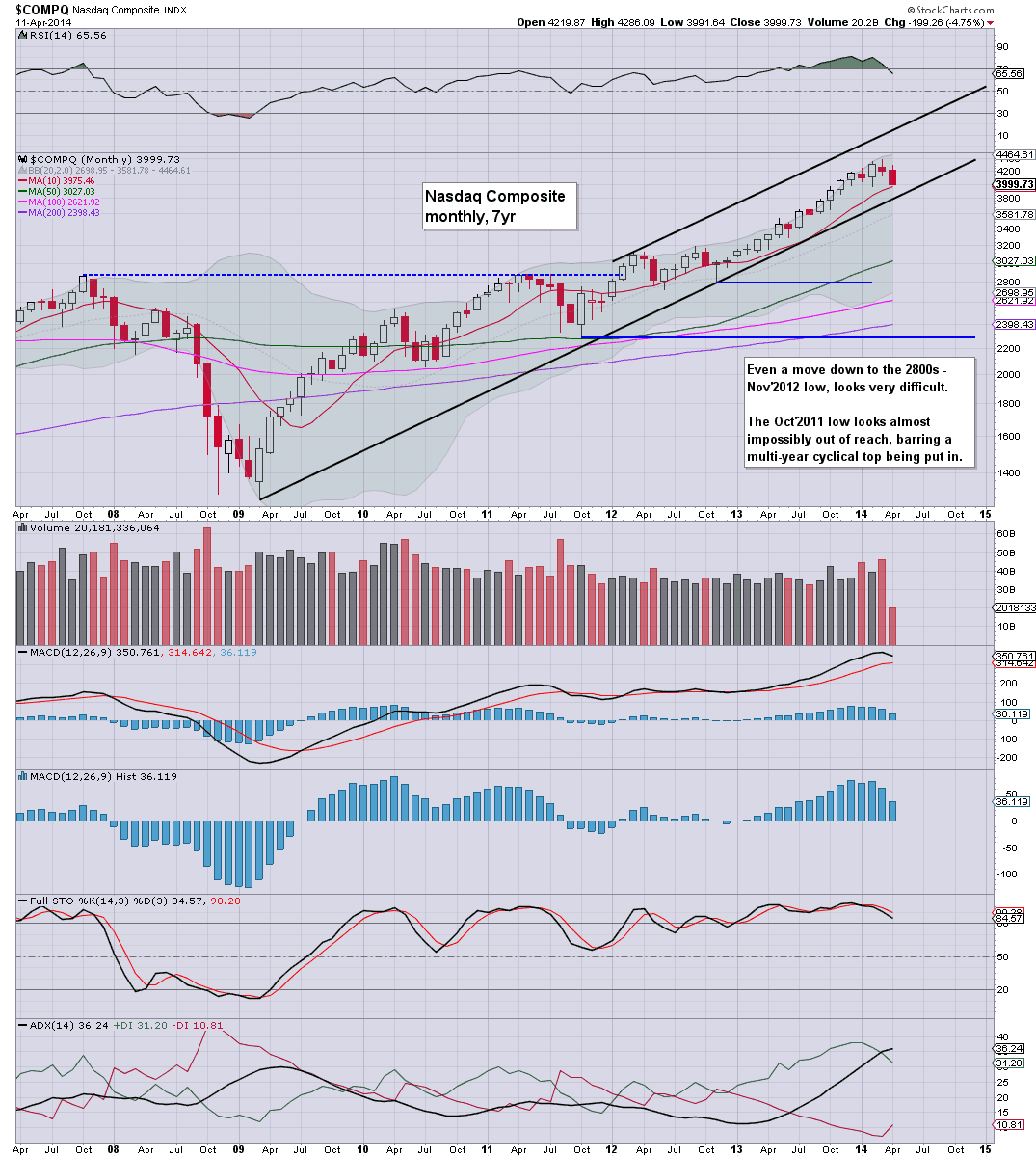 The tech sector has really suffered across the past 9 trading days, -4.75%, and looks set to break below the monthly 10MA of 3975. Indeed, equity bears should be looking for the 3800s next week. Underlying MACD cycle is steeply rolling over, and will likely turn negative in May/June. 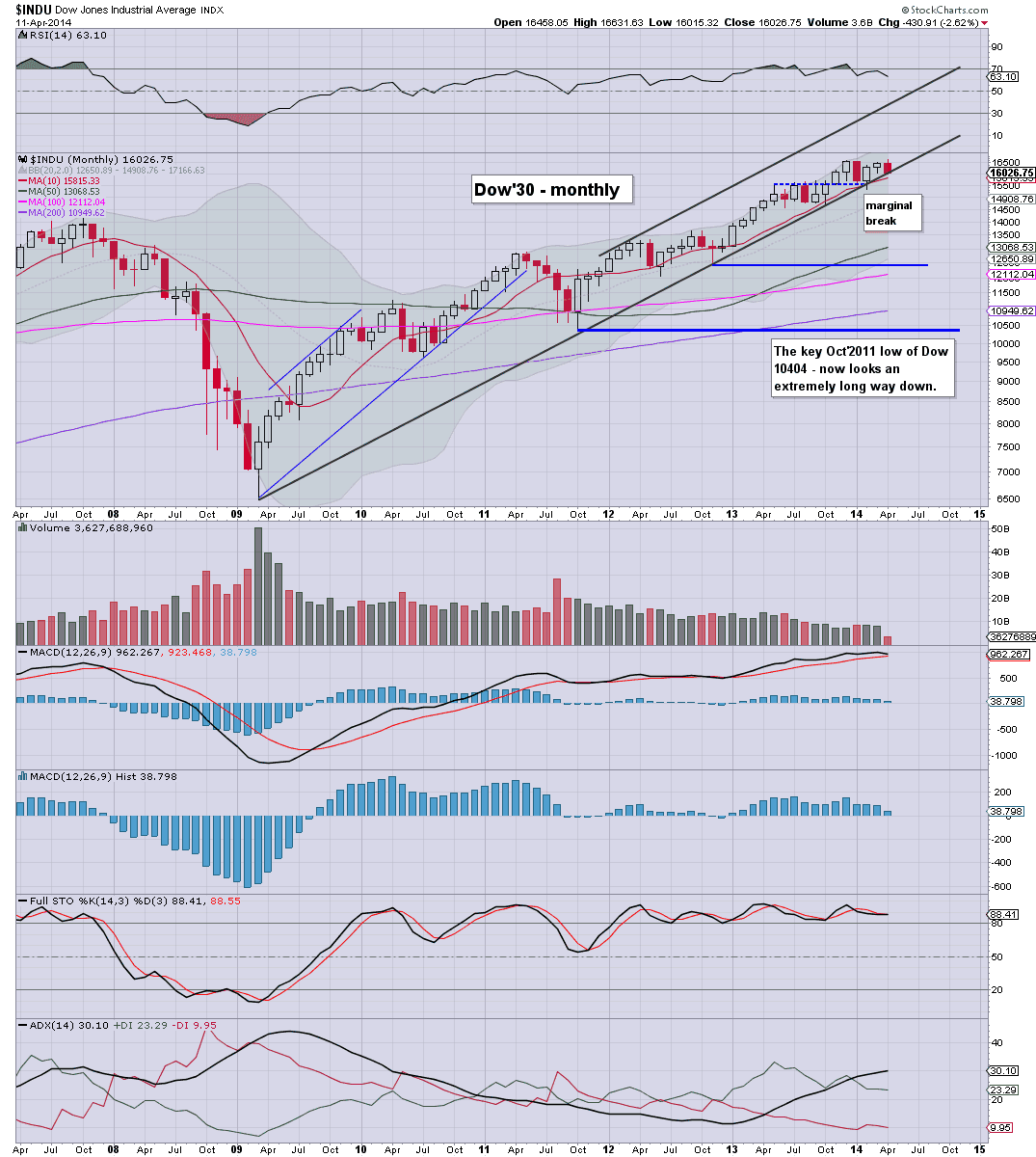 The mighty Dow has already lost 430pts this month, and looks set to lose the 16k threshold next Monday. Further, the monthly 10MA in the 15800s looks set to be breached, and from a monthly perspective, that opens up downside into the 15500/000 zone.

Underlying MACD cycle is the weakest of all the main indexes, and is set to go negative cycle as early as next week - if the market drops to the 15700s or lower. It is a very bearish situation, with broader downside of 14/13500 this summer. 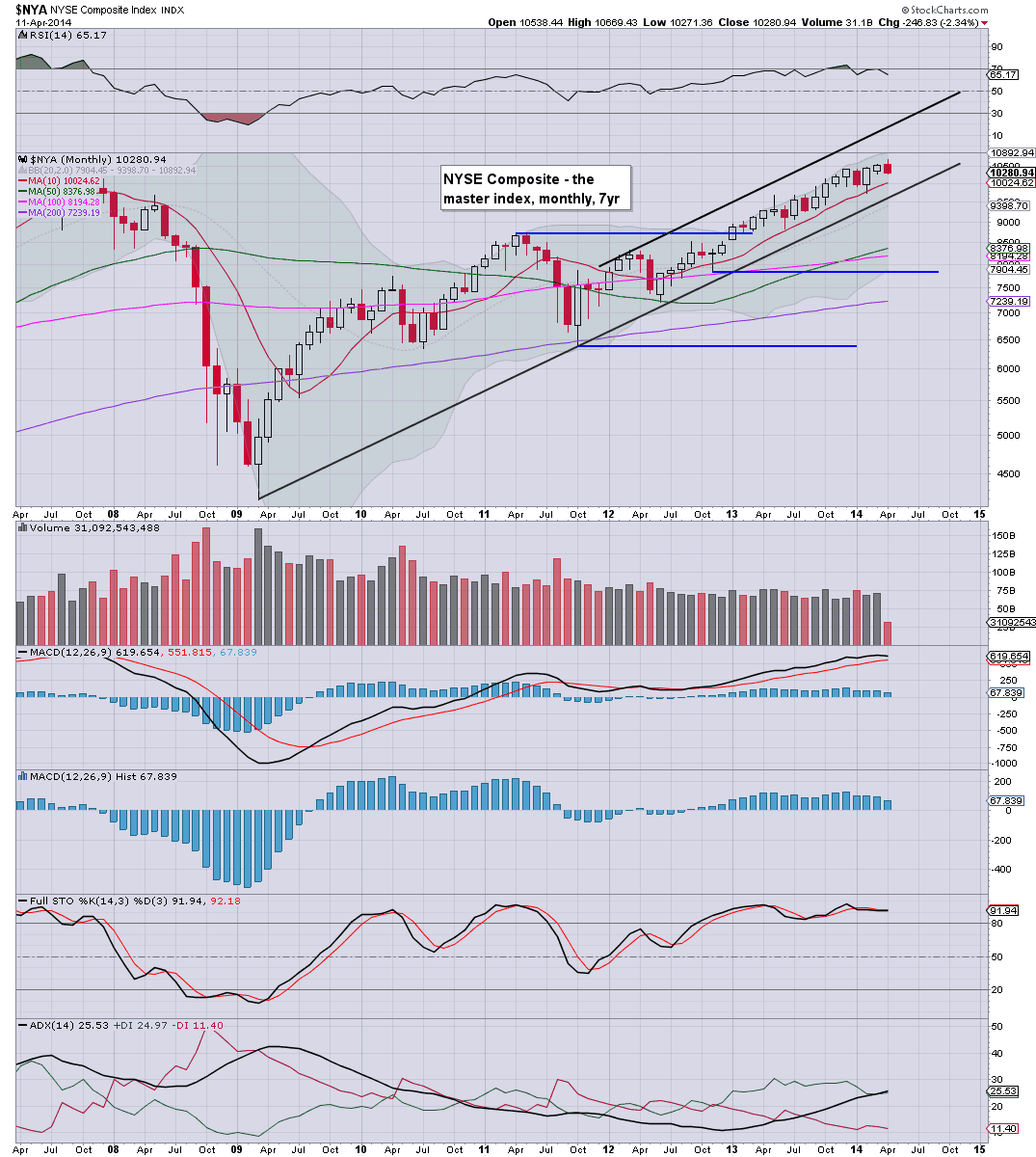 The monthly candle on the NYSE composite is a bearish engulfing one. First downside target is the big 10k psy' level, which is just under 3% lower - which would equate to the sp'1770/60s. 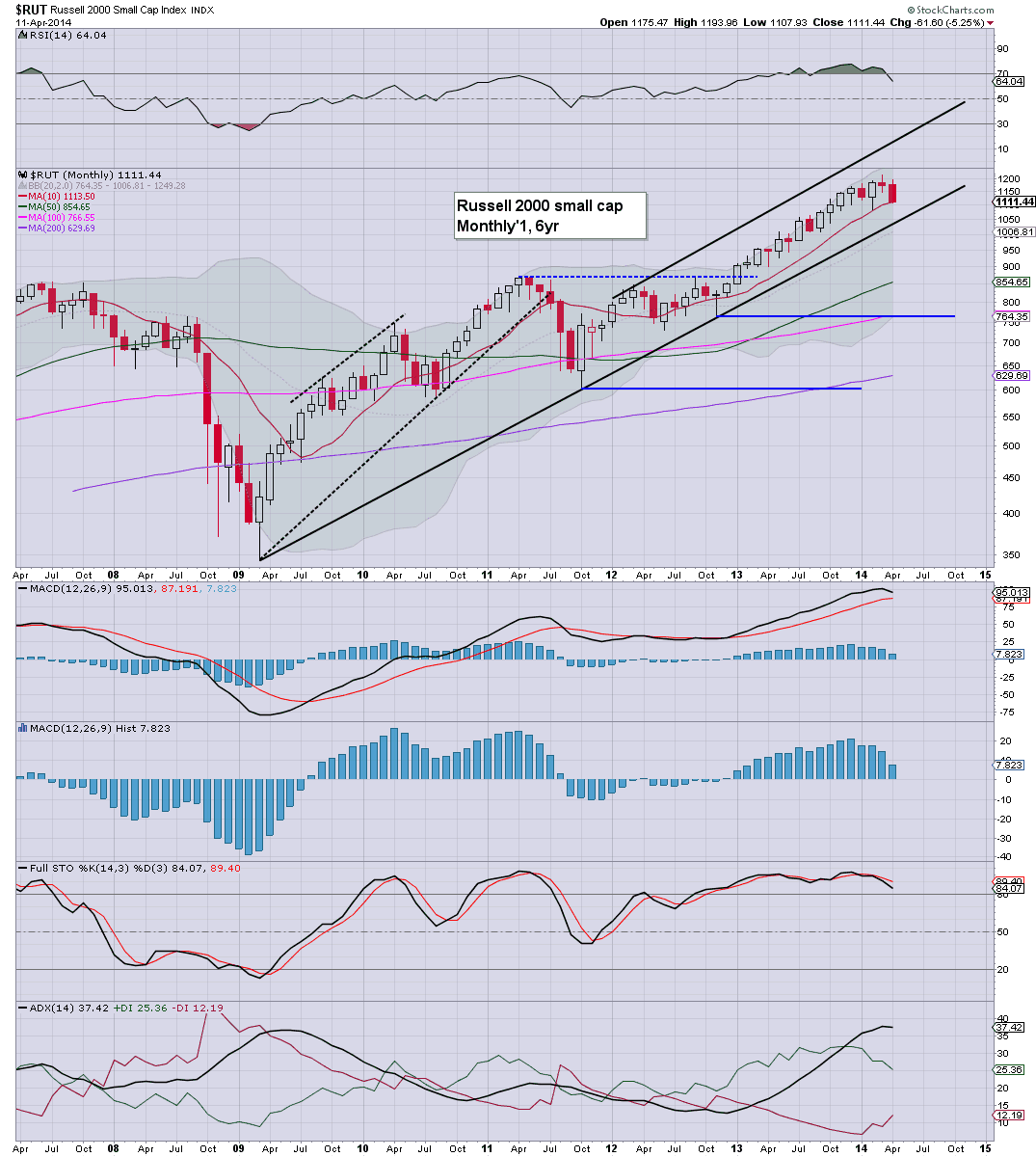 The R2K monthly chart is displaying some pretty significant technical damage, with an April decline of -5.25%, and we've closed this week under the 10MA. Next key level is the giant 1000 level, which is a good 11% lower. Underlying MACD cycle is set to go negative in late April/early May. 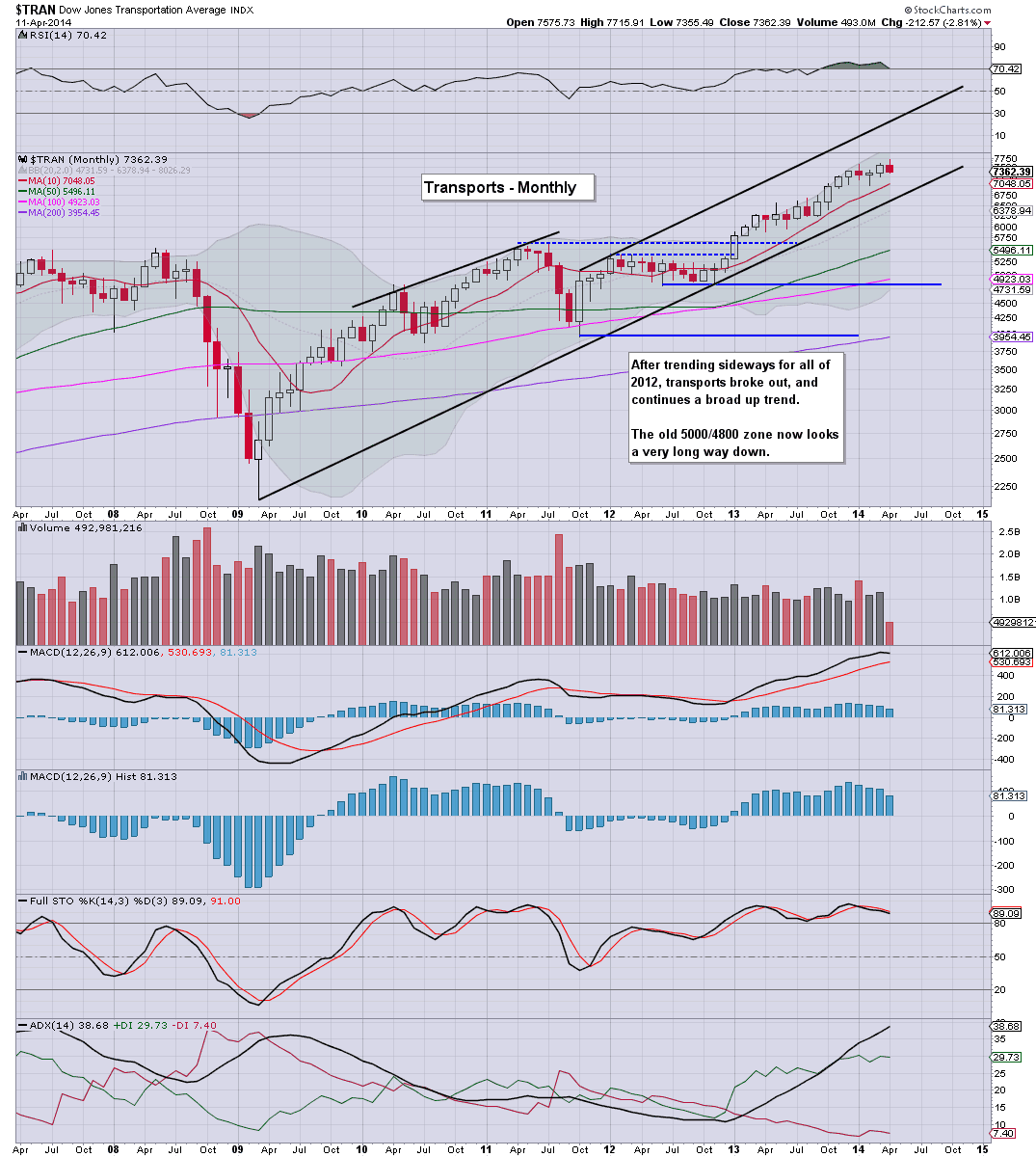 We're not even half way through the month, and most indexes are showing very significant declines. With just another 2-4% lower, we should have clarification that the giant wave from Oct'2011 has recently topped at sp'1897.

The second market leader - R2K, looks especially dire, and if the market does get 'spooked' in the coming week or two, it'd be pretty wild to see the low 1000s again.


Bearish for next week

I would really like to see the market remain under the hourly 10EMA in the current down cycle. Right now, the 10EMA is sp'1828. By Monday lunch time it will be in the low 1820s. So, if we're in the 1830s (for whatever reason) next Monday, my 'ultra-bearish' outlook gets thrown out. 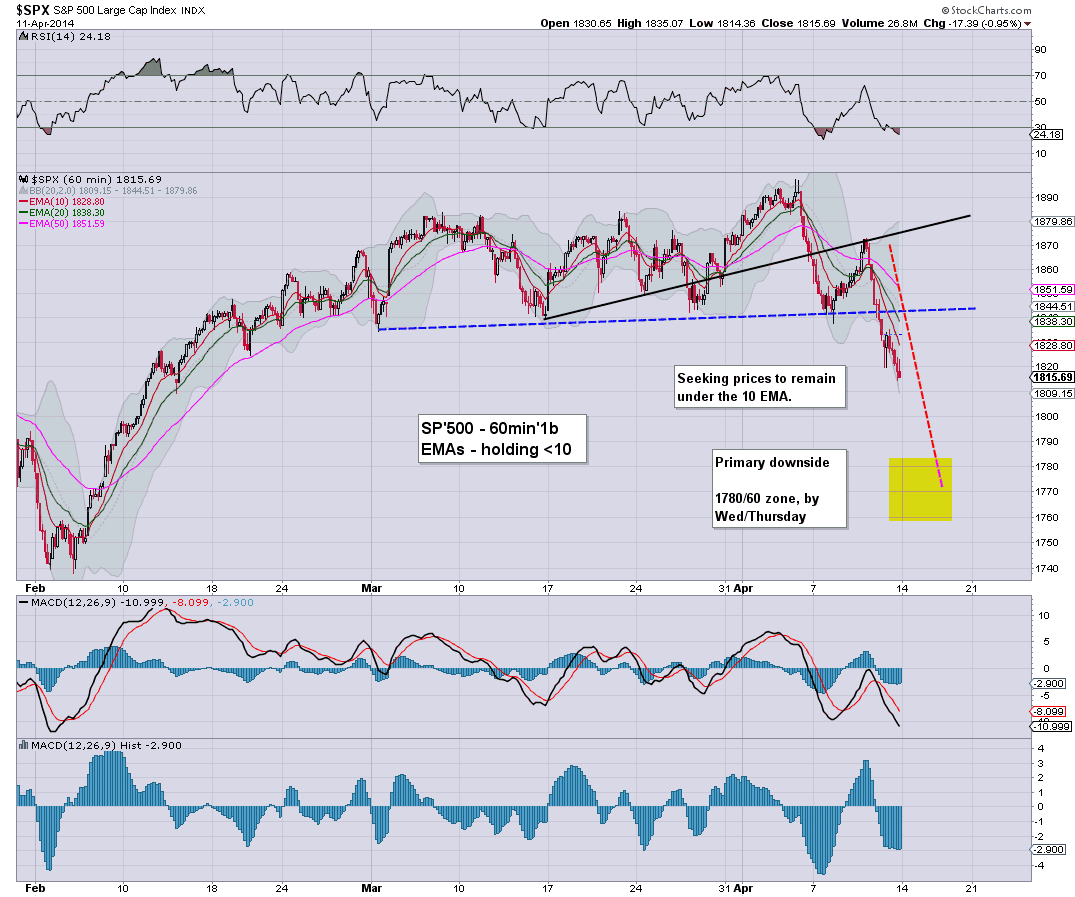 If the market can remain under the 10 EMA across Monday, it will give me great confidence of a 'straight down' move for Tue/Wed. First downside target would be the 1770/60s, but there is a 'small' chance of much lower levels.
--

The week begins with retail sales data, and CPI data on Tuesday. The Fed beige book is due Wednesday afternoon, but if the market is already getting smashed <sp'1800, then I don't think many will pay much attention.

Thursday will see the usual jobs data, and the phil' fed survey.

Friday is CLOSED, and because of this, opex will instead occur on Thursday.

*the only QE of note is next Tuesday, just $2bn or so..nothing for the equity bears to get overly concerned with.
-


A wild week ahead

If we do stay under the 10 EMA next Monday, I'll be seeking much lower levels by late Tue/Wednesday - under the 200 day MA of 1760. As it is, equity bears will need to be persistent next week, and not allow the bulls to bounce the market more than 10/15pts, from any intraday low.

What I have little doubt of, volatility IS coming back to the US (and world) equity markets, and in many ways, that is the most exciting thing of all this spring.

Just another 3% lower will clarify things

The equity bears achieved a very bearish weekly close. We're now just a few percent away from a hit of the lower weekly bollinger band, something we've not done since 2012. Price action is different from 2013, volatility is coming back, just another 3% lower, and there will be clarity for the next few months. 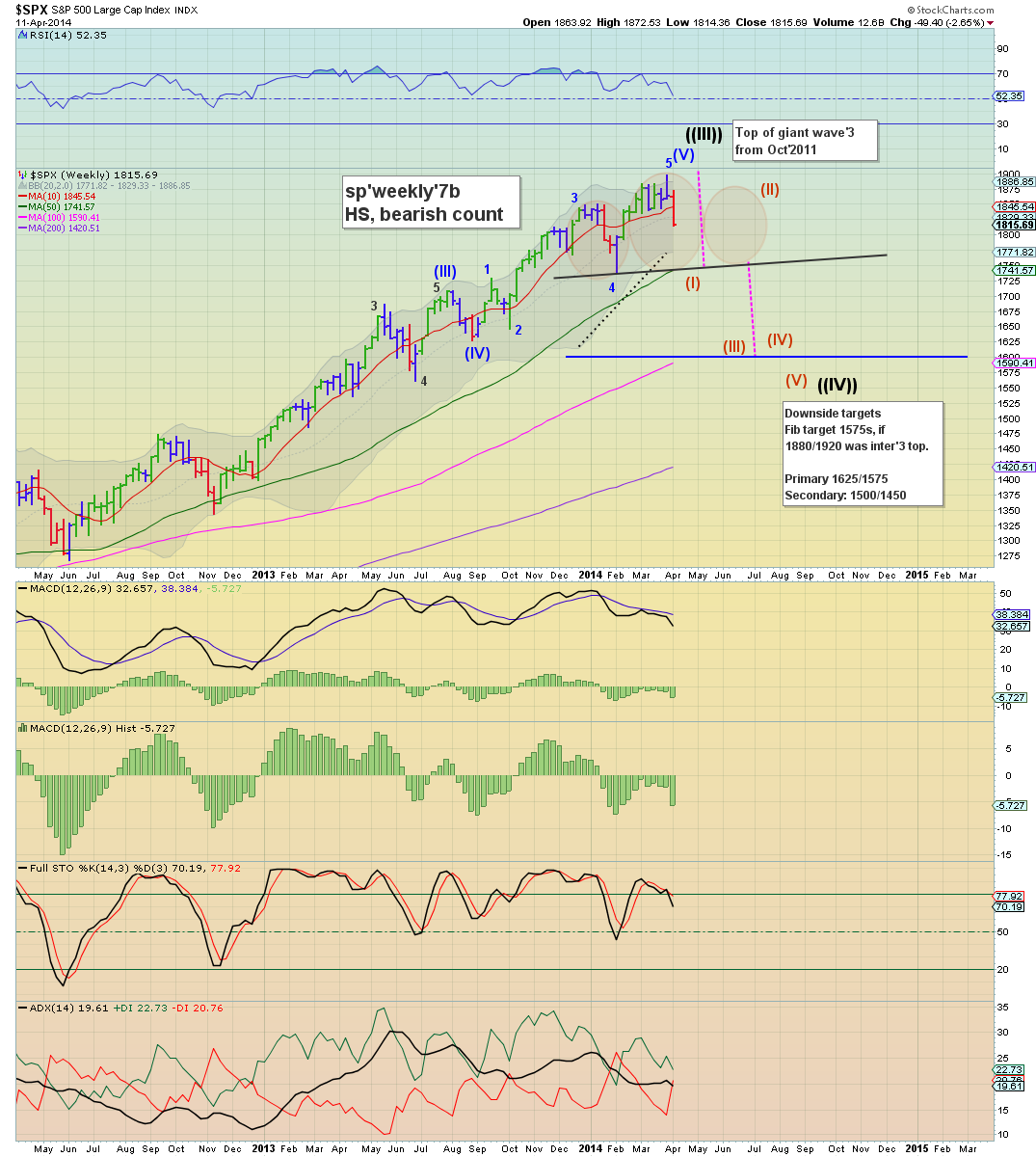 Anyone getting overly hopeful for a bounce next week (and 5/10pts higher on a Monday open doesn't count), should stare at the above chart for a good hour or two this weekend.

Equity bears achieved a VERY important weekly close, with a red candle on the 'rainbow' chart. Further, it was a decisive close below the 10MA.

Next obvious downside target (at least to me) is the lower weekly bollinger, with further support via the rising 50 week MA. Next week looks set to be another one for the bears.

Goodnight from London
-
*the weekend update will be on the US monthly indexes
Posted by Trading Sunset at 04:00:00
Email ThisBlogThis!Share to TwitterShare to FacebookShare to Pinterest 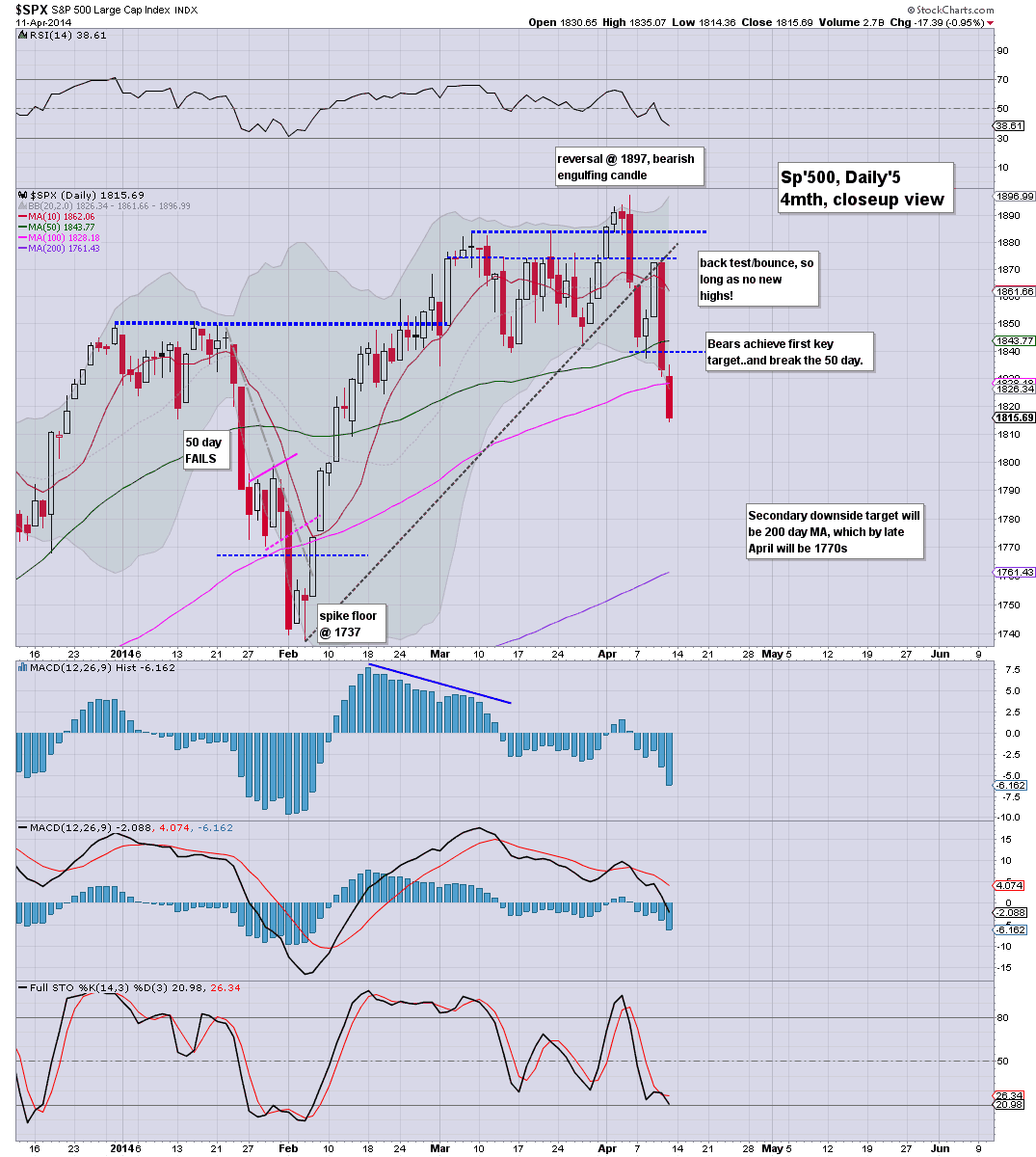 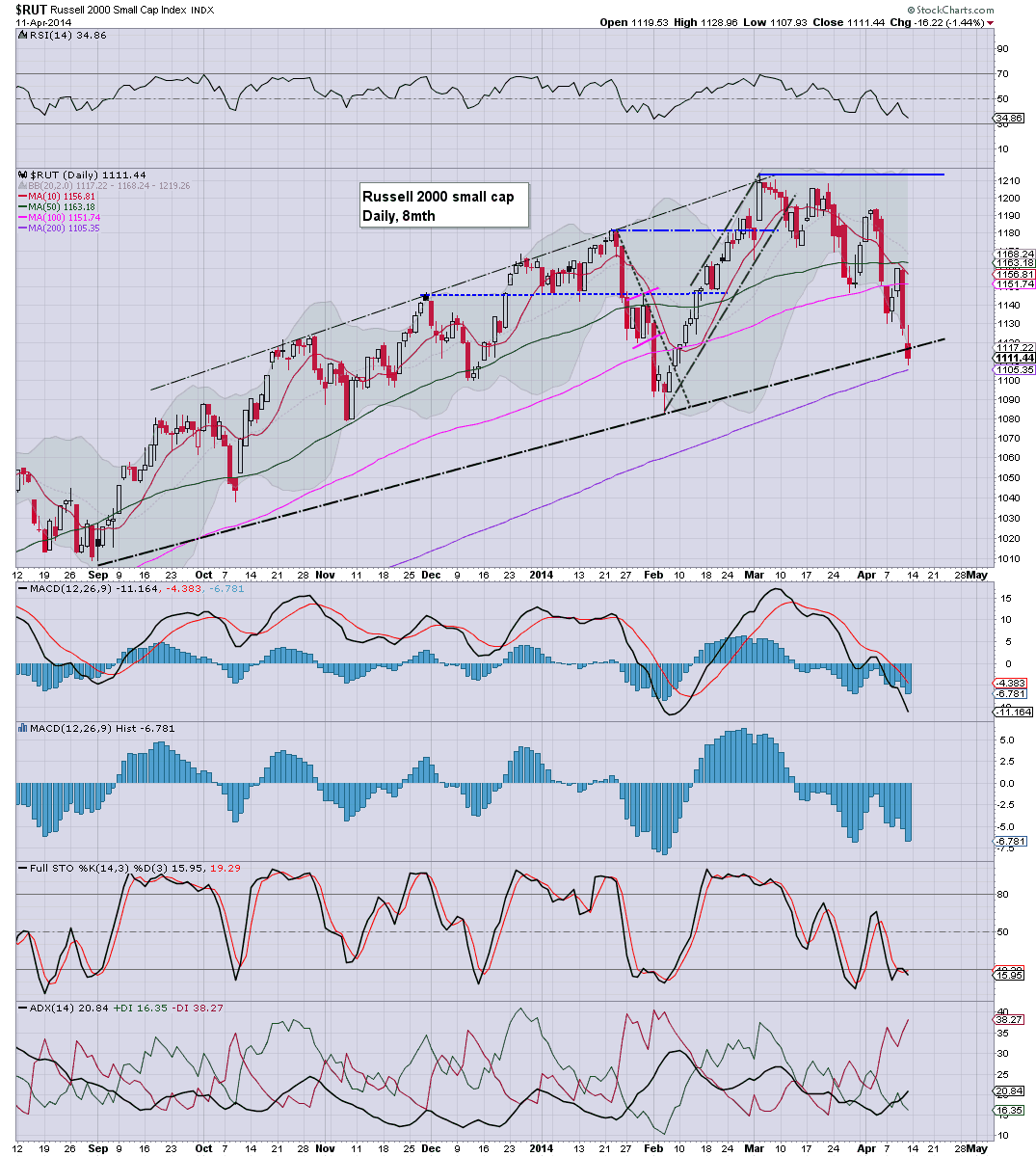 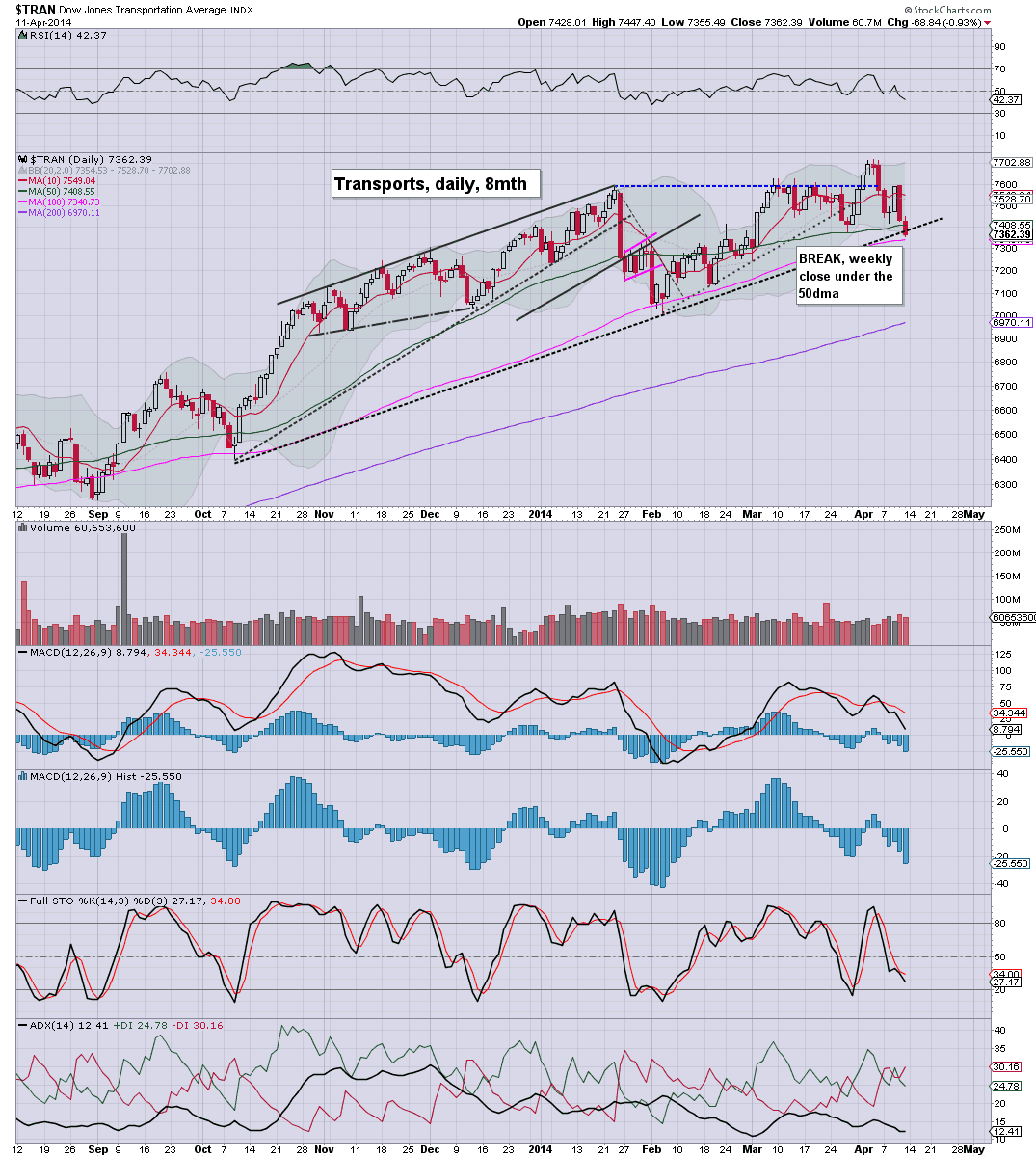 The daily charts continue to uglier by the day. There is NOTHING for the bulls to tout at the moment. Some are arguing that we are oversold and due a bounce, but hey..didn't we see the bounce Tue/Wed, and how did that work out?

The R2K and Trans have clear breaks of longer term trends, with the R2K is in imminent danger of breaking the 200 day MA.

I'm guessing the market will see further weakness for much of next week, with broad downside to the sp'1770/60s - where the 200 day MA..along with the lower weekly bollinger band are lurking.
-