After a very significant Friday decline, US equity indexes are somewhat mixed. Most indexes continue to hold the upward trend that stretches back to the Jan/Feb' lows. Notable exceptions are the Dow and NYSE comp', which are offering a hint that not 'all is well'. The monthly close will (as ever) be important. 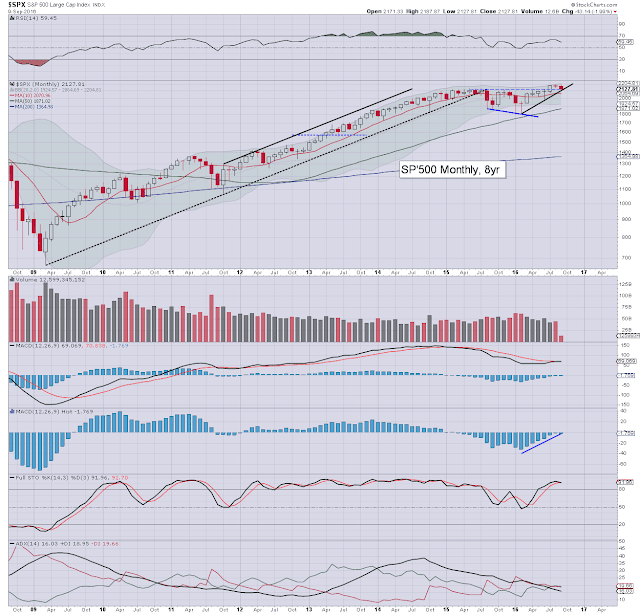 The sp' saw a new historic high of 2193 in August, and has been struggling to exceed it. There was a clear market break on Friday, with a great many support levels broken. Most important of all, the market settled the week back under the breakout level of 2134.

Underlying MACD (blue bar histogram) cycle has been flirting around the zero threshold for the past few weeks. With the Friday decline, we're back to fractionally negative. It won't take much of a rally to turn it positive though. Its not essential, but equity bulls should be seeking a Sept' close >2140/50.

It is notable that the upper bollinger is currently offering the low 2200s, whilst the lower boll' offers the low 1900s. The key 10MA is 2070, further weakness would see it fall to the low 2060s. A Sept' close in the 2050s would be decisive enough to sound alarm bells. 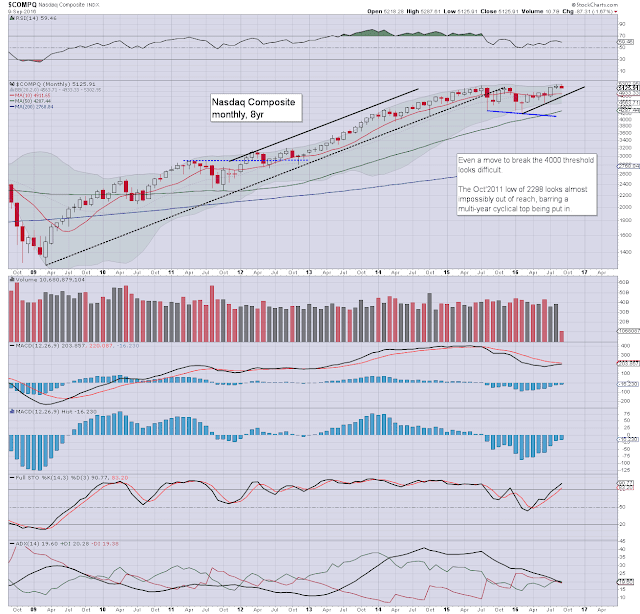 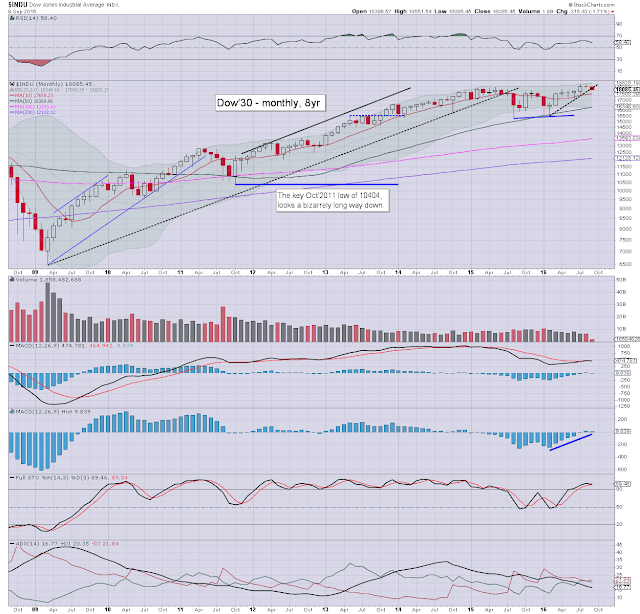 The mighty Dow is starting to not look so mighty, as its currently net lower for Sept' by -315pts (1.7%). First support is the 18k threshold, which after the Friday decline, is only 85pts away. If that fails, next support is the 10MA in the 17600s. There is already a slight break of rising trend, as the Dow is struggling to match the relative upside seen in the sp' and Nasdaq. Alarm bells should sound if the June-BREXIT low of 17063 is breached. 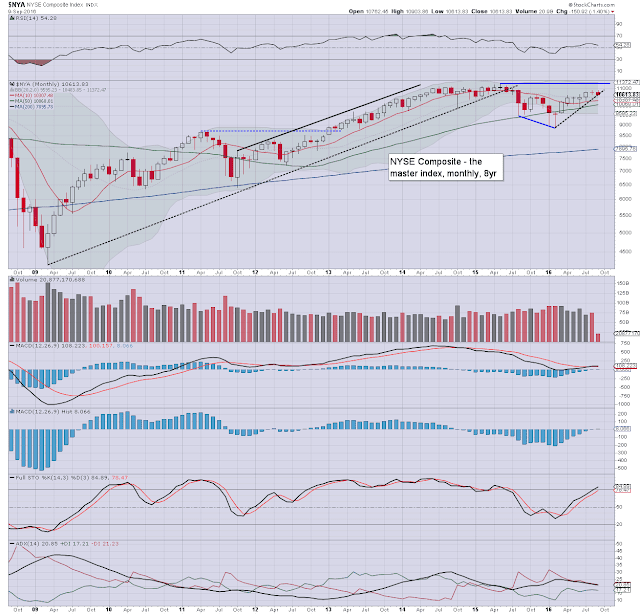 The master index - much like the Dow, is seeing a fractional break of the upward trend that stretches back to the Feb' low. First support is the 10MA in the 10300/200s, and then the giant psy' level of 10K. Any monthly close (whether Sept, Oct.. or beyond) <10K would bode badly for the broader market. 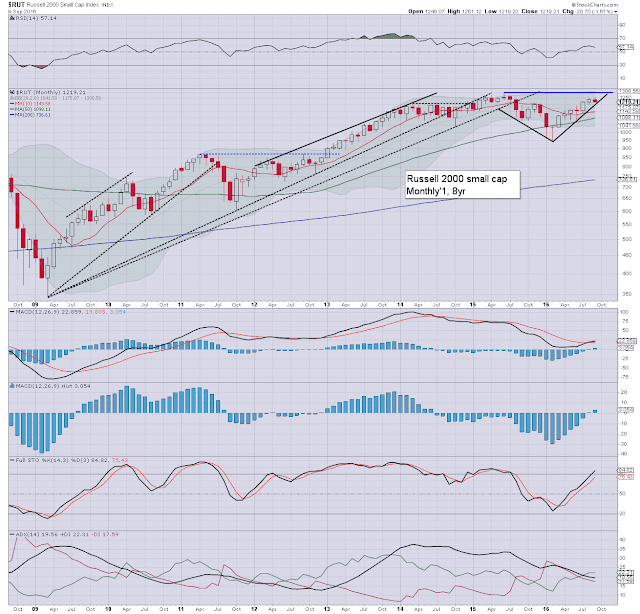 The second market leader - R2K, hit 1261 just a few days ago, a mere 35pts (2.9%) from the summer 2015 historic high. The Friday decline has caused some short-term problems. By end month, rising trend will be around 1210. Any price action <1200 would be decisively bearish. It is notable that underlying price momentum remains net positive, which is the most bullish situation since mid 2014. 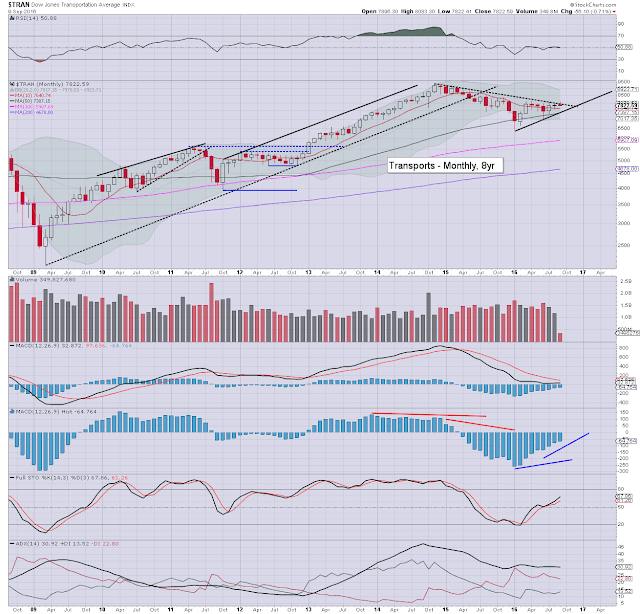 The 'old leader' - Transports, traded to 8083 on Thursday, the best level since April. Yet the Friday decline has taken the tranny back under the 8K threshold. Rising trend is currently around 7500... any price action under 7K would be extremely bearish.
--

The Dow and NYSE comp' are the first indexes to suggest the broader market might have a problem this autumn.

The Sept' monthly close will be extremely important. A close in the sp'2050s or lower would be an extremely bearish sign for October. Equity bulls should be content with any close >2100, preferably >2140/50.

Best guess: the broader US market, along with other world markets, resume higher into late Sept' - as the Fed still seem set to delay raising rates until the Dec' FOMC. That would be short-term bearish for financials, but the rest of the market should comfortably rally into Q3 earnings.
--


Fed/market chatter from the Schiff

Usually worth a listen... especially after such a big market move.
--

*fed officials Lockhart, Kashkari, and Brainard are speaking on Monday. With the usual 'blackout' period, that will be the last fedspeak until the FOMC announcement of Sept'21st.
--


If you have valued the posts on these pages across the last few years, then you can support me via a monthly subscription, which will give you access to my continuing intraday posts @ permabeardoomster.com.

We should have a very interesting and dynamic autumn ahead.

*the next post on this page will be Monday at 7pm
Posted by Trading Sunset at 17:00:00
Email ThisBlogThis!Share to TwitterShare to FacebookShare to Pinterest

Ugly end to the week 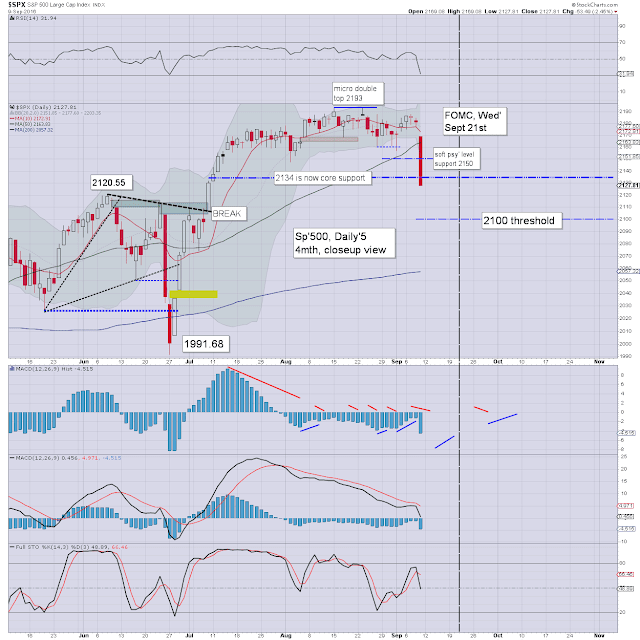 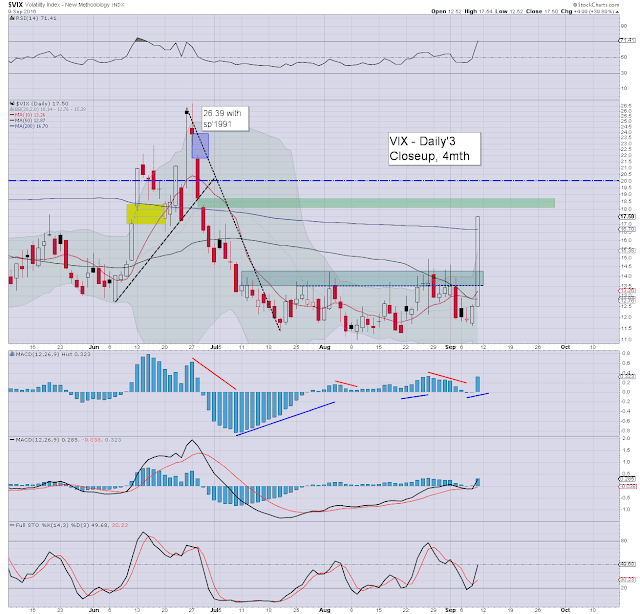 Well.... today was not as expected. There is no question that many - including yours truly, were surprised as the market systematically just kept breaking support level after support level.

Most surprising of all, was to see the market back under the breakout level of sp'2134. Other indexes have different equivalent levels, and are still holding comfortably above them. For instance, the Nasdaq comp' needs to break 5000/4950, which is another 3-4% lower.

Whether you want to blame an apparent nuclear test in North Korea, more fedspeak, or just 'overdue cyclical downside', it doesn't much matter. Today was a major wake up call to traders that summer is indeed over. The rest of the year won't be dull, not least with the added spice of an election.
-

As for the VIX, we've seen a massive swing from the Thursday low of 11.65 to a weekly settlement of 17.50. The key 20 threshold is clearly within range. It is highly notable that there is a minor price gap in the 18s, and its possible we'll max out there on Monday... assuming the sp' can stabilise within the 2120/00 zone.
-- 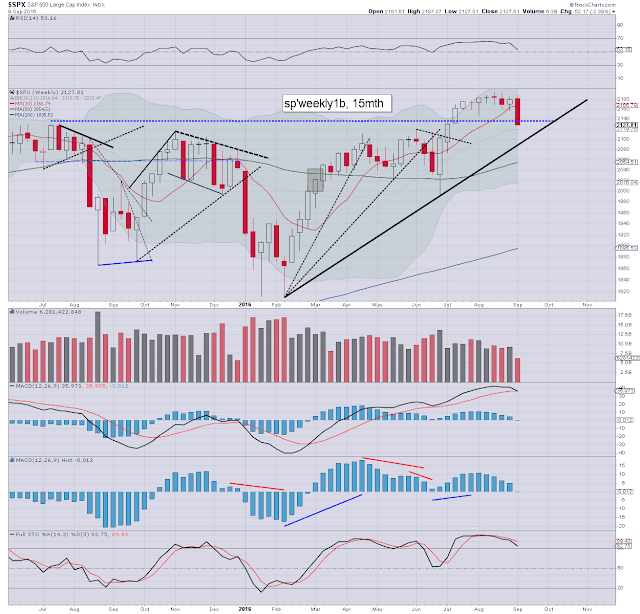 For the week, the sp' fell a significant -52pts (2.4%). We have a bearish MACD cross, which is the first since February. In some ways, the bears could argue today's fall is a more significant technical event than the two day BREXIT upset.
--


Has the sun set on the up wave from the Jan/Feb' lows?


Across next week, rising support will be around the 2100 threshold. It'll be damn important for the bulls to hold that, otherwise things could continue to spiral ahead of the following week's FOMC (Sept 21st) meeting.

As I have said for some weeks now, my mid/long term view would turn bearish on any price action in the sp'2050s, which would undercut the monthly 10MA.. along with the 200 day MA. Today sure was a surprise, but one big daily decline has not negated the broader upward trend.

*the weekend post will appear Sat' @ 12pm EST, and will detail the US monthly indexes
Posted by Trading Sunset at 00:00:00
Email ThisBlogThis!Share to TwitterShare to FacebookShare to Pinterest
Newer Posts Older Posts Home
Subscribe to: Posts (Atom)